A Lazy Gourmet Visit to Yvoire - one of France's Prettiest Villages

Summer this year was all pretty much last-minute.  On return from our New York visit,  the French parents-in-law were disappointed that us ‘Parisiens‘ hadn’t yet thought of visiting them in Provence in August.  So, with that said, we threw a few bags in the car, leaving plenty of space for eventual goodies from the local Provençal market (my list was longer than a bionic sunflower), and headed down the Autoroute de Soleil to Avignon.

As our plans were so last-minute it meant we could aim to follow the sunshine, hoping that the good people at the méteo weather centre hadn’t gone on holiday too.  You see, curiously, the normally radiant August sun in France was playing hard to get and the so-called Autoroute de ‘Soleil‘ was sulking under thick rain-clouds.  As we drove south, our goal was to leave the steely skies in the back mirror and so ended up taking a sunny detour via Haute-Savoie and the fresh air in the mountains of Provence-Alpes-Côte d’Azur.

One of the highlights of Haute-Savoie has to be the medieval village of Yvoire.  It’s right on Lake Léman, which separates France from Switzerland. “Make sure you reserve a table at Les Jardins du Léman and order the local catch”, advised Hervé, a wonderful gastronomic connaisseur and bon vivant friend.  So, not to disappoint him, we parked the car on the outskirts of the town and headed straight to our table.

Our table was on the top terrace where this secret ambience was hiding excited chattering, chilled rosé being poured and long platters of homemade frites.  Such a view was already enticing but the top terrace overlooks the lake and dominant Château d’Yvoire.  (Incidentally, you can’t visit it unless you know the owners: I need to work at networking, as my Mum has already placed her order for a Granny flat.) Back to the lake.  No wonder fish is what to order here.

What a menu!  Julie, who isn’t as fond as white fish as ourselves, changed her mind that afternoon.  With perch fillets sautéd in a creamy basil sauce and served with the thinnest, crispiest, homemade frites, what was not to love?  I took Hervé’s advice and was in seventh heaven with the Féra du Léman, the local freshwater fish with the most exquisitely-cooked vegetables and the best risotto I’ve tasted in a while.

Dare I say I couldn’t even manage dessert?  I mean, who could resist choux cream puffs, une Réligieuse in her iced crowning glory hiding a light vanilla pastry cream or the freshest of raspberry tarts?  The portions were so ample that I had to pass – but it just means that we’ll need to return to taste them!  Instead, we needed a walk to merit something at 4 o’clock goûter teatime.

The views and fresh air from the lake would surely work up a sweeter appetite.

Classy passenger boats on the jetty go to and fro the Swiss town of Nyon, on the other side of the lake.  I was content just gazing at the sailing boats.  In any case, there were too many clouds on the Swiss side…

The castle certainly dominates the landscape.  Imagine having your home on a restaurant’s business card?

It didn’t need much to spice up my afternoon when I saw this macaron sign on the Grande Rue – with even more exclamation marks than Mad About Macarons!

The girls and I tasted their chocolate and passion fruit macarons.  Delicious.  Apparently they produced the biggest macaron pyramid last year. On return home, I looked up their website but it doesn’t exist.  And I’ve looked everywhere on Facebook for them in vain.  Never mind.  If you can’t get to Yvoire, you’ll just have to make your own macarons like the French.  Just saying.

rows and rose of macarons!

Back to street meanderings, the girls couldn’t help looking into Crêperies and ice cream boutiques.

This boutique confirmed the latest trend: mixing alcoholic drinks with Red Bull.  Now there’s an idea for your macarons, my friends – mind-blowing!

Incidentally, have you tried my Pistachio, green tea and wasabi ice cream recipe yet?  It goes deliciously well with the same flavour of macaron (recipe is in the book).

As we sat under the shade of a giant fig tree, we watched others do like us: exchange ice creams.  Do you do that too?  We also reminisced that over the space of just a few hours, we’d had the most lazy yet gourmet and sunny afternoon. 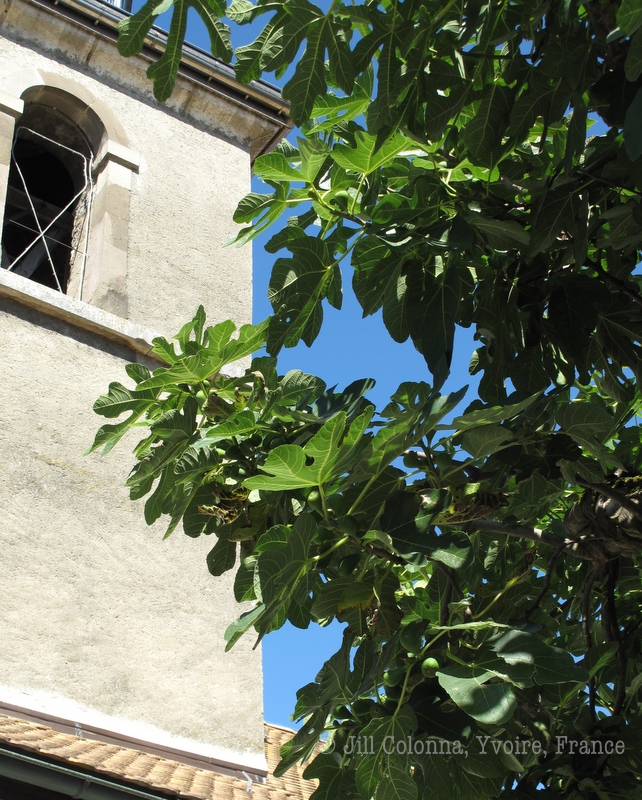 Speaking of lazy gourmet, have you tried this ridiculously easy recipe of roasted figs in Port?  it’s with honey and lavender. As we’re smack bang in the middle of the short fig season in France, go for it! Note: We were not guests anywhere here and all opinions are my own, as usual.  I’m just sharing our family holiday highlights.

Teatime •
The Heat is on: Pistachio Vanilla Wasabi Ice Cream

So glad you had such a wonderful vacation! I spent a fair bit of time on the other side of the lake in the mid-1980s but never made it over to Yvoire. Looks like I missed something special.

This is the first time I’ve heard about Yvoire. Thanks for the travelogue, Jill – MUST go there when we return to France next year. Thinking of holidays again already.

What a picturesque village! Lucky you finding your way to the sunshine and seaside!

Looking for interesting asparagus recipes? Serve them on ready-made puff pastry for the easiest dinner. Top with toasted hazelnuts or almonds.

Strawberries, rhubarb, asparagus and fresh herbs are in full season around France. Join me on my virtual market tour around the fruit and veggies.

Stay connected with the free monthly newsletter from Paris. Next coming out end May.