Happy, bubbly New Year to you! It’s good to be back. Let me say cheers to you with a glass of Kir Royal from Normandy.  Yet, just to confuse the matter, a Kir Normand is made with cassis, cidre and sometimes a touch of Calvados.  I’ll let you decide which Kir you prefer to toast in the New Year. 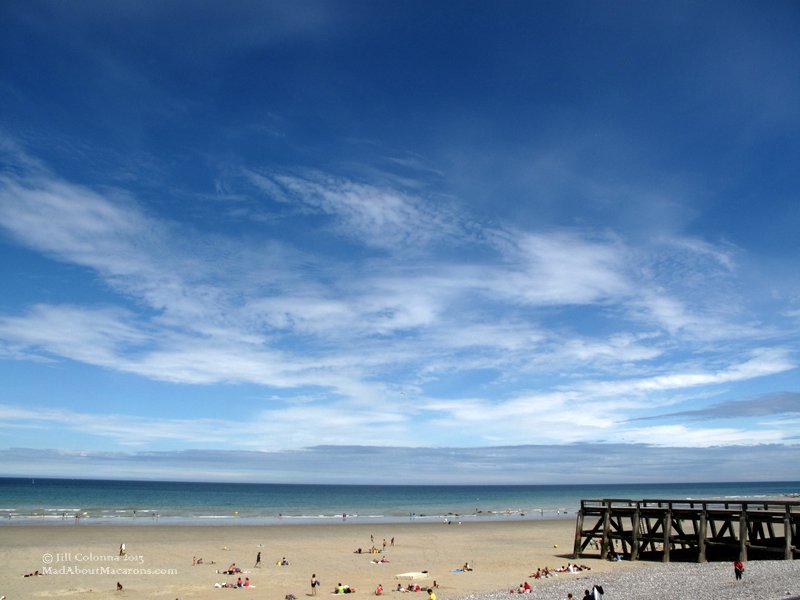 This shot reminds me of a typical Normandy beach scene by Eugène Boudin, where the sky dominates the canvas. Eugène Boudin was one of the first French landscape painters to paint outdoors – Claude Monet was his biggest fan. I picked that up at the Boudin exhibition in Paris last May at the Jacquemart André museum, before devouring a magnificent fraisier in the museum café (see more on this on my top Paris tea room guide), which inspired my strawberry and pistachio tart. But I digress.

Taken from his hidden grotto, this was Victor Hugo’s last view of the sea in 1884, according to a tourist information sign nearby.

This grotto was made towards the end of his life, as he often visited his friend, Paul Meurice, to work and contemplate the sea at his house, just metres away in Veules-les-Roses. I bet they supped plenty of watercress soup together, as this is also where the watercress beds are plentiful at the source of France’s smallest river.

Mid-morning, the row of beach huts in Veules-les-Roses nestled into the cliff’s terrace like a drowsy audience before the sea show. By midday, the ambience flipped to bubbling.

What is a Kir Normand?

Their weekend occupants had opened the shutters, brushed down the canvas chairs inside and laid out platters of local oysters on picnic tables while sipping on a Kir Normand apéritif. It’s a cocktail drink of local Normandy brut cider mixed with crème de cassis (blackcurrant liqueur). In some restaurants they also add a touch of Calvados liqueur.

While I tried the Kir Normand, I prefer Normandy cidre on its own, to let the flavour of the apples shine through. However, what about just the cider and Calvados?

The hedgerows of wild blackberries (or brambles) that line the coastal path in Veules-les-Roses best echo my kir sentiments; my favourite is a kir à la mûre (made with blackberry liqueur), which has something warming and festive about it at this time of year, whatever extreme, crazy weather we’re having.

When I first arrived in Paris – as lost as French francs were to finding my purse – I was amazed at the rows of enticing-looking cheap bottles of wine at our local Leader Price supermarket. The wines, however, were just as dry and acidic as the smile-less faces at the cash desk.

As I’d discovered the fabulous classic French kir apéritif made with Bourgogne Aligoté and crème de cassis, it was the happiest solution to disguise the rather sour-tasting white wines. Then, as I started to work, I was introduced to the cassis’ fruity cousins in Paris bars and restaurants: I could mix Aligoté or Chablis wine with framboise (raspberry), pêche (peach) or mûre (bramble).

The best ratio of crème de mûre (or cassis, pêche or framboise) to white wine in a kir is about 1:5, as it’s just enough to give a hint of fruit without overpowering the flavour of the wine. Let’s face it: you don’t want something overly sweet for an apéritif before a meal. In Burgundy, I was surprised to be served at least double the dose by our friends from Dijon – so it’s just a matter of personal taste.

For festive occasions, the kir’s decadent big, bubbly sister is the Kir Royal made with Champagne, but traditionally and best served with a Crémant de Bourgogne, dry sparkling wine from Burgundy.

When I followed Georges Lepré’s wine conferences in Le Vésinet last year, he had a lovely anecdote on Kir Royal. While he was chef sommelier at the Ritz until 1993, he was asked by Joan Collins for a Kir Royal with Roederer Champagne. Say no more. Don’t ruin fabulously expensive Champagne; enjoy it with a good dry brut without too much character – unless your character is stronger than the wine.

Laughter is sunshine that drives winter from the human face”

I would LOVE to sip a Kir Royal with you any time of the year. I’m not a big drinker but I’m willing to learn. 🙂

Oops. That’s another one. I stopped my husband from drinking coke but his family didn’t say anything about replacing it with something else. 😉

Cheers to a bubbly 2014 right back at you!!! I recent discovered kir royale, and I discovered I like it!!
And I’m loving your Normandy photos… I’ve never been. I’m intrigued by the photo of the beach huts? Are they rented, or do people own them? Just used for a day on the beach? I love the idea!!

Thanks for the photos, I’ve been experiencing a bit of wanderlust lately, and the only trip on my horizon is in about 2 weeks to Orlando for dance team nationals. It’s at Disney… and I’m not much of a Disney fan. But we’ll have fun one way or another!! Fingers crossed for warm weather!

Thinking of you with a Disney hat. Nope. Doesn’t suit you, Kim. You’re too classy, dahlink. These huts are funny aren’t they? I think it’s a mixture of both. In any case, they were sitting quite happily with their wee tables in front of them, glass of wine in hand and oysters; all very civilised! Thinking of Liv – good luck for the dance nationals!

Awe – thank you, Tony. Will do my best this year for you!