How to Make a Giant Pastry Ring for Christmas

This Christmas pastry ring sums me up just now: I’m going around in circles – but aren’t we all at this time of year?

My Corsican parents-in-law have already been and gone for our early French Christmas in Paris.  Their visit certainly speeded up the last few days of marathon shopping for holiday gifts and rustling up menus with fresh produce from the market; I’ve probably been looking like a perplexed turkey who’s lost the plot in Star Wars. 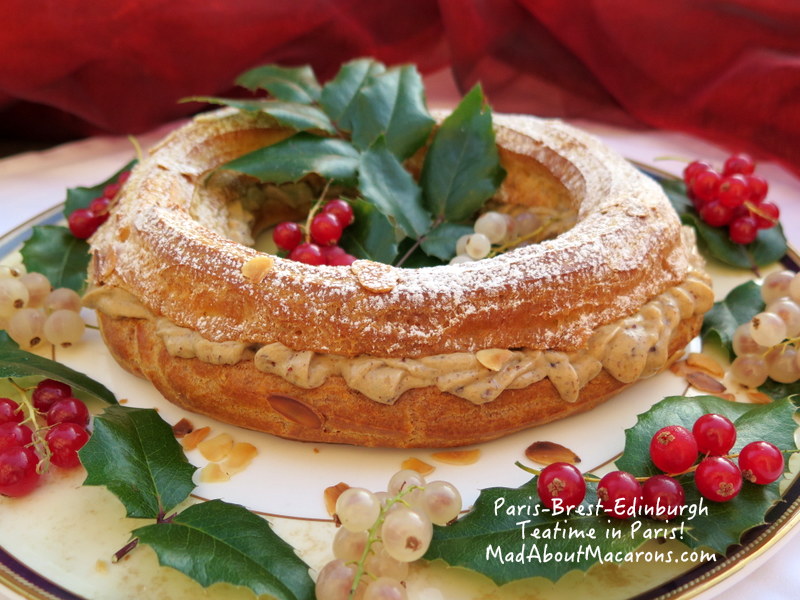 Before we know it, we’ll be flapping off to Scotland for my family’s Christmas gathering: pulling at our favourite British crackers together at the table, the more brave amongst us wearing their banger-sizzled contents of fluorescent paper hats and reciting the rolled-up corny but giggle-provoking jokes – especially after some toe-curling glasses of wine nectar.

The final blast of cheese after the Christmas Pudding still comes as a surprise. Bless Antoine; it has taken him a while to get used to dessert before cheese (and I am perhaps worse than him on this British custom after 24 years in France) but he’s cool and laps it all up – except Monsieur still refers to cranberry sauce (no matter how good, since he won’t even try) as turkey with jam or avec de la confiture.  Thank goodness Mum just laughs it off and has learned to shrug her shoulders like the French.

Traditions on the French side are slightly more serious at the table. My mother-in-law or Belle-maman always makes her two homemade bûches de Noël, or yule logs. I say always, as none of us have even contemplated breaking with this family ritual – that’s decidedly her territory. To avoid stepping on any toes in the kitchen, my answer is to make this large crown pastry ring version of the Paris-Brest, dressed up for Christmas with holly and red currants.  What’s more, I find it much less hassle and quicker to make than a yule log!

Paris-Brests are in many Parisian pastry boutiques these days, although I’m disappointed to see they’re more often served as straight éclairs.  If it’s a real traditional Paris-Brest, it should be in the shape of a bicycle wheel since it was invented in 1910 by Louis Durand, who concocted a giant choux wheel filled with hazelnut praline buttercream to celebrate the cyclists passing his pâtisserie in Maisons-Laffitte (just west of Paris) on their sprint up to Brest.

You can find my Whisky praline filling recipe for this Paris-Brest Christmas pastry wreath at The Good Life France. The recipe is an extract taken from Teatime in Paris: A Walk Through Easy French Pâtisserie Recipes.  This time I’m doubling the quantities and making an extra large Christmas choux pastry wreath.

For such a large circle, no fancy moulds are needed – just a plain but large piping bag (about 30cm/16 inches).

Once you’ve had fun piping out large circles to create a giant wheel shape, there’s no stopping you: you’ll find it just as easy to pipe out large numbers for birthday éclairs too!

First was for a good friend’s 50th with a mixture of a Paris-Brest and a giant 5 with strawberries and cream – then Antoine’s great aunt Raymonde was thrilled to bits on her 94th birthday this summer with two giant elderflower cream and fresh strawberry éclairs, served with a glass of bubbly as she looked at the recipe in Teatime in Paris, just back from the printers and smelling of fresh ink.  It was a great double dose to celebrate! 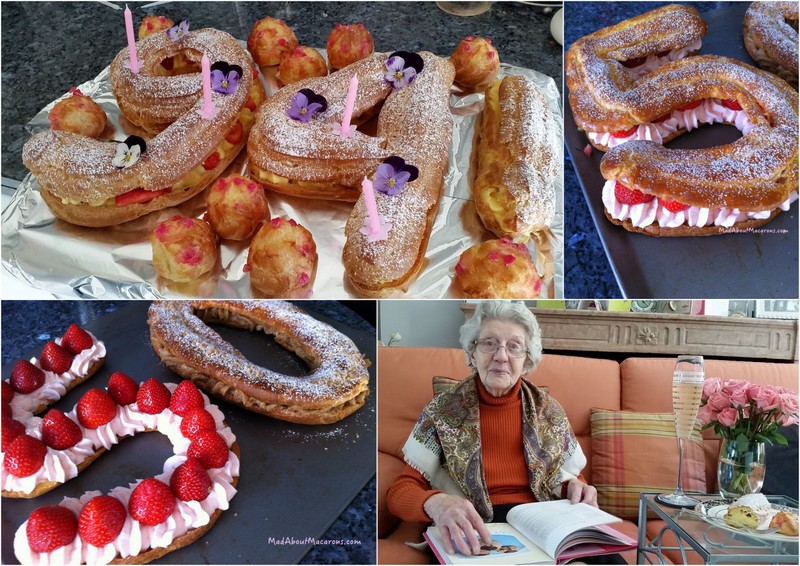 Just sketch out your circle or number shapes on baking parchment, cover it with another layer of parchment (so the dough isn’t in contact with the pencil), pipe away with two side-by-side layers then pipe out a third one on top, between the two. 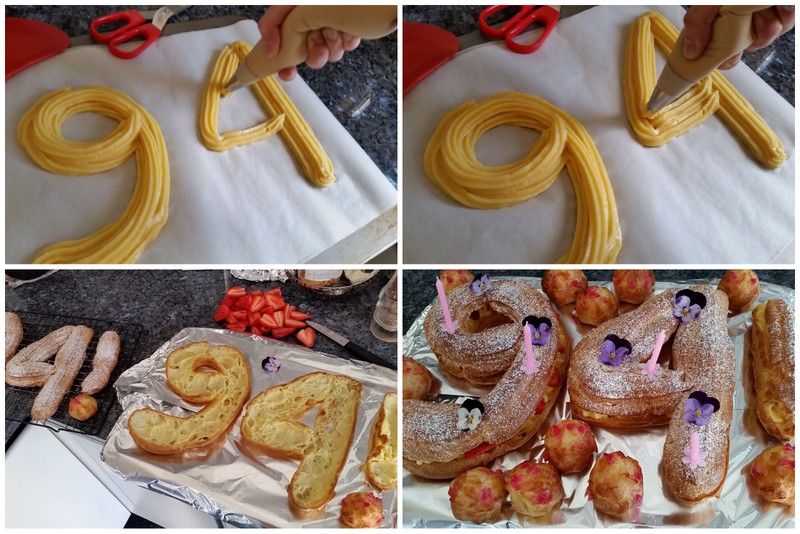 How to Make a Choux Pastry Wreath

Instructions in steps 4 & 5 are given for piping out the large pastry ring or Christmas wreath to make one large Paris-Brest choux wheel. Use this principle to pipe out giant numbers for birthday éclairs. When baked and cooled, split horizontally then fill with double quantities of the Praline filling from the mini Paris-Brests in “Teatime in Paris” or any other choice of filling.
(This is a slightly shortened and adapted version of the recipe, which is in more step-by-step detail in Teatime in Paris with its own chapter, including chouquettes, éclairs and Réligieuses.)

2. Once boiling, remove from the heat and quickly add the flour. Whisk until the dough is smooth and comes away from the sides of the pan.

3. Transfer to a mixing bowl (or electric mixer) and leave to cool for 5 minutes. Gradually beat in the eggs until you have a smooth, sticky paste. Transfer the mixture into a piping bag with a plain or star tip of 10-12mm. At this point, you can seal the pastry in a piping bag and keep refrigerated for up to 5 days.

4. Cover a large flat baking tray with baking parchment.  Using a pencil, trace out a circle of about 18cm diameter, with the help of a round plate (I do it free hand – it doesn’t need to be that perfect!) and cover with another film of baking parchment, so there’s no direct contact with the pencil marking.

5. Pipe out the dough following the first 18cm circle, then follow with another circle right next to it in the inside.  Finish with a third circle superposed on top, nestling in between the two rings below.

6. Sprinkle with almonds on the pastry ring. Bake in the oven for 35-40 minutes until brown – and don’t open the oven door at all during the process, otherwise the pastry will fall. Just wait until it’s well browned.

7. Leave to cool on a wire rack then using a bread knife, cut through the middle horizontally and fill with the praline buttercream or any other filling of your choice, such as this pistachio cream and top with fresh berries of your choice. 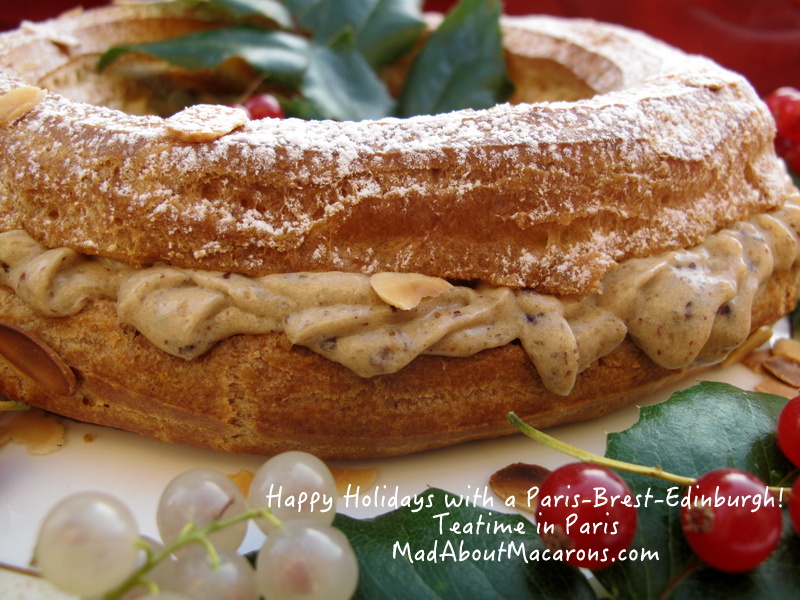 Before you go, you still have time to enter the international competition to win a copy of Teatime in Paris! Just click here to read the FREE 2015 Christmas Issue of The Good Life France Magazine and turn to page 55 and click on the book cover for Teatime in Paris!  Update: This giveaway is now closed.

Thank you so much for your support and comments here on le blog and for following my everyday galavanting in and around Paris. I’ll be back here after Christmas with more festive recipes and travel stories. In the meantime, you can still find me on Instagram – starting with a book-signing and carol singing at the British Embassy in Paris tonight …

and don’t forget you’ll find tons of delicious French pastry recipes in my book, Teatime in Paris – it’s a perfect gift that keeps on giving! 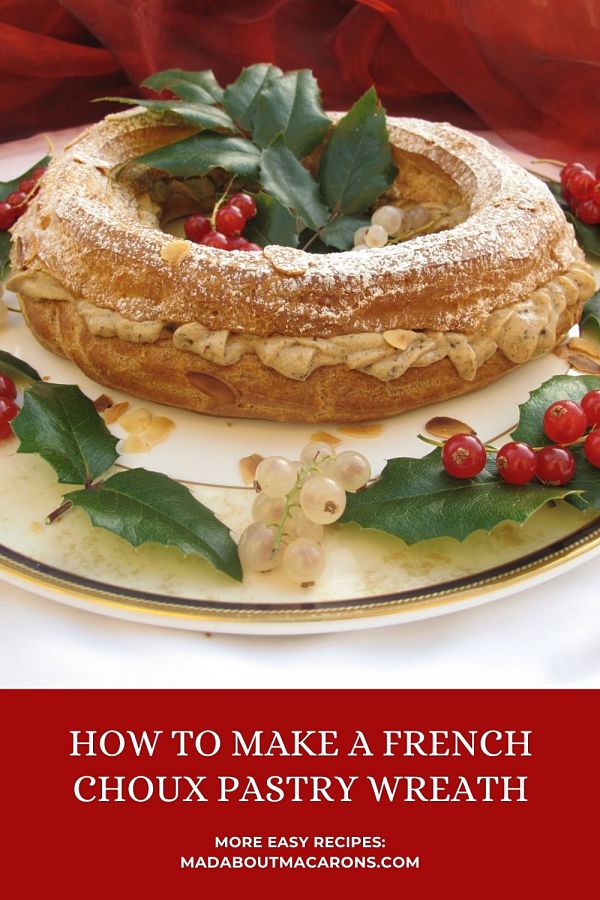 Love your information on the French Macarons – I just posted my images of the macarons I enjoyed while in Paris.

Thanks Christie – glad you liked them!

This is such a lovely presentation of a Paris-Brest and great idea. Must try it – the birthday éclairs are super. Wishing you and your family a very happy Christmas.

For some weird reason this post didn’t go out on Feedburner to alert subscribers. It’s a sign I need to get moving when I return and create a newsletter!
Thanks for your lovely words, and all your support this year Jean-Pierre. Happy Christmas!

Jill, this is such a beautiful and festive Christmas dessert! I have never made such a big one, as I only make individual choux pastries. I’m also intrigued by the pistachio cream filling! I may just have to try one myself! Thanks for the inspiration!

Thank you Christina. I also love the individual ones as they’re easier to make and just done in a single swirl but the big wreath is handy for special occasions – at Easter time make it into a big nest!