When I found myself preparing photos for Mad About Macarons within a short deadline, I wanted something a bit different for a pistachio macaron shot. Tossing in my sleep one hot night I hit on an idea: ice cream? I rushed first thing next morning to our local Gelateria Amareno in St Germain-en-Laye, asked the owner if I could borrow an ice cream cone stand and ran off with it – leaving him with a cheque just to prove I’d return it. He thought I was NUTS. Little did he know I was almond and pistachio nuts and definitely mad about them in macaron form. 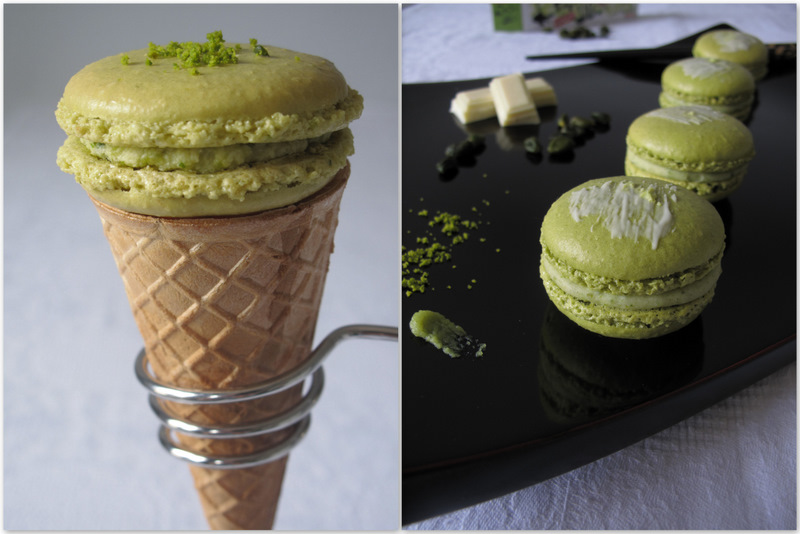 As many friends, family and colleagues would tell me they couldn’t even attempt to make macarons as they were difficult, I was on a mission to help combat their macaron stumbling block. The aim of the book is therefore aimed at beginners to get perfect macarons with simple instructions. This means keeping the recipe straight forward too. For the pistachio recipe, the pistachios are all in the filling: the ganache or cream rests in the shells for at least 24 hours before eating them so that it permeates into the shell, making the whole macaron take on the flavours and take on a wonderful fondant finish inside.

Tip: Almonds are the least oily of nuts and easier to work with for making macarons. As pistachios – like other nuts – can be oily, I would recommend if you’re going to use ground (unsalted) pistachios in the shells, to substitute a third of the ground almonds for pistachios (or other nuts.) 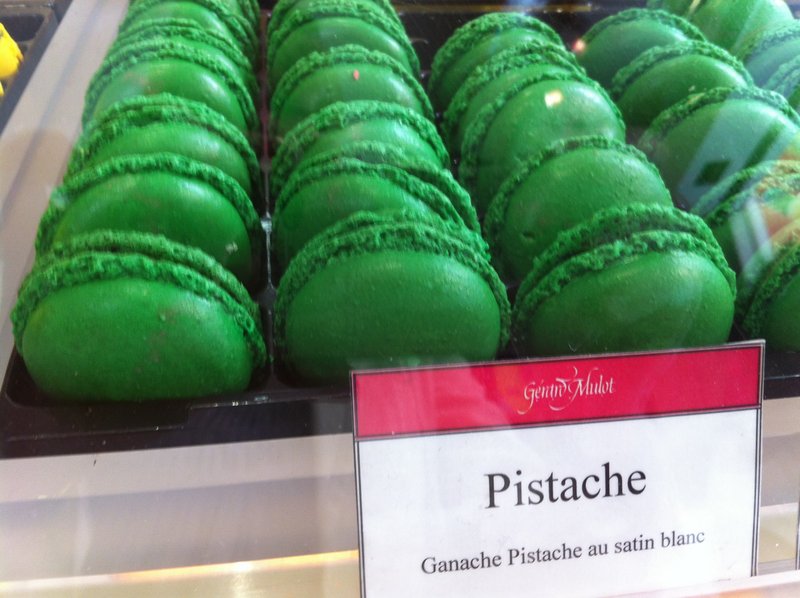 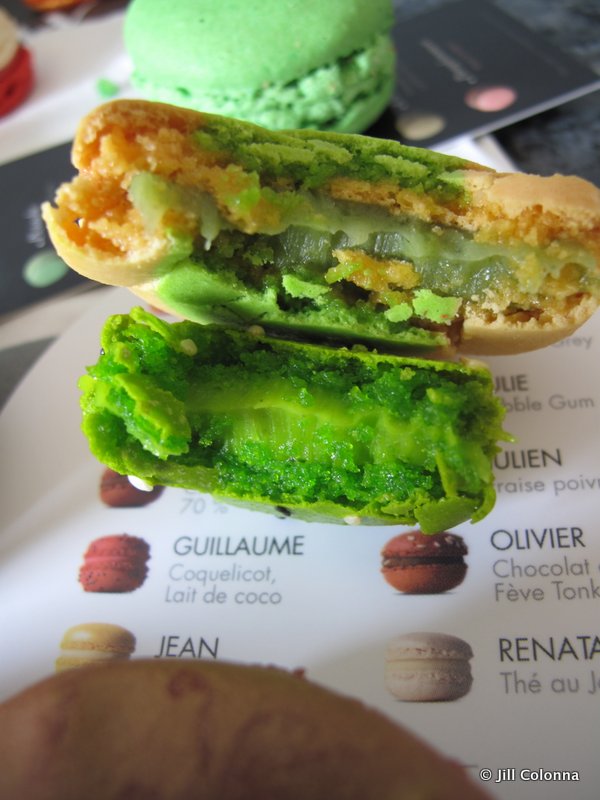 Not completely pistachio, but if you’ve tried Hermé’s Mosaïc macaron, you get the pistachio in between cinnamon shells and with a black cherry that winks at you. Great for cinnamon lovers, since it stands out plus the pistachio colour is pistachio. 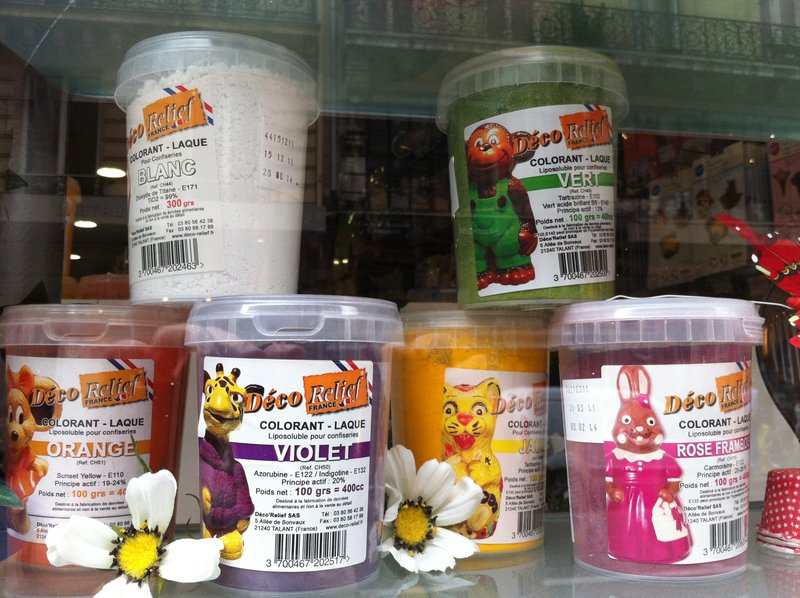 So what colouring do I use? I prefer powdered colourings, as a tiny amount is needed in comparison to liquid colourings, which can affect the meringue if you add too much liquid. For pistachio, use a good pinch of green colouring with a tiny pinch of brown or caramel to soften the green. (I say a pinch, as so little is needed. You’ll see for yourself: if you use a teaspoon or even half, it’s too much.) 3 parts green to 1 part brown or caramel colouring.

Previously, I ordered powdered colourings at meilleurduchef.com and at MORA in rue Montmartre in Paris – until I discovered Déco Relief just across the road from Mora. The staff are delightful and eager to please, which in my book deserves customers. So, my friends, I recommend you pop in to see Djamel at Déco Relief, 6 rue Montmartre, and tell him I sent you. His colleague is a great fan of Glasgow in Scotland! Yes, like the Scots, they are chatty.

As Antoine isn’t a fan of cinnamon, he asked just for plain pistachio macarons the other day. Nothing fancy but they were delicious. 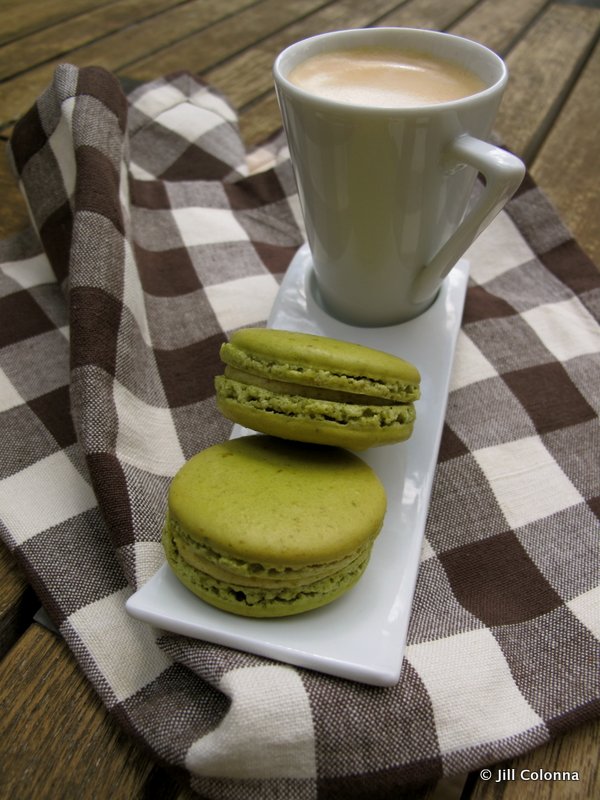 30 responses to “Colouring and Pistachio Macarons”