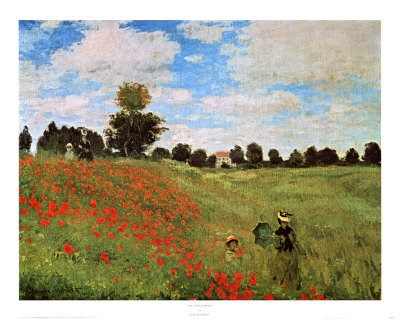 Monet painted Camille and Jean strolling amongst the poppies near Argenteuil – not far from where we live.  I couldn’t stop thinking about Monet’s impression of the poppy field as we took a drive to the country recently. En route, poppies were out in all their glory – fields upon fields – to say bonjour. 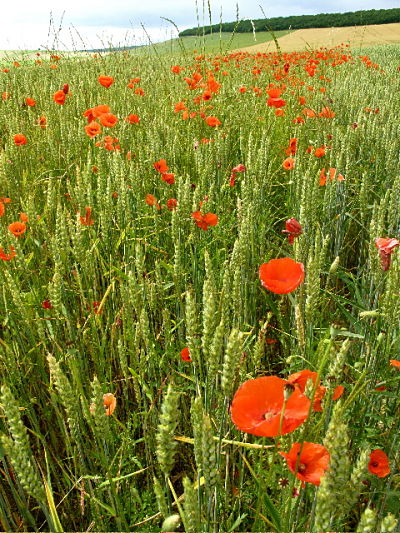 There was this urge to make French poppy macarons as soon as I got back home.  I had found an intense poppy essence (arôme coquelicot), which was like tasting pure bonbons as a child. 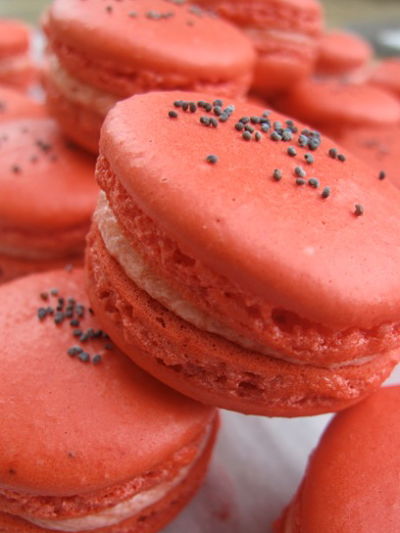 As the poppy flavour was so sweet – and it’s still the rhubarb season – I added a touch of rhubarb compôte.  A classic is to pair poppy with strawberry, but the rhubarb just gave that tiny touch of tartness that brought out all the memories of poppy coquelicot sweeties. 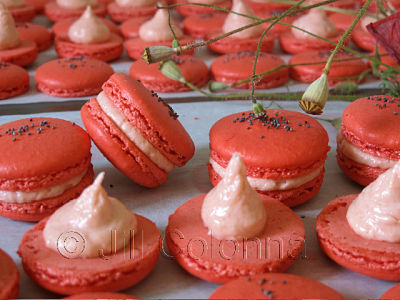 Some poppy macarons with a touch of rhubarb 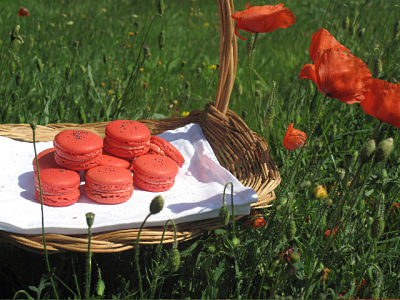 The recipe for poppy and rhubarb macarons are in my second book, Teatime in Paris. 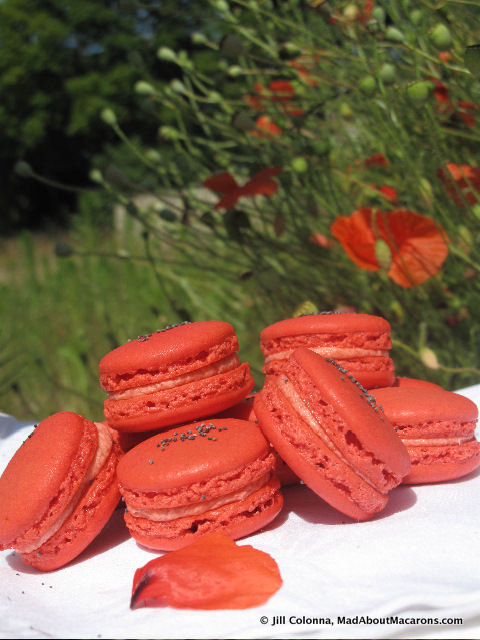 Visit to Pain de Sucre Pâtisserie in Paris with ParisPâtisseries

Join us on our mad macaron adventure at Pain de Sucre Pâtisserie in Paris.  I recently went with Adam Wayda of Paris Patisseries fame, to watch them making macarons using their new macaron-making machine.  Please don’t forget that this is on a large scale (about 2000 macarons a day) and don’t let that put you off making them yourselves at home.  Remember, they are a lot easier than you think!

Last Summer on holiday in France I discovered that Coquelicot was not just a pretty flower but also a flavouring. We first had it at breakfast as a jar of jam – the famous Coquelicot de Nemours – then later as a ‘feature’ flavour of ice cream in one of the Flunch chain of restaurants. I tried in vain to buy a jar of jam – sweet and very floral – and will be trying again this year as we pass near Nemours. I saw a bottle of extremely expensive flavouring syrup in an upmarket tourist shop but it does seem rather elusive. The only type I seem to be able to find online in the UK is for aromatherapy type poppy scent rather than culinary essence. Is it online only or can you suggest which type of shop in France I should go into?
How did you get the wonderful red. It is such a brilliant (literally) colour match – I can only imagine how wonderful the macarons tasted!
hopeeternal
‘Meanderings through my Cookbook’

Lovely to hear from you. I agree about the prices: if you get the syrup, they just use “arôme” in it anyway. I linked to it in the post, via Meilleurduchef.com. That’s where I get my extracts/aromas and the powdered colourings for the kitchen.

How did I miss this post!? I’m so sorry I’m behind – I checked egg yolk recipes but I’m behind in reading this post. I love poppies and these macarons are GORGEOUS! I’m always amazed how you match the color you like. It’s impressive. Now I only wish I can have a bite of those yummy macarons…

I always think of that painting when I see fields of poppies too. That, and a wallpaper I had in my bedroom when I was little (Laura Ashley, obviously!) I have no idea what poppy essence tastes of (or that it existed) but I imagine it’s lovely with the rhubarb. I’m desperate to try it now!! 😀