Paris’s Chocolate Salon happens once a year – always around the month of October. Just when the weather starts to tell us we need hot chocolate, chocolate bars, chocolate éclairs and, of course, chocolate macarons.  Let’s just concentrate on the macarons, which were all over the exhibition.

It took my talented artistic American friend, Carol Gillott of ParisBreakfasts, to entice me along finally to the Salon du Chocolat in Paris. Was I too busy making macarons? Perhaps more because it’s at Porte de Versailles, an area that’s a nightmare to park and with all the exhibition halls for someone with no sense of direction, it’s like suffering an orienteering course for a sports exam when it’s not your sport. Arriving seriously late with a lame excuse of being too nice in traffic jams, she was an angel to still take me under her wing.

Who was more mad about macarons? Check out Carol’s eye-catching gear of tee-shirt and matching macaron bracelet. Not difficult to lose her – although she might tell you the opposite. Each stand visited, we were greeted with “Superb T-Shirt!” followed by more chocolate tastings, thanks to her tasting plan.

Carol knows a thing or two about Paris fashions – not surprising, as she has the artist’s eye. Macarons are definitely à la mode (by that I don’t mean the American ice-cream on top, I’m talking trendy Parisian fashion here.)

Another necklace – this time just like her bracelet, plus macarons dotted around the dress.

Should I perhaps give some macarons to the French fashion creator, Jean Colonna? We could create Le Colonna macaron dress. Just an idea…

A rather foxy (get it?) macaron-shell tower in all its glory by Gregory Renard and then his Eiffel Tower of macarons…

While we’re gazing at the Paris monuments, what about l’Arc de Triomphe by Léonidas?  It’s the one time I can negotiate the traffic around it without needing a bumper or aspirin.

Then a tasting over at Arnaud Larher‘s stand, even if the taster macaron bits were so near yet so far behind the counter.  Pain d’épice (gingerbread) and orange. What a gorgeous filling texture, although I didn’t really get the orange, sorry.  Hm – what’s that electric green colouring for pistachio? Never mind, it’s delicious!

There’s also a Professional Salon du Chocolat downstairs, including packaging, equipment and all kinds of tricks for the trade. This macaron-making machine might be rather bulky for the kitchen, n’est-ce pas? It also looks rather complicated but worth it if you need to make macarons in their thousands daily. Give me the simple piping bag any day.

Meanwhile, time to check out the World Chocolate Masters 2011. It’s serious business between the top chocolatiers strutting their stuff until something catches my eye in the audience. I should really learn to concentrate.

Imagine this blissful scene: somebody is just sitting with their arms out, holding these miniature macaron beauties.  Of course, I asked if I could try just one since I LOVE macarons. Wouldn’t you do the same on seeing this sight?

This was a Grand Marnier mini macaron, with a macaron shell on top of the most exquisite chocolate by Spruengli in Switzerland. What lovely people!

Then came Sébastien Bouillet, chef patissier from Lyon. His speciality?

It was with his Macalyon that I was inspired with a chocolate macaron for my first book, Mad About Macarons. Except I only dipped it half in dark chocolate. Now Christophe Roussel also does it.

Just as well I’d made more chocolate macarons back home for dessert. Recipes in my books! All this chocolate is making us crave more. What about you? 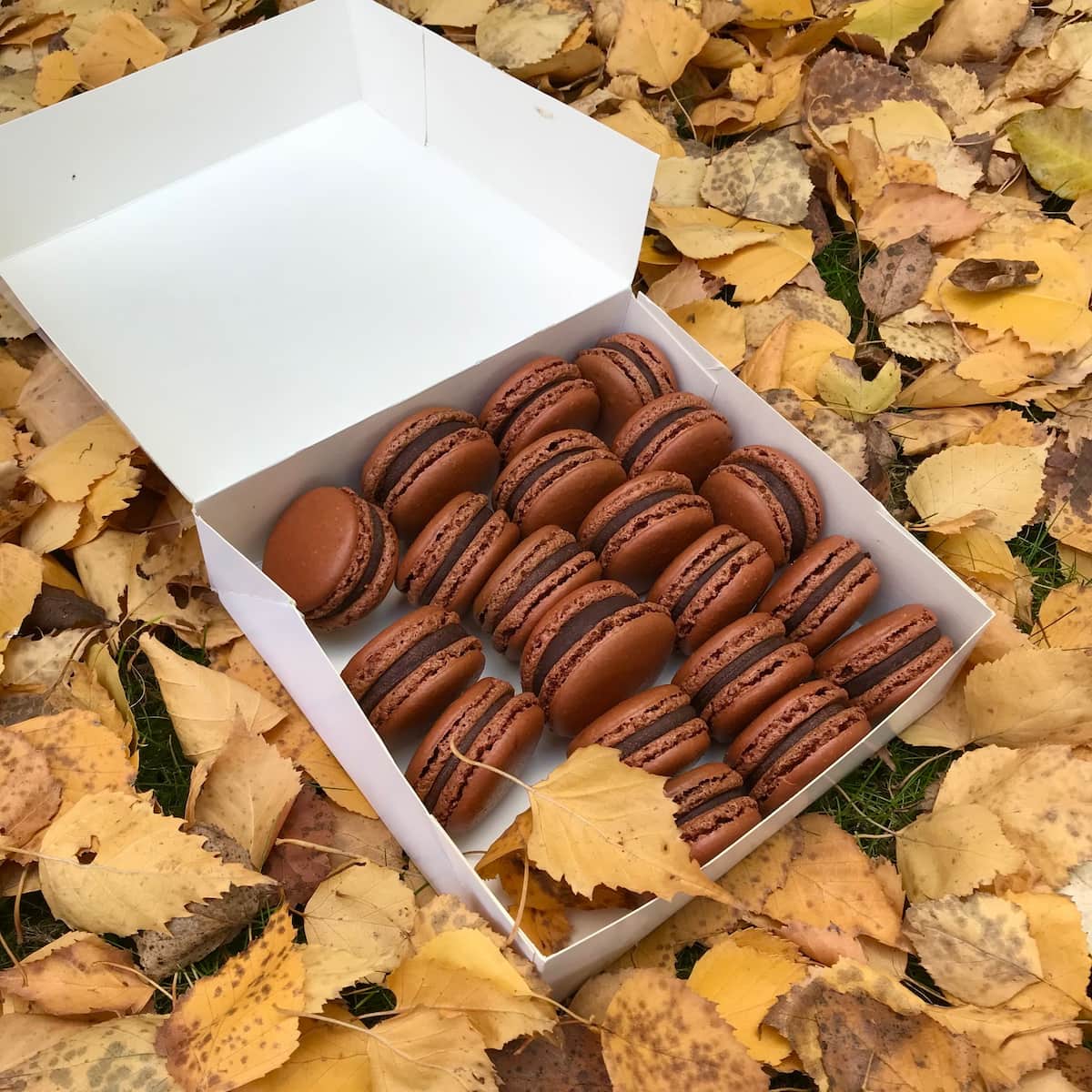 I am now officially hungry 🙂 And officially want a macaron! Or chocolate. Or both.

OMG *I* want to go to the Salon du Chocolat one day! I can’t believe I lived all those years in Paris (pre-blog of course) and never once went 🙁 Thanks for letting us live vicariously through you and Carol!

I was just like you – still don’t know why it has taken me 18 yrs to get there but it was worth the wait. What a ball with Carol. I’m still discovering some wee chocolate surprises that she sneaked in my bag. Priceless!

I think I shouldn’t have checked your blog so early in the morning. i’ll crave macarons and chocolate all day and maybe all weekend. Everything looks spectacular Jill. Oh, why am I not in Paris to be a test tester?

Roxana, you’ll just have to come over next year!