Looking for the best French tea brands in Paris? Then don’t leave Paris without visiting the historical Theodor tea shop. Near Trocadero’s famous spot to photograph the Eiffel Tower, it’s near this hidden gem where we buy good tea. What’s more, their tea tins are collectable chic. 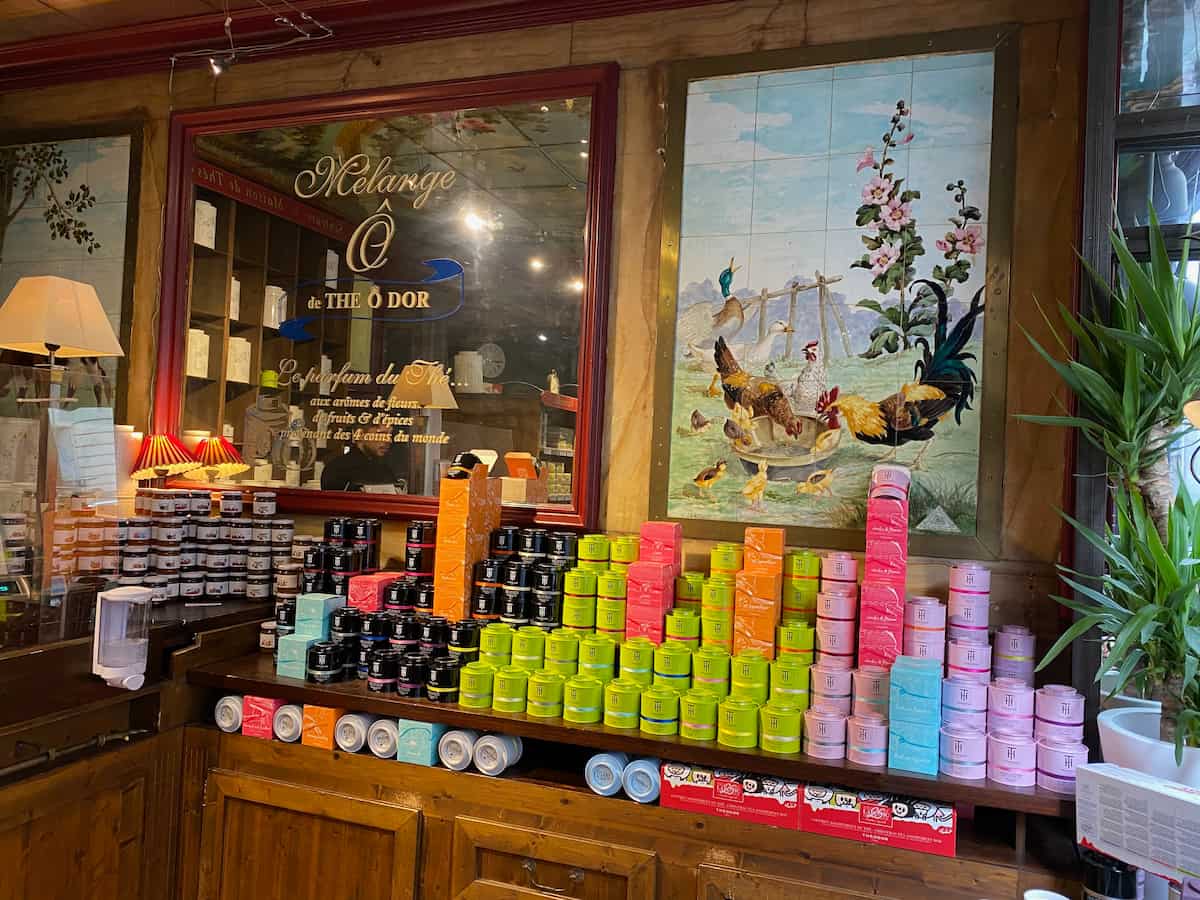 Theodor, One of the Best French Tea Brands

I fist discovered the teas of Theodor Paris in 2015. Thanks to my friend, Francis, after he introduced me at the Absolu Oolong’s launch at the Palais Tokyo (read my article all about it), I was hooked.

As a British tea-drinker of mainly English Breakfast, Earl Grey and the occasional Rooibos back then, discovering the Absolu Oolong was just the start of a new French tea adventure. Since then, I now buy this unique, aromatic green tea every year, as it goes so well with food – particularly cheese, plus this cheesy Onion Tarte Tatin! Plus with their beautiful Advent Tea Calendars (sadly, they no longer make them but they instead have Christmas teas), they let me taste a whole new world of the finest French tea in the run-up to Christmas.

Like drinking good wine, Theodor’s speciality teas have helped me to appreciate teas’ deliciously complex aromas. Moreover, I now take the time and pleasure with my cuppa. I know, this sounds corny but it even evokes a smile. Now, after having experienced a Japanese tea ceremony in Japan, I understand more of the inspiration and spirit behind the Tea Master. 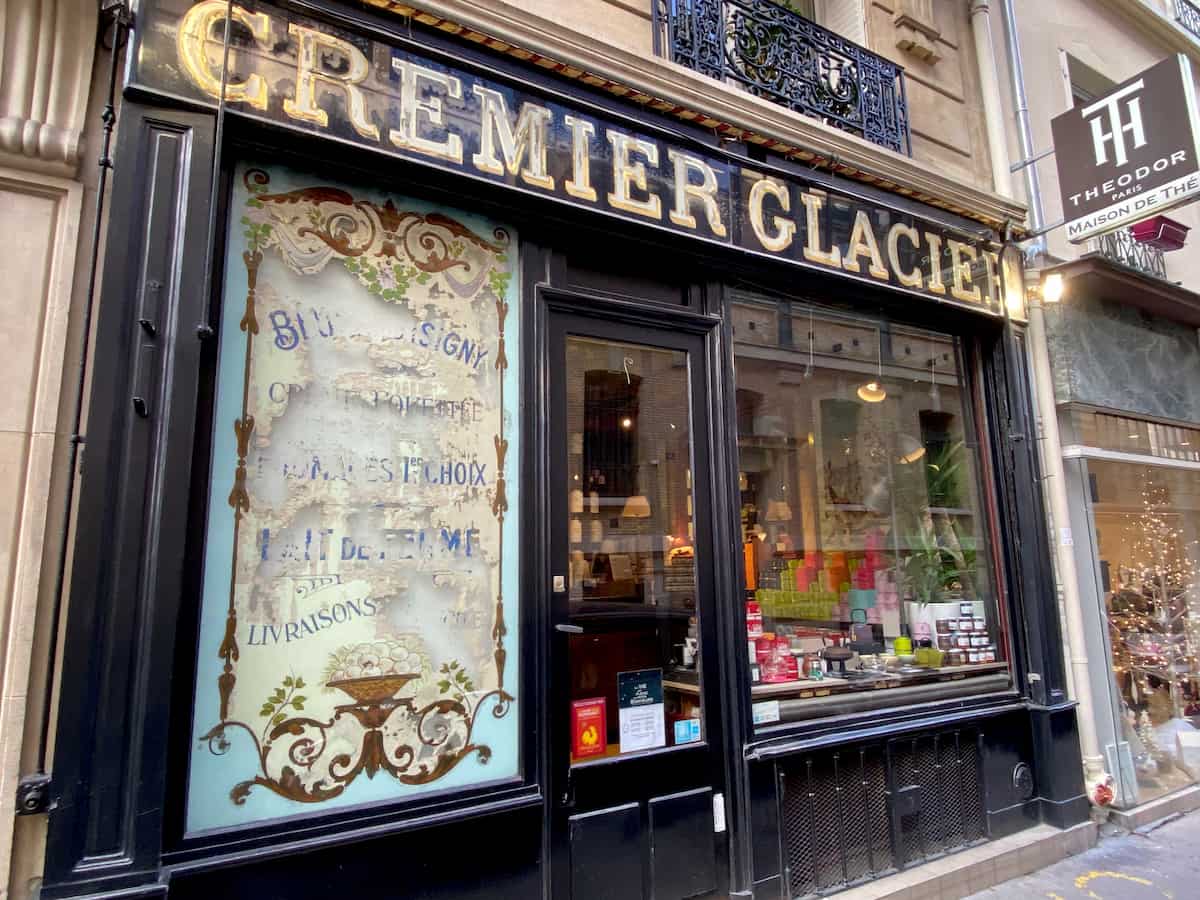 If you’re looking to buy good tea in Paris, then you’re in for a bonus on rue des Sablons (16th arrondissement). The shop is also a historical building. Previously a creamery from the late 19th century, the decor is still testament to such a location with the ceiling and wall panels by Anselm in Rue du Roi Doré (golden king street) in the 7th.

This is where Tea Master, Guillaume Leleu started up his first shop in 2002. Since then has been taking the tea world by storm with his Parisian Theodor creations, now in 30 different countries.

Each year about 100 tons of teas personally selected from around the world (mostly from Asia) are transformed in his zen-like laboratory in the previous Singer factory in Bonnières sur Seine. Within rowing-boat distance from Monet’s gardens at Giverny, I’ve dreamed of stocking up on tins and rowing away, Monet style, down the Seine, back to Paris.

Calling himself the Insolent Parisian, Theodor’s founder, Guillaume Leleu, has us travel with him. His poetic tea descriptions finds beauty in everyday things, embodying the art of tea.

The inspiration of the Impertinent Parisian is embodied in sixteen essences that form the aromatic tea palette in an impertinent and poetic way. Impertinent, because it tempts us to take a shortcut and welcome the unexpected. Poetic, because it makes us discover shifting horizons and jostles our view and senses, provoking us to a game of desire and astonishment in disguise, while inviting us to marvel in front of the revisited daily Parisian routine.

Such essences are represented by colourful satin ribbons that make a statement around each of the characteristic tea tins – containing teas of origin, black flavoured teas, green flavoured teas, infusions named “weeds” or herbal teas. 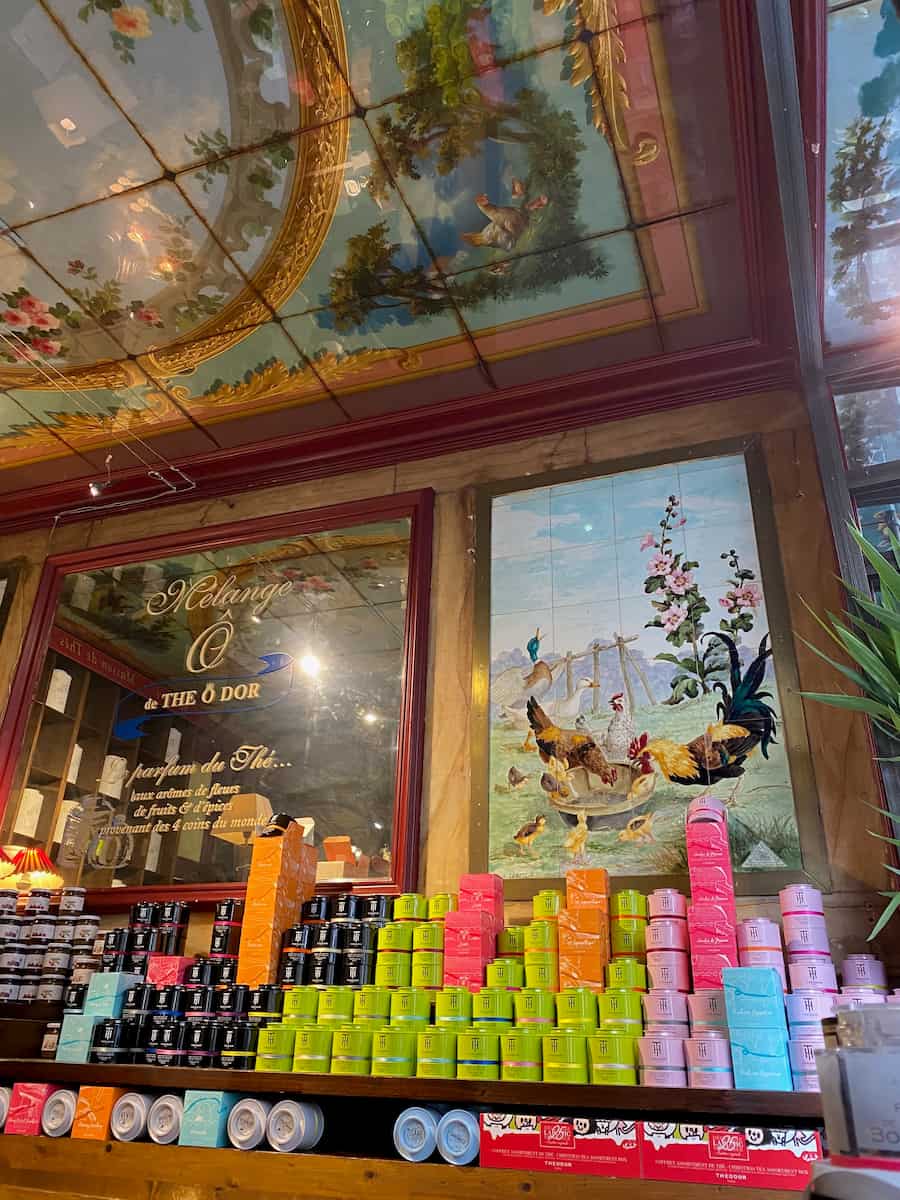 Just a few examples of their vast tea selection:

Pro Tip: Just as with tasting wine, when the tea is finished, swirl the end of the tea around the cup. This way it gathers all of the wonderful aromas around the empty, fragranced teacup. 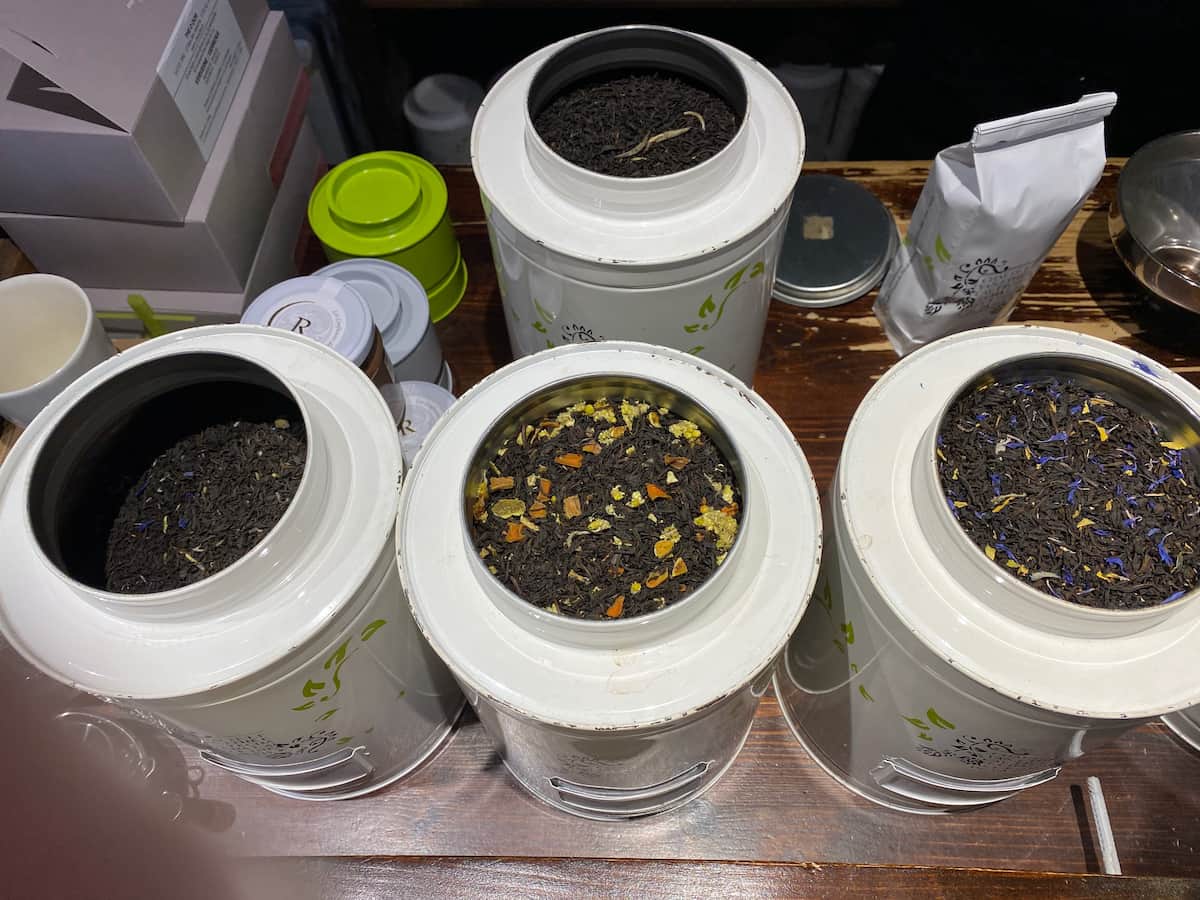 Looking for Earl Grey tea? There are at least 3 types (Royal, Superior …)

Imagine a unique tea brew called “I Love You” – Je t’aime from Paris. What’s more, it conjures up flavours of macarons.

Je t’aime belongs to the “Teas of the Gallantry” essence, represented with a fuchsia pink ribbon. Gallantry expresses “pastry flavours tasting like fruit and candy. They will offer a flattering and indulging pleasure while remaining light and refined.”

This macaron tea has a loving green tea sister, J’aime, flavoured with notes of macaron and strawberry.

I Love You‘s pronounced fragrances are indeed pistachio and macaron. Like an alchemist in the kitchen or in a perfumery, Monsieur Leleu creates the macaron flavour by adding ingredients such as pink peony rose petals (clearly visible), bitter almond, coconut, chocolate, chopped almond pieces, and coconut shavings. 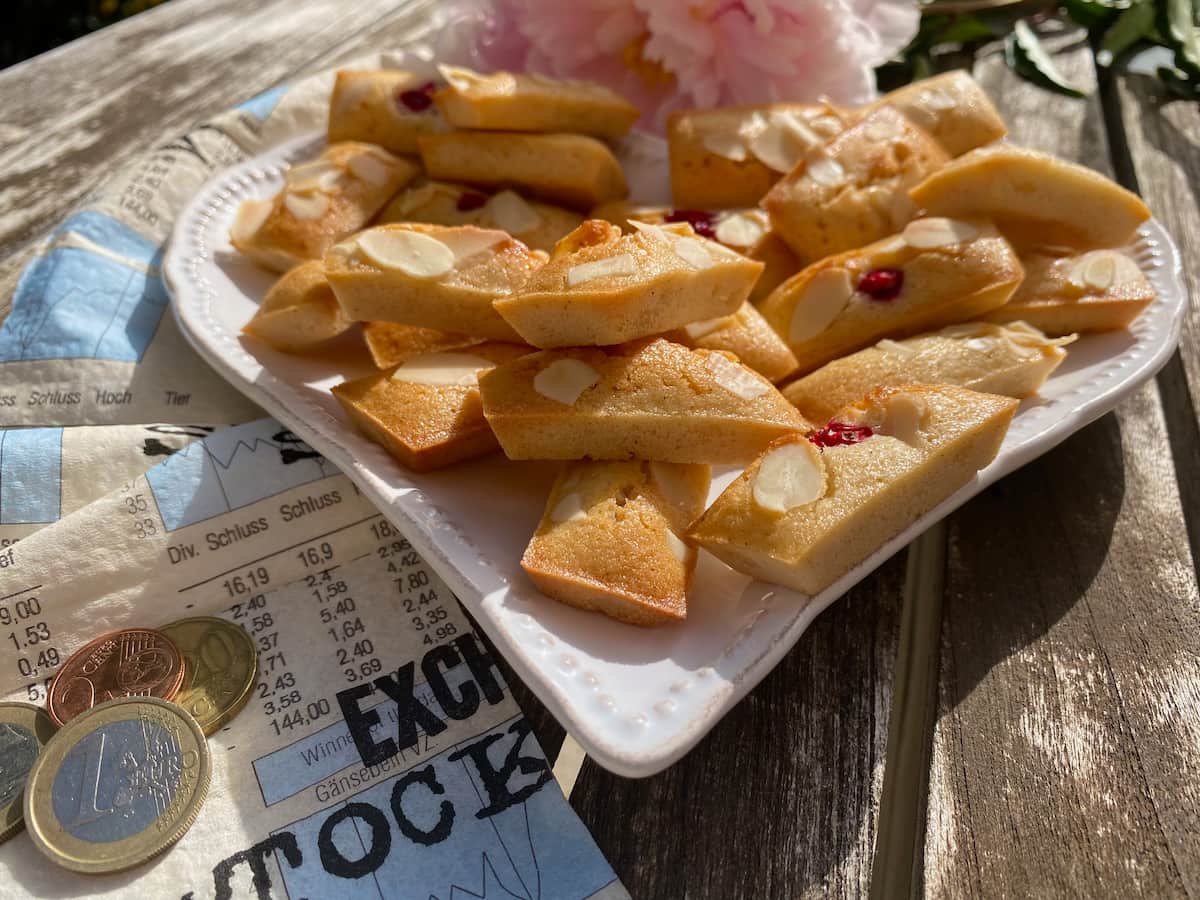 What do the French Eat with Tea?

The French do enjoy tea and it is increasingly popular – particularly in Paris. This is the inspiration behind my book, Teatime in Paris. After each typical French pastry or teacake recipe, I give matching tea recommendations.

Teatime in France is around 4pm – known as le goûter or quatre-heures – and usually a pot of tea is enjoyed with not a ton of cakes but instead, just a simple patisserie, a teacake or 2-3 macarons.

Here are just a few examples to enjoy with a French teatime – particularly with that macaron tea: 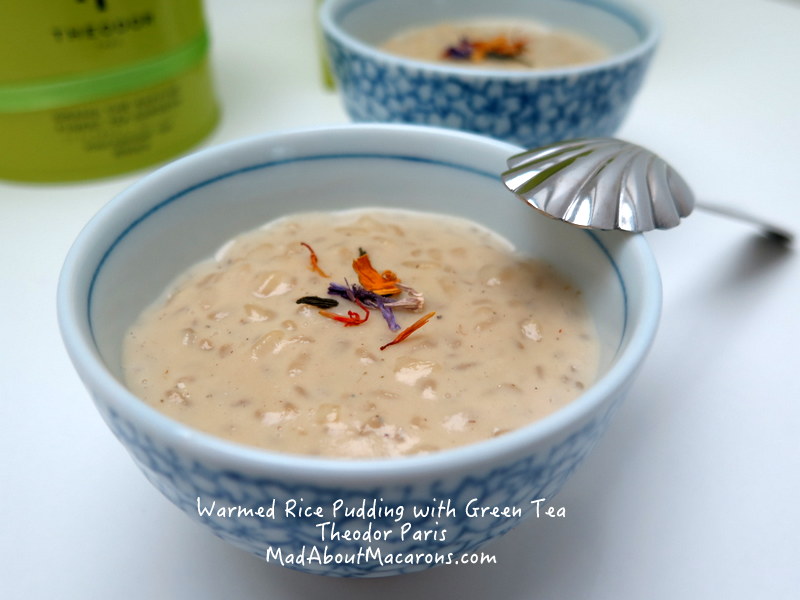 Likewise, thanks to Theodor’s friendly staff (they also speak English for visitors), they encourage cooking and baking with tea. It’s genius.

I already tried this using Chai Tea, which works a treat in this Chai Crème Anglaise. It adds a touch of warm spice and so great with chocolate desserts. Have you tried this? Let me know what you’ve tried in the comments below. 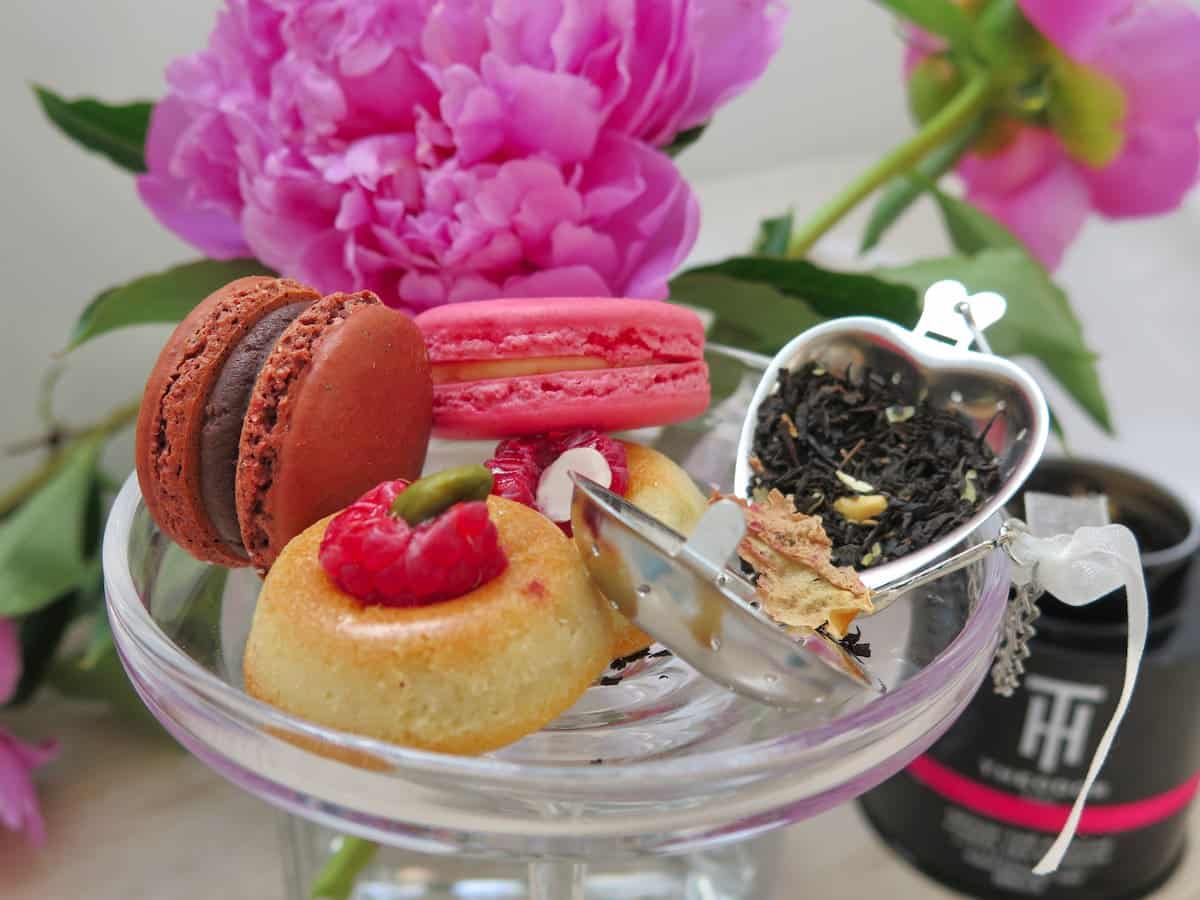 The perfect “tea gourmet”: a cup or two of I Love You, rose and chocolate macarons and some almond financier cakes – the recipes are all in my book, Teatime in Paris: A Walk Through Easy Patisserie Recipes.

“The only way to have a cup of tea, is by loving it.”  Guillaume Leleu (Theodor)

So, next time you’re around Paris’s Trocadero, think of visiting this gem. They also sell beautiful teapots and scented tea candles. Theodor is one of France’s most fabulous tea brands in Paris and I can’t recommend them highly enough. They also have the best tea bags in Paris! 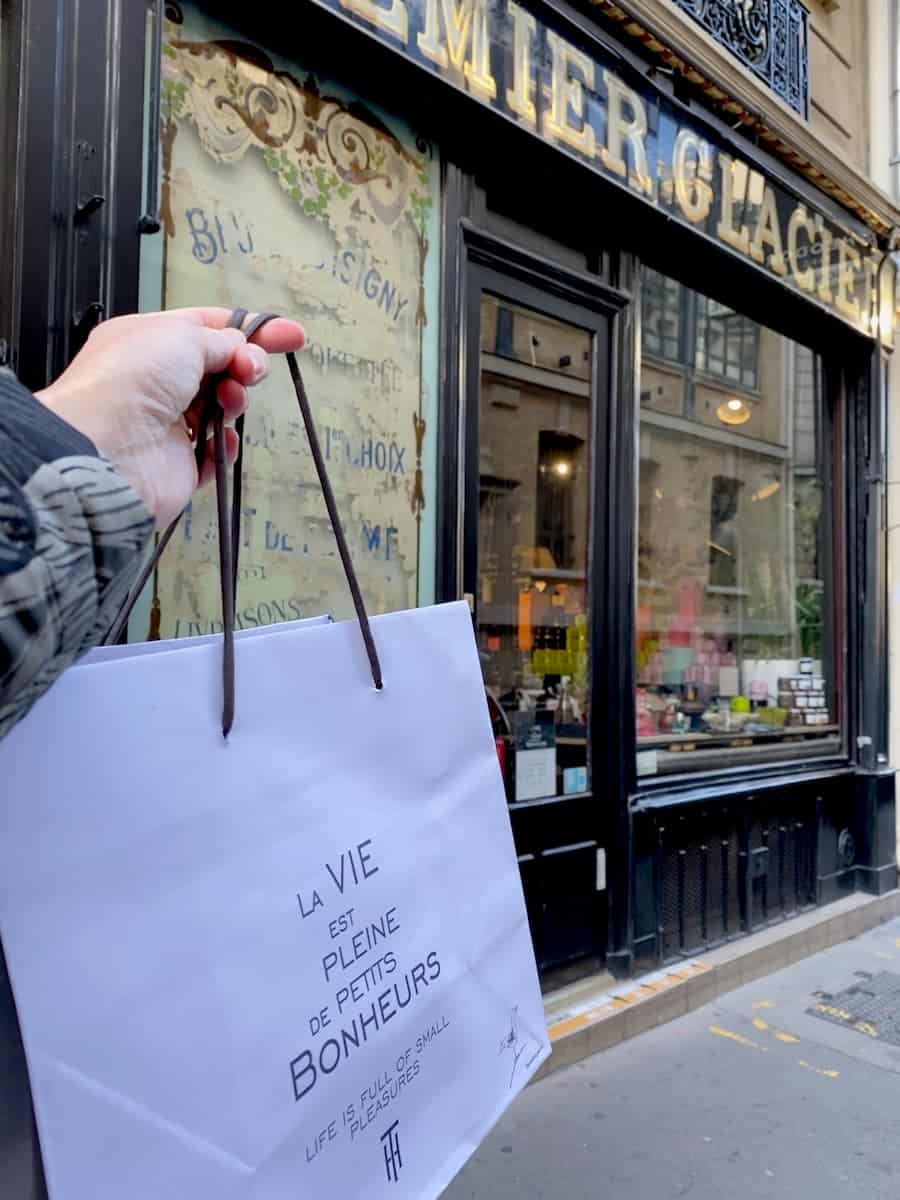 Incidentally, if you’re looking for afternoon tea not far from Trocadéro, then see my article on my Shangri-La teatime tour. It’s another historical building with tea involved.

This post is not sponsored in any way and I was not asked to write about Theodor.
As always, all opinions are entirely my own.
This post was first published 22 June 2015 but has now been completely updated