Macaron Day may be over in Paris but it’s time to relive the experience now that the last macaron is finished today from le loot bag. 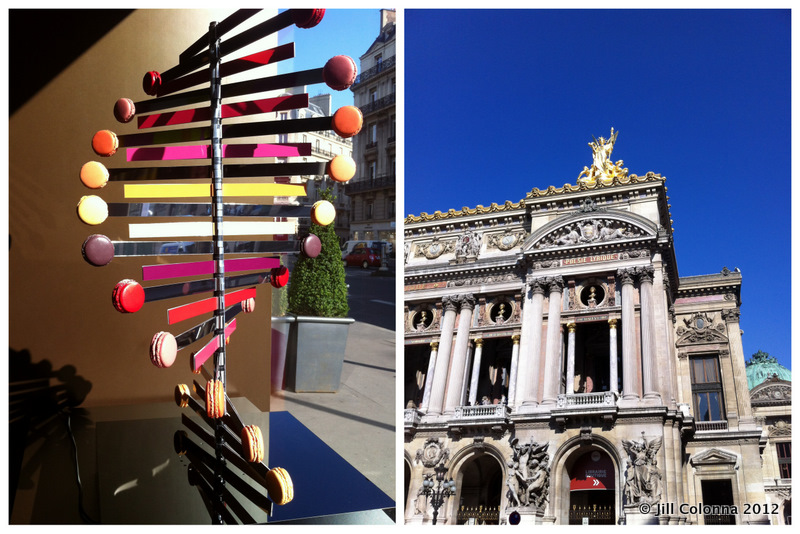 Our sunny Paris macaronathon started out at Pierre Hermé’s boutique at Opéra, with talented artist, Carol Gillott and clever ‘Bear’ of Paris Breakfasts fame. Where was the queue at 10h opening? There wasn’t even time to wait in line and think about what first flavour to choose. Pressure. Many other boutiques were taking part in the Paris Jour du Macaron but as time was limited, we didn’t manage to do all of them. However, we did well.  Really well. 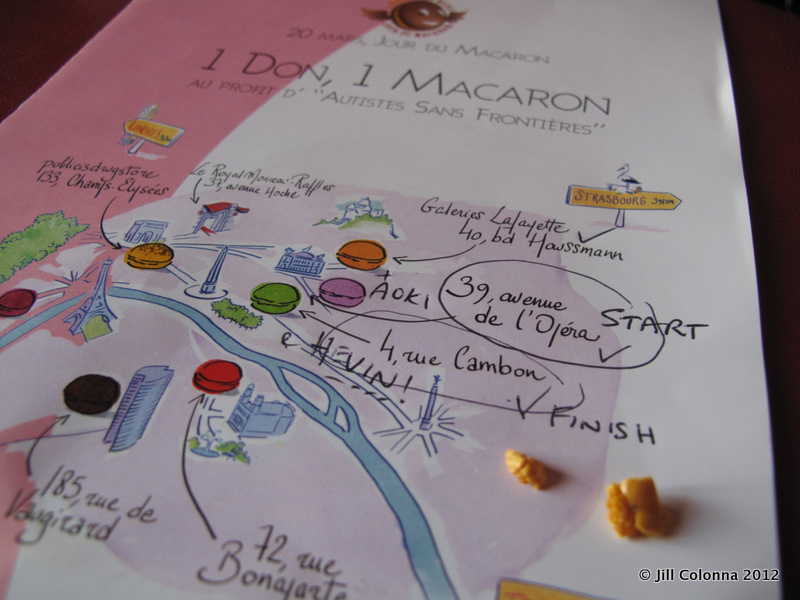 A donation for a macaron

This was the deal with participating macaron boutiques: give a donation to Autistes sans Frontières and pick a macaron of your choice. Hermé had 25 enticing flavours. My first choice was the classic Ispahan (rose, litchi & raspberry) with Hermé’s characteristic spots of metallic food colouring. Don’t ask me how it happened, but we didn’t eat them when we came out. It was for saving until later. Since we were across the road, a quick stop was needed at the Japanese Supermarket, Kioko, as I’m craving yuzu powder for some pastries to make at home. Forget it. A kilo bag for over €120? Back to the macaron hunt. 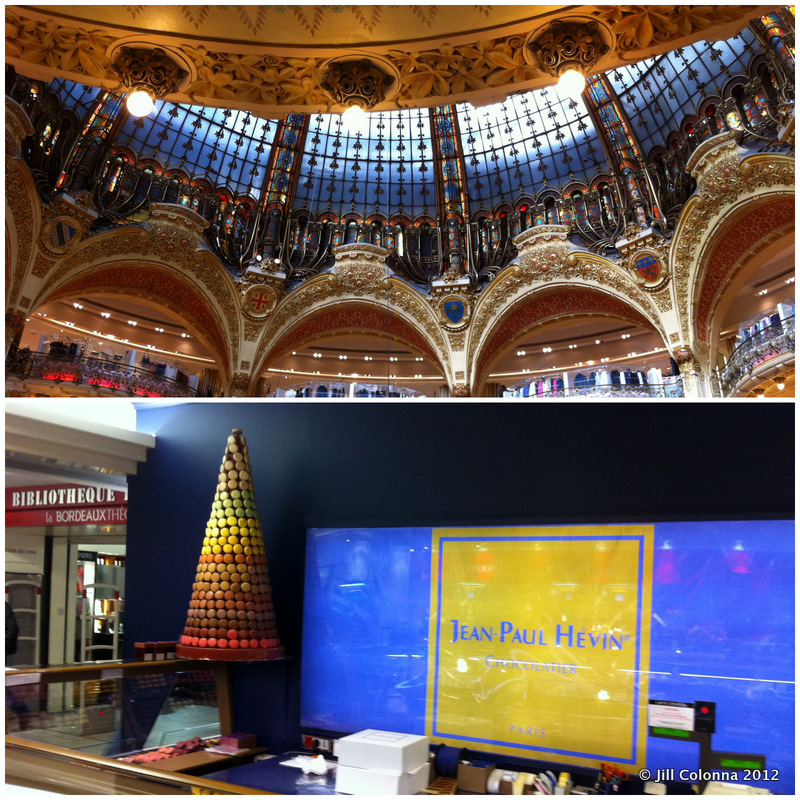 On to Galeries Lafayette. Where were the queues? The sudden rush of excitement came at Jean-Paul Hévin: with one donation you could choose THREE of his chocolate-something macarons. The sugar rush was on. Quick, next on the list was Dalloyau just in macaron crumb distance. The server took one pitiful look at us as she explained they were certainly not participating in the event. Why do I never get it? After 20 years experience of living here, I should have just shown her The List in black & white. But when in Paris, you must remember that the client is the lowest form of being. 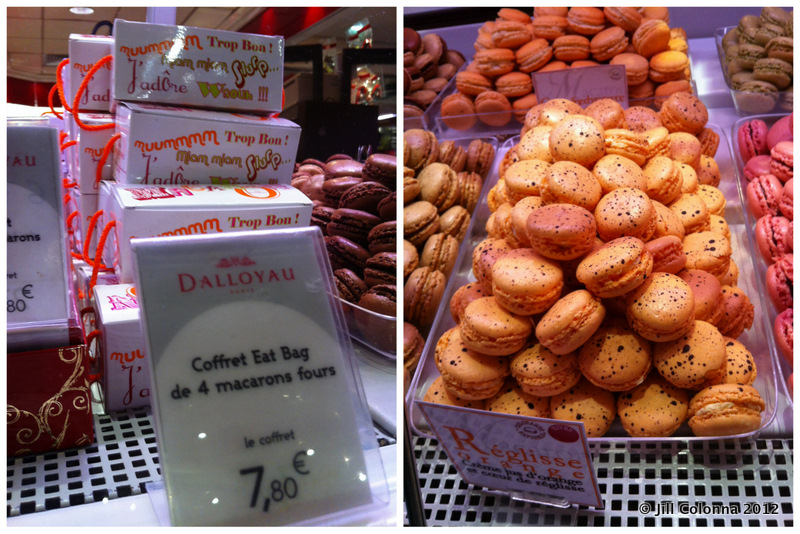 Already with 4 macarons, how could we transport our macarons without the inevitable crushing in a handbag? Time to look for boxes. Could we buy a pâtisserie box or bag, s’il vous plaît, Madame? But of course not. What do you think this is? A charity or something?  You have to buy boxes with macarons in them. But why would we do that on the Fête du Macaron?  You just don’t get it. 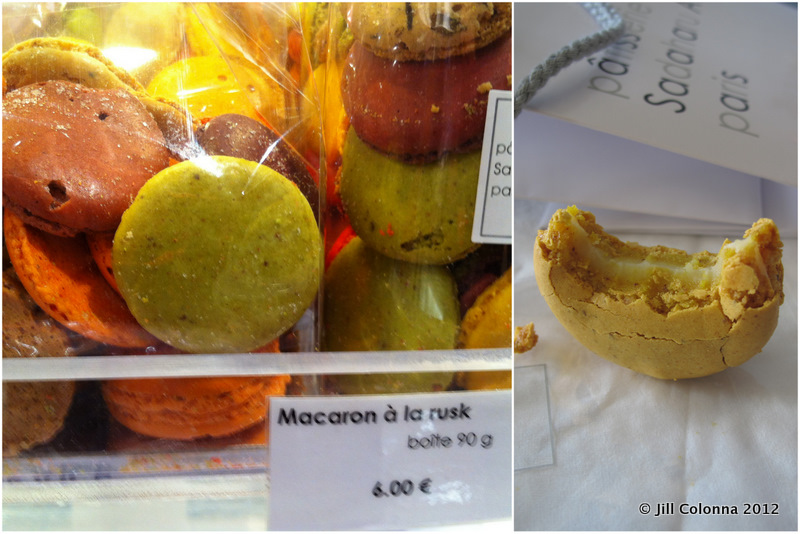 The delightful ladies at Sadaharu Aoki understood. Mon Dieu. They were selling macaron shells: macaron à la rusk. What a great idea! As the prized yuzu macaron was delicately placed in its perfect pochette, our loot was looking good stacked in a shiny bag. We still had room in there for more. The macaronivores in us crescendoed as we sped downstairs to Pierre Hermé like kids in a giant sweet shop. Then upstairs to Pierre Hermé. Hm. They know we’re fans, as they stick little stickers on your coat.  I wonder if that’s secret code for Triple Greedy PH Macaronivores? 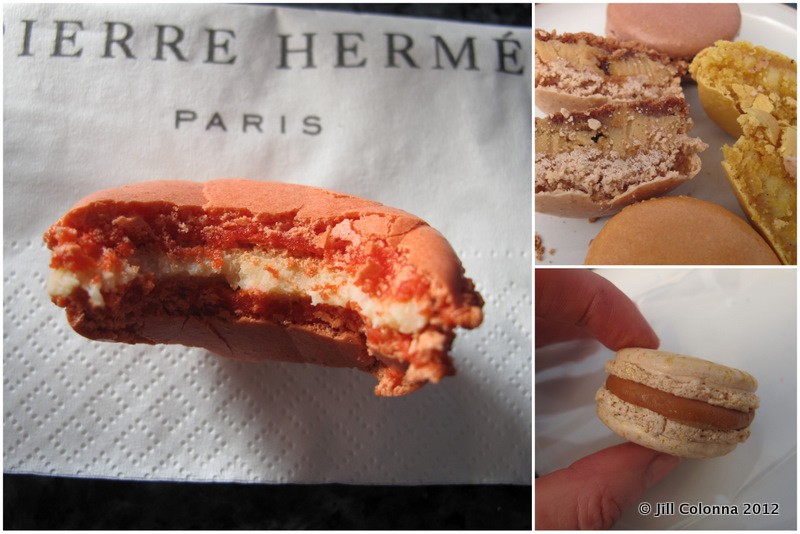 Another quick stop. But at €1.50 to spend a penny we decided to give the throne room at Galeries Lafayette a miss. We didn’t really need a posh seat, you know – even if we were holding an Aoki Paris pâtisserie bag. 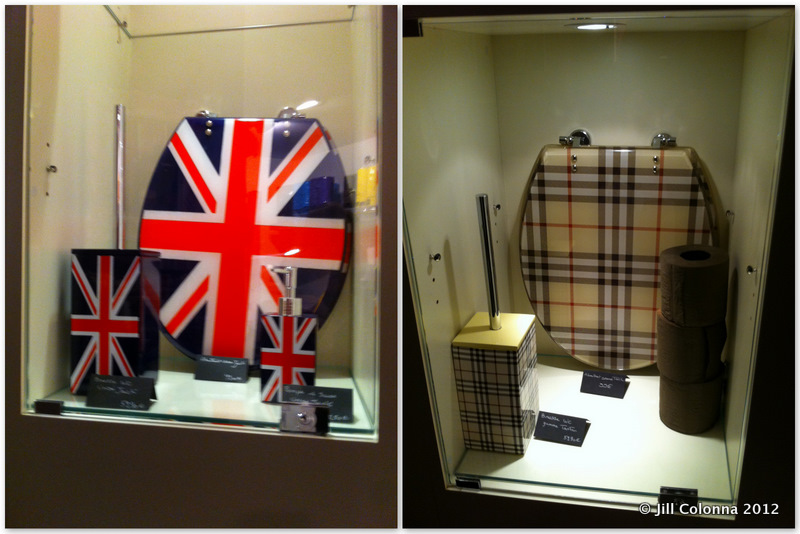 It was time to get out of the store and the 9th Arrondissement. Carol had a great idea: back to Hévin for 3 more in the 7th – metro stop  Ecole Militaire. I have a soft spot for this area, since Antoine and I had a doll’s house apartment here for 5 years. Was it the stickers on my coat? The loot bag? Not enough thudding sound in the donation box? I somehow got flashed le look from Madame as I left with yet another three macs… 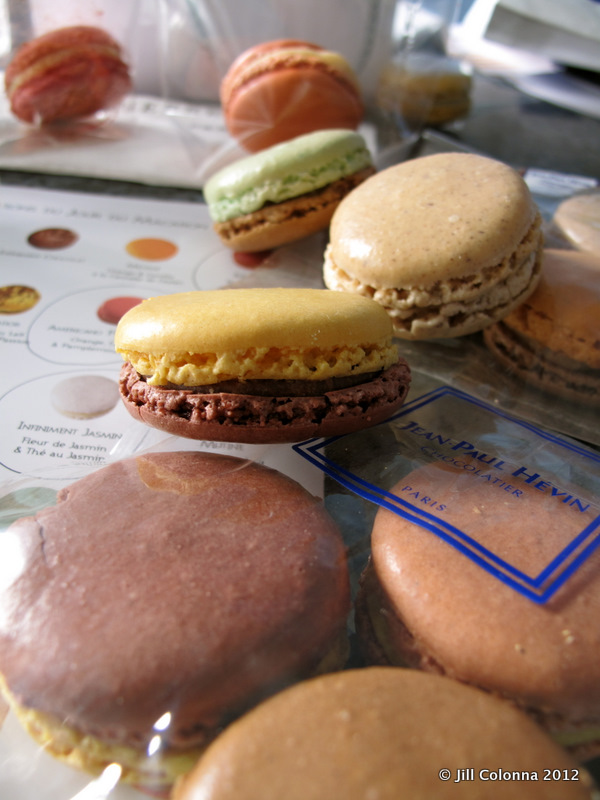 My favourite from Hévin was this Chocolate-Yuzu

…then another three from the Hévin boutique in rue Saint Honoré in the 1st Arrondissement. Final stop was Hermé again in rue Cambon. This time the most exquisite dark chocolates were offered as a tasting at the door, as the charming ladies smiled at our greedy PH stickers. So thoughtful for people like us who weren’t actually tasting our macarons sur place. Until later. 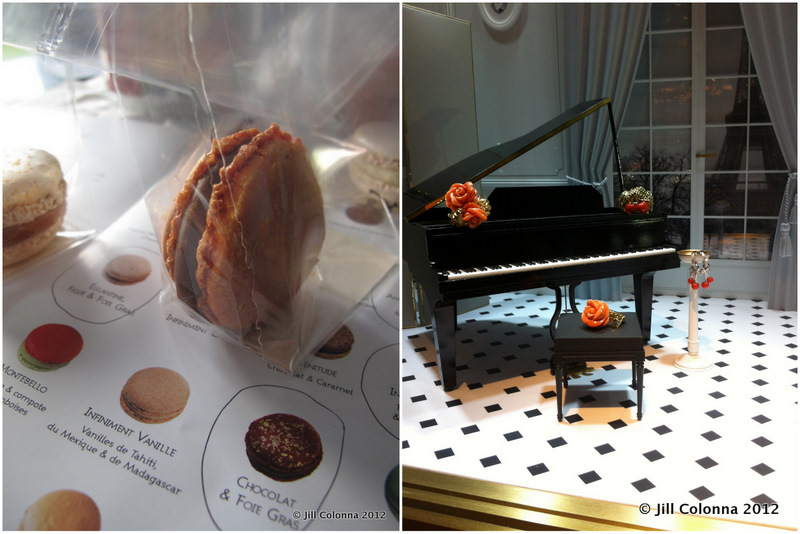 It was time to return home since the piano students would be waiting. It’s just as well they practised this week otherwise they’d have to donate a macaron for every wrong note. If you’re reading this, take note for future lessons. 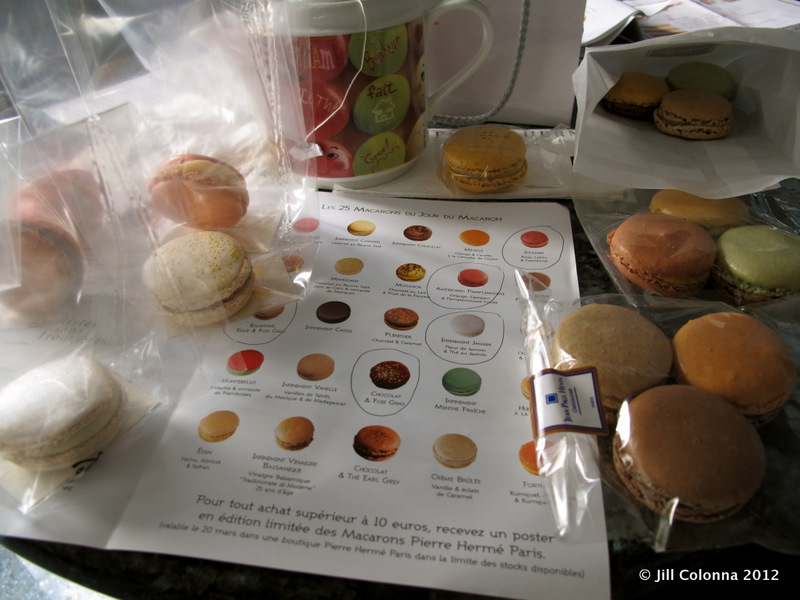 Not bad, she said. Smugly. Tea and tasting time!

Hévin’s macarons are delicious but they generally lack the depth of flavour that you get from Hermé, although they are lighter and ‘easier to eat’. My personal favourite was his Chocolate-Yuzu. Fabulous. The plain Yuzu macaron of Aoki certainly hit the spot with a perfect bite. Hermé’s Ispahan is incredible, but it does have the impression of eating into butter: it’s so rich and sweet.

The fois gras, fig and rosehip was incredibly original: the foie gras notes were pronounced and the macaron was distinctly sweet. It’s meant as a dessert, so the foie gras was kind of strange. You couldn’t really serve it as an apéritif. Today I opened the chocolate-foie gras and the whole thing had turned to mush after 2 days. Boohoo.

Today I tasted Hermé’s new additions and loved them: Americano Pamplemousse for its bitter-sweet (reminded me of hibiscus-Campari-blood orange) and slightly more crunch to the shell, plus my favourite: his new Infiniment Jasmin, as part of his 2012 collection, “Les Jardins”. The jasmine was slightly lighter than the others and packed full of flavour of the flower and jasmine tea – plus with Pierre Hermé’s distinct metallic food colouring hue. 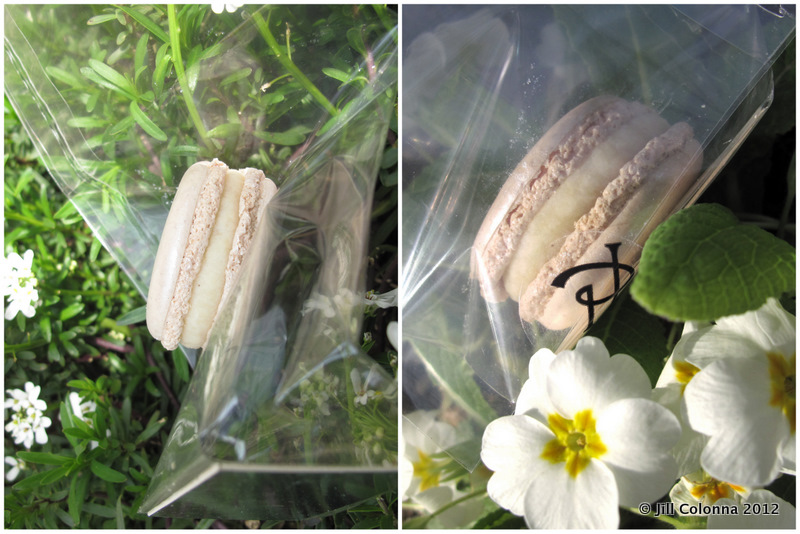 Have a wonderful week and don’t worry: macaron day may be over but Spring is here and macaron day continues in my book. Won’t you join me?

[…] Don’t you just love trying out new concoctions? Thanks to MacTweets for the inspiration and Happy Macaron Day to all you macaronivores on 20th March. If anyone is in Paris, contact me and we’ll go on a […]

March 17, 2014
Macarons with Kumquat and Rosemary Cream… | My Website

[…] day, but as I mentioned before cracked shells and feet less mac’s were haunting me. My friend Jill Colonna, the legendary author of Mad About Macarons once left me a comment telling me not to sweat it when […]