Many people think I live in Paris. I used to live there for 7 years before the children were born. It was wonderful. Another chapter. But truth be told it’s just as wonderful living outside the City of Light. It’s close enough to Paris but far enough to feel out in the country.

Over the next few weeks, I’ll give you a taste of our environs. Today let’s kick off with a walk along the River Seine in nearby Chatou. It’s only 10 minutes west from Paris in the RER commuter train (from Charles de Gaulle’s stop at the Arc de Triomphe in Paris.)

Along the banks of the River Seine, Chatou

Chatou is one of the towns by the River Seine where the Impressionist painters settled down their easles and impressive palettes. Auguste Renoir took Claude Monet to discover this area and they painted together a set of pieces around the “Grenouillère” just near this spot, where Parisians would flock on the weekend to bathe in the countryside (more on that later, since this deserves a separate post.) The neighbouring towns have about 30 reproductions like this below, to mark the Impressionists’ route. 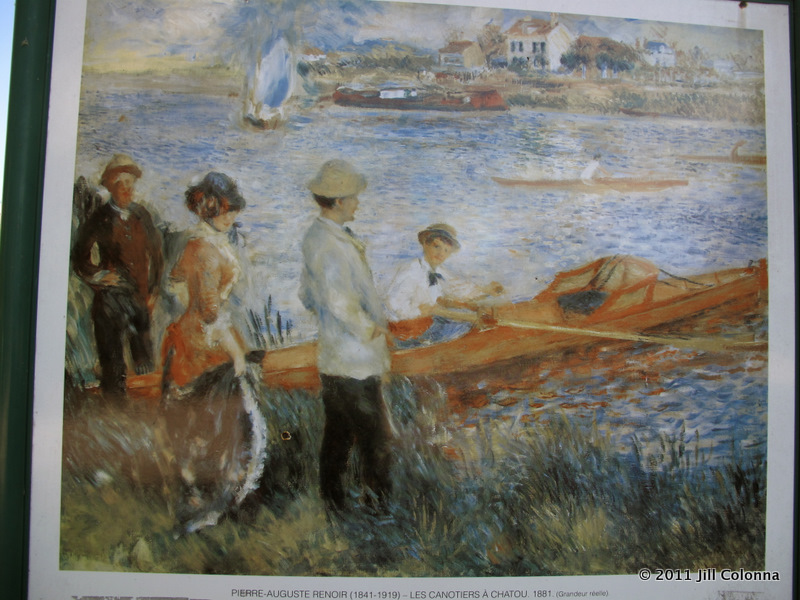 This is one of my favourite spots in Chatou: the Île des Impressionnistes. The hamlet on the Impressionists’ island was a popular hang out of artists and poets. Thankfully it was restored recently to include the original Fournaise restaurant, a museum, and a boating workshop.  One of the most famous regulars was Auguste Renoir, who was often here at the Fournaise Restaurant. 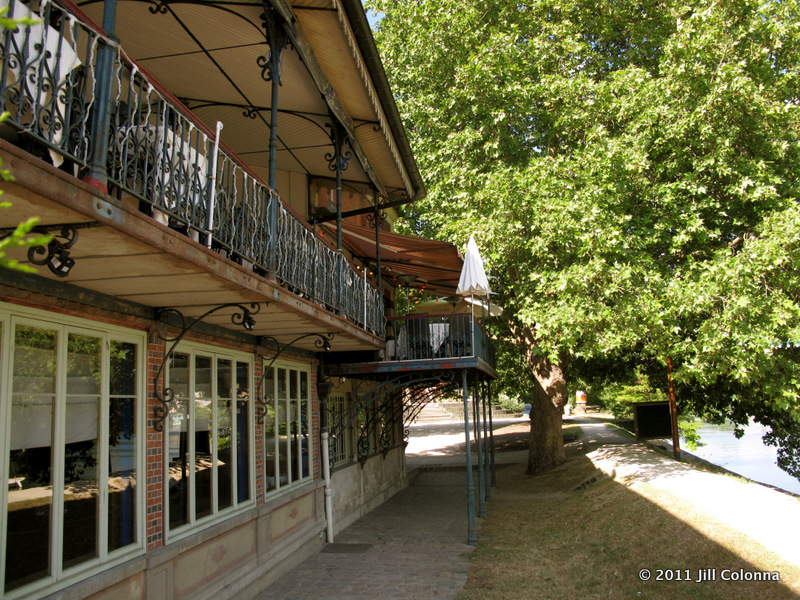 Do you recognise this painting?  It’s amazing to think that the scene of Auguste Renoir’s masterpiece,”Le Déjeuner des Canotiers” is just here on that balcony.  Amongst his friends in the painting, the lady clutching the dog on the left ended up becoming Madame Renoir a few years later. 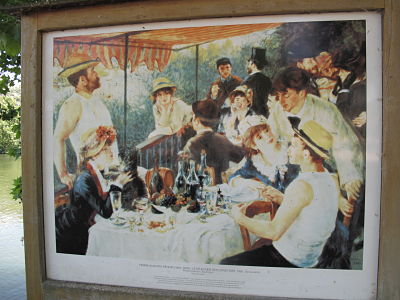 Today nothing much has changed.  The light changes dramatically, reflecting the different seasons. The restaurant is still lively and next door, you can now visit the Fournaise museum. 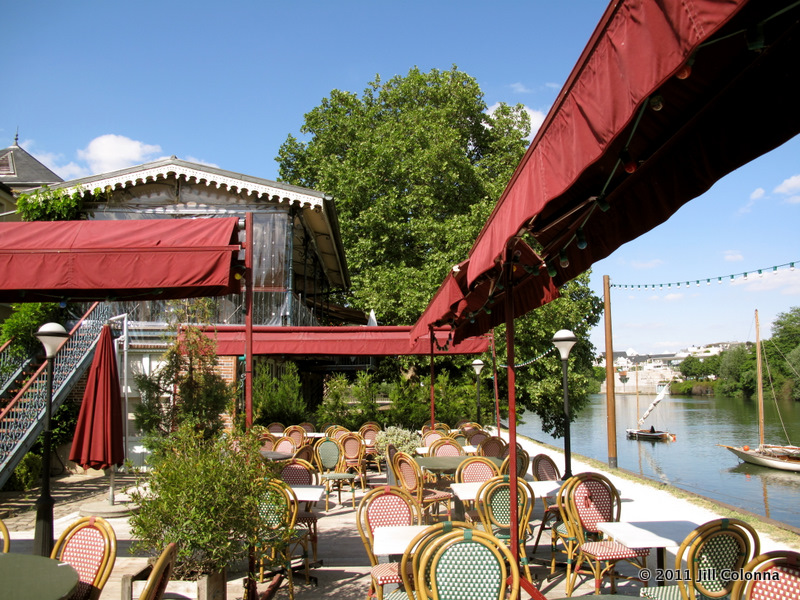 The day I took these shots, the place was deserted. It was almost spooky.  It’s as if you could hear faint laughter of a bunch of artist friends sitting around a table of fruit and wine up on that balcony. 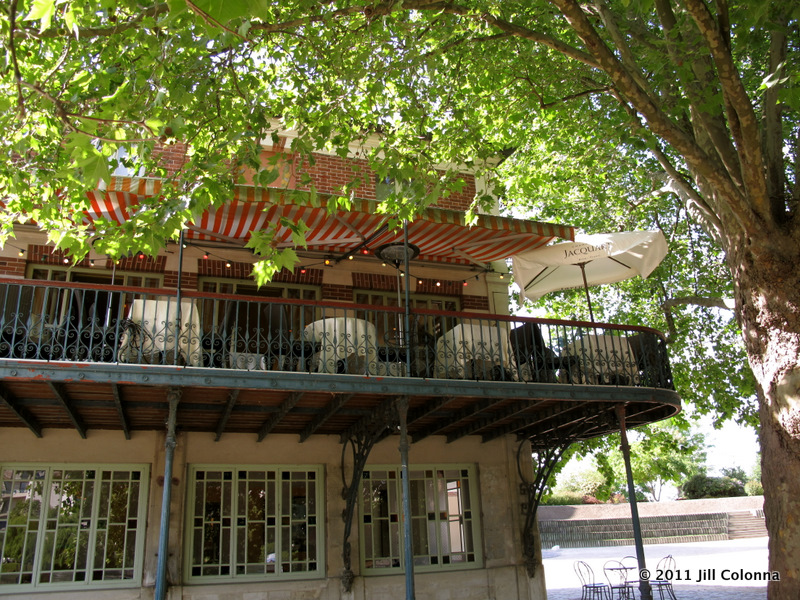 Renoir was watching from that balcony

I’m not an artist, although some family members may disagree when it comes to “wine tasting”. The nearest I get to playing with paints is flicking food colouring on macarons. It’s great fun. It’s best to do this once the macarons have aired and are ready to go in the oven. 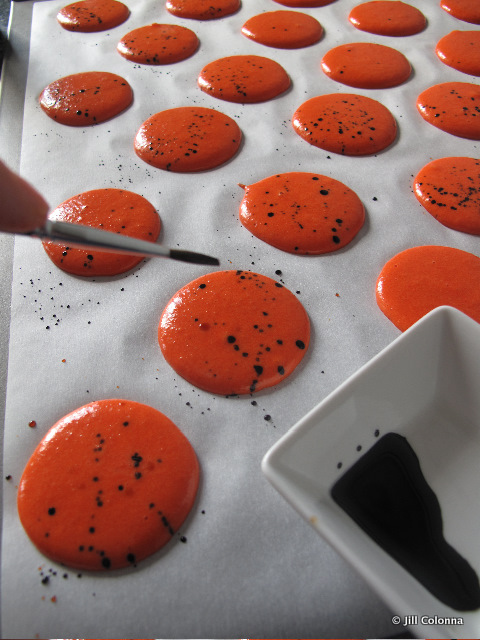 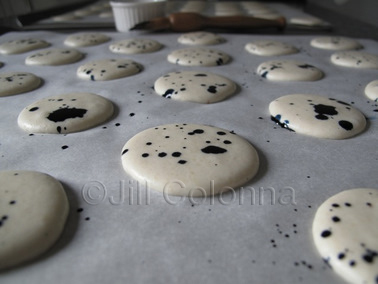 Dotty macaron recipe for orange, prune and armagnac macarons in my book, Mad About Macarons. 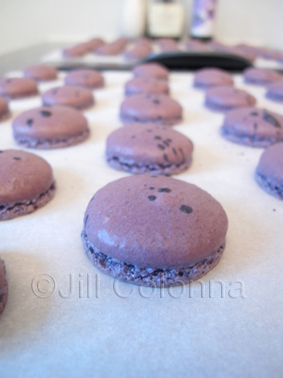 Have you been going dotty with macarons lately?

See my post about the Seine river walk between Chatou and Carrières-sur-Seine.

[…] This image of Jean-Paul Hévin to present the new French Touch chocolate collection sums up his quirky humour. I wonder what Renoir would have preferred for a festive dessert at this rather famous lively lunch on the Seine or Déjeuner des Canotiers in Chatou? […]

Jill, these are so beautiful! I love the creativity. I definitely want to try this next time I make macs 🙂 Thanks for sharing!