How best to spend three days in Rio de Janeiro Brazil. Guide to attractions and restaurants before the 2016 Olympic Games.

It’s just how I imagined it. Rio’s Copacabana Beach showed off this scene on our first night, directly in front of the hotel with the blue moon looking on. Although it’s winter, the weather is perfect at this time of year, with temperatures hovering around 25°C. As one new Brazilian friend teased, “Winter in Rio was last Wednesday”. Although we weren’t there at the time of the famous Carnival, we quickly realised how much more there is to Rio than Copacabana. For a start, there’s also Ipanema Beach.

Arriving off our night flight and feeling a bit new in this exciting City we were thankful to have booked an ideal 2-hour “Welcome to Rio” walk with Context Travel. Our lovely and lively guide, Amber, came to meet us and was itching to explain Rio’s different neighbourhoods and help us prepare our visit. Knowing we also love good food, she pointed us around the corner from the Copacabana Palace to show us some typical snacks. It didn’t take us long to taste our way around the bacon popcorn and carts of freshly baked brigadeiros, sweet chocolate fudge truffles made with condensed milk. 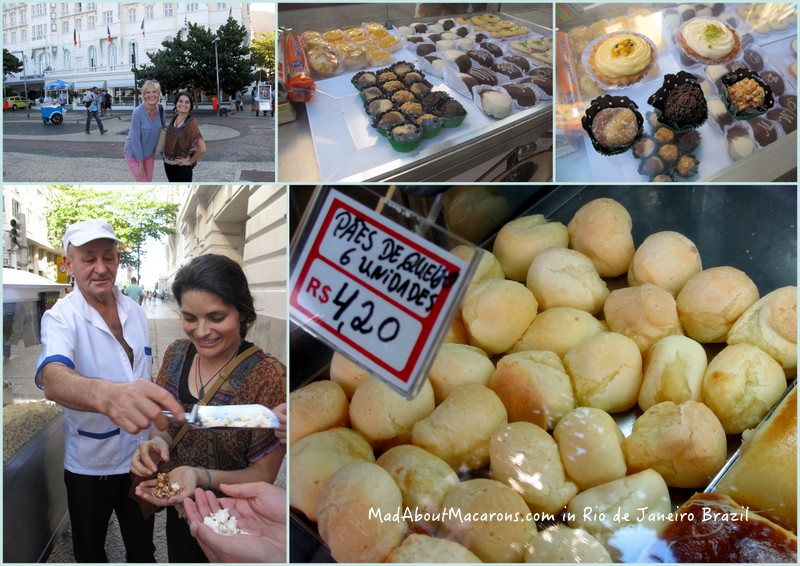 Pao de Queijo – warmed cheese bread balls, were my favourite and became rather addictive during our trip. They’re not unlike Gougères – French style cheese puffs typical of Burgundy, made with choux pastry – but the Brazilian version is more dense and heavier in weight. This is because instead of making them using normal all-purpose flour (as in Gougères), these cheese balls use cassava flour or tapioca flour. We also tried cheese waffles, based on these Pao de Queijo. 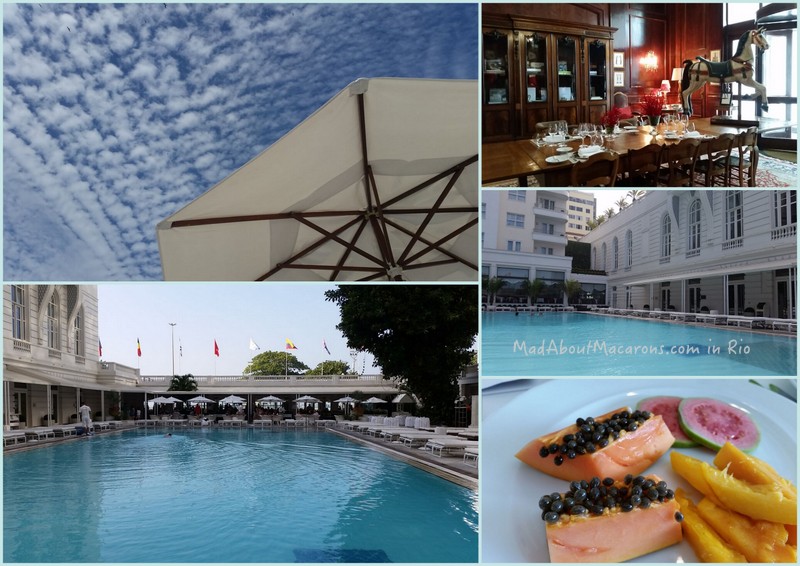 Surprisingly, we saw Pao de Queijo on each hotels’ breakfast buffets during the trip along with the most succulent local mango, guava and papaya served with lime wedges. Limes are more popular than lemons and so a must try is the national Brazilian cocktail, the Caipirinha at one of the many kiosks along the beach (more on that in the next post) or by the pool as a special treat at the famous Copacabana Palace, which opened its Art Deco doors in 1923.

Another Context Tour really helped us get an idea of the City Centre (Centro), Founding Rio, the Marvellous City. Beth walked us through Rio’s fascinating history, starting with the Portuguese sailing into Guanabara Bay in January 1502. Thinking it was a mouth of a river, they called it Rio de Janeiro, or January River. By 1822 Emperor Pedro I declared Brazil’s independence with Portugal and the evidence of old Colonial with new is evident throughout the City, who’s ports served as the Capital for the gold, coffee and diamond trade. It wasn’t until 1960 that the Capital was moved to Brasilia, a more central location. The tour ended here at the Cathedral of Saint Sebastian. Finished in 1979, it looks rather like a Mayan pyramid amongst the mix of Colonial and more modern structures. A note on security: it wasn’t as bad as we’d heard. Like any big city, you do need to be streetwise: don’t wear a watch or jewellery or walk around with cameras on show, and stay clear of any dodgy areas at night (or darkly lit areas). Take cabs at night! In preparation for the 2016 Olympics, the police have tightened security and gone through a major project to pacify the favelas (shanty towns) and with police presence around the city, we felt safe. Just be practical and in areas in the North East, know where you’re going otherwise take a taxi.

Antoine had to talk sweetly to get me up Sugar Loaf Mountain. With vertigo, you can imagine why I’d be scared just looking at this picture. I still can’t believe I did it! There are two cable cars. The first takes you to the flatter, Urca Mountain, and from there you are whisked up by second cable car (some mountaineers decided to brave it up the only other way) up 400m. My secret was to stay in the middle and not look out of the window. There is a lot more room up there than you think to walk around, believe me! Don’t forget your kids’ IDs in order to qualify for price concessions.  We didn’t cart around our passports (naturally in a big city!) and found ourselves paying full over-21 adult prices for our 12 and 15 year olds. Lucie turned 13 a couple of days later; I know she’s tall but 21? Really. The promised sweet talk started with one of the best ice creams in Rio at Felice in Ipanema.  I opted for the passion fruit and chilli dark chocolate.  The pistachio was also delicious – and just the right colour (you know how fussy I am about pistachio colour!).

However, for the best Teatime in Rio head to the famous institution reminiscent of the Belle Epoque, the Confeitaria Colombo in the heart of the City. It was busy. Apologies for the terrible shot above here but I get excited in places like this, surrounded by Art Nouveau decor and wondering who exactly walked these floors since 1894. Queen Elizabeth II did, apparently. Needless to say, my choice was for the Pastels de Nata. I even had a savoury one, with cod fish followed by a most exquisite Pastel de Caipirinha (could you guess?). They also had French-inspired éclairs, Napoleon millefeuilles, lemon meringue tarts and chocolate tartlets (recipes in Teatime in Paris!). Talking of food, we tried out a number of places for dinner in our 5 days in Rio but here are our best restaurants for a 3 day stay: Another essential must-see in Rio is up the Corcovado (Portuguese for “hunchback”) mountain to see the monument of Christ the Redeemer (Cristo Rendentor). The most popular transport to get there is by train.  Normally we would have done it early in the morning to avoid the crowds but since this was Winter and the sun was shining with a great view potential, we took a taxi up to Paineiras Road then bought our tickets for the park vans to take us to the top.

Again, like Sugar Loaf Mountain, there is a lot more room at the top than you think for the weaker amongst us. And the view of Rio de Janeiro is incredible – don’t forget a jacket or cardigan, as it is a bit cooler up there.  If it’s misty, however, don’t even bother going.  The whole point is for the view and to see the statue perched on this granite rock of 710m.  On a misty day you won’t see either of them.  We also saw some monkeys on the way down in the Tijuca Forest, which just made Lucie’s 13th birthday! On our last day we enjoyed our final walking tour with Amber from Context: Bohemian Rio, Santa Teresa and Lapa. Even although we had already seen a bit of Santa Teresa, we would never have seen all the secret parts of it without a guide. Amber showed us the original trolley car, famous in Santa Teresa but which was stopped in 2012 for security reasons following an accident. The area is full of renovation work in anticipation of the Olympics next year but it looks like the trolley will be back in action again soon. We loved visiting this traditional bookstore with a difference, where this passionate writer keeps the tradition alive of writing booklets on academic subjects – some of which were in English. There are many flamboyant artists in the area too, finding ingenious ways to recycle abandoned objects, including a Beetle car shell!

As we walked on the typical mosaic tiled pavements in Rio – originally brought from Portugal and replaced by gold on the way back – our tour with Amber finished with a hidden viewpoint in the heart of the city to watch the most magnificent sunset. For music lovers, the home of Bossa Nova calls and the end of our trip finished on a high note at the Vinicius Bar in Ipanema with Gloria Ettari. I couldn’t recommend this enough! Stay tuned for the next post where we stop off at two destinations north and south of Rio, Buzios and Paraty, for a taste of the lazy beach life and islands plus the local Cachaça.

(Note: this was not at all a sponsored trip but our private family holiday I wanted to share with you, in preparation for the Olympic Games in Brazil, August 2016)