It's Springtime in Paris with Sunny Lemon Macarons!

It has been a long haul this chilly winter. In fact, I think it has rained since October, making it the longest hiver – more than I’ve ever known after living in Paris for 20 years, 3 months and 3 weeks. It’s my birthday today so I’m particularly 40-something sensitive in counting the years. It’s not the age, it’s the mileage, eh?
Although in France, we should be saying kilometres, rather than miles… 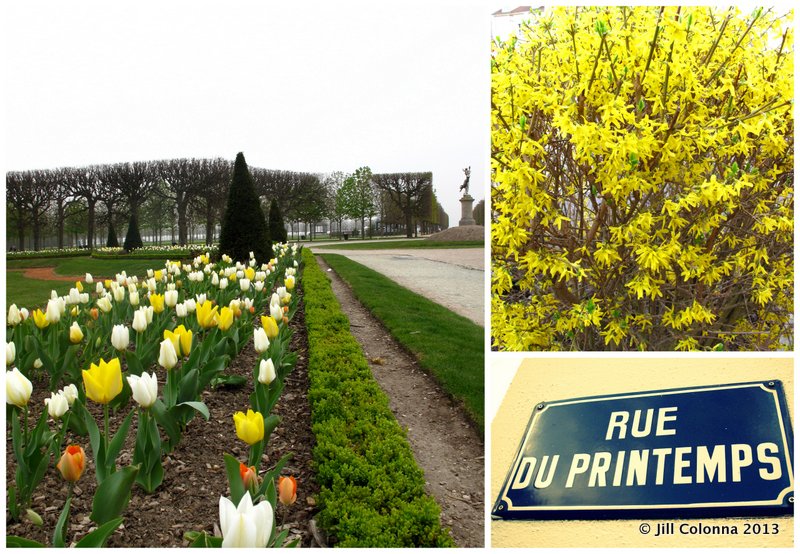 Ouf! Spring has sprung in Paris, enfin. What a pleasure it is to watch the first wasp of the year, buzzing amongst the tulips in the park and hearing the birds’ chattering singsongs in the morning and evening. And the sun… oh, the glorious sun; *bows*. Did we ever tell you just how much we missed you? With the sudden arrival of Printemps yellows and a family goûter this weekend, there was no question as to what macaron flavour needed whipping-up. 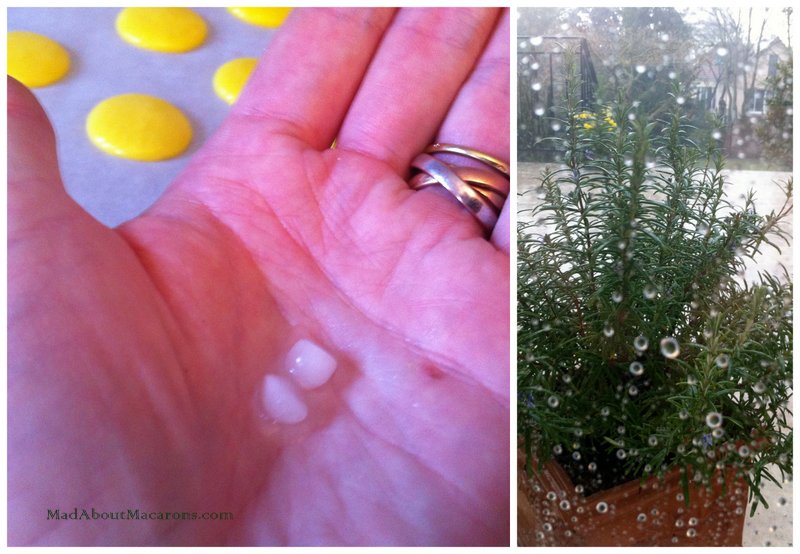 No sooner had the sun popped out, it took fright and hid behind a mass of stormy clouds – just as I was piping out the macaron batter into little rounds. Quoi? A hail storm? These hailstones look small but they’ve already melted in my palms! 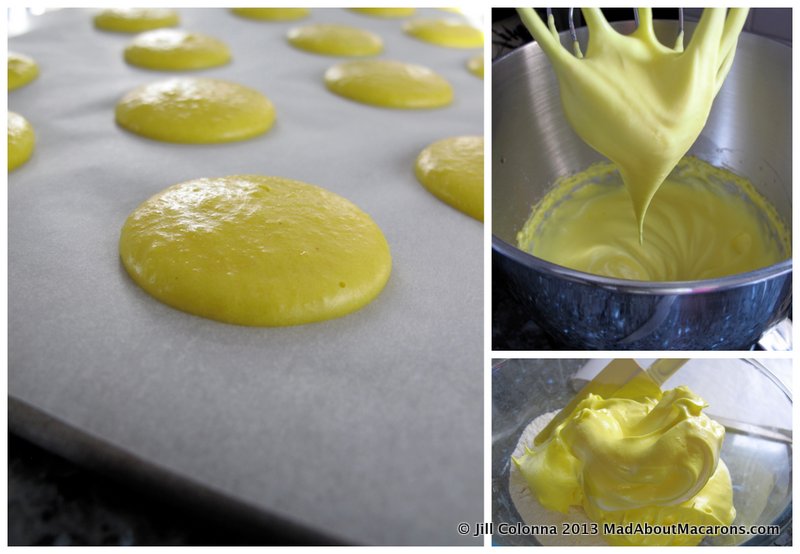 Time to whip up some bright yellow lemon macarons

It had to be sunny yellow. If you’ve followed this blog back when the book first came out at the BBC Good Food Show, I made mimosa macarons for something different. This time, it was simply good old plain – tart-yet-sweet – lemon. Nothing fancy; just tasty and agonisingly addictive. 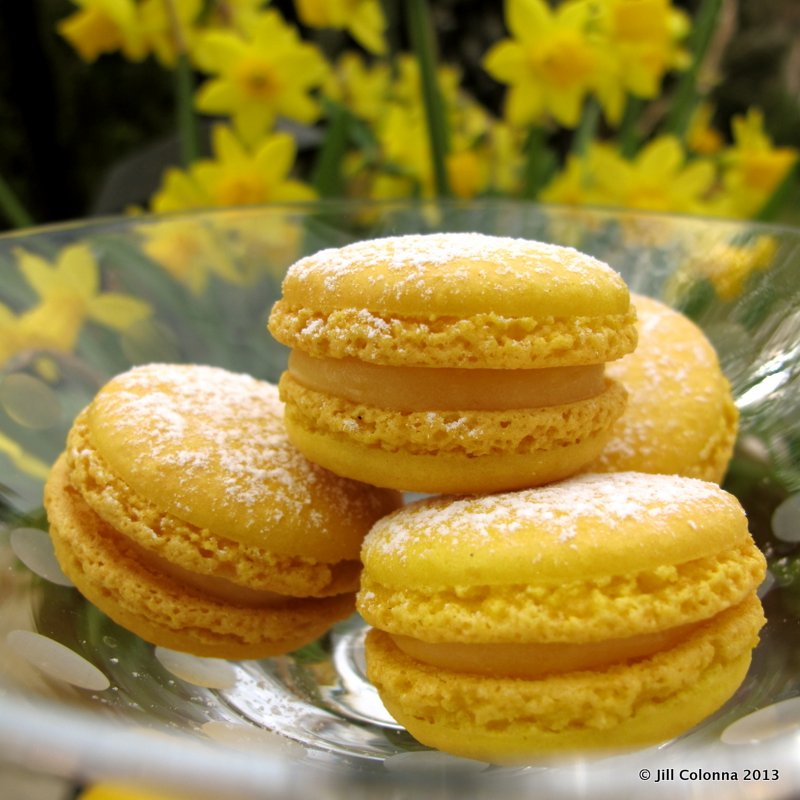 A sweet golden ray of sunshine?

You know that euphoric feeling when you inhale the first sweet air of Spring? It was a magical sky on Sunday, not a cloud in sight – exactly as the weather is today. It’s that end-of-the-tunnel, feeling of relief with a natural energy boost that no supplements or extra fruit can really bring, is it? Now that is a lovely wee wink from la lune, n’est-ce pas? 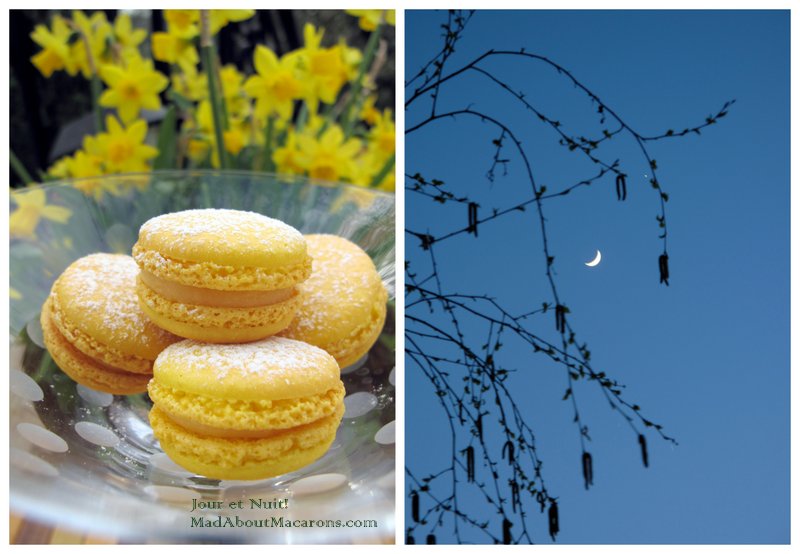 Sun and the moon in Paris – ‘Macaron-style’!

Speaking earlier of miles vs kilometres, I’m seriously thinking of posting something about grams vs ounces. Does it really upset you when I – and other Europeans – post recipes in grams? Let’s be Frank, even if I’m still sticking to the name, Jill. More seriously, how many of you own digital scales? Tell me what you think.

P.S. The recipe for lemon meringue macarons is on page 41 of Mad About Macarons!

Happy birthday, Jill! I’m glad spring has finally reached Paris. I own a digital scale that weighs in grams AND ounces (I love it 🙂

Thanks so much, Ann.

Hope you are enjoying your birthday Jill. Looking at the rain outside I wish I could share your enthusiasm for spring. I’ve had to buy tulips and daffodils because I’m fed up waiting for the bulbs to flower. I do own digital scales and have made macarons 3 times with great success. Thank you for the inspiration to make lemon macs. Hopefully they will give me the end-of-the-tunnel feeling too.

Wishing you plenty of sunshine and daffodils, Thomasina! At least your macarons can keep you smiling in the rain 😉

mmm these look so good! I have been trying (and I mean trying really hard!!) to make macarons. I’ve purchased your book and read it from cover to cover, drooling. The first batch I ever made about a year ago were the best. My last three batches have had no feet when they came out of the oven. They tasted just ok, certainly not great. Any hints on what could be wrong? I realise, reading your notes it could be one of several things.
Sent from half Scottish, half French woman living in Christchurch NZ. That could also be half mad!!! 😀

As you say, Claudine, could be several things and so try concentrating on one aspect the next time – but sounds like your batter is runny and it could be your oven. I would say (not knowing more) that you need to beat your egg whites much more for a start. Read the comments on the Readers’ Forum. If you made them right the 1st time, there’s no reason the next. Sometimes, if all else fails, I’ve found that changing your egg whites helps, too. Just whip them well!