Home • Blog • Thank you for the Macarons

Thank you for the Macarons

That could be the title of a song we all know.  Can you just hear it? 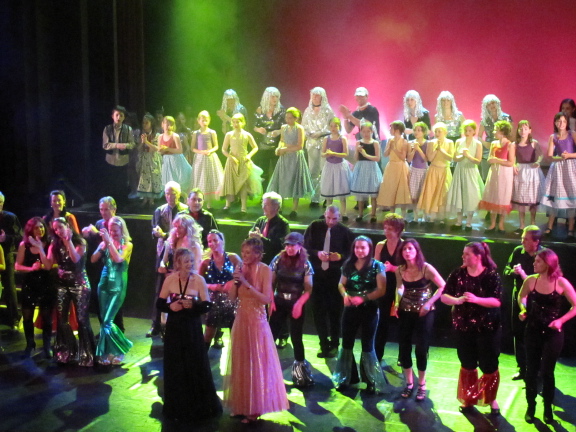 Thank you for the macarons, for giving them to me…

Perhaps not.  I have no idea how to put up video clips so it’s just as well, really.  A friend on Facebook thought I looked like a raspberry macaron, for a start.

Last week I resumed teaching piano again.  Now my life is complete with music back in the house after the long holidays. Before we split at the end of last term, I was stunned by the most gorgeous card fashioned by my mad-about-piano pupils.  Is that not the sweetest card you could receive? What talent – I just get too emotional, blub-blub. 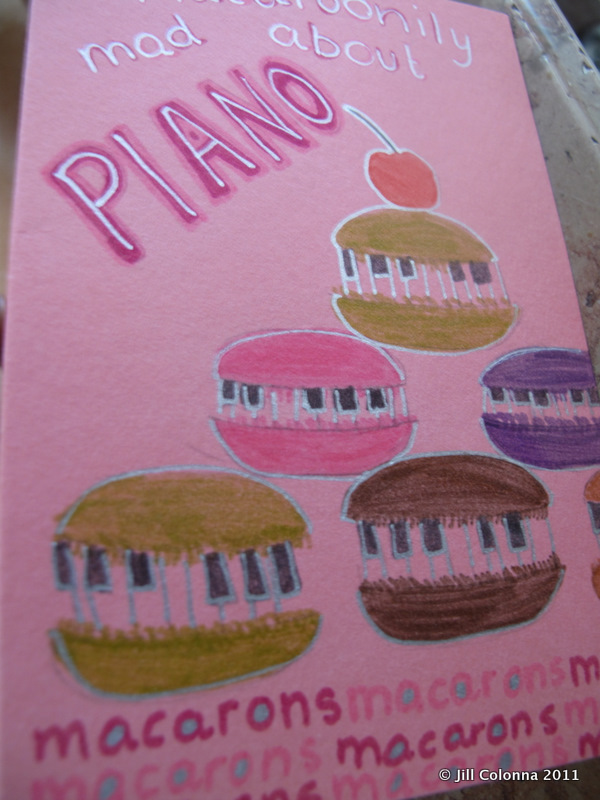 Artwork © by the talented Charlotte

I also received this most fun wee present: a macaron keyring.  It’s a permanent reminder not only of my wonderful students but that perhaps I belong to this mad macaron clan. 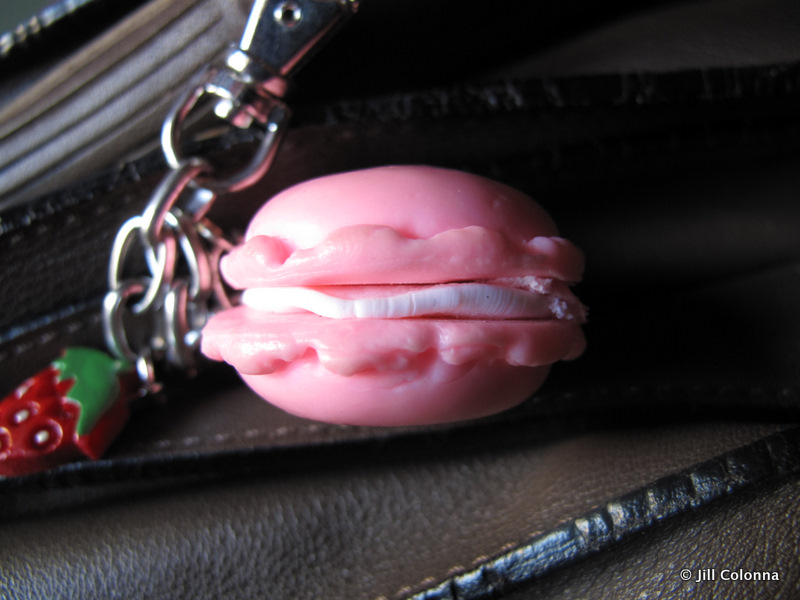 Speaking of presents, macarons tend to be a recurring theme.  The other day a good friend brought the latest macaron for me to taste from the Paris Pâtisserie, Pain de Sucre. Remember I went along with Adam from Paris Patisseries to watch them make macarons one morning?  Yes, that’s the place. 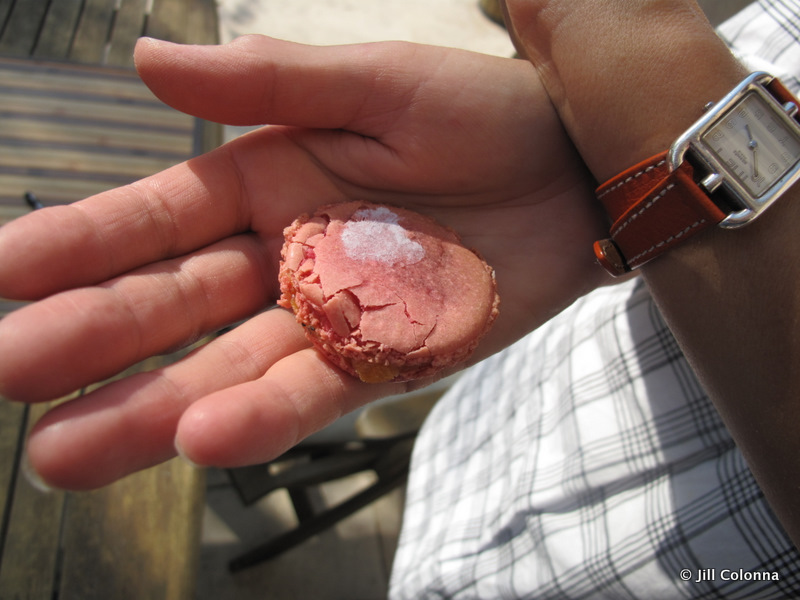 Did I make it in time for tea at quatre heures?

This friend is obviously a true friend: she walked around half of Paris – in this sweltering heat we’re having just now – with this rose, apricot and black sesame macaron in a paper bag.  I think you guessed it’s packaging, didn’t you? 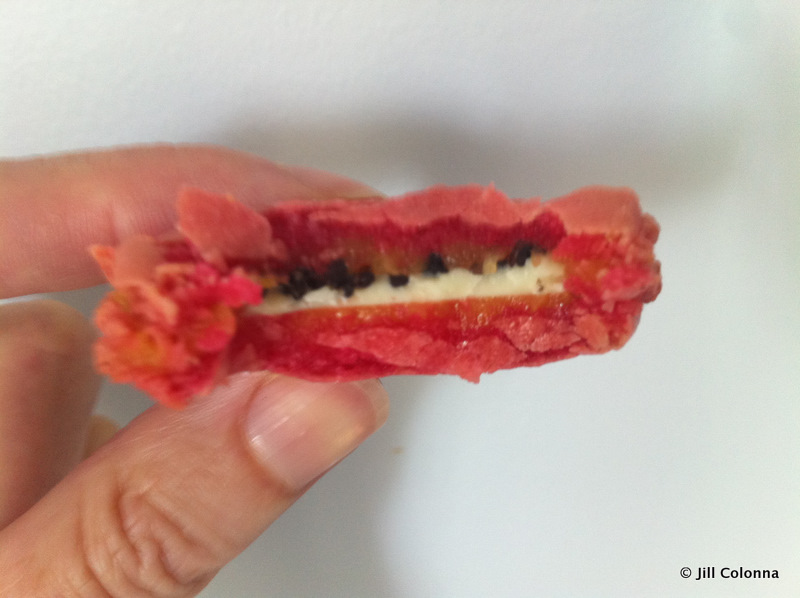 Apart from the distinct papery taste, it was inspirational.  Not sure about the black sesame seeds, as they just caught in the teeth BUT the flavours were beautiful.  Inspiration, indeed to make them at home when you have the crushed, travelled version. 😉 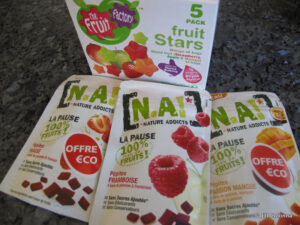 Next time I make rose macarons (see page 45 of the book), I’ll add some of these amazing little jelly squares from Nature Addicts.  In France, they’re all the rage at supermarket checkouts and the kids adore them.  I don’t know if they do apricot but they do an intense raspberry, which would be just right. In the UK, the equivalent is Fruit Stars, by the Fruit Factory.

During the holidays, I mentioned that I met up with Mardi of EatLiveTravelWrite for an afternoon of tasting pastries and tea.  What I didn’t tell you is that we popped in afterwards to the Chocolatier, Georges Larnicol – a Meilleur Ouvrier de France – in Paris.  Just check out one of his sculptures: a piano fashioned out of chocolate.  Don’t you just want to tinkle on the ivories – or rather, ivory chocolate? 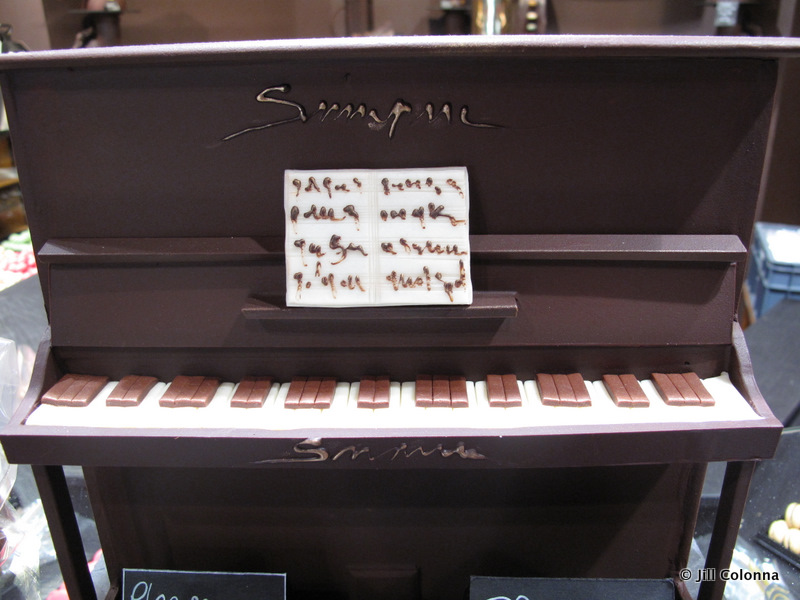 Music made to melt the senses

Then the other day I popped in to Georges Larnicol yet again.  I wanted a peak at that chocolate piano.  It had disappeared.  In its place was a baby grand, filled with the most colourful macarons. Now there’s an idea…

What would my piano pupils think if I stuffed the inside of the instrument with macarons? 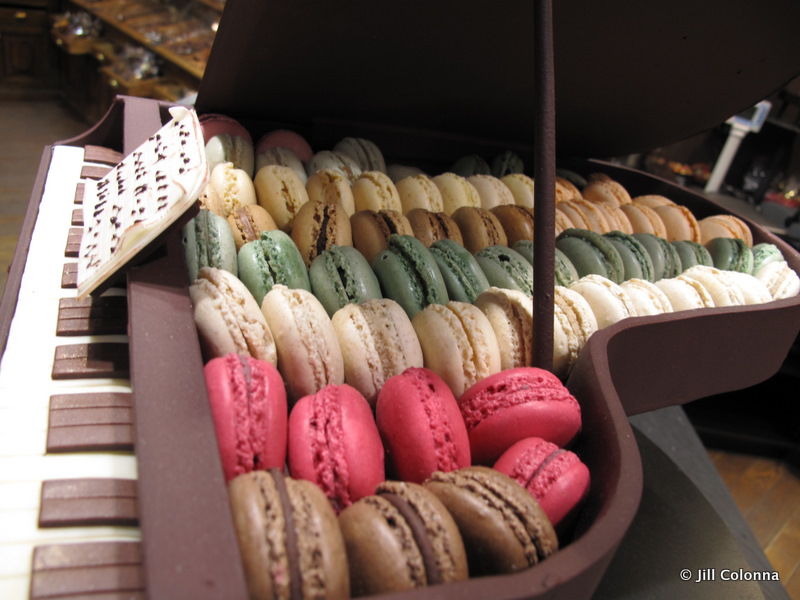 Perhaps they’ll just put it down to macaron madness.

Also, I SERIOUSLY want one of those macaron keyrings. Just saying….