Enjoy a taste of summer in France with this fig and almond pudding with raspberries.  Top with mini macaron shells for an elegant Parisian touch, to complete this easy gluten free dessert. 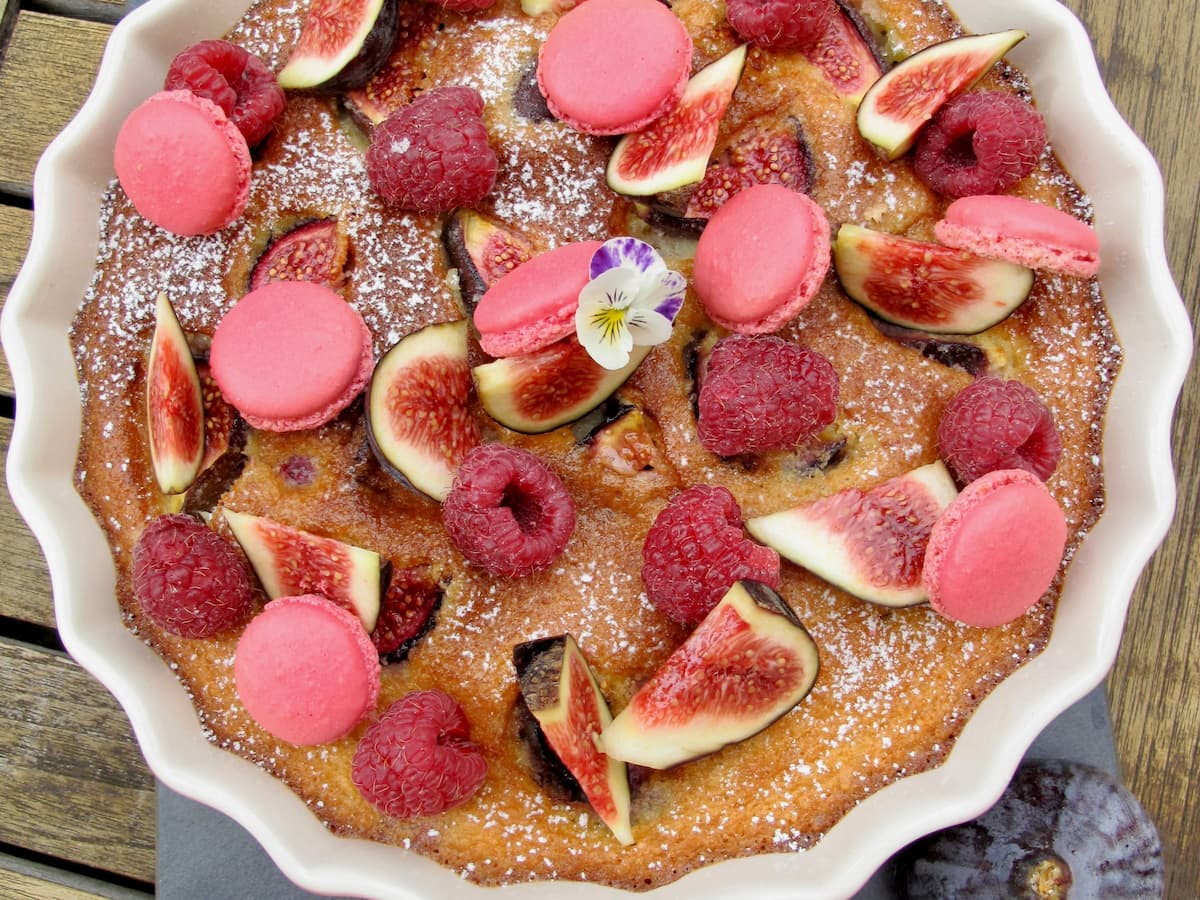 Autumn is trying to settle into Paris but I’m still not having it yet with this Fig & Almond Pudding.  Still grabbing on to the most plump of fresh violet figs from the market, raspberries top this to make a ridiculously easy French-inspired dessert with the addition of macarons. Moreover, this dessert just so happens to be gluten free.

This dessert was inspired by one of my favourite French celebrity pastry chefs, Christophe Michalak, as I was flicking through the summer issue of Fou de Patisserie. Some of his recipes are not that difficult to make – and this is so simple (if you know me by now, I believe in delicious recipes that are easy to make!) As figs are featuring in so many of the Parisian patisseries just now, something figgy had to be in a French pudding.

The magazine’s alluring photo showed an almond cream decorated with giant dollops of a blackcurrant and fig juice with grilled French brioche cubes. As I played around with the idea, thinking about how some of the ingredients could be prepared in advance – such as adding mini heaps of Corsican fig jam instead of the juice – it struck me that some mini macarons as decor would perfectly echo the almonds in the pudding. The result is wonderful!

I call it a pudding since it’s a dessert that’s a mixture of a soft cake with a pudding texture without the gluten. 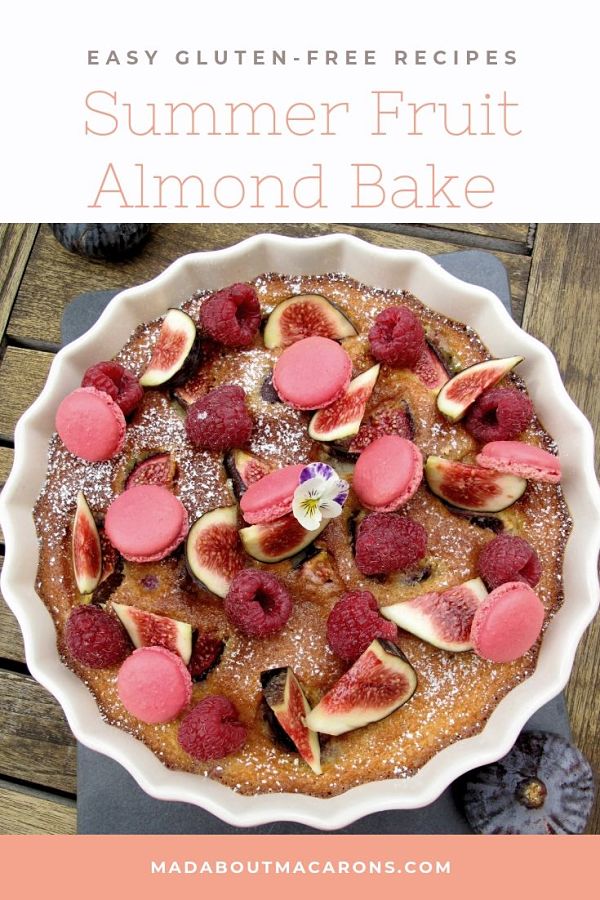 Macarons give it that extra French touch of elegance. By now I hope some of you have been making macarons from my books.  Why not make a batch of mini macs and save them in the freezer for dessert toppings, especially over the festive season? You’ll see how they will be so handy to have in your freezer bank! 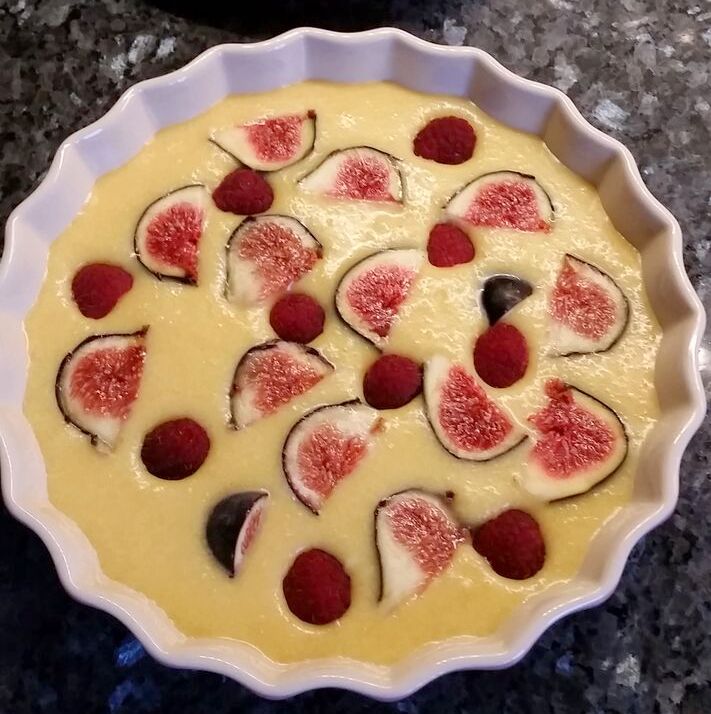 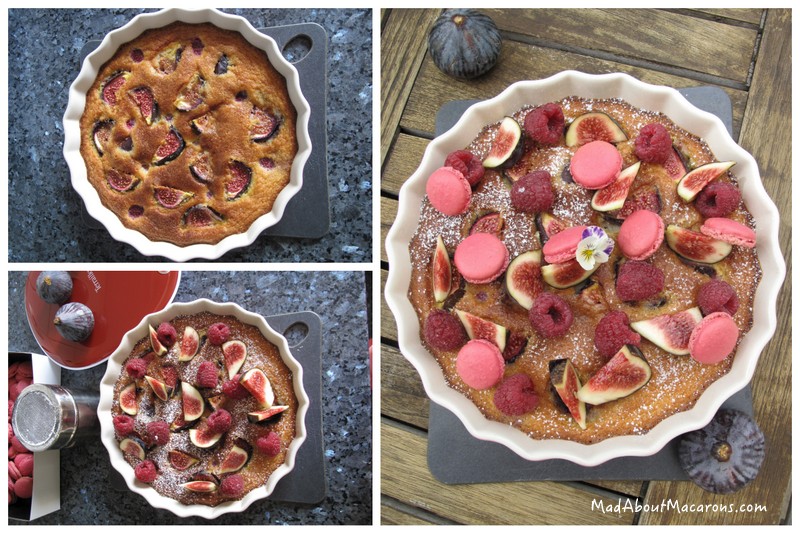 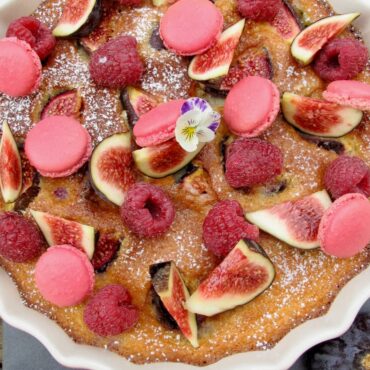 Serve at room temperature, not cold. Delicious next day for breakfast!
And if you want that extra few dollops to make a figgy pudding, then top with tiny spoonfuls of fig jam.
Share this recipe

I have to be honest: I miss your recipe notifications and don’t like not knowing when you’ve posted a new recipe or review 🙁 I’d love to have both the newsletter and your posts when you publish a new one. If you were posting 5x a week, that might be too much, but you have the perfect number of posts/week.

I’ve never had a figgy pudding and wonder if I’d like the figs baked in a dessert since I do like fig jam?! The raspberries and macarons are very enticing here, too! Yet another lovely creation, Jill! Brava!

If you love figs in jam then I’m sure you’ll love figs when baked in this pudding, Christina.
And I hear you on the email alerts for posts. If more people ask for it, I’ll look in to adding this too! Appreciate your feedback, it’s very helpful – thank you!

This looks beautiful Jill and love that decoration. I don’t bake much but even I could manage that, I think without the macarons. Although I heard your books are great so need to try them and see.

Yes, I used to receive your post alerts and am missing them since don’t know when you post anymore. What about instead of your monthly newsletter you change it to weekly? Just a thought.

Thanks Clara – I do hope you make this and who knows, you’ll make macarons soon with all the other treats in Teatime in Paris too.

Hm. Weekly newsletter? Good idea. OK anyone? What do you think?

How gorgeous, Jill! I’m visiting with my sisters in Colorado and it’s going to get chilly while we’re in the mountains. I’m not ready to give up on the warm temps yet. Hope you and your lovely family have a fabulous weekend.

Thanks so much Liz. I guess we’ll have to embrace that word chilly enough all too soon. Enjoy lots of girlie fun in Colorado!

Some mac inspiration for pink October’s breast cancer awareness. Please don’t forget to get yourself checked – or remind your loved ones.