How to Make a French Religieuse or a Scottish Mac Snowman

I have a confession to make. I should have made something more typically Scottish as it’s Burn’s Night this Friday. Patriotism is kicking in as the bagpipes, Stornoway black pudding and haggis are suddenly sorely missed. Don’t ask me to make the latter myself, though. You’re talking to an ex-vegetarian.

With a first mere dusting of snow last week, our lucky Scottish heather was then well and truly tucked in with a thick, snowy blanket this weekend outside Paris. We had more snow than in Scotland! 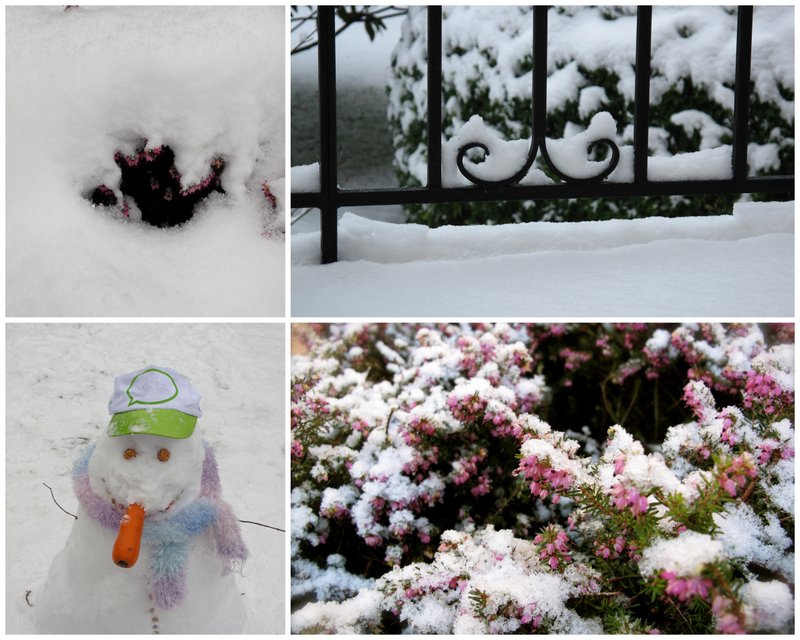 Lucie was itching to build a snowman and managed to convince her sister that it was still cool to play in the snow by repeating renditions of the Snowman’s ‘I’m Walking in the Air’ on the piano. What’s with the hat? A TGV cap was all we could find.

With a couple of lollies pour les yeux, they reminded me of the sugar eyes I’d bought at my favourite cake stores in Paris. 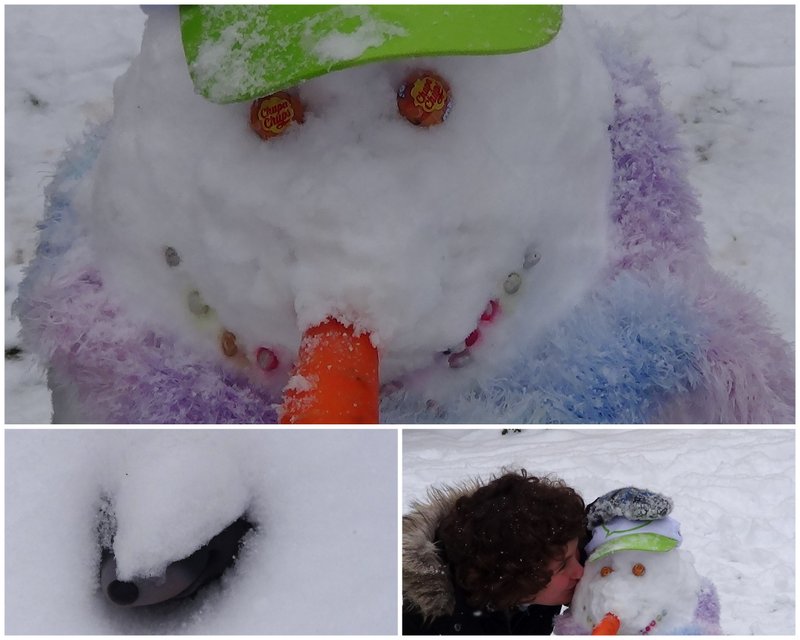 Am I a Scottish or French snowman woman person with a hat like this?

More macaron madness struck. I’d just made a batch of choux dough to make les Réligieuses: that’s one small choux bun stuck on a larger bun and dribbled with fondant.

Hm. Sugar eyes…  put them together with macarons (I had some left from my freezer ‘bank’) and what have you got? 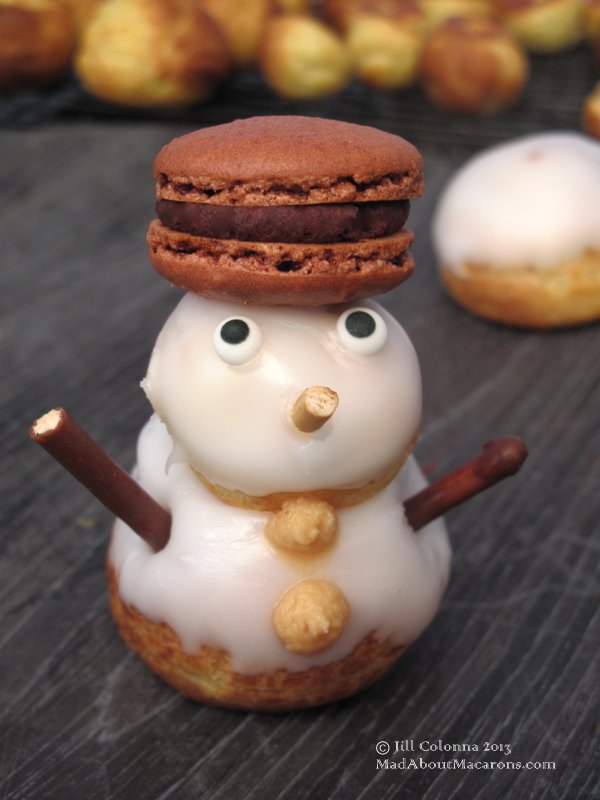 A Snowman built indoors! OK, so I’m not too old to kid around too, right? He’s a Religieuse Snowman. Hm. In French that doesn’t work since a Religieuse is feminine.

Somehow a Mrs Snow-woman doesn’t sound right, so apologies to my French friends for the Religieuse recipe title – I’d love to hear your ideas for a more fitting title. No surprise why Mrs Snowman looks a bit grumpy: I didn’t wait for the fondant to slightly set before dipping in the choux buns and so she’s dribbling fondant down her cheek. Next time I’ll be more patient. 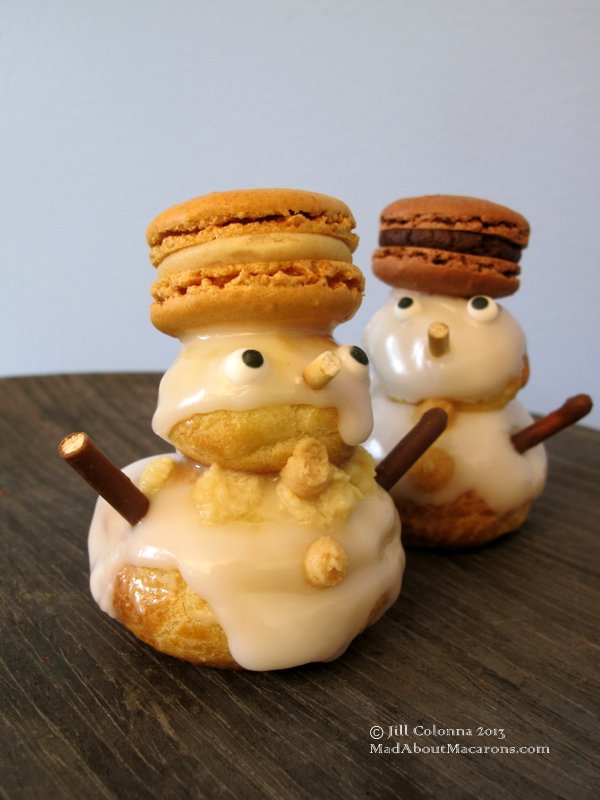 Does this fondant coat make my bun look big?

Follow the recipe for choux buns. Using a piping bag with a plain tip (about 10mm), pipe out large heaps on baking trays covered in greaseproof/baking paper (or Silpat mat.) Leave a good space between each mound, as they will spread out during baking. No need to glaze. Bake in a 180°C oven for about 20 minutes. Leave to cool on a wire rack. Meanwhile make a second batch of choux buns but pipe out much smaller heaps (as you would for chouquettes) and bake in the oven for only 15 minutes.

1. Boil the milk with the vanilla pod in a saucepan. Remove from the heat and leave to infuse for about 10 minutes. Remove the pod, scrape out the seeds and add to the milk.

2. In a mixing bowl, whisk the yolks with the sugar and gradually add the cornflour. Whisk until light and creamy. Gradually add the milk and extract, whisking continuously until thickened.

3. Leave to cool, whisking now and again, then transfer to a piping bag with a thin, plain tip (8mm) so that you can pierce the buns without too much leakage!

4. Pipe the cream into the buns by piercing a hole at the bottom of each bun and squeeze in the vanilla cream. 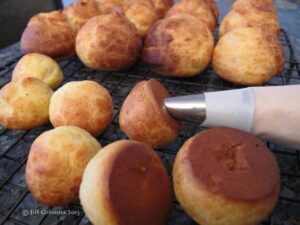 Gently melt the fondant in a bowl (white fondant is available from many speciality baking stores but if you can’t find it just make a classic icing using icing/confectioners sugar and some water.)  Once the fondant starts to cool, dip the buns upside down into the bowl until there’s no excess on the buns. Leave to set on a wire rack but first stick on the eyes (you could use smarties), pierce Mikado sticks for arms and stick on a macaron. 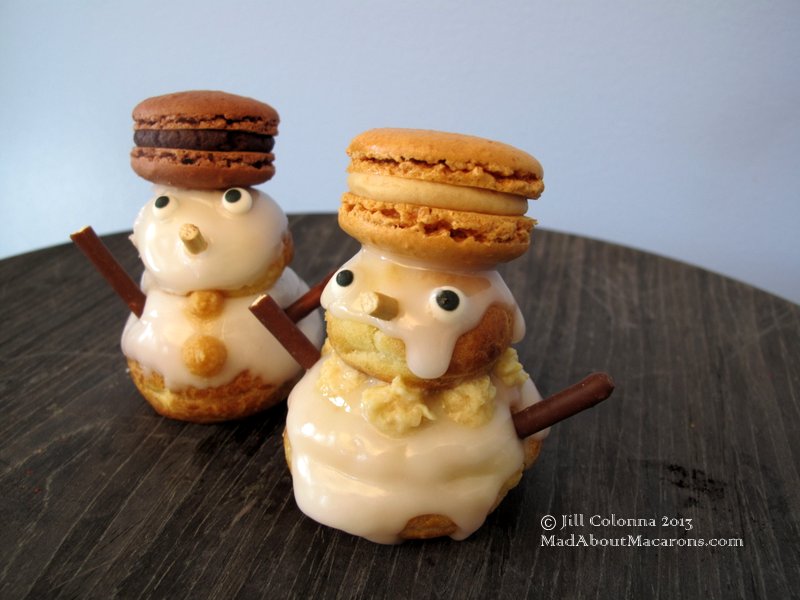 I forgot to take a photo of the vanilla cream inside. It was too good. You’ll just have to make them for yourselves! Here’s another reason why it’s handy to keep some macarons in your freezer. And now you’ve used up 4 egg yolks you have a good supply of whites for your macarons!

Perhaps this is a Scottish post after all: could we call it a MacSnowman?