“Do you like orangettes?” My friend, Francis was grinning, almost expecting me to react with a shrug and say, “Yes but I’m not their biggest fan, plus Antoine and the kids are not that hot on them either.”

Before I knew it, determined to convince me otherwise, Francis met me in Rue de Miromesnil (in Paris’s 8th Arrondissement) for a taste of Guy Perault’s speciality, Orangettes or candied orange peel covered in dark chocolate.  If you thought you’d tasted Orangettes before, then just try them again here. 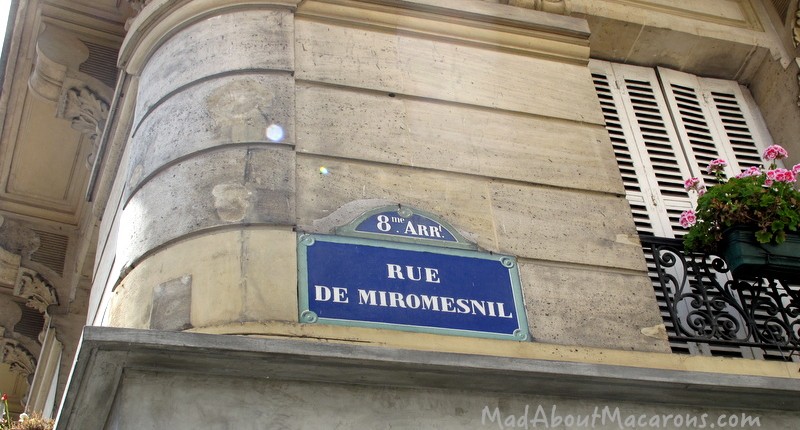 Growing up in Scotland, chocolate candied orange peel was my Granny’s favourite, my Mum’s favourite and chocolate gingers were always top of Gran’s list at Christmas. As they generously shared them, I would pass since they were a waste on me.  Do you remember Terry’s Chocolate Orange? Well I preferred stretching my pocket money on these popular flavoured chocolate segments with orange oil, wrapped in crinkly orange and silver paper, resembling a real orange; I thought it looked more appealing (or “a-peeling”?) but it was perhaps the packaging that spoke more than the contents. I can’t imagine there was much real chocolate or cocoa solids going on in that orange – or in these other orangettes, either.

Just opening the door of Orangettes & Co. heady wafts of chocolate and orange hit this distant memory.  With chocolate machinery right at the entrance and dark chocolate oozing out of a continuous tempering machine, this signalled a more sophisticated product – far from the industrial kind I had been used to. 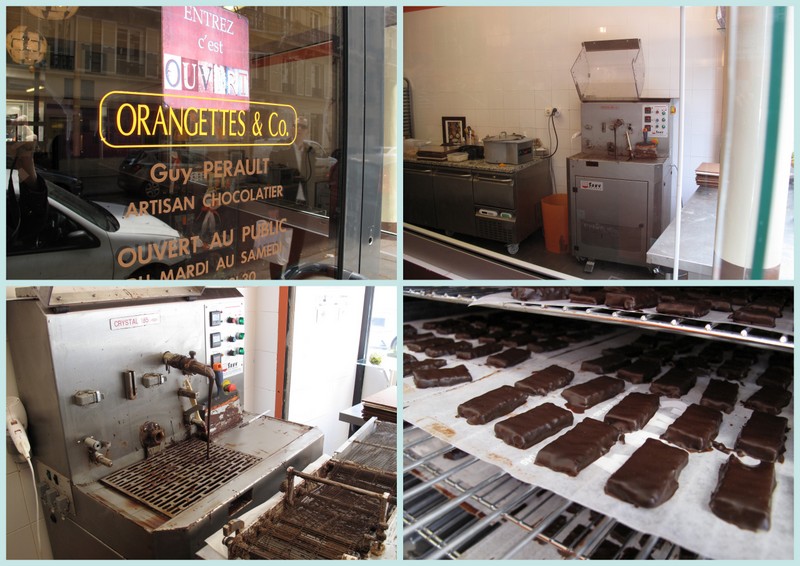 Monsieur Perault welcomed us into his small manufacturing shop, where his orangettes are considered as fresh products, using no preservatives. He dedicates his time to the laborious job of making the candied citrus fruits himself, selecting the best organic oranges from Spain, Sicily, Corsica and South Africa at the market in Rungis.

Although you can’t tell the difference in the taste of their origin once they’re transformed into candied fruit, the only telling factor is texture as a result of the thickness of skin. 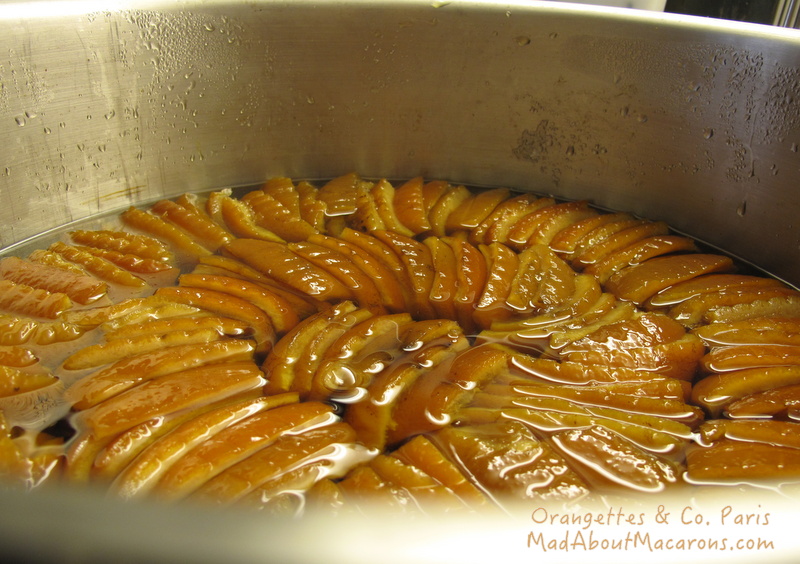 He took us into his tiny kitchen where the candied fruit are centre stage in a giant pot.  The jackpot is to replace as much water in the peel with sugar in order to concentrate the flavour and conserve it.  It can take Guy up to 10 days to make this happen.  It’s a real art: he checks the right proportion of sugar to orange using a simple weighing method called le pesage – Rolling Stones style!

We tasted the orange at the point when it’s just ready to be coated with chocolate. Mon Dieu! The orange wasn’t overly sweet, just concentrated in flavour and so soft that it melted on the tongue. 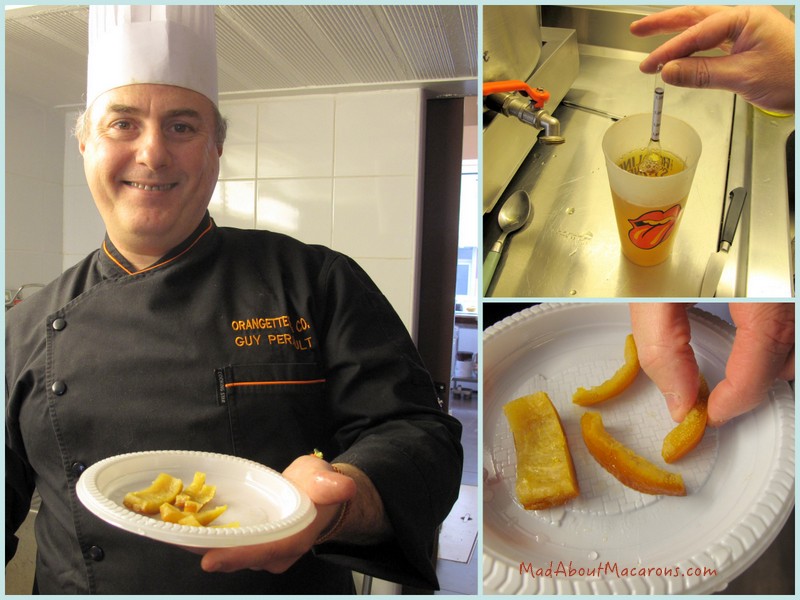 At this point he coats the peel with 73% good dark chocolate, which he gets from the Chocolaterie de l’Opéra (Avignon).  After trying different percentages of cocoa solids, he arrived at this one, which he feels compliments the orange beautifully.

Orangettes have a much thinner coating than you normally see for orangettes elsewhere.  He takes a bit of a risk with such a thin coating, as it’s more prone to pearls of sugar arising from the fruit. Guy Perault’s theory is that the chocolate should take second stage, as it should be the fruit that shines through. It’s true: elsewhere I’ve seen orangettes with a thick coating of chocolate: this makes it easier for the manufacturer to sell his product since it has a longer shelf life. 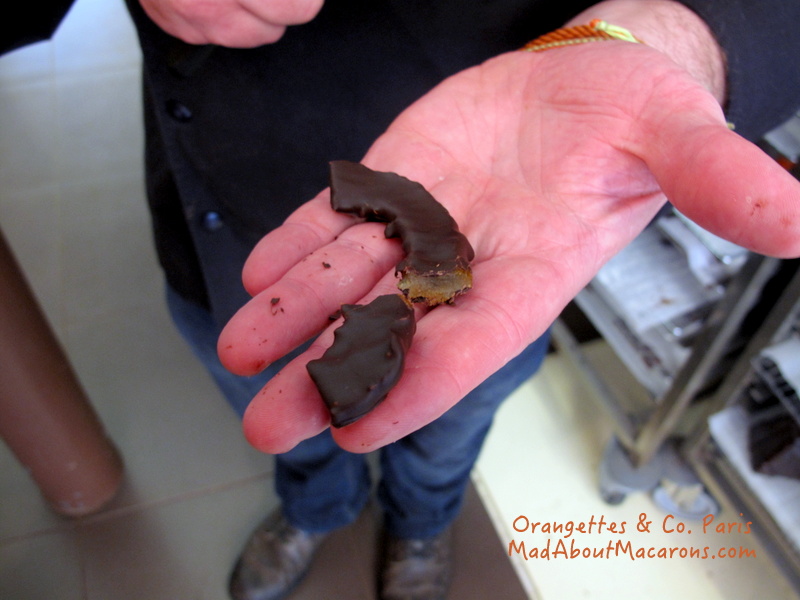 Guy doesn’t just make candy oranges: he uses the same procedure for his lemon peel (citronnettes), grapefruit, mandarine, bergamot, cédrat (Corsican over-sized, thick-peeled citrus fruits), ginger and also produces chocolate coated figs.  For lovers of After Eight chocolates, you’re in for a treat with the real thing here.  His mint leaves are not with a fondant centre but are fresh mint leaves taken from the middle of the plant, covered in egg white and coated with chocolate.  So thin, so dainty, so chocolatey minty and healthy with it. 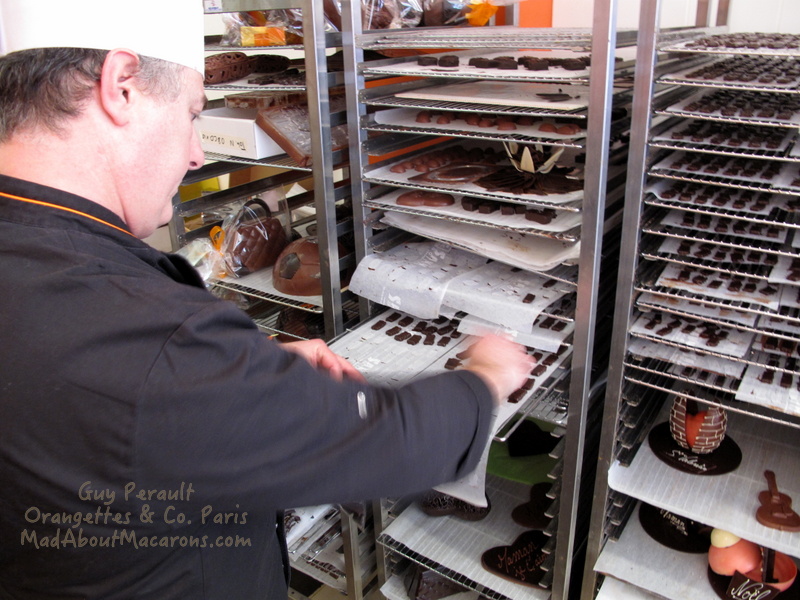 We tasted a mandarinette here.  I’m not the biggest fans of mandarines since there are so many pips but the flavour was so prominent – and concentrated like this, I’d rather eat them this way from now on!

I’m sure Gran was watching me test the chocolate gingers from above. Crikey! This is how I like my ginger with a real kick!  For ginger amateurs, he uses organic ginger from either China or South America, such as Peru or Chile and I can second that they have more concentration of flavour!  As it’s pretty strong, only one or two are just enough to have the flavour lingering… 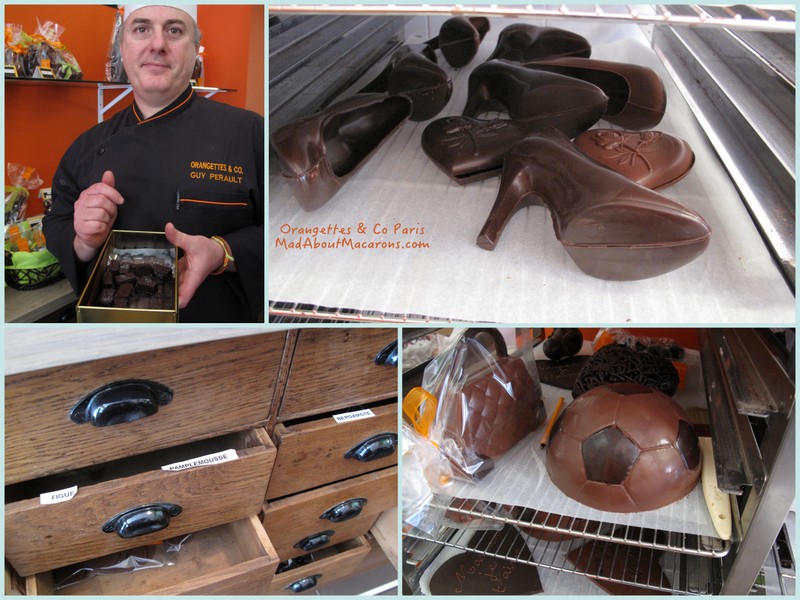 I love the drawers in his chocolate office. Now this is my kind of filing!

You can’t help but be impressed with the filing system here.  What about this for a shoe or handbag drawer? Sorry Antoine, but this is my kind of football. 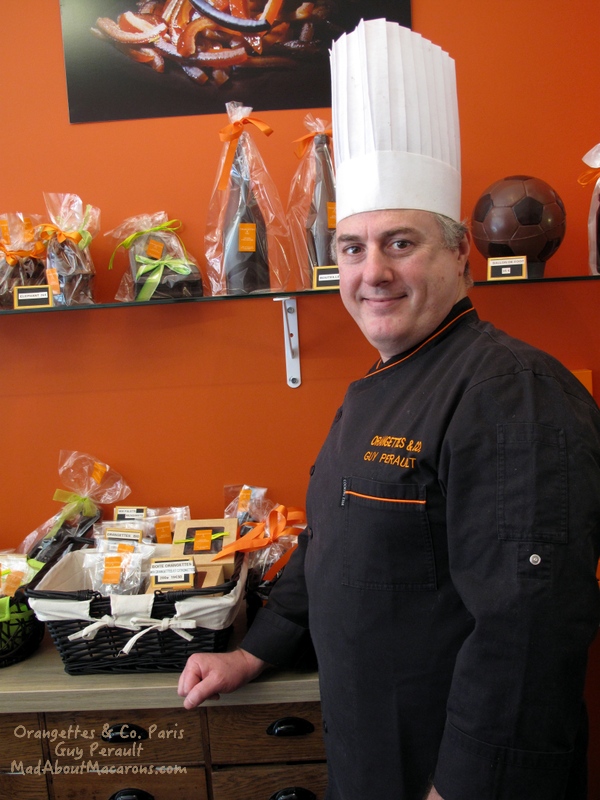 I couldn’t resist getting as much as possible for the family to try. Antoine’s first reaction was, “Why did you buy so many? You know I’m not that keen on chocolate orange peel ….”
Then he tasted them. It just goes to show that you can’t say you don’t like something until you try!

Although Guy recommended that we eat them all within 3 weeks, we were still nibbling on them 2 months later.  Not a sugar pearl in sight and I can tell you, I now love orangettes – particularly the citronettes, chocolate gingers and the wafer thin mint leaves.

So, if you like Orangettes, you must taste them; if you love Orangettes, this is a must stop in Paris!  And if you fancy taking part in a 2-hour workshop on Saturdays (up to 8 people max.), who you gonna call?  Monsieur Perault!