Looking for something delicious and cultured to do with the kids during the holidays in Paris? Take them to the Chocolate Museum – Choco Story Paris.  It’s not just interesting but there’s a chance to learn more and taste at the end of the visit. 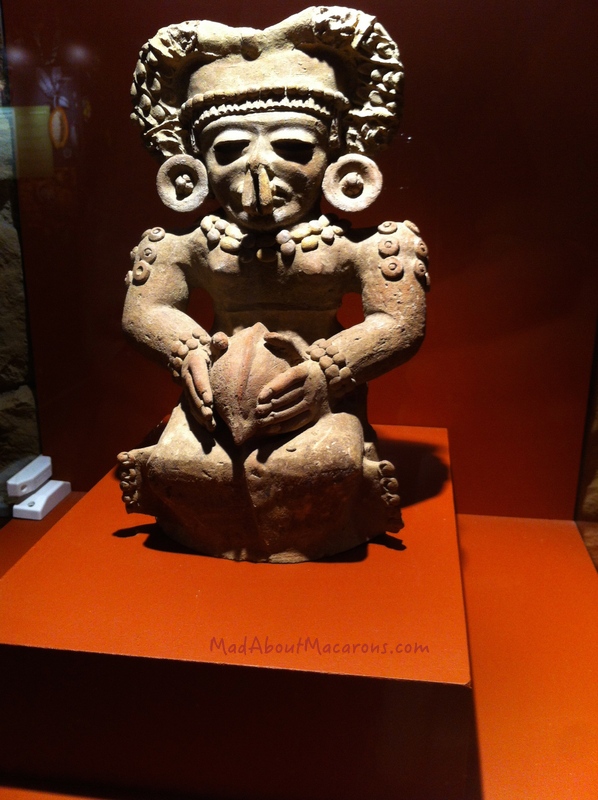 The Paris chocolate museum is well ‘spread out’ and presented on 3 floors.  When we arrived, we could sense it was the school holidays: groups of youngsters and really young ones were being taken around.  Whether they grasped the story of chocolate beats me, as the poor things seemed to be told off more than given the chance to listen.

Why the Name Cacao or Cocoa?

The museum’s ground floor covers the Mayans and the Aztecs,  starting out with questions where chocolate came from.  For example, “Why the name cacao or cocoa?”  Well different Mayan ceramic pots are decorated with glyphs which have been interpreted as ka-ka-wa.  Hence the word cacao or cocoa in English.

Why Do We Call it Chocolate?

Then why the name “chocolate”?  In Nahuatl, a language which is still spoken today by ore than 1.5 million Indians in Central America, cacahuatl is the word for chocolate: kakawa = cocoa, atl = water.  In the second part of the 16th century, however, the Spanish used the word chocolatl, taking the Mayan word chocol to mean hot and the Aztec word atl to mean water, which later became chocolate. 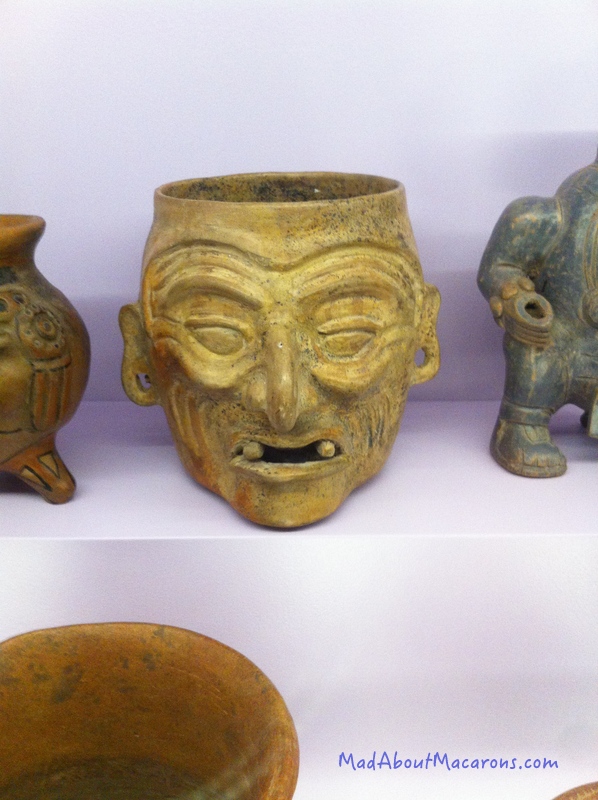 How Chocolate Came to Spain

The Mayans traded with cacao beans and so when Christopher Columbus saw this, he brought back the beans to Spain then, thinking they were bitter almonds, chucked them over his shrugging shoulders, thinking there wasn’t much they could do with them.

In 1519 it was the Spanish explorer, Cortez, that discovered the Aztecs drinking this bitter drink, chocolatl, from ceremonial pots.  King Motecuhzoma Xocoyotzin (I need a hot chocolate just to pronounce that one!) managed to produce 2000 large goblets of cocoa for his warriors.  It was a drink to fight fatigue and build resistance.  The drink wasn’t just bitter (vanilla and honey were added to sweeten slightly) but it was also spicy using mexican pepper, chili and allspice.  Thinking that Cortez was a feathered serpent god, the King offered him some of the royal potion and the story began…

Cortez finally brought cacao back to Spain in 1528.  Up until 1580, the Spaniards managed to keep this special drink pretty quiet by forbidding it to be exported and in 1580 opened the first cacao processing plant.  By this time they also added sugar and cinnamon to the spicy drink. 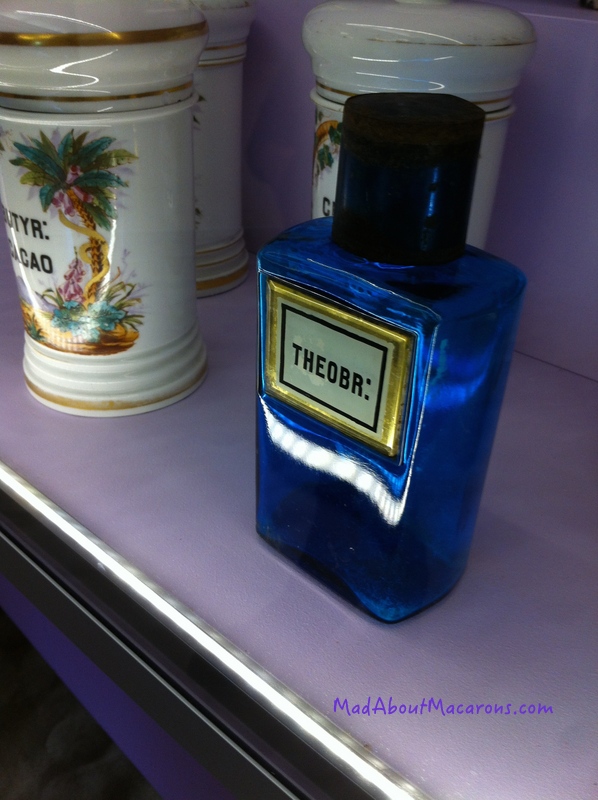 Fast forward to 1753 and the the Swedish scientist Carolus Linnaeus names the cocoa tree Theobroma Cacao.

In Spain, cocoa products were originally sold in pharmacies. When it came to France, it was given the same treatment.  Cocoa butter was also sold as ointment. 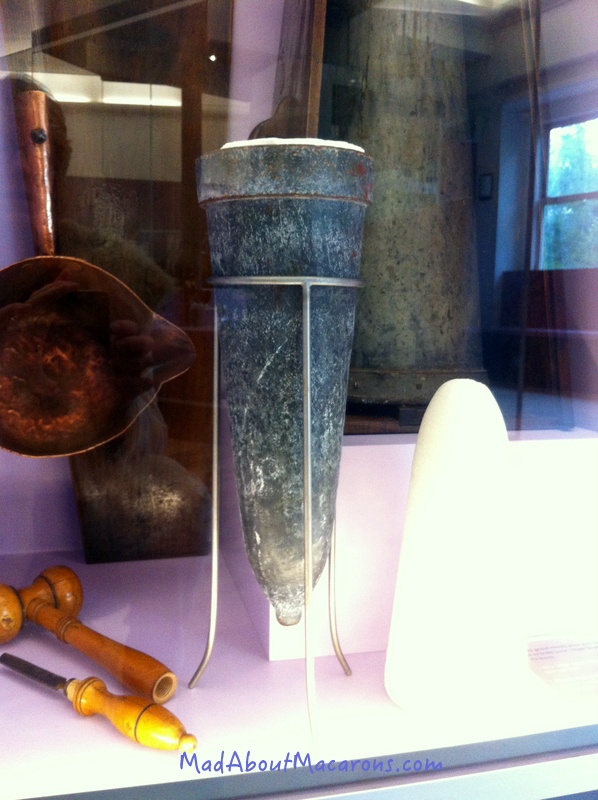 Sugar in the 18th Century

Sugar was obtained only from the sugar cane.  The sugar cane was pressed and the juice thickened into a very sweet liquid, which was poured into conical moulds.  After crystallisation, a cone of sugar was obtained.  This is how sugar was sold at the time, as it still is today in certain regions of Morocco. 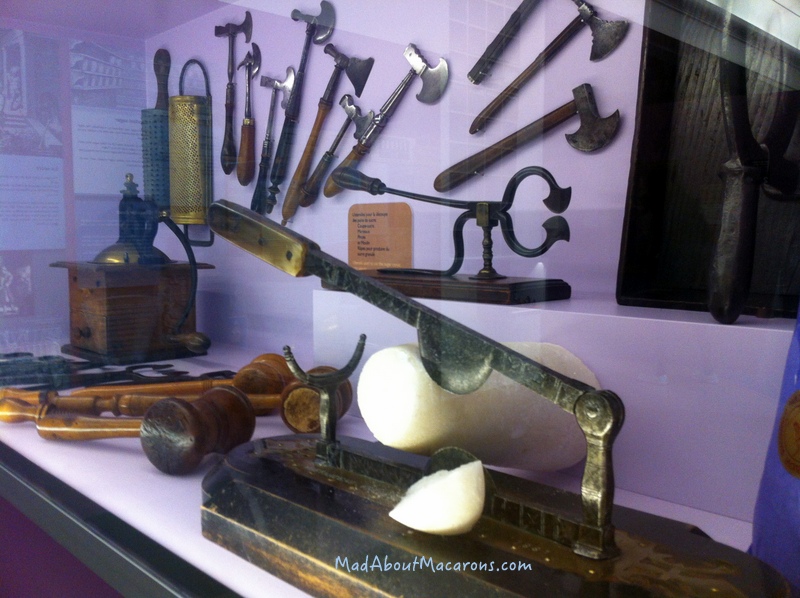 The sugar cones – also known as sugarloaf – or pain de sucre, needed some rather sinister looking implements to cut them!  For Facebook friends who tried to guess what this was over Hallowe’en, here’s your answer!

It was only by the beginning of the 1800s that sugar beet came to be used in Europe.

The juicy bits of history – when the chocolate drink comes to France via the royal courts and is then consumed as chocolate today – is missing here as this would end up being a mammoth post! 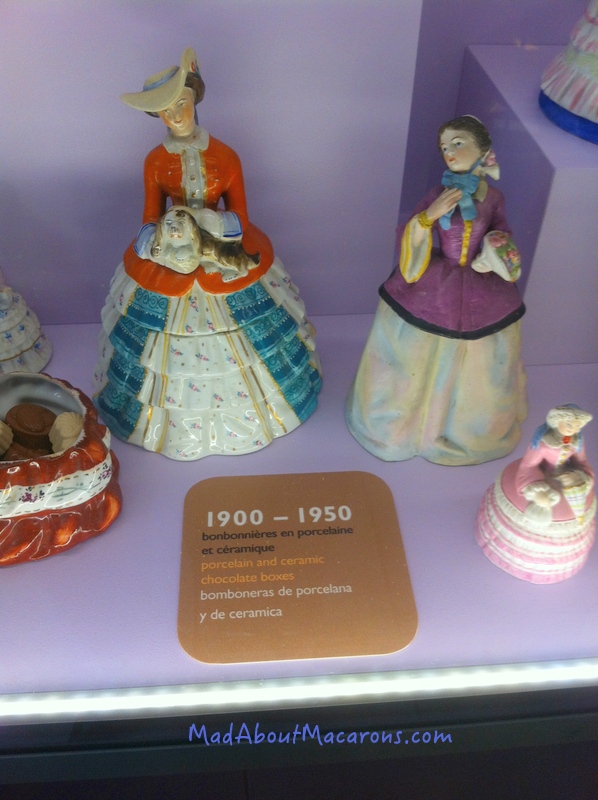 The top floor also covers the first adverts, chocolate in France and collections of pretty chocolate and bonbon boxes, porcelain or ceramic. 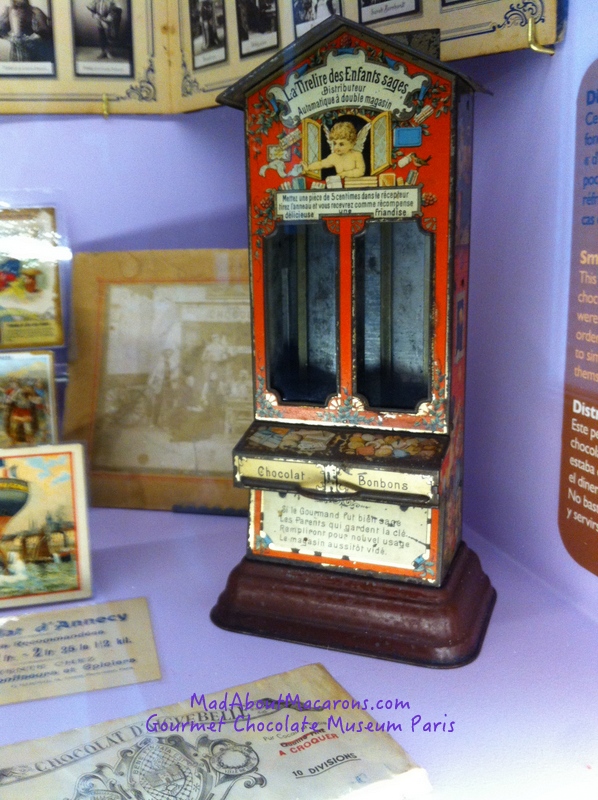 And rather interesting looking chocolate pots.  I particularly like this modern version from Marseille, complete with a Molinillo-style chocolate beater, or moussoir.  Although the pourer does look like a rather long talking point!  Chocolate as an aphrodisiac is also covered – it even goes back to the Mayans and Aztecs.  The kids seemed to spend a long time trying to understand this section… ahem. 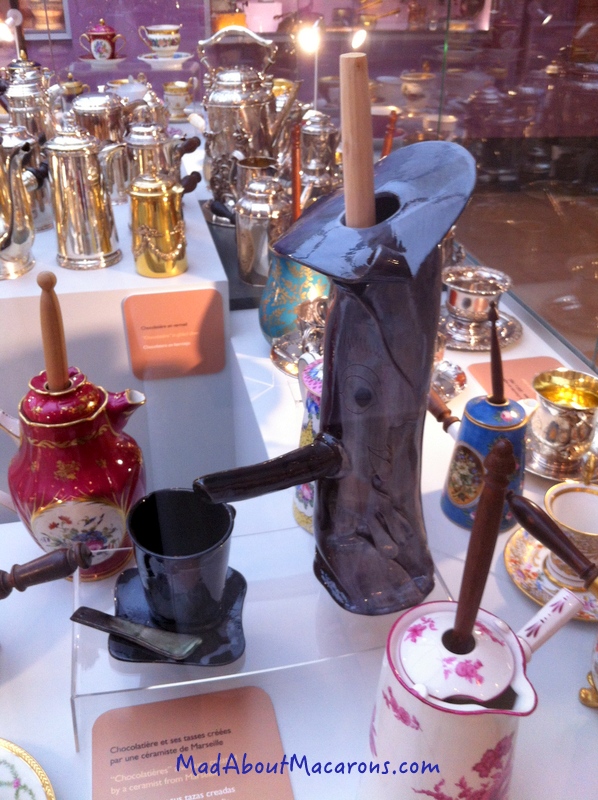 The Paris Chocolate Museum finishes with a short documentary film (which is needed, as the actual making of chocolate needs more emphasis, I felt) and a 15-minute demonstration downstairs.  Don’t be afraid to ask questions: my group were either too timid or too busy eyeing the samples offered.  The girls and I were too polite and took only one and missed the others.  Is that a British, “After you”.. trait?

I also bought the tasting of hot chocolate at the end of the visit for the girls.  They had a choice of flavour, including a more Aztec style of drink, full of spices which was more intense in chocolate.  The tasting takes place in the museum shop.  As it was in the holidays, it was quite crowded but nevertheless it’s a visit I do recommend if you would love to learn more about the fascinating world of chocolate.