Now that you’ve had a tasting of some of Lyon’s best Bouchons and bistros in my last post, now it’s time to cover Lyon’s best pâtisseries, chocolate and macaron shops.

What are Lyon’s Pink Pralines?

It doesn’t take long to discover Lyon’s most popular candy/confectionary speciality walking past the bakeries along the historic Rue Saint Jean in the old town and all around the city: sweetly welcoming windows are filled with bright pink pralines.

Les Pralines roses are simply coated almonds in pink coloured sugar. Although you can eat them tel quel (as they are), they’re traditionally used in pink praline brioches or in the local tarts (Tartes aux pralines rose).

With world-famous chocolate producer Valhrona only an hour’s drive south in Tain-l’Hermitage, it’s no surprise that Lyon’s chocolate shops are well covered (or well coated?).

If you do have the chance to venture to Tain-l’Hermitage during your Lyon visit, then why not visit the Valhrona Cité du Chocolat and chocolate shop (there are tons of chocolates to try – each time my husband goes in I have to drag him out like a little boy!). And just around the corner you could finish up with wine-tastings at Chapoutier and Jaboulet, while you’re at it. 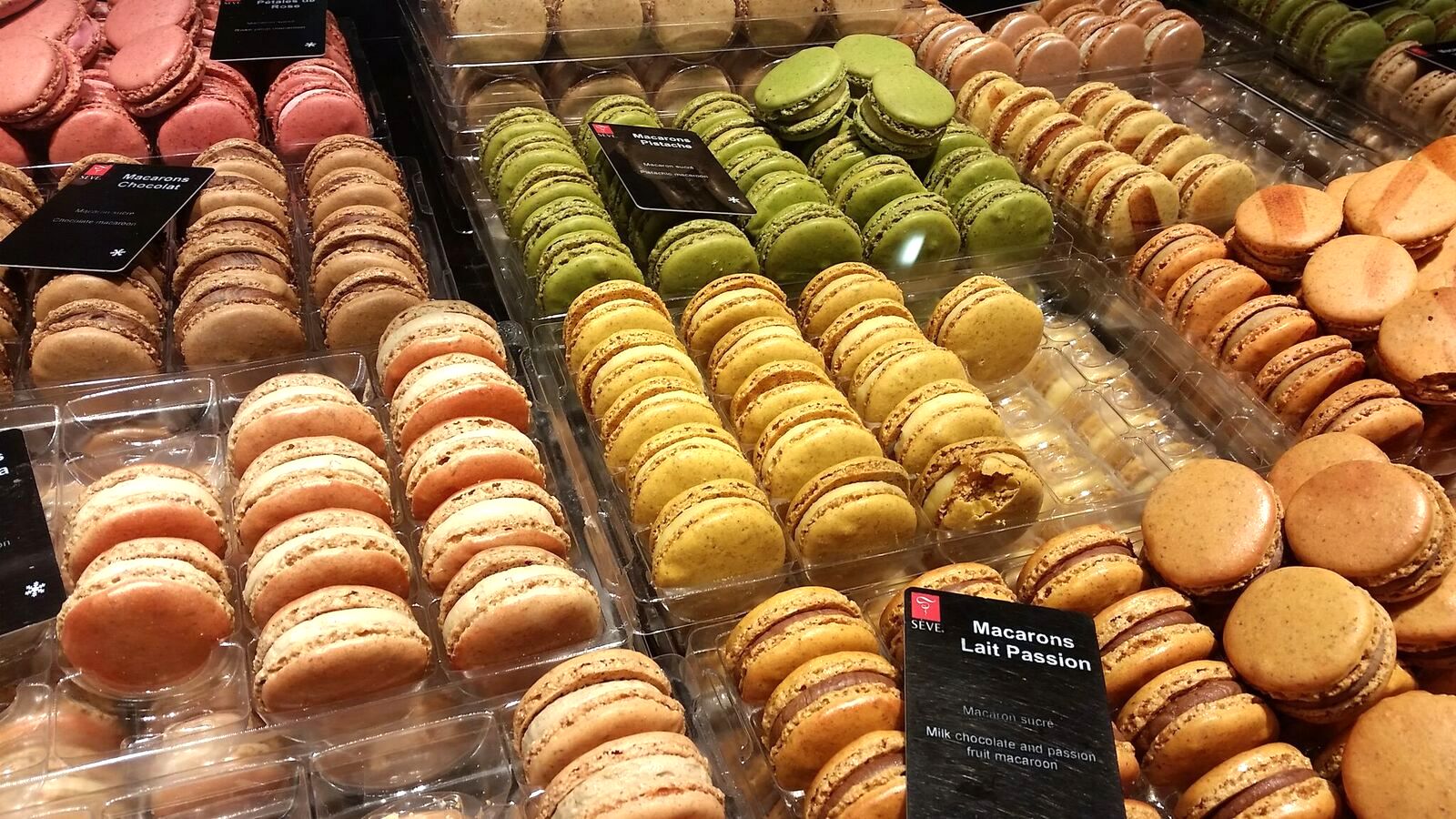 Bernachon specialises in making their own chocolate from bean to bar and there are many other award-winning chocolatiers around, such as Philippe Bel, Bruno Saladino, Bernard Dufoux, to name a few.

Richard Sève, award-winning chocolatier who makes chocolate from bean to bar, and pâtissier, was the first to come up with savoury macarons – something I am rather partial to myself (See chapter of savoury mini macaron recipes in my first book, Mad About Macarons). His first savoury macaron was with foie gras, a world first! He now has another chocolate shop and museum (MUSCO), which opened in October 2017. 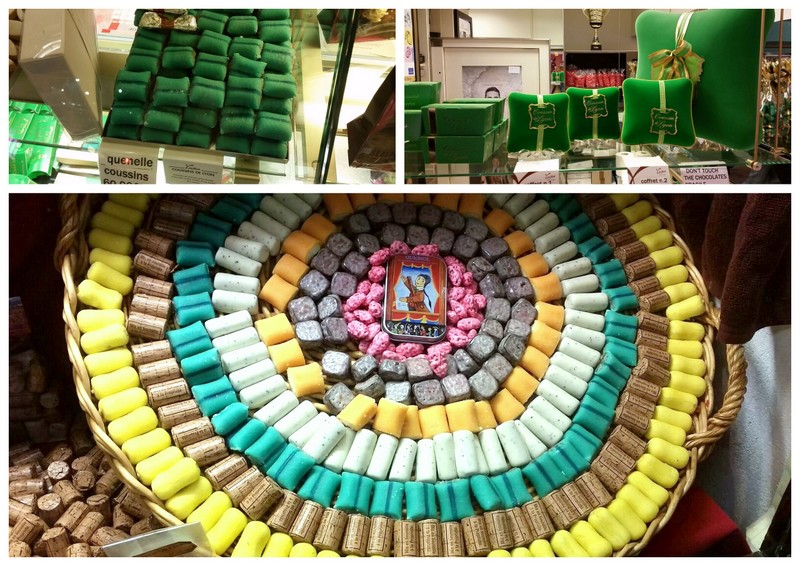 Since 1897, Voisin has been roasting not only chocolate beans but also coffee beans and are renowned for inventing the Coussin de Lyon, chocolate ganache covered in Curaçao marzipan, made a patrimonial French speciality in 1960.

If you can’t get to Lyon, then you can still find them in Paris in speciality chocolate shops (e.g. De Neuville) and at Le Bonbon au Palais (they come in pink and purple as well as the traditional turquoise coussins), along with other Lyonnais confections, such as le Bouchon (a cork) and le Cocon, resembling a more delicious kind of silk worm, in homage to the famous Lyonnais silkworkers – more on my French regional confectionary post here. 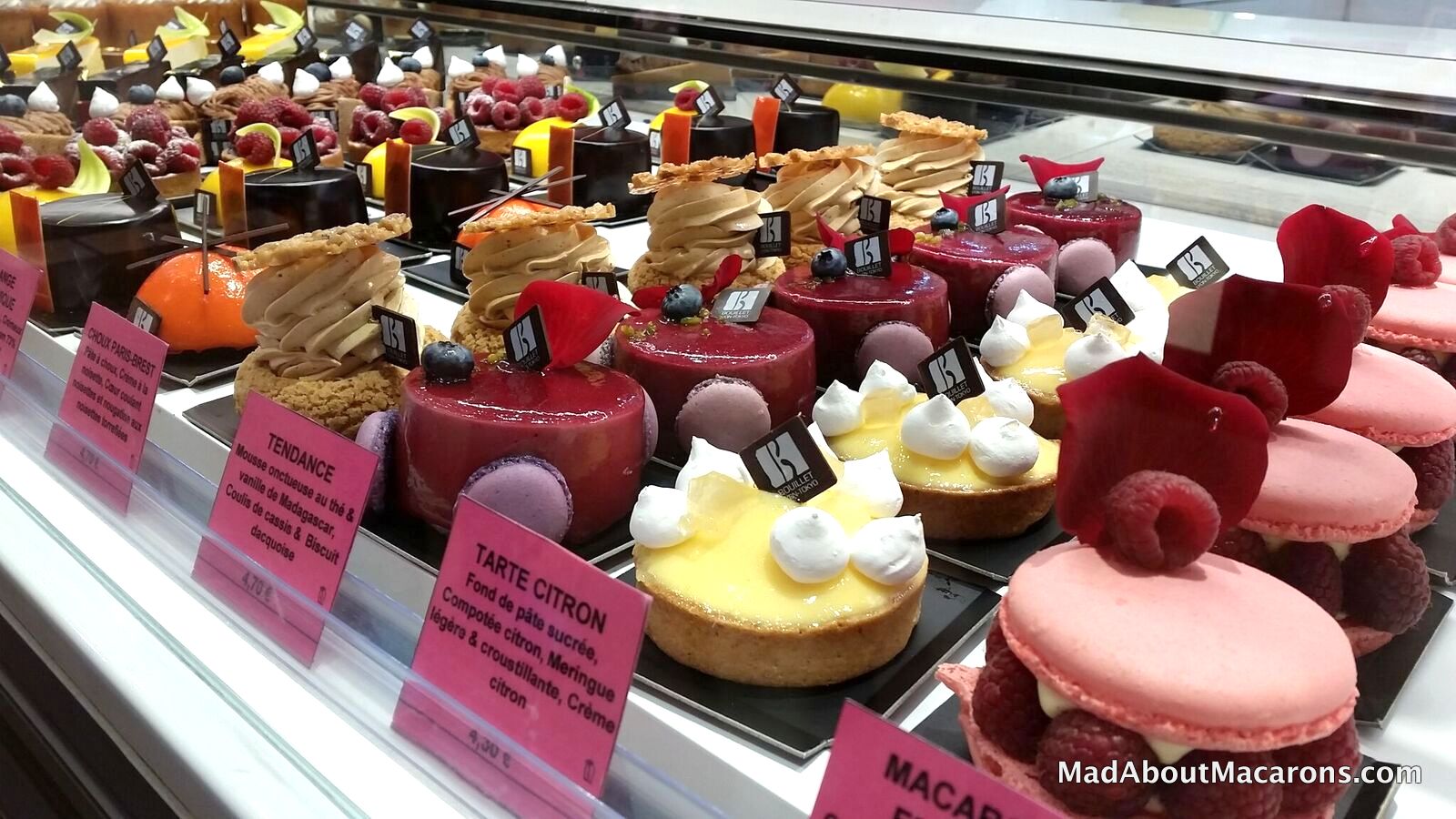 The family Maison Pignol, run by Meilleur Ouvrier de France, Jean-Paul Pignol, is a veritable gourmet oasis in such a gastronomic capital, covering traiteurs (delicatessens) to brasseries to restaurants – and his original love of traditional patisseries, from Paris-Brest to the Baba au Rhum. You’ll particularly love to stop at his patisserie in rue Emile Zola for a taste of macarons and 50 varieties of pastries and cakes. I shall be returning to Lyon since I can’t believe I missed his speciality, la Tarte Ecossaise (Scottish Tart)! 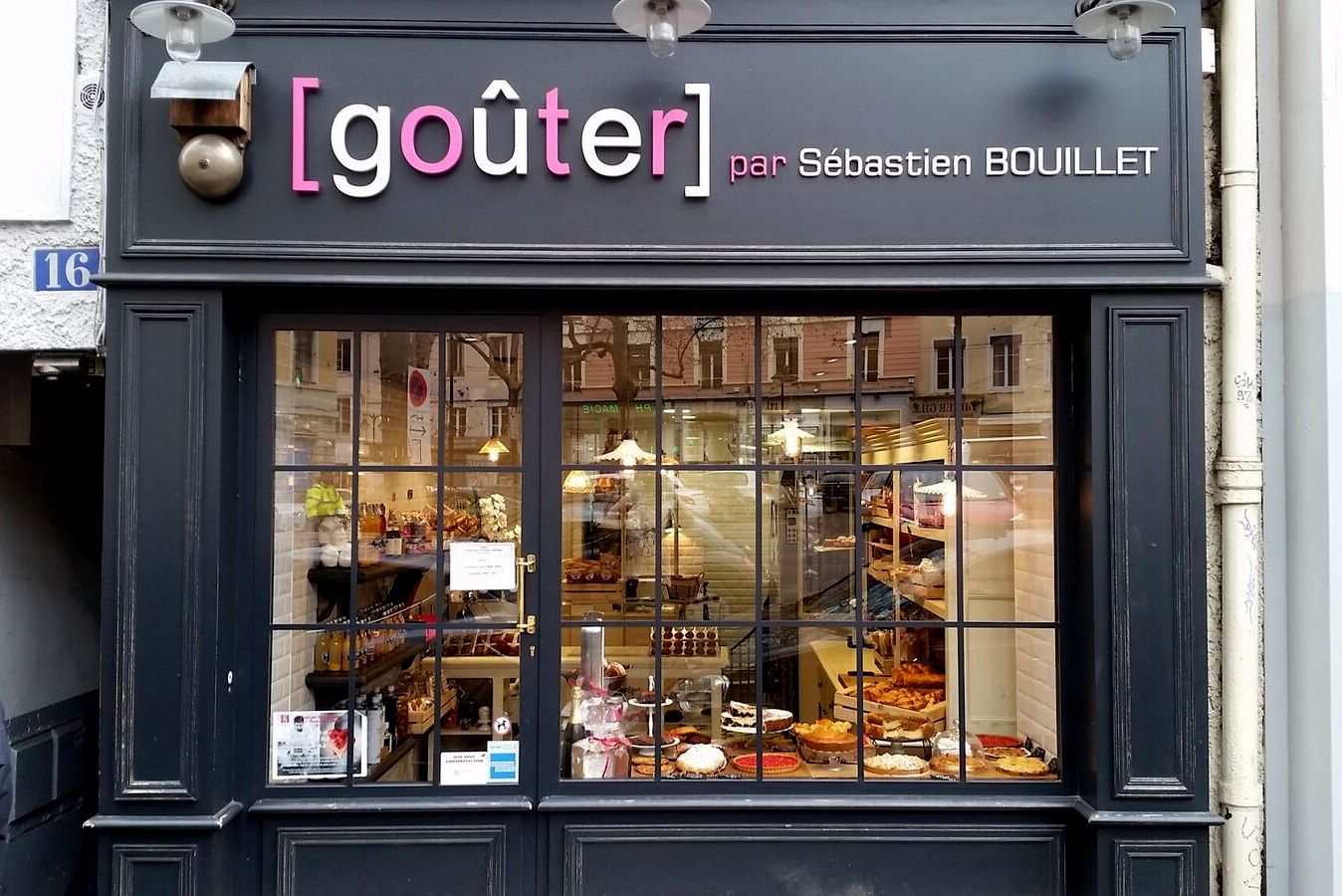 With echoes of yesteryear, such a charming window lures us in with cooling tarts and cakes winking at us behind the panes. Long cakes, a sausage-shaped tarte tatin and brioches are cut to size, as they’re sold by the length: imagine asking for half a meter of Tarte Tatin?

As if that’s not enough, buttery financiers and scalloped madeleines tempt us further at the counter (recipes for these are in my latest book, Teatime in Paris). 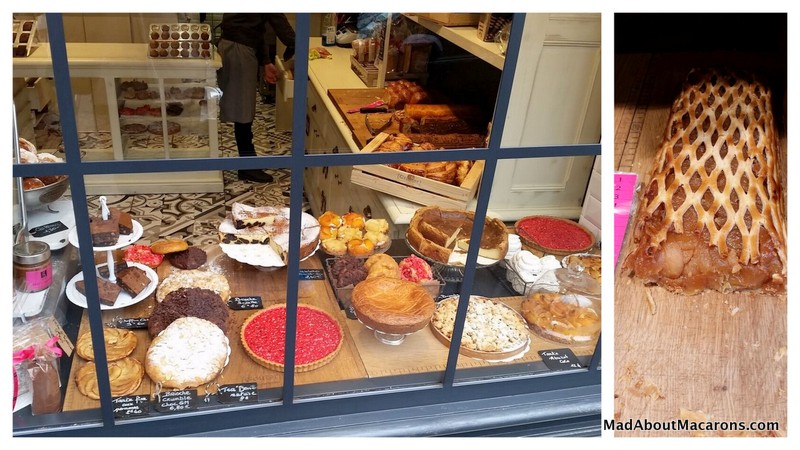 No gourmet Lyon trip can be complete without a taste of the famous Praluline invented by August Pralus in 1955.

Today François Pralus continues to make this sumptuously sticky brioche, rising in another league, using almonds from Valence and Piémont hazelnuts to create the most compact pink praline buttery brioche in the city. After working at Bernachon, François Pralus also makes his own chocolate from bean to bar – and macarons, of course!

If relaxing in a tea salon is more your style, then a great tea list can be found in Rue de la République at La Maison Debeaux (OK, I admit to being seduced by the Kama Sutra tea). They also do a great saucisson brioché (typical regional sausage-filled brioche), as well as a whole counter of tempting salads and savouries – for more on the subject, see my previous post on Gourmet Lyon. If you still haven’t had time to try pink pralines in any form, then you have no excuse, as Debeaux’s pinky goody selection would have Barbie in raptures. See my previous visit to Debeaux.

Moreover, Anticafé (9 rue du bât d’Argent, near the Opéra) is worth checking out just around the corner from Debeaux for its catching new concept. At Anticafé (like its sister in Paris), you pay by the hour: so sit back and relax for 5 euros with free included beverages or drinks and nibbles while you work or meet-up and, although not advertised, they did tip me the wink that they don’t mind if you bring your own doggie-bag of pastries from local bakeries.

After a taster of a selection, what would you choose? 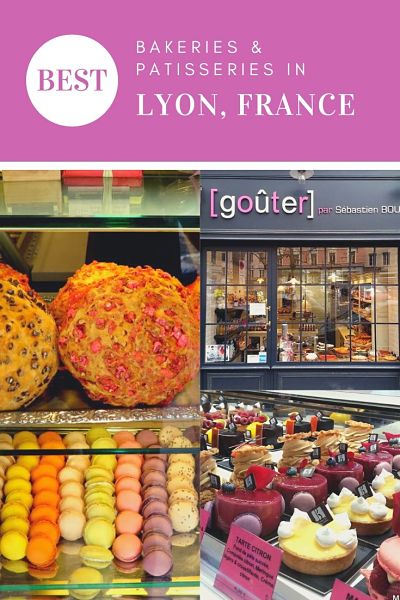 This post is not at all sponsored. As always, all opinions are my own.

I like the concept of Anticafe. Paying by the hour with free included beverages etc while you work should appeal to more and more people who need to meet up with colleagues they work with online. An added bonus would be to bring in a doggie-bag.

I can see, too, why it’s catching on Thomasina. There’s also one in Paris.

We saw a chococlate wall fountain when we were in Lucerne. I’d travel to Lyon to repeat that experience. The guys would love anything chocolate, but I’d love a slice of that tarte tatin.

They’ve been lucky to have a Mum that makes so many chocolate recipes, Liz! I love that tarte tatin in that you choose it by the metre – my kind of size…

Lots of fun to read, Jill! Love it!

Thank you, Betty. Love having you pop in and thanks for sharing on Twitter. Much appreciated x