Welcome to le Bonbon au Palais. A visit to the best sweet shop in Paris with examples of candies and confectionary from all regions in France.

I literally stumbled into this sweet shop the other day in the 5th Arrondissement.  It was raining cats and dogs and, instead of taking the metro back to Châtelet, drifted with the howling wind as it directed me downhill like some kind of sweet calling. The sudden sight of glistening jars filled with chocolates and bright pastel confections halted my track and lured me indoors. I stepped back in time like a curious, mesmerised child into this haven in Paris.

I remembered Carol Gillot of ParisBreakfasts talk about this sweet shop and its owner, ‘Professor’ Georges. Well, here he was in person, proudly presenting his range of the best regional and artisanal sweet delicacies from around France all under one roof. As he says on the giant blackboard, life is much more beautiful with sweets or candies.

With Brassens (another Georges) singing and strumming his guitar on the vintage radio, Georges opened several giant apothecary lids as he explained some  delicacies while I tasted and relished in the jolly Georges ambience. 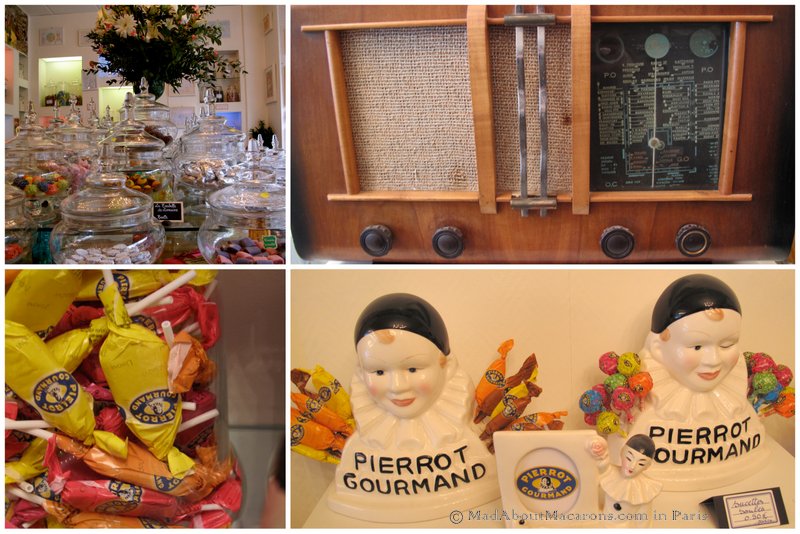 Georges Evrard created the Pierrot Gourmand company in 1892 and invented the first lollipop in 1924.  It was also one of the first companies to envelope lollipops in printed paper. The milk caramel was the original flavour, nicknamed ‘Pégé‘ for P.G.  Pierrot Gourmand now sells around 140 million lollipops each year. 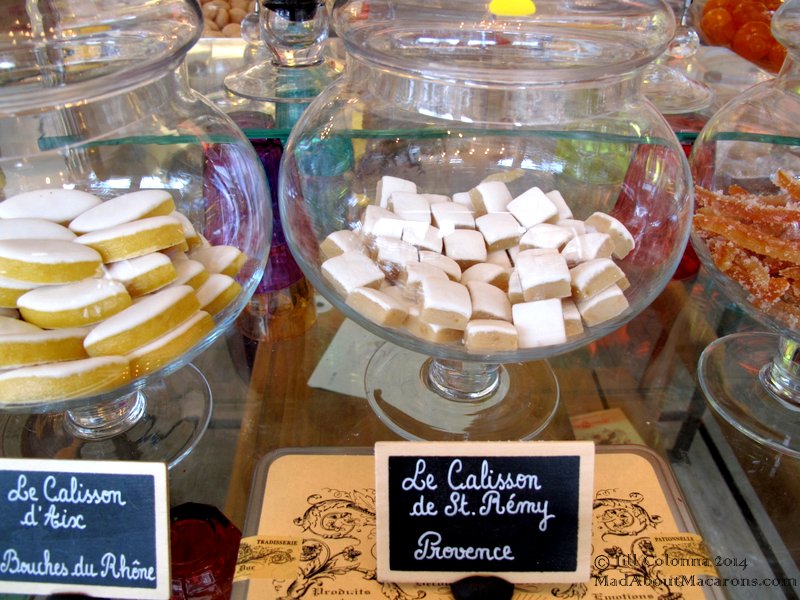 How many times have I visited family in Provence but I never knew about the Calisson de St. Rémy?  It’s not quite as sweet as it’s popular and brighter yellow oval Calisson cousin since it’s made with different almonds.

Mother-in-Law in the Vaucluse has certainly never introduced me to these spicy sweets, either. Instead she orders traditional candied fruits from Apt from the factory shop by the kilo.  I’ve still got two kilos of candied ginger and orange peel left to add to desserts and macarons.

I’ll have to return with my girls and our pocket money. There’s so much more to learn about French candies. Meanwhile, I’m hiding my Bonbon au Palais bag under my desk like a naughty squirrel. Georges said these delicacies can keep for up to 6 months so all the more reason for me to keep them aside and savour them on the palate (notice the play of French words with palet/palate and palais/palace).

Like this wonderful moment.  I’ll tell you why next time, but meanwhile we’re finally off on that summer holiday we cancelled last year.  I just need to taste another téton de la Reine Margot, just to ensure my chocolate palate gets the taste of orange and the Cognac.

17 responses to “Bonbons! The Best French Candy Shop in Paris”