This sign popped out to say bonjour as we were meandering on a mid summer’s walk in Rhône wine country. Can you imagine living in a street called Brioche lane? I’d personally feel compelled to have brioche dough out on the window ledge, puffing up proudly for the tourists that passed (that’s the dough not me), inviting everyone to have a part in making it.

I make brioche most weekends and so it’s about time I shared this with you. Surely you don’t want macarons ALL the time, do you?

The golden rule with brioche is take your time. It’s so simple; but if you’re in a rush, forget it. If you’re multi-tasking, I wouldn’t recommend this either; on a couple of occasions I’ve completely forgotten the dough rising and 2 hours later – rushing back from Jill the taxi and a last-minute shop – discovered brioche dough oozing down the side of a radiator or above the oven sticking to the door, as it was rising in all its glory. Sir Brioche prefers to be treated with more respect and not just fitted in to a last-minute schedule.

Depending on your mood, you can add all sorts of sweet surprises (see step 4). This is the part that the kids love to join in and create their own combinations; especially claiming their own brioche ‘ball’ with additions such as chocolate chips, walnuts, pistachios, cranberries, orange peel, drunken sultana raisins (either steeped in more orange flower water or Earl Grey tea overnight or in rum or in kirsch.) The list is endless, so it’s great to keep changing the ball game.

By the time the children come home from after-school activities, the smell of brioche wafts around the house and the weekend is signalled. Oui! C’est vendredi! TGIBF (Thank Goodness it’s Brioche Friday) We have 2 large brioches to last us for breakfasts over the weekend. I can’t help puffing up with pride, seeing them so happy. Speaking of brioche dough like tennis balls, I’m also proud to be a Scot with Andy Murray winning the US Tennis Open at Flushing Meadow – great going, Andy!

Who’s been pinching the pearl sugar?

The first secret is to take your time. The other golden rule is to ensure your eggs are at room temperature. The rest is a piece of brioche. I make brioche using a stand mixer, but I used to make it just as well by hand. This recipe originally came from the Alsa Briochin yeast packet instructions! Over the years, I’ve adapted it and our favourite addition is the orange flower water. The brioches also freeze well.

1. Mix the flour, salt, sugar, vanilla sugar and yeast in an electric mixing bowl and make a well. Attach the dough hook and start mixing on the lowest setting.

2. Add the warmed milk, orange flower water and then the eggs one by one and mix well until you have an even dough. Gradually add the melted butter (leave a bit to butter the brioche tin if it’s not silicone), mixing for at least 20 minutes until the dough doesn’t stick to the sides of the bowl.

3. Cover with a clean dish-towel and leave to rise in a warm place (24-35°C) for an hour until it looks like this. 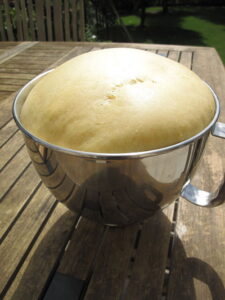 4. Knock down the dough and if you’re adding chocolate chips, nuts, or candied fruits, mix these in. Divide the dough in 2 and transfer each dough ball to brioche tins and/or cake moulds, dividing the dough into tennis-sized balls and sprinkle with the pearl sugar or toppings of your choice. 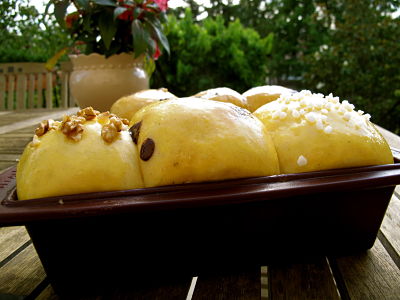 Arise, Sir Brioche. Puffing up before going in the oven.

5. Leave again in a warm place for another hour until the dough rises to the top. 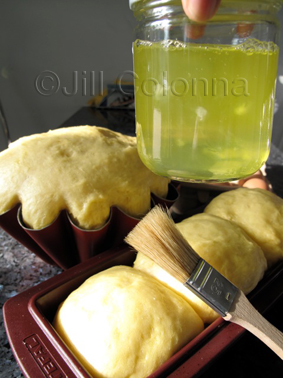 Adding to the whites collection for macarons!

6. Preheat the oven to 160°C. Brush each brioche with egg yolks mixed with a bit of water to glaze and bake in the oven for 25-30 minutes until golden. If the brioche browns too much, cover with greaseproof paper halfway through baking (although we prefer it browned, just how they serve it in our local boulangerie.)

7. Leave the brioches to cool on a wire rack.

Let the brioches rest for about an hour before devouring; straight from the oven and it will be too yeasty. Sometime plain is best, just with the traditional pearl sugar or a toasted nutty topping – that way you can serve with lashings of homemade jam (see recipe for apricot and lavender jam.)

What kind of goodies would you hide inside or sprinkle on top of your brioche?

I would love to live on any street named after a baked good/pastry! Your recipe looks fab–can’t wait to try it. 🙂

Isn’t it fun, Amelia? Hope you get to try it – no doubt you’ll make it into clever jewellery of yours!

Ahhh, how I love Brioche!! I haven’t made it in quite some time, however when I do the kids gobble it up in no time. My son has discovered his love of jam, and on our vacation last summer had a real brioche with strawberry jam. His new love! I will have to surprise them one of these days. Thanks for this recipe!

There’s nothing more precious than surprising kids, eh? Love it when their faces just light up so hope you can make this soon with his favourite jam, Kim.

Wow I can smell how delicious this is from across an ocean.

So the scratch and sniff application works, Lora?

Home cook and author of 2 pâtisserie recipe books, I’ve lived in Paris since 1992 with my French-Corsican husband and family. With 30 years of family food training, here are my easy, healthy recipes and local food guides.

Stay connected with the free monthly newsletter from Paris. Next out in August.

Berries, fresh herbs, tomatoes, melon, peaches and apricots are in season around France. Plums and figs are now joining in! Join me at the French market with fruit and veggies and healthy recipes.

Looking for chilled celebratory desserts? Try a French Vacherin ice cream cake – to a chocolate mousse or crème caramel and garnish with berries or cherries!