We love jam – on bread, a fresh crispy baguette, brioche, crêpes or as a filling in macarons. But mention Corsican fig jam, and it takes on another delicious yet serious role. Fig jam is so popular in France’s island of Corsica for a reason. It’s a must on a cheeseboard and goes particularly well with strong cheeses.

Following a generous wind-fall of figs from our neighbour this season, it has given me a chance to experiment. Let me share my new reduced-sugar recipe, inspired by science. 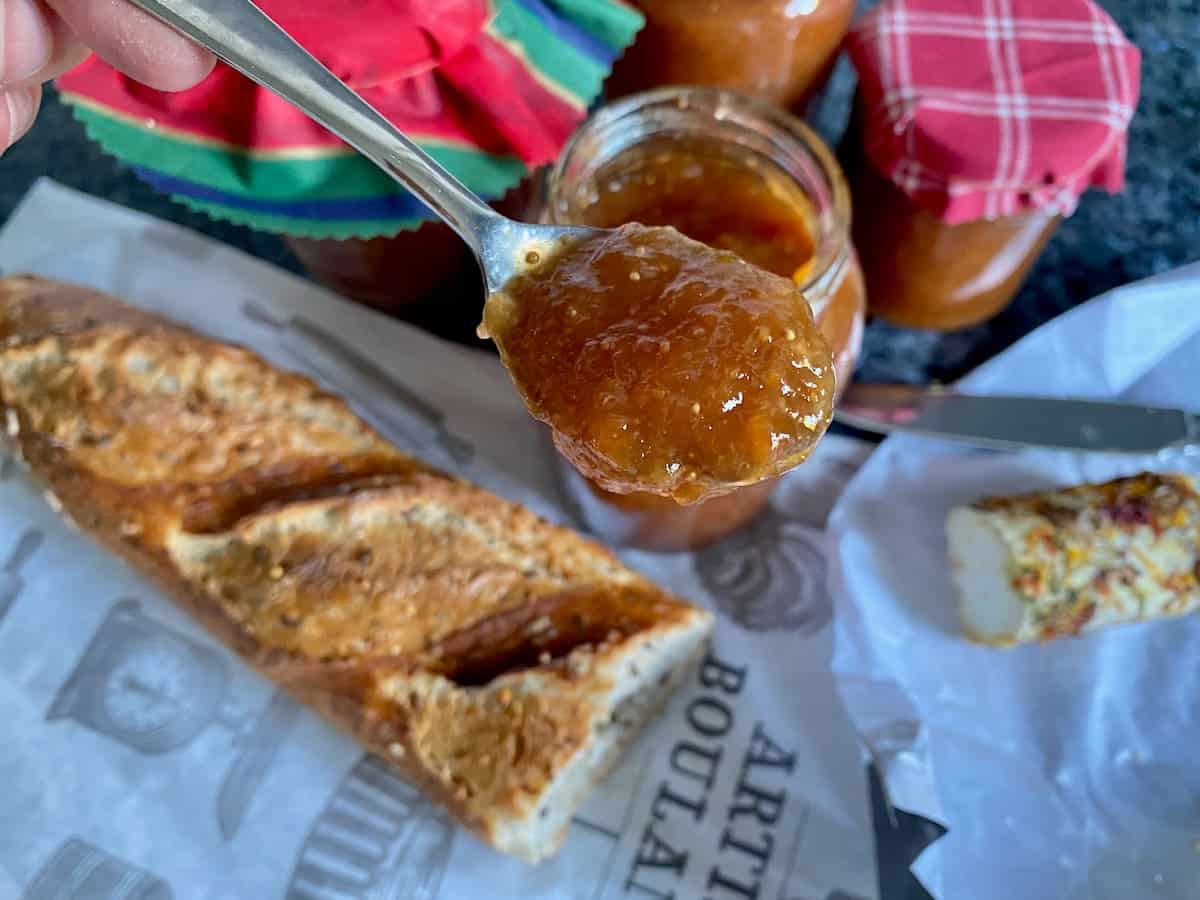 What Kind of Cheese Goes with Fig Jam?

Perhaps you know that my husband, Antoine, is Corsican (Colonna in Corsica is so popular, it’s like Smith in England). Cheeses from his “Island of Beauty” (l’île de beauté) are predominantly made from sheep’s milk or goat’s milk, with Brocciu the most popular (see my recipe for Fiadone for more).

On that note, many Corsican cheeses are, well, rather pungent. So the addition of fig jam is the perfect marriage on the cheeseboard since its sweetness helps put out the fire.

I say put out the cheese fire, since some Corsican cheeses can be so powerful that they keep the strongest ones under the chimney.

At first, I thought Antoine was joking but, like in ‘Asterix in Corsica’, his grandmother used to keep the robust ones under the chimney, letting their aromatic fumes drift off around the mountain village. She claimed that if she kept one in her fridge, she would have to throw it out: the fridge not the cheese!

What’s the Strongest Cheese in France? 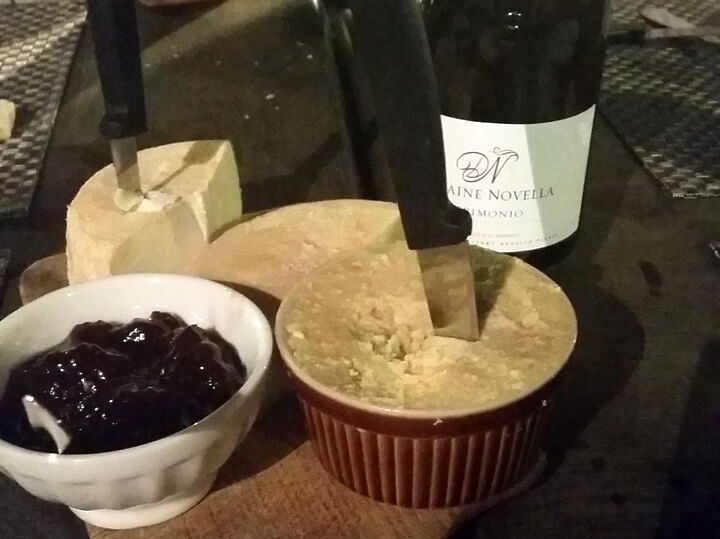 As a naïve newcomer to Antoine’s Corsican village, I was introduced to Casgiu Merzu by Antoine’s grinning uncle, or Tonton.

Rather than be Jill, I’ll be Frank: it’s the most dangerous cheese I know on this planet since it looks like an innocent little potted cheese with a knife or spoon. Imagine legendary Epoisses, Pont l’Eveque, which are already high on the strong cheese scale – but multiply Casgiu Merzu’s strength by about ten.

As a result, I’d say that Casgiu Merzu is not just the strongest cheese in France – but perhaps also the world. This also has to be the cheese that exploded the boat in Asterix in Corsica. I downed that whole bowl of fig jam to put out that fire!

As you can tell, I could talk longer on cheeses but this is about the jam.  With a surprise wind-fall of figs from my neighbour, Michèle’s tree, I’m deliberately updating my recipe this fig season, as my usual old-fashioned Corsican recipe has 2 issues:

1st recipe case in point: the old-fashioned recipe takes whole figs which are cooked in a syrup. It then takes up to 2 hours to cook the fruit. This is longer than I would cook other jams (spiced plum jam or apricot jam). The result was glossy and delicious – but we want less sugar and to consume less energy. Note the dark colour was due to using deep purple figs. The next recipe I’m using a cross variety between green and purple. 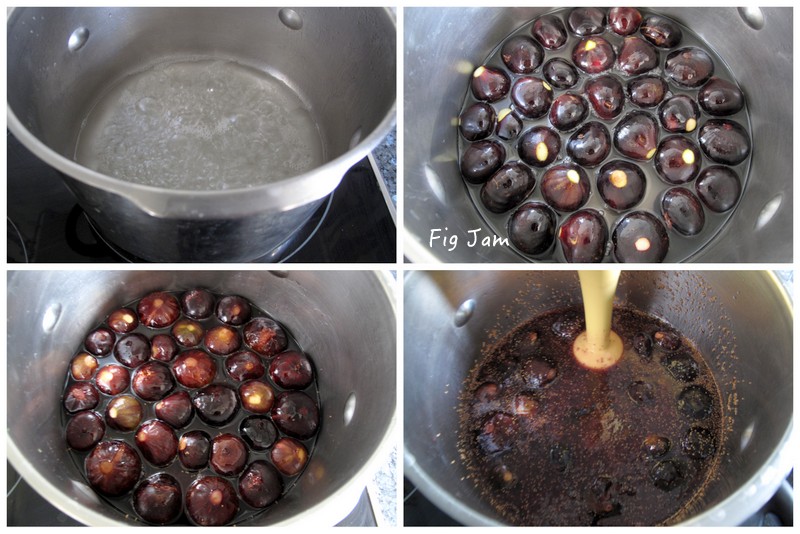 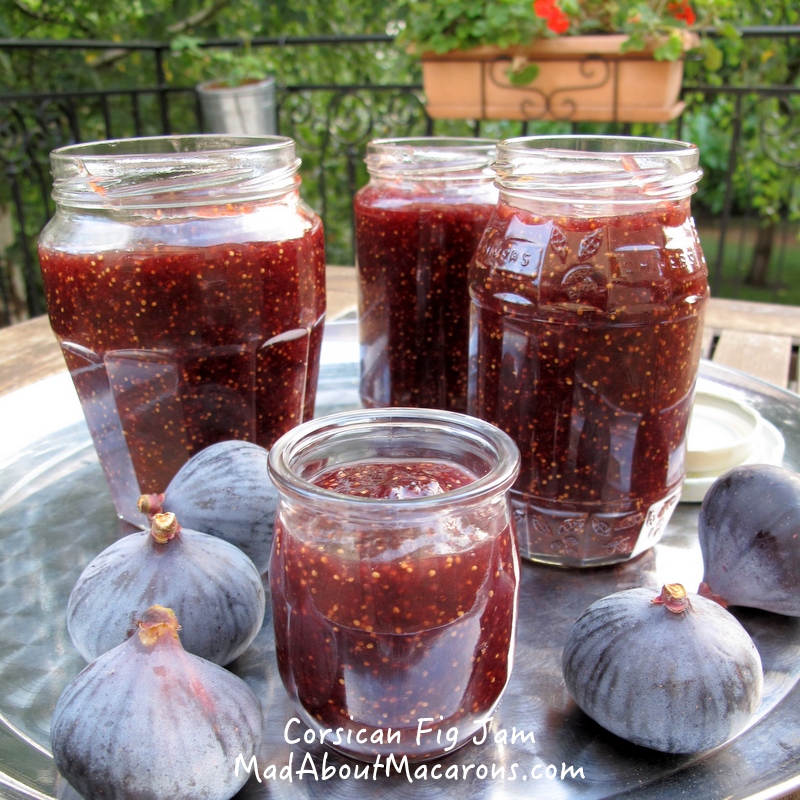 1st old-fashioned fig recipe, made with a syrup and cooked for 2 hours

What is the Fruit to Sugar Ratio for Jam?

By law, Jam or French confiture can only be considered and labelled as jam if it has 55% of sugar ratio to fruit. Already this is more than enough but I have seen recipes using a nearly whopping 1:1 ratio of sugar to fruit which frankly, is totally unnecessary. Too much unnecessary sugar is not only bad for us, but it also masks the flavour of the natural fruits.

As figs are naturally sweet, I wanted to reduce the sugar much more. Whether or not this can be officially called jam is another issue – but, as it’s homemade, who cares! It’s the taste that counts. With inspiration from Raphaël Haumont, our favourite French food scientist (presenting on ‘Allo Docteurs’, Magazine de la Santé), I reduced the sugar to 30%! Here’s how, by using his natural and healthy way of adding pectin. 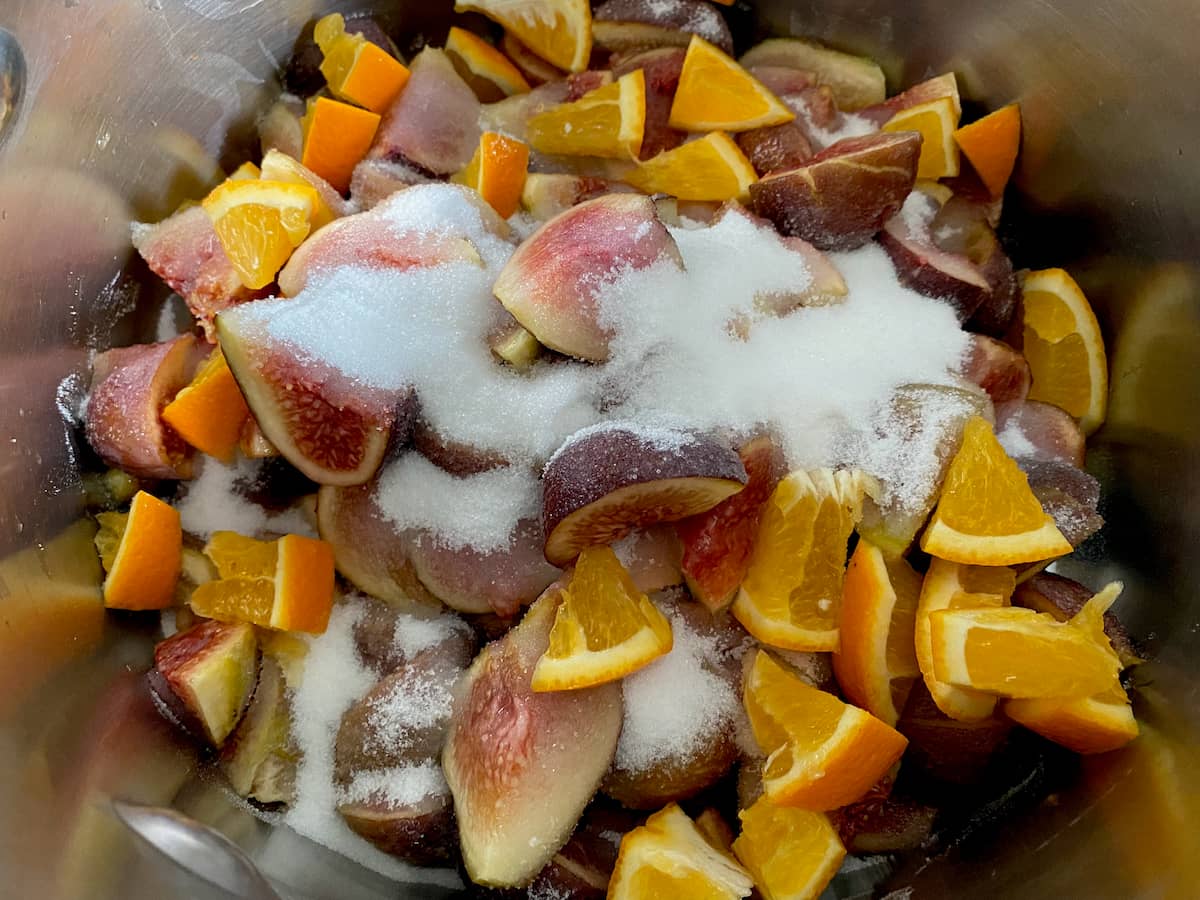 Go easy on the sugar – do you really need all of that, just because it’s jam?

Are Figs High in Pectin?

Figs are low in pectin and yet, strangely enough, it’s easy to make fig jam without pectin. It thickens on its own eventually due to the high amount of their natural fruit sugars. I discovered this with the previous old-fashioned recipe with 55% added sugar and no pectin whatsoever. It just worked.

If cutting back on the sugar, however, it’s better to add pectin. Best use fruits which are highest in pectin: orange (the highest pectin fruit), lemon or apples.

How do you Make Fig Jam Thicker?

If you find your fig jam is runny, I believe it’s because either you added too much water in making a syrup, it wasn’t macerated or cooked enough at a high enough temperature, or you reduced the sugar without adding pectin.

Before you look up the internet and follow instructions to make a mix of cornstarch – STOP! Here’s how:

Thanks to Raphaël Haumont for the tips from his videos and books, including ‘Un Chimiste en Cuisine’. 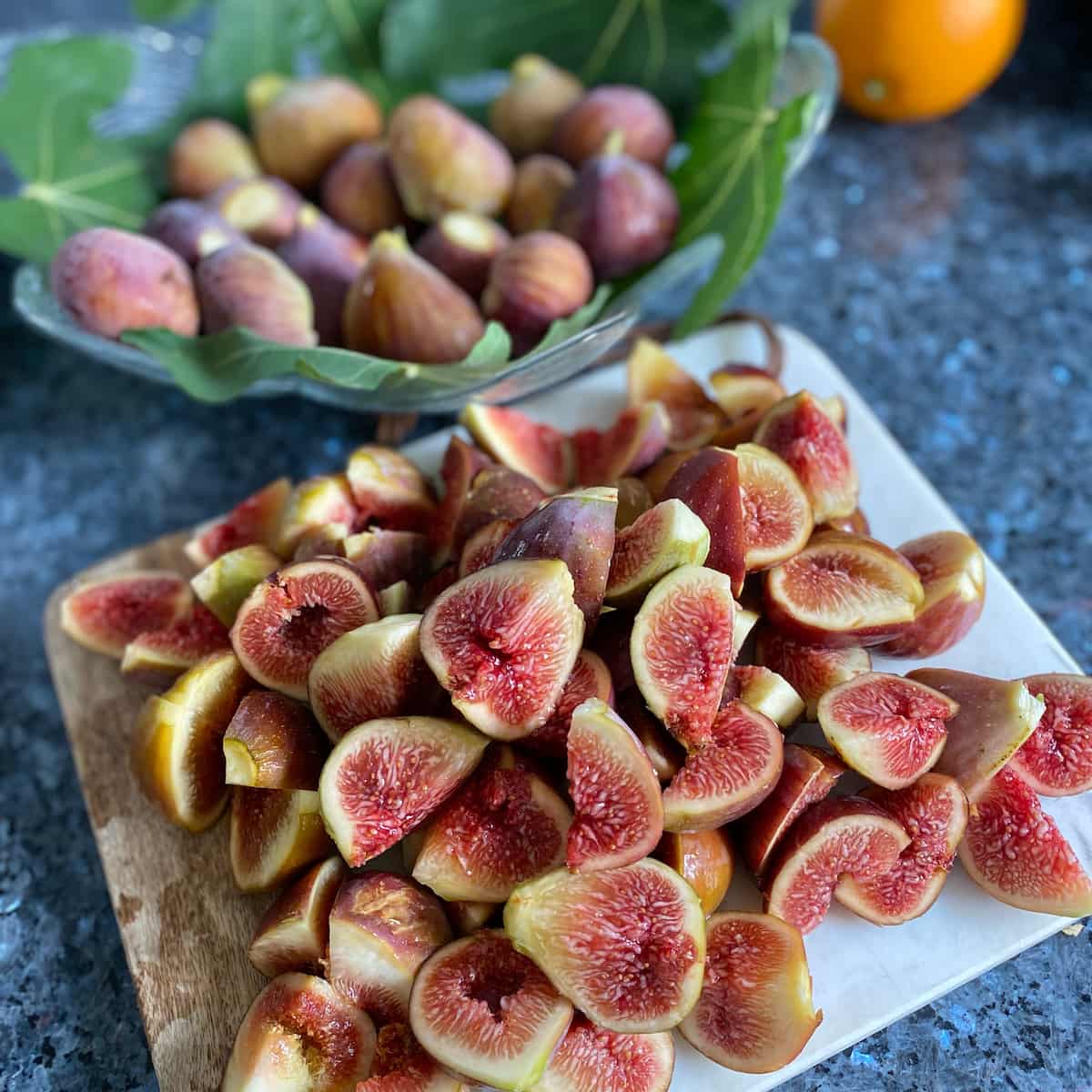 So, as a result of cutting down the sugar content, here’s how I made our latest batch of reduced sugar fig jam. Add just half an organic orange (an untreated orange is important, as pesticides can still linger even after boiling), including the pith and peel. This adds enough pectin to thicken the jam without the need for more sugar. I also completed by adding the whole juice of the orange. 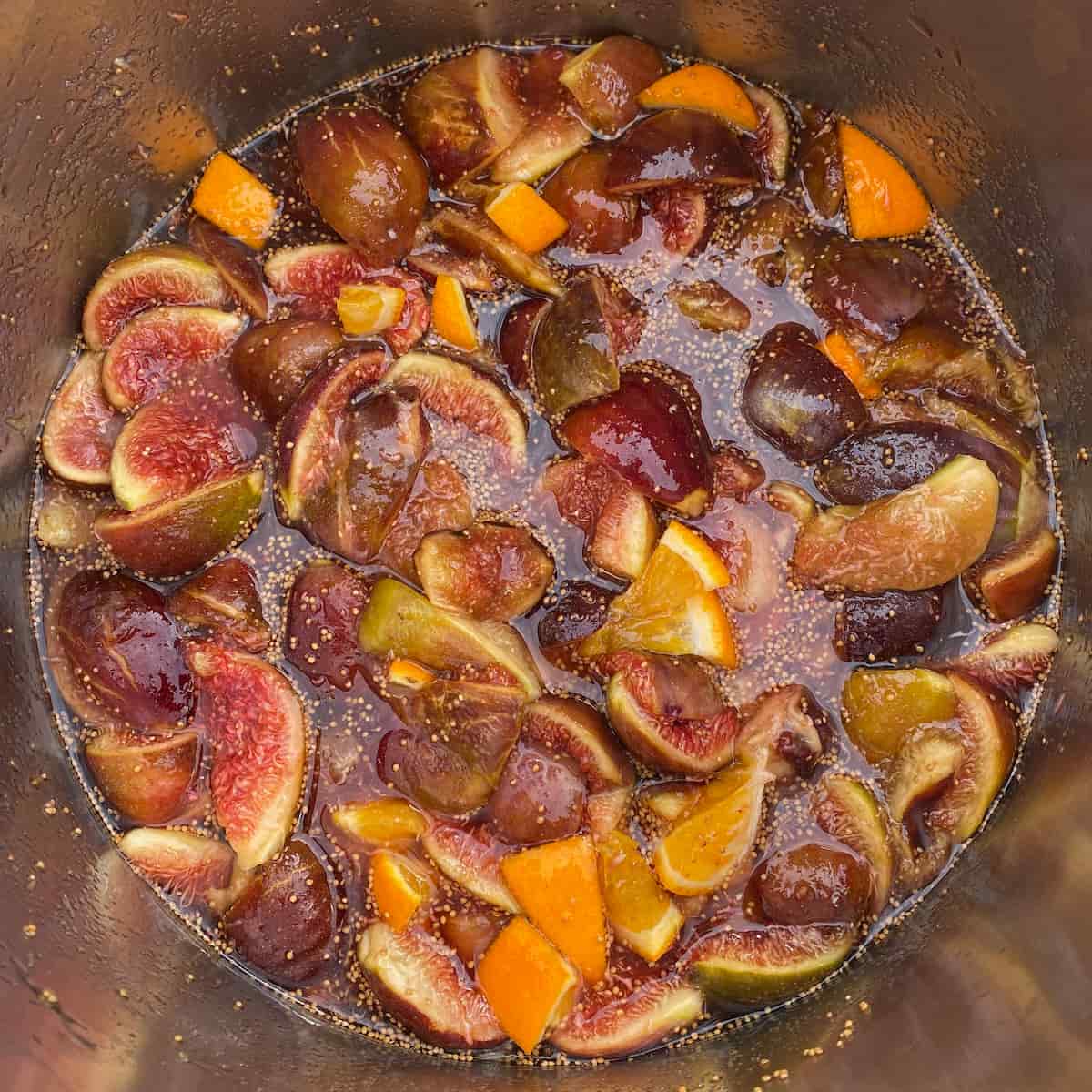 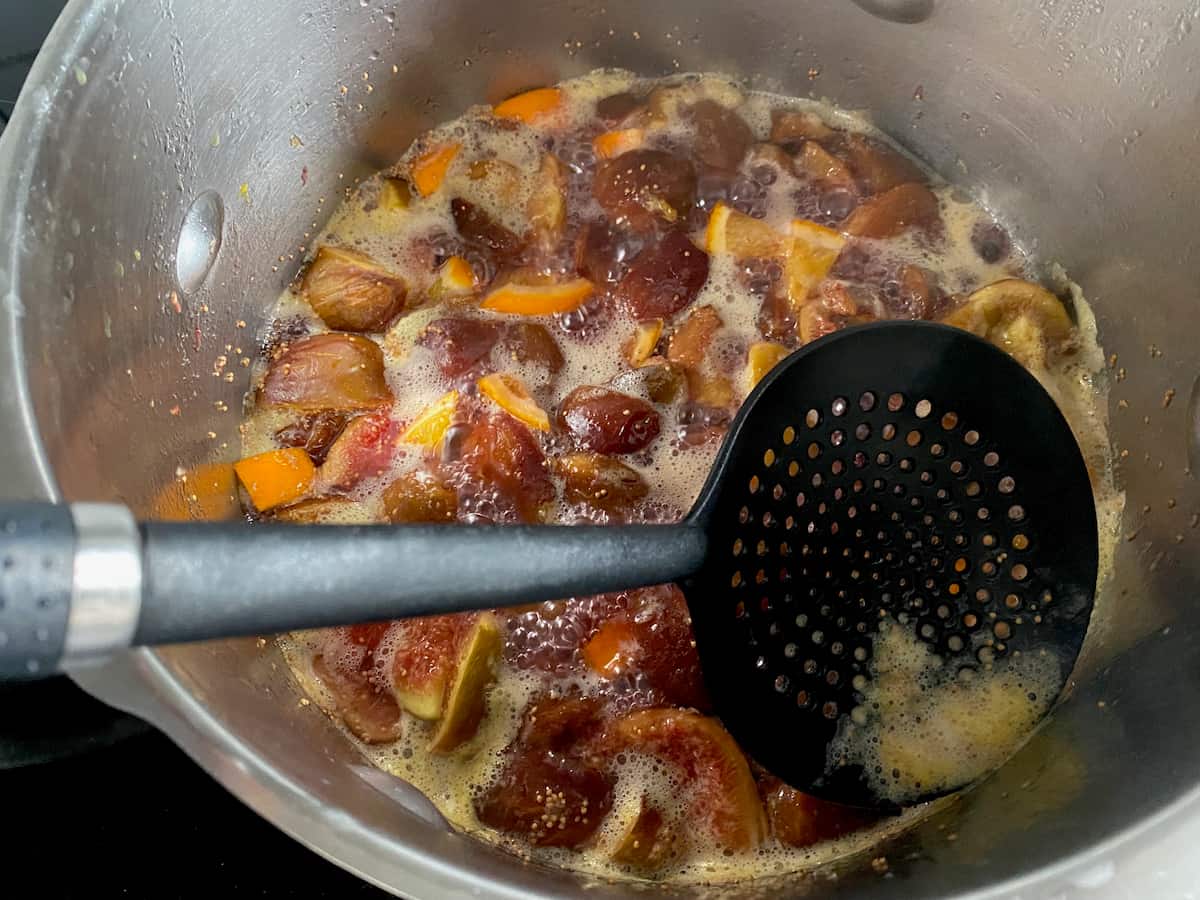 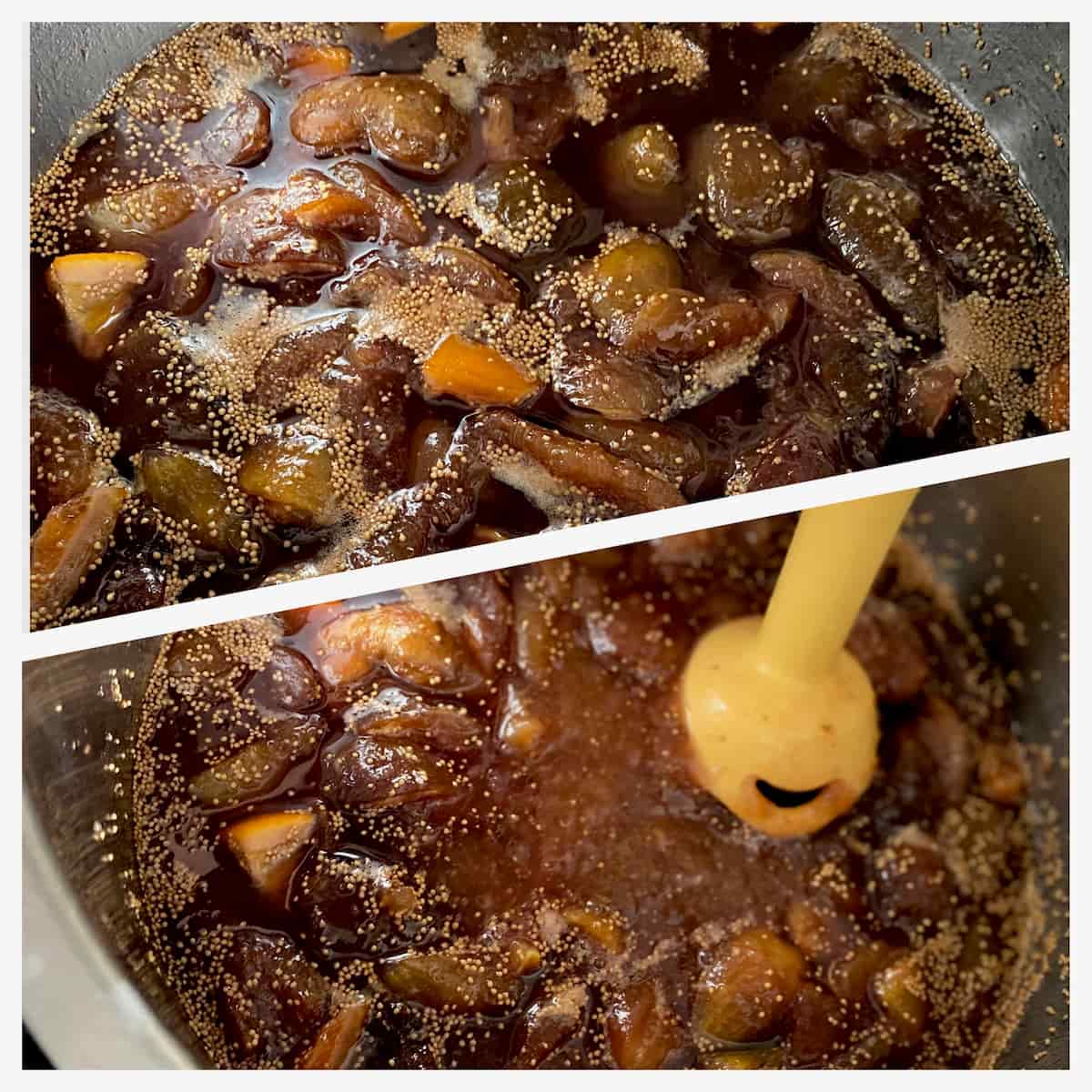 Homemade fig jam can be stored in a cool, dry place for up to 2 years – as long as the jars are sterilised and properly sealed.
See how below.

Once opened, keep the jam in the fridge for up to a month.

If jam contains more sugar, then it can keep for longer (2 months) but any reduced sugar jams are best consumed quickly.  Frankly, this isn’t a problem – it’s too good! 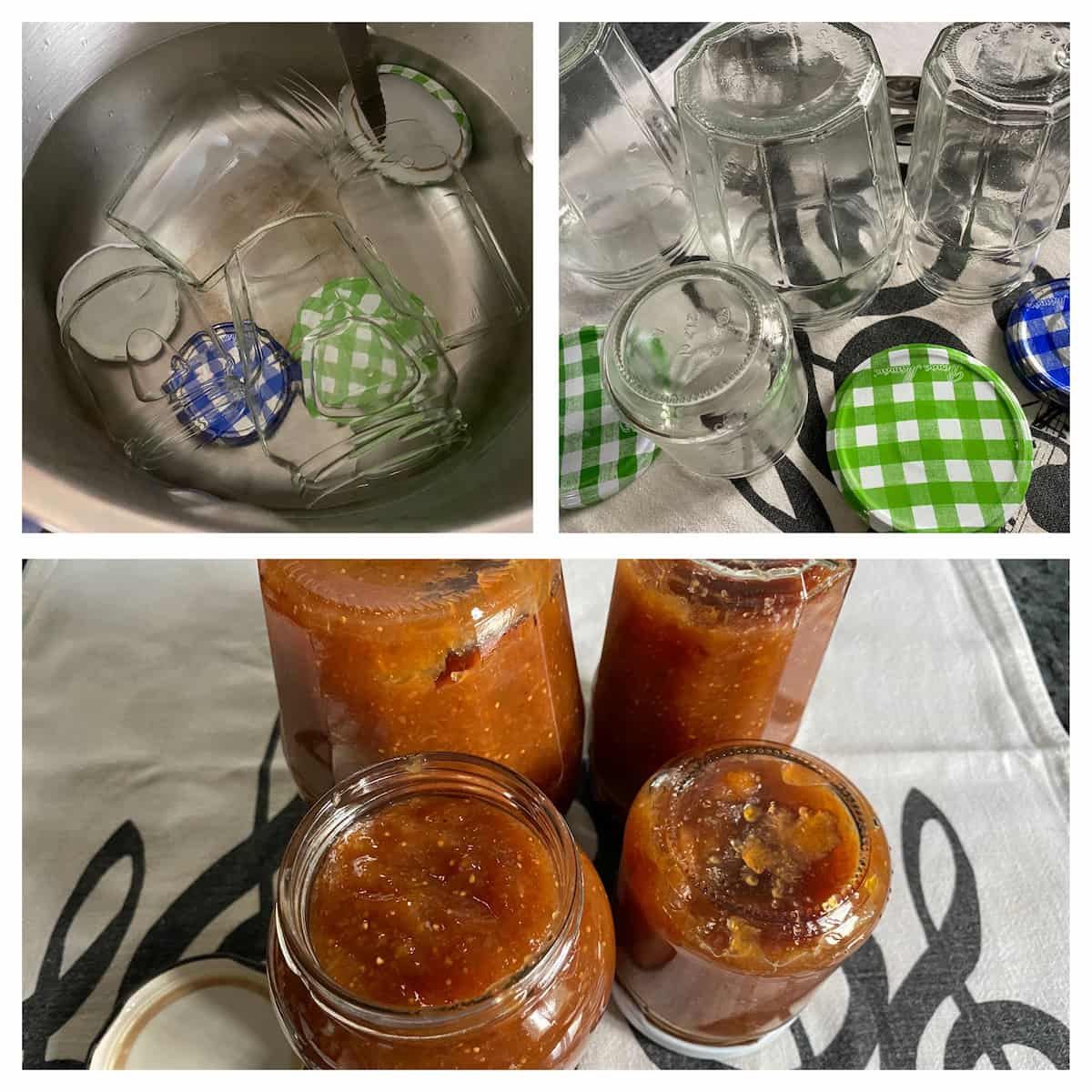 How to Sterilise and Seal Jam Jars

To sterilise the jam jars and lids, plung them in boiling water for 10 minutes. Remove carefully with tongs and dry on a clean towel.

When the jam is ready, carefully pour the boiling jam directly into the jars using a ladle. Fill the jars as much as possible to the top then immediately seal with the lid, screwing it tight shut then upturn.

Why do we upturn jam jars as soon as they’re filled? Upturning as soon as the lid or cover goes on ensures that the jam is properly sealed. At this point, plunge into cold water to complete the process. 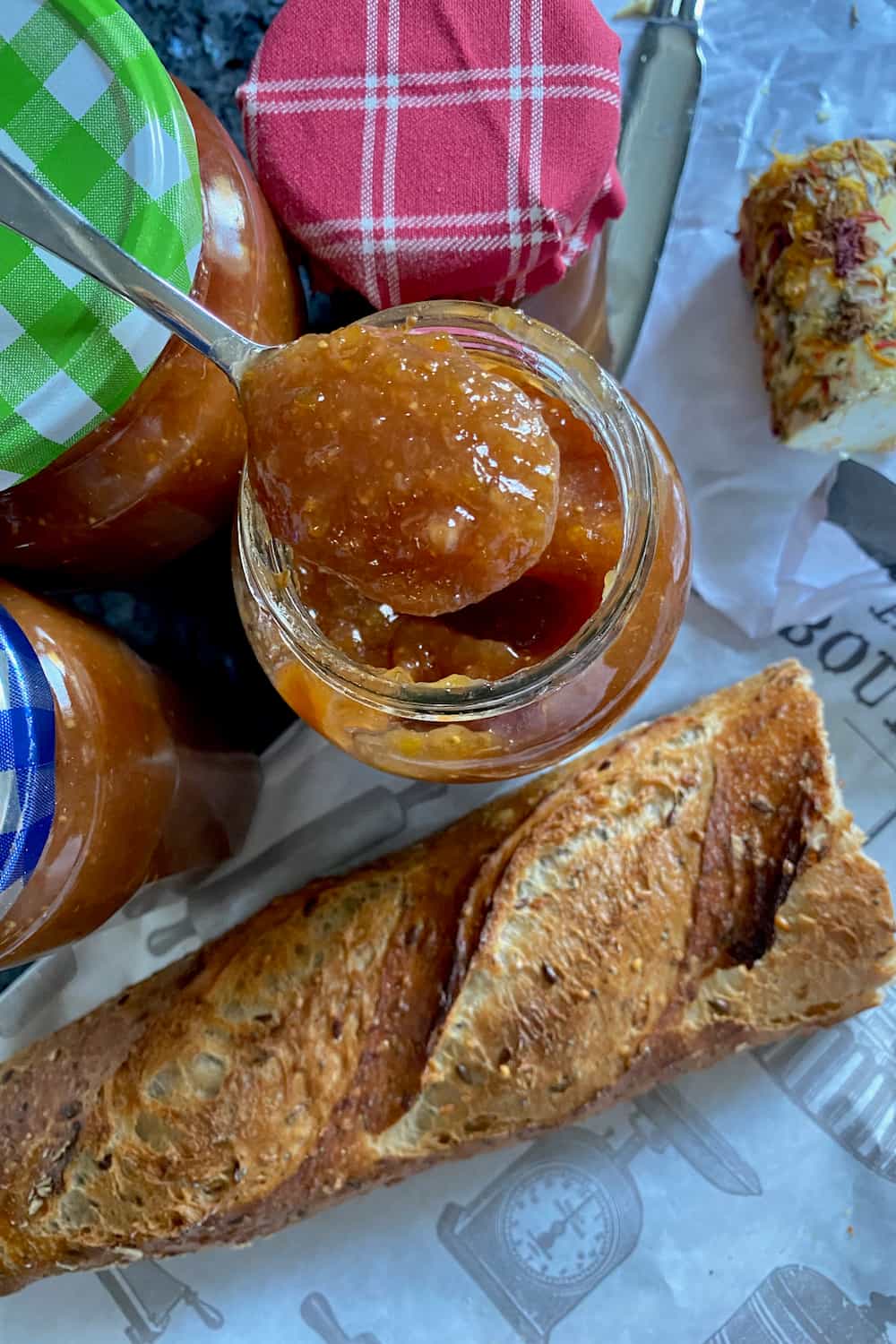 PIN me for fig season!

For a touch of exotic sweetness, add a vanilla pod/bean. Personally I don’t like adding this, as this will no longer be good with cheese! My friend, Christina at Christina’s Cucina adds orange with Grand Marnier®. Many fig jams in Corsica also add roughly chopped hazelnuts,  almonds or walnuts.

Adding spices goes so well with figs. Ginger, cinnamon, or cardamom are particularly good – especially over the festive period with a cheeseboard or with Foie Gras or other pâtés. Either add 1 tablespoon of chopped candied ginger, 2 cinnamon sticks or 12 green cardamoms from the start and discard cinnamon/cardamoms before pouring into jars.

Great spread on Scotch pancakes, brioche, baguette, and with pâté, foie gras or cheese (see above for details). In this photo, this is a slightly smoked goat’s cheese with dried flowers from our local fromagerie in Saint-Germain-en-Laye.
Also delicious used in or with the following recipes (sweet or savoury):

For many more ideas, see the market produce fig page. 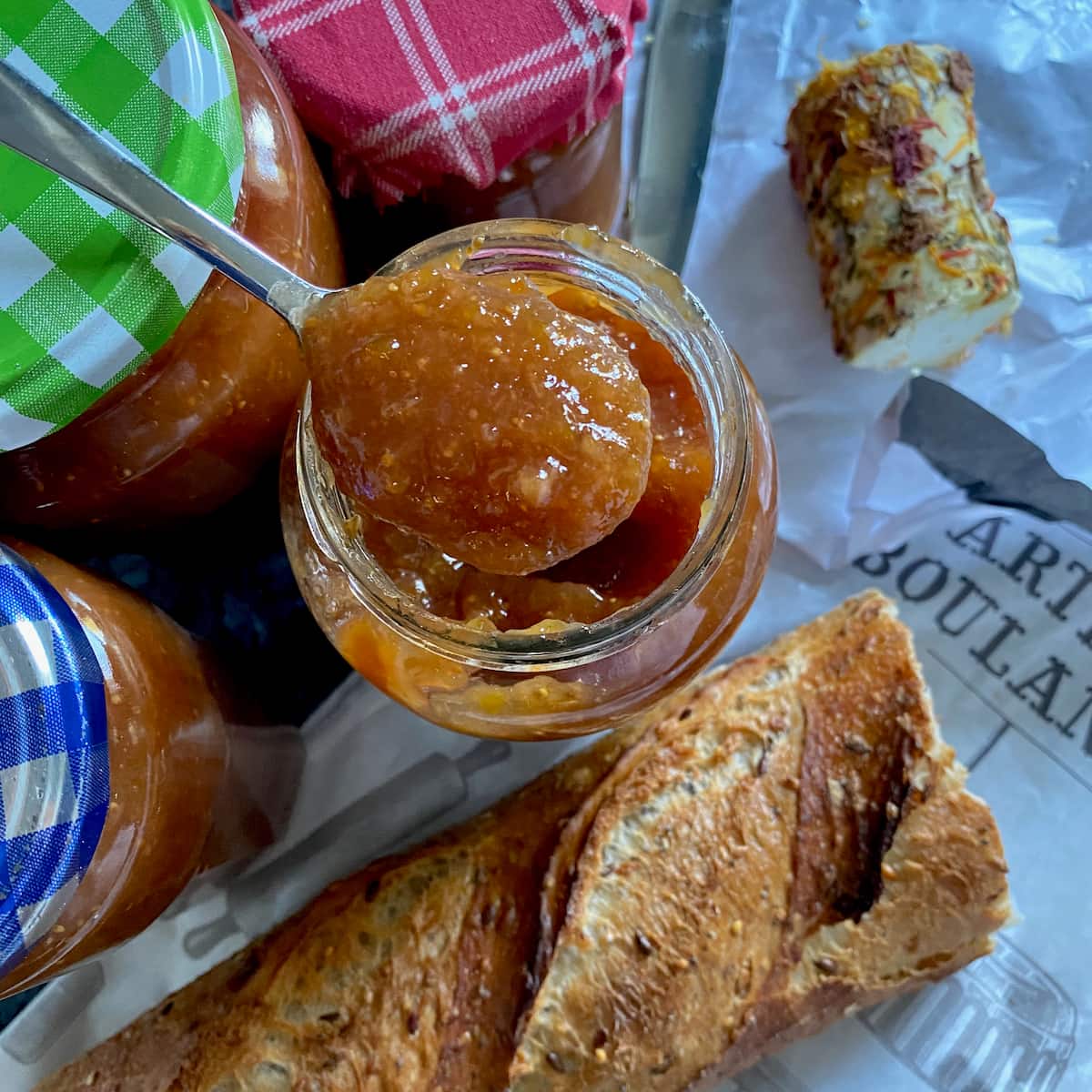 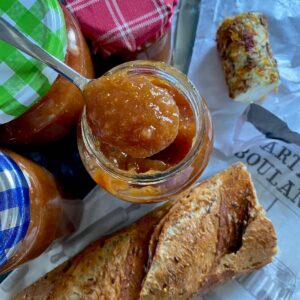 An intensely fruity fig jam with only a third of sugar, thanks to the natural science of orange, high in pectin. Great with bread, brioche, croissants - and even better with cheese and pâtés.

Variations: add a vanilla pod/bean or spices such as ginger, cinnamon or cardamom (see the fig page for flavour associations). Serve with bread (brioche, crêpes, crackers etc). Best with cheese (particularly with goat/sheep cheeses), Foie Gras and pâtés. Storage: store in a cool, dry place for up to 2 years. Once opened, keep refrigerated and consume within a month, due to its lower sugar content. N.B. There’s no need to use special jam-making sugar with pectin. Just regular sugar or granulated does the job well with figs and added orange, which is naturally high in pectin. 203 calories for 1/3 pot of jam.

This recipe was first published 16 September 2016 but is now completely updated to further reduce the jam’s sugar quantity.