Quick and easy Fiadone Cheesecake – the most popular Corsican dessert using Brocciu (goat’s or ricotta) cheese, eggs, sugar, lemon and a splash of liqueur.  Recipe continuously tested and approved by my Corsican husband for dessert or breakfast. 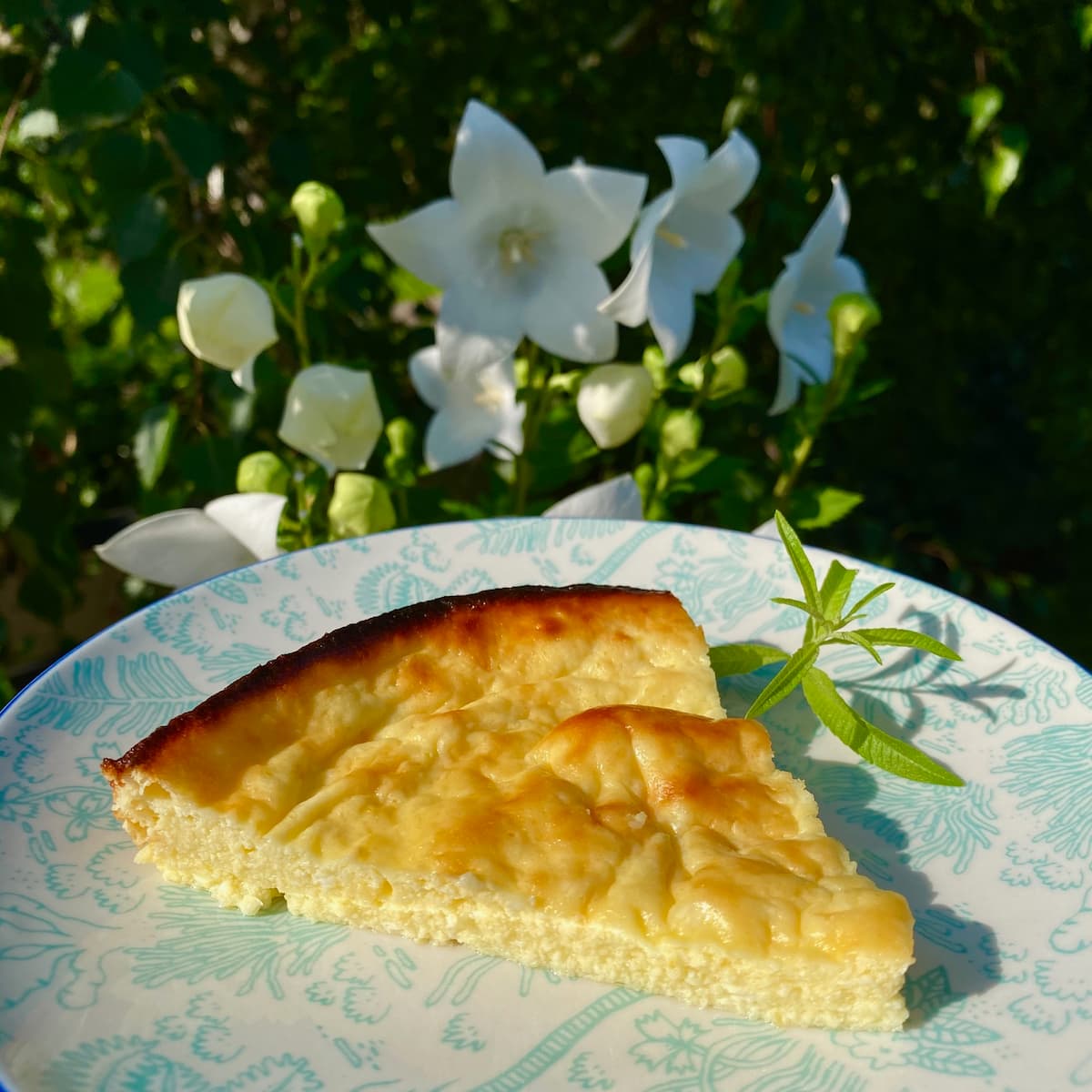 Fiadone: Most Popular of Corsican Desserts

As soon as the temperature drops in Autumn, fresh Brocciu cheese appears at our local market. So I love to celebrate its arrival by making a Fiadone Corsican Cheesecake.

Fiadone is found on just about every Corsican dessert menu and every family has their recipe, including my husband’s. It’s also popular in all Corsican bakeries.  It’s said to have originated in the central town of Corte, but each time I ask in the patisseries in town (it’s not far from Antoine’s family’s home up in the hills, hidden from Corte’s Citadel), I don’t get any clear answer.  So I’ll report back here one day when I get further in my gourmet research. 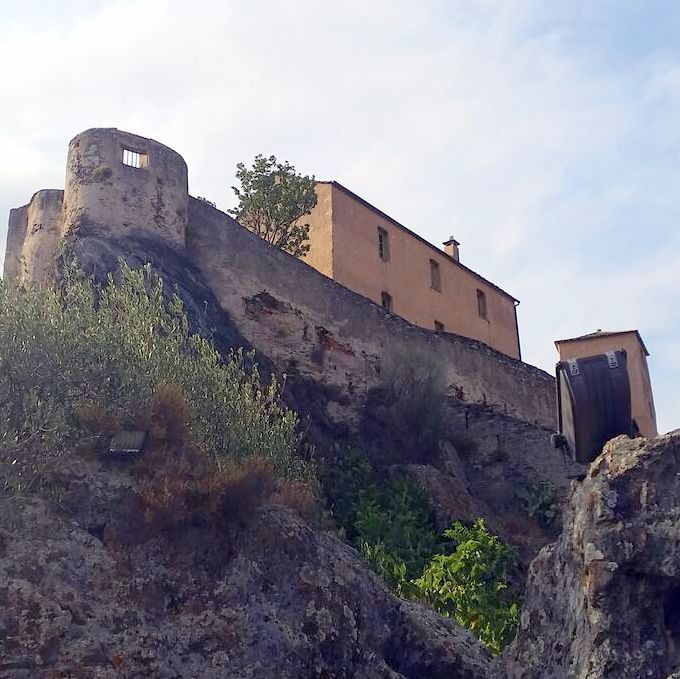 Pronounced Fee-a-don, the Fiadone is said to have come from the Italian Fiadoni flans. Corsican cuisine is largely inspired by Italian cuisine, thanks to its history and so its main ingredient is like ricotta rather than using a cream cheese. Although we call this a Corsican cheesecake, the Fiadone doesn’t have a biscuit base. Some pâtisseries – especially around Ajaccio – serve it in individual pastry cases with a tart base, called Imbrucciate.

Like its name suggests, the Fiadone resembles a flan with 4-5 simple ingredients: brocciu cheese, eggs, sugar, lemon zest and/or a touch of Eau de Vie liqueur. 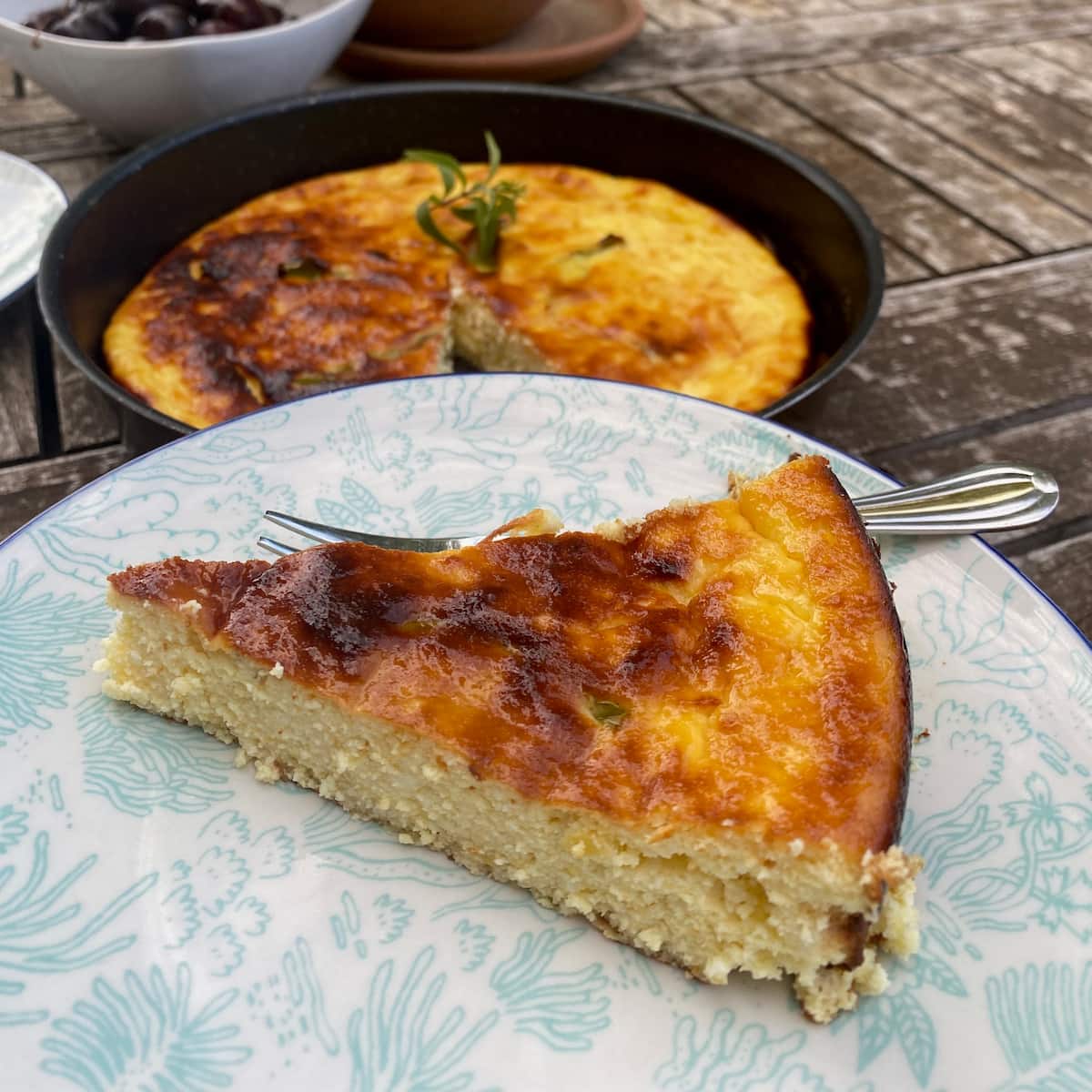 How is a Ricotta Cheesecake Different to a Regular Cheesecake?

Like an Italian-style ricotta cheesecake, the Fiadone is different to regular (New York) cheesecake in that it doesn’t use cream cheese.  What’s more, there’s no biscuit base like a regular cheesecake.  Instead it is served as it is, as a plain cake of ricotta (or rather, Corsican Brocciu) cheese, as it were!

That’s why I call it a lazy cheesecake.

Fiadone has a particularly rustic texture due to the main ingredient of brocciu cheese or ricotta. With the eggs, there’s a soft and squeeky bite to it. The cheese isn’t strong, so the taste is very light and the taste of lemon shines through in the aftertaste but shouldn’t be strong either. 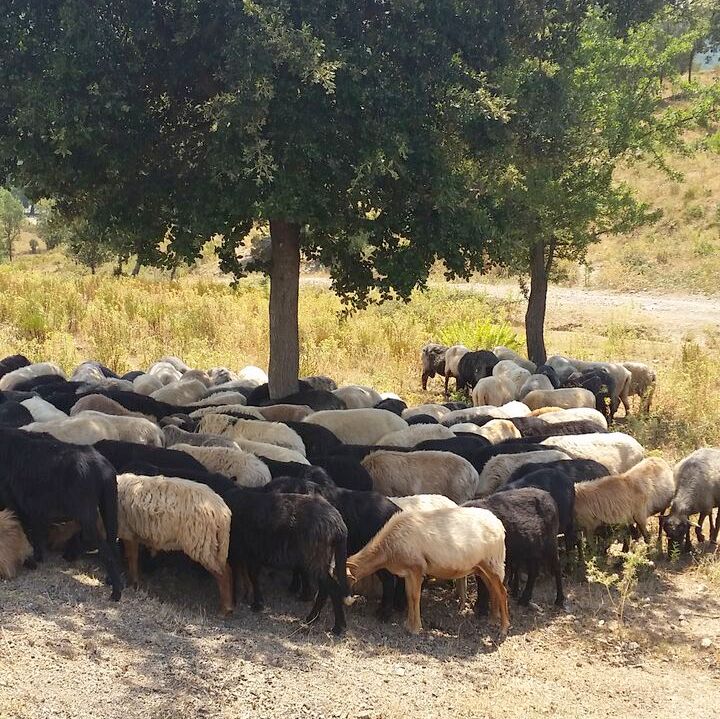 What is Brocciu Corsican Cheese?

Antoine’s Corsican family, like many on the Île de Beauté, serves this typical family dessert in the winter and spring months. Why? It’s due to the main ingredient, Brocciu.

According to the Corsican Agricultural and Rural Development agency, Brocciu is not to be confused with Brousse, since its AOC status has to contain at least 40% fat; if it has any less, it’s called Brousse.

If Brocciu is left to age slightly and has added salt, this is used for savoury dishes, such as in this Corsican Mint Omelette. 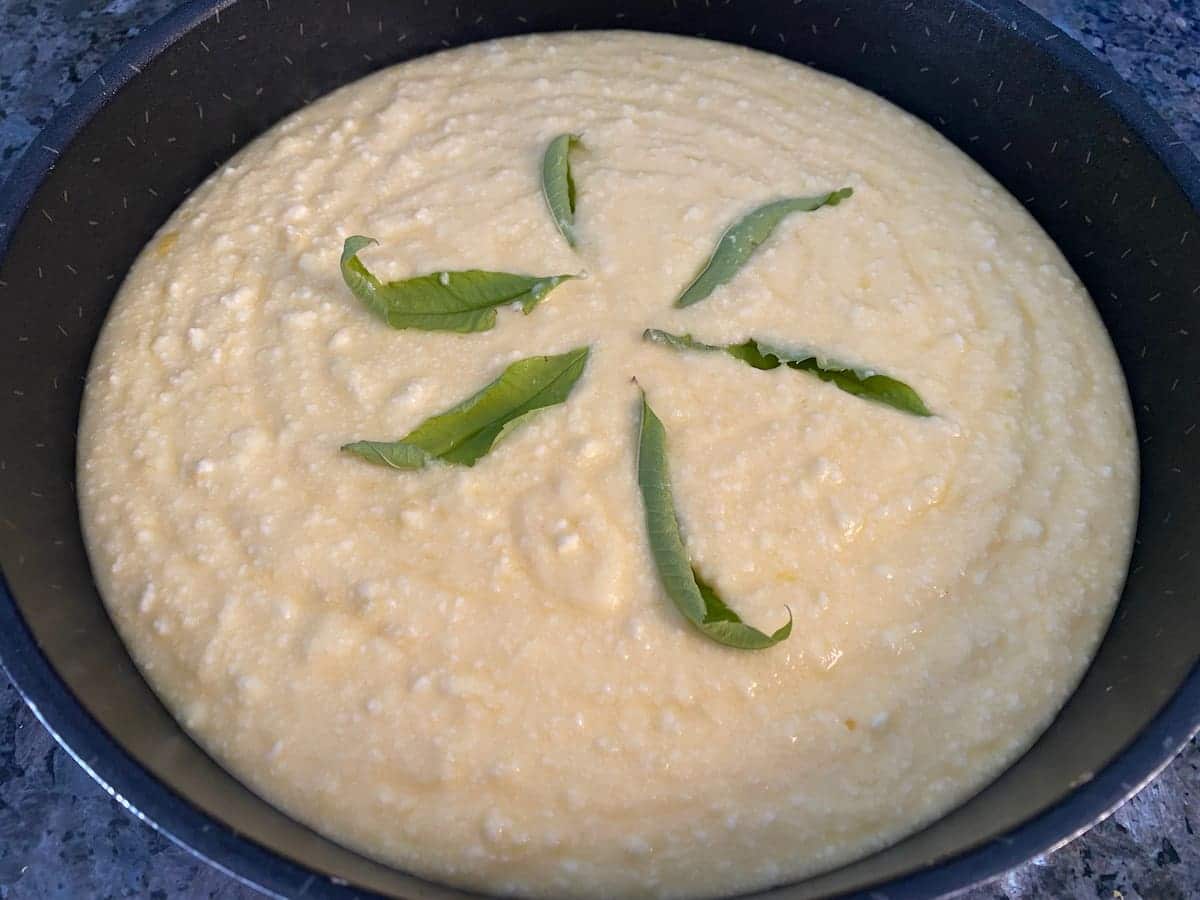 How to Serve Corsican Brocciu Cheese

As with all Corsican cheeses, Brocciu is made from goat or sheep’s milk – or both – but it’s a unique delicately fragranced curd cheese.

Produced only between November and May/June when milk is at its richest, it’s usually served very fresh on its own for dessert.

As a result, Brocciu is served fresh in the following ways as a typical family dessert: 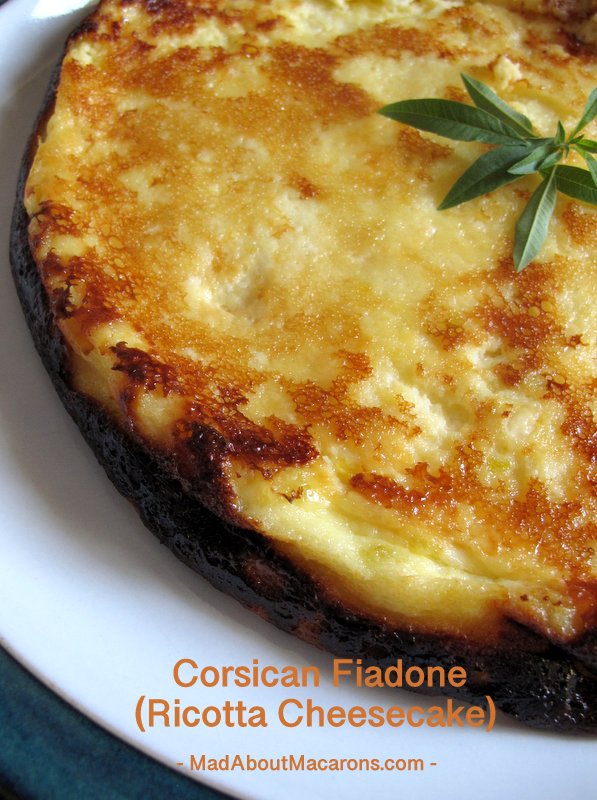 As it’s difficult to find fresh Brocciu cheese, here are some substitutes. 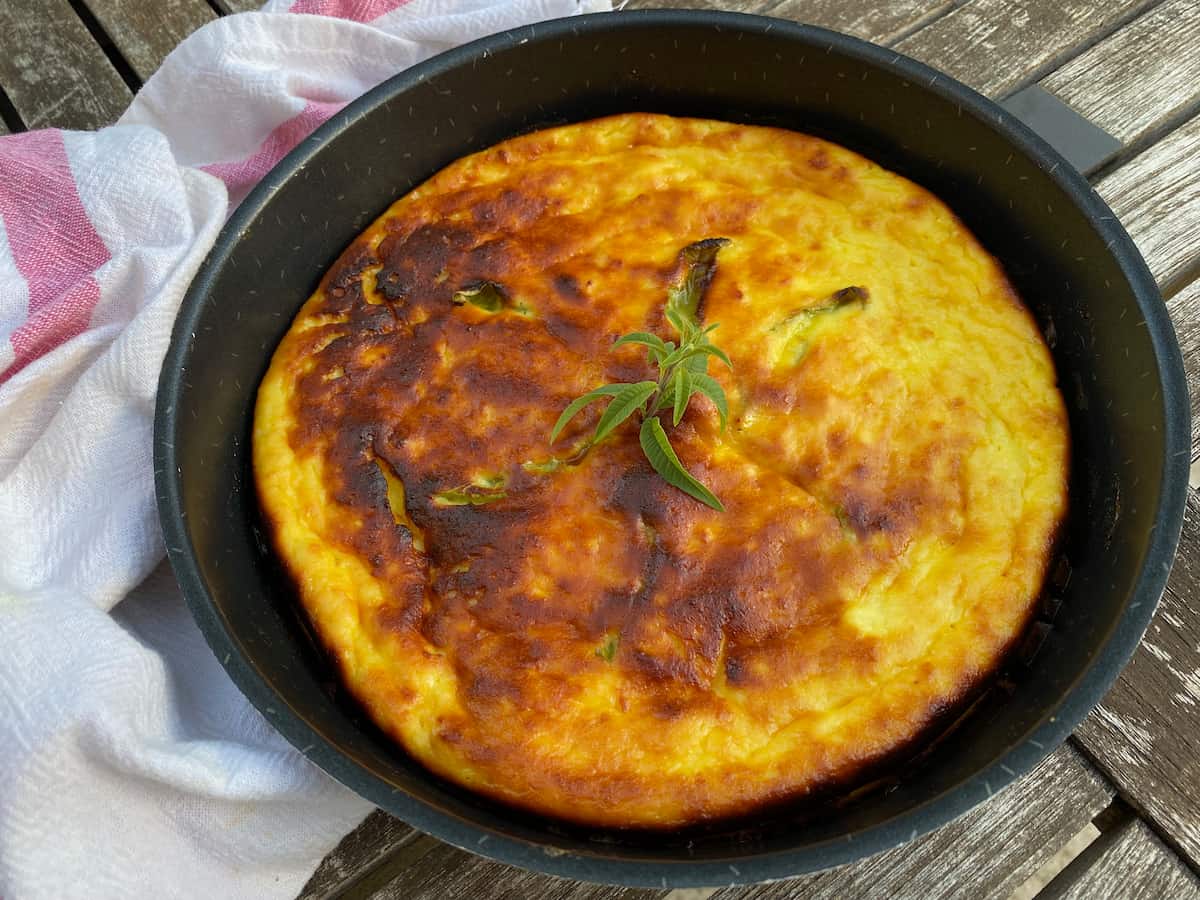 This has to be the most LAZIEST CHEESECAKE on the planet, it’s so easy.

This recipe is such a classic that I certainly can’t claim to owning a typical recipe. Basically it consists of soft ricotta-like cheese, eggs, sugar, lemon zest and a splash of liqueur.

So, my own twist is a reduction in sugar (as much as I dare without affecting the taste) and sometimes replacing the lemon with lime. It may sound like no big deal, but serve this using lime to my Corsican family and it’s like I’ve completely derailed. However, Antoine also likes it this way and so I’m sticking with it!

However, don’t even think of adding anything else but citrus to this, otherwise it won’t be a Fiadone. Liqueur used can vary but the Corsicans have a wonderful myrte or even a chestnut liqueur which goes well together. Otherwise use Limoncello or other citrus liqueur of your choice. 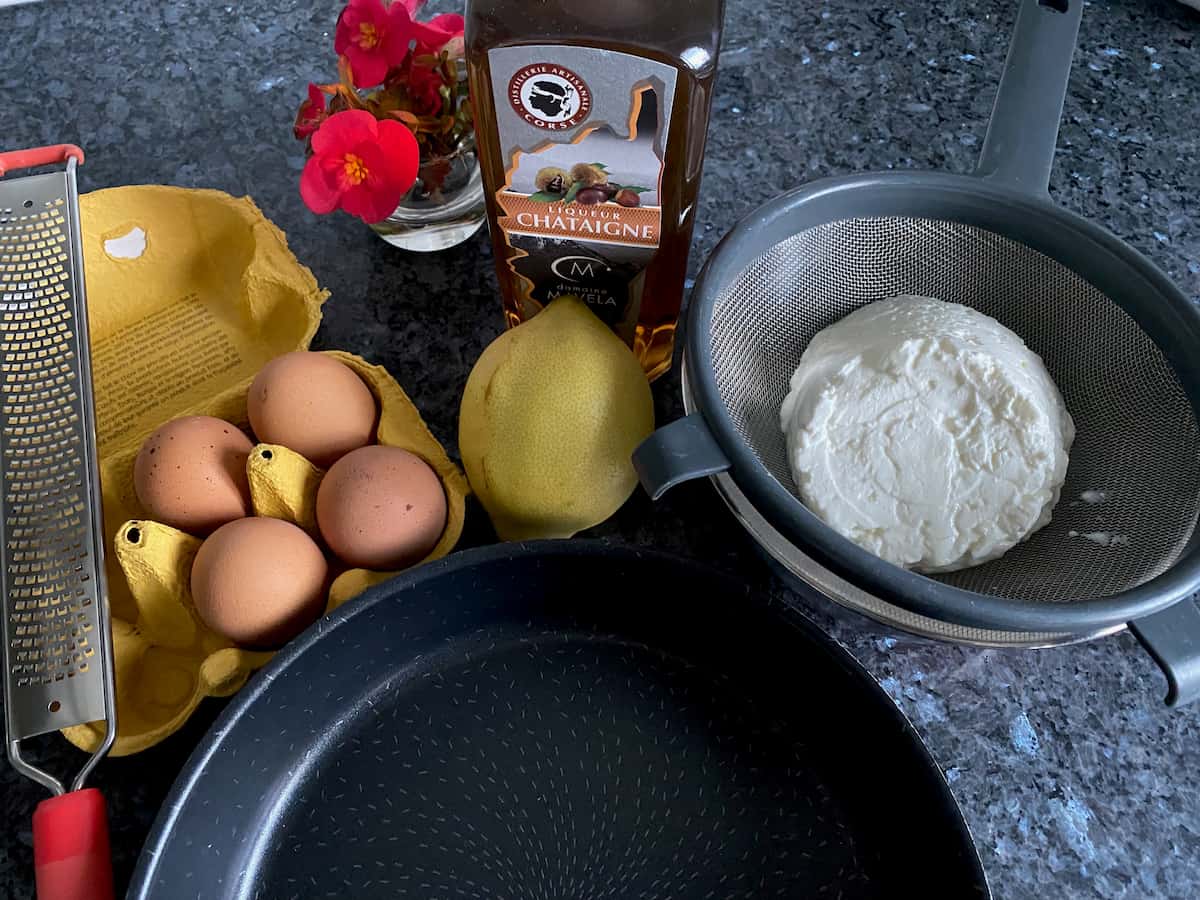 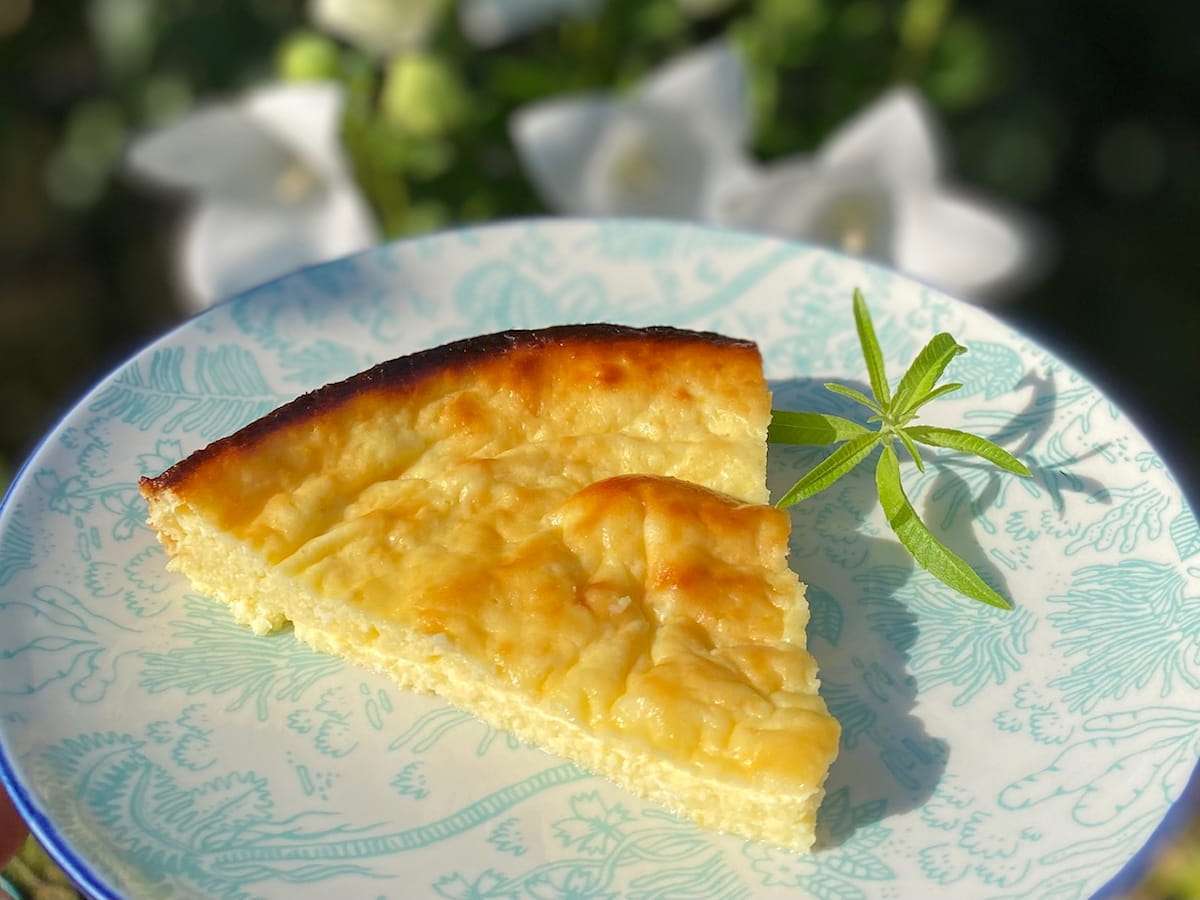 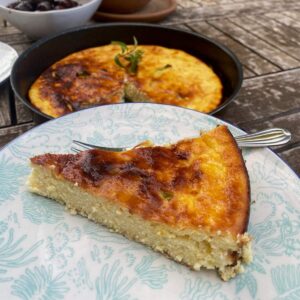 Serve chilled or at room temperature. Fiadone can apparently last for up to a week when chilled in the fridge but I have to admit we have never managed to wait that long, especially as it’s also delicious for breakfast!
NUTRITIONAL INFORMATION: 277 Calories per serving (11g protein) Measures: Please note that all my recipes are best made using digital kitchen scales in precise metric grams. Both ounces (and cups) are given as a guide.

I’d love to know how it turned out. Please let me know by leaving a review below (you can now rate it!).
It means so much to have your support.
On Instagram? Share a photo and tag @JillColonna and hashtag it #madaboutmacarons. À bientôt!

Find the best suited dessert for your menu – from everyday recipes to more elegant for the dinner table. Try these poached pears in coffee – they are healthy too!