Recipe for the French galette des rois served at Epiphany in France, with a pistachio and chocolate twist to the classic frangipane. Extract and adapted basic recipe from my second book, Teatime in Paris! Don’t forget to hide the trinket inside and have a crown or two ready for the winning King and Queen. 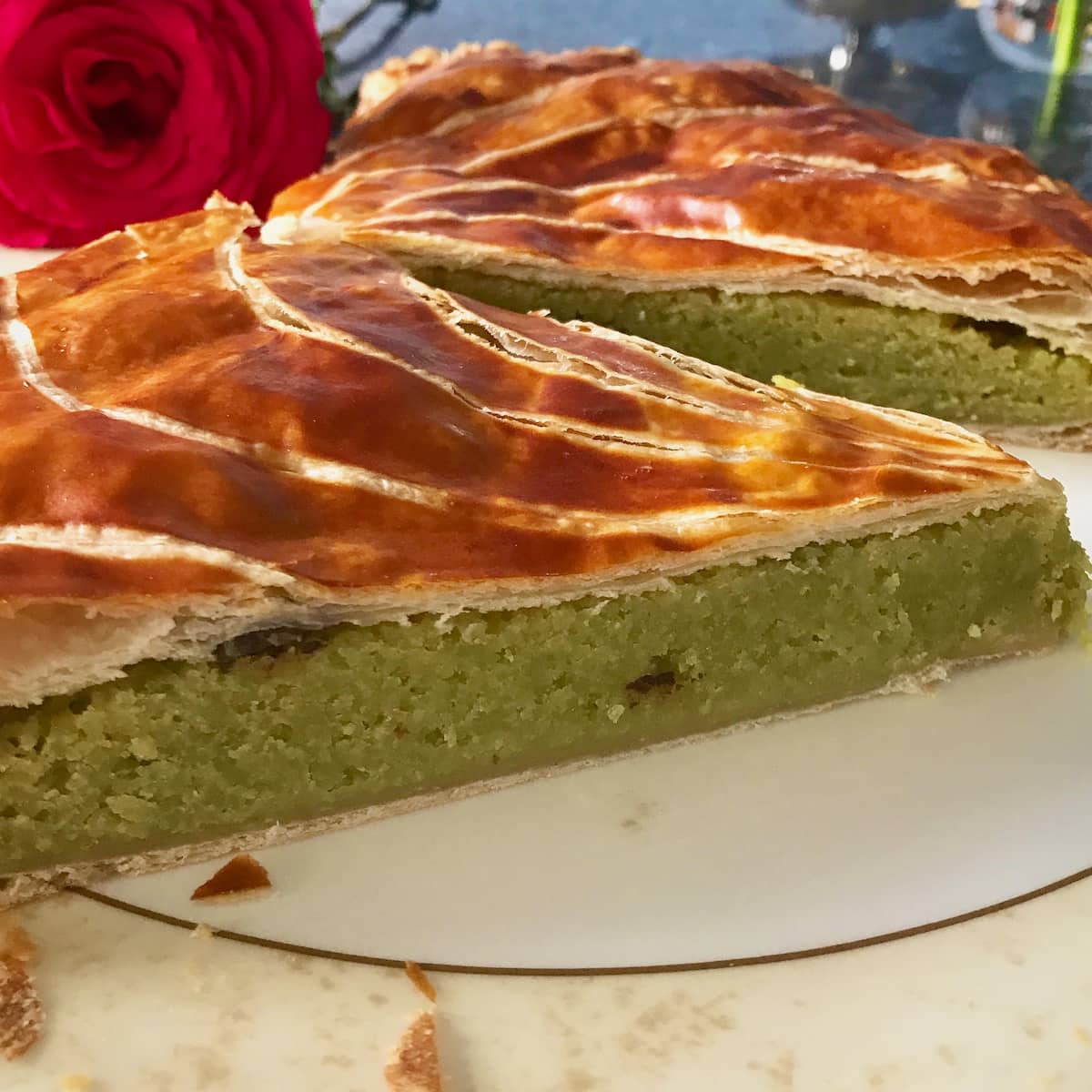 What is Special about A Galette des Rois?

What I love about living in Paris is that the party continues after the festive season, food-wise. Just when the decorations officially come down, there’s something special to look forward to. Officially as of Epiphany on 6th January, suddenly the Pâtisserie windows are filled with Galettes des rois – which in English, is simply King Cake. Although these days we see them around Christmas and up until the end of January when we are rather saturated with them.

I love trying the top ones for inspiration around Paris – see most of the best  galettes des Rois in Paris.

However, I also love to make my own.  Not only is it cheaper but it means we can generously fill it. Personally, I’m not keen on galettes that are mainly pastry with very little frangipane; I love them well garnished!

What’s more, it means we get to pick our own trinkets (French ‘fèves‘). This is just Lucie’s own collection of trinkets which represents rather a lot of successful galettes where she was Queen for a day!

Being a lazy gourmet, I use store-bought puff pastry (always choose pur beurre, the full butter version, which is better quality than plain puff.) Even better, ask/reserve good quality puff pastry from your local baker; in France we can ask politely for some, as normally you’re supposed to be buying the galettes! 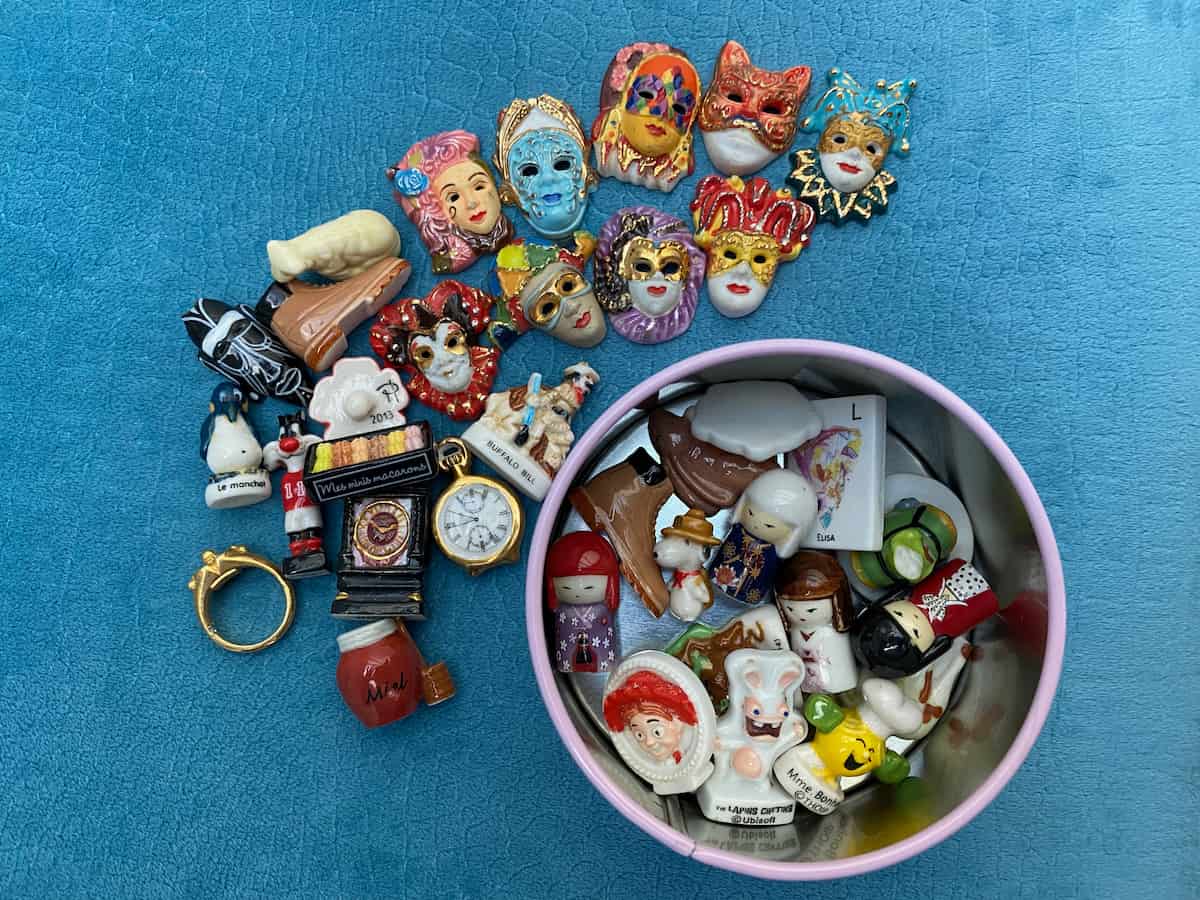 Lucie’s collection of trinkets she won in years’ worth of galettes des rois – was it rigged, I wonder?

The Galette des Rois (or King’s Cake in English) is traditionally served at Epiphany and is said to have taken its name from the three wise men.

It’s not a cake as such but more of a giant puff pastry sandwich filled with frangipane (almond cream added to pastry cream) with a trinket hidden inside to crown a King or Queen, whoever gets it in their slice.

In this recipe, the classic frangipane is replaced by an almond and pistachio cream topped with some dark chocolate. 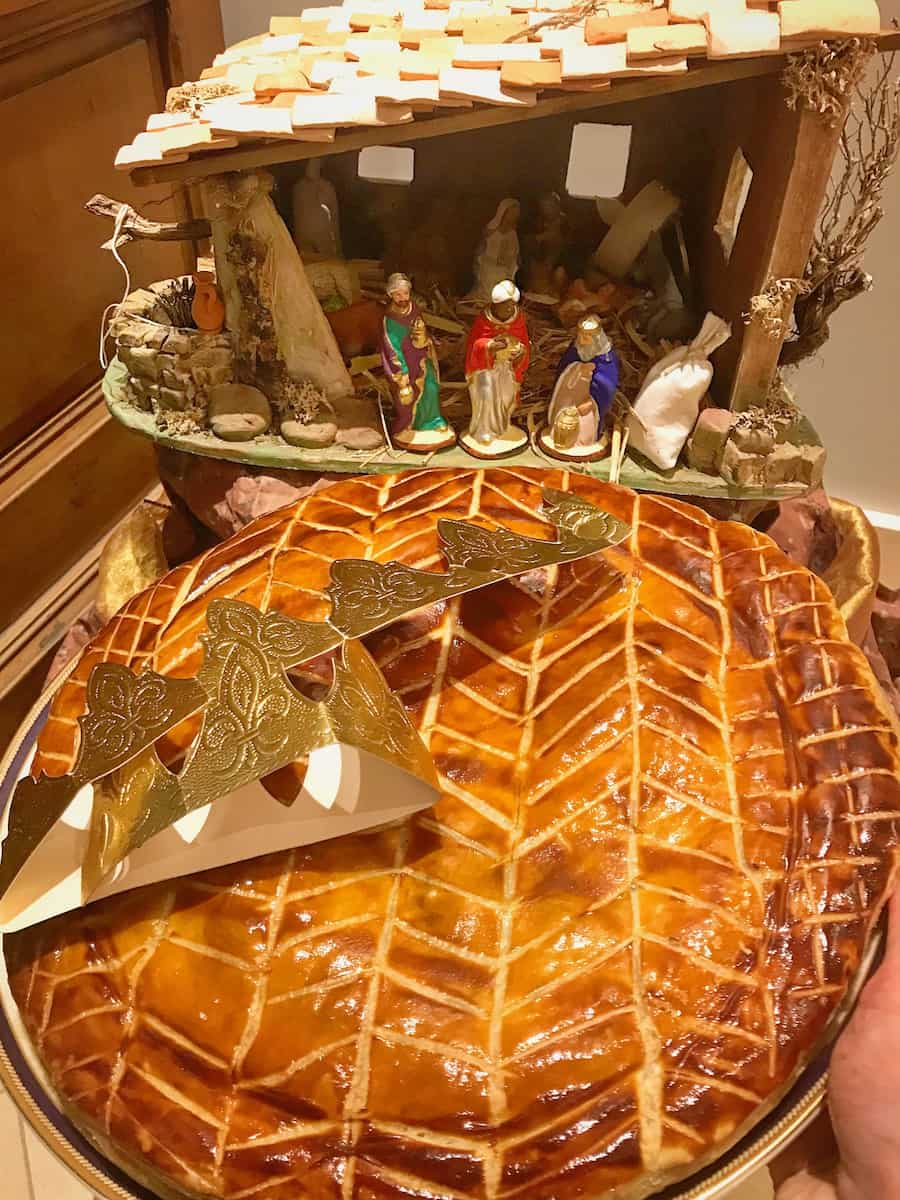 The traditional French Galette des Rois normally tastes of almond, as it’s usually made just with almonds for a frangipane filling. This pistachio version is just has an extra pistachio flavour to it with added chocolate. Together with the puff pastry as a crispy exterior, it’s quite filling but ever so satisfying.

Normally we serve this at goûter time (teatime) or dessert with French cidre from Normandy or Brittany (either Brut/dry or Doux/sweet) and with sparkling apple juice for the children.

Experiment with more flavours. This one is almond, pistachio and chocolate. However, based on the same recipe, make it with cherries instead of chocolate, hazelnuts and chocolate, pear etc.

All our family variations are in my book, Teatime in Paris.

What is the Ritual When Eating La Galette des Rois?

La Galette des Rois is usually enjoyed as one big King Cake and contains a fève or trinket. So that there is no cheating as to who gets the trinket when cutting the galette, there is a particular ritual.

Tradition in France is that the youngest person in the room sits under the table. They shout out, one by one, each person’s name in the room as the galette is cut by an ‘older and wiser’ person above. The person who gets the slice with the trinket nestling inside their part wears the crown and is then King (or Queen) for the day.

Sometimes in the chic pâtisseries, you’re given two crowns. That way a King can choose a Queen to accompany him/her and vice versa. 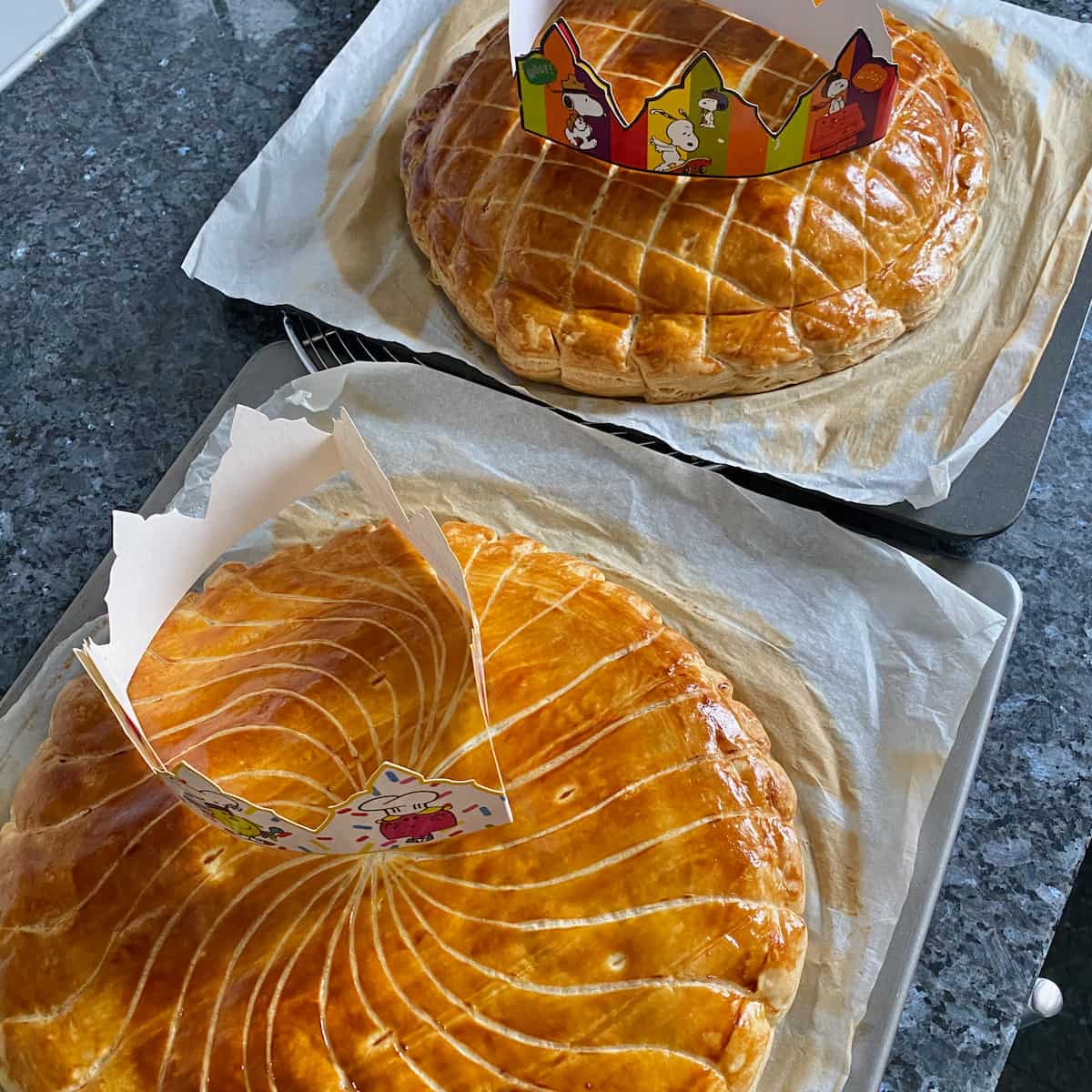 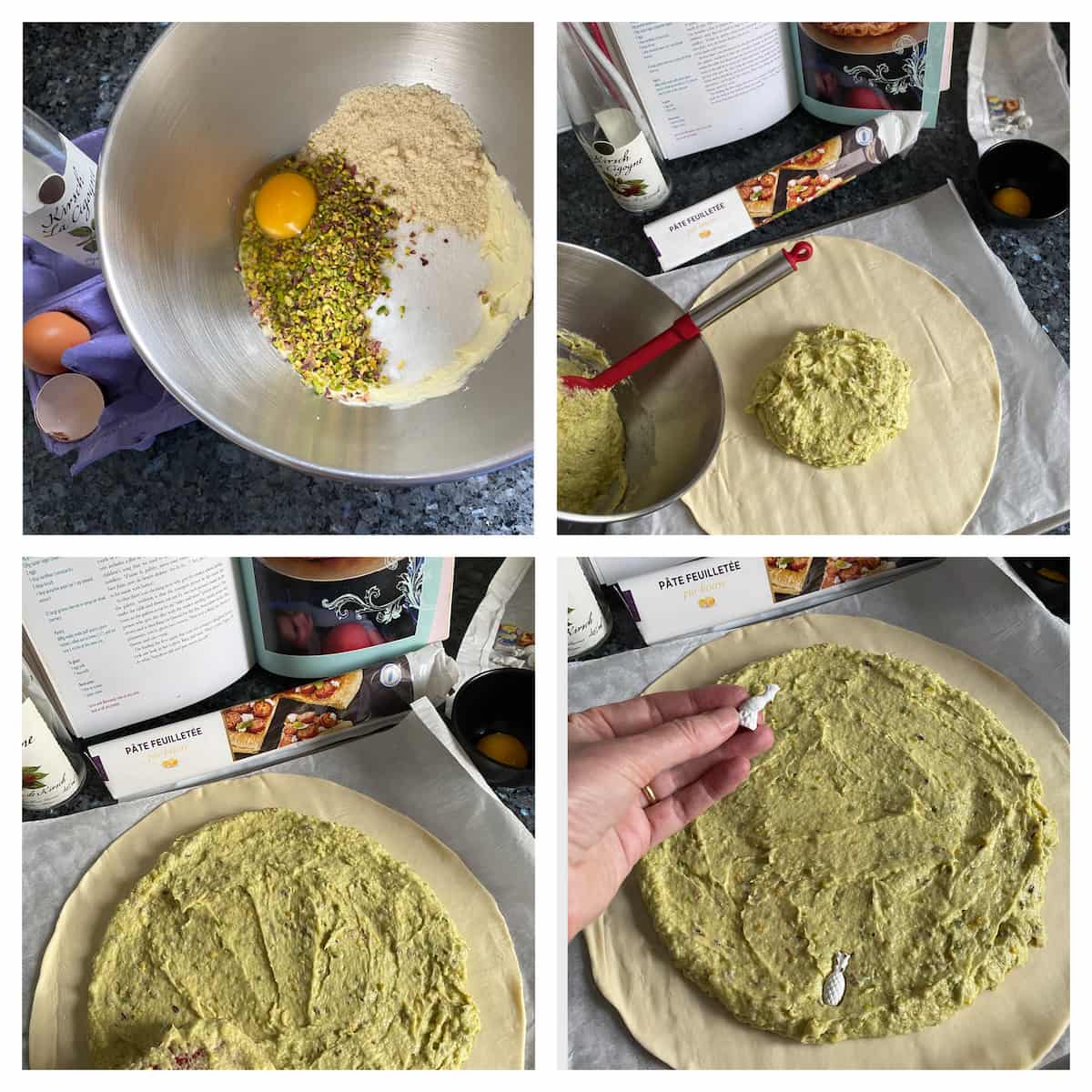 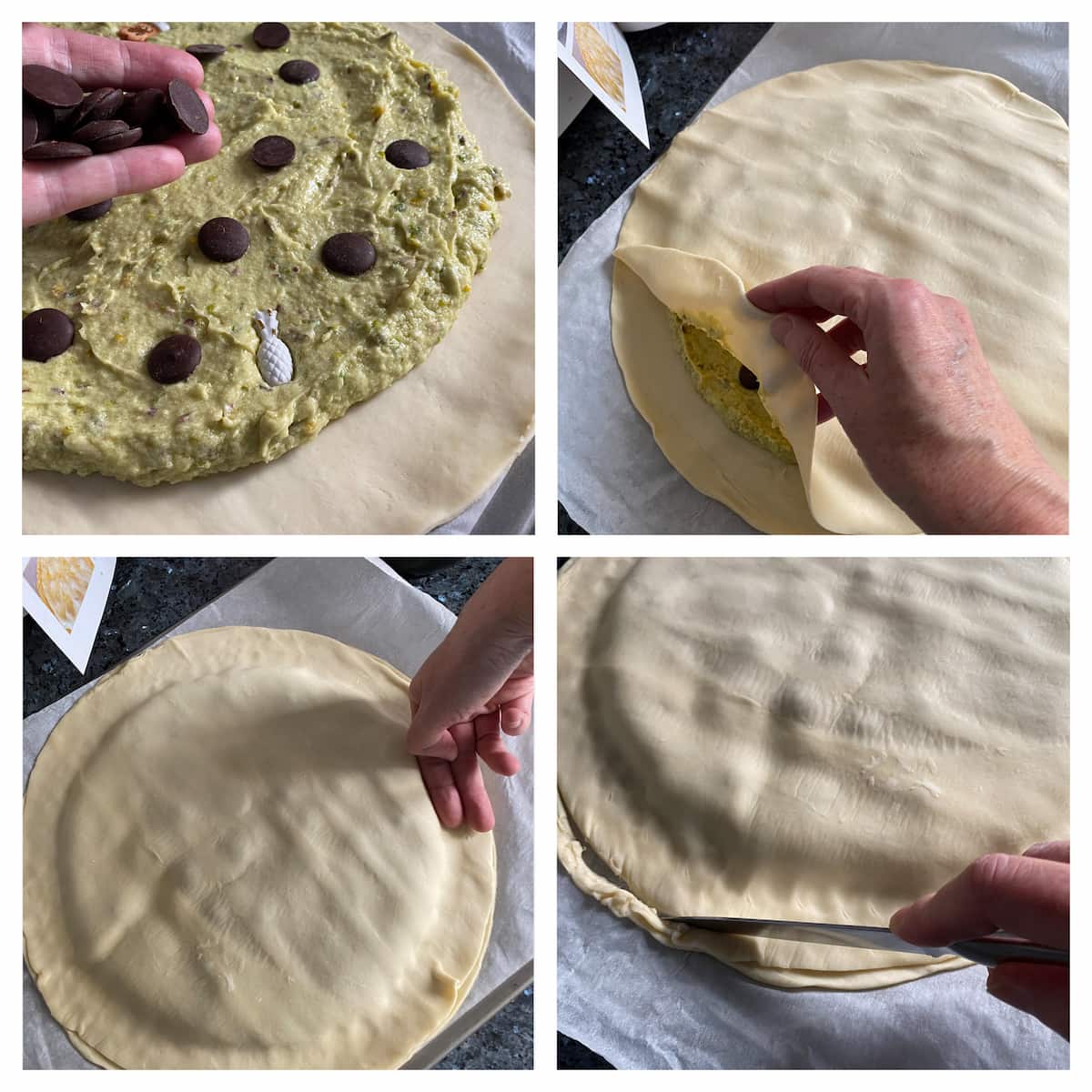 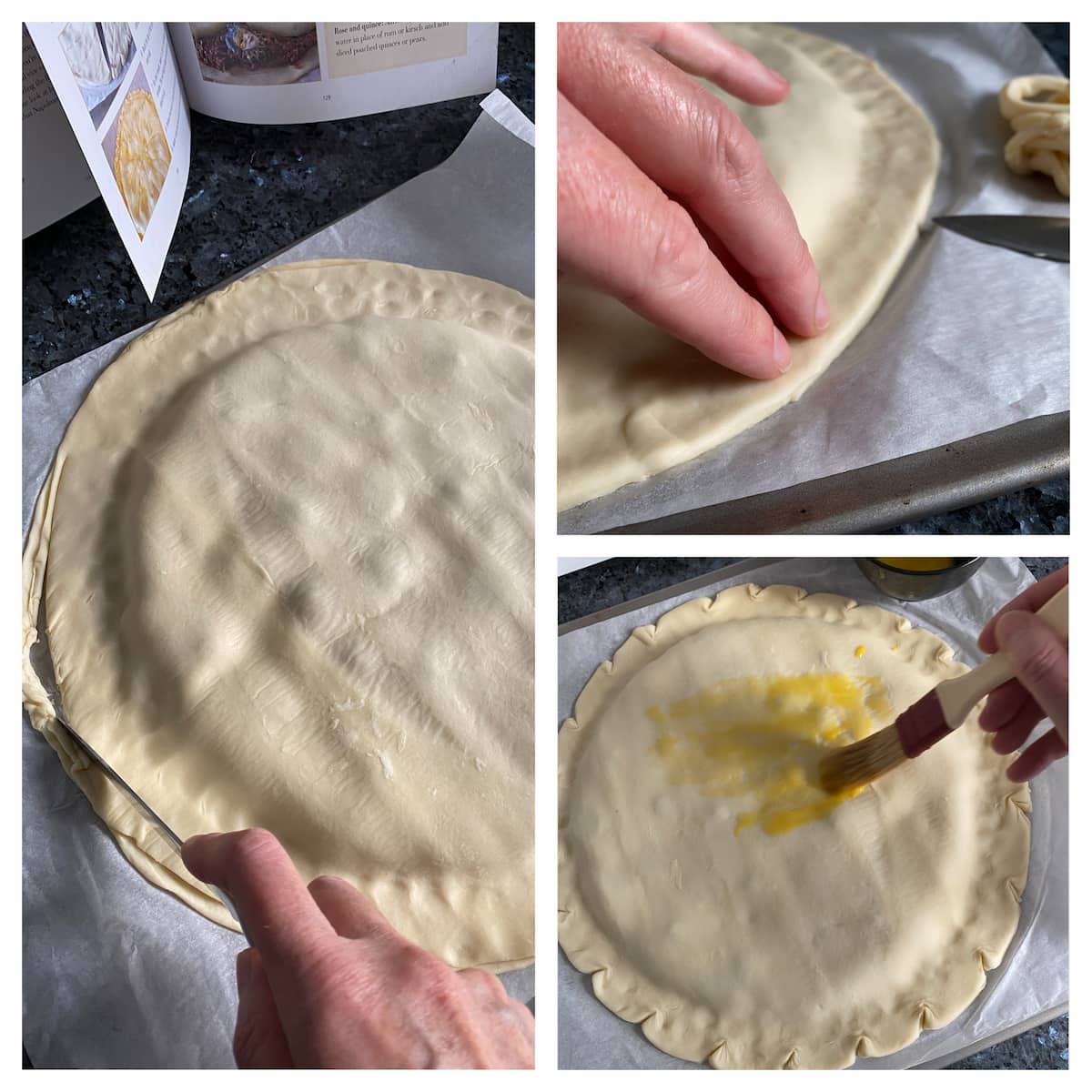 Decorate the galette with the back of a knife when the puff pastry is glazed and chilled first. 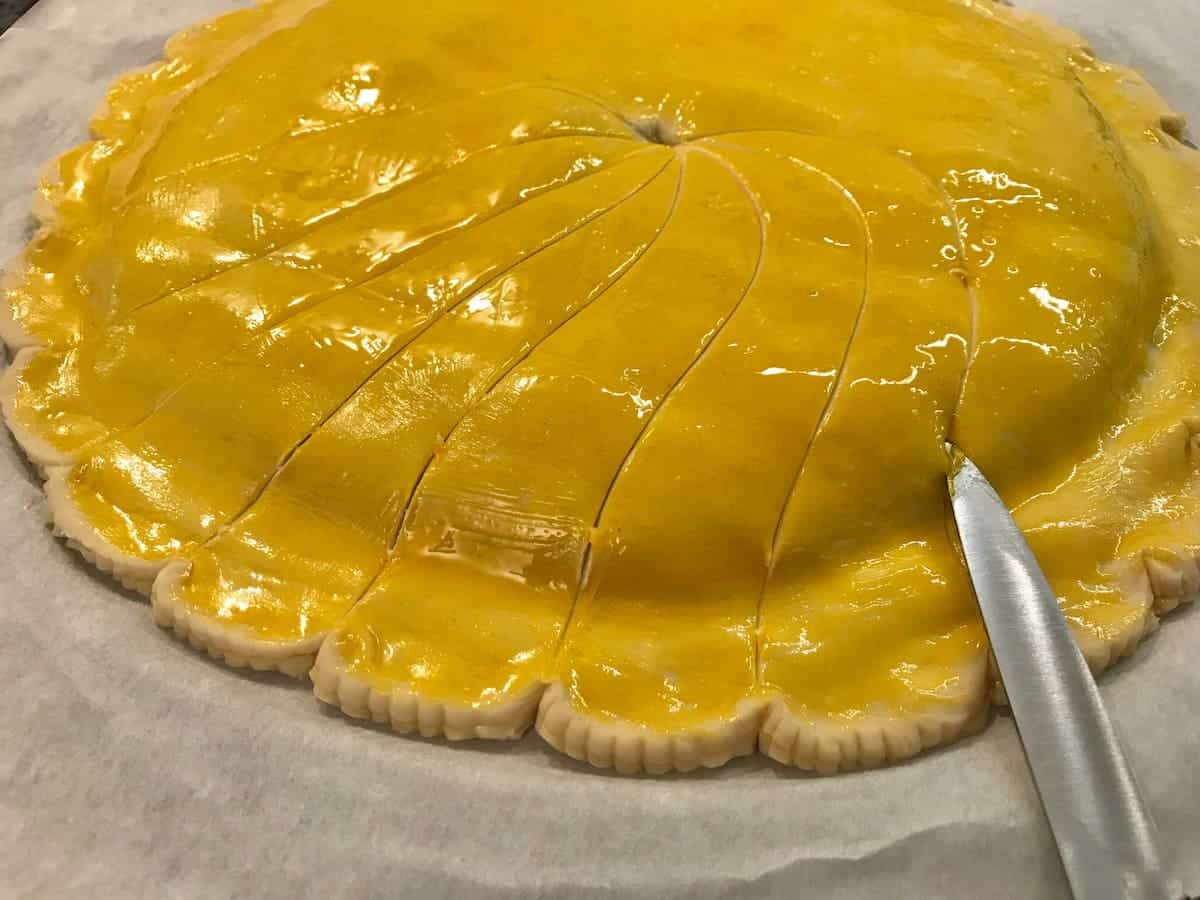 Either make a sun-ray effect (this is popular in pâtisseries), simple criss-crosses or be more original with your own creativity. This one below was done by my daughter, Lucie. 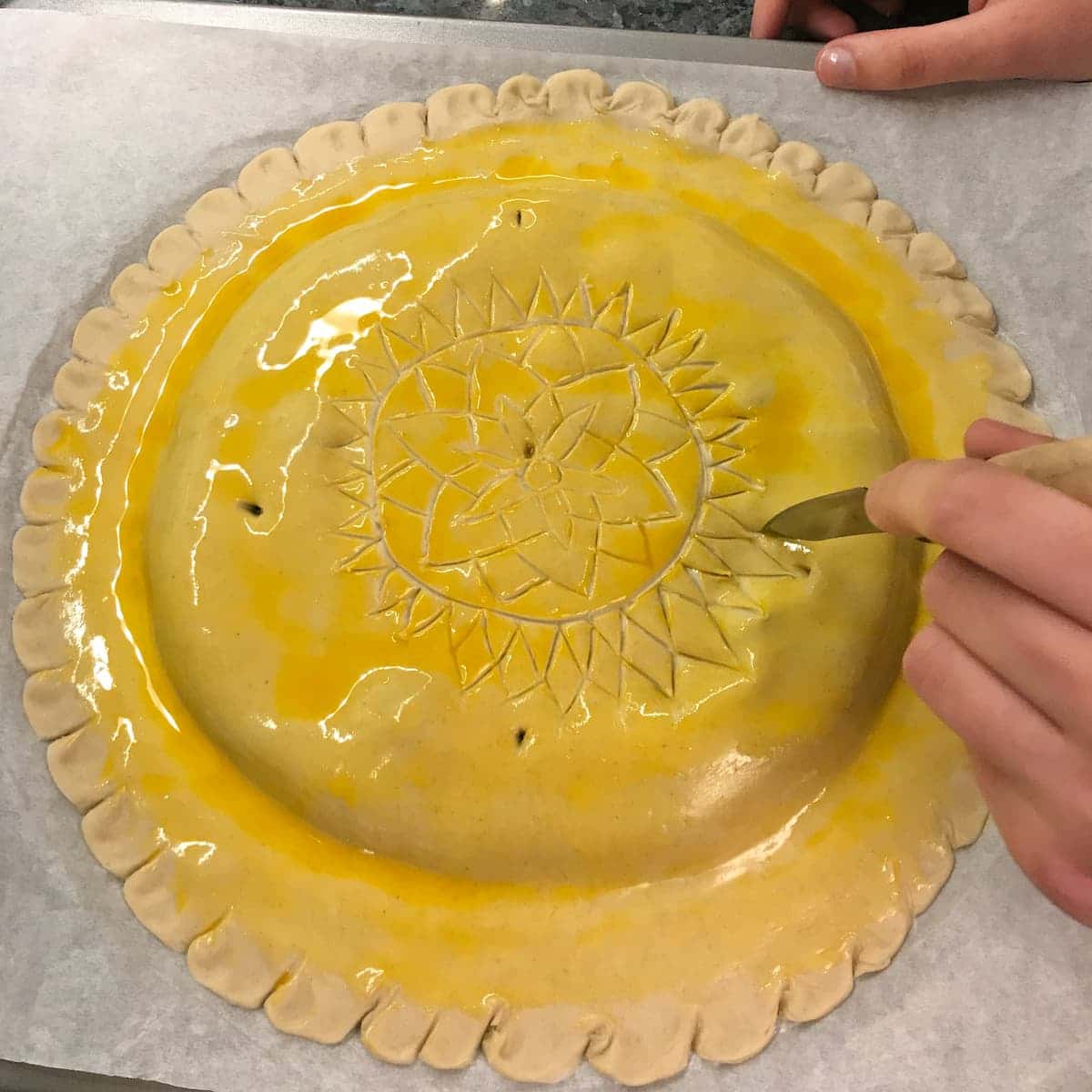 Decorating a galette des rois is up to your creativity (use the blunt end of knife). 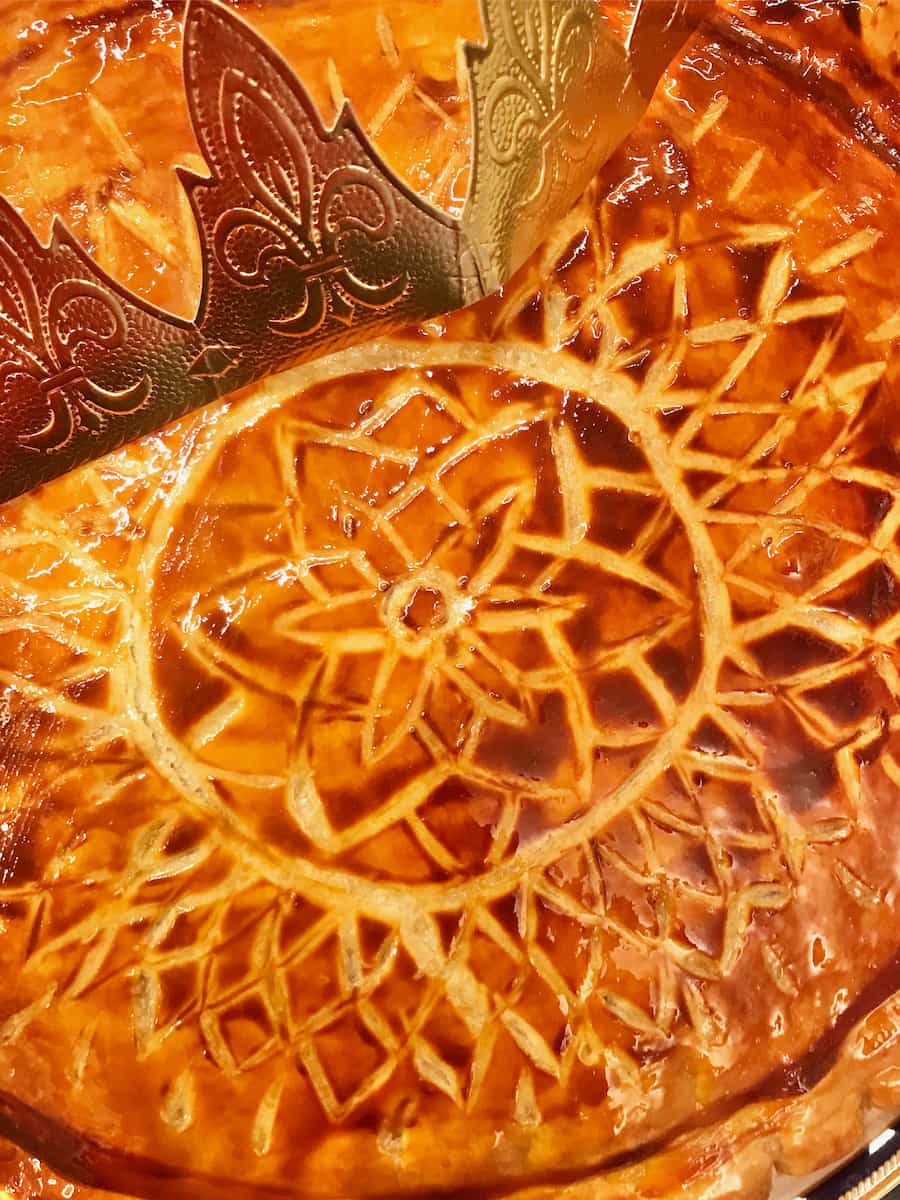 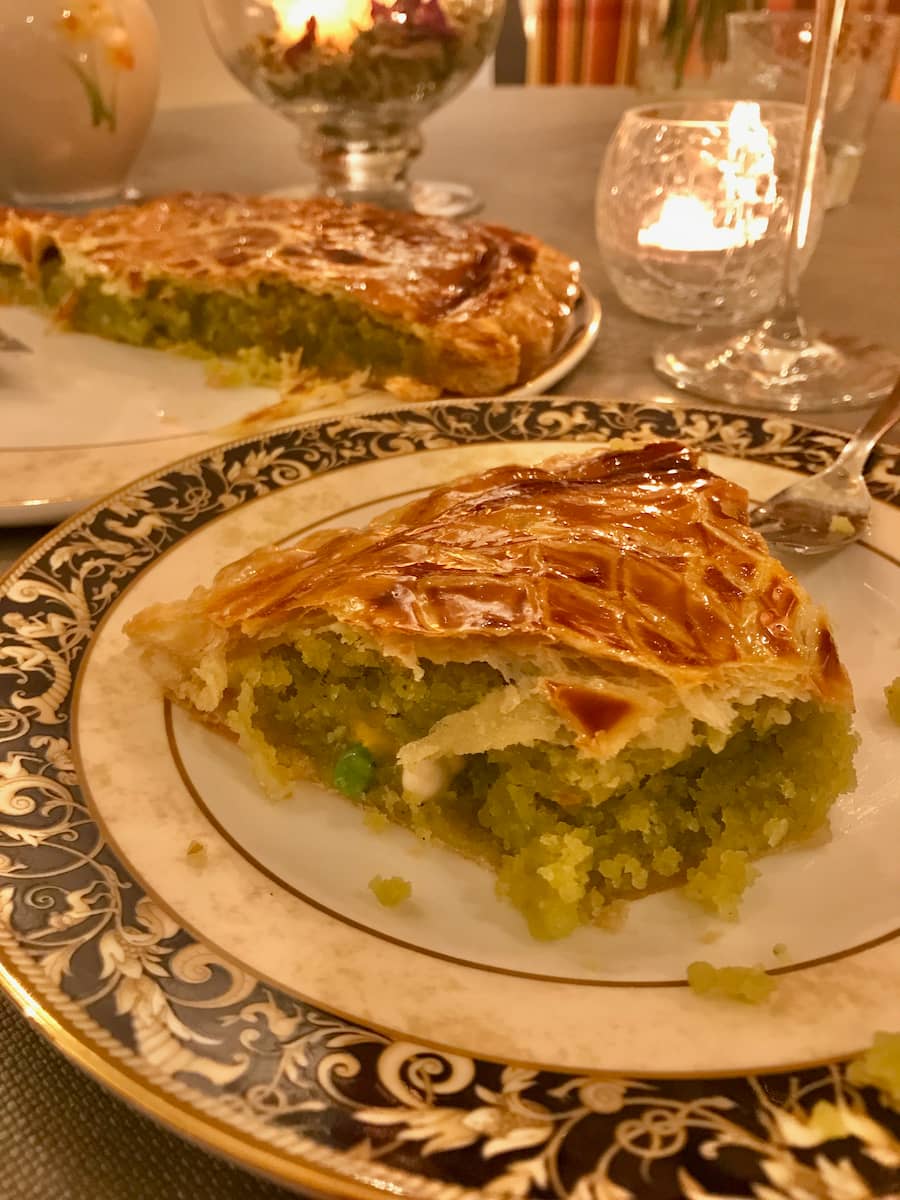 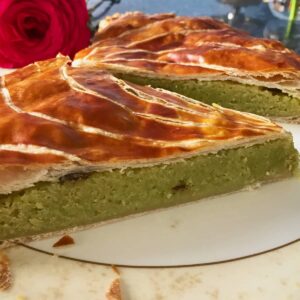 Recipe for the classic French galette des rois served around Epiphany in France, with a chocolate and pistachio twist. Extract and recipe adapted from my second book, Teatime in Paris! Don't forget to hide the trinket inside and have a crown or two ready for the winning King and Queen.

You can find my recipe (including detailed step-by-step instructions) for Pistachio and Griotte Cherry Galette des Rois and many more galette des rois variations in my 2nd recipe book, Teatime in Paris: A Walk Through Easy French Pâtisserie Recipes – as well as many more French recipes.

This post was first published 8 January 2013 but is now completely updated.