Corsican Veal Stew with Red Peppers, a comfort one-pot dish of veal with tomatoes, red peppers, garlic and onions from Corsica. You could replace the veal with chicken. Delicious re-heated and served next day with pasta.

As you may know, my husband is from the beautiful island of Corsica and so every second Christmas we join his family either in Provence or at the family house in the village in the Corsican mountains near Corte.  Believe me, either it can be mild or even much colder than Scotland!

This past Christmas Eve, we snaked down the long winding road to Corte to pick up a few things for the reveillon dinner: fresh oysters, a few baguettes, and a greedy few logs of Bûches de Noël from Grimaldi’s pâtisserie to keep the family sweetly content over a couple of days.

With bells peeling, light struck the church tower and the last of the golden leaves clinging to the branches glistened like threadbare tinsel. A crouched elderly Corsican woman dressed head to foot in black scuttled into her house just after I took this shot of the Church. She must have been running in to check on her stew (known as a Stufadu in Corsica), as I could smell the most gorgeous fragrance wafting from the front door. The most well known Corsican Stufadu is made with beef and dried porcini mushrooms. 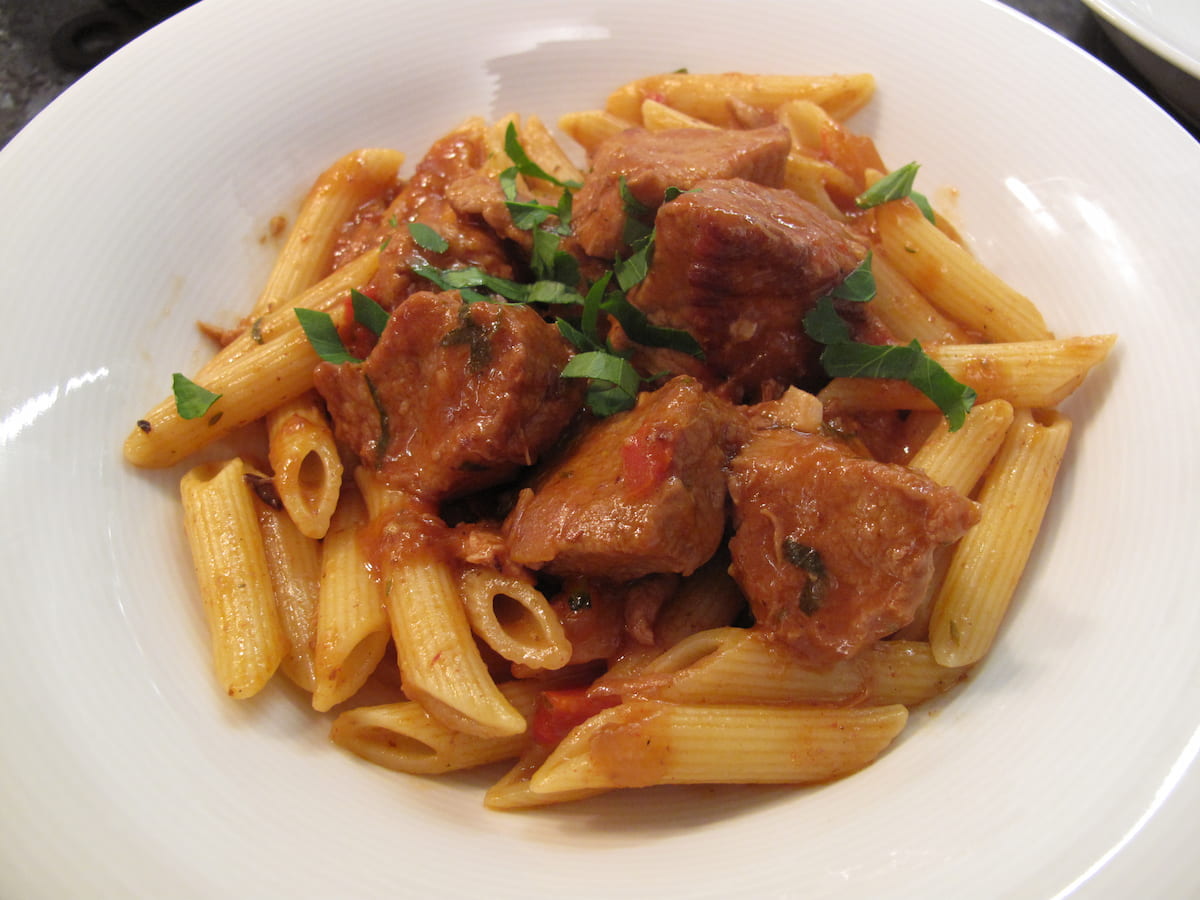 I picked up this Corsican Veal stew with Peppers from Rolli Lucarotti’s book, “Recipes from Corsica”. It reminds me of a Veau Marengo, invented in the Ile-de-France for Napoleon (even if it was originally chicken) but instead of adding pickling onions, carrot and mushrooms (also like in a Blanquette), this is a slightly lazier version.

Here I’ve slightly adapted the recipe by adding more wine, so that I don’t need to check on it during cooking for fear of drying out.  I’ve also used red peppers instead of green, more garlic (because the world needs more garlic!), plus a hint of flour just to thicken it slightly.

Pasta lovers will enjoy this served with Penne – and the good news?
It freezes so well that I make double quantities: freeze half so that it’s so easy to whip up a home-cooked weekday dinner and everyone will think you’ve been busy in the kitchen. That way you can make time to bake!

A comfort one-pot dish of veal with tomatoes, red peppers, garlic and onions from Corsica. You could replace the veal with chicken but the traditional recipe uses veal.

Serve with pasta, rice or potatoes. This stew freezes very well – so I normally make double quantities and freeze half: ideal for hearty pasta dishes during the week at the drop of a hat!
If you prefer this gluten free, replace the flour with half quantity cornflour/cornstarch – or, even better, chestnut flour for an extra Corsican touch.

This recipe post was originally published 27 January 2017 but is now updated with a printable recipe card.