French chocolate pear cake is so much easier than it looks. Served upside down with caramelised pears in coffee, it’s a gloriously sticky Autumnal teatime or dessert. 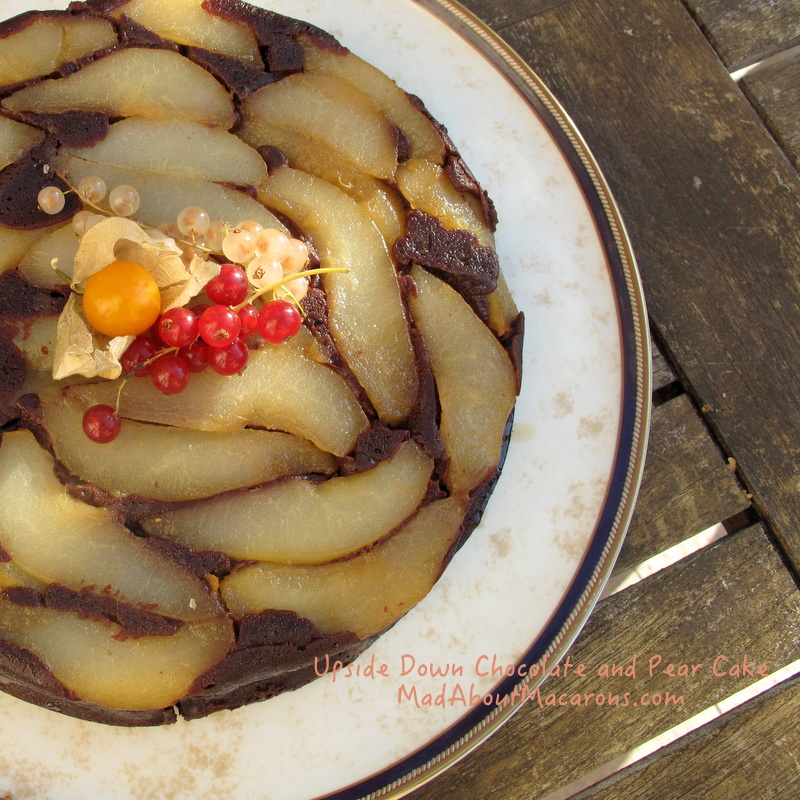 I hit on the idea of this chocolate pear cake while trying out a delicious recipe for a Drunken Damson Dessert by Angela Reid from Green & Black’s Chocolate Recipe Book. As I poured the chocolate mix on top of my damson-replaced nectarines soaked in the gin, I was thinking that next time I should try a non-alcoholic version.

So next time I flipped it upside-down so that the pears would be caramelised and glistening on top – rather like a Tarte Tatin style chocolate cake.

This is nearly a flourless cake since I added just a couple of tablespoons, just to cake it up a bit but for gluten-free diets you can skip the flour. I also love adding coffee to pear (see this coffee and poached pear recipe); the coffee also brings out the dark chocolate’s intensity.

The photos really don’t do this cake justice. The family didn’t give me much time to photograph it and, as it was at the end of the day, the sun was playing up and I was juggling the rest of dinner. There wasn’t even time to do a photo set-up. Plonk! Snap! But enough of my excuses. I suggest you make this and show me your much better photos of this cake.

What counts is that it tastes fabulous.

Prepare 3 sliced pears in a non-stick cake pan with the caramel underneath and cook them in the caramel.  Then top with chocolate cake batter. It’s so simple! 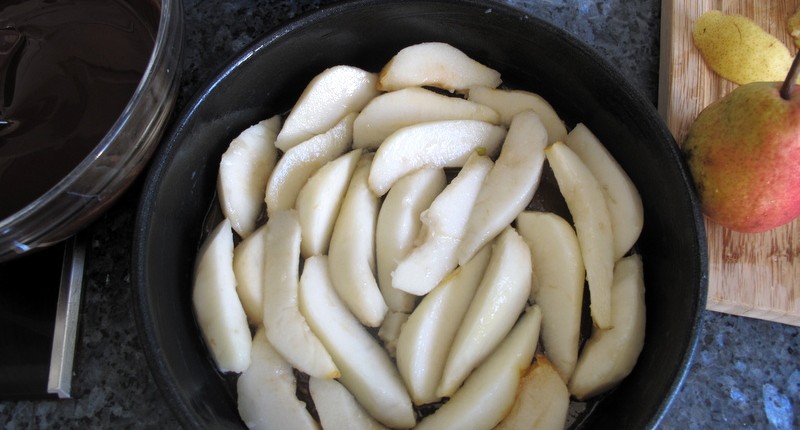 Serve either cold or slightly warm with cream but it’s just as good entirely on its own. 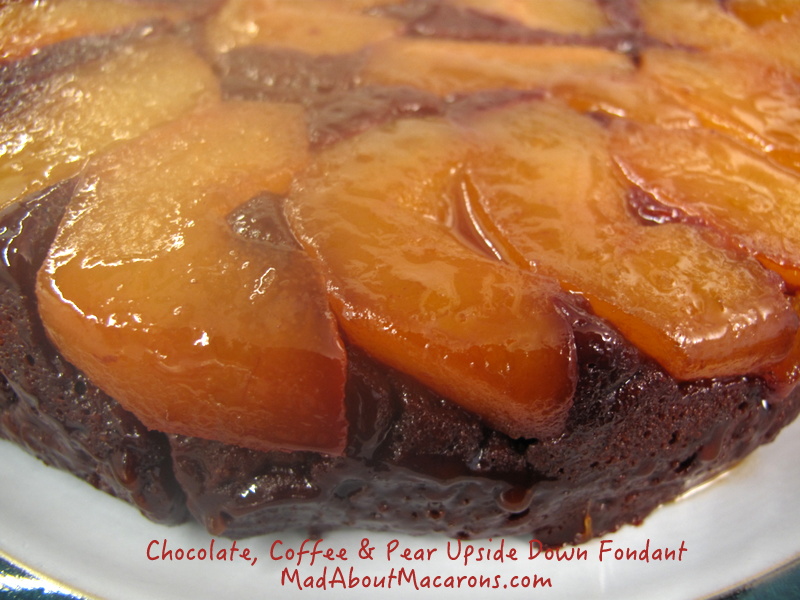 Update: An intense caramel photo shot with the chocolate and pear cake. Ah, is that better? I made this again and have updated the recipe to suggest you caramelise the pears just a little longer in the oven and have adjusted step 3 accordingly. But if you prefer the previous more natural poached look, then leave in the oven for just 10 minutes in step 3. 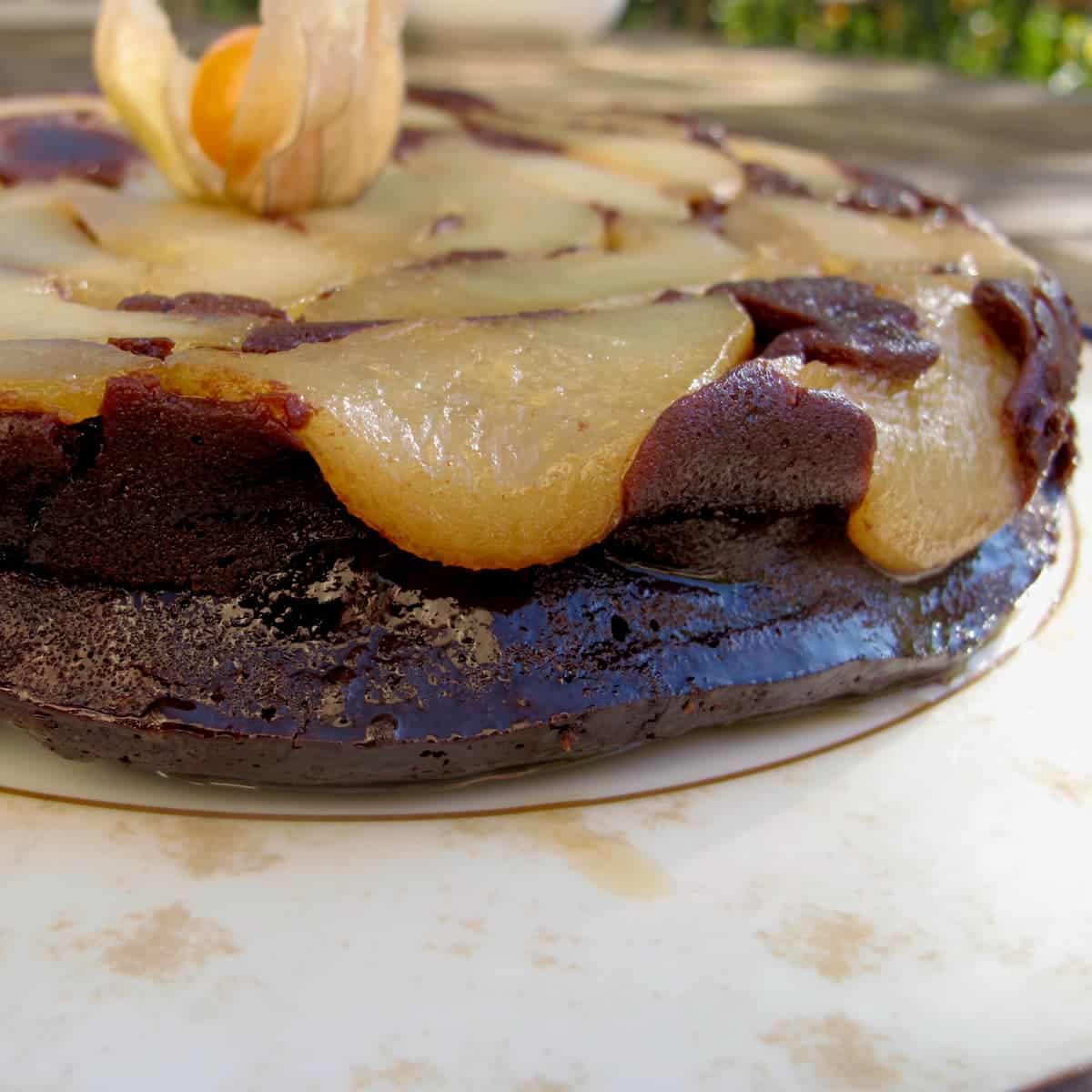 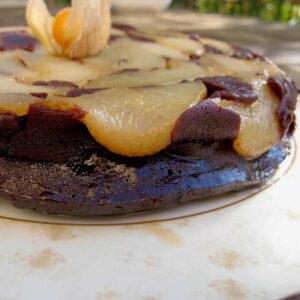 To make the Chocolate Cake Batter

Serve either cold or slightly warm with cream but it’s just as good entirely on its own. For a spicy kick, replace the coffee with candied ginger and a teaspoon of ground ginger.
Share this recipe