Pure chocolate mousse recipe by Patrice Chapon in Paris using the strongest 100% cacao content plus a brief description how chocolate is made.

How many chocolate storefronts do you know resemble dark chocolate?  Every time I walk past the Chapon boutique in Paris’s pastry street of rue du Bac, I could almost lick off the writing imagining it’s made of cocoa butter and gold leaf.

Patrice Chapon has been making his chocolate since 1985 from “bean-to-bar” from his workshop in Chelles (a suburb 20km north-east of Paris).

Originally a restaurant chef then pastry chef in Deauville, Monsieur Chapon then popped over the Channel for a short stint as official ice-cream maker to the Royal Family at Buckingham Palace – how cool is it to have had the Queen Mother surprise you one day with rose petals from the royal gardens, asking you to make a sorbet with them? After inspiration from Harrod’s food hall, he realised his real vocation was back in France making chocolate and by 2005, he opened this second shop in Paris.

It takes 10 days to make the chocolate as we see it in the store. Even the cacao growers in the tropics (10° North or South of the Equator) are amazed at what final result can be achieved from these simple looking beans.

He procures the beans after they’ve been fermented and dried, then does the rest himself. He grills them – 20 kilos at a time – for about 30 minutes at 105°C until they start to smell and taste like chocolate, even if still bitter at this stage. After grinding to obtain cocoa nibs then 8 hours maturing, he adds sugar (and powdered milk for milk chocolate), he continues to grind then liquify the cacao by a method called conching. Any acids or bitterness disappear after at least 48 hours and as if by magic, the end result after tempering and mixing, we’re left to discover the end result. 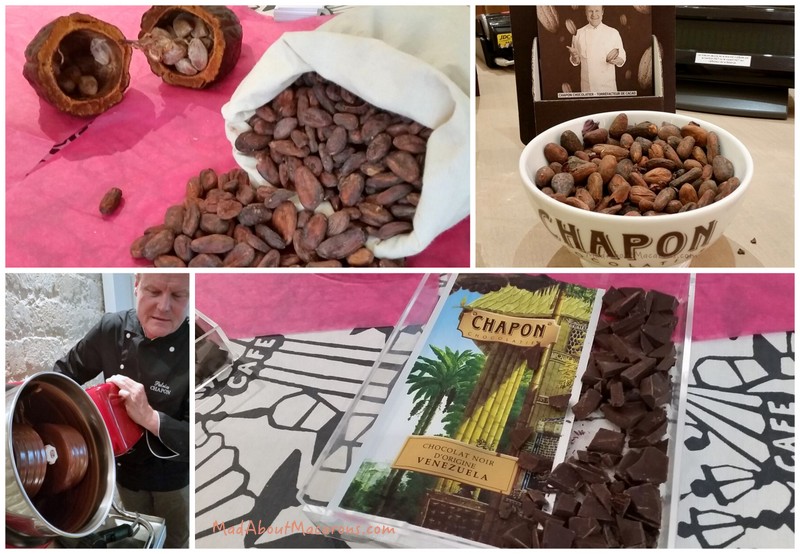 Tasting our way through the characteristic tropical-patterned packaged chocolate bars, each variety has its own subtle but particular flavours: Cuba has notes of spice and exotic fruits, Lucie agreed that Ghana has banana notes, and Madagascar has real after-notes of red fruits.

With wide-eyed children looking on at the generous samples laid out in front of us, Chapon surprised them with his witty Willy Wonka remark in French, “With this ticket, adults have a tasting of a chocolate mousse cone; children have their tasting of salsify” (which is a popular root that’s served as vegetable here, especially I hear at the school canteen).

Their confused expressions were quickly transformed as their eyes feasted on chocolate lollipops. 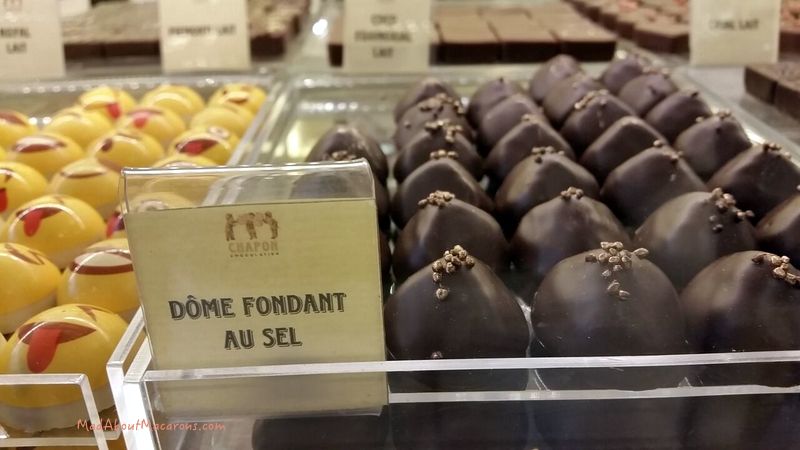 My eyes were for the salted praline Dômes au Sel, winners of the Mairie de Paris Chocolate Grand Prix in 2003. 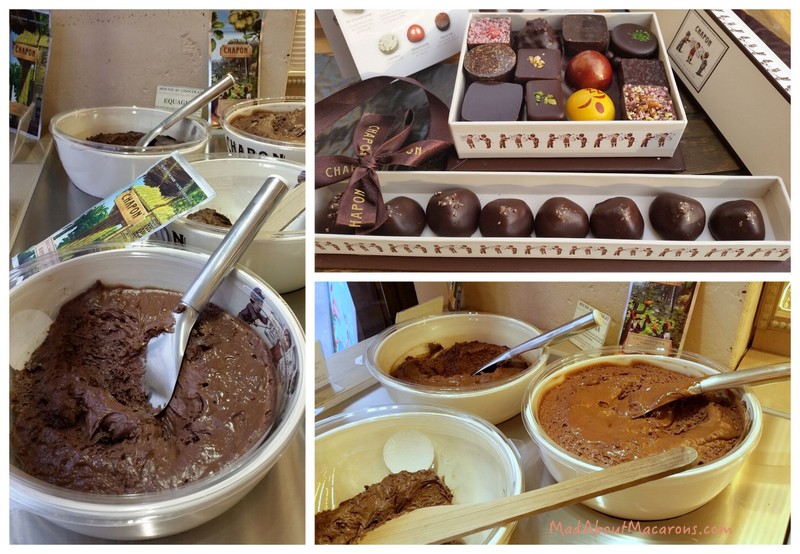 True to the chocolate bars, the mousses were so dense in chocolate, yet light and airy.  Chapon states that he uses about 20-30% less chocolate in his mousses due to the high cocoa content than more standard chocolate mousses that our grandmothers made.

As I left the boutique, realising again that I’d bought way too much chocolate (confessions of a chocoholic), I noticed that the recipe for the legendary chocolate mousse was printed on the brown paper bag. 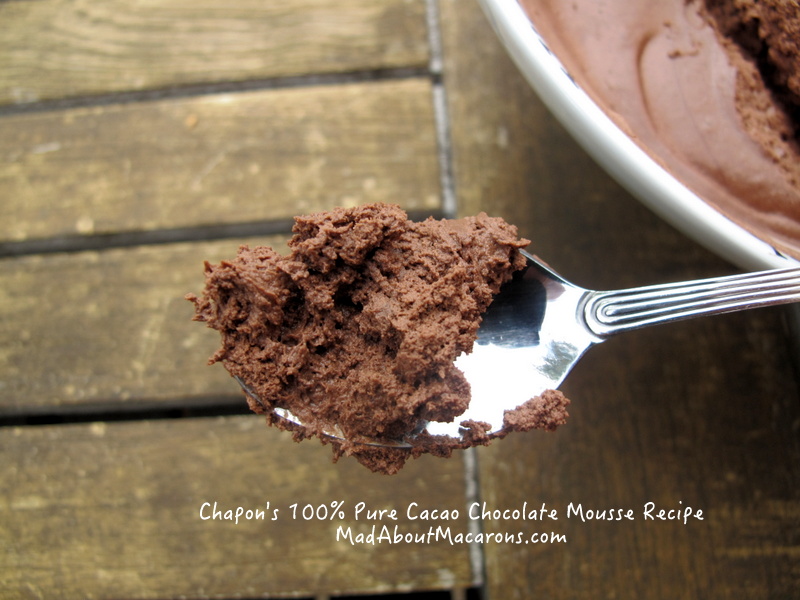 What Does the Strongest 100% Cacao Chocolate Mousse Taste Like?

With so many chocolate varieties to choose from, I thought I’d be adventurous and go for the 100% pure cacao Rio Caribe of Venezuela.  On the tablet’s back label, it even specifies “100% minimum”, which would excite any cocoa connoisseur!

If I have to make one remark, the recipe’s chocolate quantity of 185g isn’t that ideal for us shoppers, since most of the tablets are 75g and so with two bars I was 35g short of pure Venezuela.

As it’s 100%, also note that it’s drier than most classic mousses.  The aftertaste is intense – a little goes a long way to appreciate the flavours. Just as in wine-tasting, I’d even go as far as to say that this chocolate mousse is earthy or as we say in wine terms, “sous bois” or undergrowth (for more on tasting, see my post about different notes on the nose).  It was almost leafy or, dare I say, mossy. In French, moss is mousse – so I’ll leave you to groan at that pun! 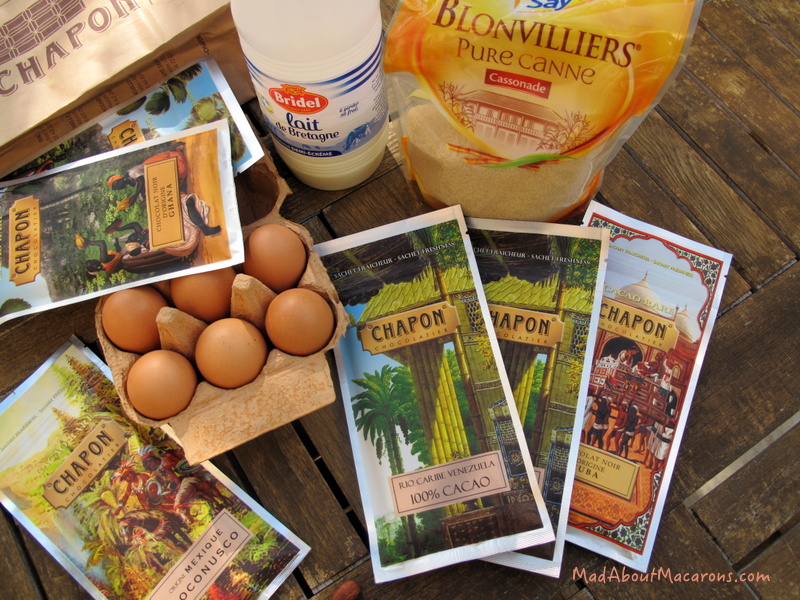 Patrice Chapon states the best chocolate to use for his mousse is 100% Rio Caribe. However, if you don’t want to use a strong 100% cacao tablet, use either Equagha, équateur, Mexique or Brésil from his choice of chocolate tablets. 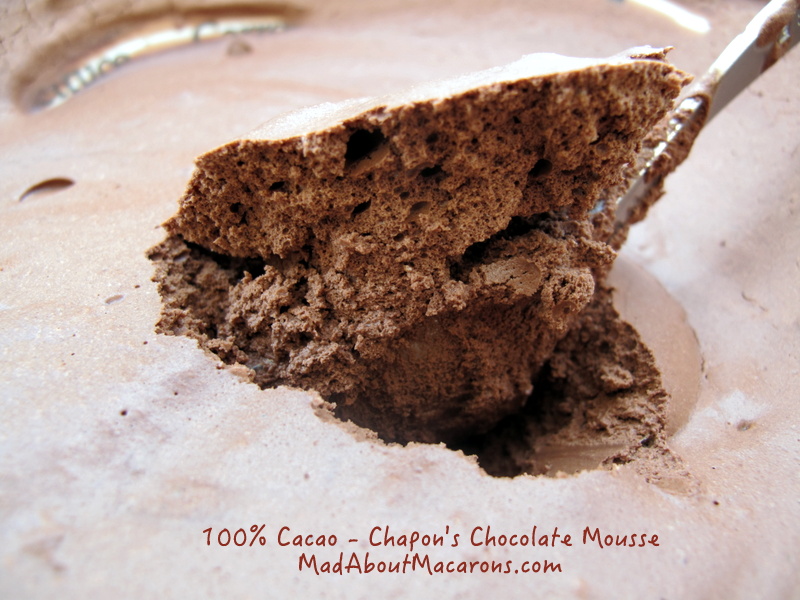 Serving suggestion: spoon into Almond Tuiles from my new book, Teatime in Paris! 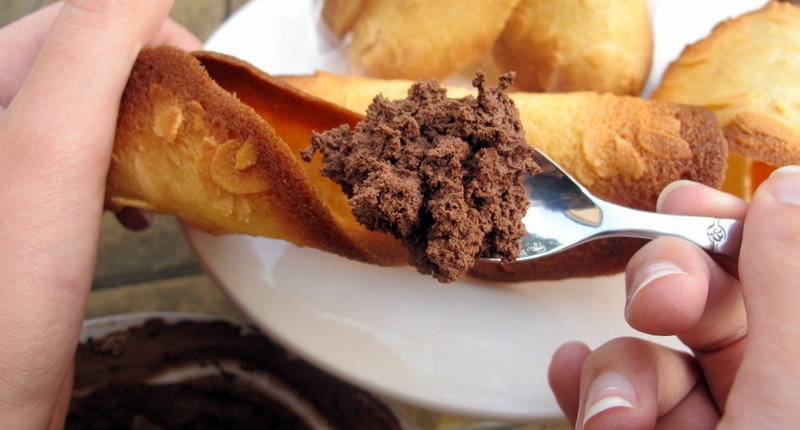 If you’re in Paris, either drop in and taste the mousse for yourself at Chapon’s boutiques.

See my article for more on the chocolate and pastry shops on rue du Bac, Paris. 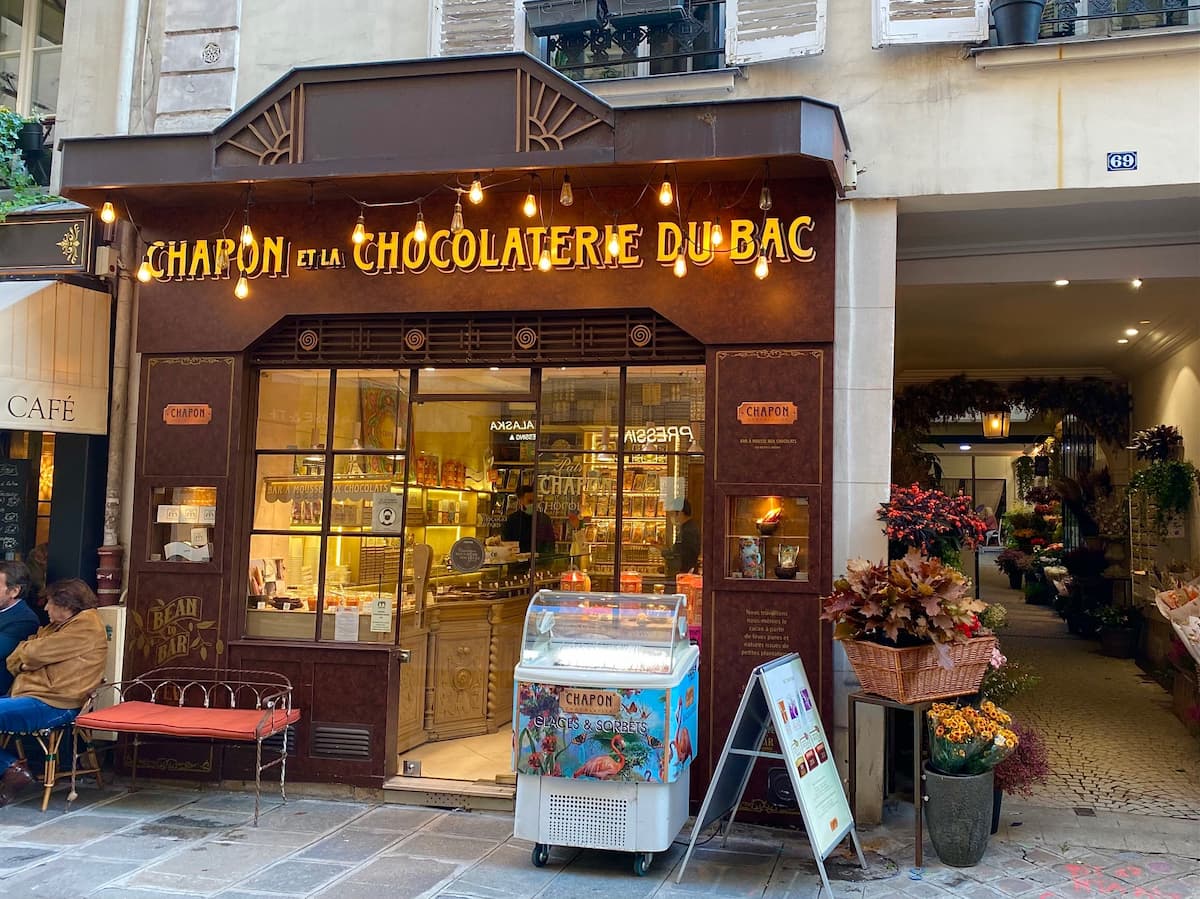 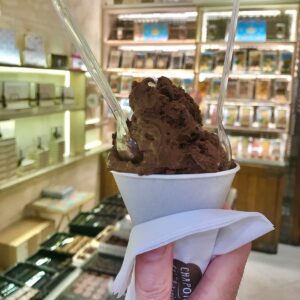 Patrice Chapon states the best chocolate to use for his mousse is 100% Rio Caribe. However, if you don't want to use a strong 100% cacao tablet, use either Equagha, équateur, Mexique or Brésil from his choice of chocolate tablets.

Serve with almond tuiles or macarons (recipes in my book, Teatime in Paris)

Disclaimer: This post was not sponsored in any way and I was not asked to write about Chapon in Paris.