Dubarry Cauliflower Cream Soup is a French classic, the crème de la crème of French soups. This soup also has a hot royal romance behind it, which simmered away between Versailles and Paris in the 18th century.

Discover what is Dubarry soup, its origin, who was Madame du Barry plus the authentic recipe. 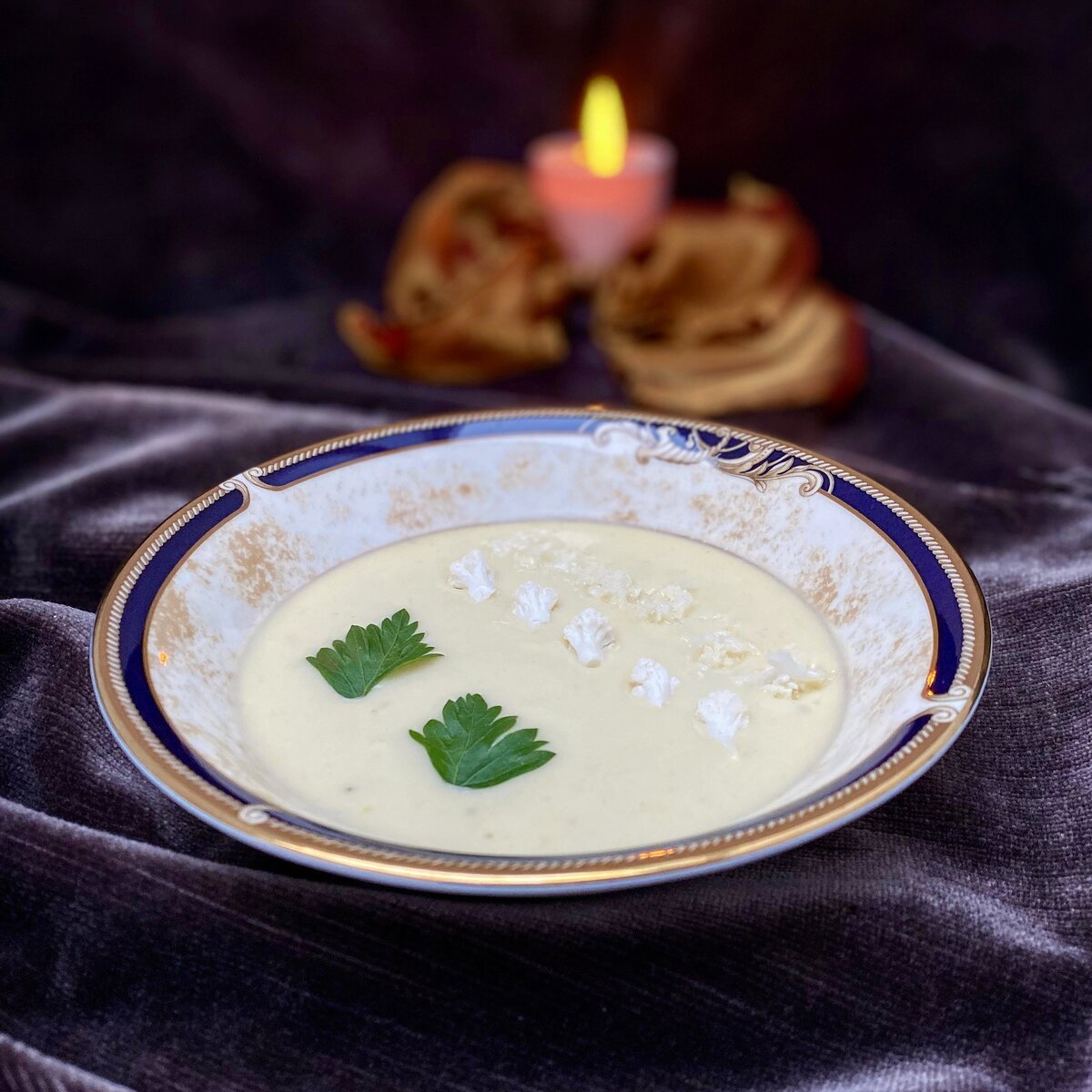 Why is it Called Crème Dubarry?

Its origin? It was created for Madame du Barry, King Louis XV’s last and favourite mistress, who adored cauliflower.

Turning to my French Larousse dictionary, anything called ‘Du Barry‘ in French cuisine contains cauliflower – from a simple salad to the most famous Crème Dubarry, often served on winter menus in chic Parisian restaurants.

Why Dubarry? This rich cream of cauliflower soup gets its name from the Comtesse du Barry, who adored the humble chou-fleur. Trust the French to bring cauliflower and a hungry royal love affair together! 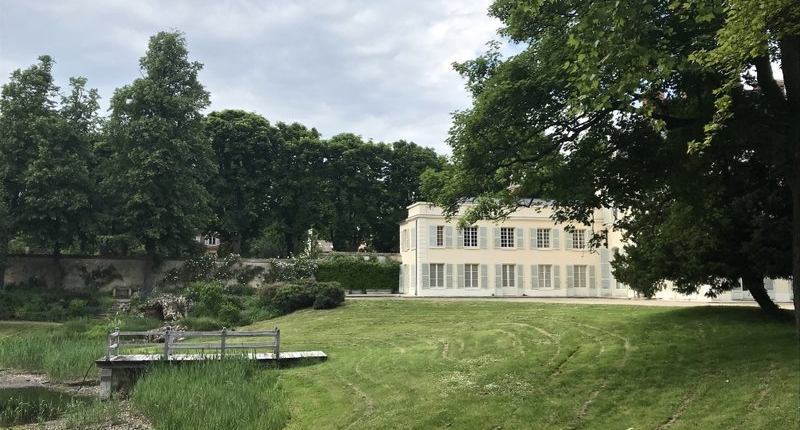 Who was the Madame du Barry?

The gourmet Madame, then Comtesse, du Barry was the last mistress and favourite of King Louis XV. (Not to be confused with the chain of Parisian boutiques, Comtesse du Barry. Known for its gourmet tinned meals of foie gras or truffles.)

Madame was renowned for her beauty, her blond curls, her blue eyes, her love for luxury – and her way of wrapping her little finger around aristocratic, influential men.

Antoine and I were intrigued to visit part of the residence given to her by Louis XV, where she stayed in Louveciennes in Les Yvelines, 10km west of Paris. Alas, the domaine is now private and not open to the public – but once a year for just a couple of hours, guided visits are arranged in May by the Office de Tourisme de Boucles de Seine.  As photos were not permitted inside the residence, my photos are restricted to the lush grounds. 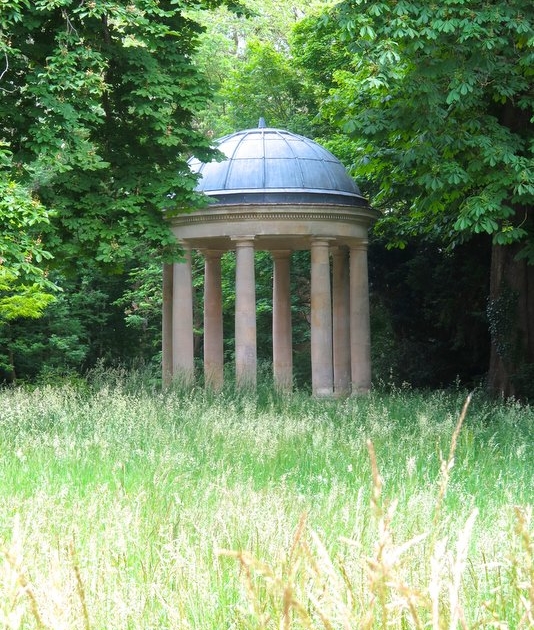 Louveciennes was host to painters such as Madame Vigée Le Brun (who painted 3 portraits of Madame du Barry) and the Impressionists. Camille Pissaro also later lived here and Sisley painted many landscapes, which shows not that much has changed outside her residence.

It’s another lovely walk in the area, as part of the 4 Impressionist Walks by the Seine (see my post on the Renoir walk from Chatou to Carrières-sur-Seine). 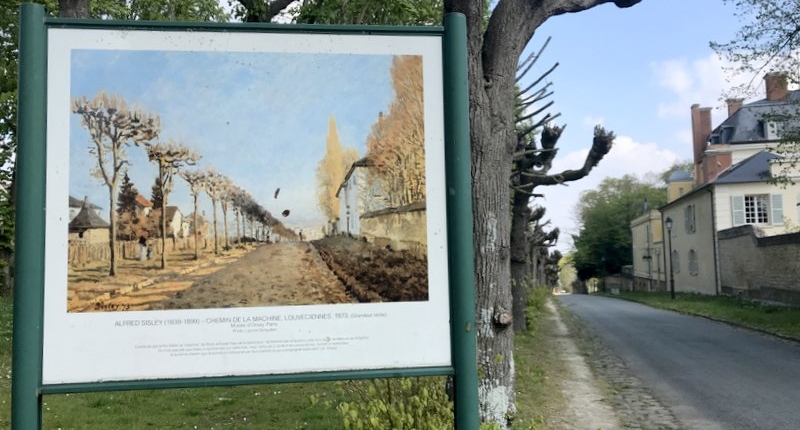 Outside Madame du Barry’s residence was the enormous pipe – still camouflaged today – in the lush countryside.

Apparently the noise of the water from the pipes was rather distressing for Madame; it transported water to the Versailles fountains from the Seine river via the Machine du Marly, an extremely incredible feat of engineering to cope with Louis XIV’s luxurious tastes for the palace.

The Countess wasn’t always a countess. Raised as Jeanne Bécu in a convent (since her mother had a dangerous liaison with a Franciscan monk), she then worked her way up from hairdresser to haberdashery in Paris. It was the wealthy, influential casino owner, Jean-Baptiste du Barry that changed her direction as Mademoiselle.

Jeanne became his mistress, and became mistress to others too in royal circles – right up to Louis XV. One problem: she wasn’t appreciated as being a non-aristocrat in French society and the king couldn’t see her unless she had a title. The King solved this by ensuring her marriage to Du Barry’s brother, the Count Guillaume du Barry in 1768, giving her title of Countess – even if she was and is still referred to as Madame.

After King Louis XV’s death in 1774, Madame du Barry wasn’t permitted to stay in the court (Queen Marie-Antoinette thought of her as rather common – read vulgar) and so she stayed here. She loved to lavishly entertain in her oak-panelled dining room.

It was apparently under this enormous tilleul or lime tree that the elderly King Louis XV and young Madame du Barry would sip chocolat together in Louveciennes, not far from Versailles. Although the luxury of chocolate (as a drink) was brought to the French court via Louis XIII then Louis XIV, it was Louis XV that was reputed to have loved chocolate the most.

Considered an aphrodisiac drink, the king prepared his own love potion chocolate drink in his apartments in Versailles. He added an egg yolk to his chocolate recipe to ensure its extra smooth texture. See the chocolate recipe here, via Versailles Palace.

Enough of the history of Dubarry – now on to making that soup! I wonder if they served the chocolate before or after that soup? 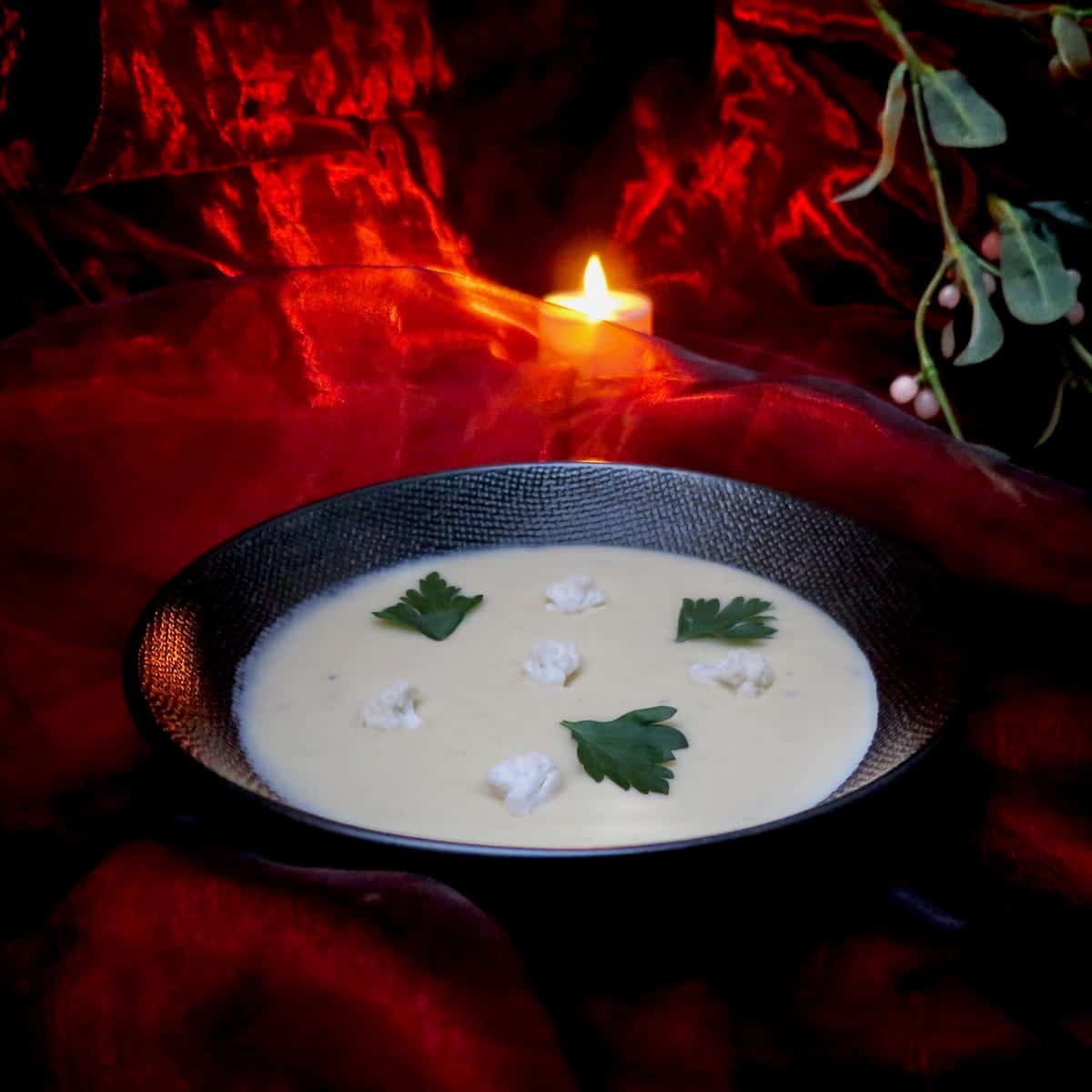 Keeping with rich, velvety textures, Countess du Barry’s chef, Louis Signot, created a soup with Jeanne’s favourite vegetable. It was so simple yet sophisticated enough for royal approval. According to the French culinary legend, Auguste Escoffier in his Guide Culinaire (page 34), there are two versions of Dubarry Cauliflower Soup. 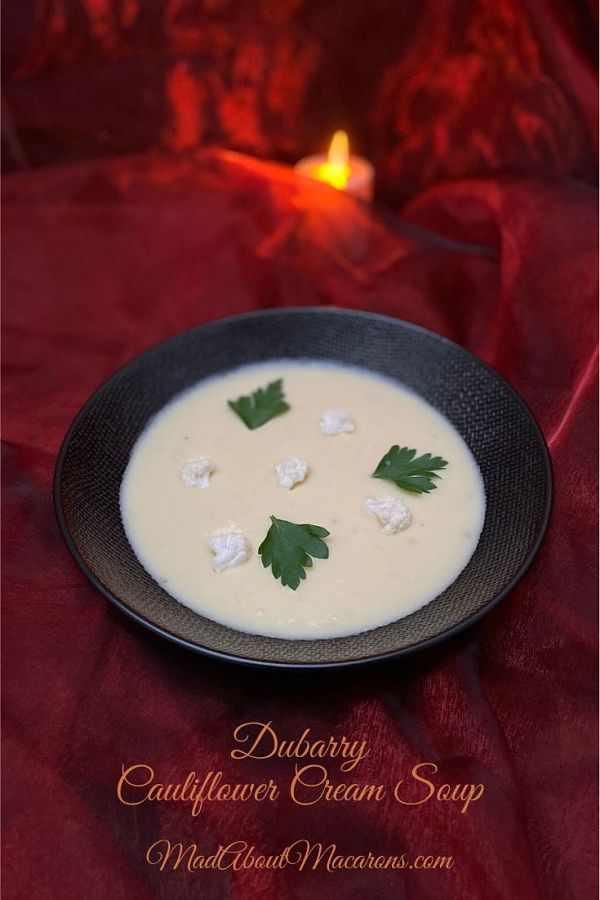 One is a cream based on milk, cream and potatoes; the other Crème Dubarry or Vélouté is based on a white roux (butter and flour) with added egg yolks and cream at the end of cooking.

Seen as Louis XV’s chocolate potions included egg yolks, I’m guessing the King cracked for the latter version. So I’m sticking with this. One recipe I got at our local market, however, used a whopping 6 egg yolks. Instead I prefer the recipe as follows, as it’s silky enough without being too overwhelmingly rich to start off a meal. 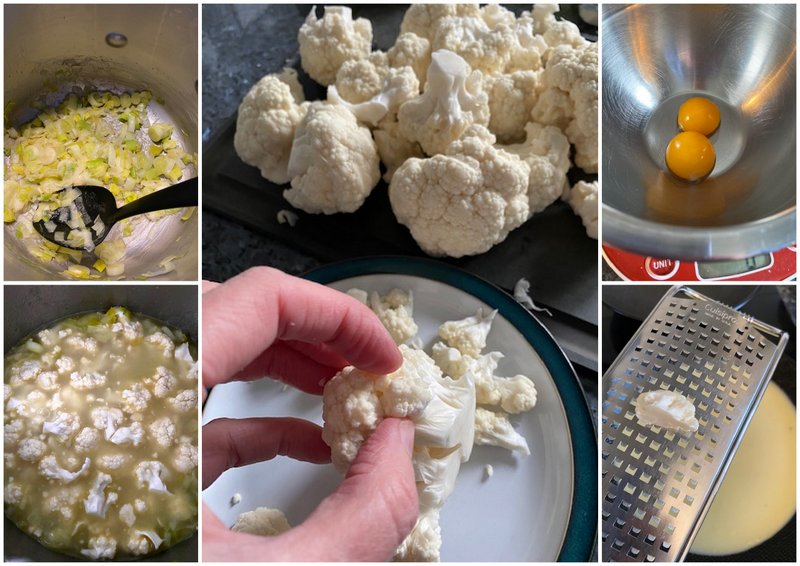 How to Prepare Dubarry Cream

Normally I would use a potato to thicken soup but this French recipe uses flour instead.

Make a white roux by adding butter, gently cooking the leeks and adding the flour to make a paste – then stir in the stock and tiny cauliflower florets. I also use this method for this creamy Mushroom Cappuccino.

All of the bitter cauliflower stalk is discarded. Small, digestible florets are used, cleaned first in a mixture of water with a little  vinegar. Keep the smallest florets aside for the garniture.

Once mixed or blended using a stick blender (AKA giraffe in French), create the liaison (pun totally intended with that romantic history).
A mix of the egg yolks and cream are gradually blended into the soup: add some of the soup liquid to the cream, then add the whole lot to create the Dubarry cream. 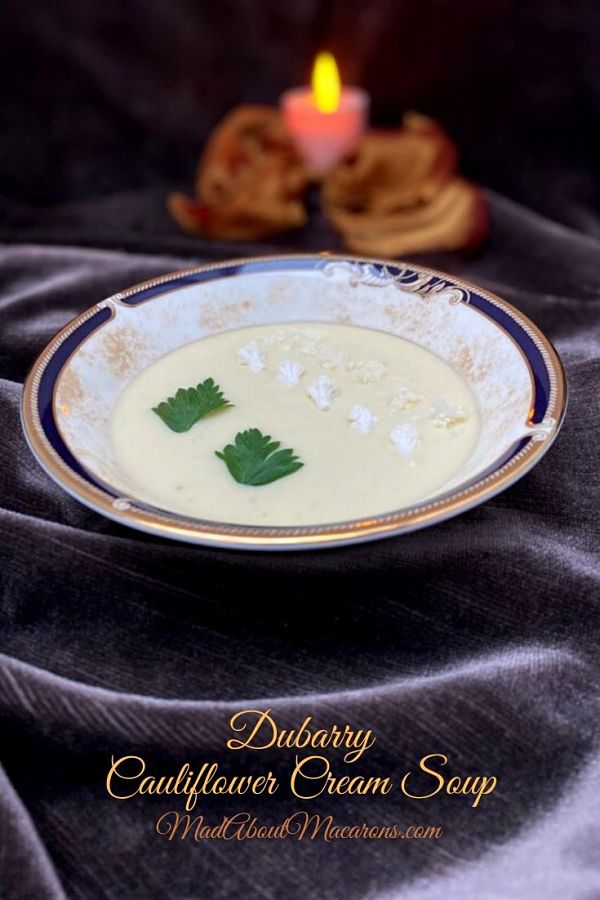 The garniture is just as important as the soup! The classic, according to Auguste Escoffier in his Guide Culinaire, is to add tiny cauliflower florets (pre-cooked à l’anglaise – English-style in boiling water) and some chervil.

My personal preference? Forget cooking the garnish. Just sprinkle with the smallest of raw florets: the raw crudité-style cauliflower adds a magnificent crunch! I also finely grate a cauliflower floret on top of the soup too.

Less Classic Garniture: Seared scallops are another possibility. If you’ve seen my recipe for Curried Cauliflower soup, I got the idea of adding seared scallops when tasting wine under January hailstones in Clos Veogeot at the annual Burgundy wine festival, la fête de Saint Vincent.

As the Parisian gerbet macaron wasn’t yet created in Paris, why not serve the Dubarry Cauliflower Cream with a mini curry macaron? The recipe is in the savoury macarons chapter from my book, Mad About Macarons! I’m sure the Countess would have approved, even if just for the mischievous fun of it! 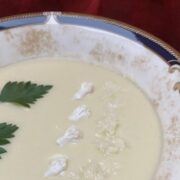 *  fresh chicken stock is best for this recipe, although I cheat and buy frozen stock from our local gourmet frozen French food store, Picard. Decorate with a few tiny reserved (raw) cauliflower florets and sprigs of fresh chervil or parsley.  Update (March 2020): Try the same recipe using broccoli - it's fabulous!
Share this recipe