Creamy Mushroom Cappuccino, a healthy French champignon soup made without cream and with a delicious touch of coffee. Serve in coffee cups and dust with unsweetened cocoa powder for the best effect! 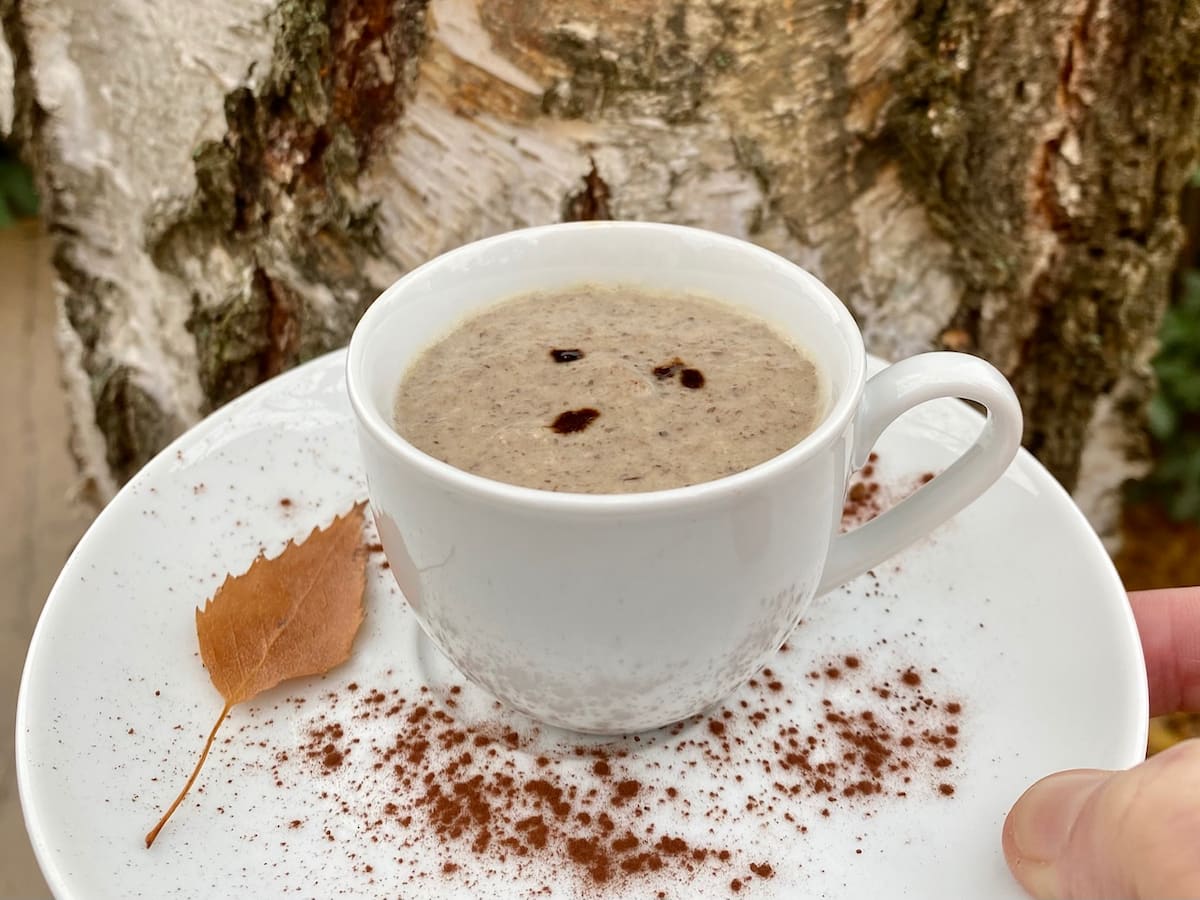 Want to take this mushroom soup to the next level?

Serve with a dollop of crème fraîche with truffle and the most fun mini mushroom and truffle savoury macarons. 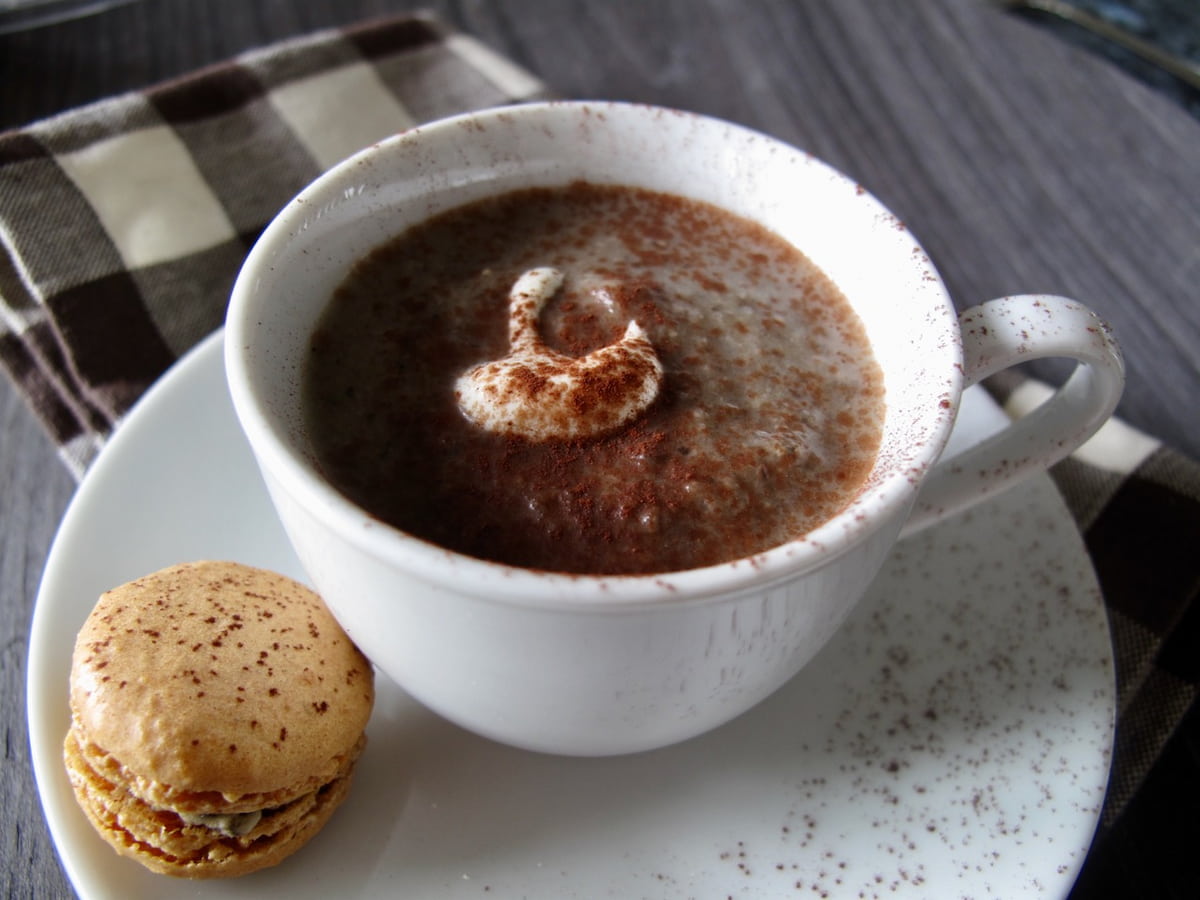 When I first bought mushrooms at the market in France, I was surprised to see how they were sold with such large stalks and earthy feet. They were totally different to the pale, pre-packaged mushrooms presented in cellophane punnets looking as clean as a button in supermarkets. While we can get the latter in our French supermarkets, why would I pick these if I can get the freshest, tastier ones at the local market for the same price?

I prefer using Parisian, cremini or portobello (giant cremini) mushrooms since I find they have more flavour than the normal white button mushrooms. 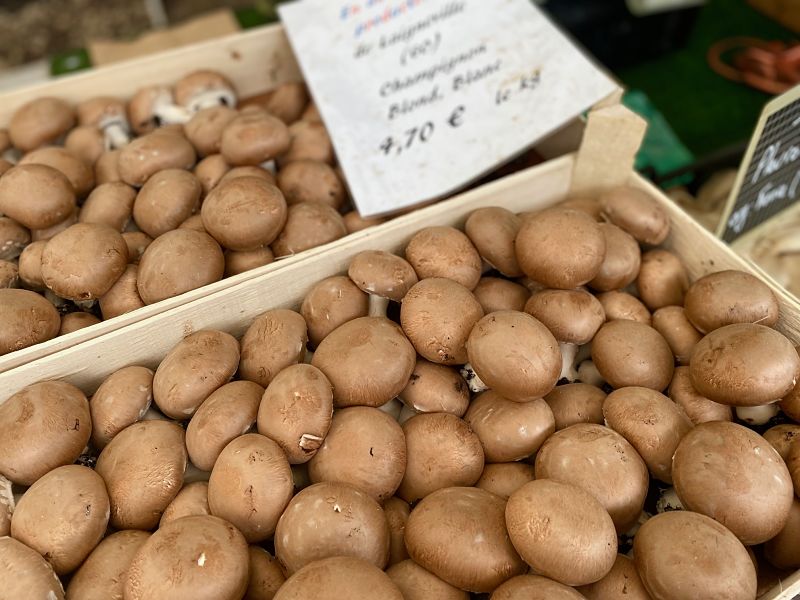 Have you tried savoury macarons? In France, they’re great as an apéritif – my favourite part BEFORE the meal that’s just so French. However, served with a mini coffee cup, this makes the best little amuse-bouche or teaser before the entrée, (starter or appetizer). 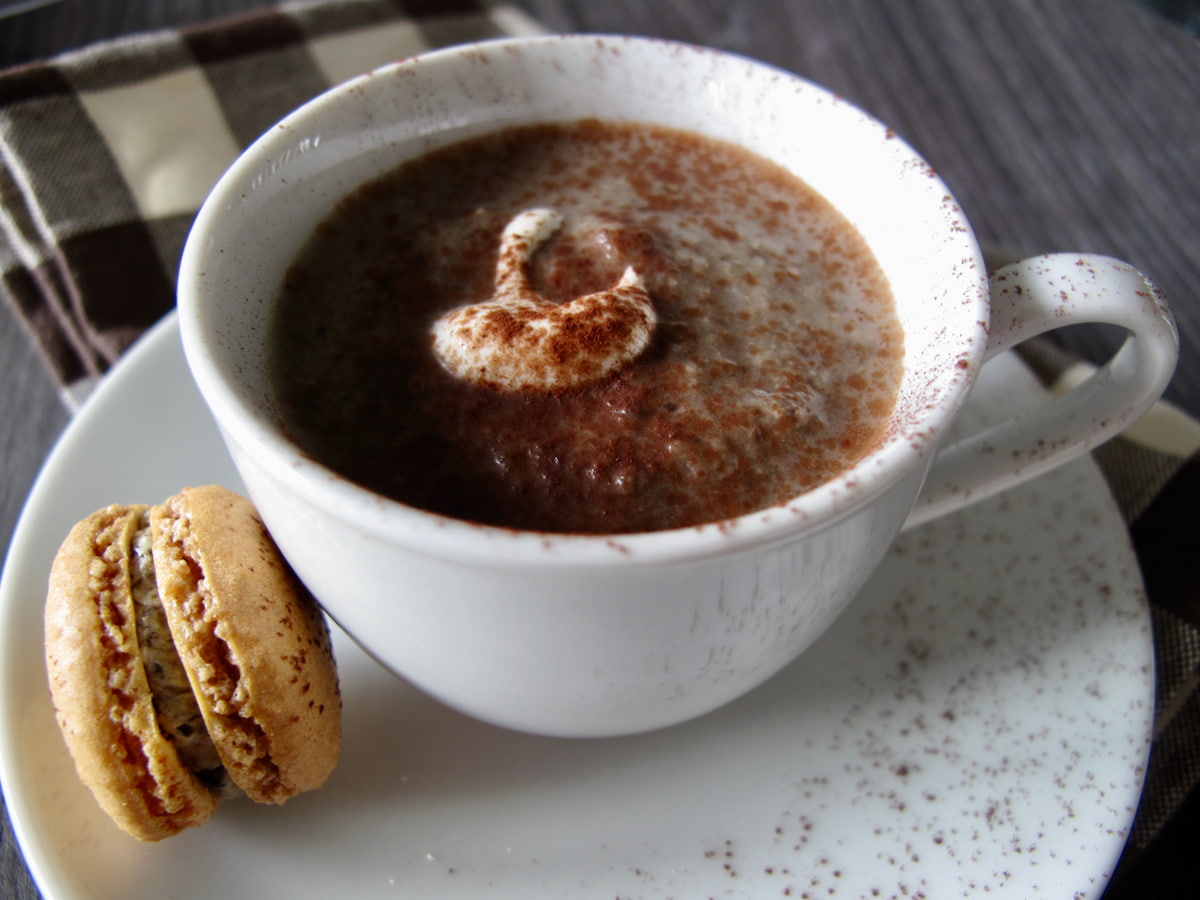 This mini serving of a mushroom cappuccino guarantees surprises at the table. Especially as the extra touch of coffee is a delicious surprise. Added with French mini mushroom and truffle macarons, you’ll have them laughing! I love seeing guests’ faces when I serve this.

What wines to serve with mushrooms? Serve with Champagne or a white wine from the Jura, an Alsatian Riesling or a fruity, almost honey-like Chenin blanc.

I call this a mushroom cappuccino as it’s served in a dinky little coffee cup. What’s more, it has coffee in it! Inspired by a starter of creamy mushroom soup in Brittany recently, the chef added a hint of coffee to the soup.  Who would have thought that mushrooms and a subtle hint of coffee could work so well? 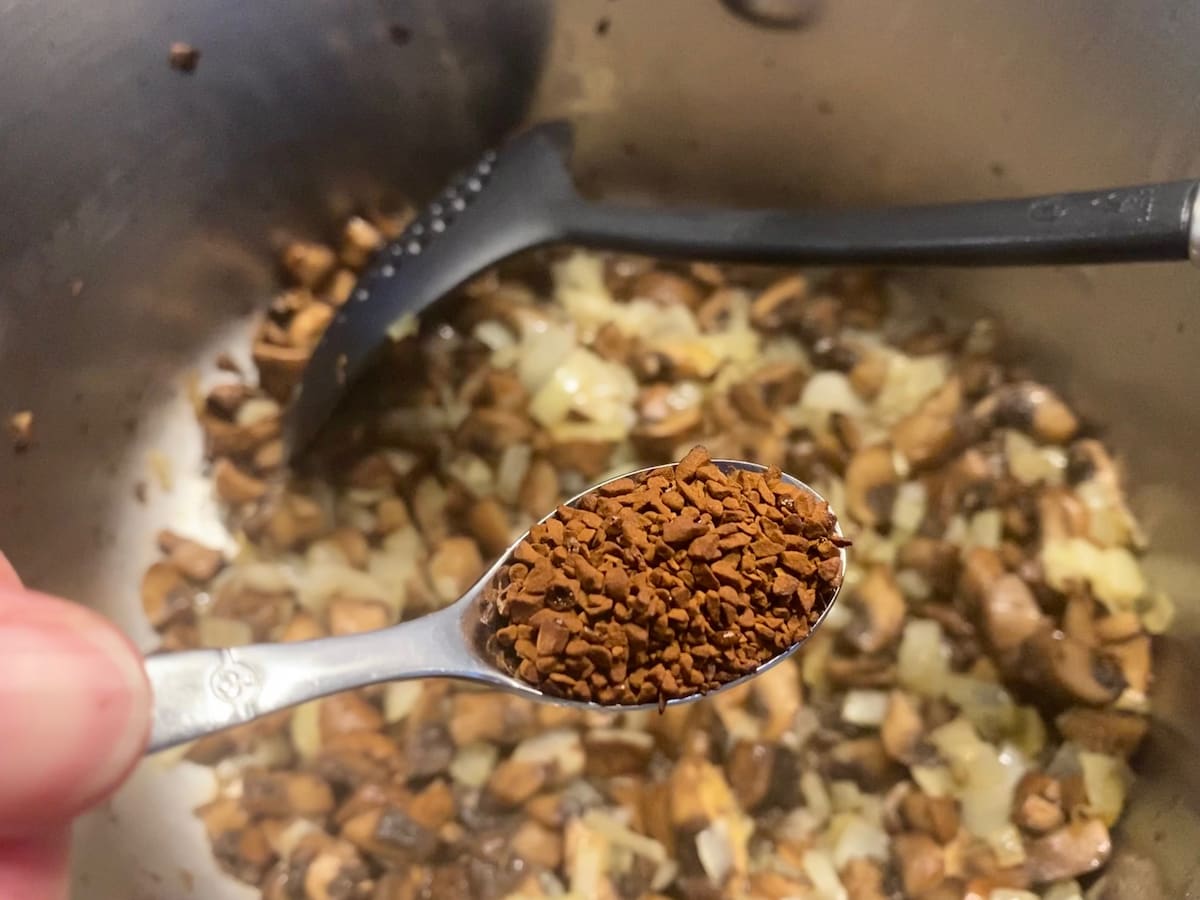 From a few experiments with this recipe, I recommend adding coffee granules – and at the end of cooking.  For this quantity, I suggest two teaspoons but taste it for yourself and see, as it may need a touch more.  It’s entirely up to your taste but the secret is to have just enough to taste it but create the intrigue.

The soup is so healthy. Before I made this recipe without any milk or flour. However, the end result left a slight wateriness to it.  I felt it needed a creamier texture – without the cream. So, by using the same method used for the Crème Dubarry (French cauliflower cream soup), I make a roux to create a creamy texture and gradually mix it into the soup. 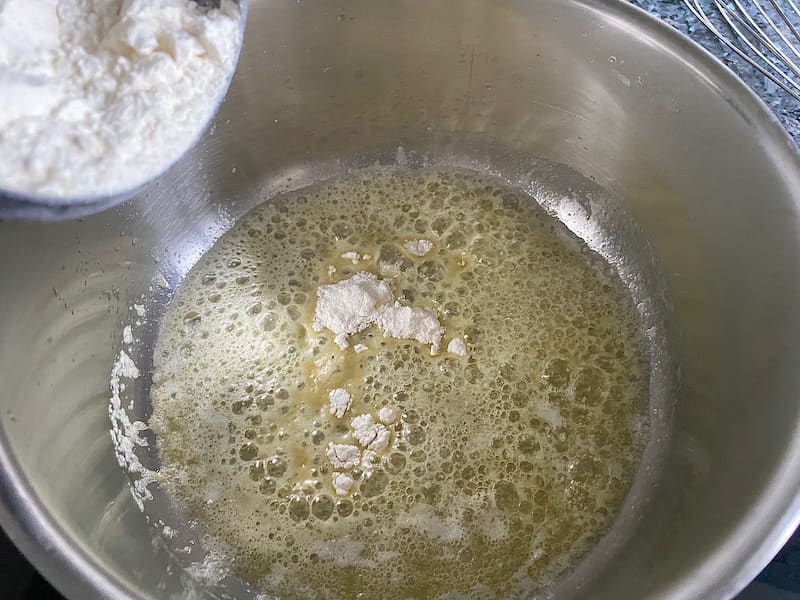 The creaminess of the soup comes by making a roux. First melt butter and whisk in flour 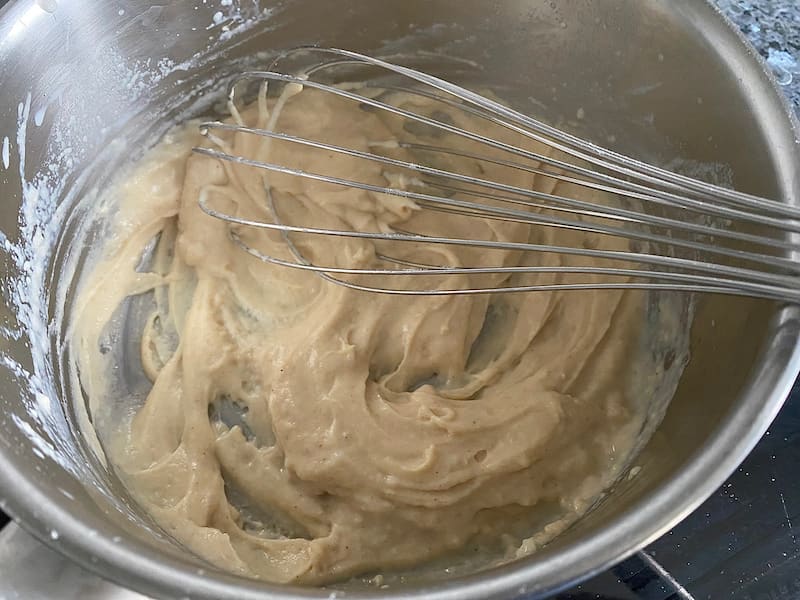 then once the flour and butter are creamy, add the milk until the paste is thick then whisk in some mushroom stock and add it to the soup

I use a little milk to make a liaison with a roux of butter and flour but apart from that, there’s no cream in it. However, if you’re not afraid of cream, add a small dollop of crème fraîche with a little truffle oil (or truffle shavings if you have them).

Finally top with a dusting of unsweetened cocoa powder (I use Van Houten 100%) – as this completes the cappuccino look. I use crème fraîche to make this quickly, but if you prefer frothing up some whipped cream (crème fleurette, 30% fat), then this will have a more authentic look. 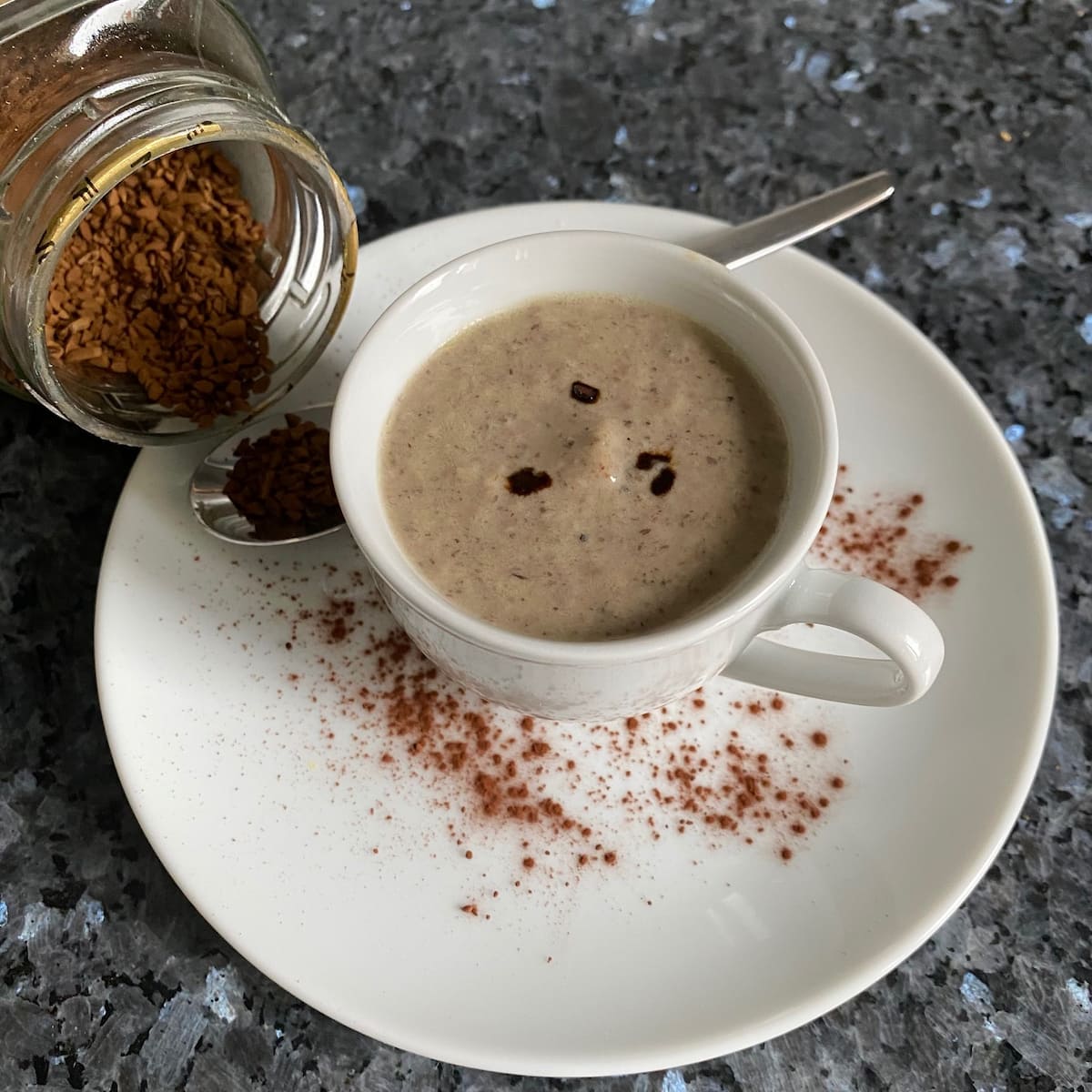 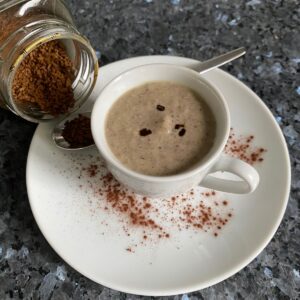 Creamy Mushroom Cappuccino, a healthy French champignon soup made without cream with a delicious touch of coffee. Serve in coffee cups topped with crème fraîche mixed with truffle oil and dust with unsweetened cocoa powder for the best effect!

For some extra delicious fun, serve with my mini mushroom and truffle savoury macarons for the best creamy mushroom soup effect.

This post was originally published 24 September 2012 but text is now updated to include better images and an added roux and coffee in the recipe.

How interesting this looks, Jill! Knowing how you enjoy the savory versions of dishes that are normally sweet, as I do, I would feel confident in trying this recipe. How creative to add the coffee to it! And, of course, the addition of the mini savory macarons would be perfect!

Thanks so much for such lovely words, Betty. I do hope you try it and come and tell me what you think. I’m sure it would be great fun in your tiny cups as one of your teeny teas x

Beautiful idea
Impressive for guests
And yummy as well
Thank you Jill Colonna !

Thanks so much for popping in, Yassine. Sending best of wishes to you!

Your Fruit a Day

Why we love pears in France, health benefits and our favourite French dishes using them – all on the new market produce page! What do we call a pear in a fun French expression? Read more…

Looking for your best afternoon tea address in Paris? Check out my local list of Parisian tea salons by your location.

Central in French food culture is market day. Join me at ‘our local’ to discuss recipes and random facts, how to prepare and choose fruit and vegetables – including fun French expressions using them. Allez – let’s step on the mushroom!

How do the slim French still manage to eat pastries, bread, cream and cheese? Do they really diet? Find out the first 5 tips from Julie Colonna: how to eat like the French.