Easy recipe for a moist banana nut bread topped with toasted walnuts – made with chestnut flour and decorated with more walnuts and figs. Reduced in sugar and inspired by the French-style cakes seen in Parisian bakeries. 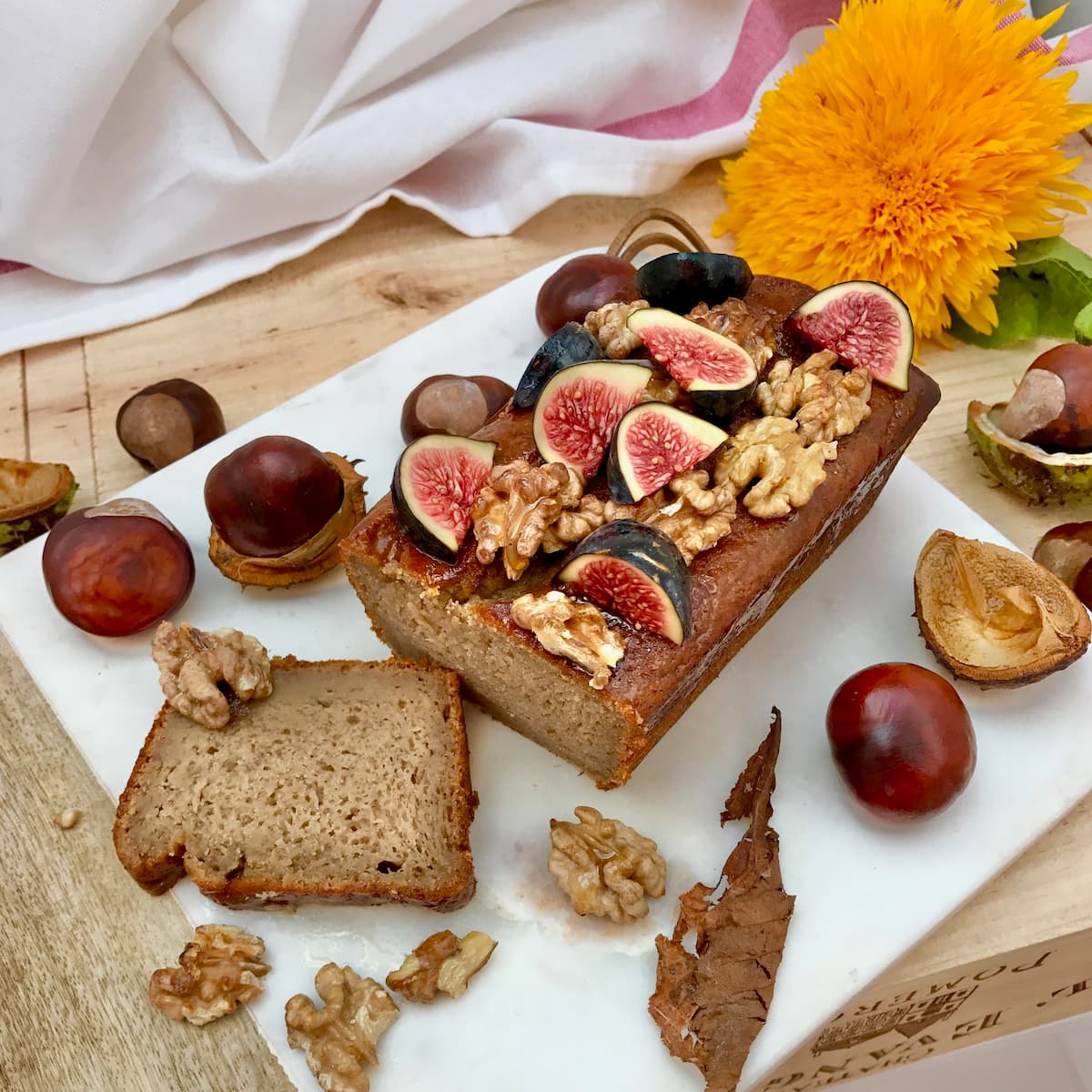 The wind has helped bring Autumn to Paris with skydiving leaves. At many metro exits, guys are selling roasted chestnuts on their familiar beaten-up trolleys. As that  first smell of woodsmoke hit me in the garden today, my thoughts returned to chestnuts.  With three bananas looking at me in the kitchen, rather heavily speckled and brown, it’s always a perfect excuse to conjure up this moist banana and chestnut loaf.

The kids love banana bread for breakfast: you may have tried this banana chestnut coffee cake recipe, inspired by a UK celebrity chef with the coffee but, in the end, it needed LESS THEN HALF of the sugar.

If you know my recipes by now, I’ve been so inspired by French pastry chefs. Ever since I learned that too much sugar kills the flavour of pastries and cakes, I consistently reduce sugar. As bananas are naturally sweet enough, even adding a little soft brown sugar is treat enough. Although I have added sugar in the recipe below, many times I make this without adding any sugar at all – although I appreciate it’s an acquired taste. I’ll leave that up to you! 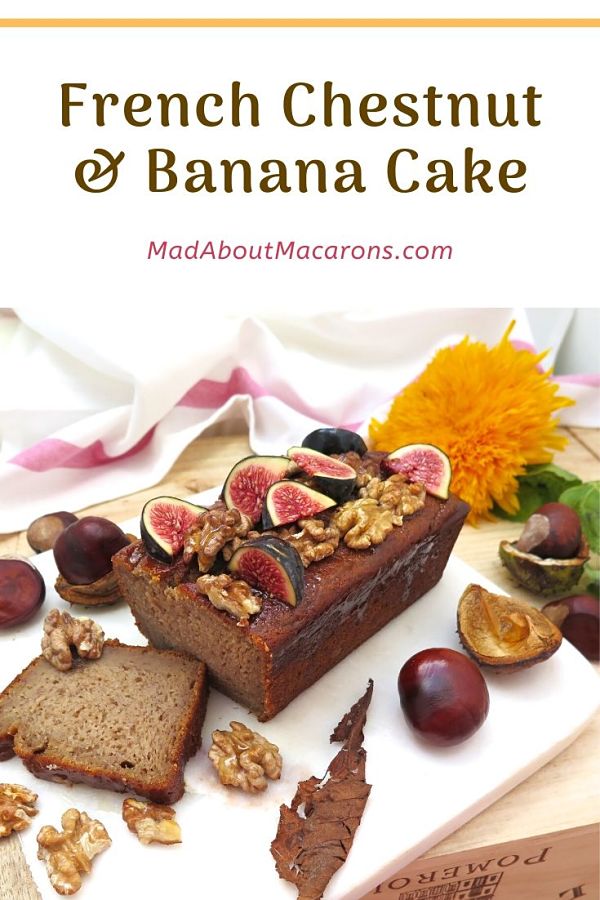 Are Chestnuts and Conkers the Same?

The conkers from horse chestnut trees are not edible – unlike the sweet edible chestnuts so popular in France.

The edible chestnuts are so popular in both France and in Corsica. As you may know, my husband is Corsican, and they love using chestnut flour in many recipes (have you tried this Chestnut Flour Tart with Pumpkin and Mushrooms? It’s Autumn on a plate!)

It adds that nutty intrigue and so that it’s not overpowering, use a a mix of plain flour with the chestnut flour, depending on the recipe. In this recipe, I add an extra two tablespoons of chestnut purée, which just adds that extra chestnut flavour and makes this cake extra moist.

Just so you know, chestnut flour does tend to make cakes rise less, so although it doesn’t look the most photogenic of cakes, the taste is what counts. It’s so good! 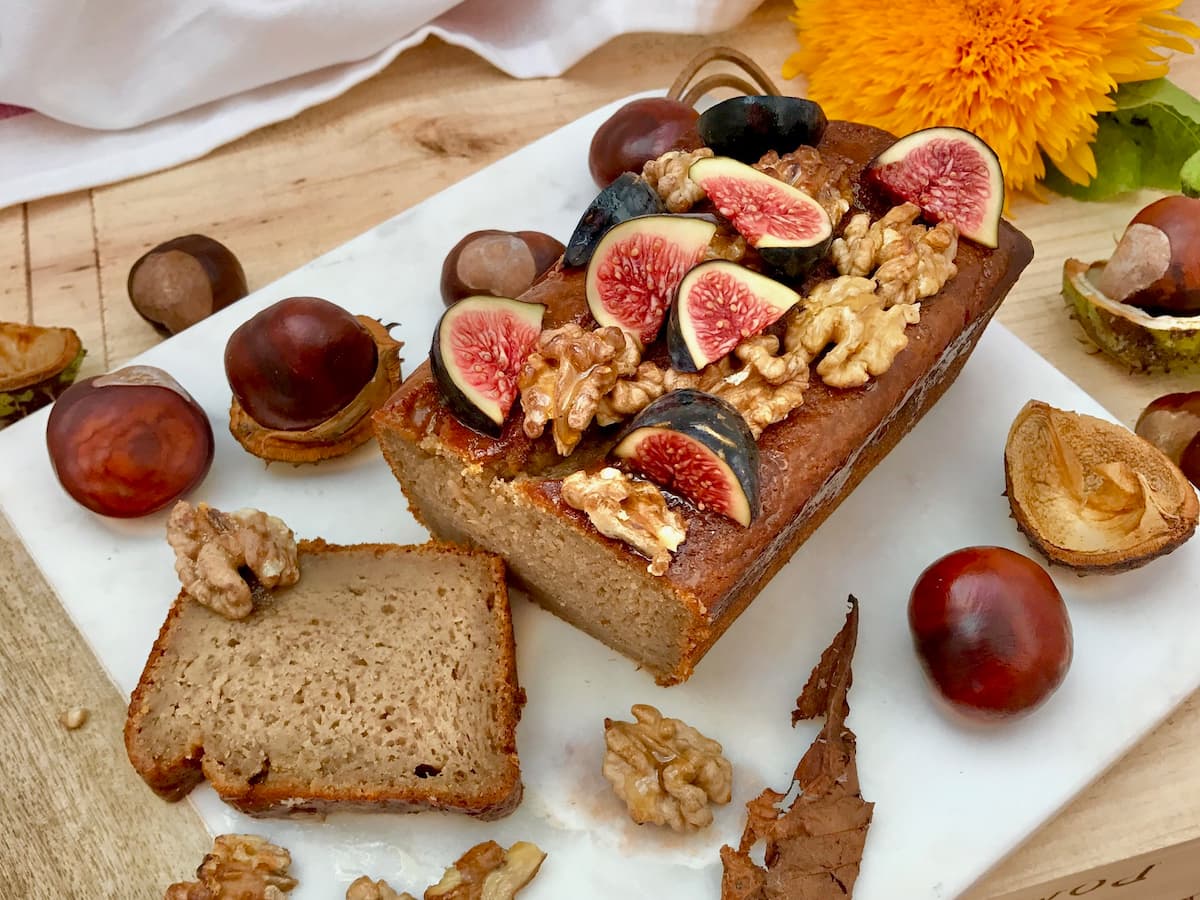 What is a Popular French Cake?

I find a French “cake” rather amusing since it can be a bit confusing.  The French call a Cake (pronounced KeK) – but it’s not a round cake as we know it like a sticky orange caramel cake, or chocolate ginger passion cake.  It’s appearance is more like a loaf in shape, as the cake is baked in a loaf tin. French cakes like chestnut cake in Corsica are popular and so merging the two with British banana bread meets together in this moist banana chestnut loaf.

If you look around the patisserie windows around Paris, you’ll see that many French pastry chefs top their cakes with fancy frills. They are topped with the likes of quartered fresh figs, walnuts, candied fruits like orange or cherries. Even the barest has a honey glaze on it. So it’s rare to see a bare, naked-topped French cake in any Parisian pâtisserie. If you do see one, tell me and I’ll eat my cake!

As a result, we often get mixed up between banana bread, banana cake and banana loaf. I’m calling it a loaf but perhaps I should say cake, like the French? Does it really matter? Just try it and you’ll decide for yourself. 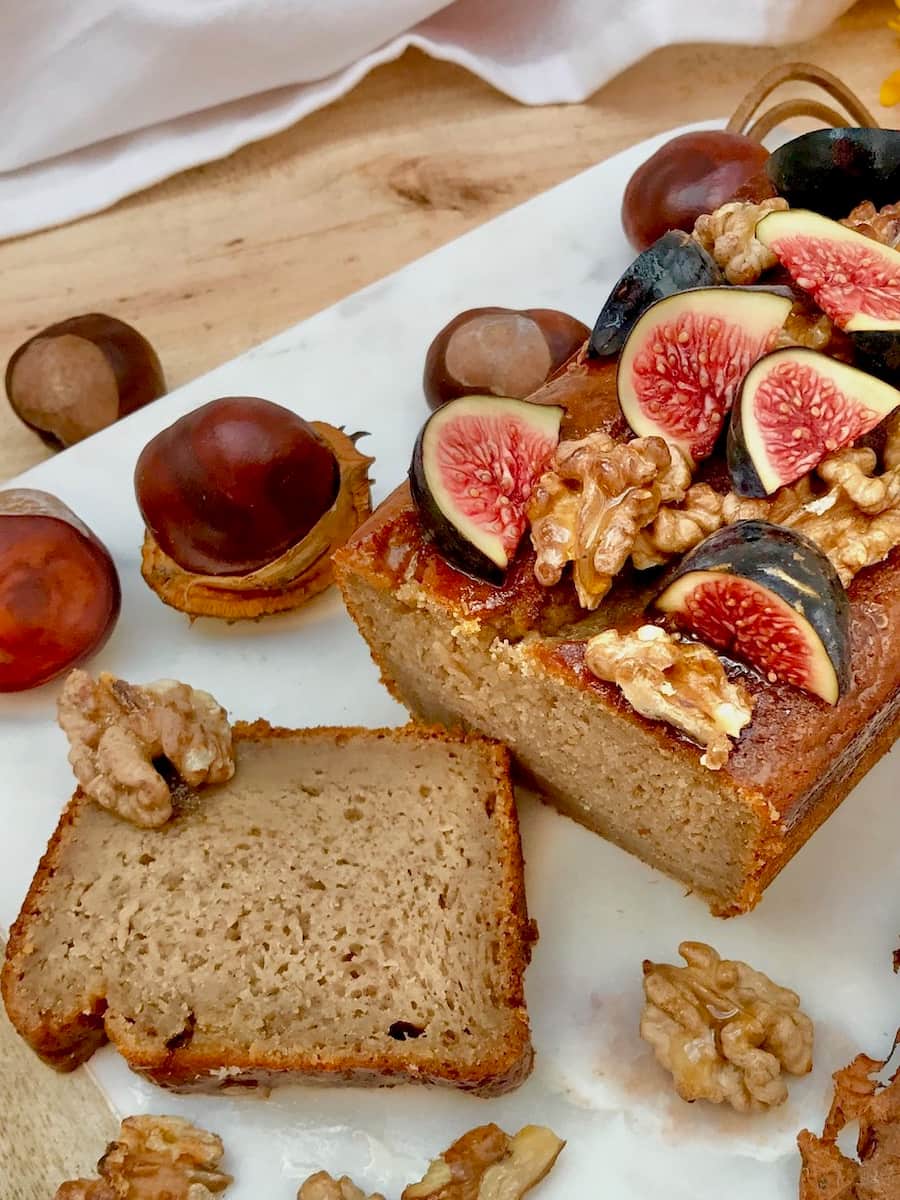 Super moist and reduced in sugar, this is our healthy version of Banana bread with nuts. Made with chestnut flour and topped with walnuts which toast in the oven while baking. Decorate with a brushing of melted honey or apricot jam, even more walnuts, figs or dried apricots. 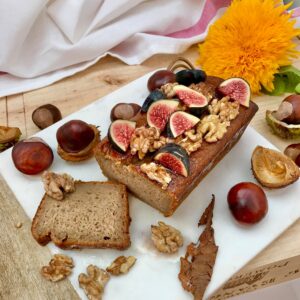 Top with either more banana slices, fresh figs or other seasonal fruits for decoration.
Delicious served warmed with a scraping of butter or chestnut spread.

This recipe was first published 21 October 2017 but is now updated with a recipe card and updated text/photos.

We’re falling for Autumn mushrooms, walnuts, pears, apples, chestnut pumpkins – each of them have their own market page – with seasonal recipes, historical, healthy facts and fun slang French sayings using them.

Come inside my local French bakery and see how they make coconut macaroons! Why are they pyramid shaped and what’s the difference with macarons? Get my easy egg white recipe too.