Instead, discover the look and taste of the ones we find in French bakeries. Video below. 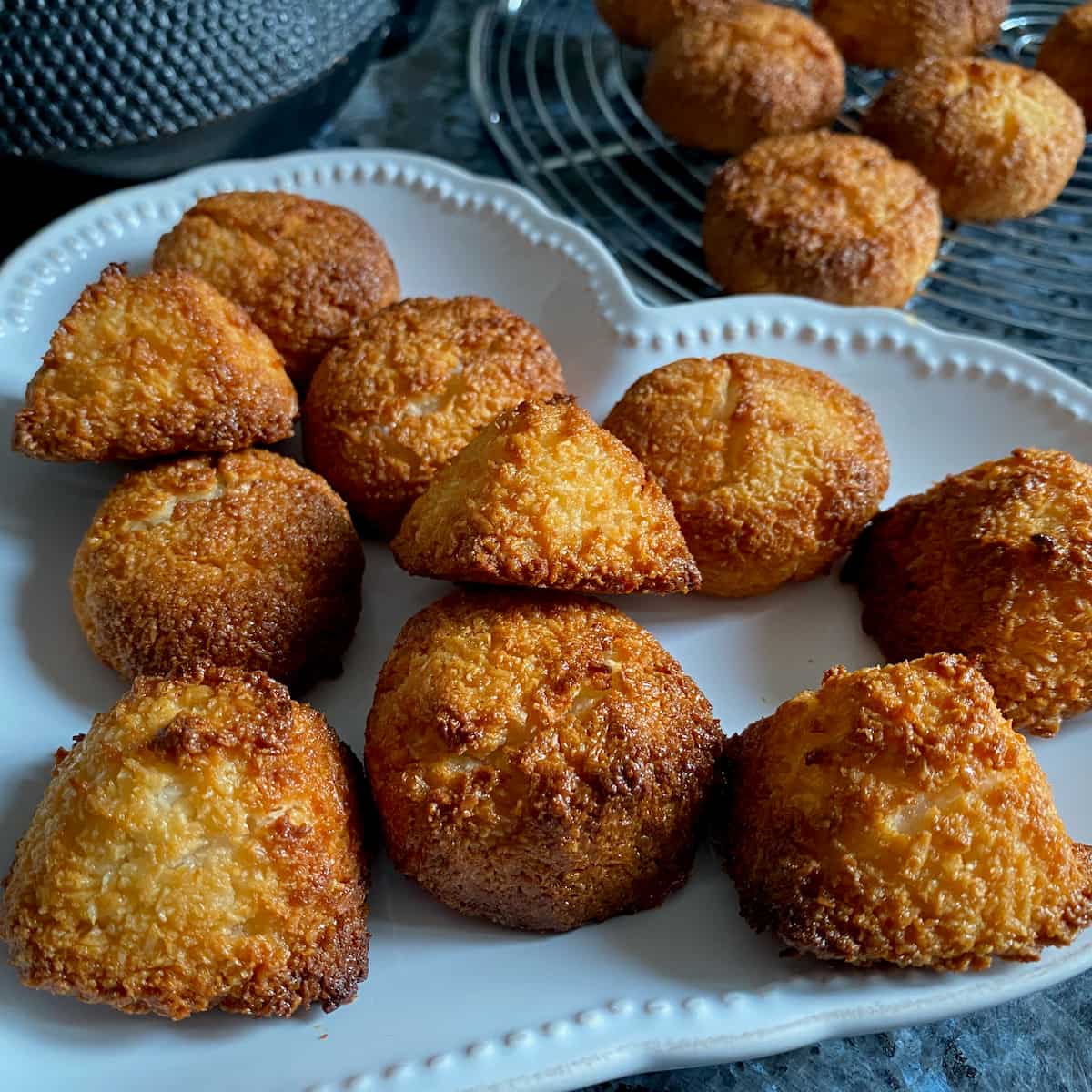 What’s the Difference Between Macarons and Coconut Macaroons?

Coconut macaroons often get confused with macarons and so this question is one I am asked often!
As author of two macaron recipe books, I already talk about this subject extensively in my article, macarons vs macaroons – what’s the difference?

Basically, coconut macaroons are made with 3 ingredients: egg whites, sugar and coconut.
Conversely, Parisian macarons are made with egg whites, sugar and almond flour/ground almonds. I precise ‘Parisian’ as French macarons have many old-fashioned traditional varieties. The Parisian – or Gerbet variety – has the classic ruffled pied or foot to easily distinguish them from the others. Again, I mention this in detail in my above article.

The ‘o’ and the ‘oo’ often get lost in translation from French to English. One thing that they have in common, however, is that they are both gluten free, as wheat flour is not used in either classic version.

However, just to confuse the saga further, since 1996 in Alsace a bakery makes Le Macaron Coco, or Kokosmàkrenele. It’s basically a coconut macaroon or rocher coco made with cane sugar and coconut, piped into a star shape but called le Macaron de Riquewihr. They also make the ruffled sandwiched Parisian version, calling them Macarons Fins. 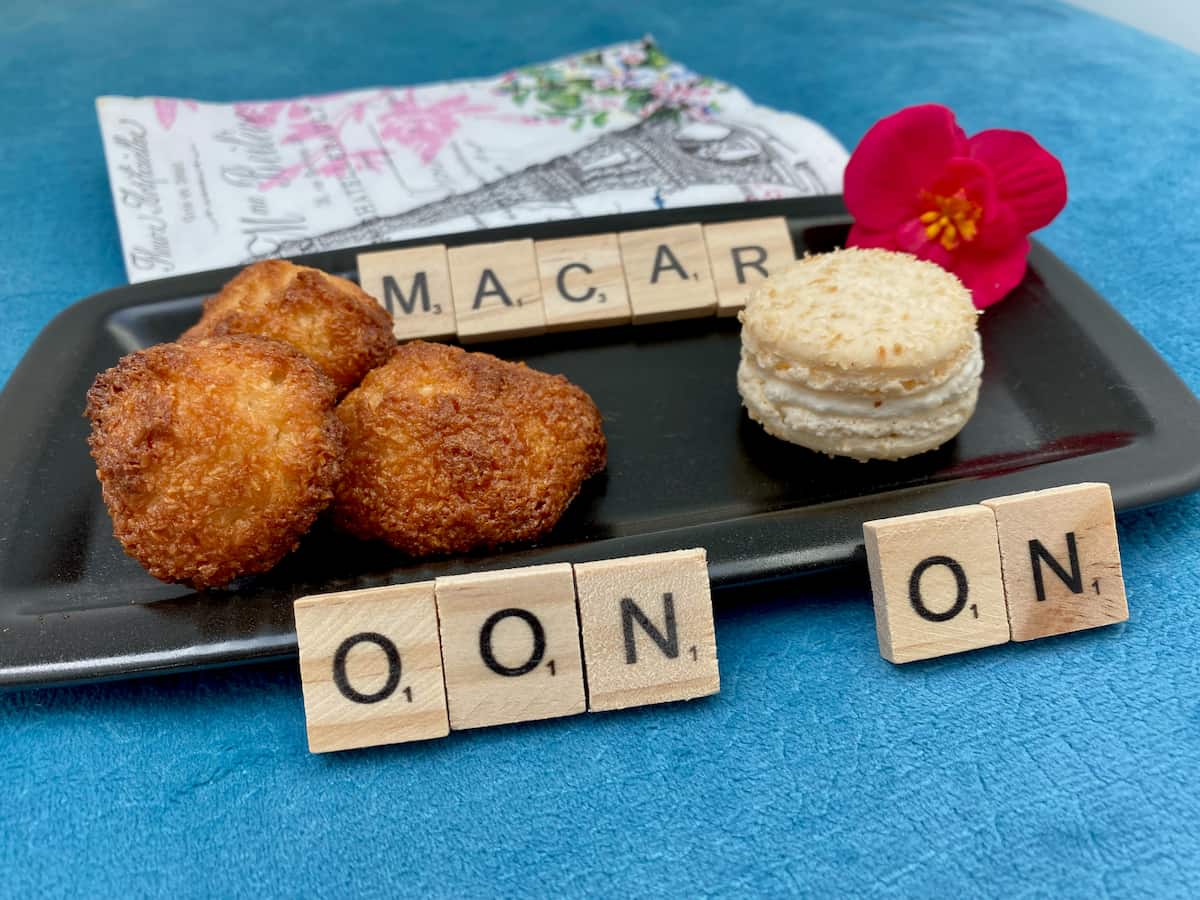 What are They called in French?

Ask for a coconut macaroon in any bakery in France and they’ll think you’re asking for a Parisian macaron. Just watch the reaction on video, when I visit a typical French chocolate shop!

Instead, they are known as Rochers Coco (or Rochers à la Noix de Coco) in French.  Previously they were known in France as Congolais, but this is no longer continued or acknowledged for obvious reasons.

Why the name, Rochers and why are they mostly in the shape of a pyramid? Rocher means rock in French and their pyramid shape resembles little rocks. 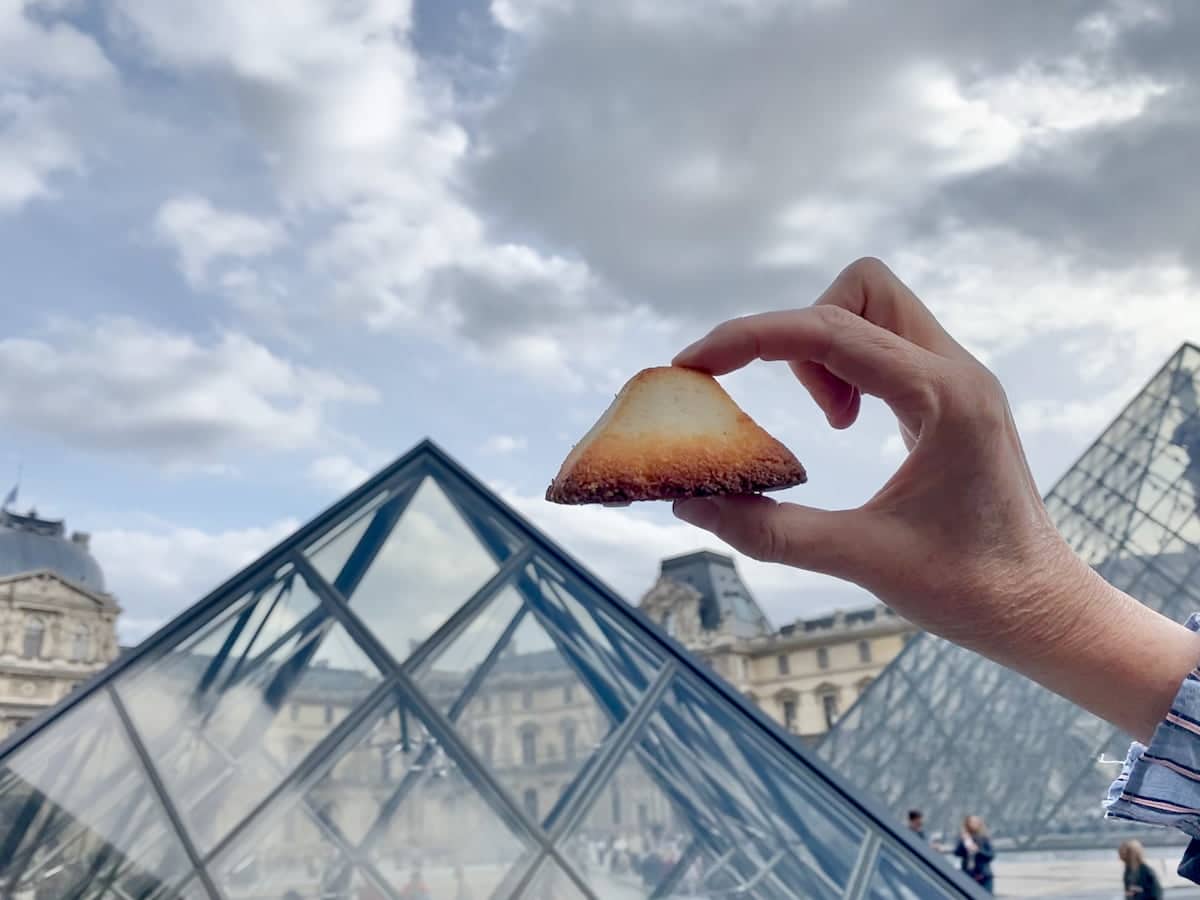 What are Coconut Macaroons Made Of?

In France, coconut macaroons are made with just unsweetened shredded or desiccated coconut, sugar and egg whites.

French pastry chefs add a 4th ingredient: a little apple compote (or apricot) for the pectin to absorb the moisture from the coconut. Instead I use a little runny (Acacia) honey, since it also absorbs moisture in baking. This helps to keep your macaroons moist.
(To discover if yours is real honey, try the quick experiment I explain in my recipe for pork in honey sauce.)

There’s no need to add any more ingredients. Especially as coconut is naturally sweet, there’s no sweetened coconut, vanilla, or sweetened condensed milk added. Add a pinch of salt (fleur de sel, Maldon or Celtic salt) but this is up to you.

The recipe below is based on the one in my 2nd recipe book,
Teatime in Paris: A Walk Through Easy French Pâtisserie Recipes. 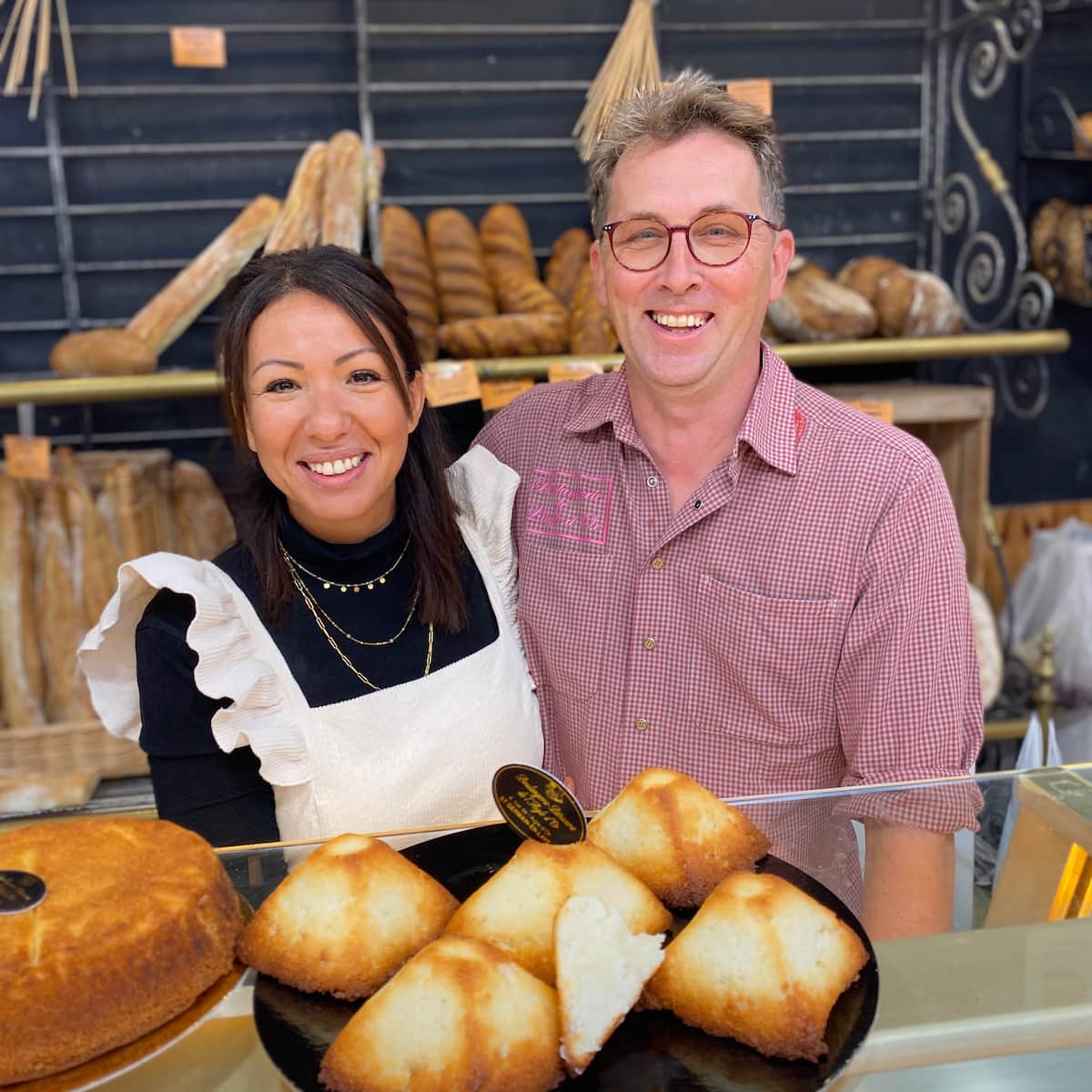 Huge thanks to Laurent Ehmig and his wife, Hanane for showing us how to make French Rochers Coco at la Boulangerie d’Aigle d’Or in Saint-Germain-en-Laye

How Rochers Coco are Made in France

With huge thanks to Laurent Ehmig at the Boulangerie d’Aigle d’Or in Saint-Germain-en-Laye. He took time to explain how he makes his Rochers Coco:

Instead, my recipe is a lazy homemade version without the overnight setting time. However, if you have time, leave the mixture to rest longer. Instead of apple compote I use honey, which also absorbs moisture: 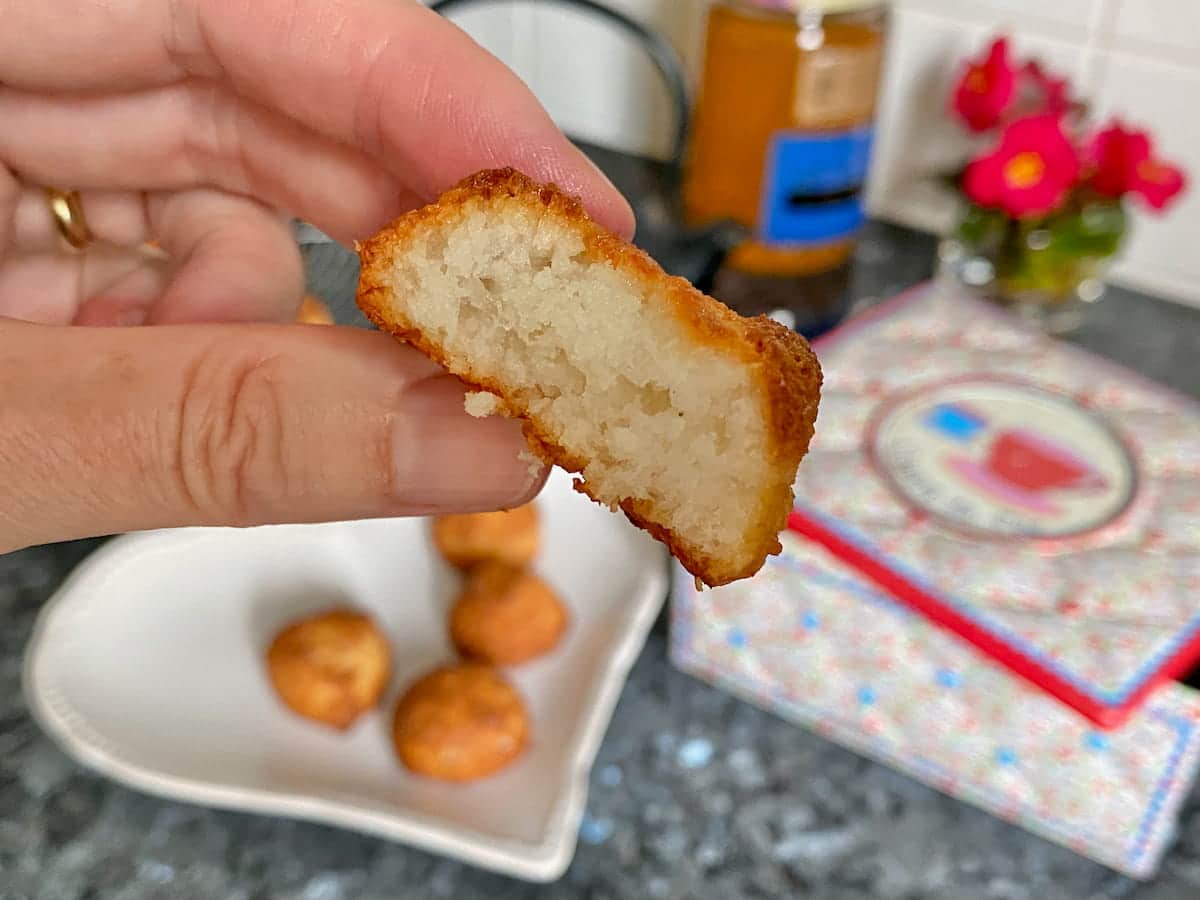 Are Coconut Macaroons Chewy or Crunchy?

Like macarons, they are neither chewy or crunchy as such.

As you can guess, the taste is strong in coconut but the first macaroon flavour to hit is the toasted coconut thanks to a slightly crispy exterior. I like mine particularly well toasted, but if you prefer yours lighter, then bake for a few minutes less (keep your eye on them in the oven). The result should still be shiny golden. If you keep them for a few days, however, the exterior crispiness gradually disappears but they remain soft inside.

The inside is deliciously fondant rather than chewy and slightly sweet, although not too sweet.
I like this recipe as it’s lower in sugar than many other recipes. They’re healthier than those with more sugar, sweetened coconut and are made without sweetened condensed milk. 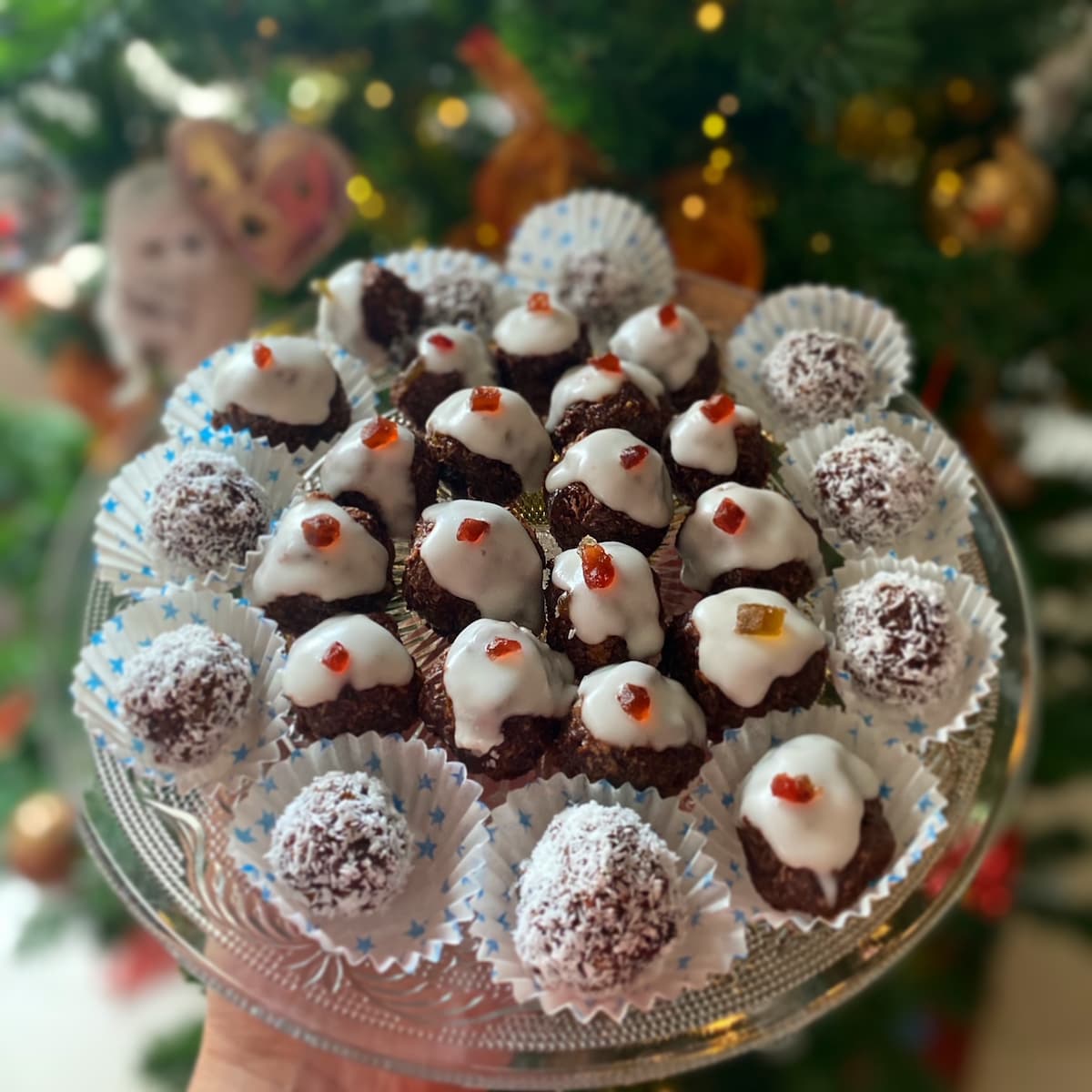 Looking for more coconut bites? Try these mini no-bake bite-sized snowballs, inspired by my Granny’s recipe, also reduced in sugar and packed with dried fruits – they’re vegan too. Dress them up like little Christmas puddings for the festive season or roll them in more coconut. 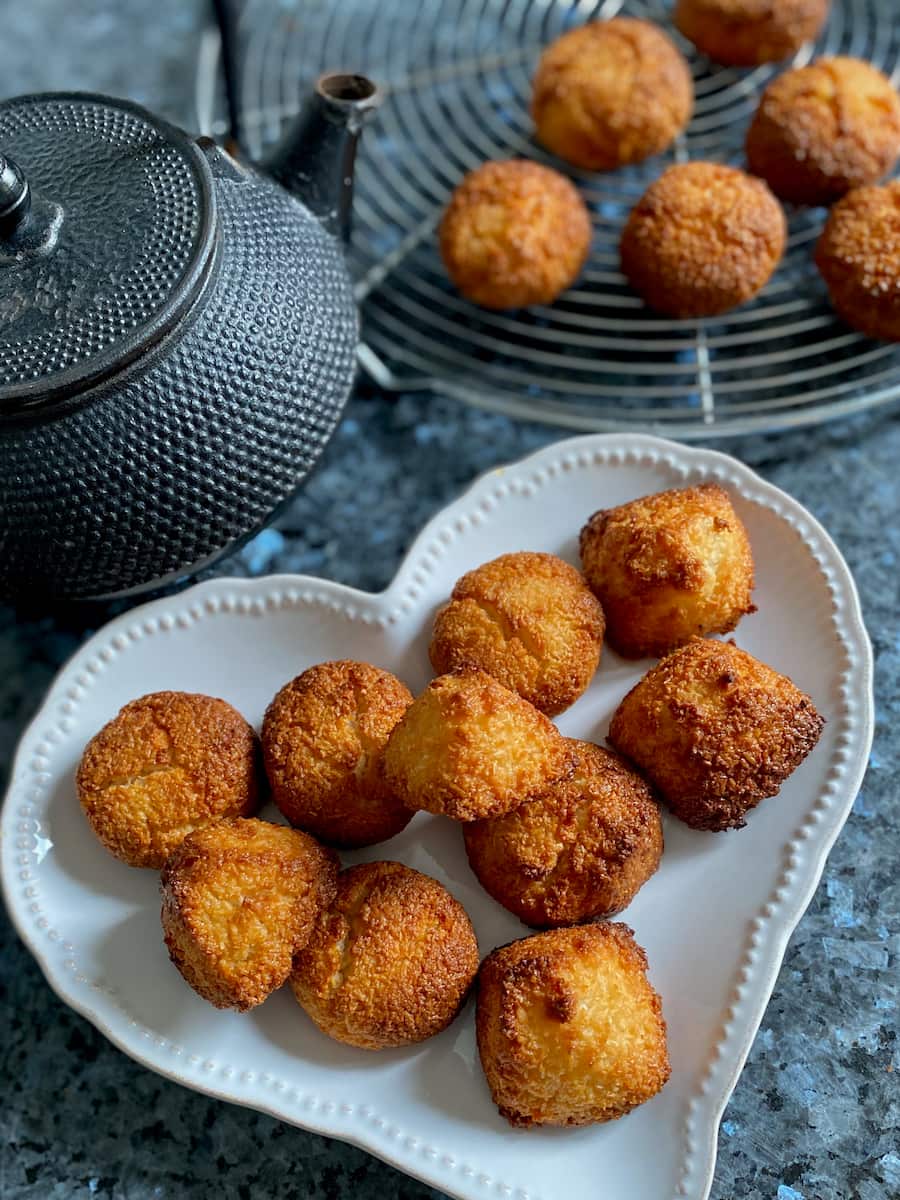 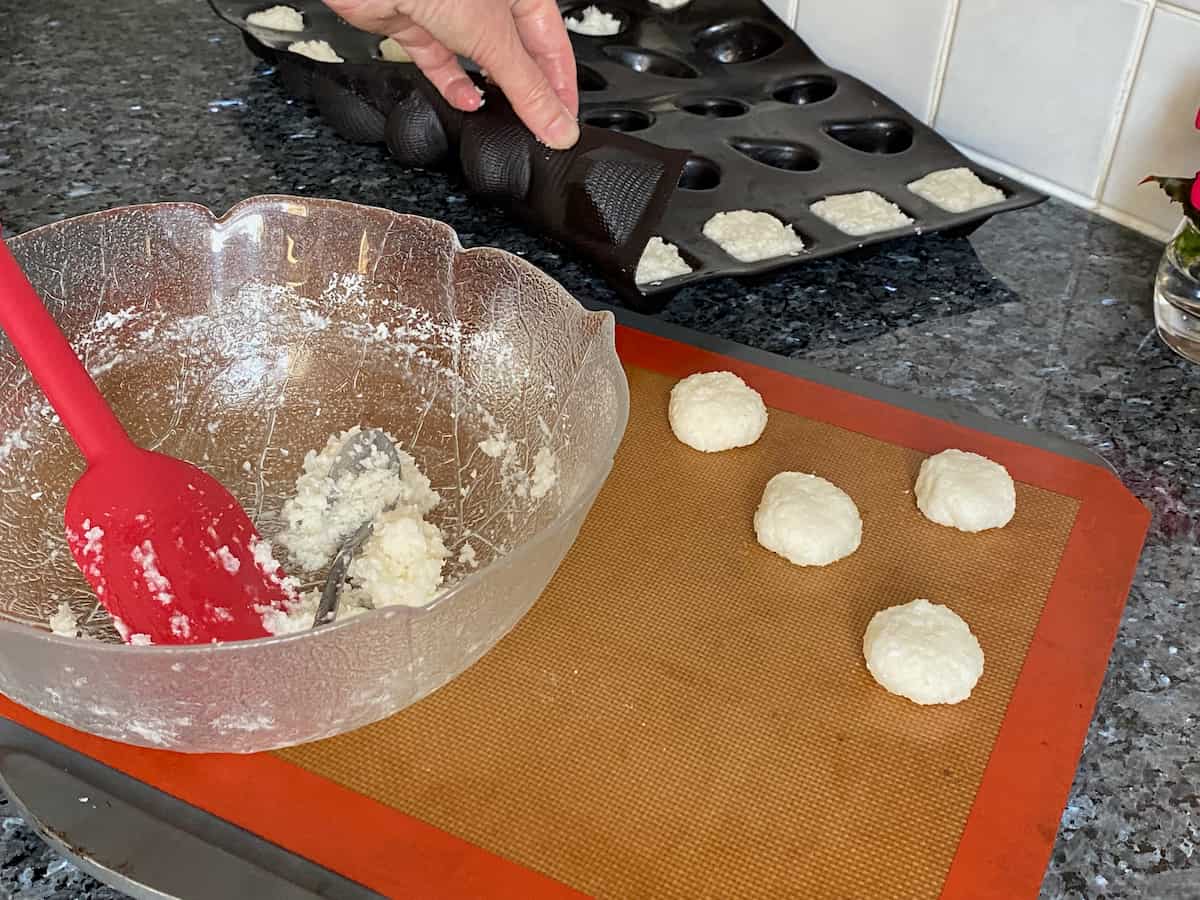 What Can I Make With the Leftover 2 Egg Yolks?

As egg whites can last for about 5 days in the fridge (and freeze well), make the egg yolk recipes in advance. Use both yolks to make Palets Bretons (salted butter biscuits from Brittany), French rice pudding, savoury lemon sauce or Crème Dubarry (cauliflower cream soup) before making these macaroons.

How Long do They Last? 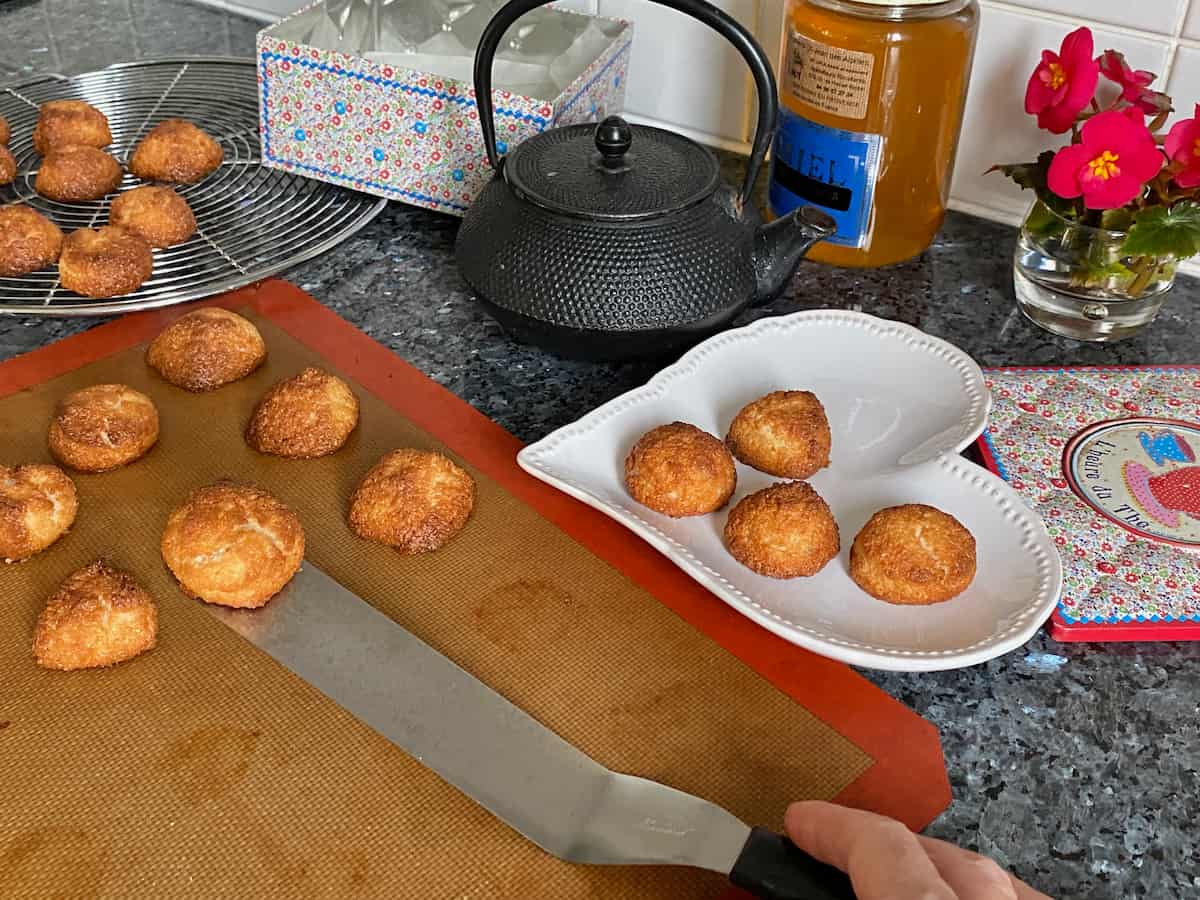 Coming soon! My video how to make them from our local French bakery and in my kitchen. 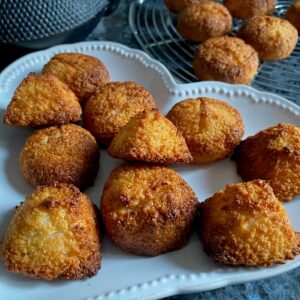 French style coconut macaroons made with unsweetened coconut, sugar, egg whites, honey and salt. Either made in mounds or pyramid shaped like in France.(Not to be confused with Parisian macarons which are made with ground almonds and are sandwiched together with 2 ruffled shells.)

YIELD: Makes 15-20 small macaroons. 146 calories based on 3 per person. (Gluten Free) Baking: I like my coconut macaroons well toasted but if you like them less browned on the outside, then reduce the baking time. Storage: best eaten on the day but can be stored in an airtight metallic container in a cool, dry place for 3-5 days. Can be frozen for up to a month. Variation with Chocolate: Also excellent dipped or decorated in dark (bittersweet) chocolate. Melt 75g (3oz) of good quality dark cooking chocolate (64%) in a water bath (bain-marie, which is a bowl over a saucepan of a little simmering water) then dip the cooled macaroons in it (easier to set if macaroons are chilled in the fridge for about 20 minutes). Measures: Please note that all my recipes are best made using digital kitchen scales in precise metric grams. Both ounces (and cups) are given as a guide.

This recipe was first published in my 2nd recipe book, Teatime in Paris in May 2015.

Autumn is falling for French mushrooms, walnuts, pears, apples, chestnut pumpkins and clementine oranges – get their recipes, historical, healthy facts and fun slang French sayings using them.
Did you know that purple carrots have been around far longer than orange carrots?