Sticky Toffee Apple Pudding, a lush comfort-food dessert with apple to the classic dates. It freezes well too, making it a handy recipe to make in advance for last-minute dinner parties. 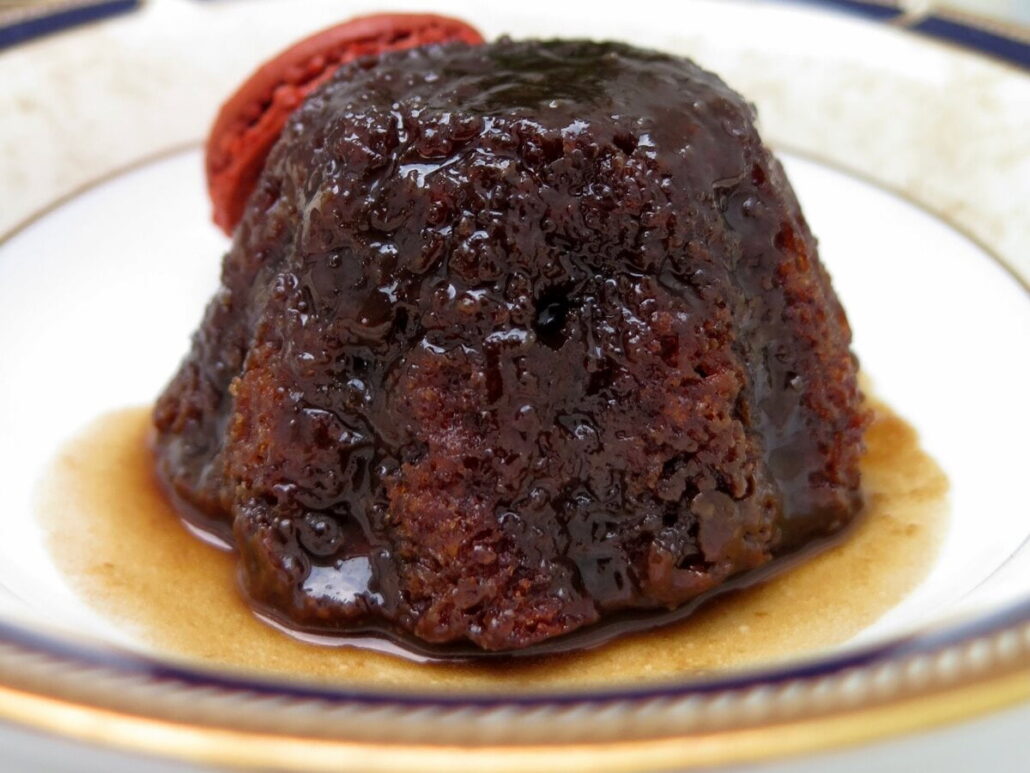 Known affectionately in our family as S.T.P.: Sticky Toffee Pudding. I make this, however, with an added grated apple, giving it a twist to the classic. Here’s a Sticky Toffee Apple Pudding – adding a little extra fruit to the decadent luscious toffee scrumptiousness!

This pudding goes against my French-style eating habits: I love dessert but shy away from over-sugared and filling puddings.  This is our exception – and the version below is my final answer to this most delicious dilemma called Sticky Toffee Pudding Syndrome.

Another reason? I already have a version of it in my first cookbook. For some fun, I converted the Sticky Toffee Pudding into a macaron for Mad About Macarons – making it an entirely gluten-free version.  I also made them into a giant macaron dessert for the book’s macaron dessert chapter, a kind of Xtra Large S.T.P. macaron!

Funnily enough, some American critics initially thought that S.T.P. was a “bit too British” for a macaron book – but little did they know that the recipe for sticky toffee pudding may well have originated in Canada, just like my Scottish Granny’s Matrimonial Cake (oaty date squares).

Growing up with STP, my parents would often drive my wee brother and I down to the Lake District. It didn’t take us long to discover THE highlight of any of our trips there: we’d make a mandatory stop at the legendary Cartmel Village Shop for a S.T.P. dose from their “Home of Sticky Toffee”.
I distinctly remember the difference over many other sticky toffee puddings we tried in Scotland: it was distinctly dark and lush, covered in the darkest ever toffee sauce.

Living in France has meant the necessity of making this at home, as it’s not something we can just run out to our local pâtisserie or boulangerie and find – so this Sticky Toffee Apple Pudding was created along the way. It’s often requested by my beau-père, Jean-Pierre, who’s accent is adorable: can we have more of that steeecky toa-fee pood-eeeng?

Well, here it is, beau-papa.

There are two ways of making this recipe.

Normally it’s made as a flat cake, batter sitting (nearly floating) on top of a pool of toffee sauce in a buttered ovenproof pie or gratin dish and serve spooned into pudding bowls or – in this case – teacups, inspired by Carina Contini’s family recipe for Sticky Ginger & Date Pudding in her Kitchen Garden Cookbook.

I adapted the recipe, cutting down slightly on the butter and sugar, plus I added a grated apple, since my Granny always mixed dates with apple – it’s a deliciously nostalgic thing I can’t help continuing. Then by adding 2 tablespoons of dark rum to the sticky toffee pudding sauce it just made it extra heavenly for those cold, dark nights.

You could call this version a Tipsy Sticky Toffee Apple Pudding! 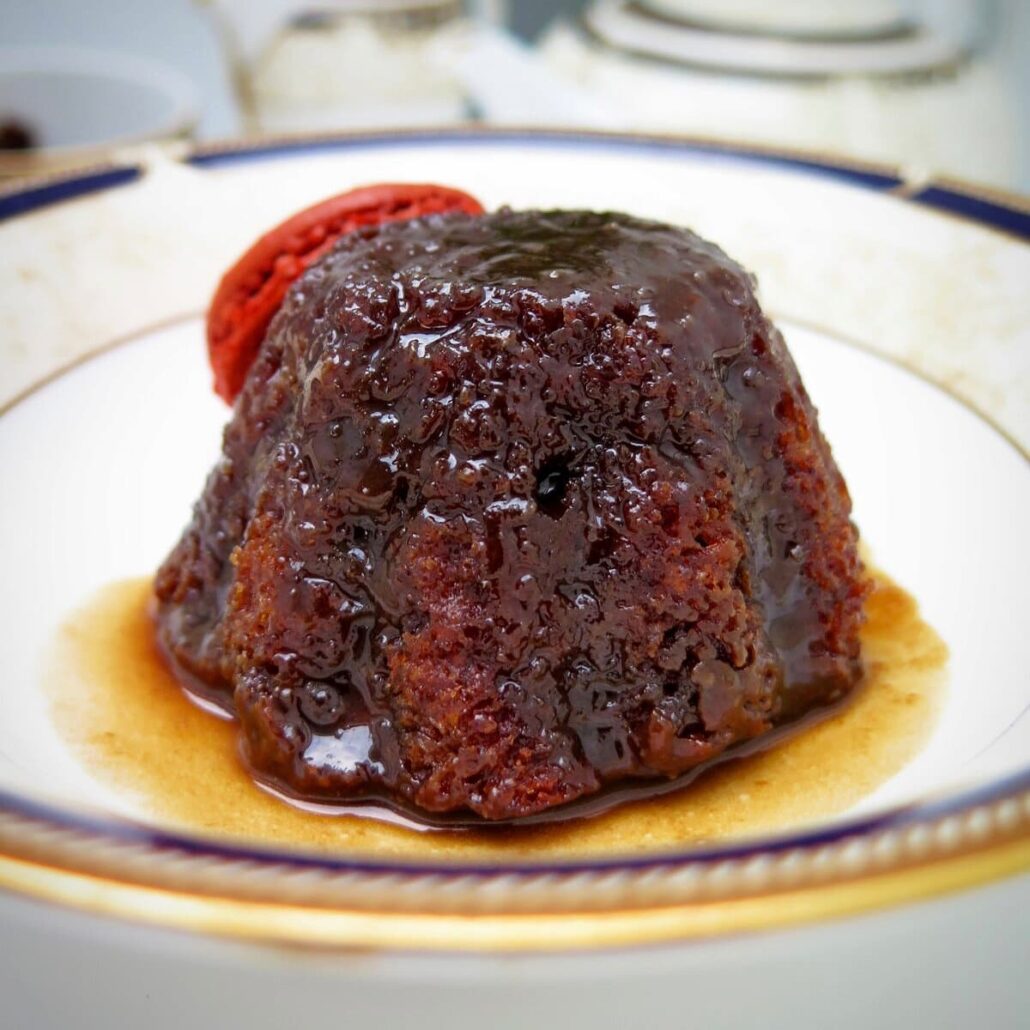 However, the above family-sized flat cake version has one HUGE problem: we normally have at least second portions and it can get out of control. It’s what we call the Sticky Toffee Pudding Syndrome. So, to avoid such sticky toffee impulses, my preferred method is to pour the batter into individual silicone moulds. It’s just enough. Full. Stop.

Moreover, they’re so easy to freeze when removed from their silicone moulds and reheat when needed – making them so handy to serve stress-free for a dinner party later!

We eat half and freeze the rest before anyone can ask for more.

No second portions – unless you want a sticky toffee pudding macaron?

How to Make Sticky Toffee Apple Pudding From Scratch

Firstly, make the sticky toffee sauce: you’ll need this not just for pouring when it’s served, but also for pouring underneath the batter to make the cakes beautifully sticky.

In order to get the best, dark sauce, use soft dark muscovado sugar. If you can’t find this in speciality épiceries in France, then use Vergeoise Brun.

Prepare the date paste adding water, bicarbonate of soda and grate in a peeled apple. Make the batter and fold in the date and apple mixture.

Pour in the toffee sauce to about 1/4 of the way then top with the batter, leaving 1/3 space at the top for the cake batter to rise. Bake for about 30 minutes and serve with the toffee sauce. That’s it! 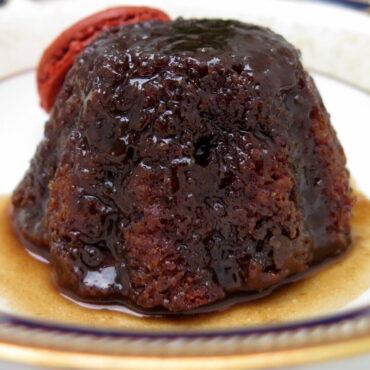 An apple addition to the lush Sticky Toffee Pudding classic recipe, served individually in a pool of the darkest toffee sauce. The puddings and sauce also freeze extremely well. Just reheat them separately and serve when you need a dose of Sticky Toffee Apple Pudding! I use briochette or muffin silicone moulds, but traditional buttered dariole moulds are also good.

The puddings and sauce freeze well. Once the puddings are cooled, chill then transfer to a zip-lock bag or containers - likewise for the sauce.  Just defrost and reheat before serving.
Share this recipe

Hi Jill! I will try this recipe, as I have been experimenting on STP and this will be my fourth attempt. Will the muscovado make the sauce this dark?

It certainly will. Let me know how you get on. Excited you’re making it – we love it!

Oh Jill I’m a true lover of STP. I cannot wait to add the apples! Well done…my pudding is already very moist so hopefully it won’t be too much ..thank you my dear friend. I can always depend on you to take from delicious to absolutely addictive.

You’re so sweet – thanks, Bea. One word, though. If adding apples and your recipe is already moist, then I suggest using this recipe, as I’ve tweeked the quantities to compensate for still a moist pudding but keeping the balance right. You’re right – this STP heaven is rather addictive. Guess you have the syndrome too!

You know I have STP syndrome, but this looks like STP on steroids! WOWEE! I’ve never baked individual cakes, and I’ve also never put some sauce in before the batter! YUM! I seriously need to make this, but then again, it could be quite dangerous! UGH!

Dangerous is the word with this one – that’s why I freeze the other half pretty much straight away before temptation kicks in for a second one! STP on steroids … love it!

Looking for your ideal teatime address in Paris? Then check out my favourite Parisian tea salons nearest you.

Join me for a virtual tour of the fresh fruit and vegetables at our local market. We’ll discuss recipes and random facts, including fun French expressions using many of them.

Want to eat like the French? My daughter, Julie gives us her 5 tips how she continues to enjoy a French lifestyle in London.