Remember Brandy Snaps, the retro crispy caramel wafer-like tubes filled with light whipped cream? Give them 2 snaps and a twist with mint, lime and rum and turn them into Mojito Snaps! They’re a lot easier to make than you think. Find out how to store them, fill them and stop them from getting soft or chewy. 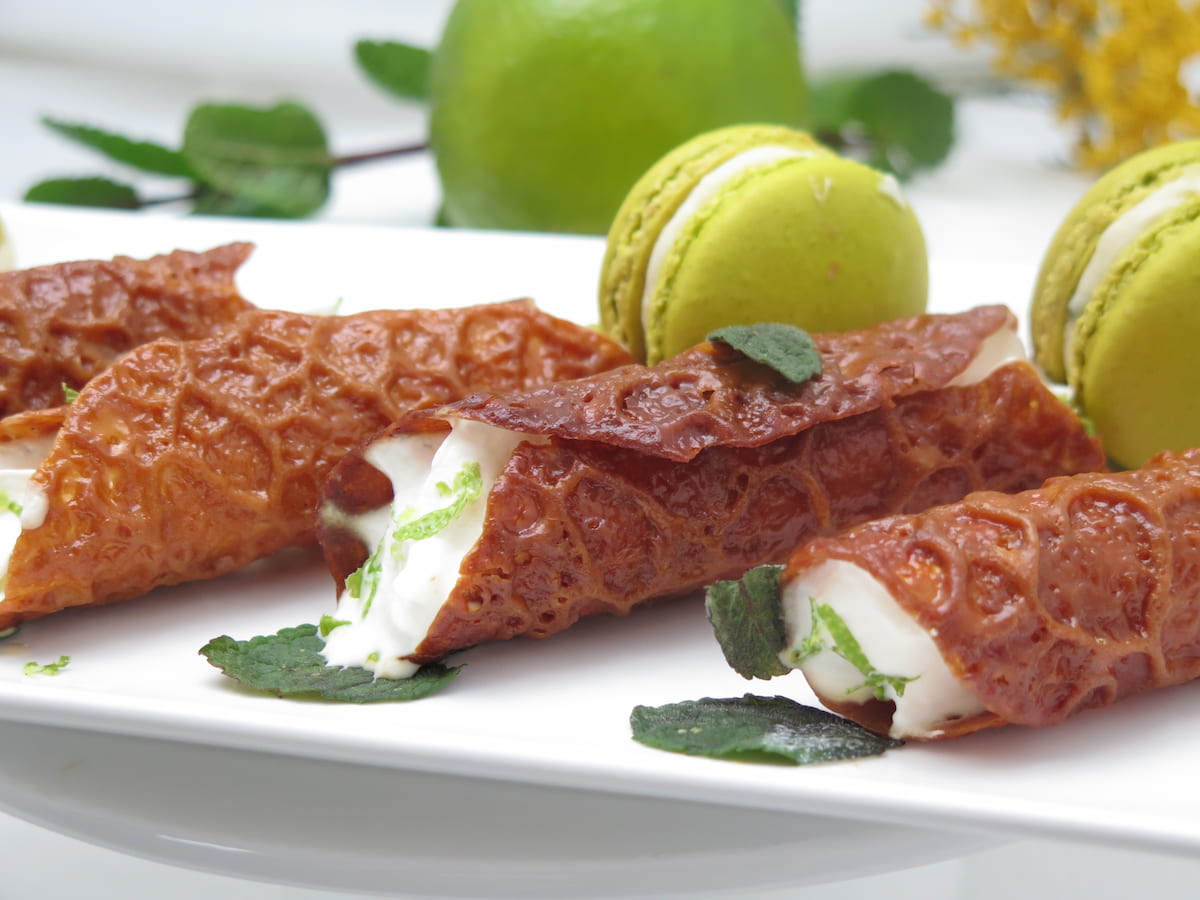 This recipe came about when I was flicking through Classic British Bakes in my old edition of the Be-Ro Flour Home Recipes.  I stopped at what they called Ginger Snaps. Do you remember these?

They were more popularly known in Scotland as Brandy Snaps. When I saw the rather retro recipe, a waft of nostalgia hit, as I recalled my parents going mad for Brandy Snaps when they’d see them stacked up at one of our favourite bakeries in Edinburgh’s Stockbridge.

That taste is like slightly burnt caramel and, after experimenting with various different ingredients, the flavour must come from the golden syrup. Without it, it’s just not the same – likewise, that little hint of Brandy does make the authentic taste. They’re incredibly brittle and crispy too but the velvety cream filling is a perfect balance of textures.

Do Brandy Snaps Have Alcohol In Them?

The recipe below uses just a teaspoon of Brandy or Rum in the Brandy snap tubes. If you want them without the alcohol, I’ve experimented without and it works well too.  It’s just the flavour that isn’t quite as authentic.

Most of the alcohol is in the whipped cream filling. This, of course, is a matter of taste. In this recipe, I’ve made a Mojito variation with rum, lime and mint.

We could call them Mojito Snaps – although it doesn’t quite sound the same. However, they’re not just good but easy to make too! With the rum, they are strictly for adults only. However, the alcohol can easily be omitted and the recipe still works well. 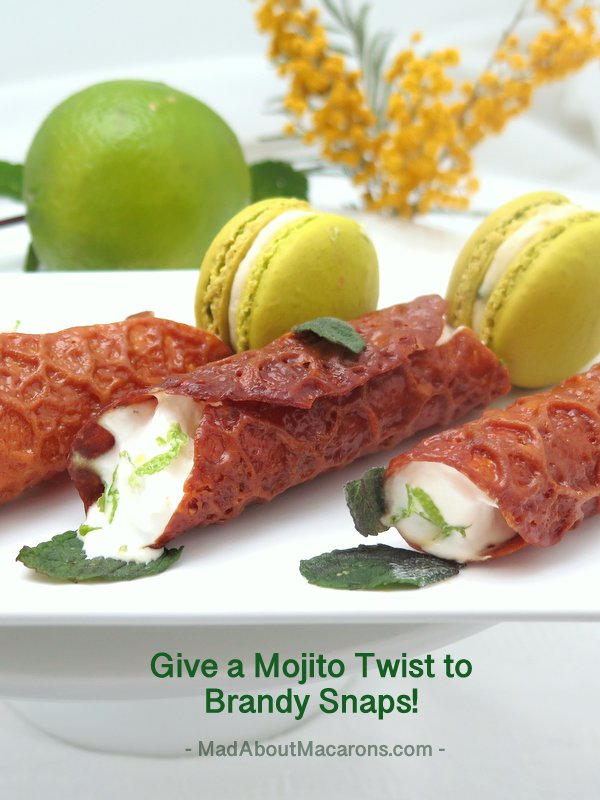 Why is it Called a Brandy Snap?

You can just imagine why they’re called snaps. They snap into the most messiest of delicious pieces, cream getting everywhere.  It just isn’t possible to eat one without it snapping into delicious little bits and leaving gorgeously messy fingers.

As for the Brandy part of its name, it’s apparently not referring to Brandy at all.  Instead, the name refers to them being branded, as in burnt, according to John Brockett’s Glossary of North Country Words (Newcastle, 1846).

These little fragile caramel rolled tubes perhaps look a bit like Cannoli in that they’re rolled and stuffed with cream. However the mixture for making the cannoli tubes isn’t at all the same.

Like Brandy snaps, cannoli tubes are also made up of butter, sugar and flour.

Conversely, cannoli tubes add Marsala, egg, cocoa powder, and a touch of vinegar. Instead, Brandy snaps add Golden Syrup, a little baking powder and a tiny amount of Brandy which is optional. 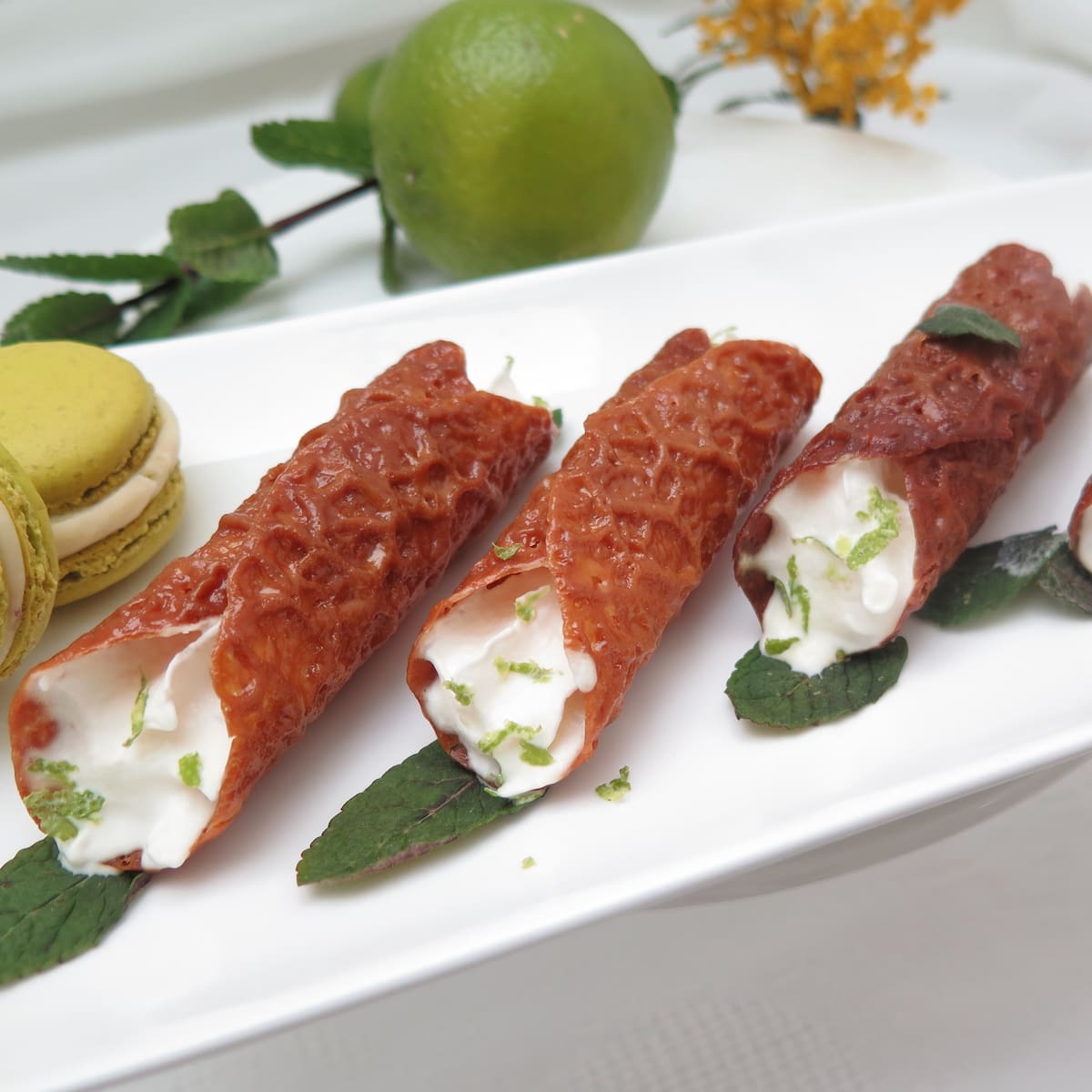 While sticking to a Mojito theme, I made a batch of Mojito macarons (one of my favourite recipes in my book, Teatime in Paris) which are particularly boozy and, like these Mojito Snaps, strictly reserved for adults only. For more, see Macaron Talk. 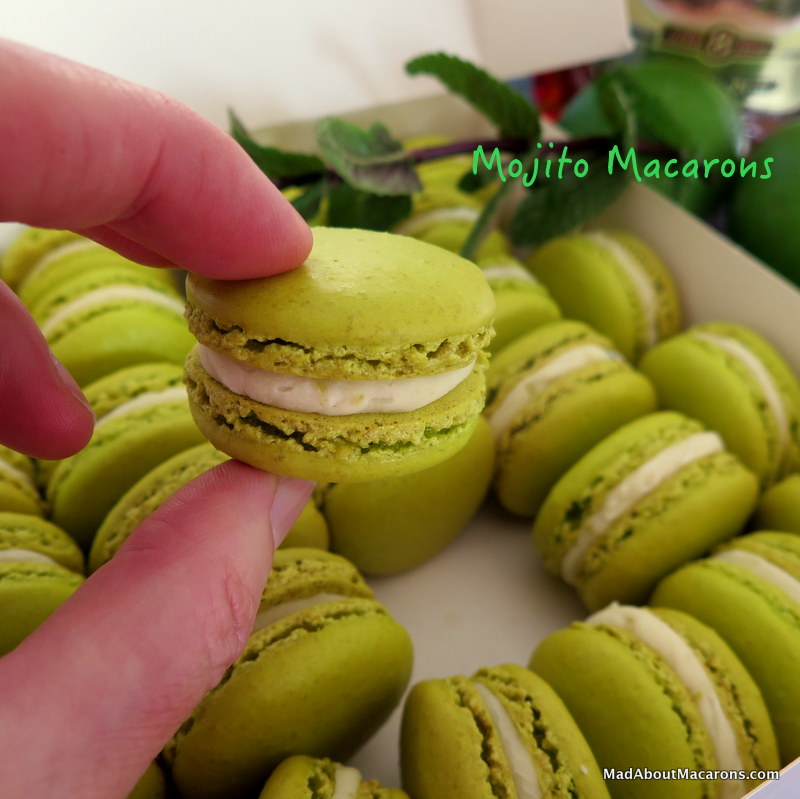 Imagine a soft whipped cream with lime zest, fresh mint and a bit of rum. It’s a Mojito twist to brandy snaps!

What Can Be Substituted for Golden Syrup?

Golden Syrup is from the UK. It’s an inverted sugar syrup and general substitutes are light corn syrup or brown rice syrup in the USA. However, both honey or maple syrup can sometimes be used as an alternative, but it depends on what kind of recipe you need it for.

So after experimenting using other syrups and honey with this recipe, the result still looks the same but the taste is nothing like what it should taste like.

As a result, I don’t recommend any substitute other than Golden Syrup if you want the genuine taste of Brandy Snaps.

How to Make Brandy Snaps – The Tubes

Why not make them for Mother’s Day or Father’s Day for a touch of nostalgia?  I get the same reaction when serving trifles – such as this Macaron Berry Trifle.

Once you’ve prepared the batter by melting the butter, flour and golden syrup then added the other ingredients, you’re ready to spoon them out. 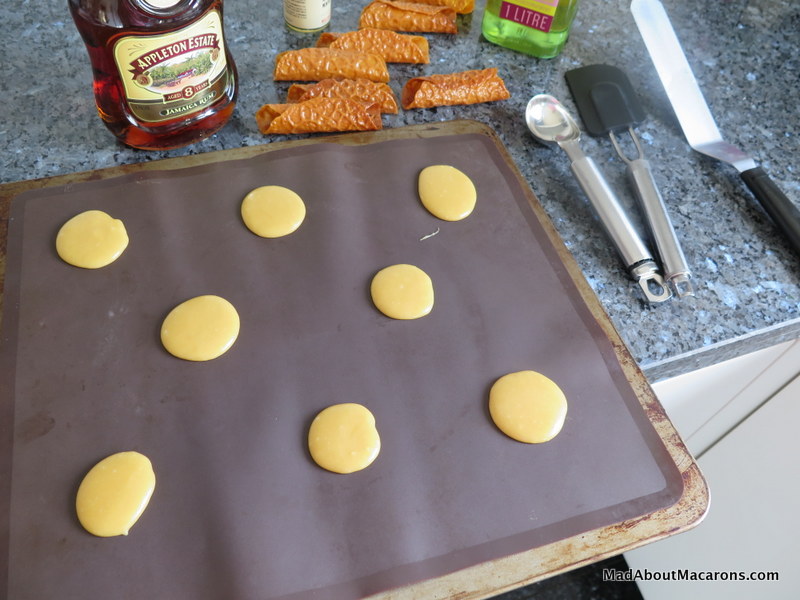 the batter will spread so keep them well apart before baking for about 8 minutes (keep your eye on them in the oven!) 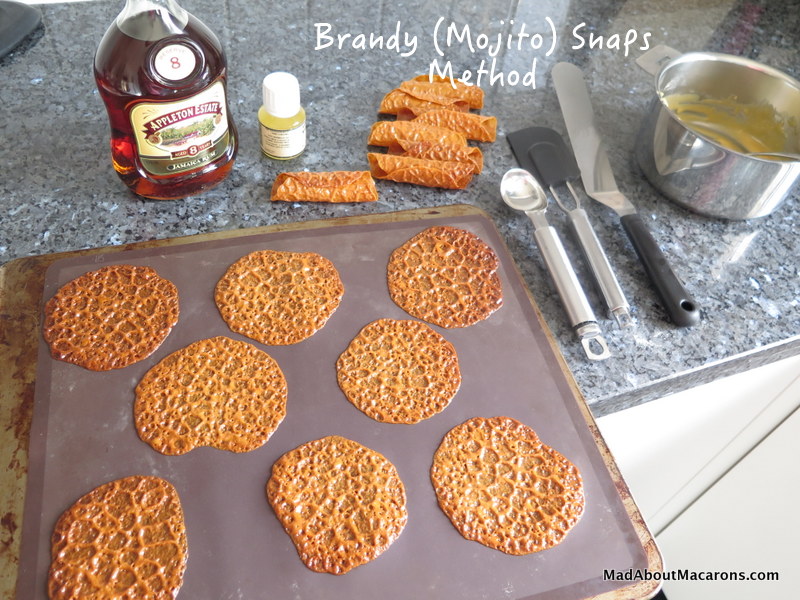 Leave them to cool SLIGHTLY 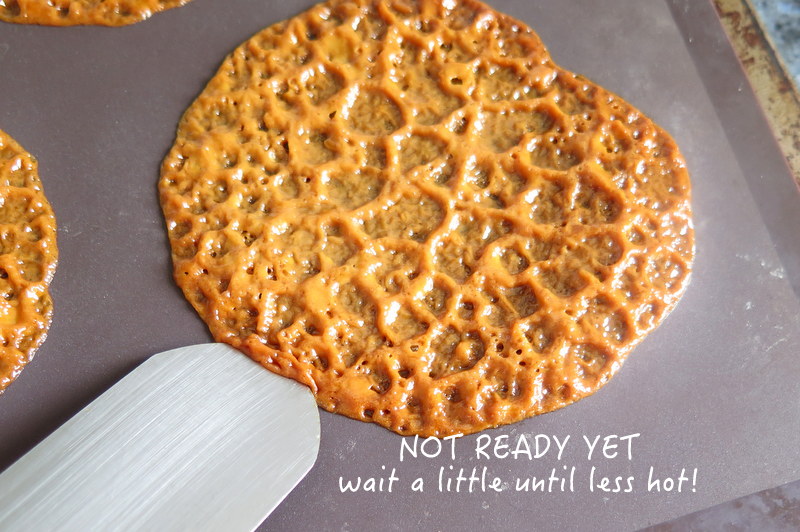 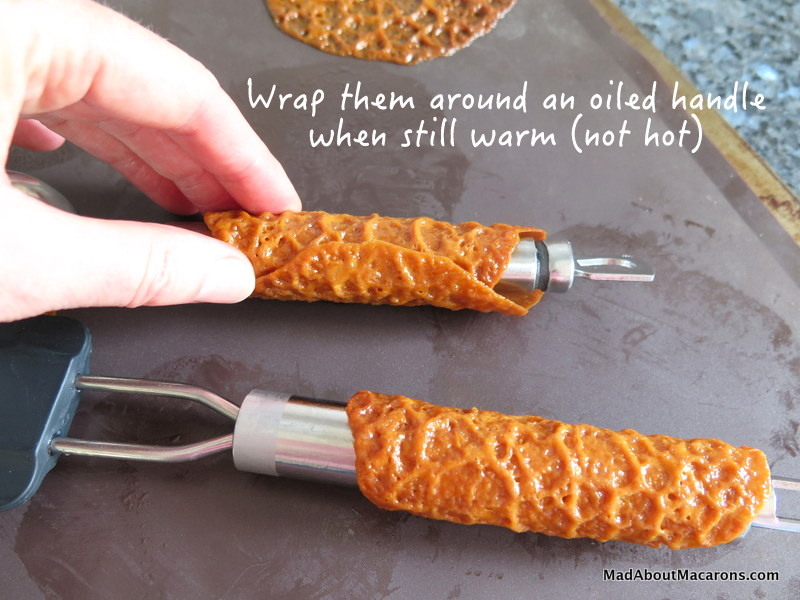 When still warm, roll them around an oiled handle directly on the warm baking tray

How to Fill Brandy Snaps

Before serving, whip up the cream in the chilled bowl using an electric whisk to firm peaks.  Add the zest, mint extract (if using) and rum and whisk together for a few more seconds.

To fill each cavity with the whipped cream, either use a small spoon (although this can be messy!) or better still, with a piping bag and plain tip. The latter makes it sound difficult, but it’s so much easier this way. Alternatively, spoon the whipped cream into a ziplock bag, seal then snip off a corner and press into the tubes.  It’s just as easy! 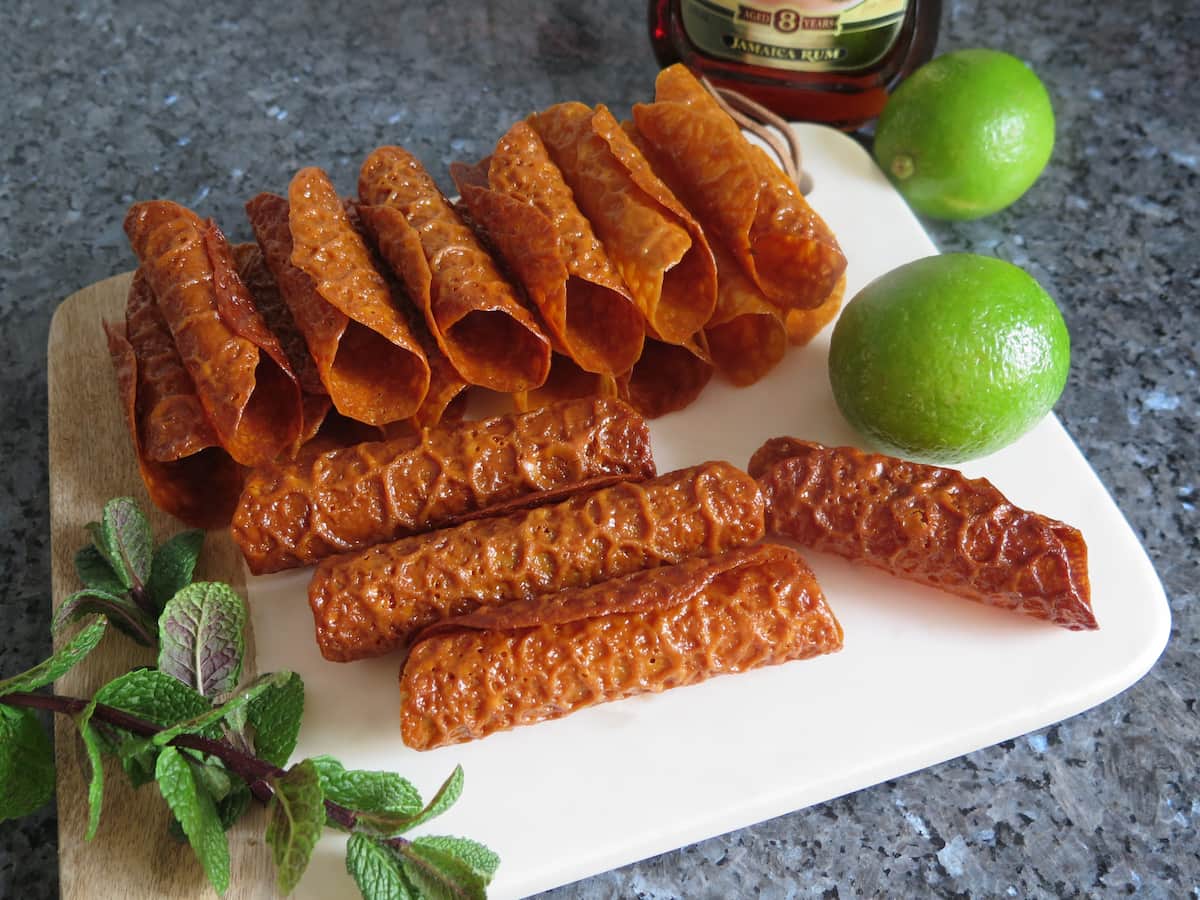 How Long Can you Keep Brandy Snaps?

These brandy snaps can easily keep for up to 3 days in an airtight container (I prefer a biscuit tin box) lined with baking parchment. That is, the tubes only can keep without any cream filling. Prepare the cream and fill them just before you plan to serve them to enjoy them at their best.

As they are brittle, handle them gently. Likewise, they can be frozen for up to a month so they’re an ideal make-ahead dessert for entertaining.

How do you Keep Brandy Snaps from Getting Soft?

They also hate humidity, so line the airtight tin with greaseproof paper to avoid them sticking together. That’s it!

The secret is to keep Brandy Snaps as little as possible out in the air. So keep them in the airtight tin until the last minute before serving, if possible. That will avoid them from becoming chewy.

Oh, and when you open up that airtight container, get these wafts of nostalgia flooding in. I often just stand with the lid open and sniff their distinctive perfume from the box. It’s my Madeleine de Proust, that nostalgic return to a delicious childhood moment via your favourite foods. Do you know what I mean? 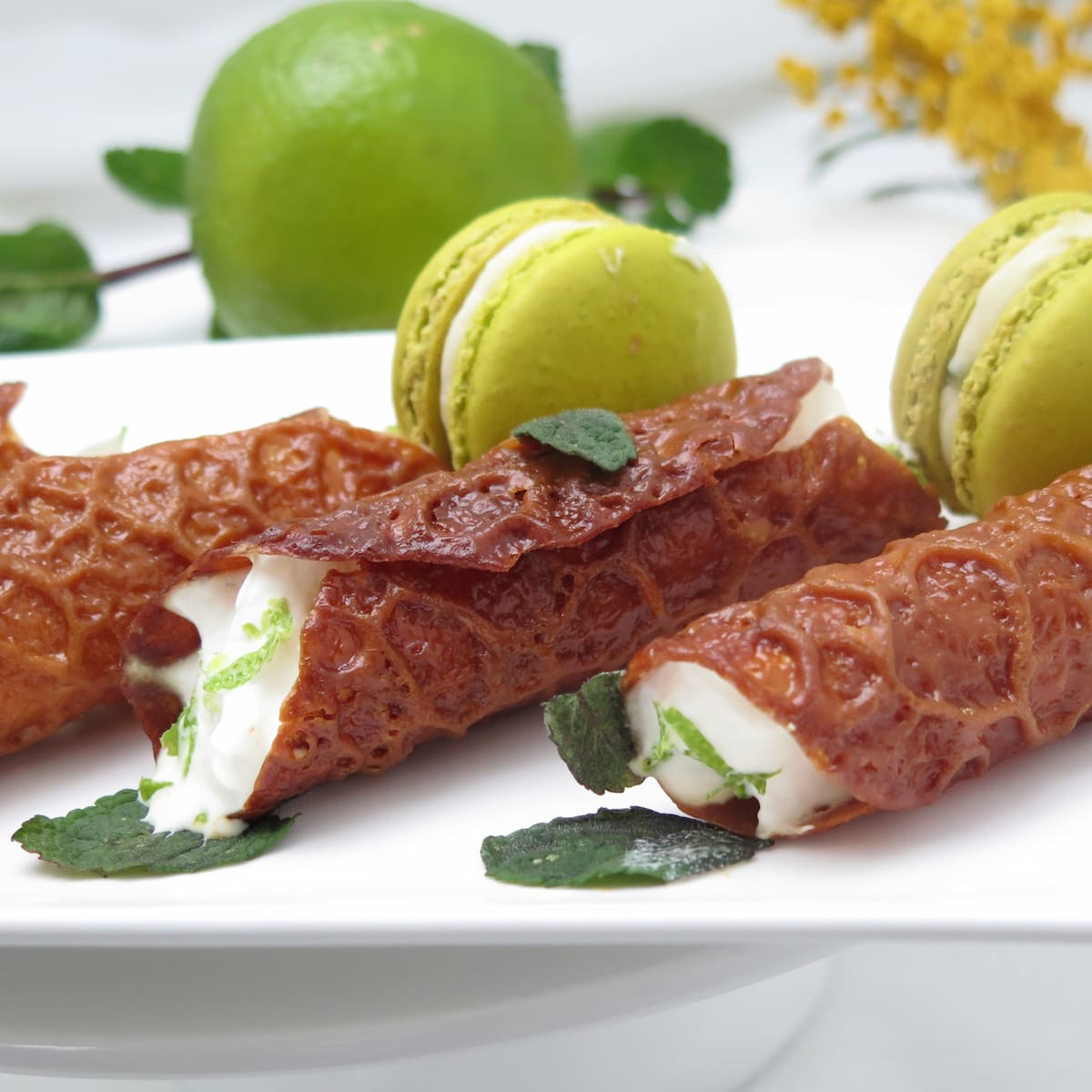 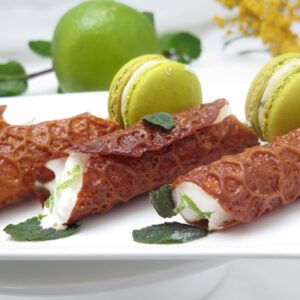 Brandy Snaps with a Mojito Filling

Retro Brandy Snaps, caramel tubes filled with whipped cream given a mint, lime and rum twist to the party to make Mojito Snaps.

To make the Brandy Snap Tubes

Brandy Snaps Without Brandy: Although I add just a teaspoon of rum or brandy in the recipe, they can be made without and the end result is still good. Golden Syrup: I've experimented using other syrups with this recipe and don't recommend any substitute other than Golden Syrup if you want the genuine taste of Brandy Snaps. Whipping Cream: If you have a siphon (which I regularly use for this kind of quick cooking and it’s handy to make whipped cream in advance), then place the cream, mint extract and rum into the siphon, close it inserting the gas canister. Shake and refrigerate until ready to serve. Fill each cavity with the cream and add the zest afterwards. The brandy snaps (without the filling) can keep for up to 3 days in an airtight container lined with greaseproof paper so that they don’t stick together and can be frozen. NUTRITIONAL INFORMATION: 220 Calories per serving of 2 Brandy Snaps.

This post was first published 15 March 2017 but is now updated with text easier to read and updated images.

I’d love to know how it turned out. Please let me know by leaving a rated review below. It means so much to have your support. On Instagram? Share a photo and tag @JillColonna and hashtag it #madaboutmacarons. À bientôt!