French potato gratin Savoyard – a classic family recipe without cream using stock, thinly sliced potatoes, onions and cheese. Either use a fruity Emmental cheese, or for something more robust use Beaufort, another famous cheese from the Savoy (Savoie) region in the Alps. 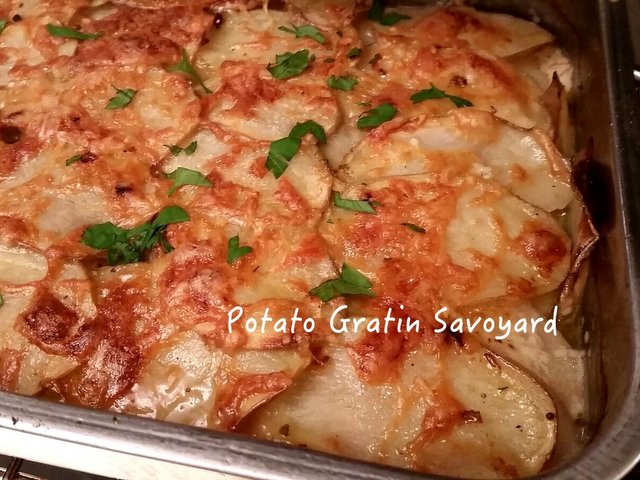 According to my Larousse Gastronomique (French culinary dictionary), a gratin is a family dish, brought to the table directly from the oven. While it’s still bubbling hot and set down ready to serve, all eyes in our household are on the top crusty layer of cheese.

It never fails to surprise me just how much Antoine and the girls fight over who gets to scrape the last pieces of crunchy remnants that stick to the dish. 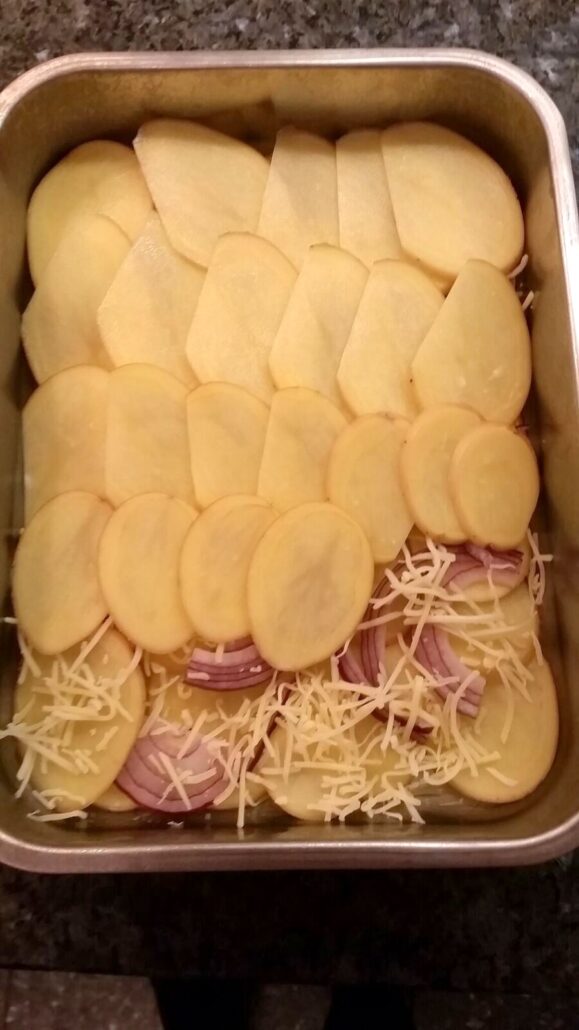 Over the years, I have been making this family favourite gratin, inspired by my now tattered and loved-to-bits French table recipe book by the Scotto sisters (edited by Gilles Pudlowski): France The Beautiful Cookbook.

It’s simply layers of extra thinly-sliced potato, interspersed lightly with grated Emmental cheese. Before whacking it in the oven, chicken (or vegetable) stock is quickly poured over it so that while baking, the gratin cooks itself in the juices without having any problems of curdling cream or, indeed, worrying about our arteries!

Is Potato Dauphinois the Same as Potato Gratin?

Not to be confused by the rich, double-creamed Gratin Dauphinois, this gratin has no cream or milk in it.  If you prefer the double creamy version, then here is my version of a French classic, Gratin Dauphinois. 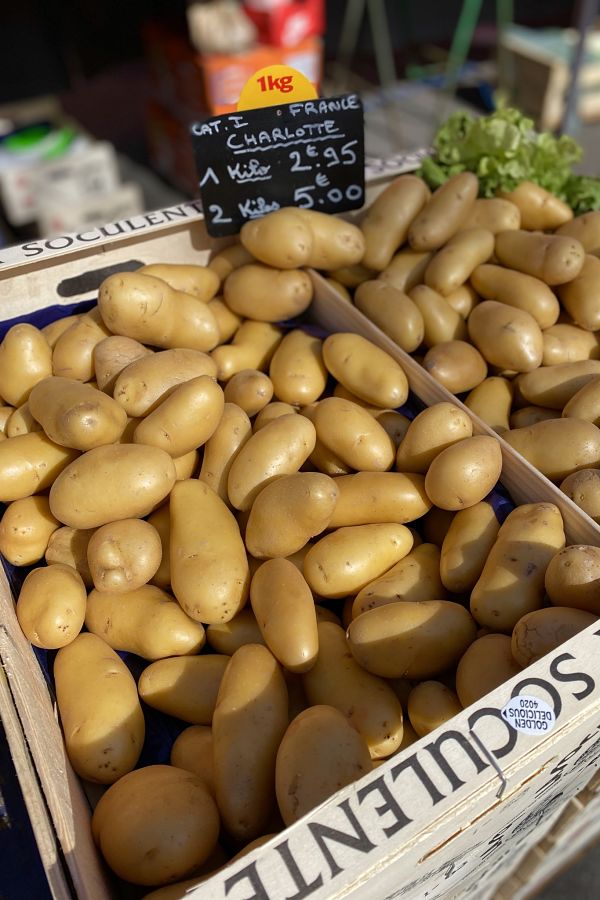 What Kind of Potatoes are Best for Making a Gratin?

Ideally for this gratin, I like waxy potatoes, as they keep their shape. Use waxy and robust potato varieties such as Charlotte, Belle de Fontenay, Anya, Desiree, and Russet. Jersey Royals are good but they’re smaller, so not so easy to slice.

Having said that – if you’ve no potato gendarmes around – basically any potato I’ve tried works well. Even floury potatoes like Maris Piper, although waxy is best as they thicken the stock making it into a sauce.
See more about potatoes on the market pages.

Tips for Making the Best Potato Gratin from Scratch

Now that you’ve got your potatoes, the secret is to slice them as thinly as you possibly can. Anytime I hand-sliced potatoes that were not so thin, the result wasn’t as even and took far longer to cook. The thinnest potatoes slices will ensure even cooking and all the flavours mingling in the oven.

To make the thinnest potato slices, ideally use a food processor. This makes the whole process much quicker and uniform.

However, if you have a mandoline slicer, PLEASE use the safety attachment, as it’s pretty dangerous for slicing large quantities of potatoes (I speak from experience when slicing off the tip of a finger trying to make a pineapple carpaccio years ago!).

This is lighter than the French classic, Gratin Dauphinois. Before serving scatter with freshly chopped flat parsley or other fresh herbs of your choice.

A note on cheese: we use French Emmental cheese, which is light and fruity and ideal for making this gratin dish.  However, you may prefer something much more robust in flavour, depending on what you’re serving with it. So use another French Savoie cheese, Beaufort, or a mix of the two. The result is quite powerful, with a fruity and nutty taste. 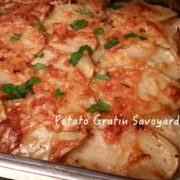 A delicious French potato gratin recipe without cream using thinly sliced potatoes, onions, fruity French Emmental or Beaufort cheeses from the Savoie and chicken stock (or vegetable for vegetarians). The result is a lighter version of Gratin Dauphinois and an ideal accompaniment for roast meats or chicken.

Delicious served with roast meats or chicken. Potatoes: pick waxy and robust potatoes such as Charlotte, Maris Piper, Desiree, Russet, King Edward – although, basically any potato I’ve tried works well (even floury potatoes, although waxy is best as they thicken the stock making it into a sauce).
Tip: cut the potatoes into the thinnest slices possible by using a food processor – and use good quality chicken stock and good cheese (preferably not from a packet!).
Share this recipe