It doesn’t take long to discover why Honfleur is in France’s top 5 of tourist destinations. With only 2 hours’ drive from Paris, I have enjoyed much testing – and delicious tasting – my way around Normandy’s most charming French coastal town to present at least 10 reasons to visit Honfleur. 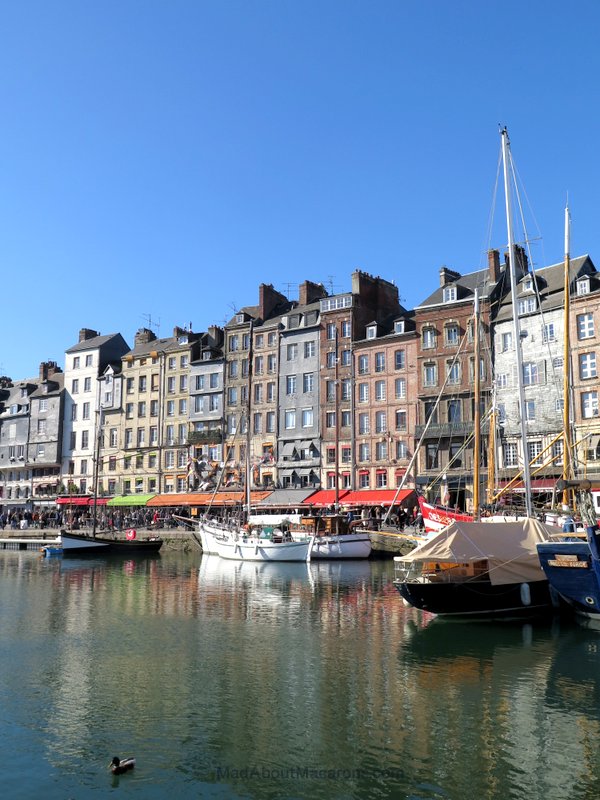 Our most recent stay in Honfleur was for 6 days to sample as many restaurants for you, visit the local museums, walk and discover interesting landmarks, the organic market and soak up the wonderful general ambience of France’s historical and pretty port nestled on the Seine’s Estuary before it opens up to the English Channel.

So, what is there to do in Honfleur? What is Honfleur famous for? Find out in my 10 reasons to visit Honfleur and what makes it such a special, popular getaway in Normandy. 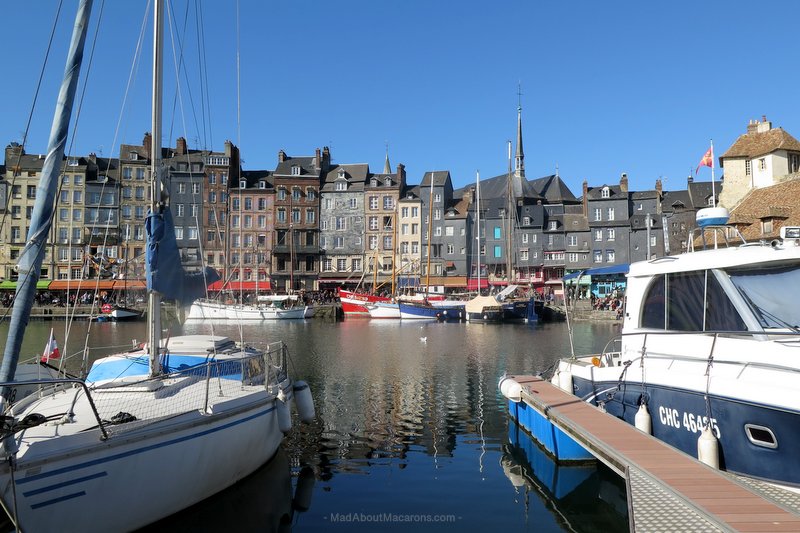 The first spectacle that hits you in Honfleur is the Vieux Bassin, or inner harbour. It’s the heart of the medieval town that has attracted writers, musicians, and painters over the centuries. Listen to the hypnotic bells vying with the tinkling yachts from the nearby churches and at the end of the harbour, is the 17th-century watch-tower, the Lieutenance.  It was here that Samuel de Champlain set sail from Honfleur in 1608 to colonise Canada and led to Quebec’s foundation.

The harbour is witness to its ever-changing mix between the weekday and weekend. Dotted with colourful boats, the quietly humming fishing haven during the week (especially off season) turns into a holiday cacophony of happy tourists on the weekend. No wonder! Just the harbour alone is full of interest, lined with bustling restaurants, seafood bars, cafés and art galleries.

It’s also a well-known spot for artists: often seated quietly behind easels around the port, their brushes squiggle to capture the varying scenes and ambience. 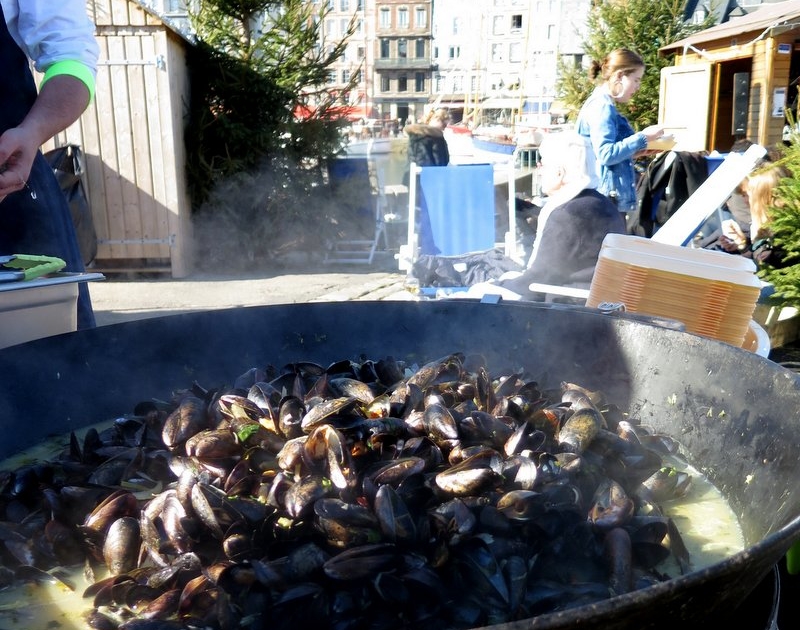 This giant pot of steaming moules (mussels) sums up the fresh seafood and fish that’s caught daily in Honfleur. We often see bikers whizz up the autoroute from Paris just for their Sunday lunch plate of oysters or mussels sold on the harbour.

The old town is what makes Honfleur so particularly charmant and so French. Its quaint narrow streets and pretty cobbled squares are crammed with half-timbered houses, juxtaposed with wooden and slate houses, many on 7 floors. 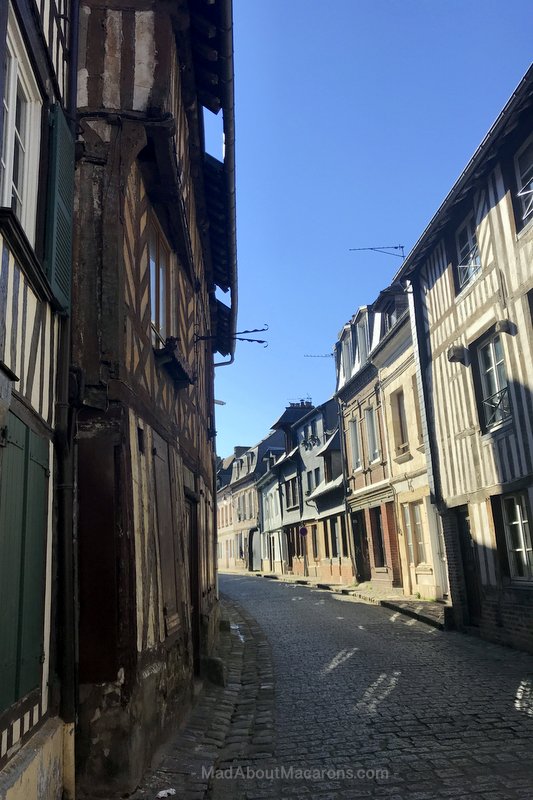 St Catherine’s Church dates back to the 15th century. Constructed by local ship-builders, it’s primarily made of wood and resembles an upturned ship’s hull. St Catherine’s tower is separate across the square and houses the bells. 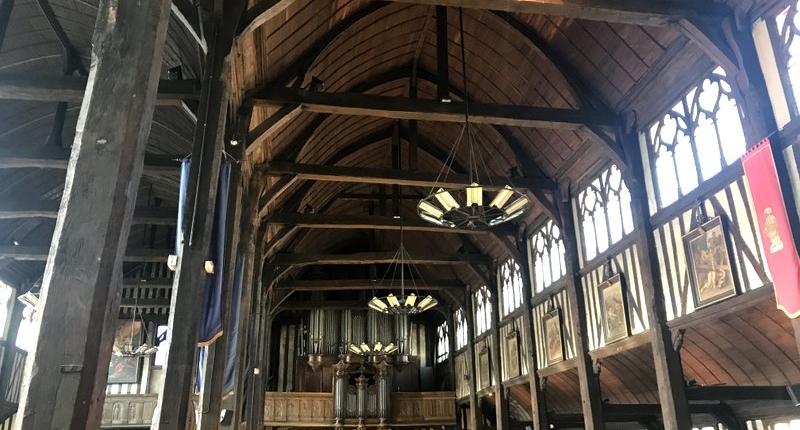 St. Leonard’s Church – With its 15th century portal, just a step inside reveals two spectacular fonts made out of natural seashells, with gigantic oyster shells crowning them (my photo wasn’t good enough here). 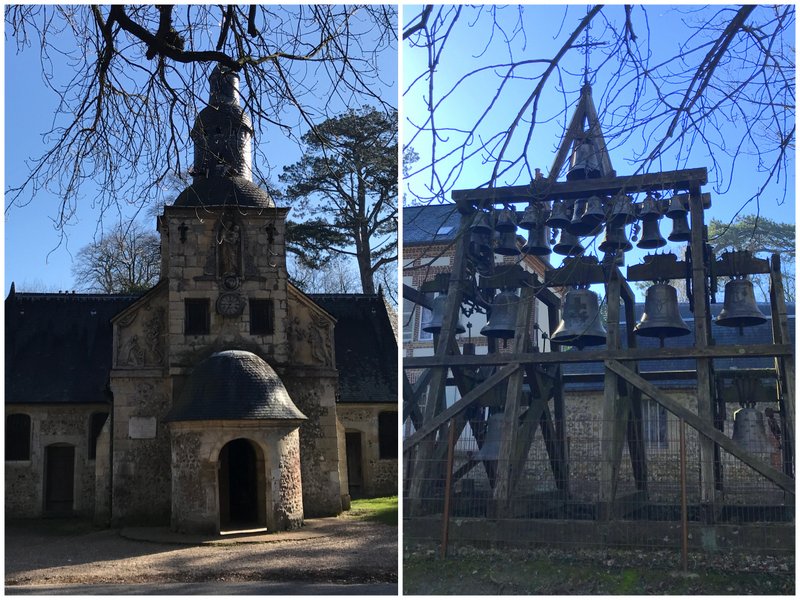 Notre Dame de Grace (Our Lady of Grace) – this chapel is in the heights of Honfleur and is accessible by a short, steep climb (really recommend the walk) or easily reached by car to Le Mont-Joli. I can’t recommend this highly enough – especially out of peak season to appreciate its special tranquility. Inside, boats and relics high on the ceiling and thanksgiving plaques by the Honfleurais and pilgrims can make this a rather personal experience. Every 15 minutes, the impressive external bells ring and on the hour, don’t miss the bells playing Bizet’s Carmen from l’Arlésienne.

It’s also here that the last king of the French, Louis-Philippe and his wife, Marie-Amélie, spent their last days in France before leaving for England. 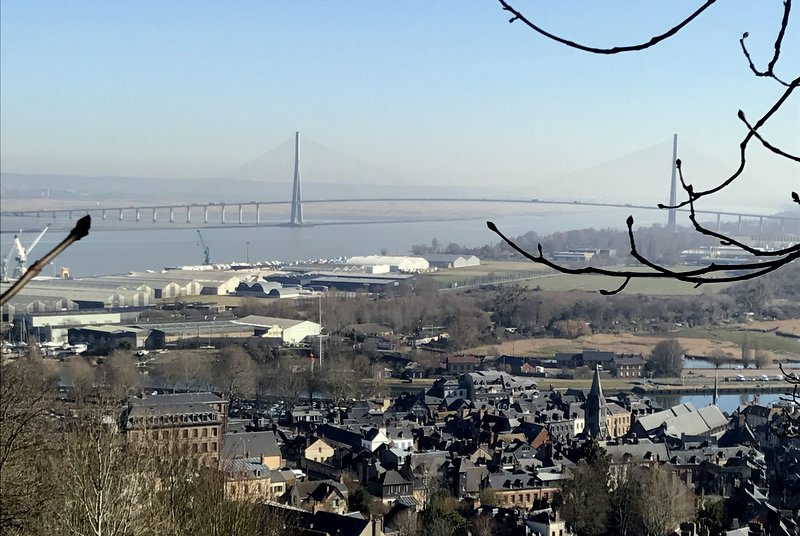 From the Mont-Joli next to the Chapel of Notre Dame de Grace, is a fabulous view of the River Seine’s Estuary and the Pont de Normandie – 2.14 kilometres across the Seine from Honfleur to Le Havre.

Opened in 1995, the Normandy Bridge is the largest cable-stayed bridge in the world. It’s a motorway toll bridge but for walkers and cyclists it’s free, with a footpath. Check out the monument just at this panoramic viewpoint: it glorifies Notre Dame de Grace for sparing Honfleur during the 1944 Battle of Normandy. 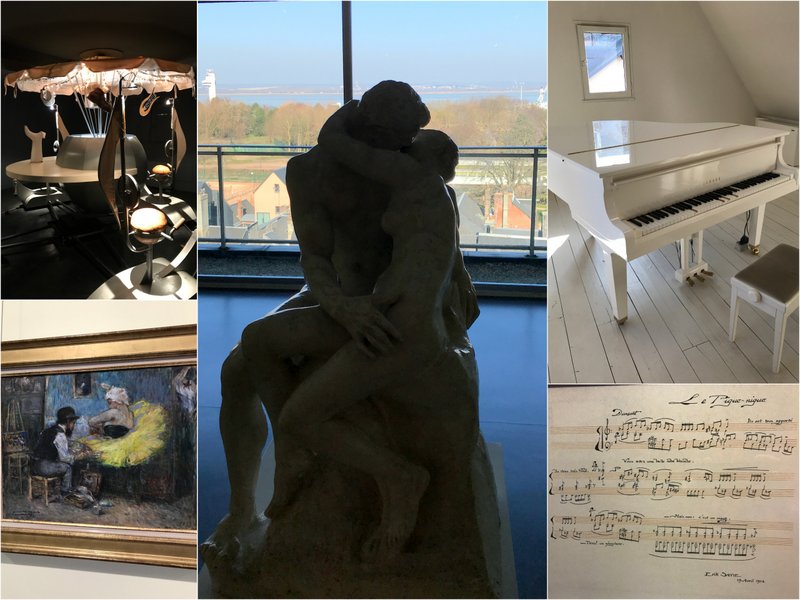 With Honfleur being the birth-town of major artists such as Eugène Boudin (who inspired Claude Monet) and Erik Satie, it’s great to delve deeper and discover more about them and other artists and writers (Alphonse Allais) that worked here. Feel the history of the Honfleurais of its fishing, maritime world and way of life over the centuries. We purchased a reduced-priced collective ticket for the following 4 museums (except the separate salt lofts): 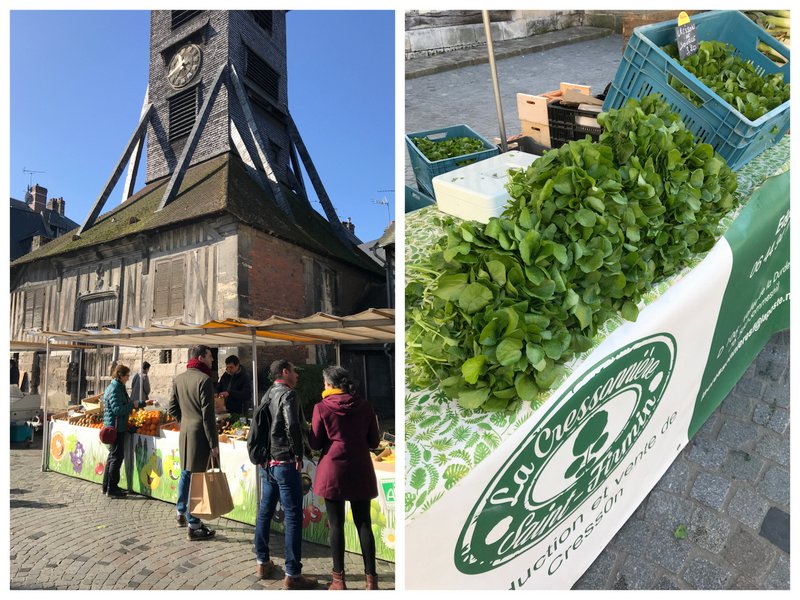 In St Catherine’s quarter, under the shadow of St Catherine’s Bell Tower, is the local farmers’ organic market on Wednesday mornings. Here you’ll regularly find an abundance of locally harvested watercress (to see how it’s grown, see my post from Veules-les-Roses, including a recipe for French watercress soup.)

The main market is on Saturday mornings, with fruits and vegetables, other Normandy local specialities such as Cider,  Calvados and cheeses (such as Pont l’Evèque, just down the road), plus plenty of fish and seafood. Head to Place Arthur Boudin for the flower market and for clothes, accessories and souvenirs, you’ll find them at the Cours des Fossés et Rue de la Ville.

Arriving in Honfleur on non-market days is not a problem, as shopping is also great for local produce to quaint antique shops. Try the Crottes de Mouettes (seagull droppings!), morsels of chocolate and caramel. 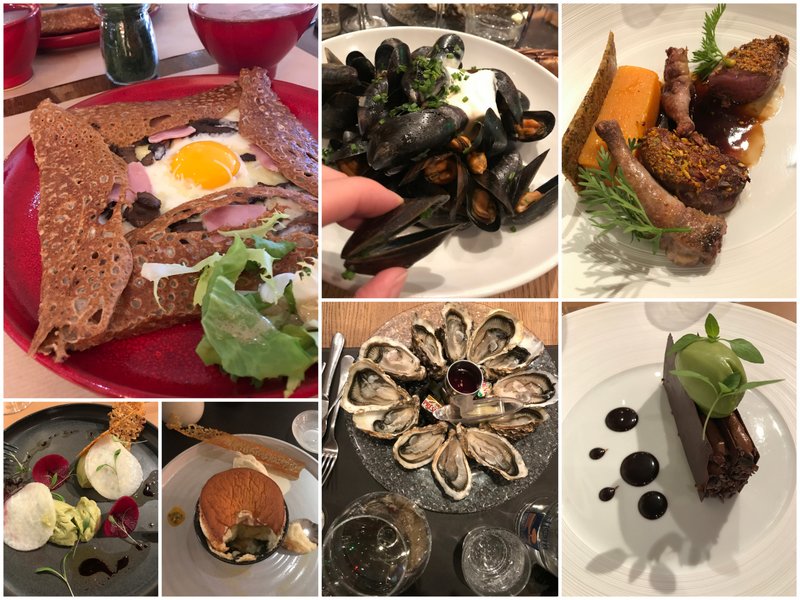 Whether it’s fine dining in any of the numerous Michelin-listed addresses, enjoying a plate of oysters or mussels by the harbour, or a good quality traditional Normandy crêpe, there’s something for all budgets and tastes in Honfleur. Here is my personal list of favourites. Note that during January and February, many restaurants close for their annual holidays (I loved the humour in one window – although closed it finished off saying “sending salty iodine kisses”). 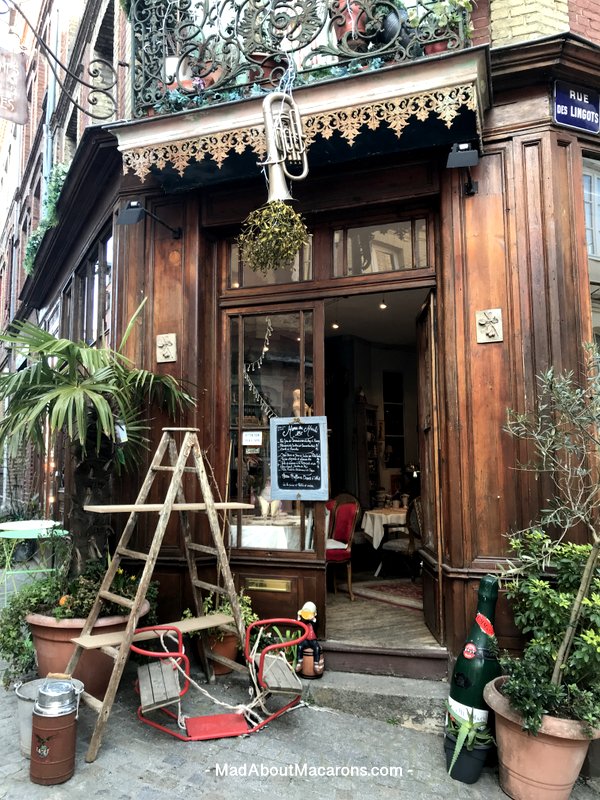 Only 2 Hours Drive from Paris

Honfleur is so near to Paris! With only 2 hours drive north of Paris, Honfleur is particularly accessible. It’s pretty much a straight drive up the Autoroute (A13), passing Giverny. So, if you have time en route, visit Monet’s house and garden. However, if you’re looking to spend time between Paris and Honfleur, it’s a “straight” sail on the buckling River Seine all the way up to the Estuary.

Good Base for Visiting Normandy

If you’re staying in Honfleur for a few days, it’s a perfect base for visiting the nearby towns of Étretat, Deauville, Cabourg, Veules-les-Roses (check out the summer sea festival), and Le Mont Saint-Michel. It’s also great for discovering the nearby Cidre and Calvados farms, as well as cheese in nearby Pont l’Evèque. 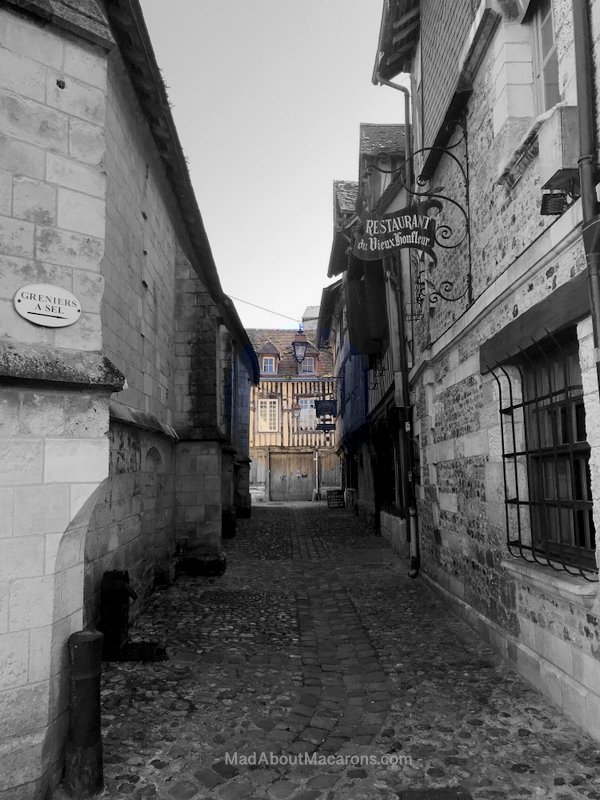 Disclaimer: This post is not sponsored. This was a personal trip. As we live in the Paris region, this is to share one of the top places to visit near Paris. 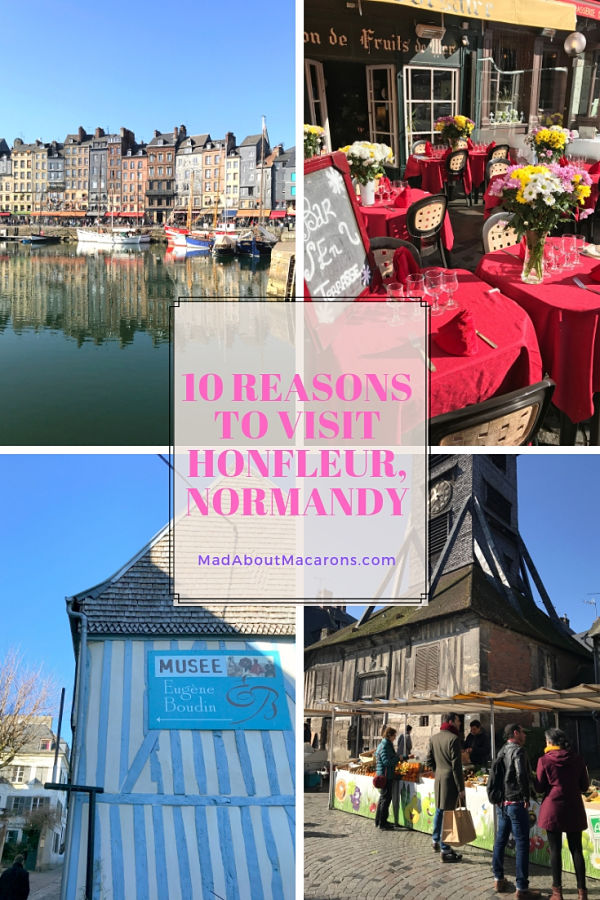 I just received my United Airlines gift card; I kid you not my niece asked me to help her raise money on Fhundy for her youth auxiliary club. At first I was like baby I’ll just donate and then she said “Aunty Nae you can get a gift card if you help me out” she did say they had gift cards for Barney’s LV Chanel etc.. so I said I will check it out. She wasn’t kidding so I decided to give it a chance 2 weeks later I raised enough to get a $2000 United Airlines gift card. Yes, people I helped out niecy and got myself a way to fly to Normandy and I hope i get to visit Honfleur?

Very clever of you!

I enjoyed lunch at SaQuaNa in August 2013 it still stands as my all time favourite dining experience, I have the menu of the day framed as a memento. Lovely to hear the restaurant is going from strength to strength. I hope to return on one of my visits to France from Australia. Thanks for the article.

Wow! That must have been something for you to frame the menu. Here’s hoping you return soon, Karen, as there are so many wonderful restaurants around here.

This is wonderful information!!
I am saving this for a future trip! We have not been to this part of France yet and now I am so looking forward to exploring this area! When I read moules and oysters that was it!
Merci xx

Well, as a seafood lover you’ll adore this place. So glad you’re planning to visit and this helps, Devra.