Have a lot of watercress? Then make this healthy watercress soup, a French classic. It’s not only packed with vitamins but has a particularly gorgeous spicy flavour – even a bit cheesy without the cheese! Get the easy recipe below – but first, a visit to see watercress being harvested in the fields in Normandy, France. 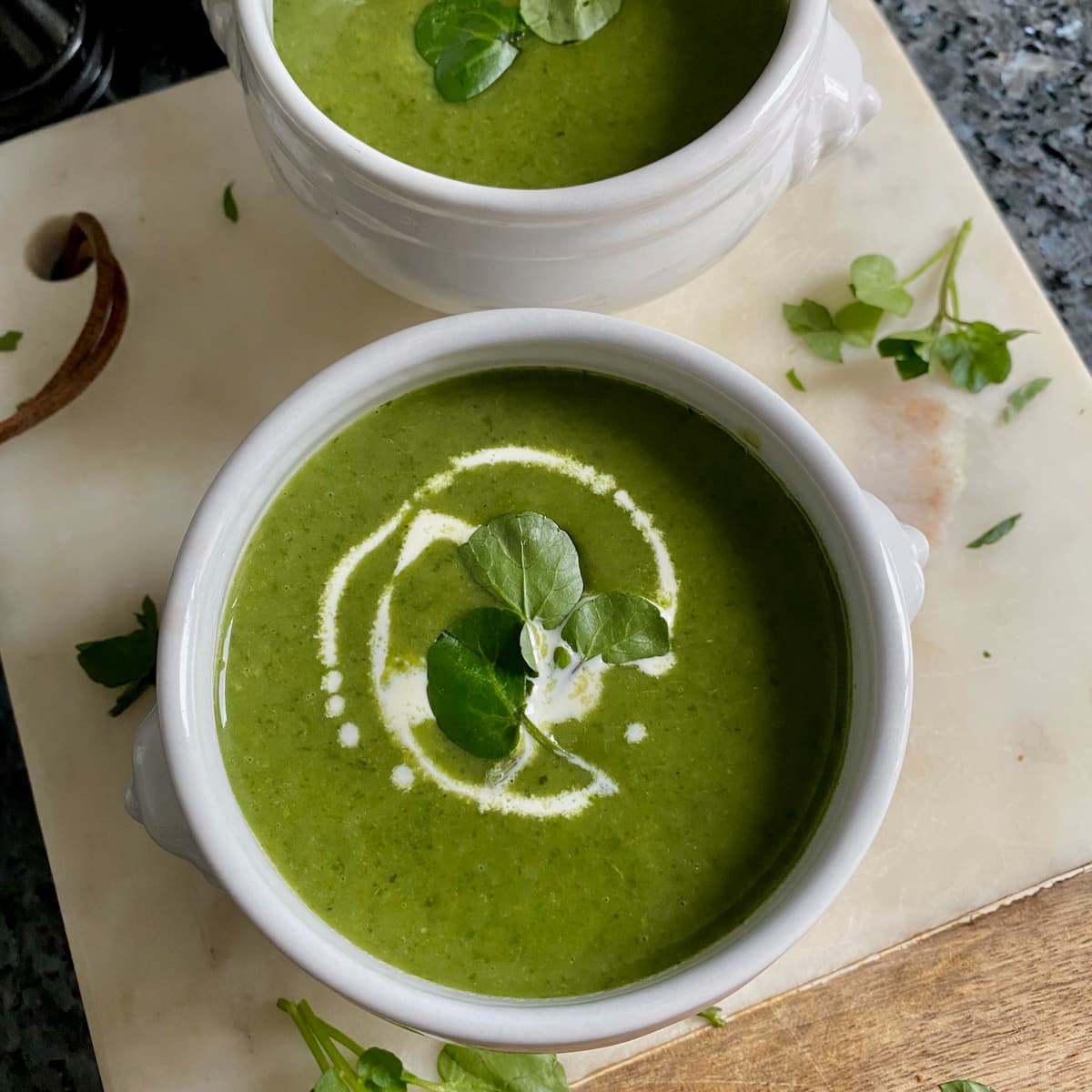 How is Watercress Grown?

Come join me on a walk along watercress lane (I want to live in a street called Chemin des Cressonnières – isn’t it romantic?) in the Pays-de-Caux in Upper Normandy. It’s the way to see the French watercress fields, or Cressonnières in Veules-les-Roses.

Watercress (Nasturtium officinale) thrives in cool flowing streams, where it grows submerged, floating on the water, or spread over mud surfaces.

Don’t confuse it with the tiny ornamental watercress (genus Tropaeolum) that’s grown on the windowsill and famously put into British egg sandwiches – they are both completely different. 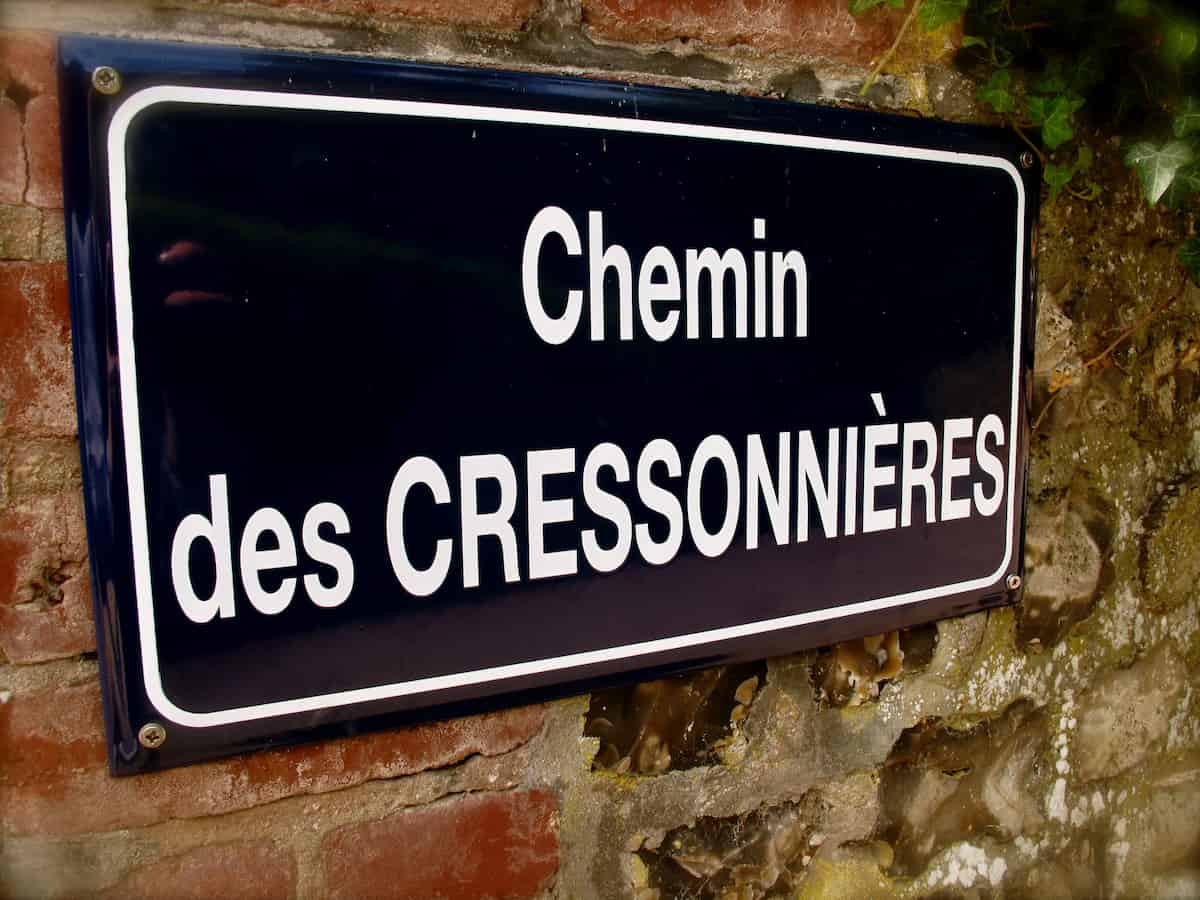 Veules-les-Roses on the Normandy coast is one of the prettiest towns in France. It has two main attractions: 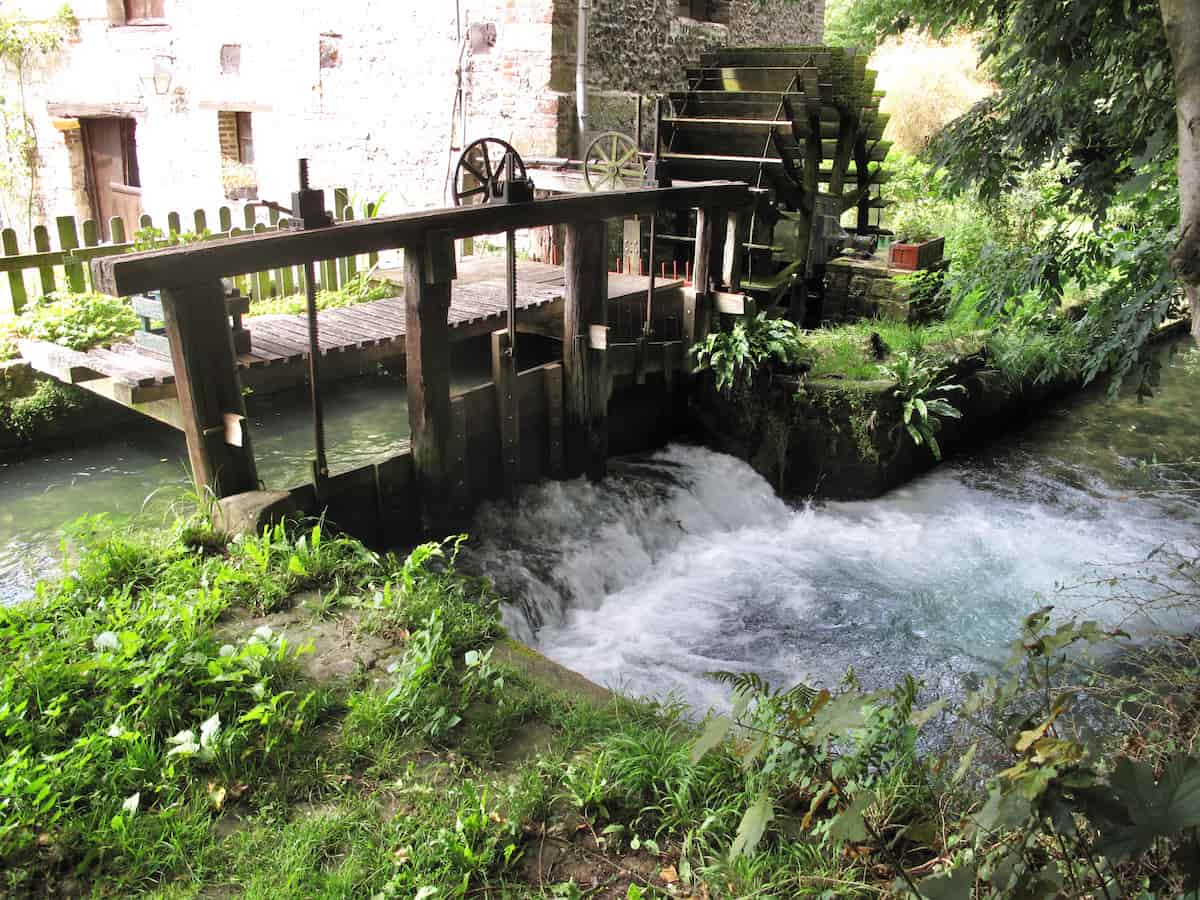 The clear running water’s current of Veules-les-Roses has favoured the cultivation of watercress here since the 14th Century. 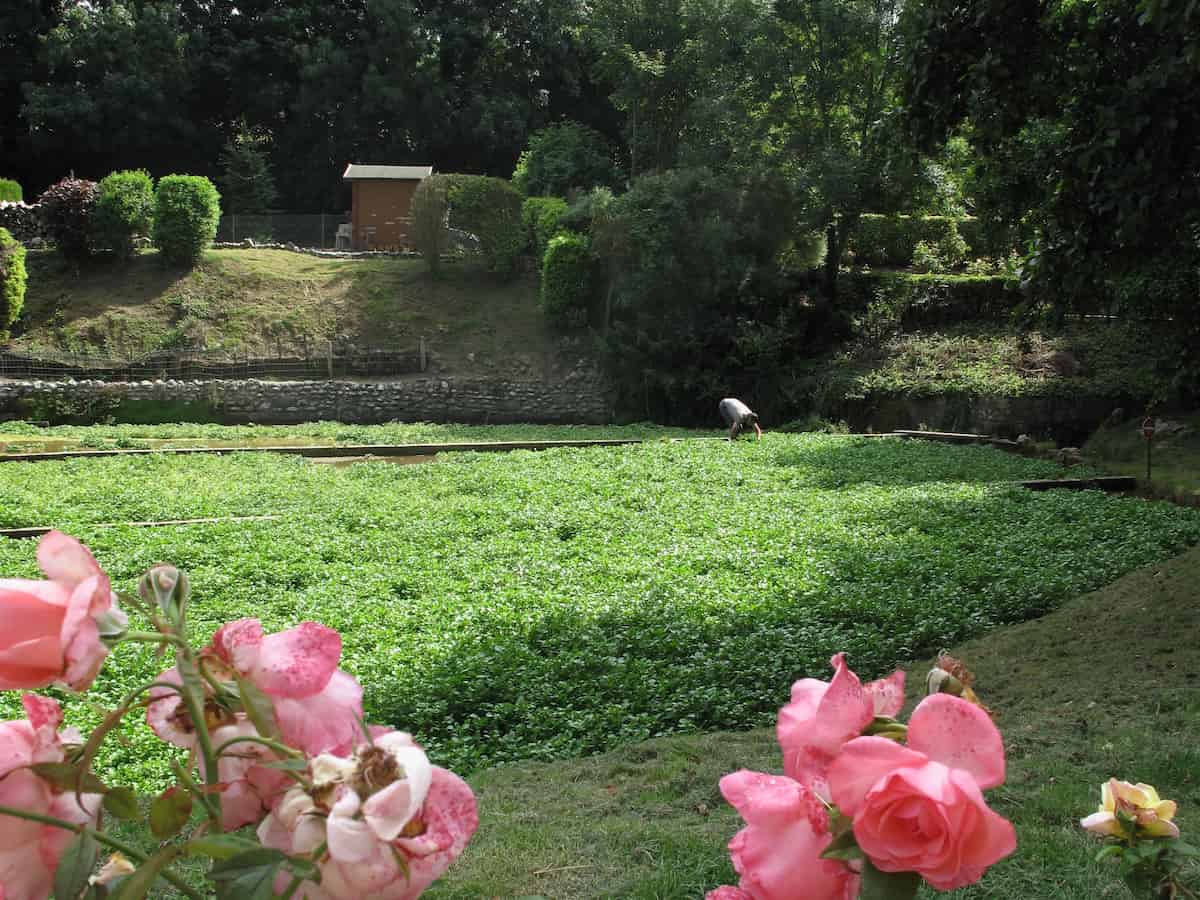 Harvesting watercress is done by hand with just a knife and ties to make each bundle. 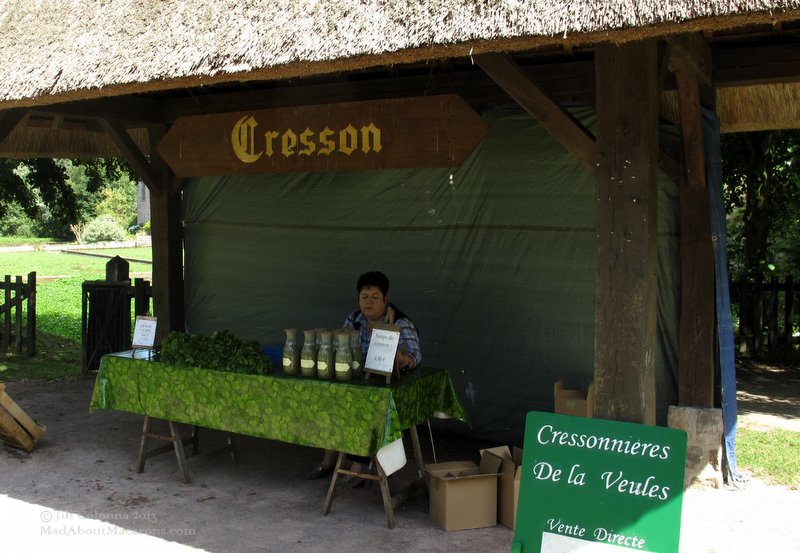 The season lasts between September and May with December seeing the best of the harvest.

In April, there’s even a Fête du Cresson in Veules-les-Roses. So if you fancy partying around watercress and learning more about it in France, this is where to go.

For more on Normandy, read my top 10 reasons to visit Honfleur.

How is Watercress Harvested?

The bunches of watercress that are formed during harvesting are called chignons, when the roots of the stalks come outside the bunch. 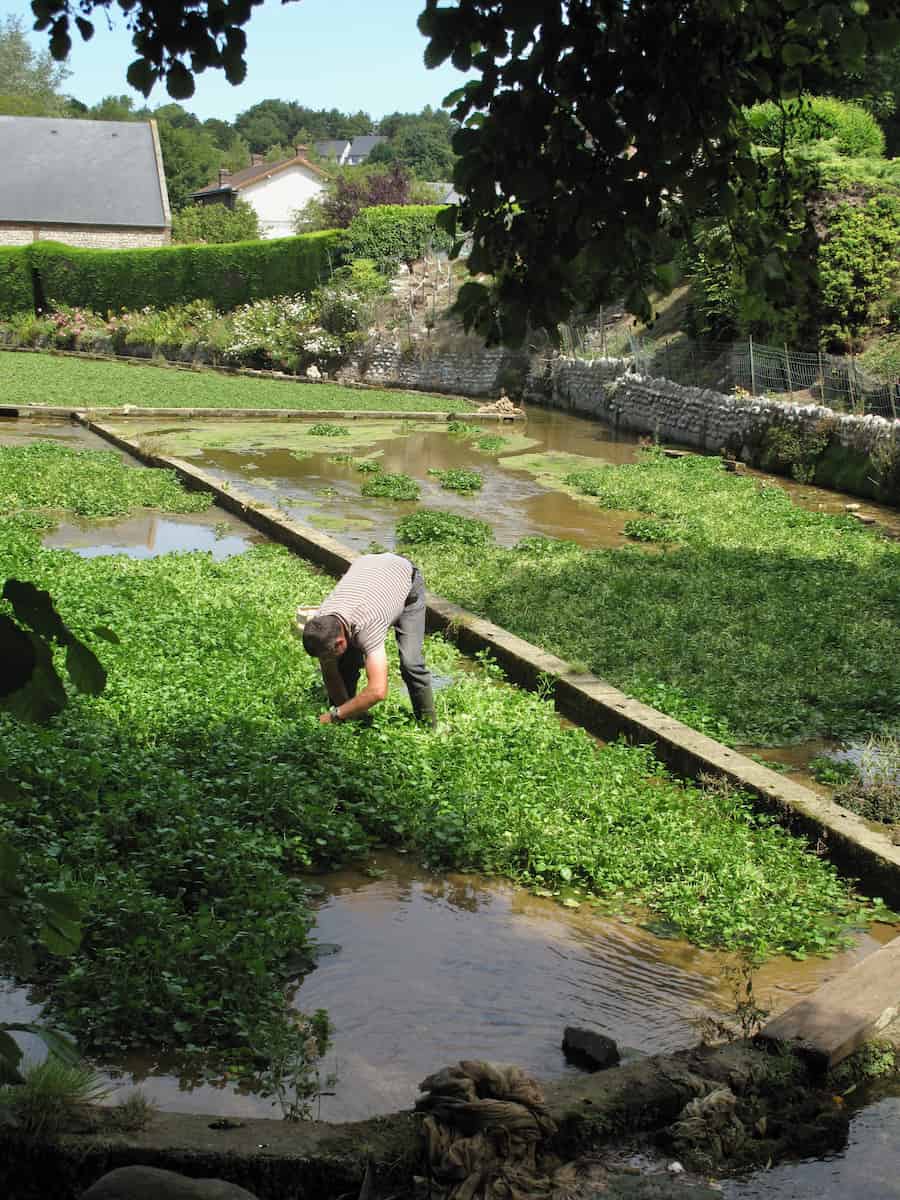 Watercress is known for its fine leaves and particularly spicy taste. It isn’t bitter once cooked and if served as raw leaves in a salad, it’s deliciously peppery with hints of mustard. We love it raw in small doses and it’s delicious mixed with other salad leaves – served with this Onion Tarte Tatin, for example.

However, the strong peppery taste calms down when cooked. It’s not like the taste of spinach or even like this rocket (arugula) soup – once cooked in soup, it even has a slight taste of cheese to it. Don’t ask why but my daughters confirm they get that too. 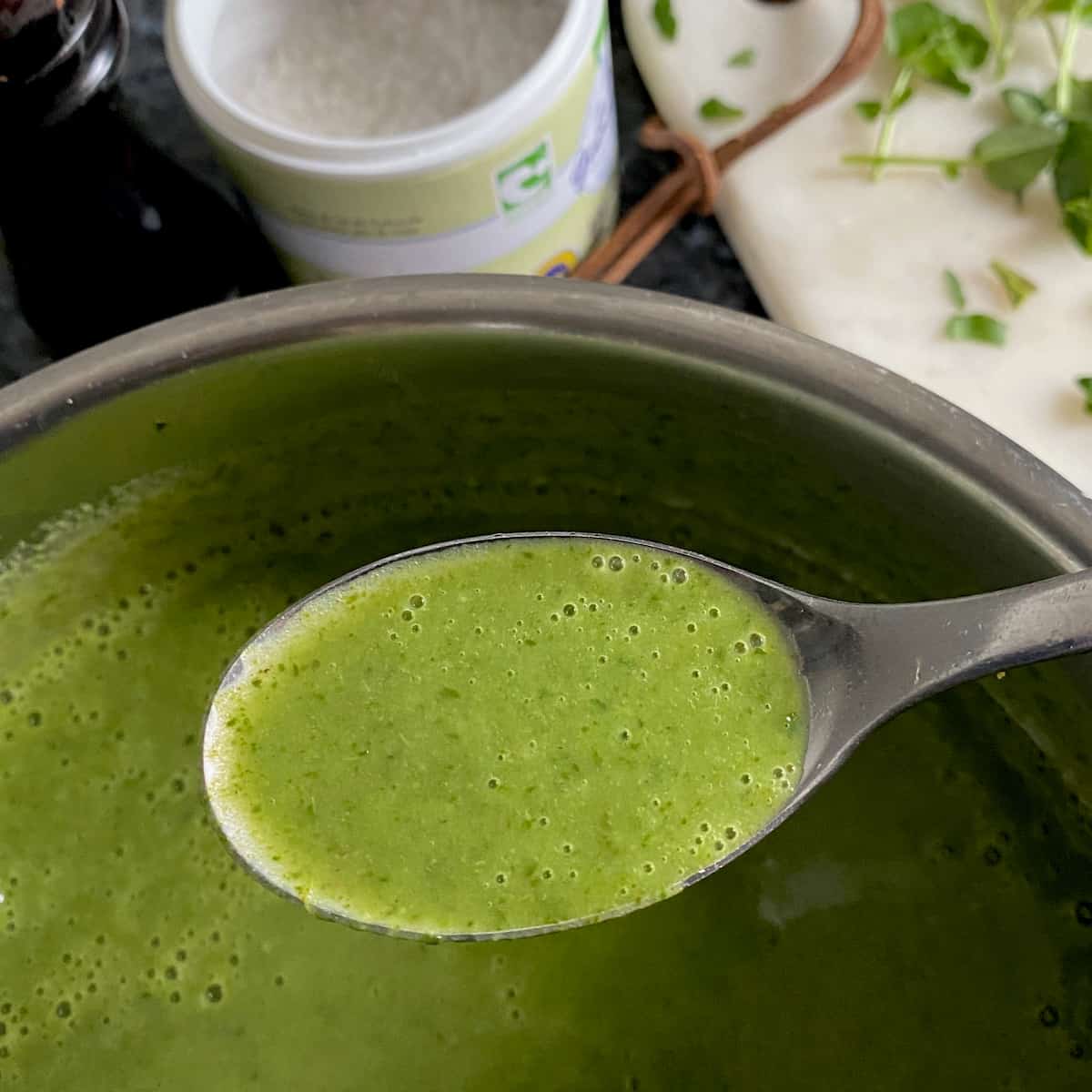 Once blended, add salt and pepper to taste

Is Watercress Soup Good for You?

A comforting bowl of Soupe au Cresson is extremely healthy, as it contains iron, calcium, potassium and vitamin C – and is a great antioxidant and source of protein. It’s even said to reduce the effects of skin ageing.

In France, it’s popular in Autumn and Winter at the market to see stacks piled high of neatly tied bouquets of watercress.

Each time I discuss watercress with the market sellers, there’s really only one recipe the French associate with it – and this is it! Approved by the French family – even my Corsican Parents-in-Law who adore soup. It receives a firm thumbs up each time. So now over to you to make it…

How to Make Watercress Soup

First prepare all your ingredients: chop an onion, a garlic clove, potato (floury variety best for soup, like Russet and Binje in France) and wash the watercress.

For more on French potatoes and other varieties for cooking, see the Market Produce Potato page. 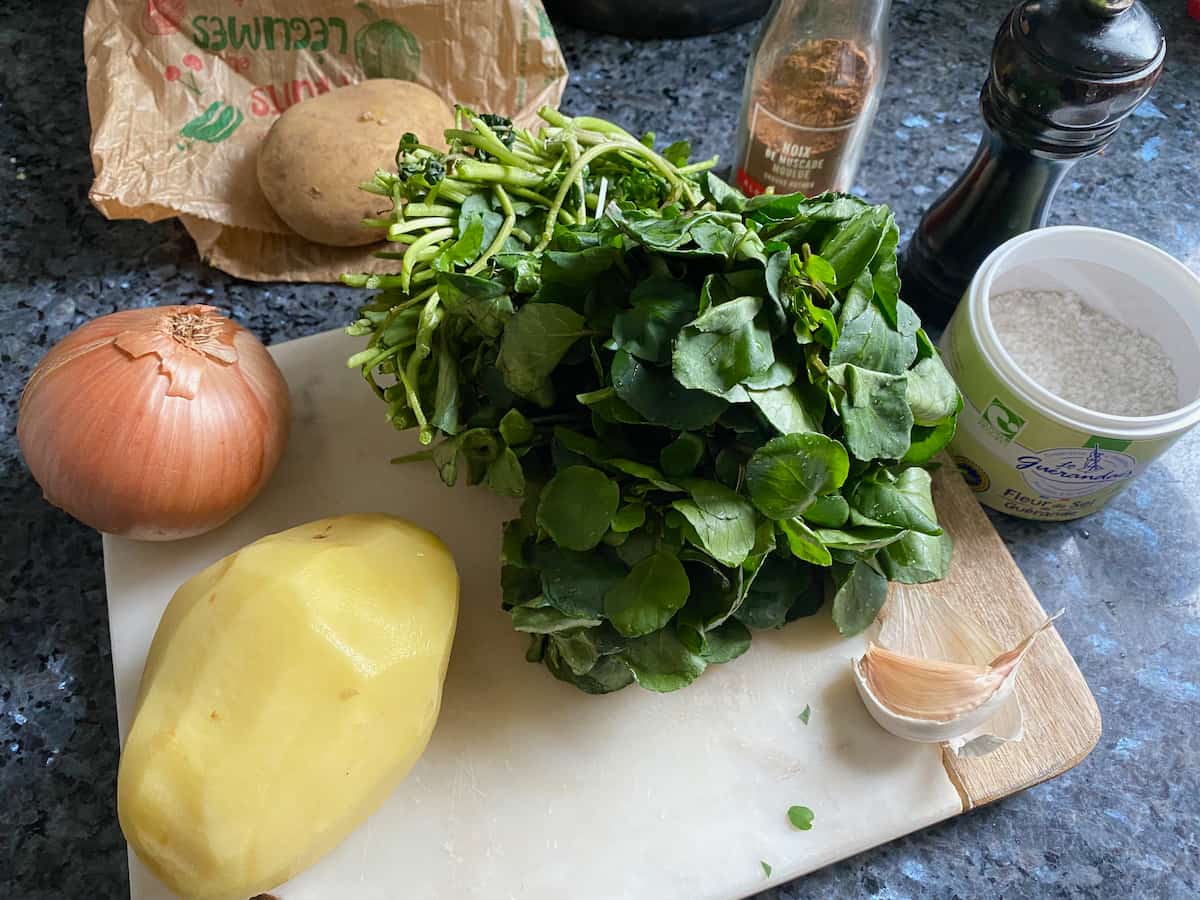 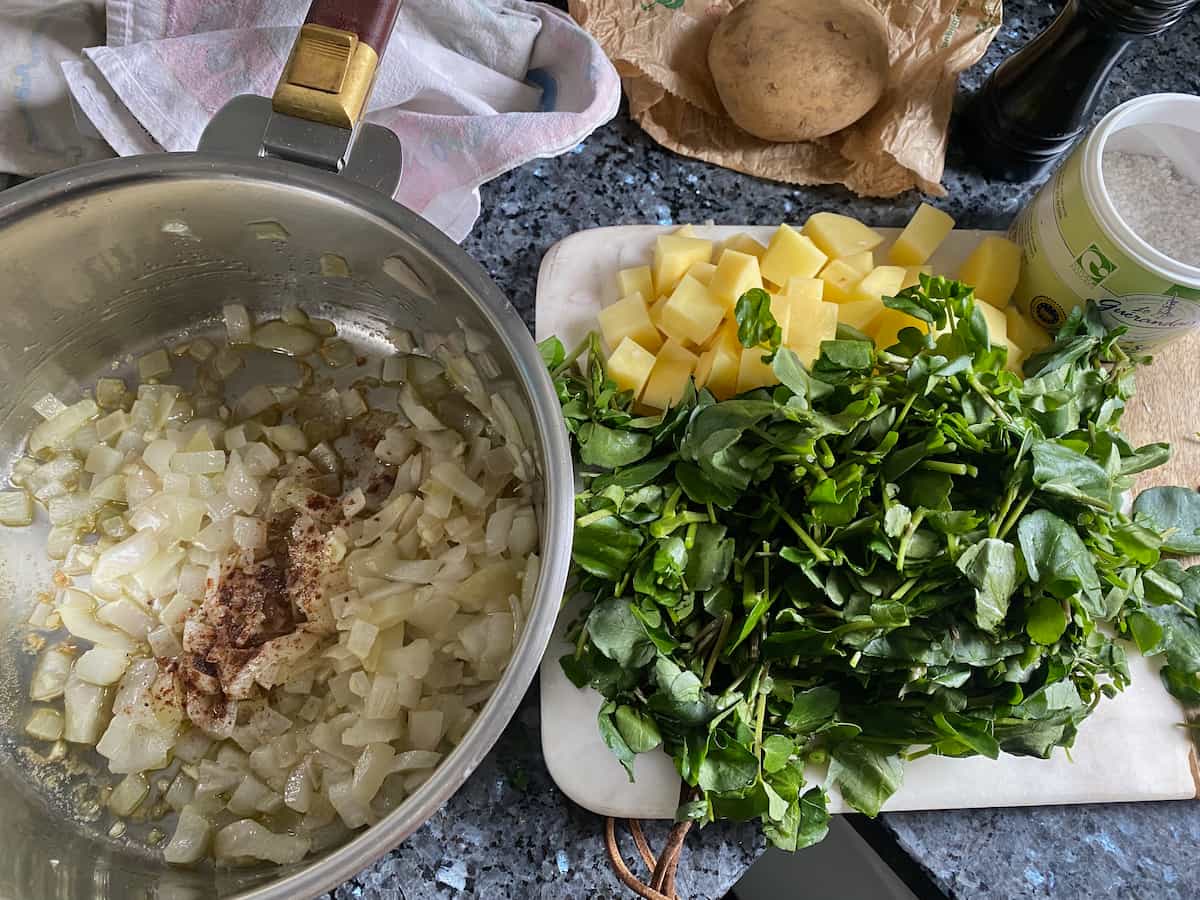 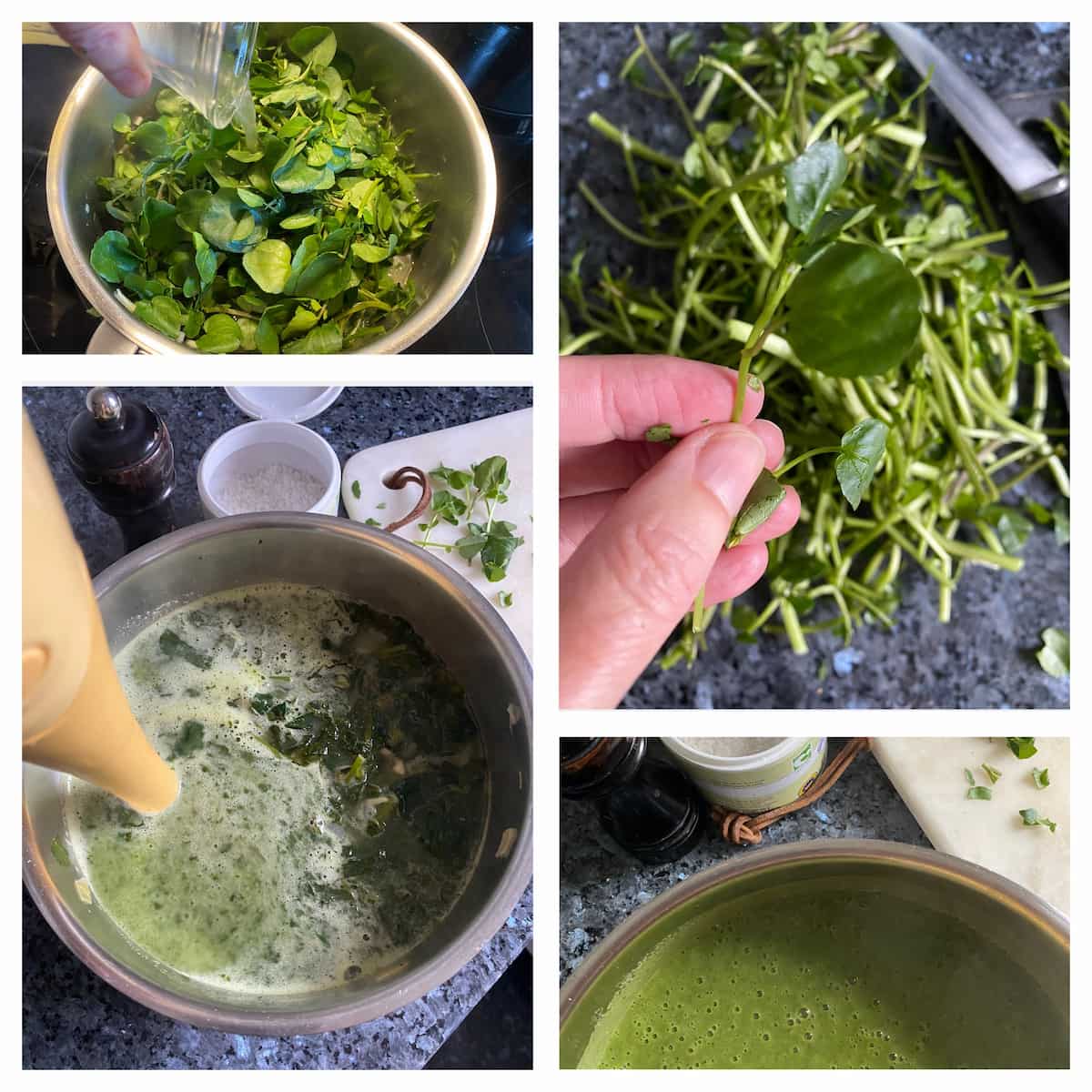 How Long Can I Keep the Soup?

How to Serve – Ideas 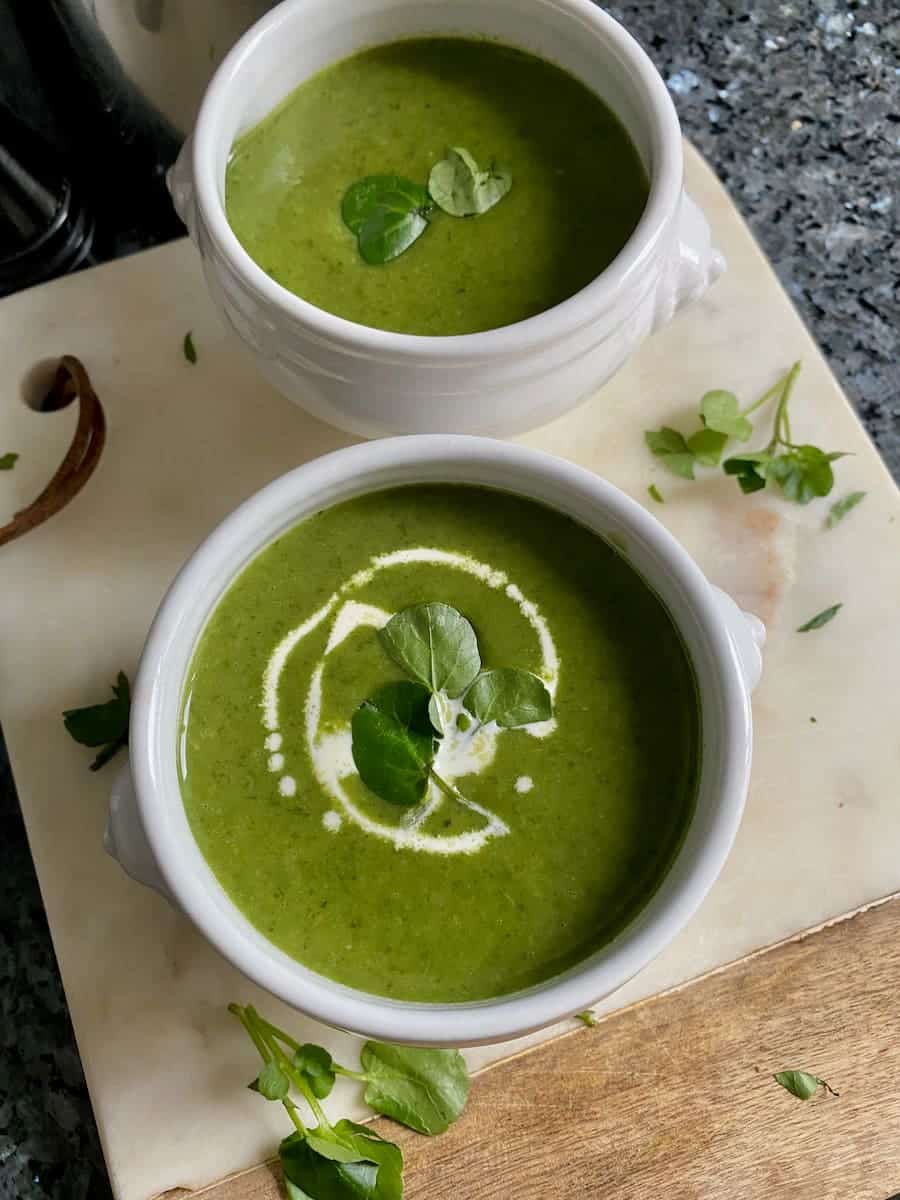 A delicious French soup of fresh watercress made with potato. It's not just packed with vitamins but has a particularly gorgeous spicy flavour - even a bit cheesy!

Freezes well for up to 2 months.  Otherwise can keep in the fridge covered for up to 3 days. If serving as an elegant starter dish, swirl in a little cream. Why not surprise your guests with a mini Mad Mac herb macaron? The recipe is on page 97 of Mad About Macarons. Nutritional Information: 124 Calories per serving; 2g Protein; 9g Lipids; 8g carbohydrates. Measures: Please note that all my recipes are best made using digital kitchen scales in precise metric grams. Both ounces (and cups) are given as a guide.

This post was first published 5 November 2013 but has now been updated with new photos, more info and tips.