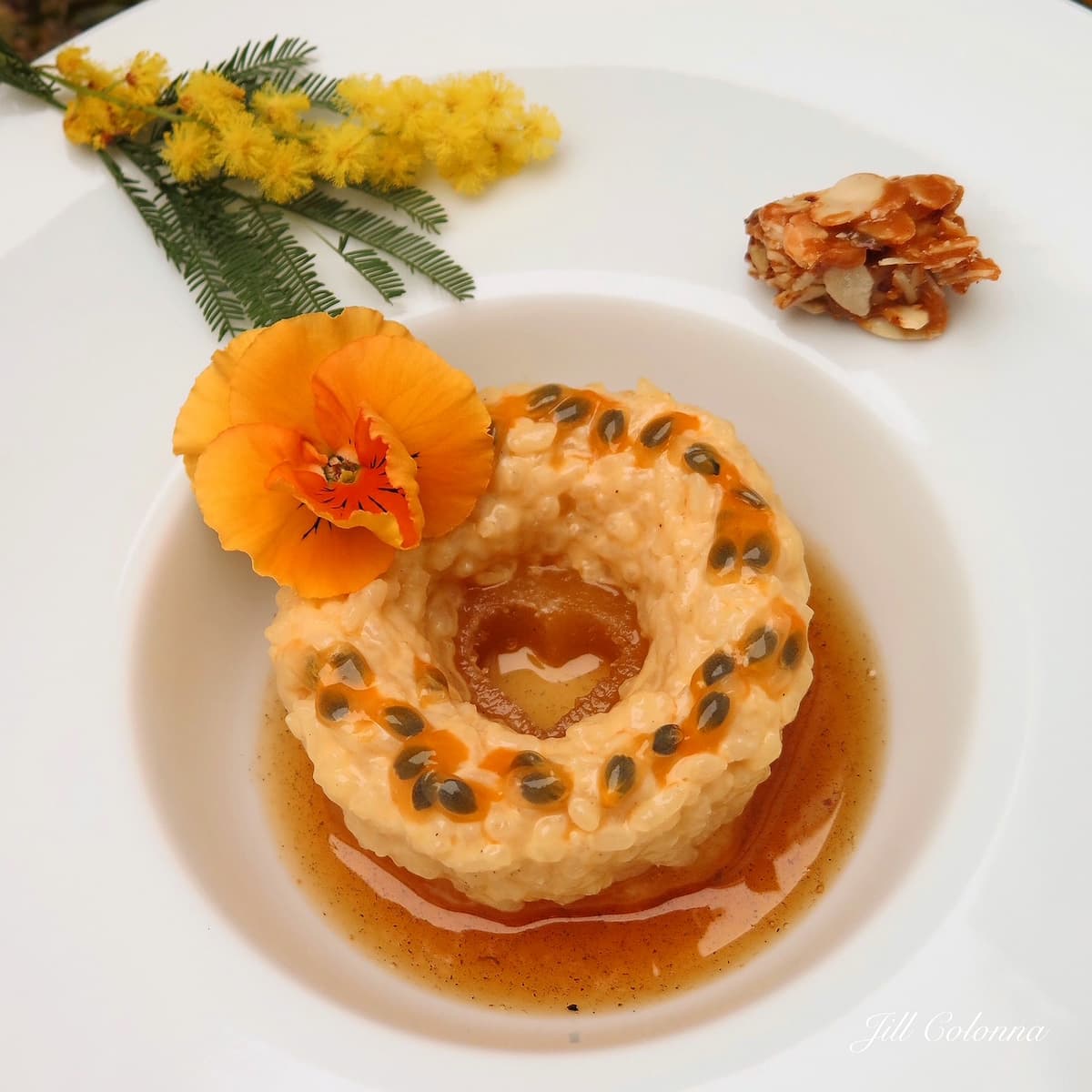 My Gourmet Challenge Near Paris

I love a gourmet challenge – as you can tell from my latest Vegan Raspberry Macarons. However, you may recall in my latest newsletter, our regional Seine Saint Germain tourist office set me a local French culinary challenge. So here’s my first recipe, Caramelised Pineapple Rice Pudding.

The aim is to recreate recipes of author, Alexandre Dumas (The Count of Monte Cristo, 3 Muskateers…). During some initial research, I discovered a fruity French rice pudding dessert made with pineapple or apricots and, after a twist or two to Ananas à la Condé, have come up with individual desserts to make a Dumas-style version of French rice pudding.

According to Larousse and other more recent French culinary dictionaries, Condé (or à la Condé) is a chilled entremet (old French for the modern dessert) made of rice pudding cooked in milk, presented in a savarin or crown-like mould and served with poached fruits in syrup. The classic is made either with apricots or pineapple slices soaked in Kirsch and decorated with candied fruits.

Why the name, Condé? It refers to the Prince of Condé (aka le Grand Condé), chief subordinate to King Louis XIV and occupied the family’s estate of the Château de Chantilly. The Prince of Condé allured such influential guests as Molière, Racine, La Fontaine and Bourdaloue (a French minister/preacher, who’s Parisian street, rue de la Bourdaloue, is named after him and is where the Bourdaloue Tart was invented.

The Prince of Condé’s butler/chef was the legendary Vatel, renowned for committing suicide since the fish didn’t arrive on time for Louis XIV visit. Did Vatel invent this dish? Who knows, but it certainly wasn’t with pineapple. Pineapples didn’t arrive in France until 1733 under King Louis XV, when they could be grown in the Potager’s greenhouses in Versailles.

With 172 years apart, our famous novelist neighbour, Alexandre Dumas, built the Château de Monte Cristo in Port Marly and, as of 1847, held lavish parties centred around the most gastronomic of feasts with impressive wines. Towards the end of his life, Dumas wrote Le Grand Dictionnaire de Cuisine, documenting many of the classic ingredients and recipes around – all of them, no doubt, served at his castle-like demeure in les Yvelines.

My challenge is to recreate some of his recipes, although it’s not as easy as I thought.According to a few menus documented in the Chateau de Monte Cristo, he doesn’t even specify many of the desserts (entremets) but cites mainly “Seasonal Fresh Fruit” or a “Basket of Fruits”.

The pineapple was the height of luxury as so difficult to come by, and was seen more as a symbol that adorned not just Versailles but the aristocratic homes in the 19th Century. They were so expensive that it was big business – you could even RENT a pineapple to show off.

As Alexandre Dumas was proud to show off his wealth to his guests, I figure the pineapple is a fitting recipe for a Dumas recipe challenge! 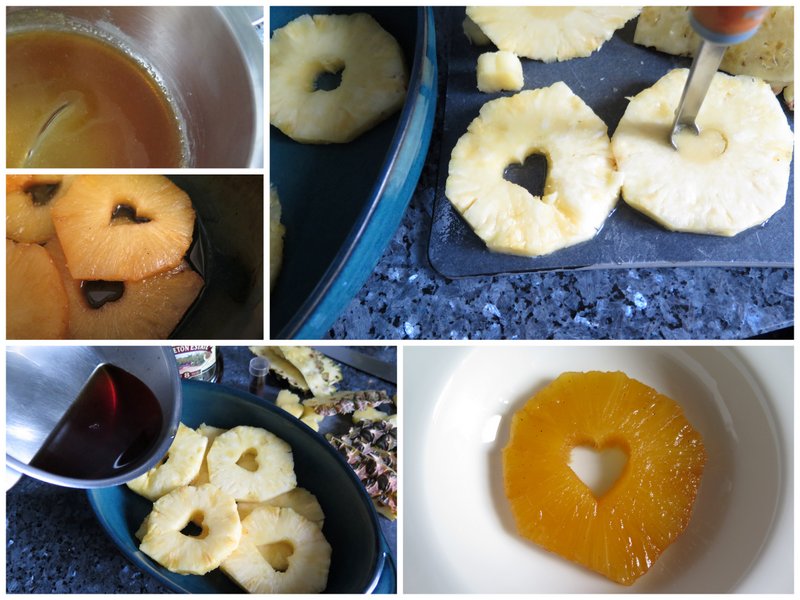 How To Make Pineapple Love Hearts

Quite by accident, I cut out pineapple love-hearts for Valentines using a small corer. As the corer was a bit too small, I cut out 2 rounds, realising it turned into a heart. No pinks, no ribbons – just a heart that’s hiding secretly, drowned in the most lush pool of vanilla and rum syrup. 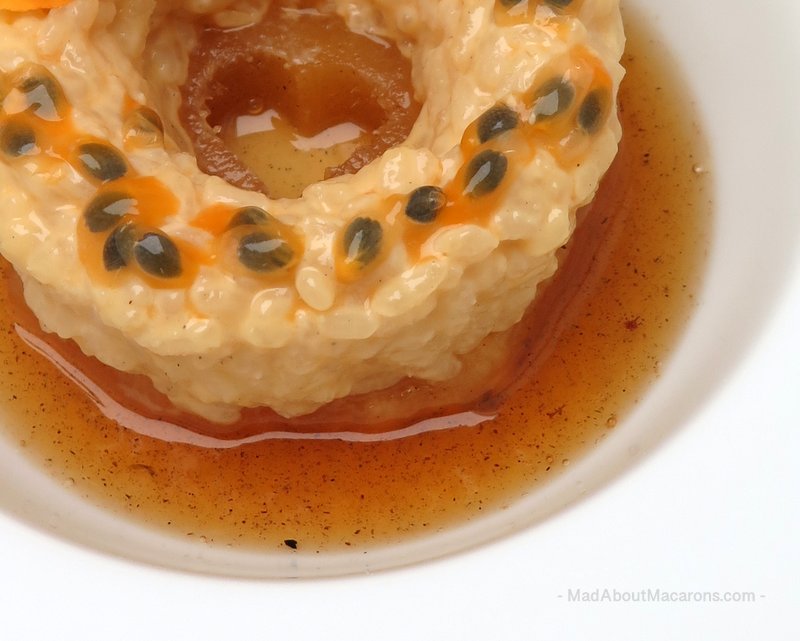 This recipe classic is normally one large rice pudding, augmented with vanilla and egg yolks to hold its shape, placed in a large crown-like savarin mould and decorated with pineapple slices macerated in Kirsch. In order to boil off the alcohol and make this recipe family friendly, I caramelise pineapple slices in a rum syrup (it’s a variation to this whole roasted rum pineapple recipe), place individual vanilla rice puddings (in mini savarin moulds) on top of a slice of caramelised pineapple and serve with nougatine for added crunchy texture. 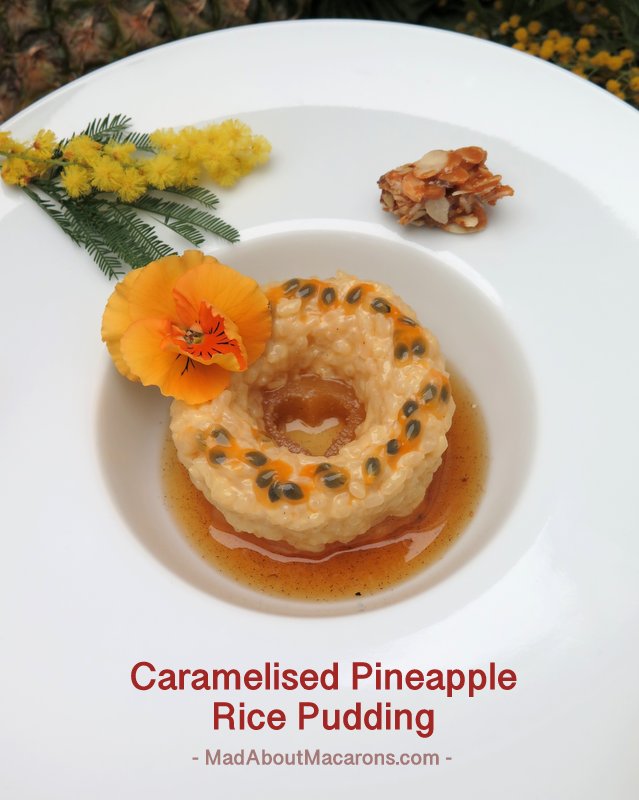 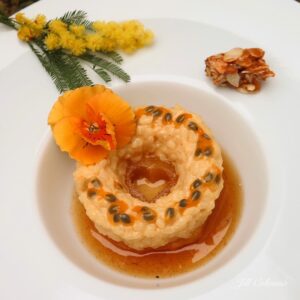 A French Rice Pudding served "à la Condé" style on top of caramelised pineapple roasted in a rum syrup and topped with passion fruit. A perfect light yet special dessert for any occasion - and a chic way of serving vanilla rice pudding! The pineapple can be roasted a day in advance to make the dessert even easier to prepare.

For the Caramelised Pineapple

For the Rice Puddings

Serve with Nougatine to give some added crunch for texture.
Share this recipe

this sounds so very delicious jill. i love going thru old cookbooks. it’s so funny when they expect you to know how to do things without being told:) cheers, sherry

I hear you, Sherry – and when it’s in an old language it’s often difficult to work out what they really mean.

Oh well done, that sounds like a really fun challenge. Loved reading Dumas when I was younger. And gosh, pineapples have been around in France for longer than I’d have thought. Your dessert looks terrific and the thought of caramelised pineapple has got my mouth truly watering.

Thanks, Choclette. Looking forward to discovering a lot more about Dumas’s culinary dictionary. You must try that roasted pineapple – last night we had the leftovers of it with the chocolate ginger fondant cake – it was wonderful!

Oh my Jill, this Caramelised Pineapple Rice Pudding sounds and looks utterly dreamy! Have never had pineapple with rice pudding before but now I want it!