When I heard the Veganuary challenge making its annual rounds, I realised I hadn’t tried to make a vegan macaron yet. Now I’ve made this Raspberry Vegan Macaron Recipe and learned from the experience, I’m happy I have cracked the challenge of making macarons without egg whites. 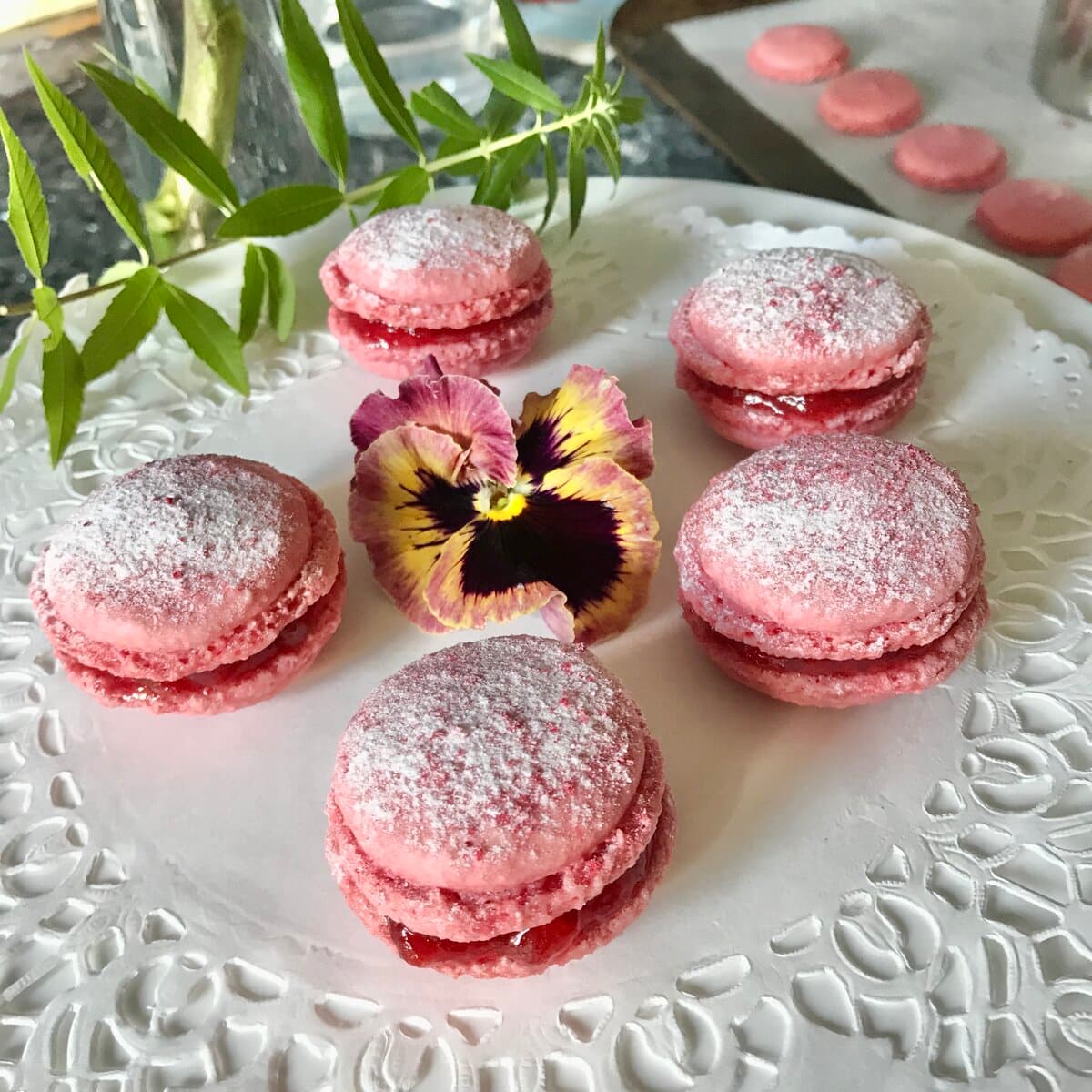 Lately I’ve heard people ask if macarons are vegan.  Classic Parisian macarons are made using egg whites so, while they are gluten free, they are not vegan. You’ll find all of these recipes in both of my books.  However, the recipe below is for vegan macarons.

Flexitarian is my name: I rarely eat red meat, stick to poultry, fish and seafood as much as possible – in between at least a few vegetarian weekly meals. To be a vegan means carrying on eating a deliciously crispy French baguette but cutting out all that gorgeous unpasteurised French cheese, butter, milk and organic eggs I see so often at our local markets.

I’m simply not ready to give them up yet – even although I know I want to make the change eventually.  However, I do enjoy my healthy maple oat granola or spiced granola in the mornings with almond milk and, for vegan party food, make these energy bites in the form of no-bake chocolate and fruit snowballs and salted toffee cherry tomatoes, great with a glass of rosé. That’s it, really – for now.

So why am I making these Raspberry Vegan Macarons so late in the day? I love a challenge and besides, I want to see if I can make eggless macarons using aquafaba. 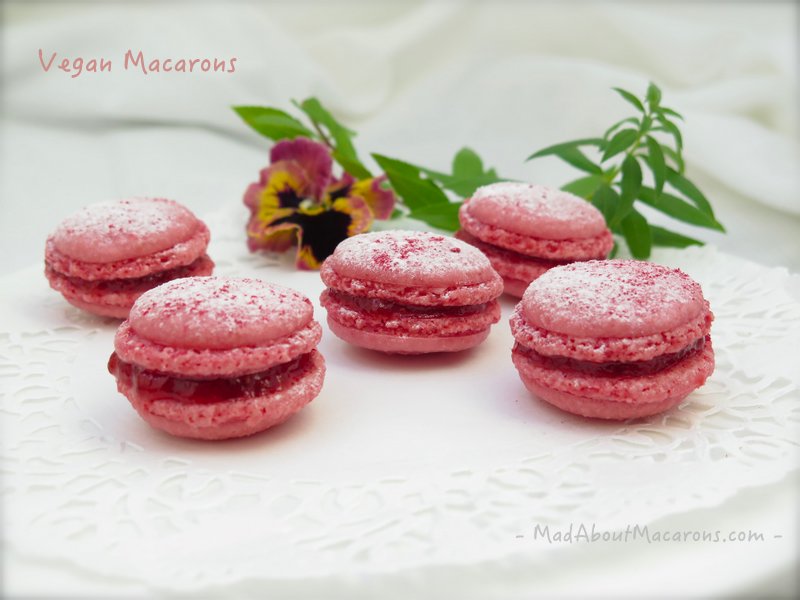 Aquafaba – it is miraculous to watch how this fancy name for the brine of tinned chickpeas or beans can go from a simple thick brown reduced liquid to a whipped up, shiny, regular-looking meringue. It looks like it’s made from egg whites but it’s easy to be fooled in the looks department: it’s entirely vegan with no eggs used!

As with my regular macaron recipes in my books using egg whites, I use the French meringue method – so no candy thermometers are needed. It’s a lot easier, producing just as good results. 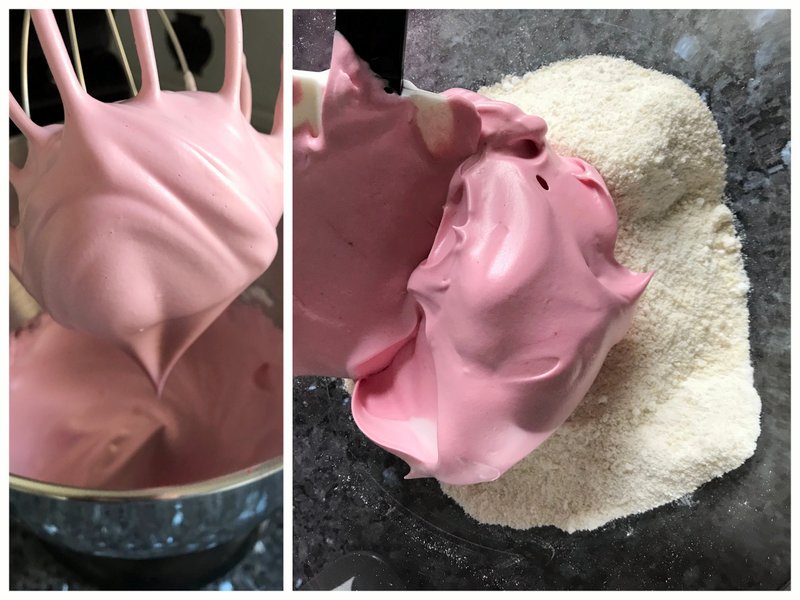 All was going well, just as I would be making regular gluten-free French meringue macarons by both my books. Once I’d completed the macaronnage (basically the mixing of the batter to eliminate air bubbles and produce a shiny texture) it looked ready to pipe out the shells, even if a bit thicker than I’m used to.

Piping out the vegan macarons mixture, the batter was indeed thicker and a bit grainier than for my regular macarons and, therefore, susceptible to having pointy tops (I shall refrain here from what I normally call them!). Apart from that, no problem. 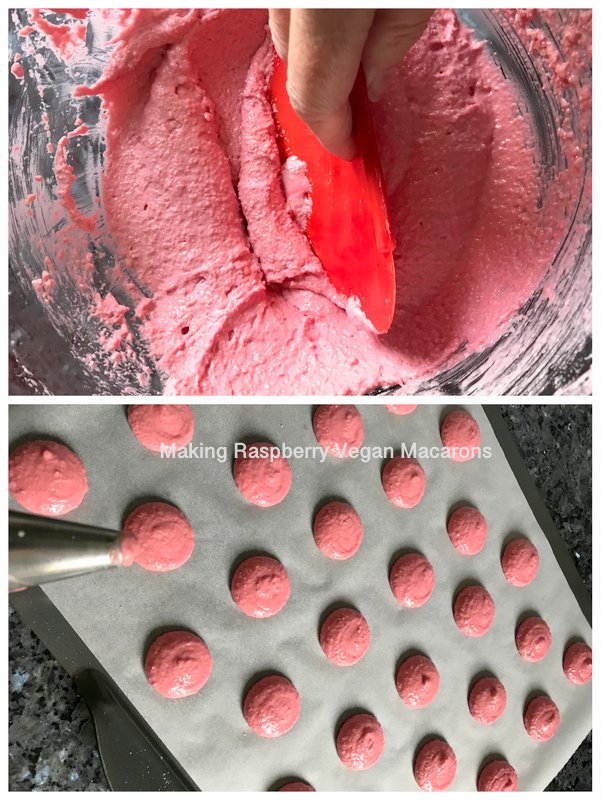 Making Vegan Macarons – Do I need to Air Them?

As for regular macarons, leave vegan macarons to sit out and air for at least 30 minutes before baking. Even using aquafaba for vegan macarons, the effect is the same: the outer layer becomes quite hard to the touch.

Once this happens, they’re ready to bake. 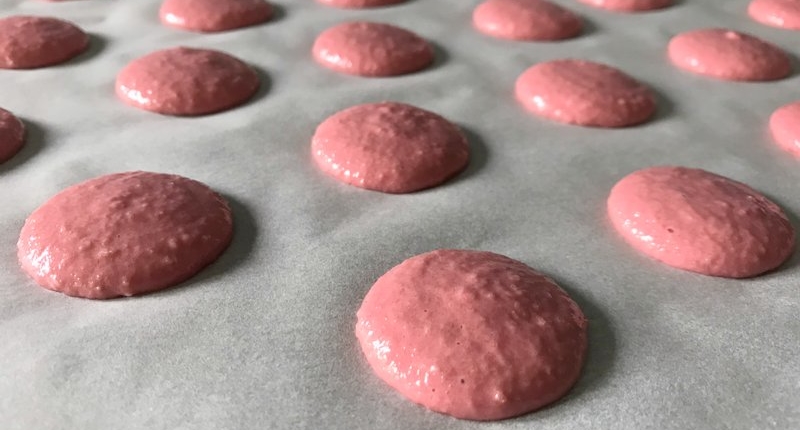 I knew that Aquafaba doesn’t like high temperatures and for making aquafaba meringue, it prefers lower temperatures much like for normal meringues. So, I reduced the oven slightly from my usual macaron temperature to 140°C fan just to try out the first batch. 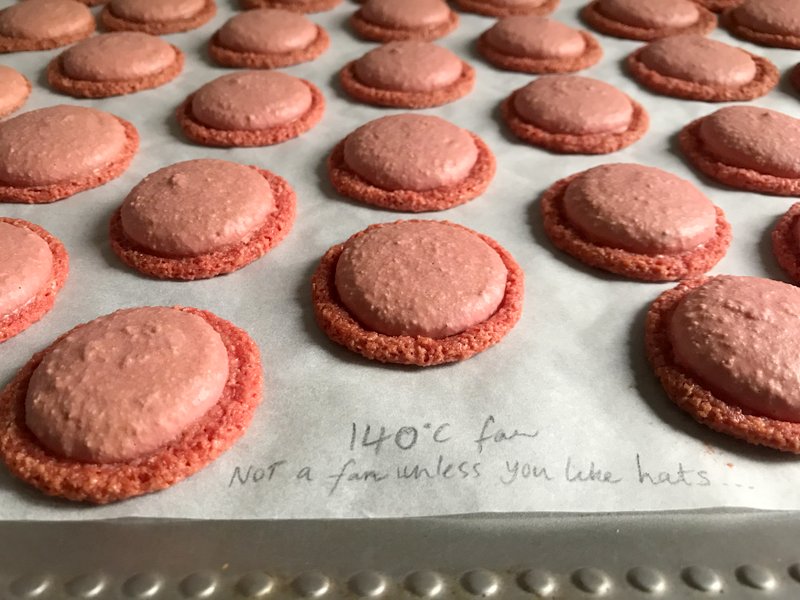 Rasbperry Vegan Macarons – Learning that oven temp is NOT the same as for making regular macarons!

Clearly that first batch wasn’t right!  The temperature was still FAR TOO HIGH.  As with making regular macarons, I bake the trays one at a time; just as well, as at least I didn’t ruin the rest of the batter! I could easily correct it by reducing the oven temperature to 110°C fan (130°C) for the next batch.

Bingo!  It worked.  For the vegan macarons filling, I personally find it’s not that easy to find tasty vegan ideas to sandwich the shells together, as I can’t use normal chocolate ganaches or buttercream. I still need time to work on this part! The easiest to hand was homemade raspberry jam – or try it with rhubarb, hibiscus & rose jam. Another easy vegan macaron filling is classic peanut butter but that would look strange with pink.

When ready to eat next day, I sprinkled them with some freeze-dried raspberry powder for that extra raspberry flavour. 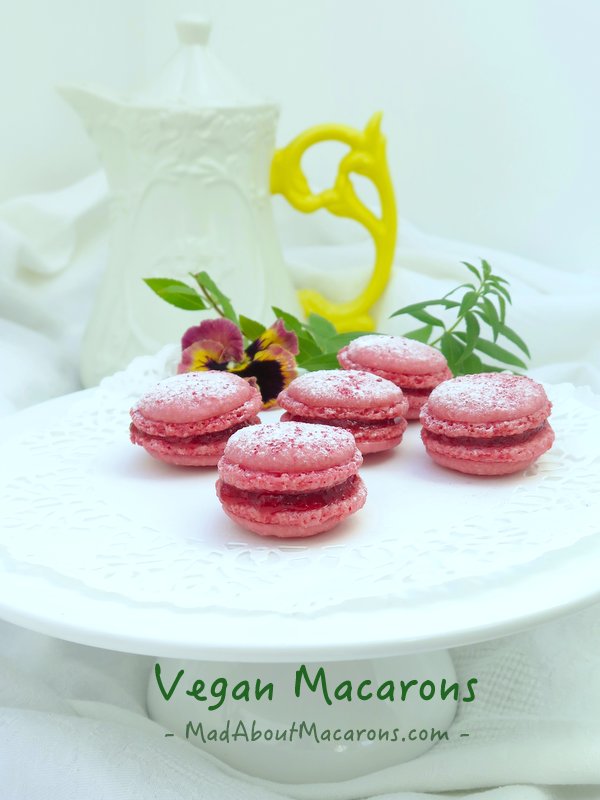 At first glance, these vegan macarons look like regular macarons using egg whites. However, they’re not quite as picture perfect compared to my classic Parisian macarons. I’m happy these vegan macarons had feet and no hollows, even if they were slightly sticky – there’s still room for improvement! I feel that the most important element in French patisserie is taste before looks. So, for vegan macarons I need to work on that part first before really working on the perfectly smooth appearance.

Their taste, however, is nothing like regular macaron shells – no matter how much you hear, “Don’t worry; it will taste better in the end”. I added vanilla powder and some natural raspberry powder, just to help it along the way for flavour points. The eventual taste of the vegan macarons shell is strange, especially with raspberry: definitely sweet but there is the “weird” sensation with the aftertaste of, well, chick peas.

Although it’s good to know we can produce vegan macarons, I’m sticking to my own traditional French-meringue macarons using egg whites for now.  That’s at least until I can work on perfecting the same kind of taste we’re used to from all these wonderful classic Parisian patisseries.

For my classic Parisian macaron recipes, you’ll find most of them in Mad About Macarons! , along with detailed step-by-step instructions with tips on troubleshooting, decorating them, making for weddings etc. – and in the chapter devoted to macarons in my latest book, Teatime in Paris.

Don’t forget that regular Parisian macarons are made with egg whites but are gluten free. 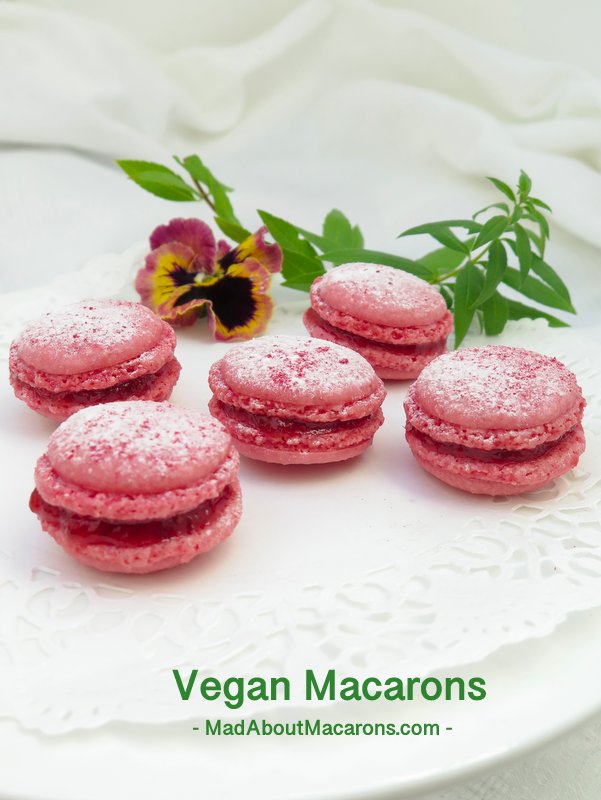 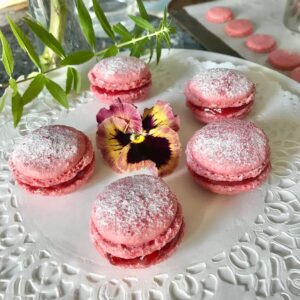 Add the leftover chickpeas to this Moroccan-style spicy Chicken & Prune Tagine, for example. For regular macaron recipes using egg whites, see the recipes in both my books, Mad About Macarons and Teatime in Paris. 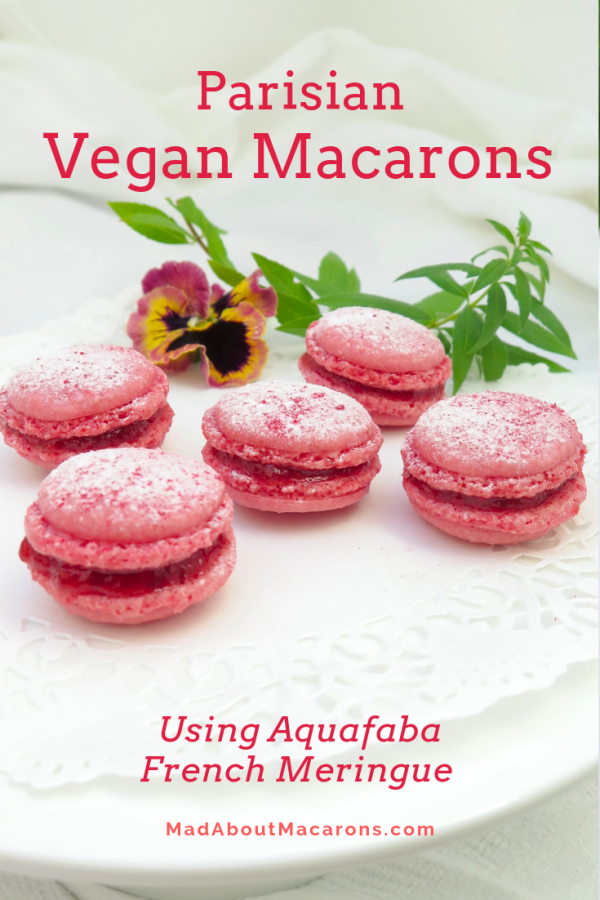