Many a Parisian knows their Bourdaloue tart. It’s a classic pear and almond tart found in many patisseries, and has been glazing around Paris since the 1900s.

My first reaction to the word, BOUR-DA-LOUE, years ago? I thought it was something you shouted in Scotland in the 18th Century before throwing out your rubbish from a high tenement building in Edinburgh’s Royal Mile! Instead – read on and you’ll discover, like me, the true story of this delicious classic French tart. 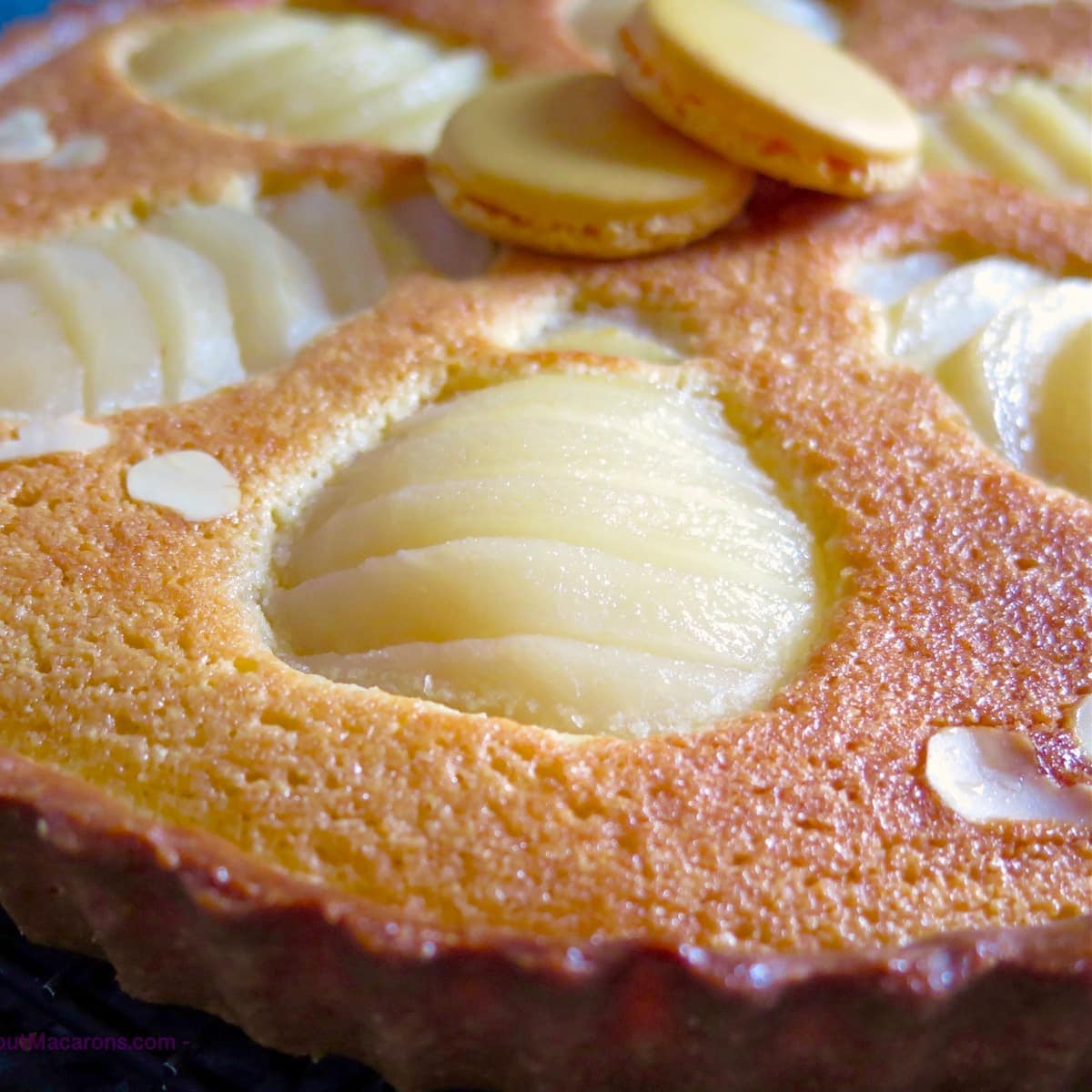 What Does Bourdaloue Mean?

Bourdaloue doesn’t mean anything in French. Instead, this pear and almond tart gets its name from a Parisian street, rue Bourdaloue in Paris’s 9th arrondissement.

To get to know the Parisian Bourdaloue Pear Tart better, I reached for Larousse Gastronomique. Translated into English it reads:

“Bourdaloue is a tart invented by a pastry chef in Paris’s Rue Bourdaloue during la Belle Epoque – composed of poached Pear Williams, drowned in a vanilla frangipane cream, covered in broken macarons and finally glazed in the oven.”

Who was Bourdaloue in Paris?

As the streets in Paris are mainly named after famous personalities in French history, it’s always interesting to look up the street names themselves.

So who was Bourdaloue? Louis Bourdaloue was a French preacher – so eloquent, sharp and popular amongst all classes that King Louis XIV ensured he booked him to preach from the pulpit at the court of Versailles. 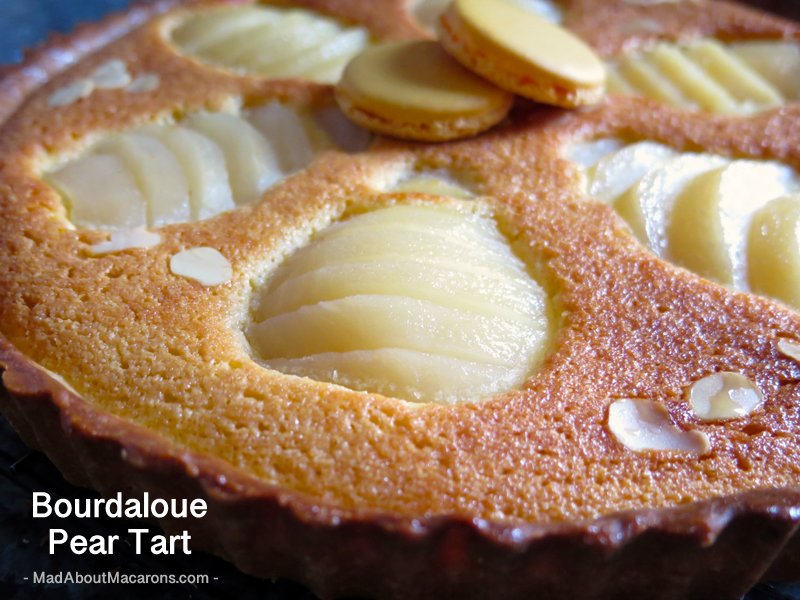 What’s in a Bourdaloue Tart?

These above words for the tart’s definition, “drowned in a vanilla frangipane cream” has me glazed over myself. But who knew it was also traditionally covered in broken macarons? All versions I see from this tart in Paris patisseries are covered simply in slivered almonds. I’m not keen on breaking macarons – perhaps for a macaron tiramisu – so let’s top with some shells. Now for the tart!

The frangipane cream filling is often made using a mix of both an almond cream and crème patissière (pastry cream). While this is absolutely delicious, for this recipe I prefer cutting corners: I skip the pastry cream step and make an easy almond cream adding a dash of good, dark Jamaican rum.

I’m sure the pears won’t mind being drowned in that. After many tastings of the tart in Paris and trying it out at home, I’m happy with this version. 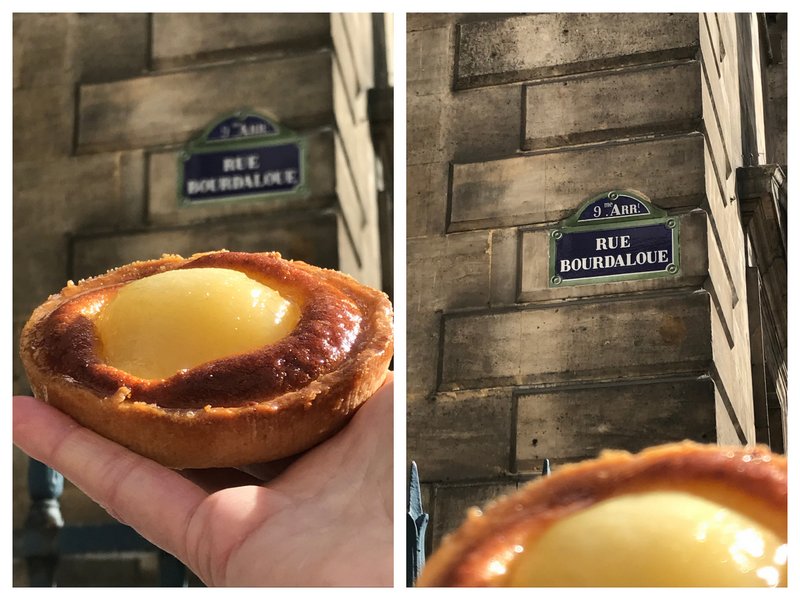 Just after I took these photos in the pear-fect street of Rue Bourdaloue in Paris’s 9th arrondissement, I bit into this tartlet. The filling fell straight out of the soggy base. Frankly for the price, it was disappointing and not the freshest of pastries that day.  It can happen but it’s incentive at times to make homemade. 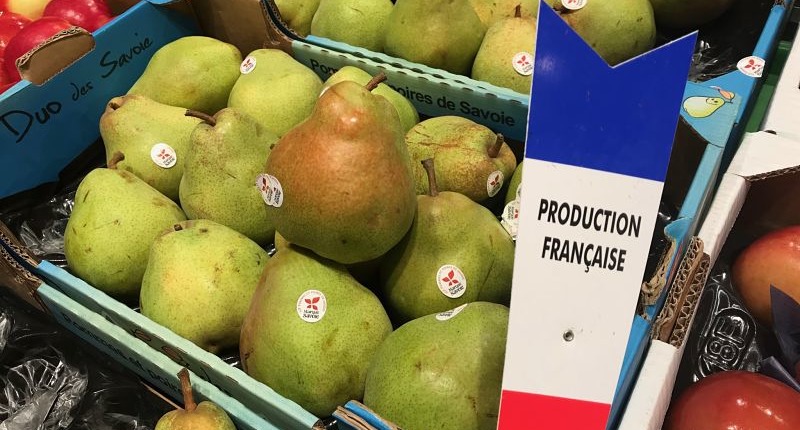 What Kind of Pears are Used for the Bourdaloue Tart?

The kind of pears used for a pear and almond tart is pretty flexible. As from Larousse, I’ve made this tart using Williams, Comice and Conference. (These are also good for poaching pears from scratch – see this recipe for Poached Pears in Coffee and Vanilla for the method).

I’ve even tried using fresh pears without the pre-poaching: just act quickly and sprinkle with some lemon juice to prevent them turning brown but it’s a bit risky and you have to work fast.

So pick pears that are not yet ripe but not brick hard either. Slightly soft yet firm is perfect.

For much more on pear varieties for desserts, see the Market Produce page on pears.

This recipe, however, is based on the one in the Larousse French Book of Desserts, which uses tinned pears in syrup. If Pierre Hermé can do it in his recipe version, I don’t feel too bad at cutting corners here with tinned! It’s so much easier and just as tasty (incidentally, this is a rare occasion when tinned works well).

However, if you’re following a professional pastry diploma like the French CAP Patisserie, then you wouldn’t use tinned pears. After baking the tart, mix an egg yolk with water and brush it on to the pastry sides and bake for a further couple of minutes. Then you’d make a fancy nappage glaze to polish it all off.

Can Pear and Almond Tart Be Frozen?

Pear and almond tart can keep for a day at room temperature or for up to 3 days if stored covered in the fridge.

It also freezes well. Consume within 6 weeks, as otherwise it loses its lovely flavours. 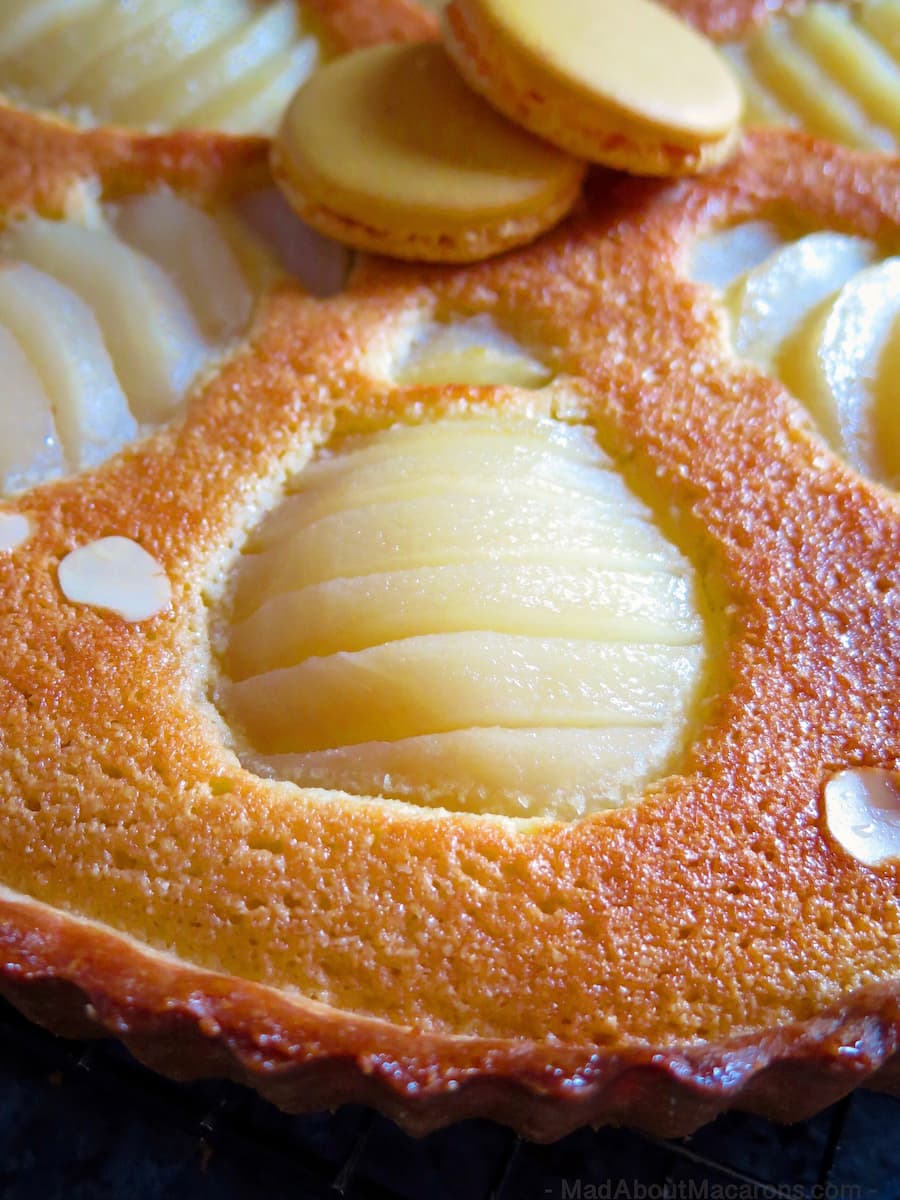 How to Make a Parisian Bourdaloue Tart

However, for this easier recipe, just brush with about 4 tablespoons of slightly warmed apricot jam after the tart comes out of the oven. I recommend making your own pastry (I use my favourite one from the tart chapter in Teatime in Paris) but if you’re short for time, use ready-made shortcrust pastry (pâte sablée). 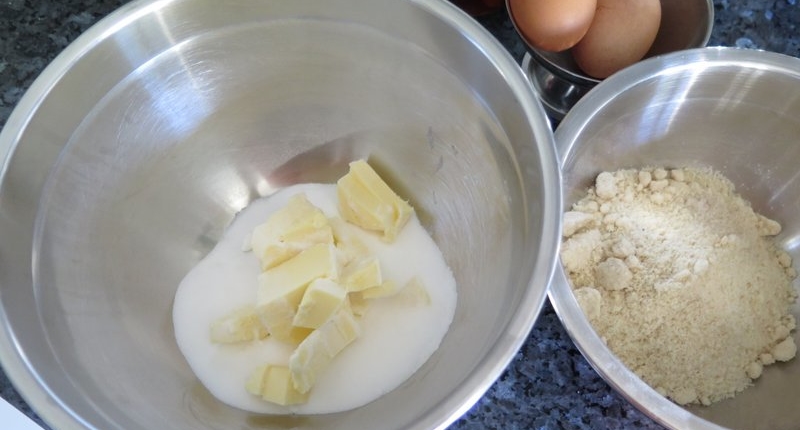 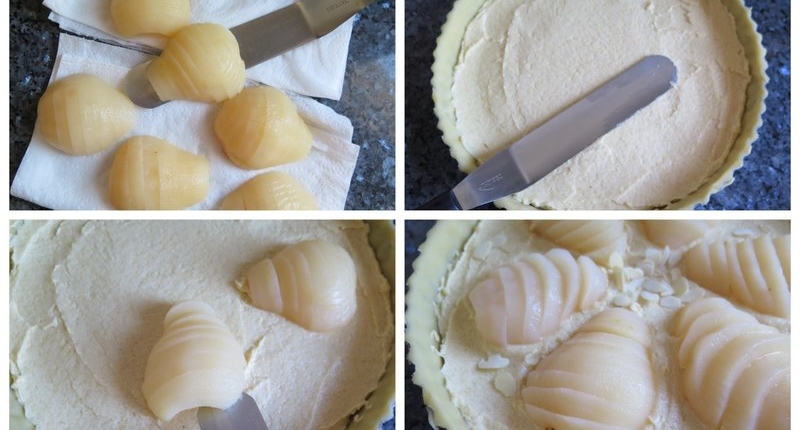 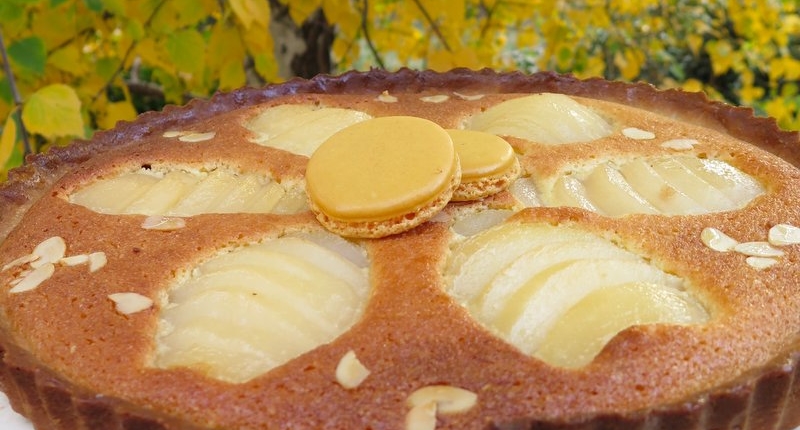 So next time you roll your French tongue around Bourdaloue, think pear & almond tart, Louis the preacher, and the street named after him where the pastry was created in the 1900s in the 9th arrondisement. 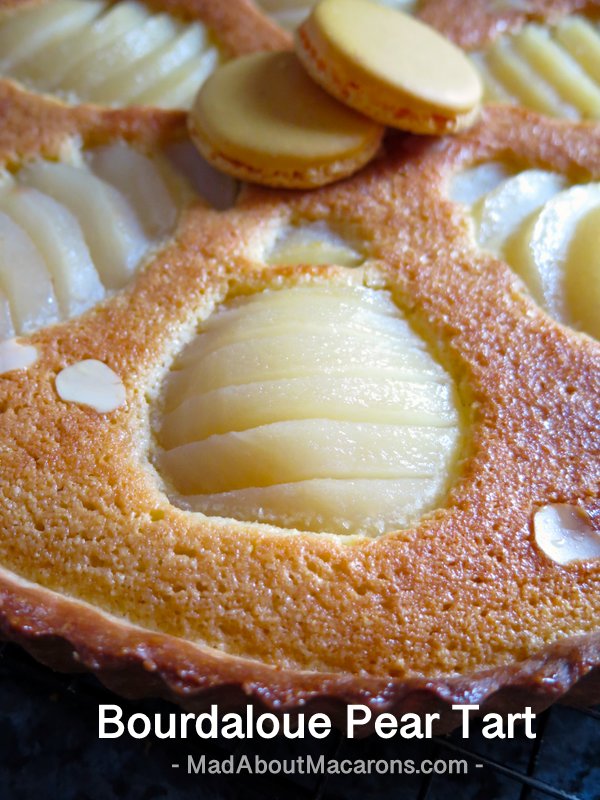 This tart is also delicious served with lemon verbena ice cream – discovered recently on our road-trip holiday in a restaurant in Narbonne. 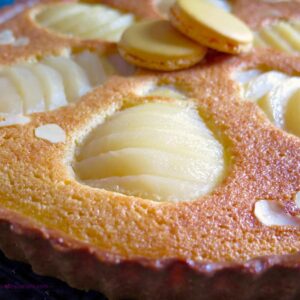 Bourdaloue Almond Pear Tart, named after the Parisian street where it was invented in the 1900s. A shortcrust tart base filled with Williams pears and almond cream, glazed and topped with slivered almonds and macarons.

Nutritional Information: 387 calories per serving; 6g protein; 29g carbohydrates; 26g fat. For more detailed instructions on the tart's pastry, see the tart chapter in my book, Teatime in Paris. Measures: Please note that all my recipes are best made using digital kitchen scales in precise metric grams. Both ounces (and cups) are given as an approximate guide.

This post was first published 8th December 2018 but has now been updated with a printable recipe and updated text.

Have you made and enjoyed this recipe? Please leave a rated review below. It means so much for your support.