Authentic and easy Béarnaise sauce recipe, inspired from its origins where the sauce was invented in Saint-Germain-en-Laye near Paris in 1837. Read on to discover the difference between a Hollandaise sauce, what it goes with, plus the authentic recipe, its ingredients and history from France. 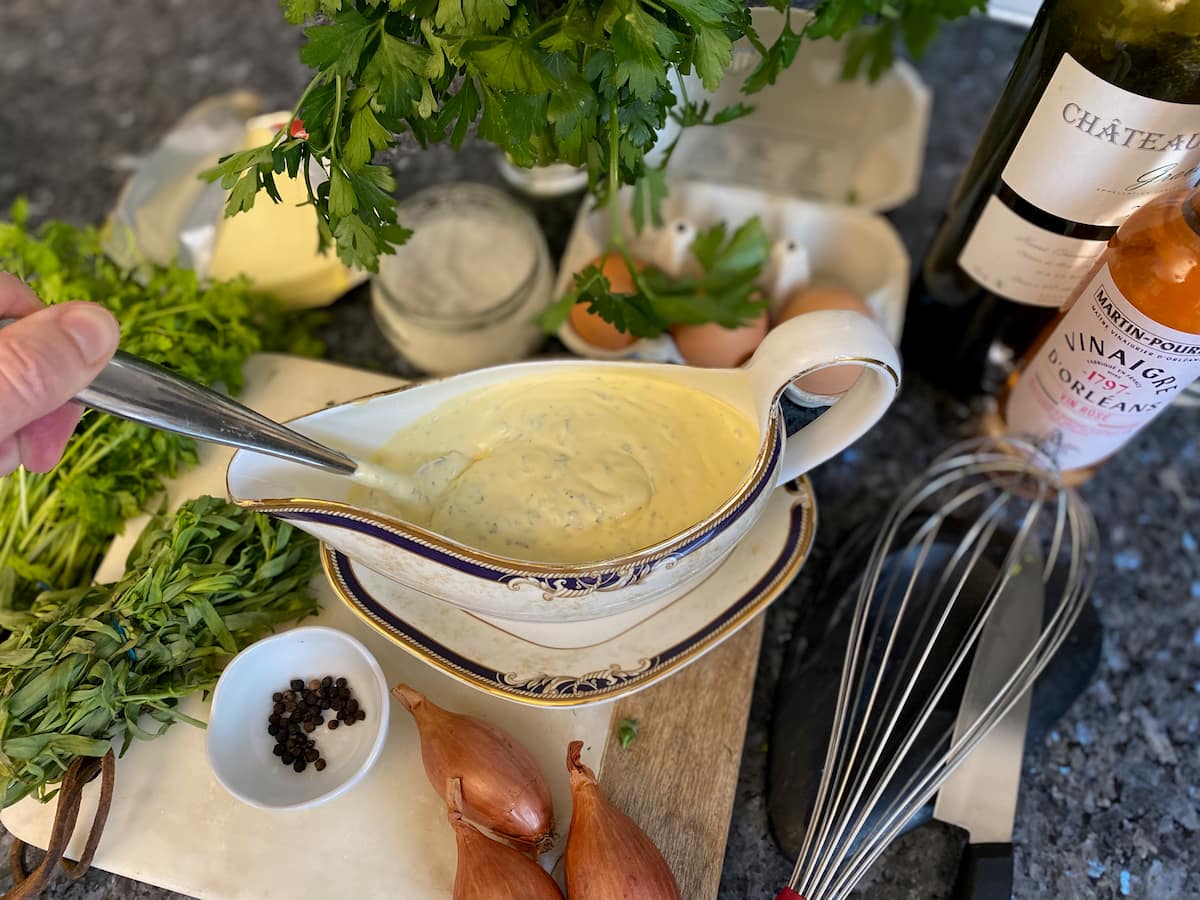 Homemade Sauce is So Much Better than Buying Industrially Made

How many times have you seen the French classic Béarnaise Sauce on a menu and thought it was too difficult to make? Well, let me show you how easy the recipe is to whip up an authentic version at home. It also tastes 10 times better than the jarred stuff in supermarkets!

So how do you make a bearnaise sauce from scratch? Use quality ingredients. By that I mean fresh, organic eggs and only fresh herbs – not freeze dried or dried in any way. The taste will not be at all the same. 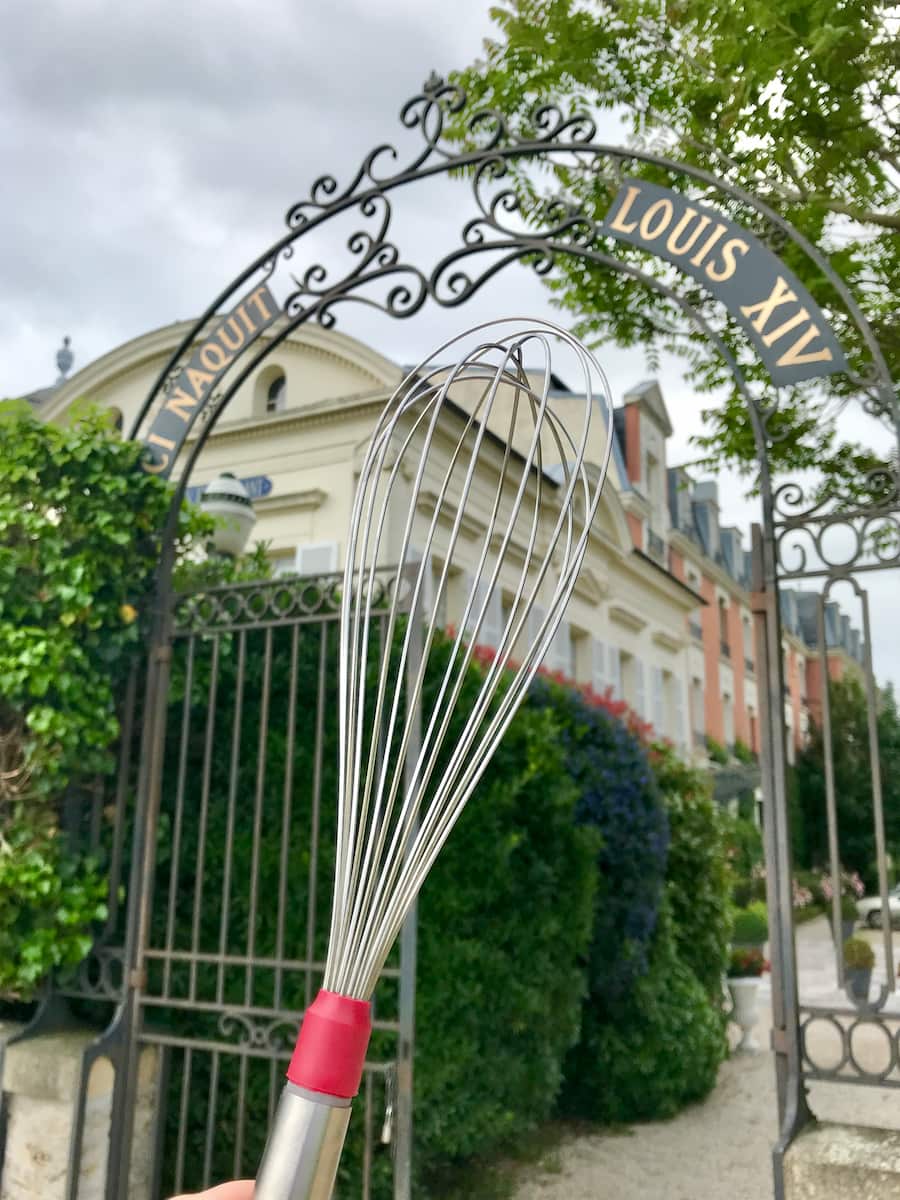 Where Does Béarnaise Sauce Come From?

Why the name, Béarnaise? It didn’t come from the French Province of Béarn. Likewise, it has nothing to do with the French Béarnaise cows from the Pyrénées.

Instead, the sauce was born at Le Pavillon Henri IV, a hotel in Saint-Germain-en-Laye, just outside Paris, which was built over the original spot of the Château Neuf, where Louis XIV was also born in 1638.

For more history on this part, see my introduction to Saint-Germain-en-Laye.

In August 1837, for the inauguration of the Paris-St-Lazare to Le Pecq’s steam train line, the Pavilion Henri IV was given the opening banquet. Head Chef Jean-Louis Françoise-Collinet was making a shallot reduction. As it went wrong, to correct it he added butter to make an emulsion. In the end, he took the basic recipe for Sauce Hollandaise, replaced the lemon juice with white wine vinegar, shallots, chervil and tarragon and the Sauce Béarnaise was born.

Why is it Called Béarnaise?

Why did chef Collinet call it Béarnaise? The local story (from our tourist information guides) goes that he was first inspired by the name of the hotel, Henri IV. The hotel was King Henri IV’s previous home at the Château Neuf long before it was a restaurant.

So, when he was asked by the clients what the sauce’s name was, the Chef immediately took inspiration from the hotel’s bust statue of Henri IV in the restaurant. As Henri IV came from the province of Béarn and known as Le Grand Béarnais, the chef named the sauce after him. Except la sauce is feminine, changing it to an ‘e’ on the end!

The chef also accidentally invented the soufflée potato (pommes soufflées) and served both of his creations at the opening. What a way to kick off a culinary event! 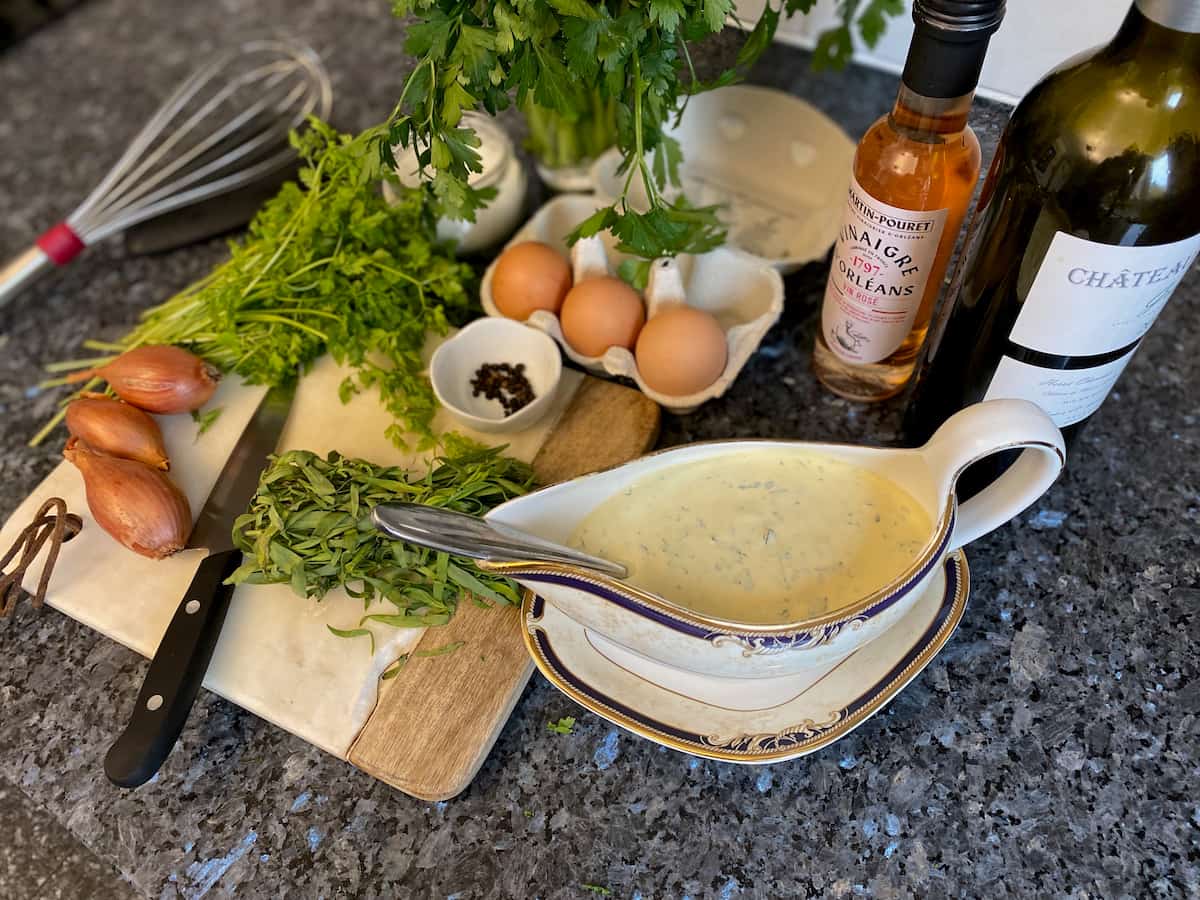 What is the Difference Between Béarnaise and Hollandaise Sauce?

In the 1800s, Chef Antonin Carême taught us that in French cuisine, there were four basic sauces – each called a “Mother Sauce”.

Later, Auguste Escoffier took Câreme’s rules of Haute Cuisine a step further by adding a basic fifth sauce. This fifth mother sauce, called Hollandaise was classed by Escoffier, even although it was created around the time of Louis XIV during the French war with Holland. So what is Hollandaise?

What It Doesn’t Contain

Many recipes mistakingly add mustard or spices (some even add Tabasco!) or herbs such as oregano. Please don’t add any of them! Not only do they not belong in the ingredients, they change the flavour completely.

It’s important to enjoy the taste of the fresh herbs and keep to the classic French Béarnaise sauce. So an authentic Béarnaise does not contain lemon juice, cayenne pepper or Tabasco.

However, replace the tarragon with mint and you have a Sauce Paloise.

It has the same creaminess as the basic hollandaise but a subtle acidity from the vinegar. Béarnaise sauce’s flavours are much richer and more pronounced than a classic mayonnaise or the Hollandaise. This is from the fragrant addition of three ingredients:

The tarragon in particular lends a sweetness and aniseed or liquorice taste to the sauce. It’s the tarragon and white wine vinegar that makes that fragrantly addictive acidity that we associate with the star of sauces with steaks. 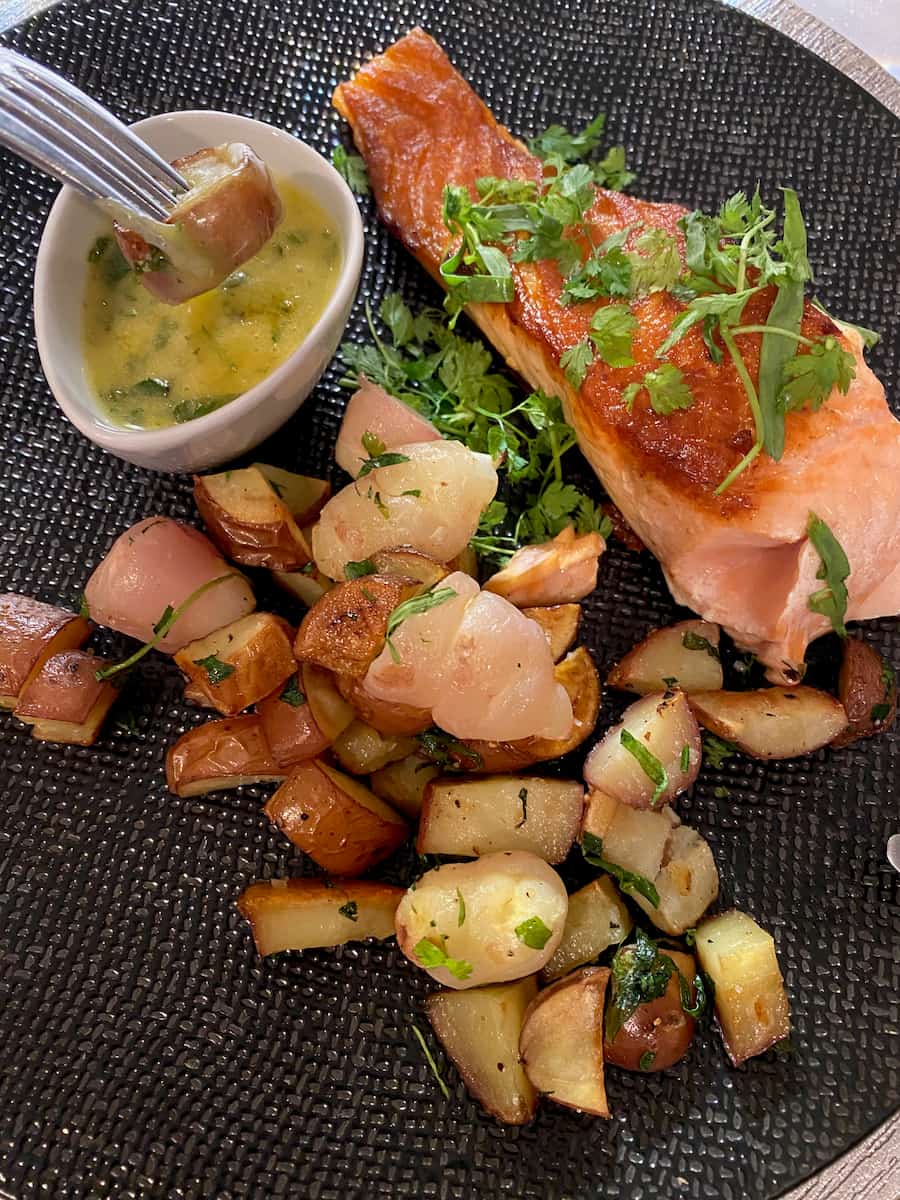 What Does Béarnaise Sauce Go With?

Moreover, if you love Eggs Benedict, you’ll know that poached eggs marry well with Hollandaise sauce – but try it with smoked salmon instead of ham and Béarnaise sauce is divine, with its added fresh herbs. It’s a classic with an extra classic twist! 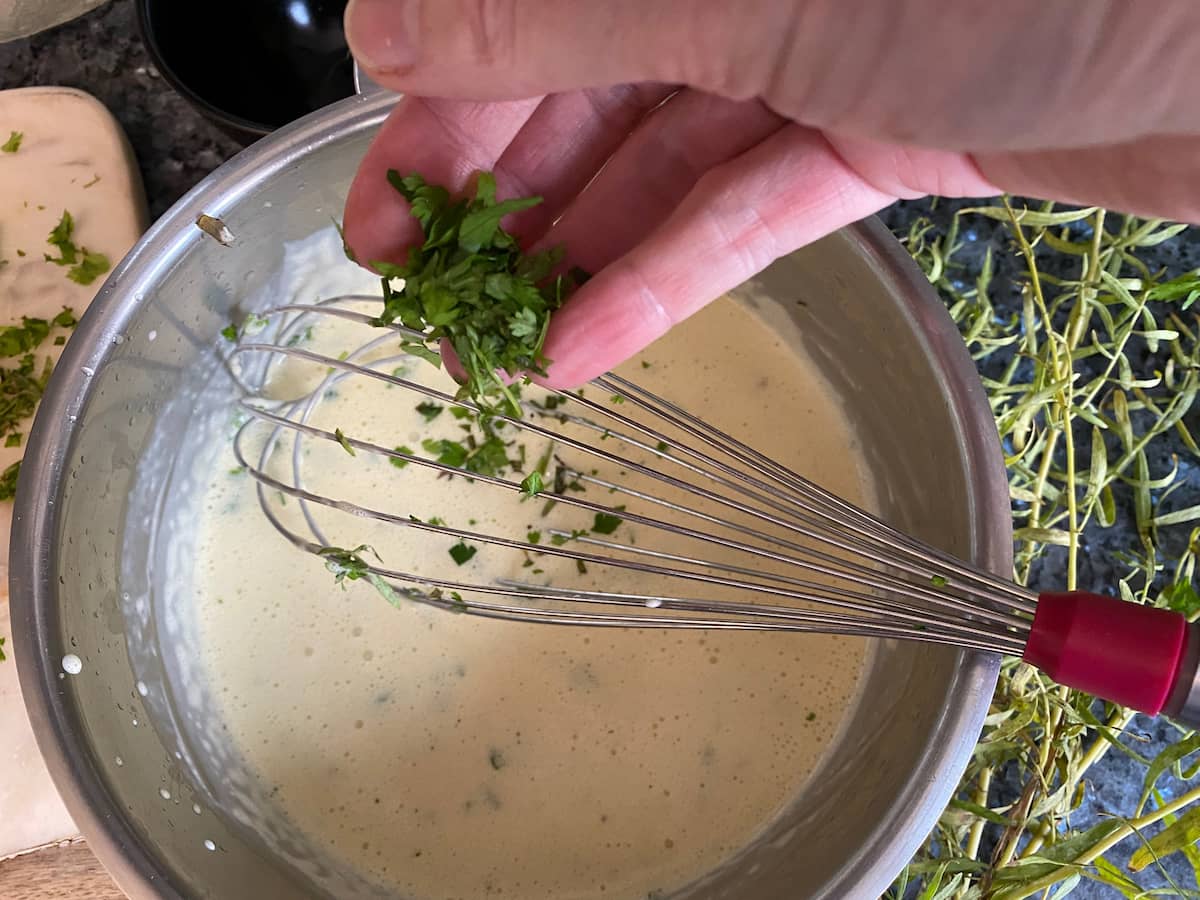 The hotel’s executive chef, Patrick Käppler, has posted the Béarnaise Sauce recipe in French, published by the Hotel Pavillon Henri IV, without the actual quantities.

As you can see, to continue the sauce’s tradition, the chef primarily makes it with the classic tarragon (estragon) herb  – but also adds chervil (cerfeuil) and a little parsley (persil) added at the end of cooking.

Following my challenge from L’Office de Tourisme in les Yvelines, this Béarnaise Sauce recipe was also cited by the novelist, Alexandre Dumas (père).  Famous for his Three Muskateers and The Count of Monte Cristo, as a serious gourmet and cook, he published his Grand Culinary Dictionary at the end of his life.

Dumas cites ‘using a good vinegar from Orléans‘, uses oil instead of butter and parsley or tarragon: 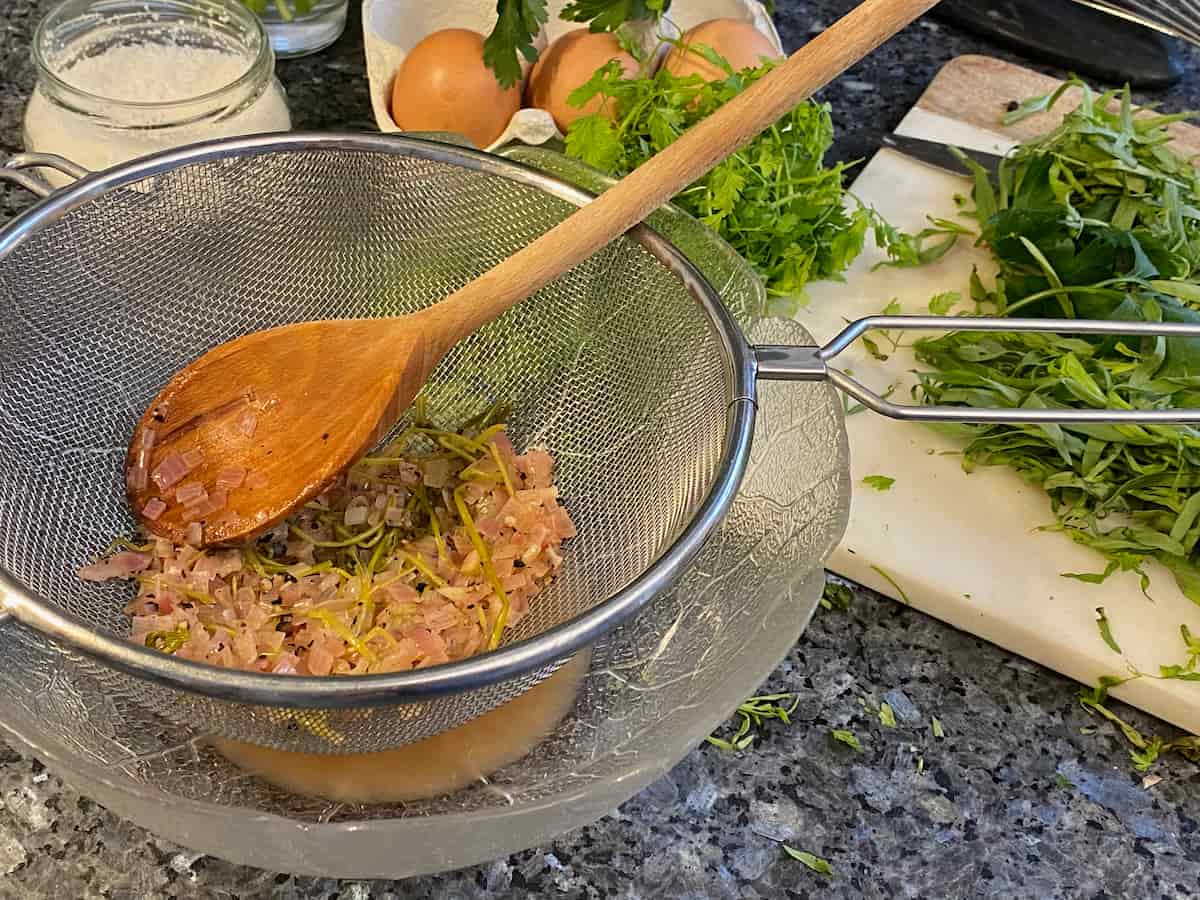 Meanwhile, prepare the clarified butter. I don’t bother filtering it or any fancy methods. Here’s how: 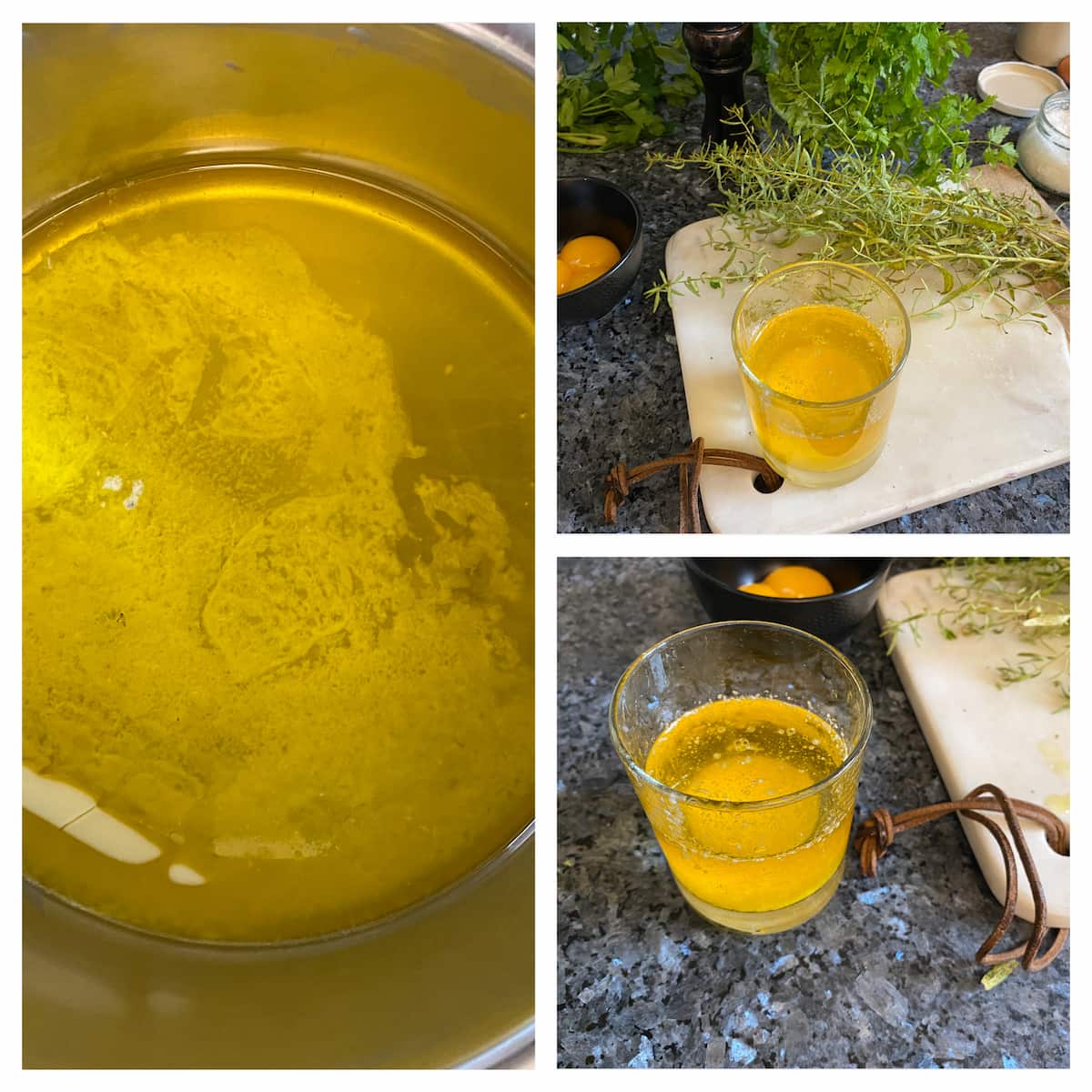 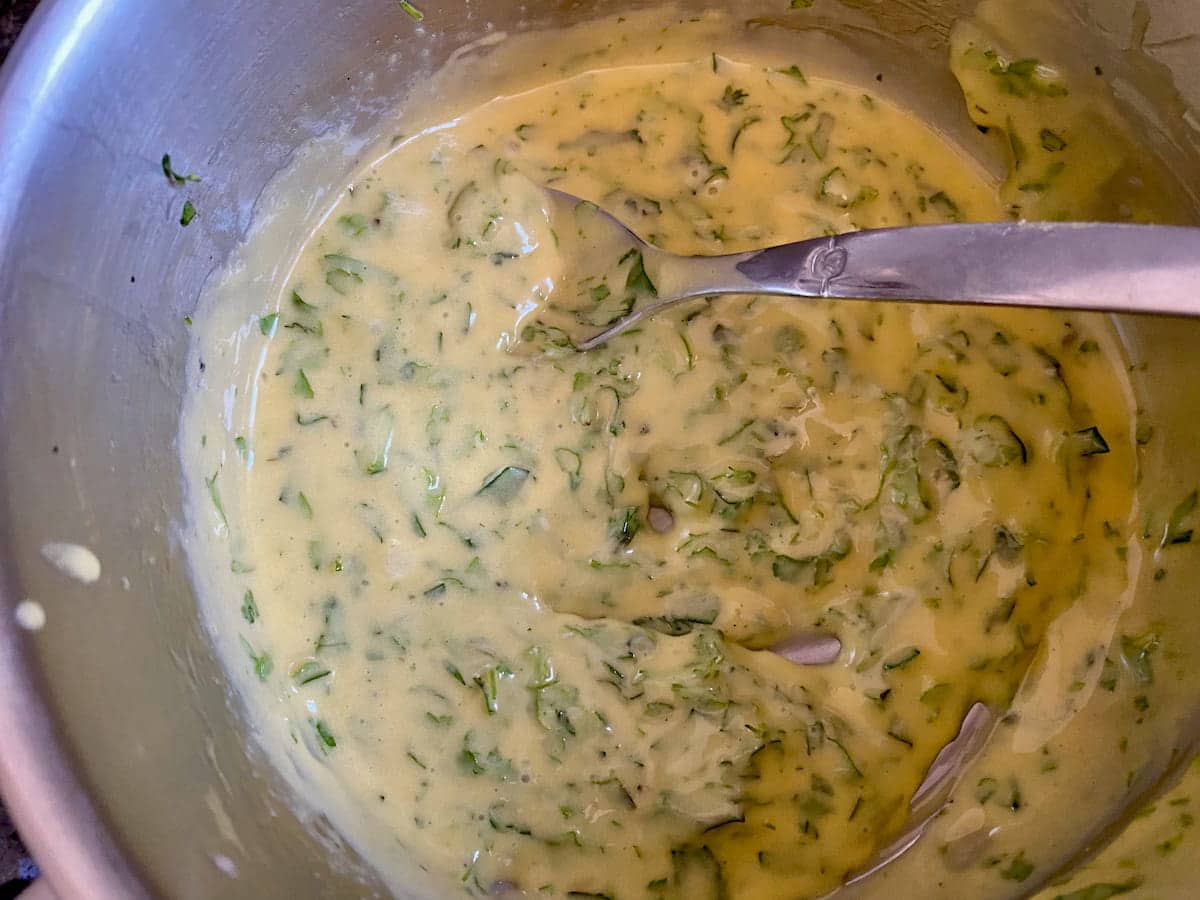 How to Reheat Béarnaise Sauce

Béarnaise sauce is best when made as close as possible to serving.  Ideally I’m not a chef serving this in a restaurant so I don’t have these kind of worries at home but I hear the best way to keep Béarnaise sauce without it splitting is by keeping it in a thermos.

Many chefs make this straight in the pan (just like Dumas describes above) and also reheat it directly in the pan. If you are afraid of making the sauce split (this doesn’t happen if you follow the recipe to the letter), then reheat the sauce over a double boiler (whisk in a bowl over simmering water).

I conclude that, after trying both ways, it’s so much easier to reheat directly in the saucepan – as long as it’s over a very low heat.

Troubleshooting tip: if the sauce gets too hot and starts to split, add a little warm water. Frankly, I’ve not had problems with the latter, as the recipe is so easy and as long as it’s served reasonably quickly, the results are light and fluffy.

Once cooled, the sauce can keep in the fridge for 24 hours. 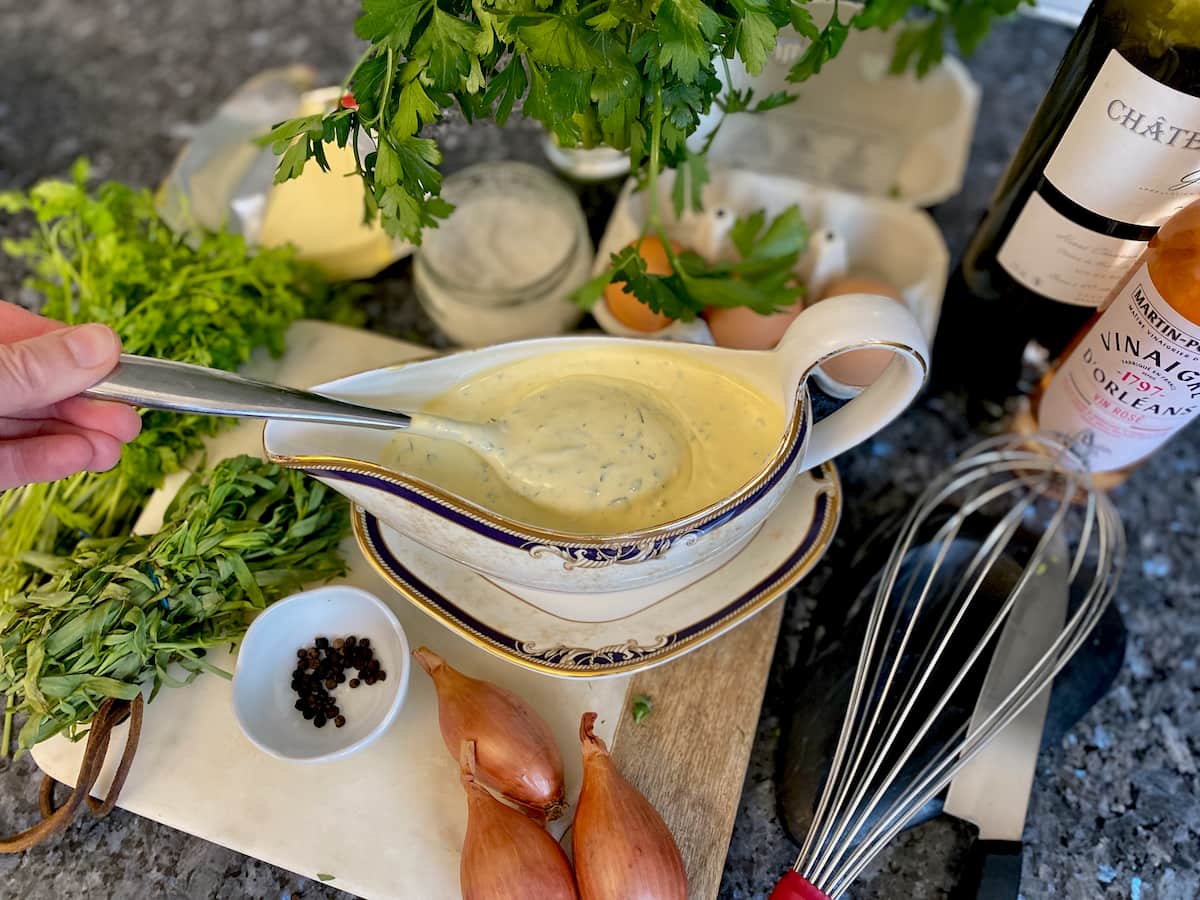 The simple Béarn-aise-sauce-ities of life
They’ll come to you … (I’m proud of that pun! Sing it with me)

Video upcoming soon from Saint-Germain-en-Laye.
Sign up to the Newsletter below to be informed when it comes out! 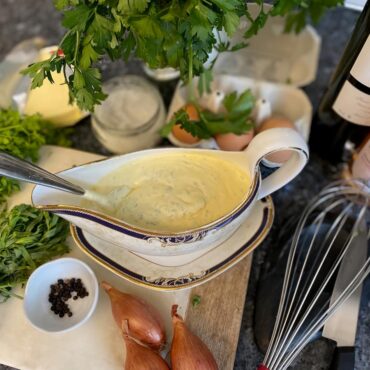 Authentic recipe for the classic French Sauce Béarnaise, with added herbs to the classic ingredients of its mother sauce, the Hollandaise. Created in the 1830s near Paris, in Saint-Germain-en-Laye. Perfect accompaniment for steaks, salmon, chicken, potatoes or asparagus.

How to Serve: ideally, this sauce should be made as close as possible to serving.
If planning on making this much later in the day, prepare the sauce reduction in advance and only the rest of the ingredients. Keep at room temperature (off the heat) and when ready to serve, reheat by whisking in the pan over a very gentle heat. Measures: Please note that all my recipes are best made using digital kitchen scales in precise metric grams. Both ounces (and cups) are given as an approximate guide.

This recipe was first published 3 June 2019 but is now completely updated.

More About the Sauce’s Birthplace