If you know me by now, wine and I are more than just friends.  So, when you live within 3 hours’ drive from Paris to Burgundy, the January Galettes des Rois have been baked, tried and tested, and good friends ask you to join them for the annual wine festival, what would you do? 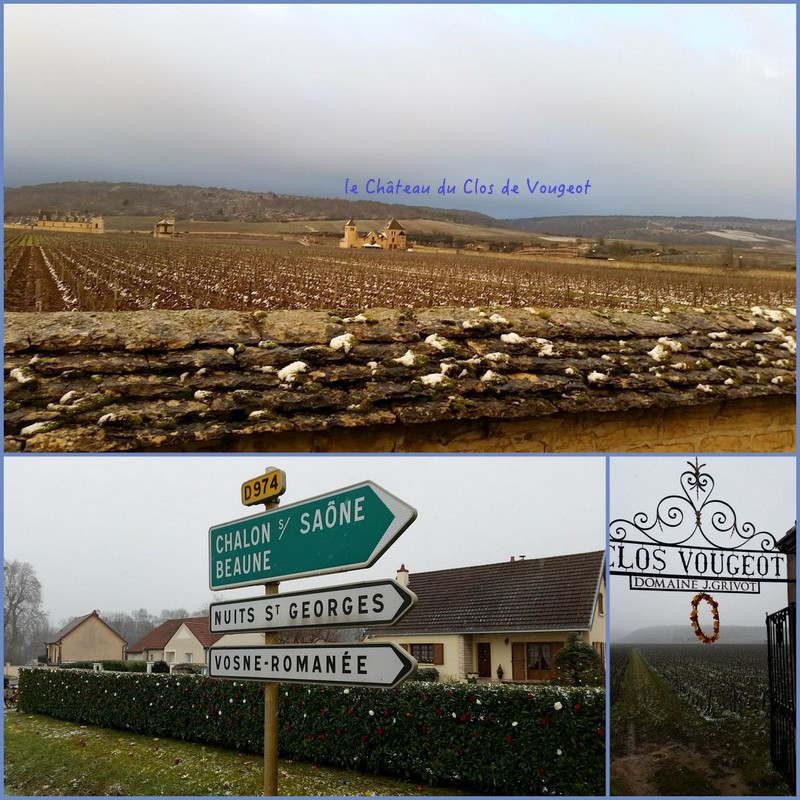 According to the New York Times, Burgundy is one of the top 15 destinations to travel to in France.  I say Burgundy, but let’s say Bourgogne. If you follow the blog, you’ll remember about the Fête de Saint-Vincent Tournante in Saint Aubin last year – so I’ll not repeat about the festival’s history and background.  This year the 71st wine festival took place in two tiny villages of the Côte de Nuits: Vougeot and Gilly-lès-Cîteaux between Dijon and Beaune.

Before the Fête started on Saturday, we kicked off the weekend for dinner.  Last to arrive at the Château Tailly (that’s what happens when you leave at 4.30pm from Paris – it takes an extra hour just to drive out of it!) our lovely friends thankfully saved some Crémant de Bourgogne apéritif and we quickly dumped our bags in the Hemingway room.  Oh, to drop everything and live like a lord and lady for the weekend… Château Tailly is a Gîte de France and a wonderful, welcoming place to stay in Bourgogne. 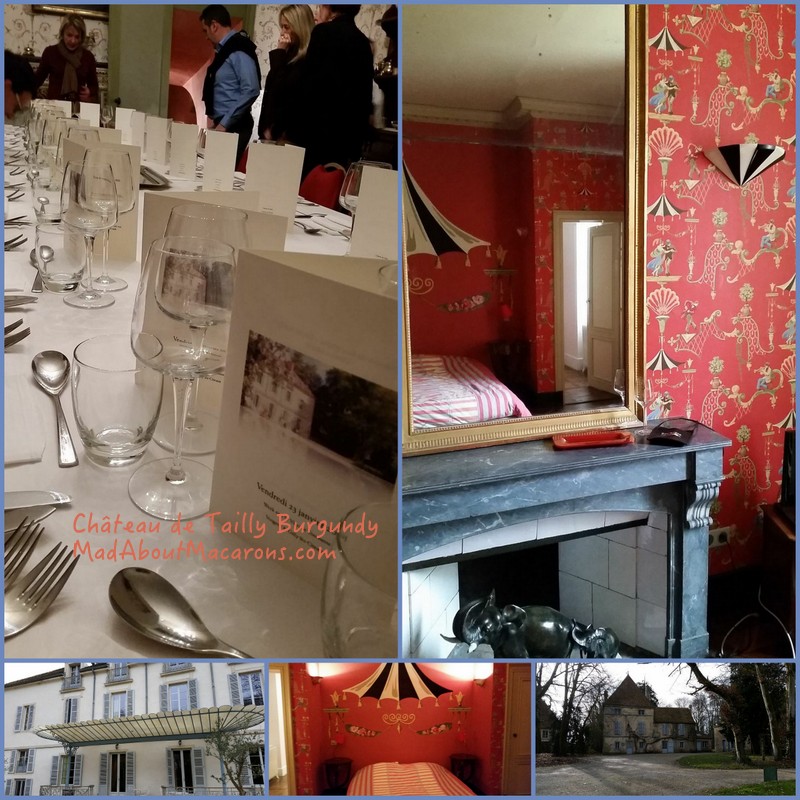 Like last year, our weekend was organised by our good friend, Hervé, who is Master of Organisation Extraordinaire and thrives on it.  Toma Le Courbe, our talented chef, prepared a meal around a lobster theme: starting with a lobster claw risotto to accompany a Rully 1er Cru.  This was toe-curling!  I am definitely adding more sauce from now on to my risottos. His secret?  A dash of Cognac, tarragon and nigella seeds.

Main course was lobster tail and scallop with lightly spiced bulgur and a velvet crab (étrilles) sauce.  The best wine with this was Jean-Pierre Guyon’s Nuits Saint-Georges white (pinot blanc) – a rare occasion to enjoy this, as it’s normally a red wine.  The cheese course was a typical speciality of Burgundy – more on this with a recipe to come soon. 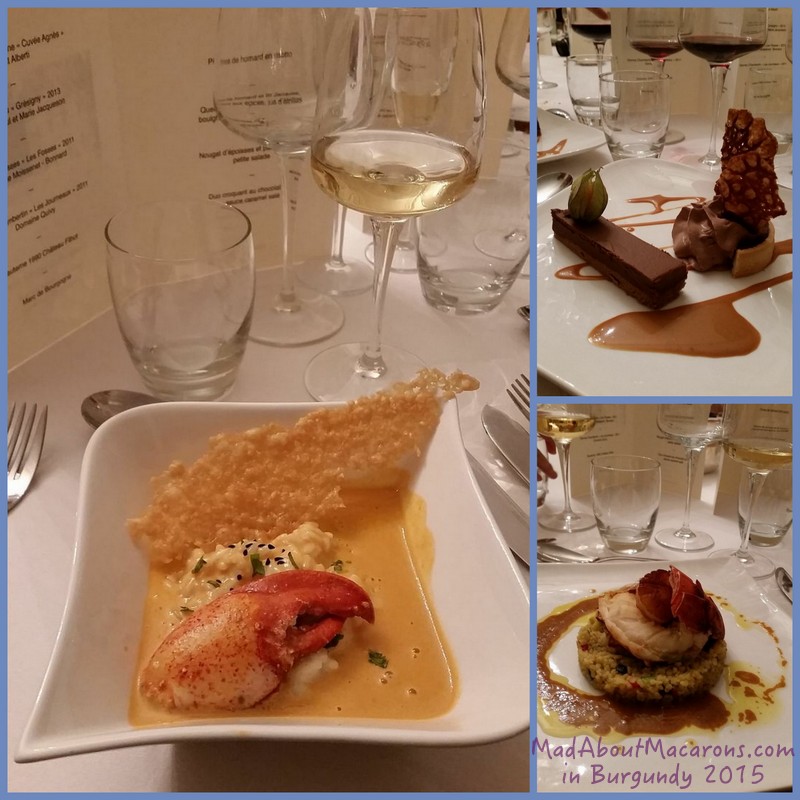 Next morning the Ceremony officially started at 6.30am –  Chefs Toma and Marie were already bravely serving for the festival.  As the procession took place amongst the winemakers and the red-golden-robed Chevaliers de Tastevin, we visited our high profile but down-to-earth winemaker friend, Jean-Pierre Guyon.

He took us through his legendary wine tastings directly from the cellar in Vosne-Romanée.  It’s not that his winery is on the national road (la route des Grands Crus – D974) and only 20 minutes walk to Vougeot, but Domaine Guyot’s wines happen to be some of the best and purest of nectars in Burgundy. 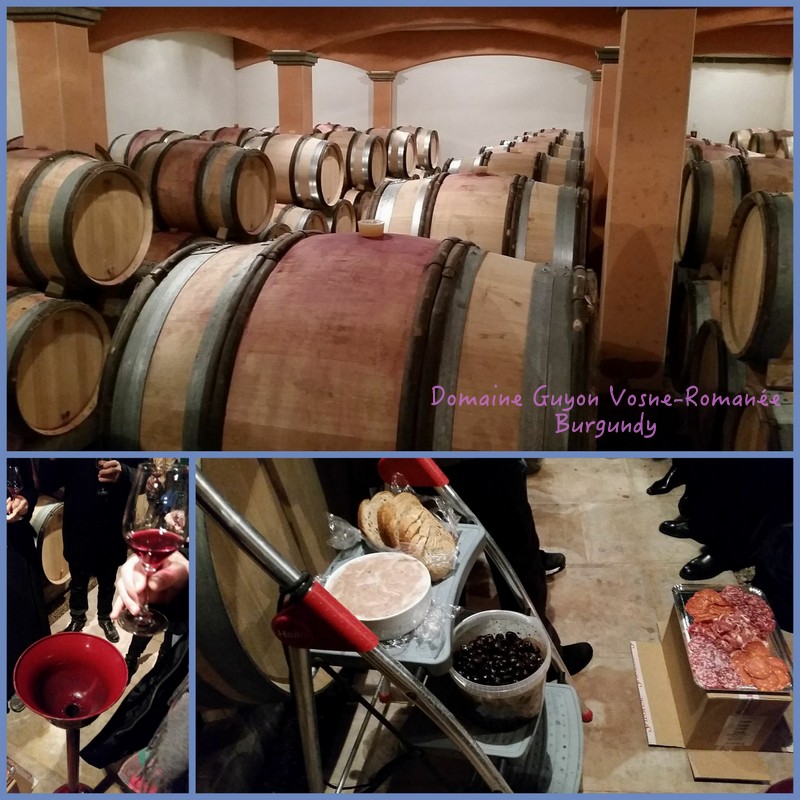 Starting from the basic of Bourgogne reds, through to other Grand Crus such as Gevrey Chambertin, we finished off with the festival’s stars, the Clos de Vougeot and Echezeaux 2013 – still in barrels and not yet ready but boy, the flavours!

If it was a blind tasting, I was convinced I was drinking a white Mersault rather than a red Clos de Vougeot (although Mersault is not that far away from here.)  The flavours of cream and soft vanilla opened up in the mouth 10 seconds later – and that was only 2013!  Top of the ladder’s lunch was the most exquisite rillettes pâté.  Needless to say, I used the spittoon if I wanted to get through the day!  Although a couple of Grand Crus ‘accidentally’ slipped down – how on earth can you spit that out? 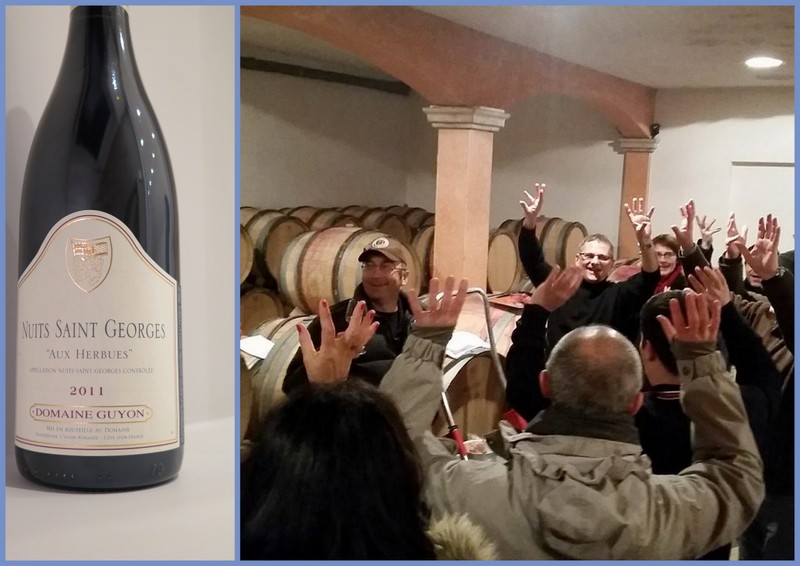 Finishing with hands in the air with the traditional Ban Bourguignon song to thank Jean-Pierre, it was time to walk to the Fête de Saint-Vincent Tournante. Luckily I was wearing long-johns and extra thermal gloves since it was absolutely freezing!

The vines dusted with snow sprinkles, take a look at the rich soil or terroir.  With 100 appellations in Bourgogne, the Côte de Nuits has 13 Grands Crus appellations.  For this event, the Grand Crus stars were both Clos de Vougeot and Echezeaux.  What’s so incredible about the wines here is that the terroir is so different in one area to the next so, even although one appellation can be near to the other, the tastes of the wines can be so varied. 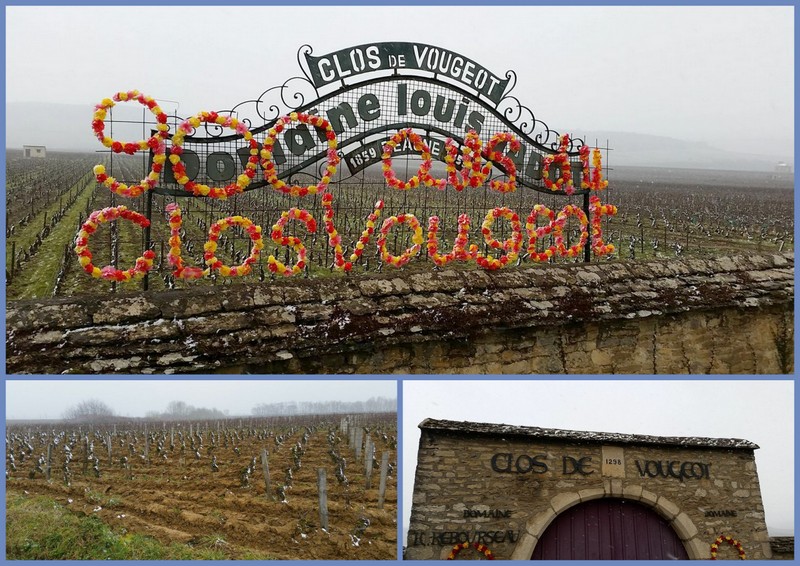 The history of wines here stretches back 900 years when the monks constructed buildings around the vineyards.

Here it wasn’t uncommon to see 1298 like this, written on buildings. The theme this year was therefore, “On the Monks’ Trail”.  Spot the monks propped up around the two villages… 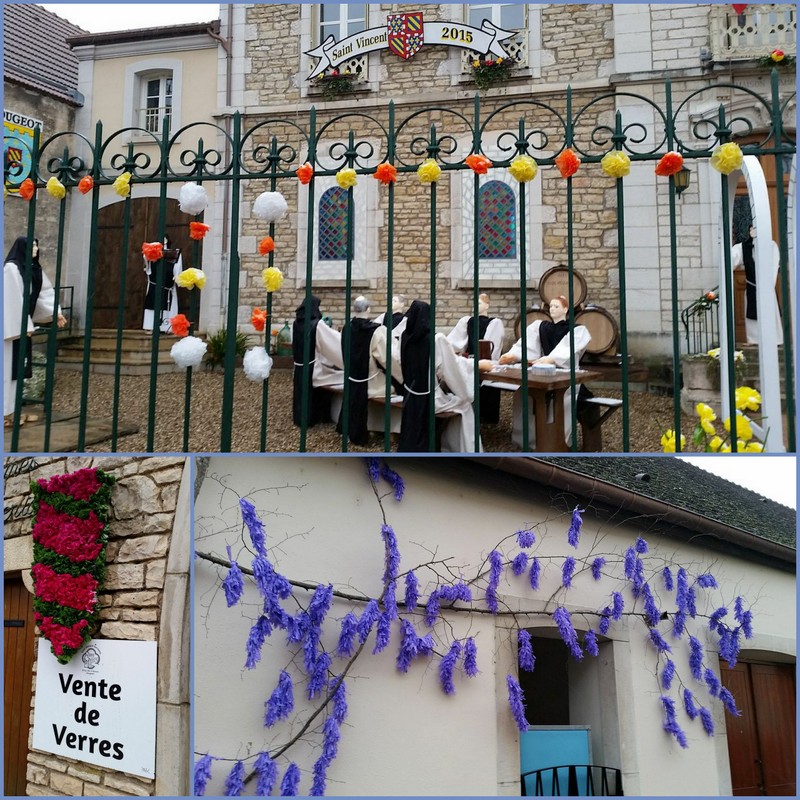 It takes the villagers weeks to voluntarily prepare for the event, decorating buildings with paper maché flowers. 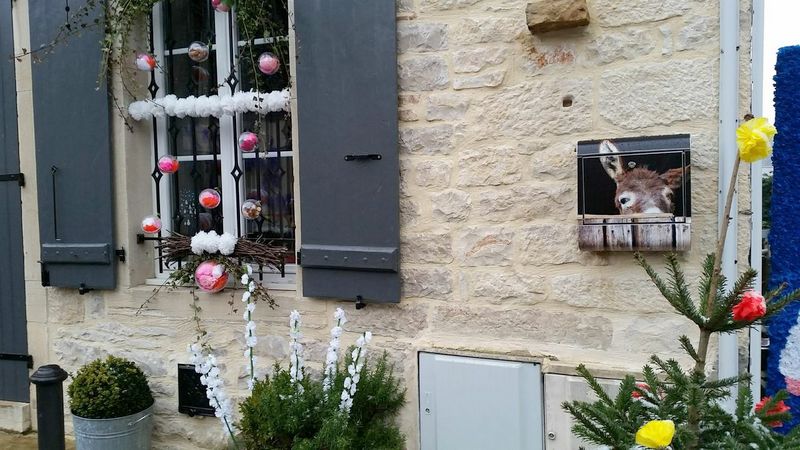 The glass comes in a special pochette that hangs around the neck, so you can wander about the villages without needing your glass in hand.  Just as well, as I could no longer feel my fingers! 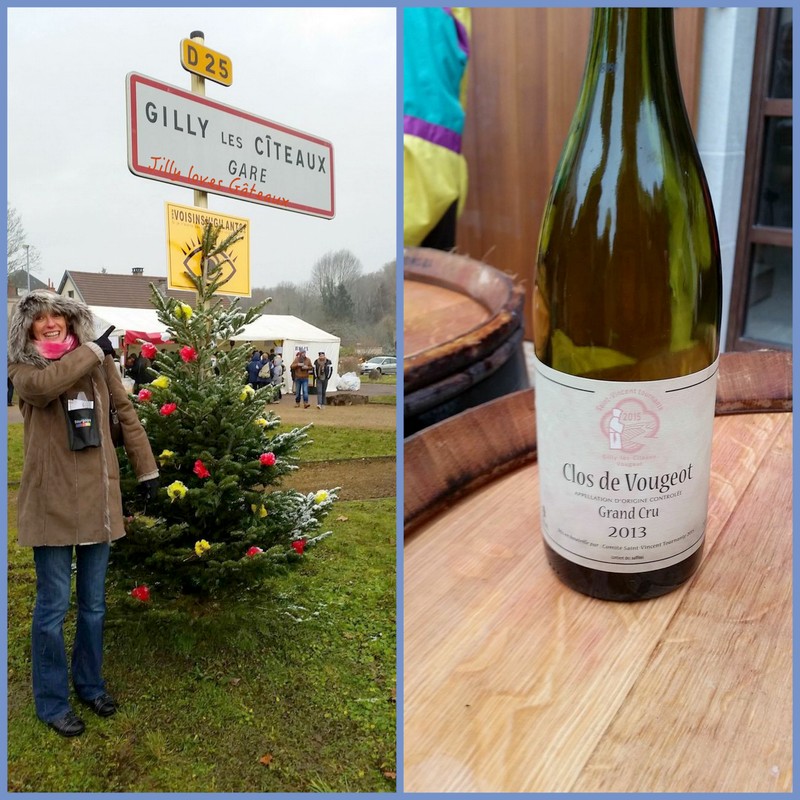 In the end, I only tasted 2 wines: the ordinary Bourgogne and one of the two Grand Cru stars, Clos de Vougeot.  Poured into a chilled glass, fighting off the snow flakes, it wasn’t just that it was over chilled: we were spoilt by tasting Jean-Pierre’s wines beforehand.  So, I just circulated to enjoy the ambience.

The village of Vougeot is particularly picturesque: I’m returning in the summer to appreciate visiting the Château du Clos Vougeot and the neighbouring wineries. 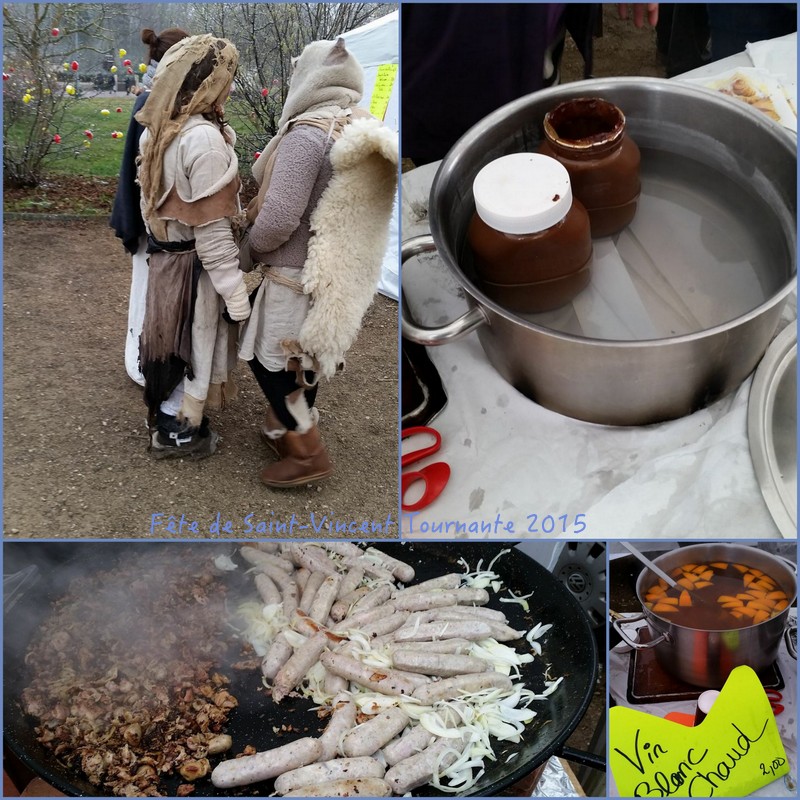 Toma and Marie’s stand were attracting some funny-dressed crowds, as the smell of Andouillette sausages were swirling around his tent.  I cannot for the life of me even try it.  The “fragrance” is rather overwhelming. The French mock me, saying it’s the same as our Scottish Haggis. It’s not the same thing.  So roasted chestnuts were my preferred afternoon goûter or 4 o’clock treat. 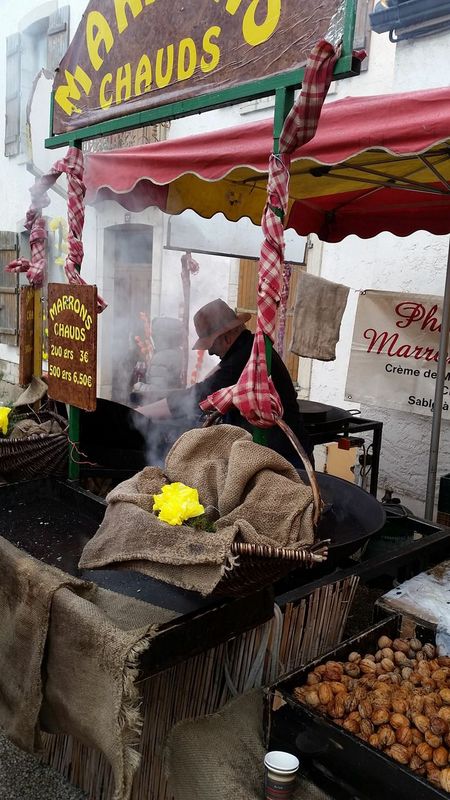 Then I stumbled on something, a snow storm took off and stepped back in time – to the Village des Gueux (desgueux means disgusting in French).  I was Asterix in Bourgogne.  Soup, anyone? 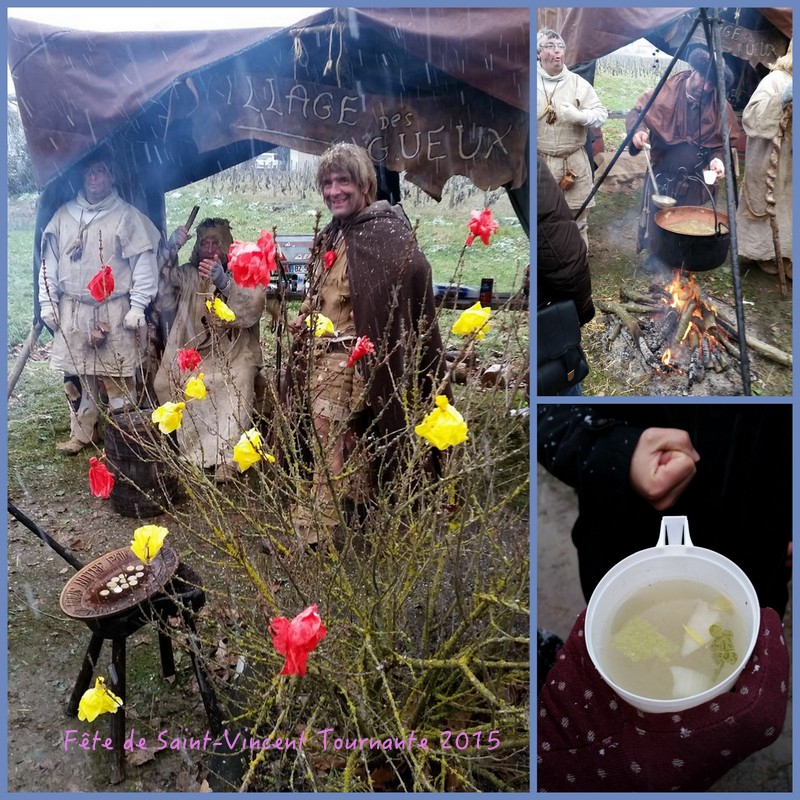 The soup was welcoming to warm frozen fingers.  Let’s say that was about it.  Motivation was strong during the long walk back in the biting winds to the mini-bus, as Toma and Marie had already left their stand and taken off to their new restaurant in Rully to prepare dinner. 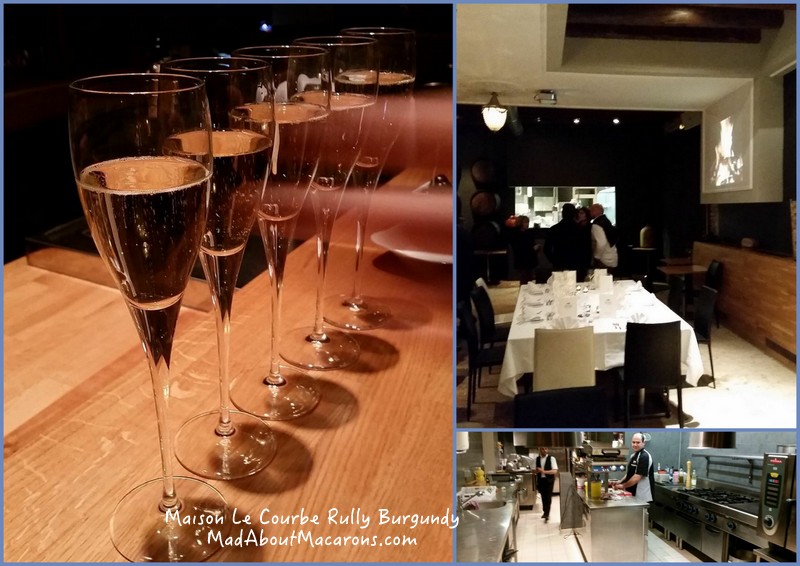 Back to civilisation, after a hot bath to defrost.  I strongly recommend Toma and Marie’s restaurant at the Maison Le Courbe in Rully.  The courtyard is wonderful (sorry, my photos were too poor in the dark) and suggest you enjoy the view to the château in Rully in the summer, when the weather is more clement. 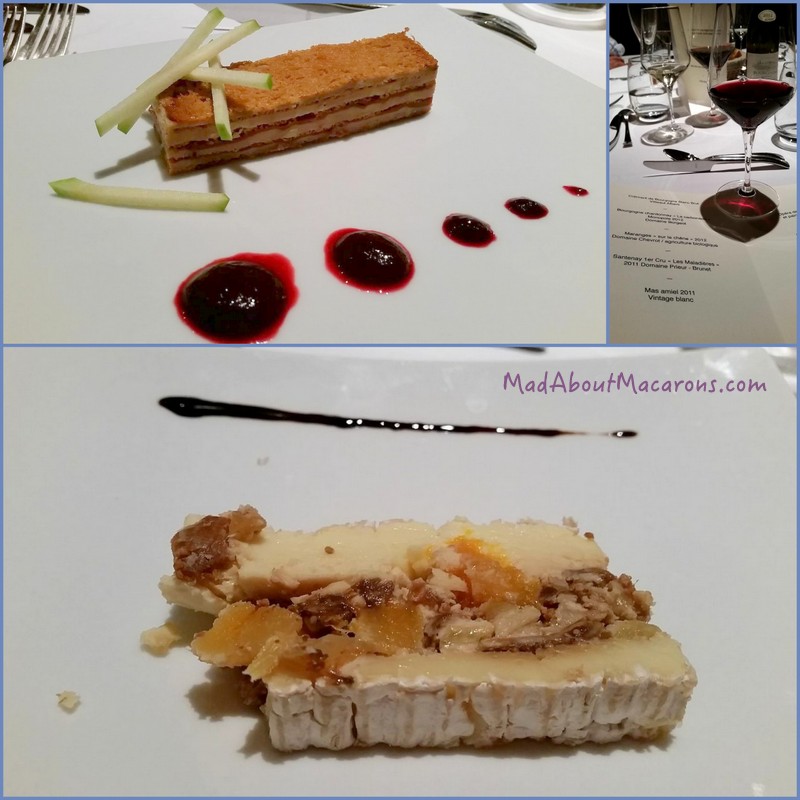 Toma’s culinary skills showed off with his entrée of an Opéra of Foie Gras, smoked duck, pain d’épices and a blackcurrant coulis.  Chicken was stuffed with snails (yes, I eat these too!  Not bad for an ex-vegetarian!) in a creamy garlic sauce.  Cheese?  I must write about this separately!  To finish off was a Paris Brest – a Parisian speciality, of which the recipe is in my book, Teatime in Paris. 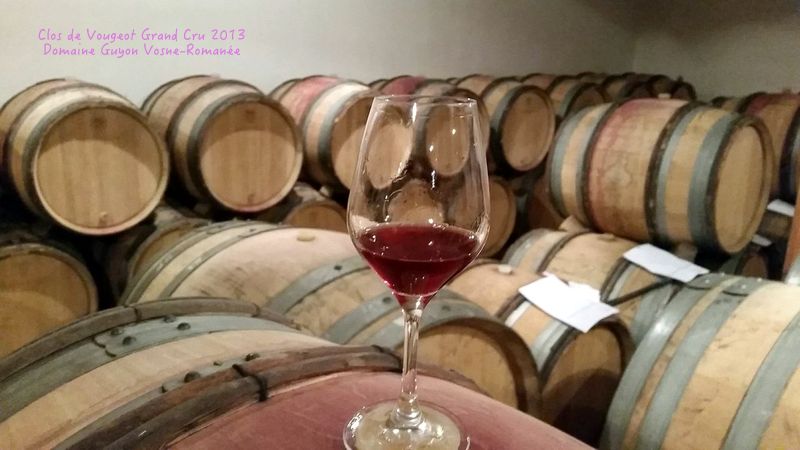 At the end of the weekend, Antoine surprised me with some boxes of my favourite wines from Jean-Pierre to take back home.  You mean, you went all the way down to the cellars to get it for me? Oh baby, baby you shouldn’t have. I’m in love…

For the latest details on this year’s Burgundy wine festival (always end January), then consult the official Fête de Saint Vincent Tournante website. For more on wine in Paris, see my article on the annual wine harvest in Montmartre, every October.