Afternoon Tea at the Ritz Paris

Indulge in whole afternoon tea at the Ritz Paris for the ultimate French Goûter à la Française with biscuits and cakes, tea or coffee or extra luxury with Champagne. Find out today’s costs (2022), dress code and meet the cakes in Proust’s favourite salon. 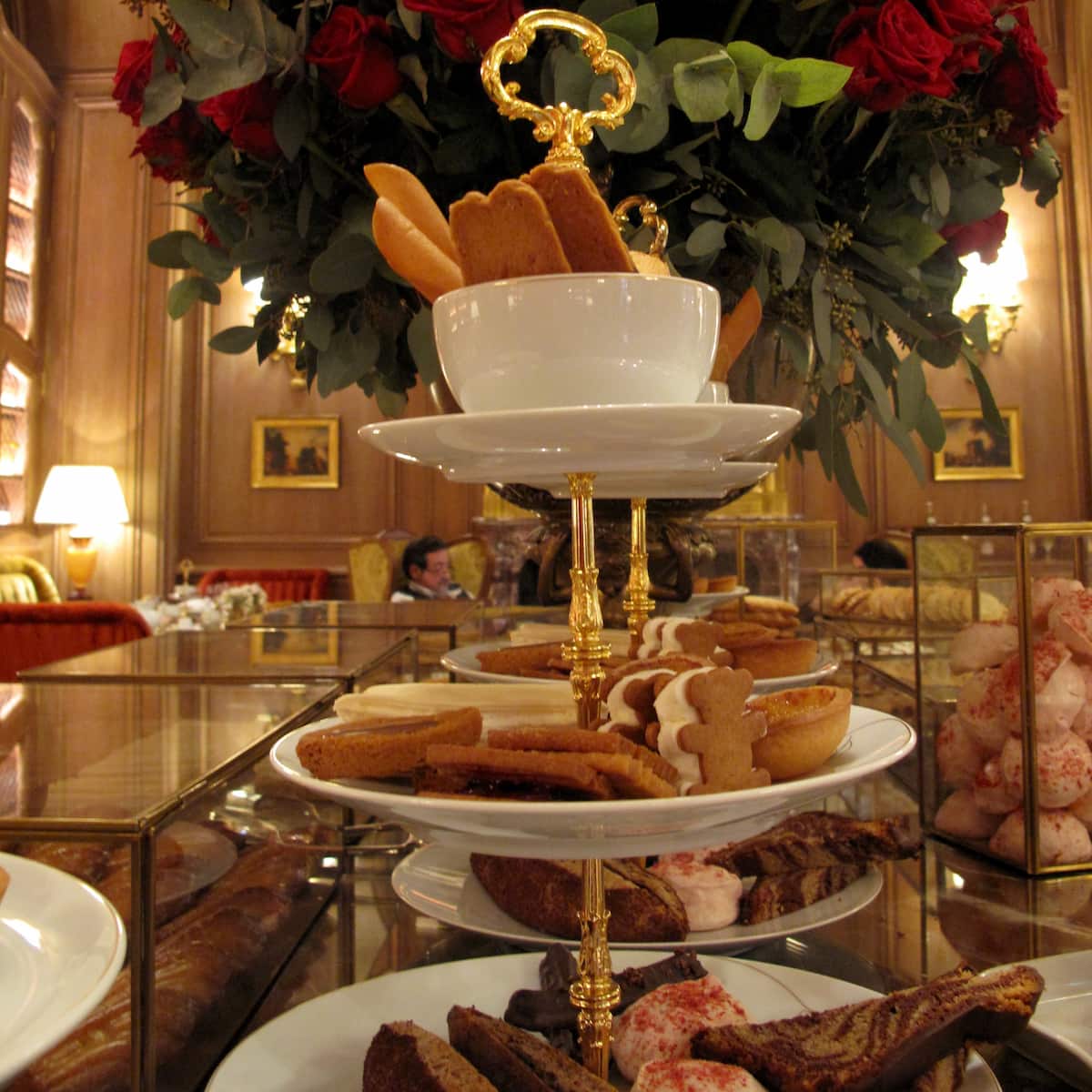 Tea Time in the Salon Proust

Winter in Paris is perhaps the best time to indulge in the ultimate French afternoon tea. It takes place by the fireplace in the salon given homage to Marcel Proust, under his watchful portrait’s eyes.

Proust could also be checking on the dress code: it’s smart casual chic attire – so even if you do wear jeans, please be smart. No trainers or sportswear are permitted.

Frankly, I like the opportunity to dress up a bit. It’s not often I get out to enjoy such luxuries! 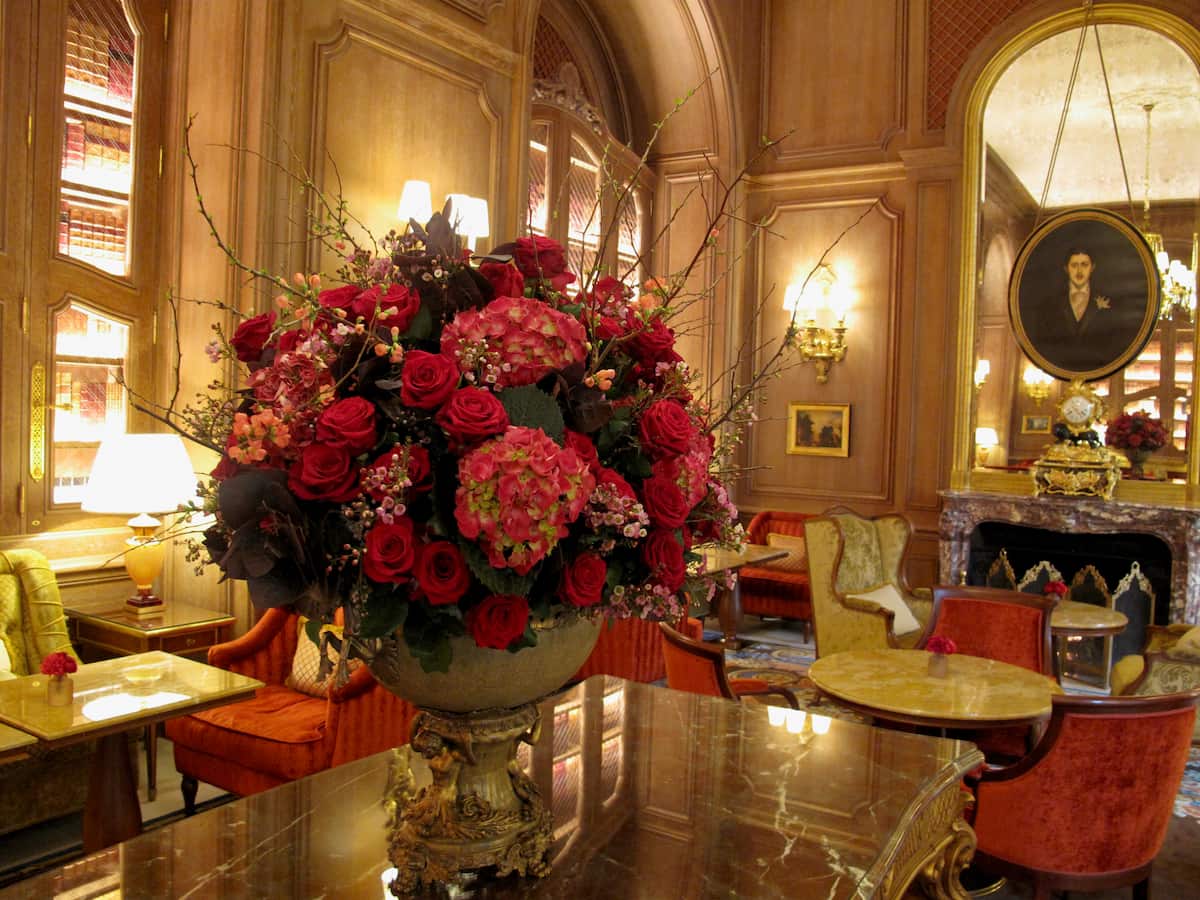 Author Marcel Proust came to the Ritz’s opening party in 1898 and chose it as his second home.

Proust apparently took to the corner spot right next to the fireplace, finding endless inspiration for his novels using the hotel’s elegant surroundings and intimate salons of the literary and aristocratic elite.

Here he felt that “Nobody would push you around“. 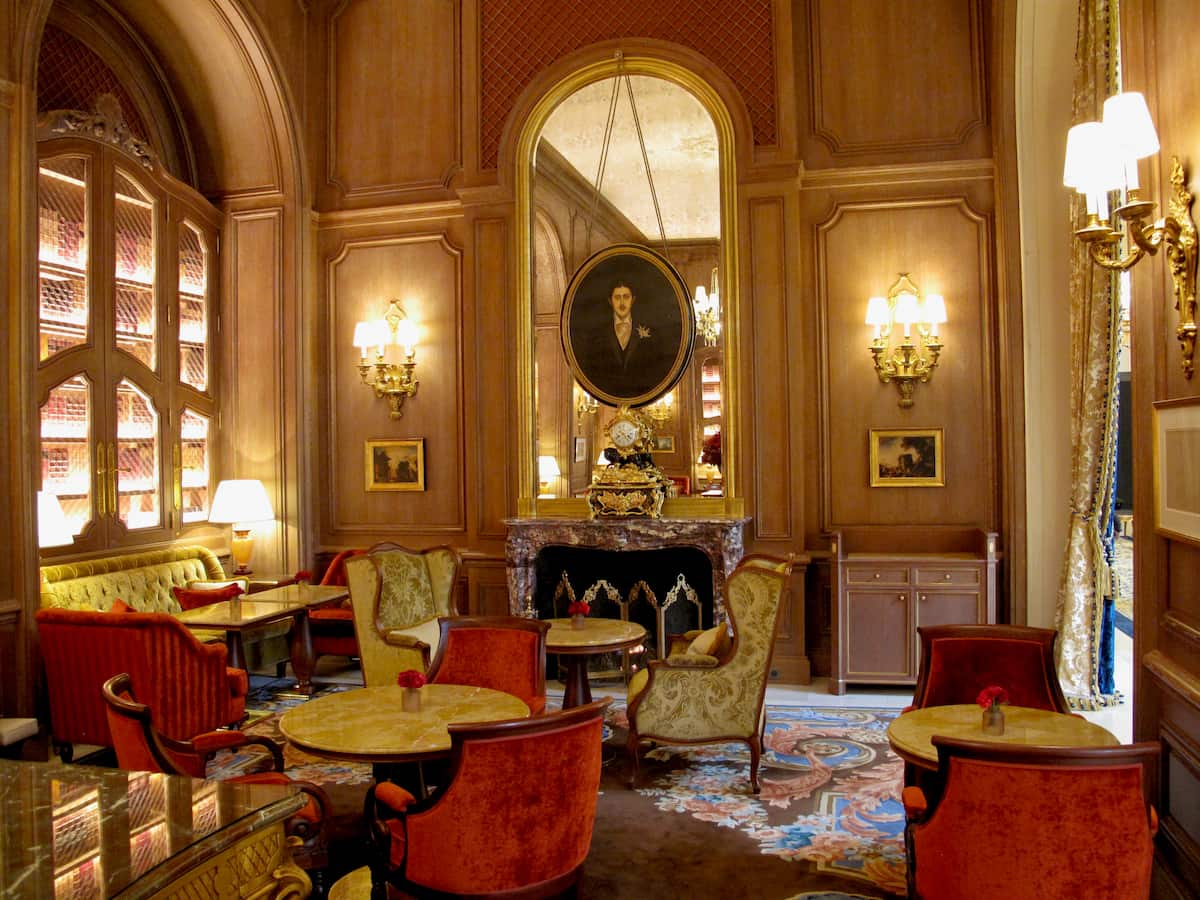 As soon as 2pm chimes, the loaded silver Champagne bucket beckons at the entrance to the open-curtained, cosy salon. Would you pick a flute of Reserve Barons de Rothschild Blanc or Rosé to add even more sparkle to the occasion? 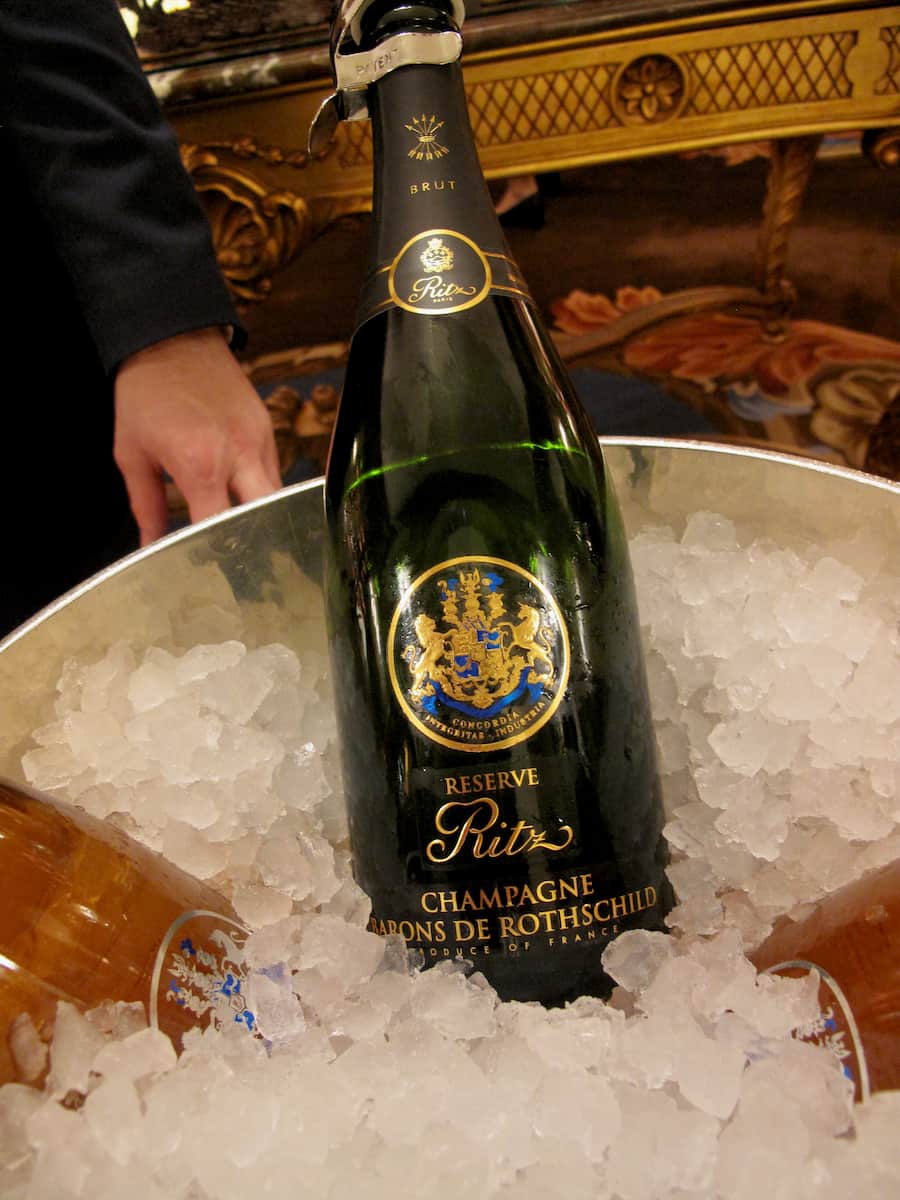 Marcel Proust looks on wide-eyed, swooning over his childhood favourite sweet treats on overflowing tiered plates. He, no doubt, would have loved what’s to come from talented head pastry chef, François Perret, who says:

“It is a journey through the flavors of my childhood memories which I grew up with and which developed by taste buds.”

Chef François Perret insists, too, that he doesn’t use sugar to excess. This is my kind of pastry chef! 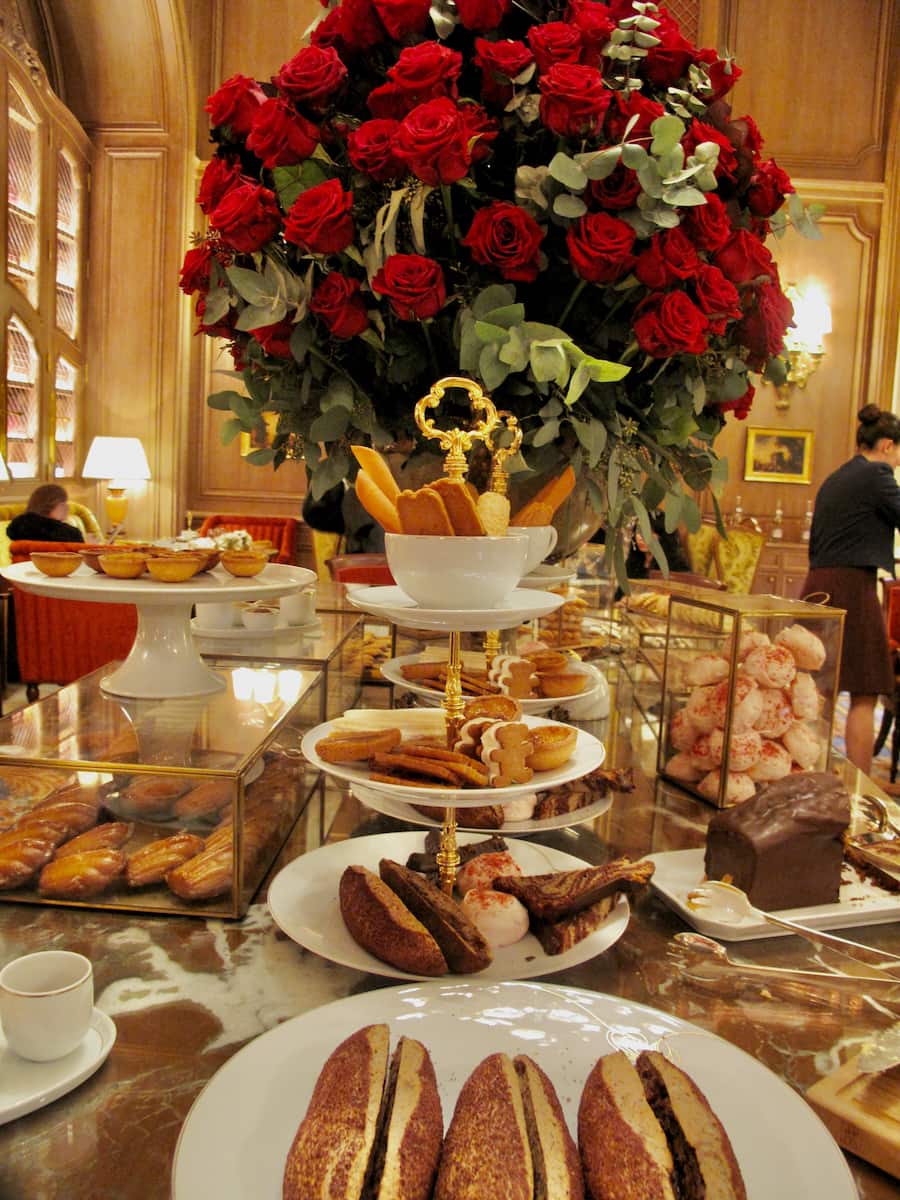 Exceptional teas from the TWG Tea Company in Singapore are given pride of place over pages and pages in the menu.

The tea sommelier has picked out black, green and white teas, including semi-fermented, fermented teas and herbal infusions. I would recommend the Ritzy Earl Grey with added cornflowers.

Can You Have Coffee with Afternoon Tea at the Ritz?

Don’t drink tea? Non- tea drinkers are also spoiled for choice with the likes of hot chocolate, a choice of different coffees, as well as iced and cold drinks. 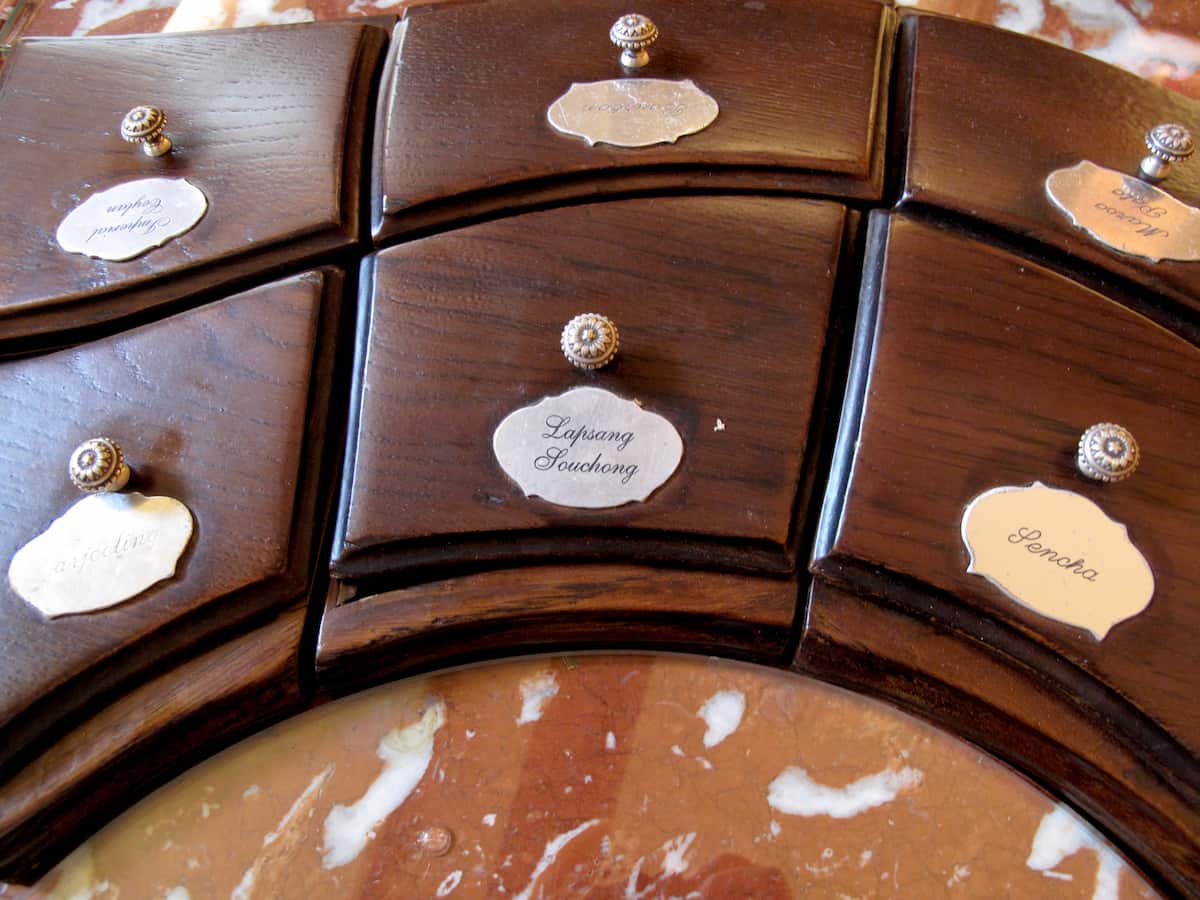 Afternoon Tea at the Ritz is distinctly French in the Salon Proust. There are no patisseries or pastries as such; instead typically refined biscuits and petits fours from yesteryear plus mini tarts and cakes.

It’s the scalloped, humped madeleine teacake that takes centre stage from start to finish, as made famous by Proust in his novel, “In Search of Lost Time” (A la Recherche du Temps Perdu). Even the tea service evokes a golden madeleine motif: Chef Perret helped to design the French white limoges porcelain made by Haviland. 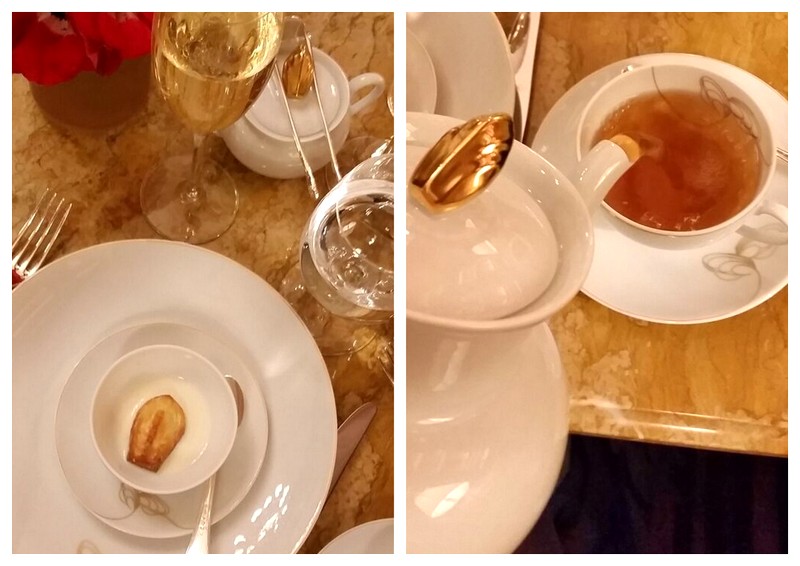 Service is immaculate and convivial, as each element of this Parisian teatime is given a touch of relaxed ceremony.

The Cakes and Biscuits

A mini ‘baba madeleine’ arrives in a bowl for starters, then sumptuously immersed in lemon-infused milk – we’re asked to leave it to infuse for a minute to enjoy the experience at its best.

Three tiers of treats arrive, competing for centre stage: we are introduced to each layer in order, starting with a quirky teacup as top tier. They are all biscuits and petits fours that would have traditionally been served in the brasseries of the time: sponge fingers with cocoa nibs, Russian cigarettes, Florentines. 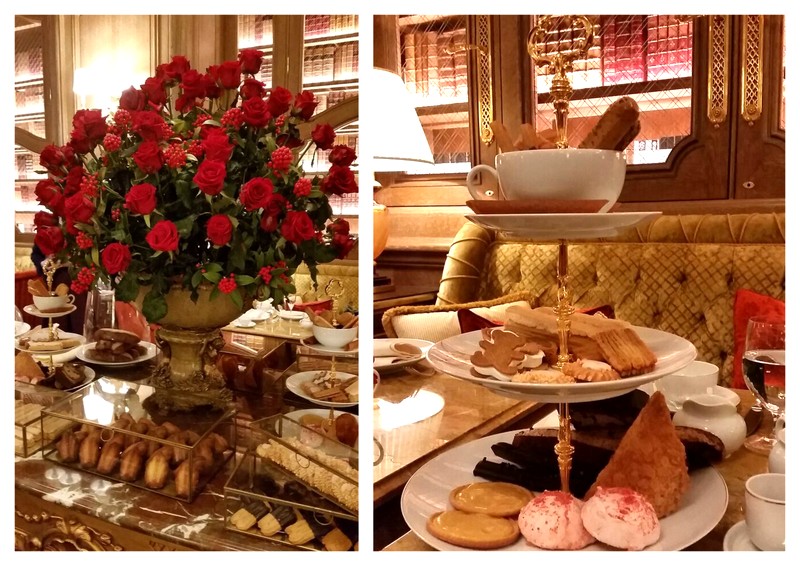 The second tier highlights biscuits such as Spritz, buttery Pailles au framboises (nothing like the French packet ones!), airy allumettes of egg whites and lemon, marshmallow bears. The bottom tier is devoted to tarts and cakes, with the lightest sugar tarts on a fluffy French brioche base, old-fashioned lemon meringue tart, pink praline meringue, chocolate marble cake and giant tuiles.

A most memorable treat is perhaps the “Pain au Chocolat”. Not at all appearing like the classic viennoiserie that we see in Parisian boulangeries, Chef Perret has played with the simple French childhood goûter (after-school 4pm snack) of a baguette sandwich filled with a couple of chocolate squares, cleverly transforming it into cocoa-nib-covered dark chocolate breads served with a platter of cocoa butter, coconut butter, whipped cream, and jam. 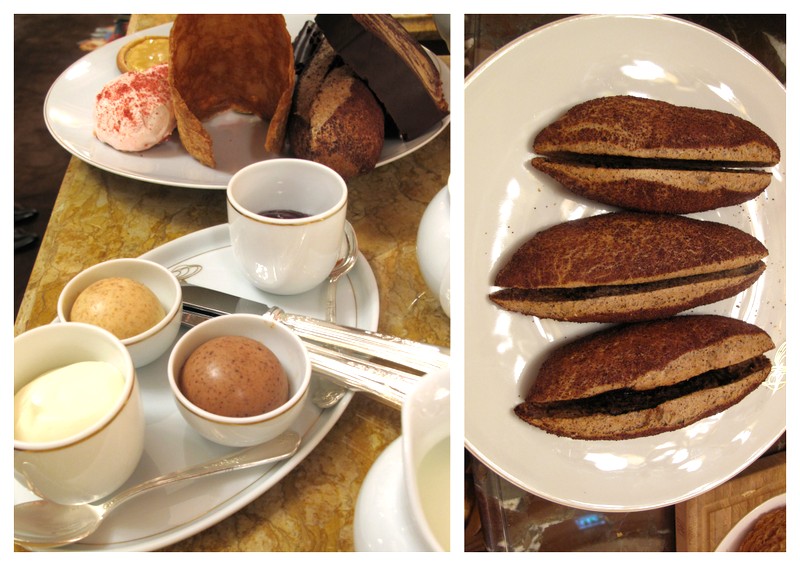 The Madeleine du Ritz arrives hidden under a bell, unveiled as delicately perfumed with orange blossom and lemon-glazed. So not to completely ruin your surprise, they change the flavour combination every now and again.

Recipes for the perfect traditional French humped madeleines and tuiles are included in my second book, Teatime in Paris, to re-create your own ritzy teatime at home.

With all that tea, even a trip to the restroom was discrete ceremony, where the tap water glides from golden swans. 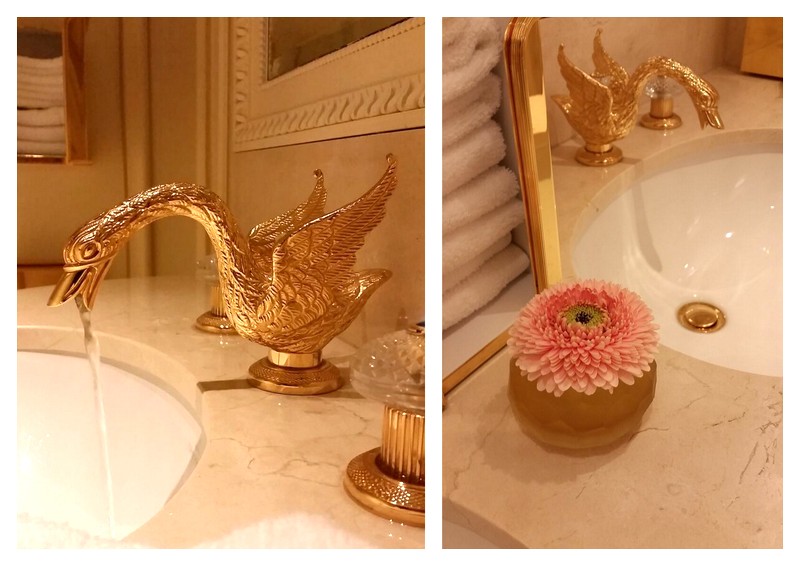 How Much Does Afternoon Tea at the Ritz Paris Cost?

A Parisian afternoon tea at the Ritz starts at 68 euros for the traditional Goûter à la Française with all the biscuits, madeleines and tea.

It goes up to L’Impérial at 103 euros for the crème de la crème with Champagne and an extra special dessert.

Frankly, I couldn’t manage to eat all of that in an afternoon so opted for the first choice with a glass of Champagne: Le Royal for 88 euros. Just to digest, of course!

I’d missed the bill arriving, which was yet another wonderful touch (their discretion, that is – not that I’d run off to the bathroom to avoid paying the bill!).

The bill was elegantly and discreetly placed at page 46 inside an old edition of A la Recherche du Temps Perdu. It’s the point where Proust describes that perfect taste of a childhood memory through a Madeleine and some tea. 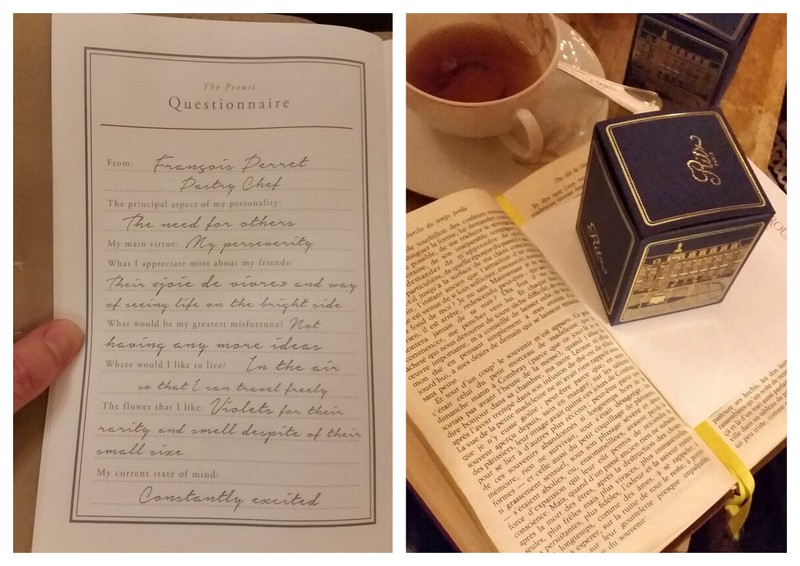 In Case You Can’t Finish All the Cakes

Don’t be fooled by all the light biscuits and mini cakes: it’s just not possible to finish everything that’s presented (well, without needing a golden crane option at the end to lift us out).

A box of untouched goodies are yours to take home, plus yet another finale: the most exquisite tiny tea caddy containing a Rooibos and yuzu tea with precise instructions to infuse 5g for 400ml at 90°C for 3-4 minutes, s’il vous plaît.

After such a Ritz Paris Teatime, it’s quite easy to take a stroll indoors and lose yourself in the sumptuous corridors leading to the Hemingway Bar. To access the bar, temptations continue with this elegant shopping gallery after teatime! 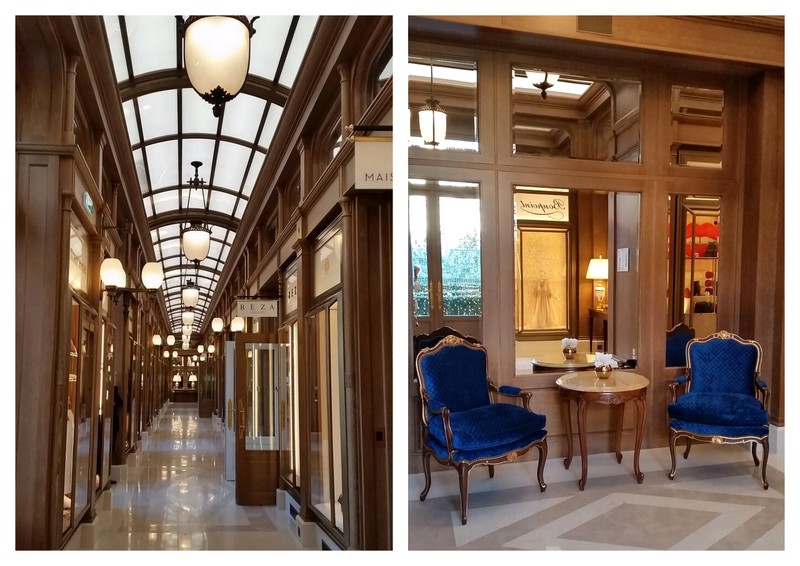 How Long is Tea at the Ritz?

With teatime starting at 2pm and ending at 6pm, it’s a shame not to spend all of the afternoon here. It’s amazing how 4 hours can go by so quickly to appreciate all of the cosy and historical Parisian ambience.

By the time you’ve enjoyed an afternoon of it by the fire in such lush surroundings, it’s extra magical in Winter to come out to the sparkling lights of Place Vendôme. 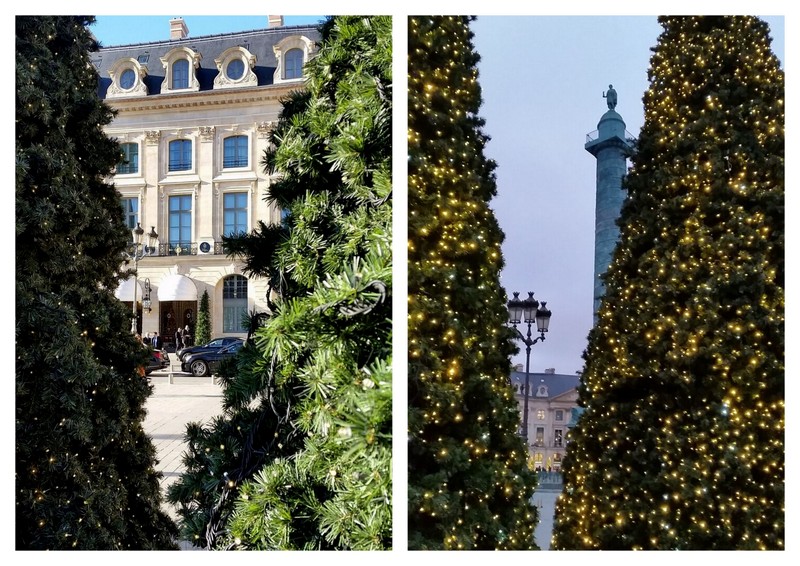 11 responses to “Afternoon Tea at the Ritz Paris”