Confiture de Lait Recipe and How to Store Vanilla Beans

I don’t normally like jars of nectar that’s so sweet but after trying this recipe, I’m loving this confiture de lait recipe, or Milk Jam, discovered while shopping at my parents-in-law’s market in Provence. 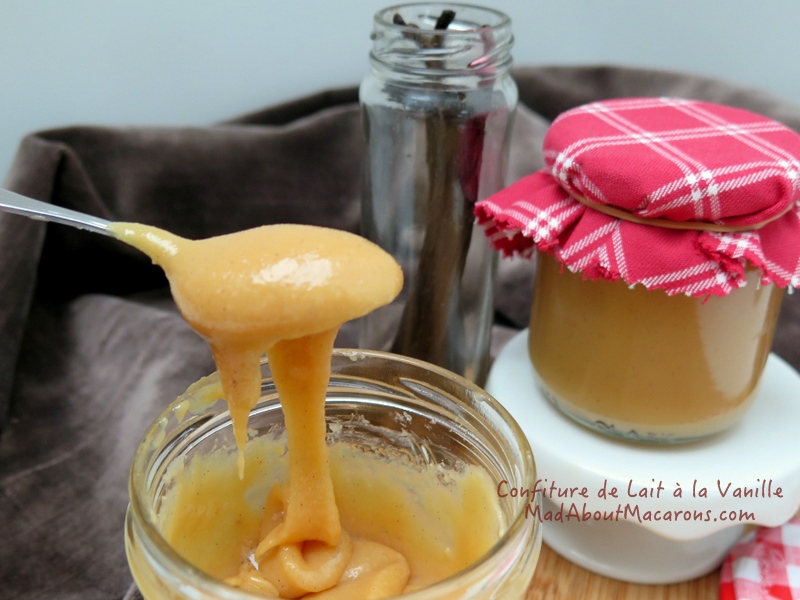 I have a confession to make. I’m glad it hasn’t really snowed in Paris this winter but I caught myself displaying a surprise tinge of jealousy the other day, admiring our Provençal friends’ snowy winter wonderland photos. They’d taken them just before they left Avignon on the TGV (speed train) to visit us snow-deprived souls “dans le nord“. 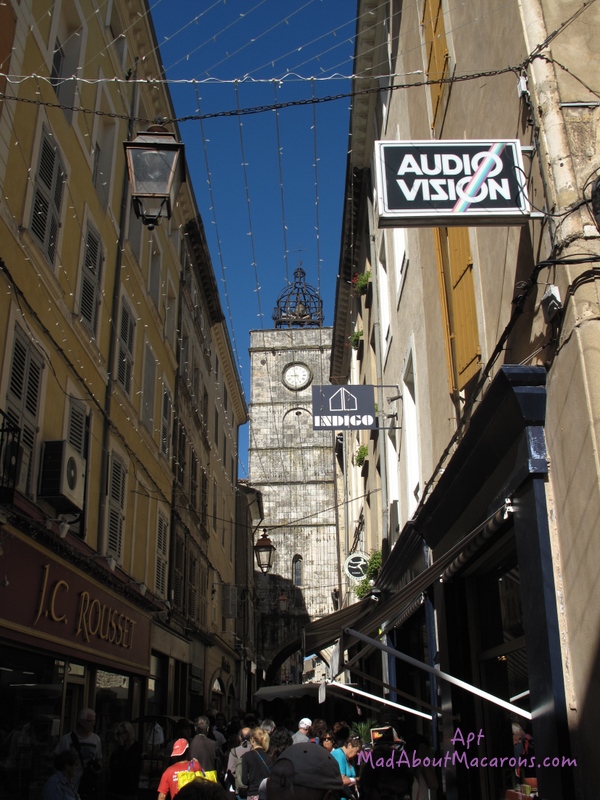 The paradox is that when it’s cold in the south, it can be lovely in Paris, and vice-versa. In winter, Provence can have the added wind-chill factor with the southern Mistral winds but in summer, they are blessed with the most sun-kissed, flavoursome fruit and vegetables.

Seeing Rome’s legendary Campo dei Fiori market last week reminded me of our favourite Provençal market in Apt. My parents-in-law live nearby in the hilltop village of Saignon, so this is our local market pilgrimage during summer visits. Apt is also where we stock up on candied fruit.  Renowned as the world capital for fruits confits, buying direct from the factory by kilo is far cheaper and better quality than we can find at our Parisian super-markets. 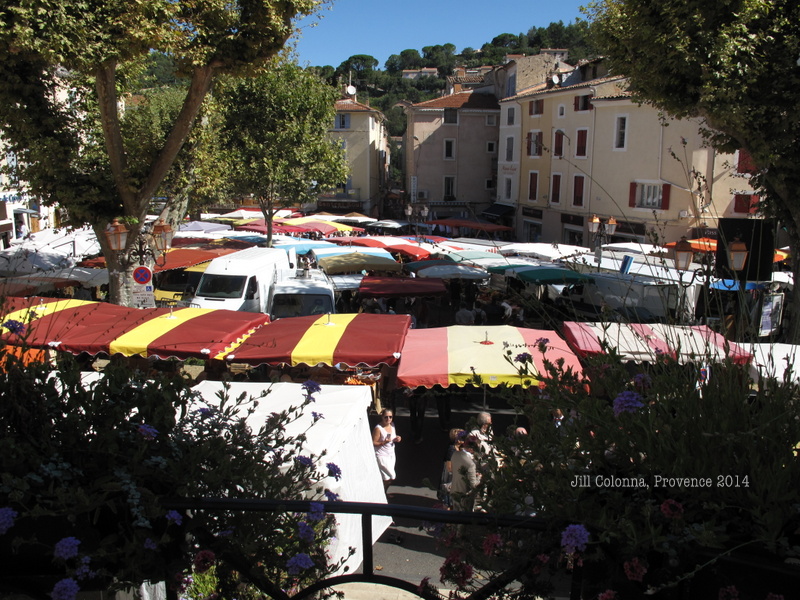 Apt’s market is far from small; here’s just a fraction of it in the square of the Hôtel de Ville (town hall), as it snakes out into the main cobbled street, the shady side streets, and a few more animated squares. In the summer, it’s crammed with more Dutch, Belgian and British tourists than locals, and musicians from around the globe come to busk in the atmosphere.

Stocking up on our favourite lavender honey, this time around we also met Monsieur Jean-Pierre Setti, selling the most plump, natural sticky Bourbon vanilla pods/beans from Madagascar. 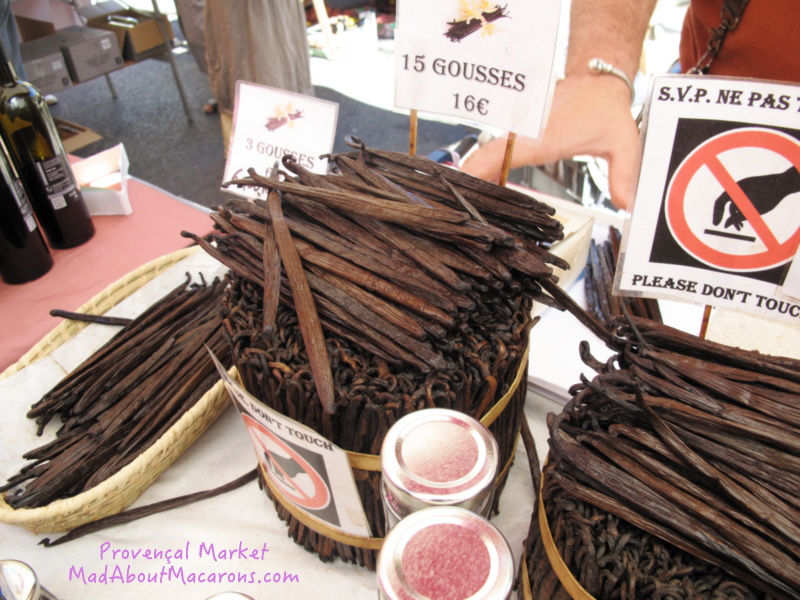 Can you smell their perfume? Counting up each exotic stick of fragrant magic, he gave some simple advice how to preserve vanilla pods/beans: put them in a long, sealable jar with just 1/2 cm of rum, close the lid, et voilà! 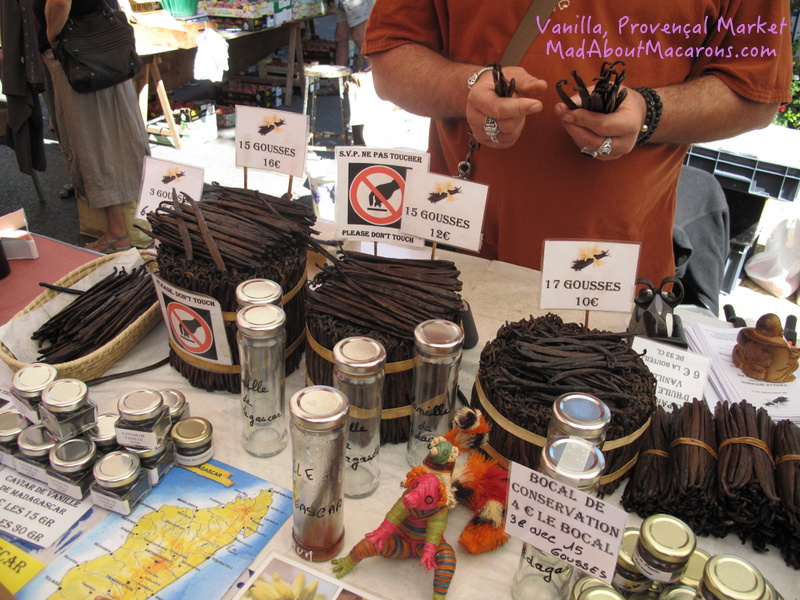 The girls were fascinated at the next stand by these vibrant Crête de Coq flowers, as they resemble a rooster’s head. Watching the 6 Nations’ rugby yesterday reminded me of some news heard on French radio end January about a particular kind of serial killer roaming around Toulouse. Prized roosters that represent France just before rugby matches were mysteriously disappearing.  Apparently French police believed the culprit was a mink. As my friend, Mel Fenson says, “Better that it’s not human!” 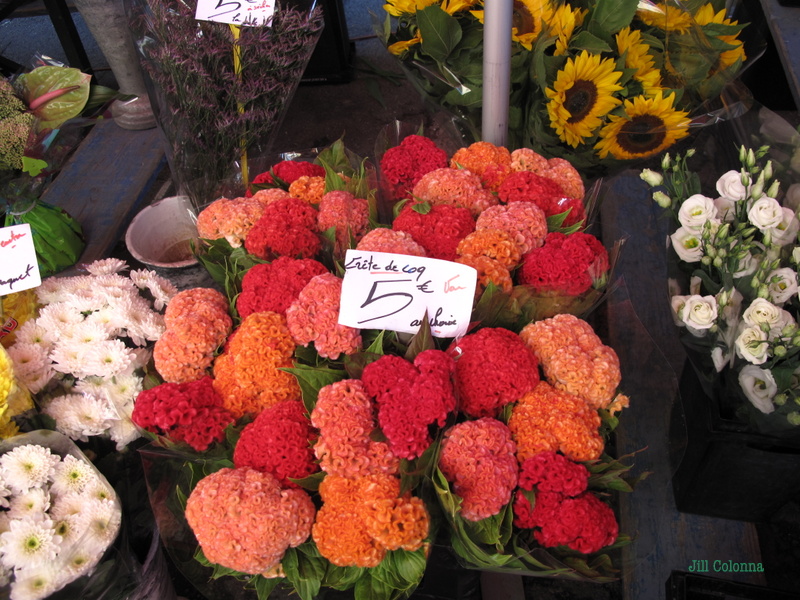 Back to vanilla and Monsieur Setti, and back home, I found a few long jars that used to hold shop-bought fruit coulis, poured in a measure of rum and squeezed in the vanilla that had dried very slightly from our return drive.  A week later, I’d developed a new daily ritual of opening the jar to sniff the aroma jumping out of it. Better to sniff vanilla, right?

I took a look at Mr Setti’s recipe flyer that he’d thrown in with our goodies.  One of the recipes was for confiture de lait (literally, “milk jam” – or more widely known as dulce de leche). Like salted caramel, it’s more of a perfect winter treat. 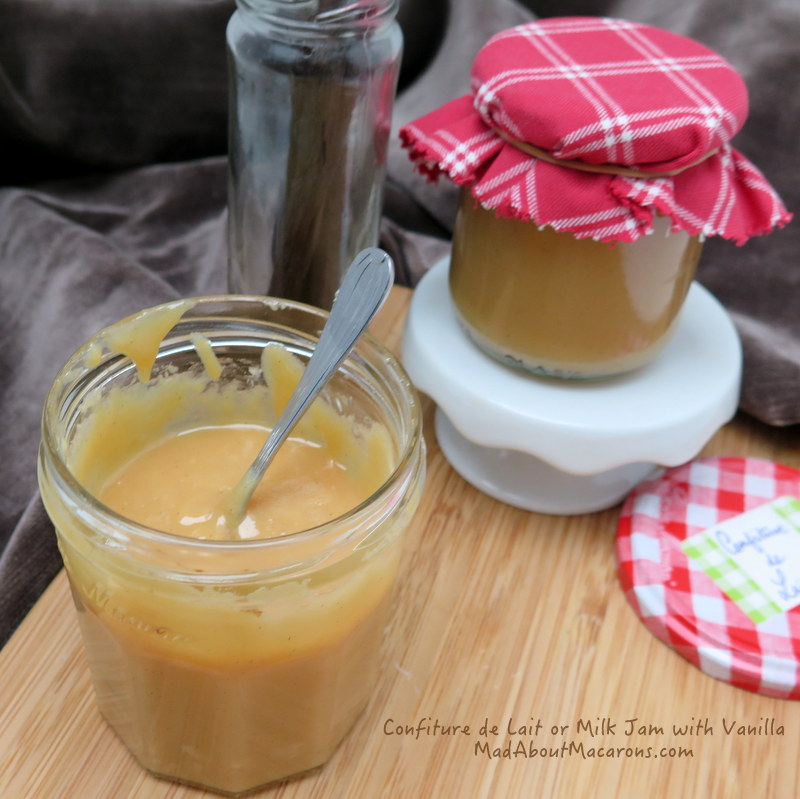 There are many express recipe versions on the internet using a can of sweetened condensed milk and cooking it with some water in a pressure cooker.  Call me old-fashioned but I loved popping back over to the stove now and again to stir it, having the house smell sweet on a dull and nippy Sunday afternoon.  It’s a simple, soothing way to cheer up the senses! 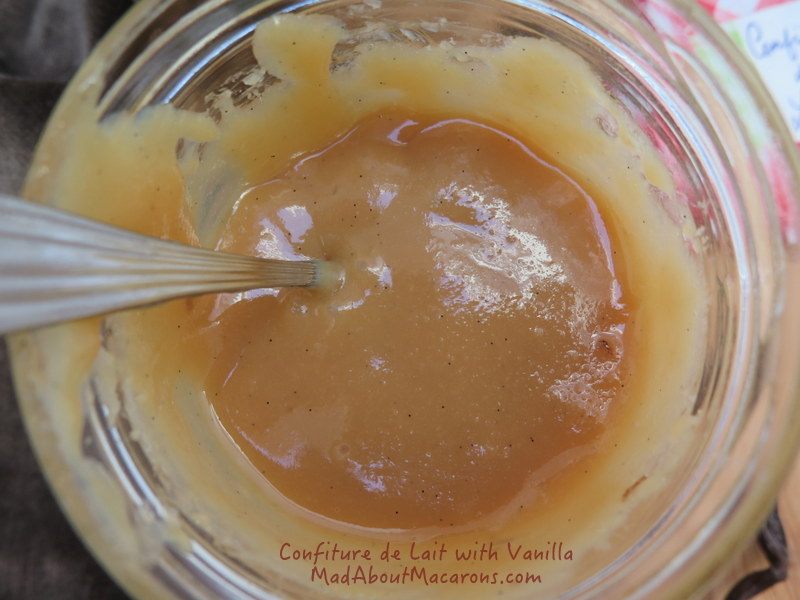 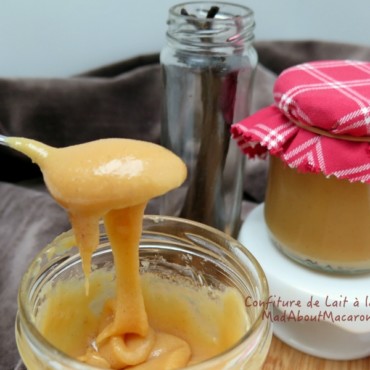 Deliciously easy recipe from Monsieur Jean-Pierre Setti from the market in Apt, although I’ve lowered the sugar quantity slightly.

The confiture de lait will harden as it cools. Store in the fridge. NUTRITIONAL INFORMATION: 446 Calories per half a jar Jill Colonna MadAboutMacarons.com

How long can you keep confiture de lait? As it’s a caramel, it will last a couple of months kept in the fridge, although I found it best kept within a month.  Reheat it for a few seconds in the microwave and dribble it on crêpes, waffles and about anything that you fancy.

I made just a few macarons with Confiture de lait.  I personally find them far too sweet in a macaron, and much prefer “plain” vanilla macarons (recipe in Mad About Macarons) but I’ll leave that for you to try.  In any case, the girls spread so much of this on crêpes recently that the stock didn’t last long!

P.S. The good news is that vanilla is one of the heroes in my new easy pâtisserie recipe book, “Teatime in Paris!”

I’m going to go sniff my vanilla beans even if they are not steeping in rum… Yum.

Ah, I understand your joy of standing at the stove and stirring the confiture de lait, really cooking anything the old fashioned way. Your confiture is gorgeous and absolutely tempting (I’ve never made it). And I too must try adding rum to the vanilla pods!

Thanks, Jamie. Sounds right up your street now, Mme Hotel owner and queen of jam-making. Love the sound of all your pots of sweet gold!

Oops—I see this is an old post! Glad to see your new blog look!!!

Ooops x 2!! I didn’t realise this had gone live. It shouldn’t be since it’s not ready yet…