This Corsican Terre & Mer Salad is literally where land meets sea on a plate. It’s Scottish smoked salmon served with Corsican charcuterie. Add green salad, apple and beetroot and voilà – an elegant, easy starter, made in under 30 minutes. 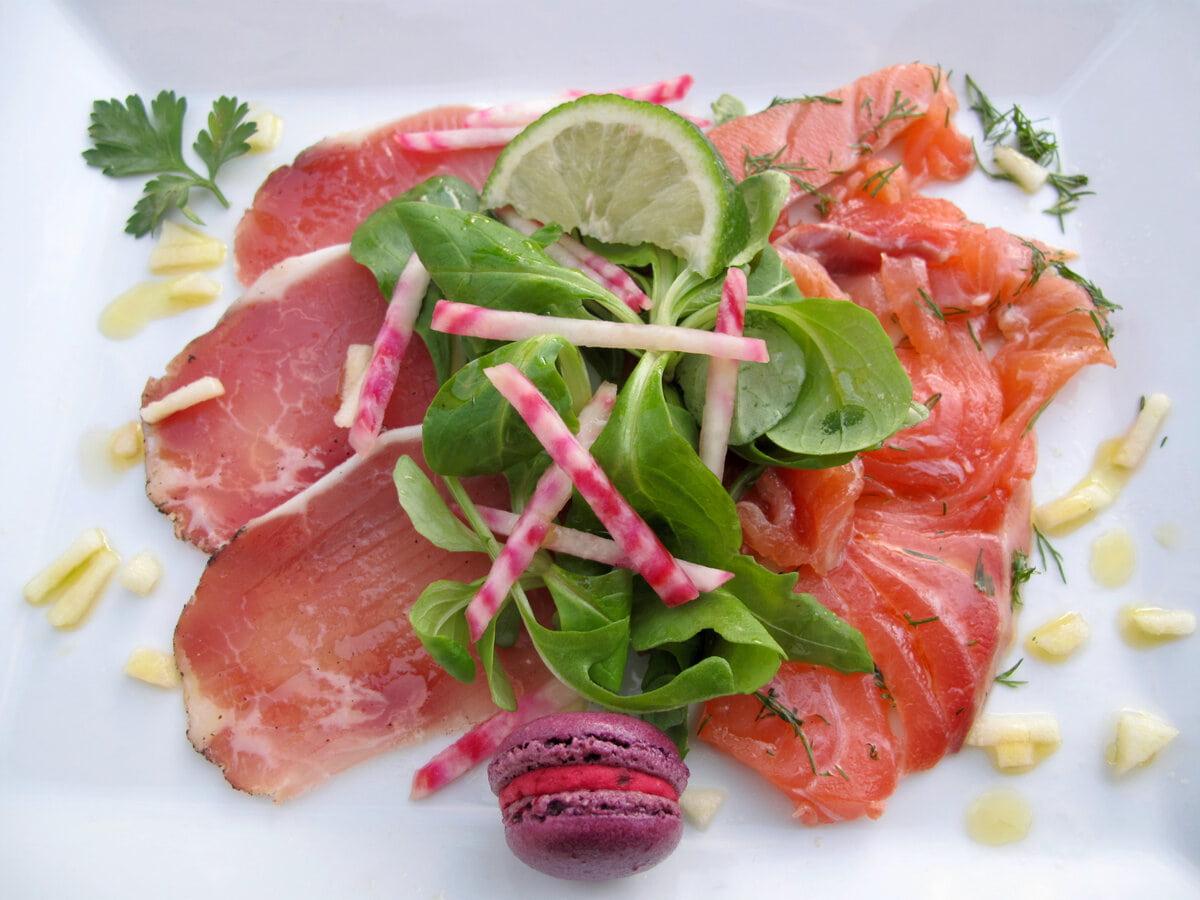 It’s like my Corsican and me – a delicious marriage meeting Corsica with Scotland!

A Taste of Corsica – in Calvi

Wild waves were crashing on the rocks off the west coast of Corsica last week. We were visiting family around Calvi and, as we were impatient for our fun little nephew to awake from his routine siesta or afternoon nap, a windy walk along the ragged coast of Punta di Spanu was perfect to idle away the time. 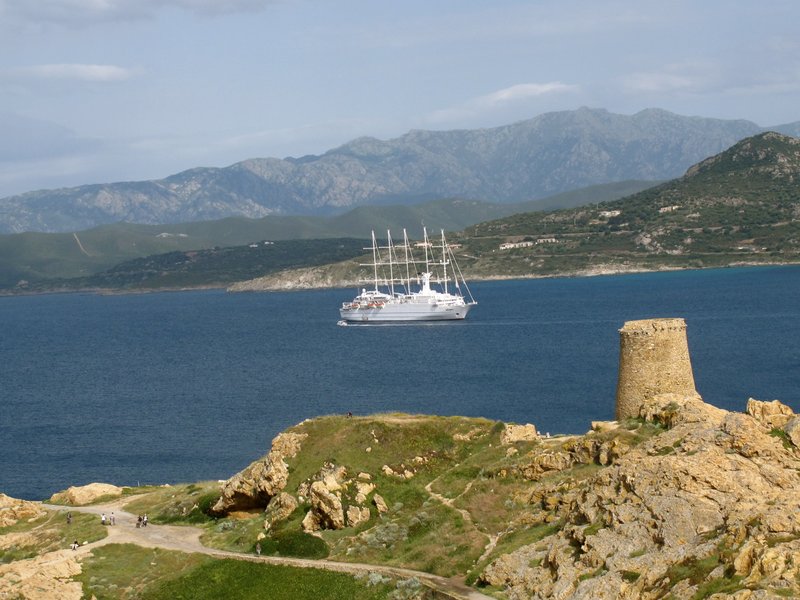 There’s something rather spooky about the Genoese Towers dotted along Corsica’s dramatic coastline: echoing cries whistle in numbed ears from distant tower-keepers as they prepare for invaders to claim the Island of Beauty.

What is the Corsican Maquis?

If only I could have bottled the fragrance of the Corsican maquis for you.

The maquis, or undergrowth, is a heady mix of wild herbs: rosemary, thyme, myrtle, wild cistus, laburnum, sage, mint and curry plants. Such an intoxicating mixture of salty, smoky, spicy perfumes come together as a herbal, almost gingerbread, smell.

It’s hard to imagine that just 15 minutes in the car inland and you’re already driving in the snow-capped mountains. Donkeys and goats grazing on the higher maquis-floored slopes make life seem at a completely different pace to city life as we know it. 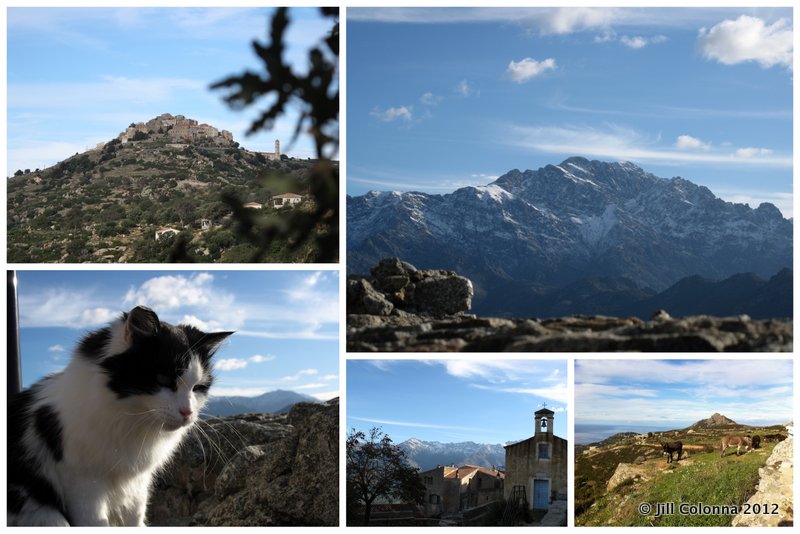 San Antonino, one of the beautiful villages of France which inspired ‘l’Enquête Corse’

We were in the clouds. I found my hermit-like hideaway. Although judging by the look of the car fallen by the side of the mountain, there wouldn’t be much of a getaway too soon if I suddenly changed my mind.

Tea in Montemaggiore? Pas de problème: there was even a tiny bar that could bring back the life in my cold hands with a hot cup of Lipton while the children had… ice creams. Well, that’s all there was and who would want it any other way? 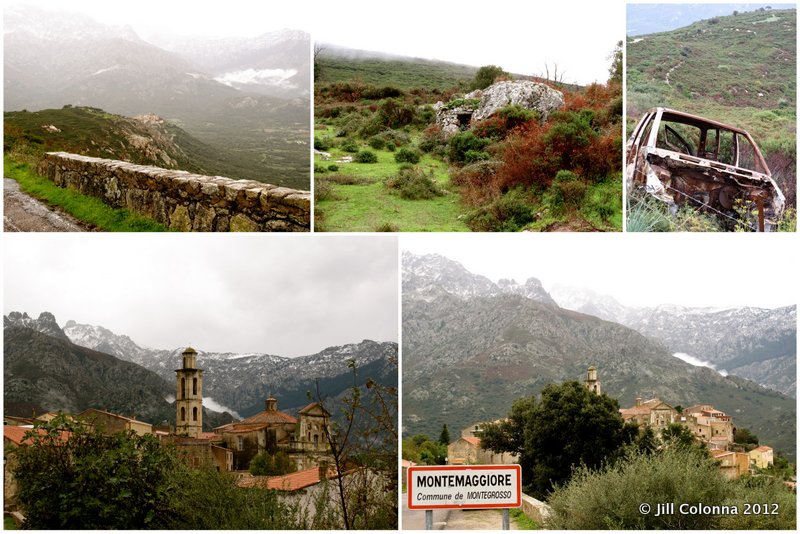 I had a confession to make: I had this burning desire to just drop everything and hijack the tea-room opposite the chapel up at the Citadel in Calvi.

Who wouldn’t relish the views up there of the sea and the land, making macarons, fiadone (Corsican cheesecake) or éclairs all day and awash yourself with pots of tea? Or perhaps the local tipple, Cap Corse, an addictive bitter-sweet apéritif made with quinine?

The photo (top right) is all that’s left of the house reputed to have been Christopher Columbus’ birthplace. What do you think?  Was he born in Corsica or Italy? Corsica, of Corse!

Our trip’s grand finale was dinner at the wonderful restaurant, U Fanale. The chef, Philippe Gouret delights visitors with a surprise Corsican starter salad of terre et mer, where land meets sea. At first glance, it seemed a strange combination with smoked salmon and smoked charcuterie on the same starter plate – but when I tried them both together it was just fantastic!

Our friendly server introduced us to a newcomer wine from Calvi, le Clos des Anges. Alas, the Irish winemaker, Richard Spurr wasn’t around during our visit but next time I’m dying to stock up on their white oily nectar even if he surprisingly never returned our calls. 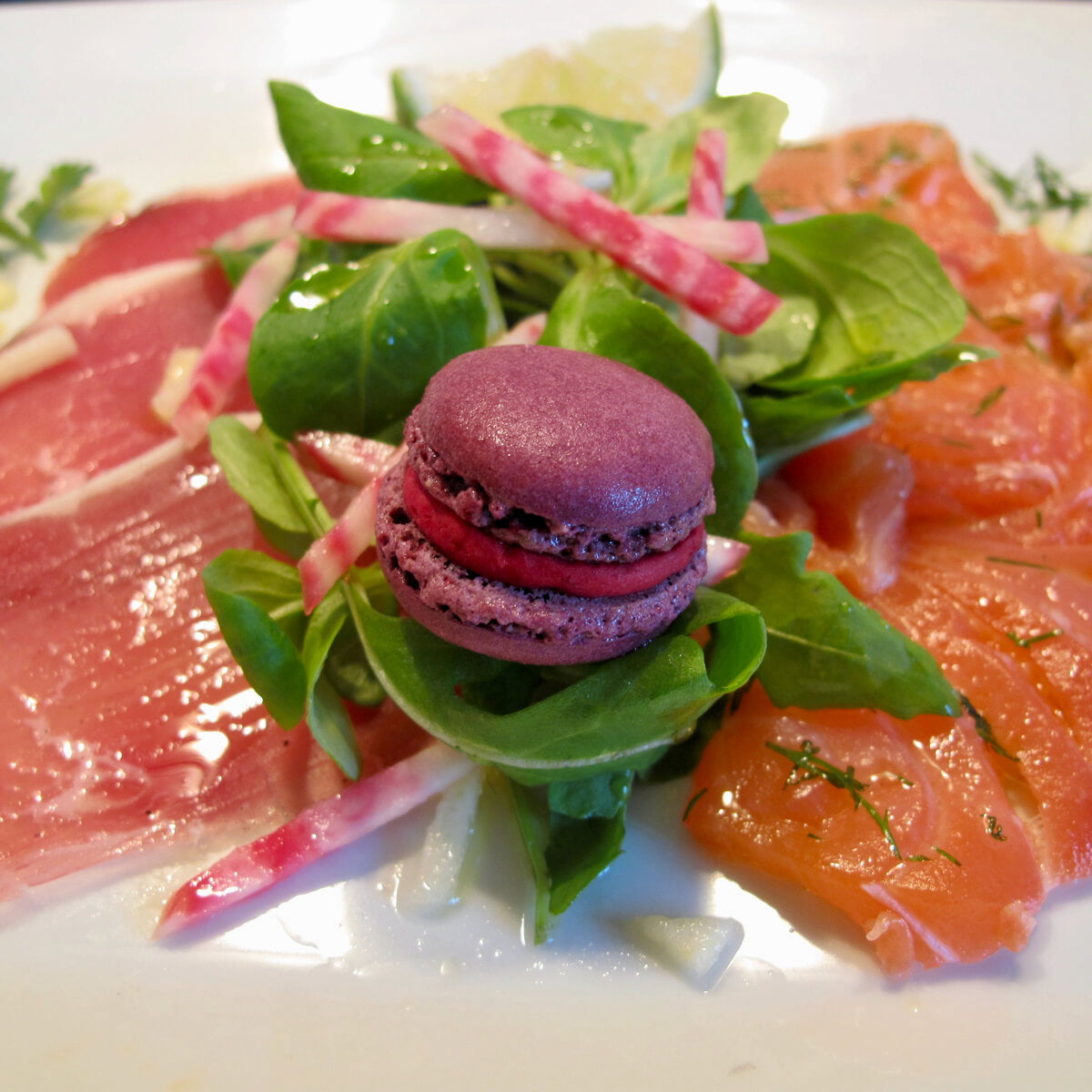 Inspired by the chef’s ideas, I loaded up on Corsica’s famous charcuteries and as soon as we returned home, found some beautiful Scottish Smoked Salmon slices at the market. It’s so easy, it’s not even worth a recipe card!

Serve the smoked salmon with thin slices of Corsican Lonzo (my favourite charcuterie as it’s a fillet cut without much fat) or your favourite thin slices of charcuterie meat.  Add some lamb’s lettuce (salade de mâche) and julienne strips of chiogga beetroot (marinated in olive oil and Xeres vinegar).

I added some finely chopped Granny Smith apple marinated in lemon juice for that extra personal touch. Plus, just saying that adding a beetroot and horseradish macaron takes it to the next level! Macaron recipe in Mad About Macarons – there’s a whole chapter on savoury macarons. 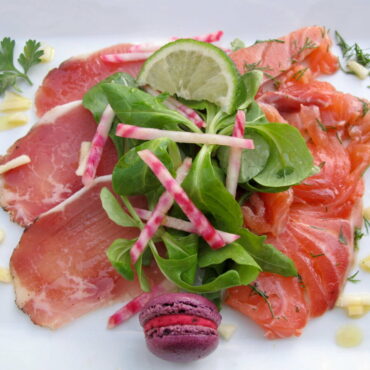 A quick and delicious salad where land meets sea on a plate. Serve Scottish smoked salmon with Corsican charcuterie and add some green salad, apple and beetroot.

Serve either 2-3 slices of charcuterie and salmon each per person, according to taste. Top with fresh herbs of your choice and serve with either a crusty baguette, oatcakes or a mini beetroot and horseradish savoury macaron (recipe in my first book, Mad About Macarons)
Share this recipe

You come up with some crazy Macaron recipe Jill, Love it!

Ah la Corse,… my mum has been bugging us to go there, somehow we have never reached there, but they were planning to take the ferry one summer. Its not that far after all. It has its charm no? I always imagine how napoleon grew up there and then I wonder how that fella managed to reach so far in his life. Maybe the earth and air is different there. ^.^

Thanks, Helene. Ah Napoleon. Yes, he did well coming from a wee island. 🙂
Hope you manage to get to Corsica. I’ve always wanted to take the ferry but we take the plane from Paris as it’s far quicker. The affect of the maquis on first air contact is impressive!

Your Fruit a Day

Why we love pears in France, health benefits and our favourite French dishes using them – all on the new market produce page! What do we call a pear in a fun French expression? Read more…

Looking for your best afternoon tea address in Paris? Check out my local list of Parisian tea salons by your location.

Central in French food culture is market day. Join me at ‘our local’ to discuss recipes and random facts, how to prepare and choose fruit and vegetables – including fun French expressions using them. Allez – let’s step on the mushroom!

How do the slim French still manage to eat pastries, bread, cream and cheese? Do they really diet? Find out the first 5 tips from Julie Colonna: how to eat like the French.