What can you do if you have too many fresh cherries? Make a Cherry Clafoutis. It’s a rustic speciality from the Limousin region, traditionally made with cherries. It’s a popular family recipe that all French home cooks have up their sleeve.

What’s more, it’s one of the best ways to cook cherries. Serve it either warm, at room temperature or chilled for teatime, dessert or breakfast. 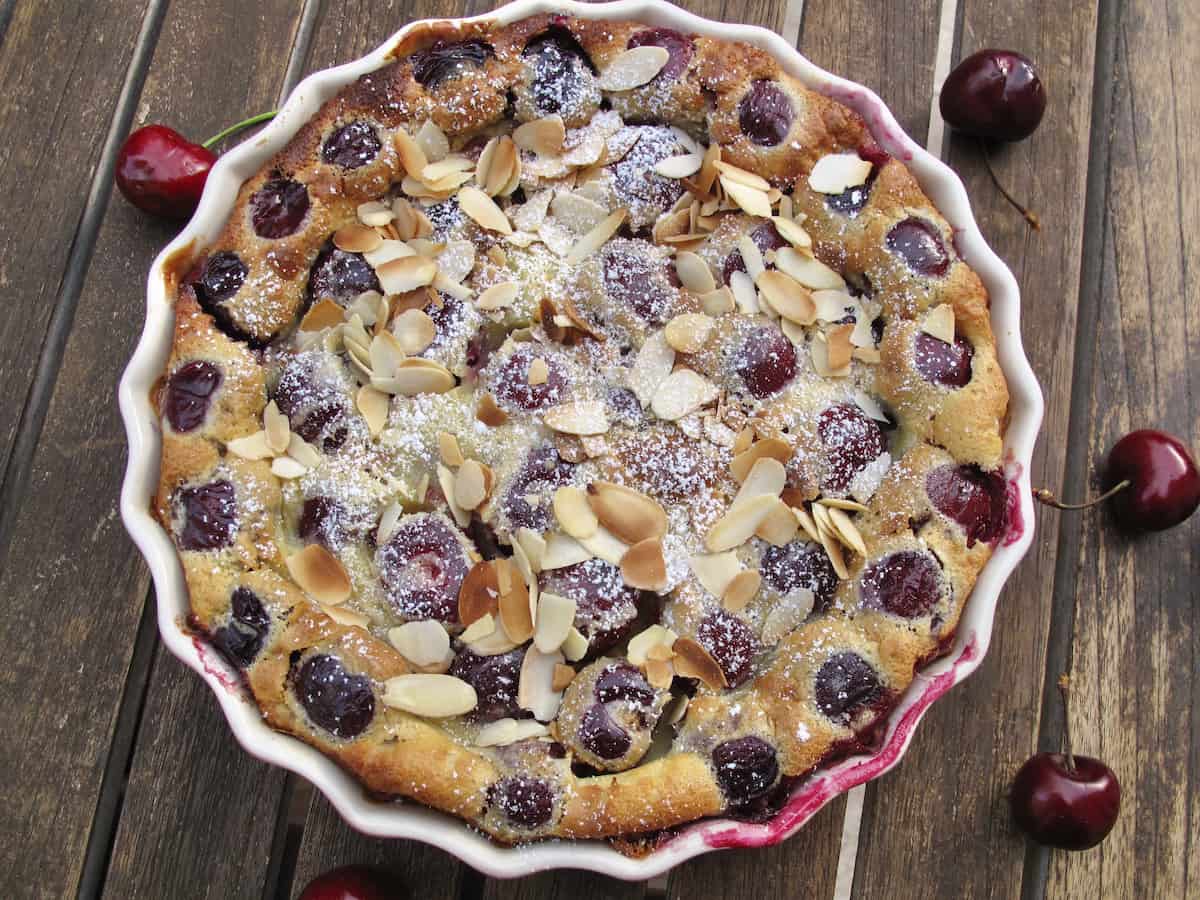 Clafoutis is simply a baked custard. So, is it eggy? Well, yes it is, as there are 4 eggs in it plus a yolk (hence the custard) but it’s not really eggy like an omelette or a savoury quiche or fruit tart. The batter is not unlike the batter used for French crêpes. Likewise, eggs are used in crêpe batter but does it taste eggy? No as there’s some flour in it.

The fresh fruits are also baked or roasted in the batter, which concentrates their flavours and makes them juicy. As we keep the cherry stones in, the result is a cherry dessert that explodes with natural flavours, with a slight hint of almond.

It’s also one of my French Mother-in-law’s specialities and one of my husband’s best loved classic desserts. If we’re lucky enough to visit Antoine’s parents in Provence in the early summer, Madeleine proudly rustles up her Clafoutis with local black or Burlat cherries. Freshly plucked from the neighbour’s orchard with his permission, of course.
For more, see our French cherry market produce page.

This recipe is such a classic but I love how French chefs create their own spin to it. For example, chef Anne-Sophie Pic’s Clafoutis adds cinnamon and butter to the batter, precooks the cherries and serves it with a cinnamon cream. Plus chef Philippe Conticini adds cinnamon – but also with hazelnut flour, orange zest and tops with a Speculoos (Biscoff) crumble.

What Does Clafoutis Mean?

According to my Larousse Gastonomique French culinary dictionary (the hard copy has a better explanation), Clafoutis comes from the ancient French verb, Claufir. Also Clafir, in modern French, means to fill (remplir) or sprinkle (parsemer). 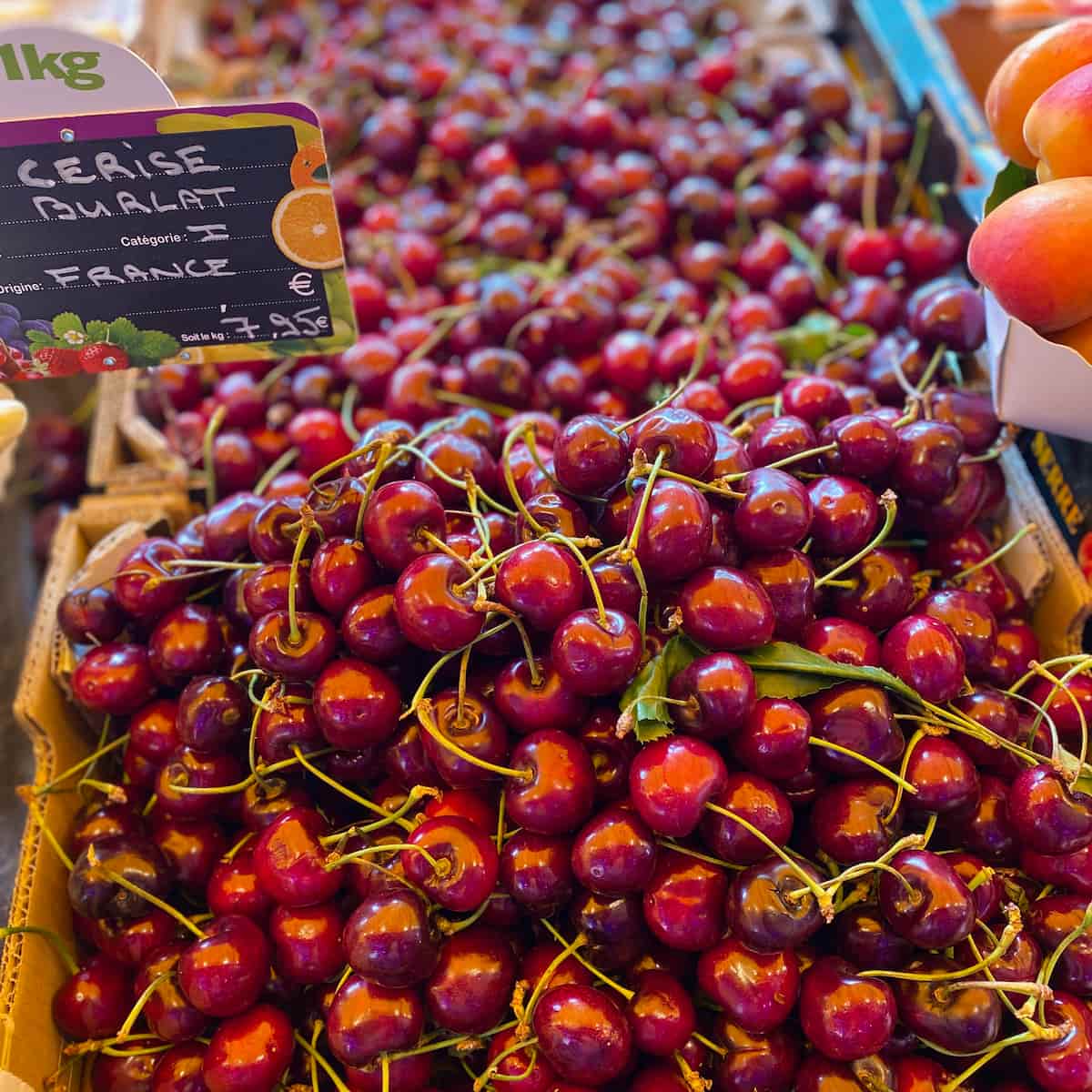 Can I Cook Cherries without Pitting Them?

So many clafoutis recipes call for pitted cherries. However, just like it’s traditionally made in the Limousin, we cook the cherries whole without pitting them. The result is that the clafoutis comes with a warning sign before eating and most of us politely dispose of the stones at the table. I say most of us, as Antoine – in his more natural Corsican style – rocks on the back of his chair, plotting his target as he catapults and projects them less than delicately into the garden, shrugging, ‘Heh, je plante!’  It’s his Corsican way of saying he’s planting cherry trees. Oh, pul-ease!

I may mock but keep the whole cherries with their stones. During baking, the stones impart their slightly almond flavour into the Clafoutis. It’s also far quicker than extracting the cherries with dark cherry-juiced hands like Jack-the-Ripper!

What’s more, there’s no need to buy any fancy pitting gadgets. So just throw them in as they are naturally and get the family to do the gardening at the table. However, if serving to those more fragile, you may need to remove the stones.

This recipe uses a little flour but to make a gluten free version, replace with half the amount of cornflour or cornstarch (Maïzena in France).

Likewise, for a gluten free version, replace plain flour with ground almonds (almond flour) as it’s such a lovely combination with summer fruits. See my other Clafoutis recipes: 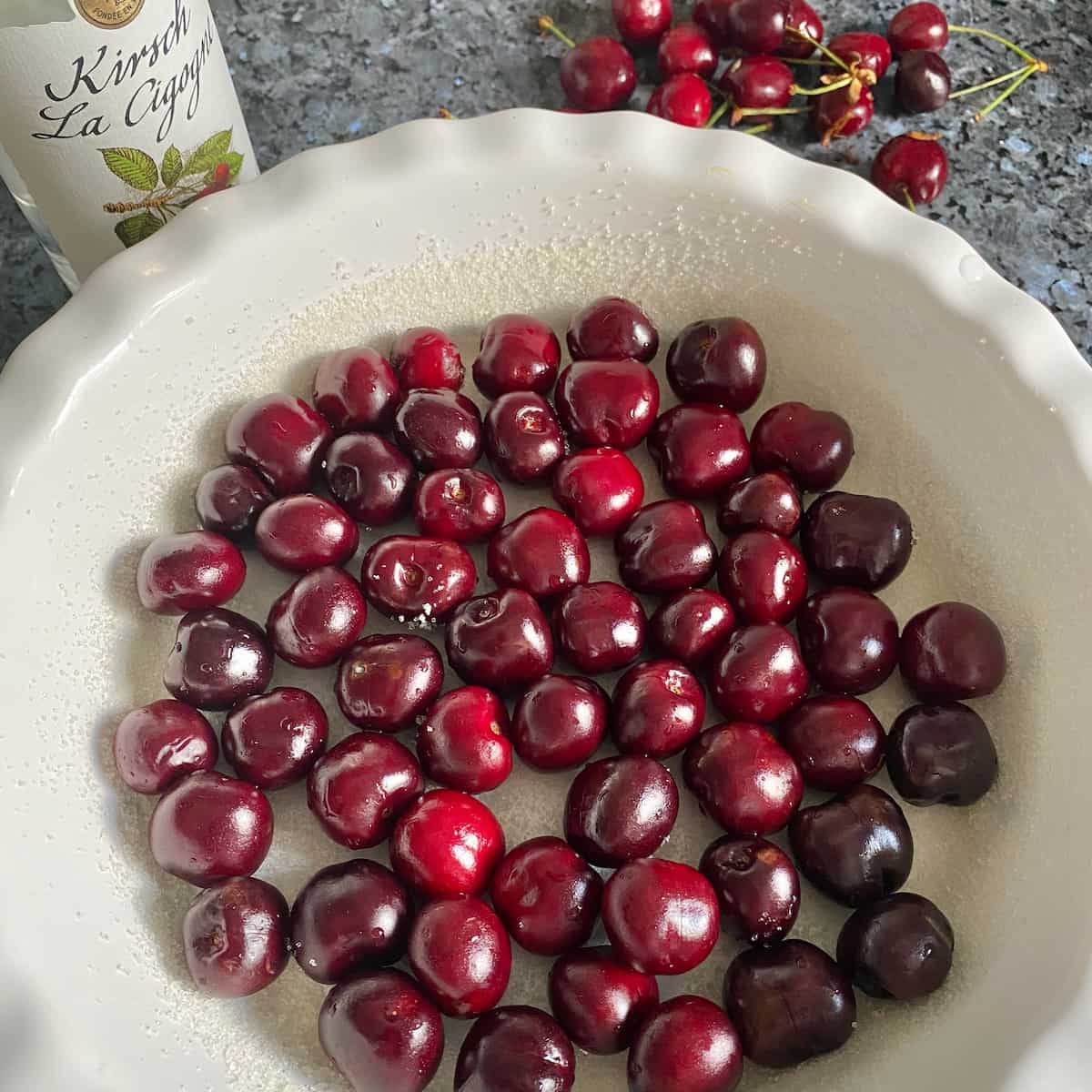 Prepare the dish: butter an ovenproof china or pyrex dish (22cm diameter and 5cm deep) large enough to hold the cherries in a single layer.  Sprinkle in the sugar, shaking it all around so that it coats the surface of the dish.

Place the washed and dried cherries in it. An easy rule of thumb for amount of cherries used is that they should fill the dish in one layer. So when baking, they will be evenly distributed. 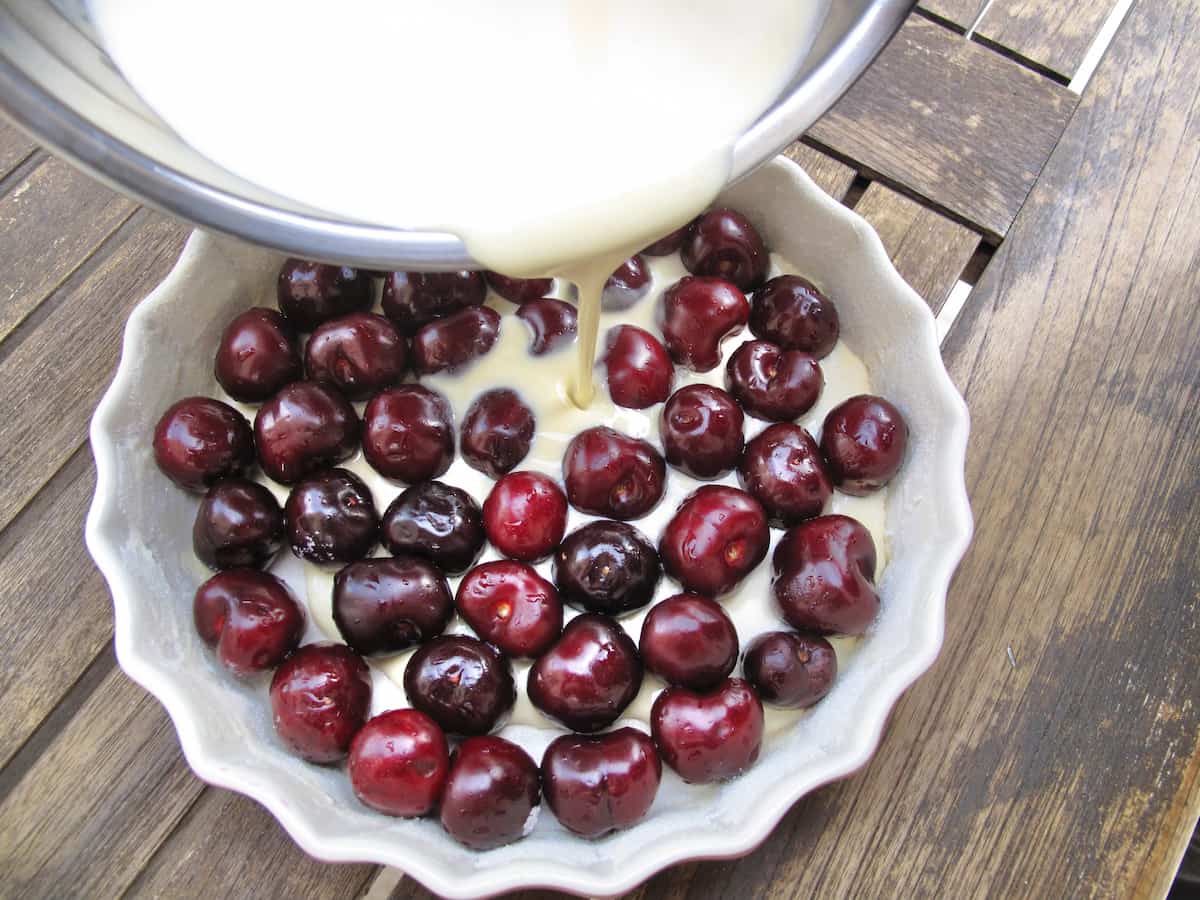 2. Prepare the batter: combine the flour, vanilla powder, salt and sugar in a large bowl. Using a balloon whisk, mix in the eggs until the mixture is smooth.  Continue whisking adding the milk and Kirsch (or almond extract). This way there will be no lumps in the batter.

I often like to add a sprinkling of slivered almonds which toast nicely in the oven, adding a lovely texture.

3. Bake for about 35 minutes or until lightly browned and set. Leave to cool slightly then lightly dust with a little icing/confectioner’s sugar.

Do you Eat Clafoutis Hot or Cold?

Clafoutis is never served hot, straight out of the oven.  First leave to cool and either serve slightly warmed, at room temperature or chilled. Serve slices directly from the dish.

Although served for dessert or teatime, we also love this chilled for breakfast or brunch on the weekends. 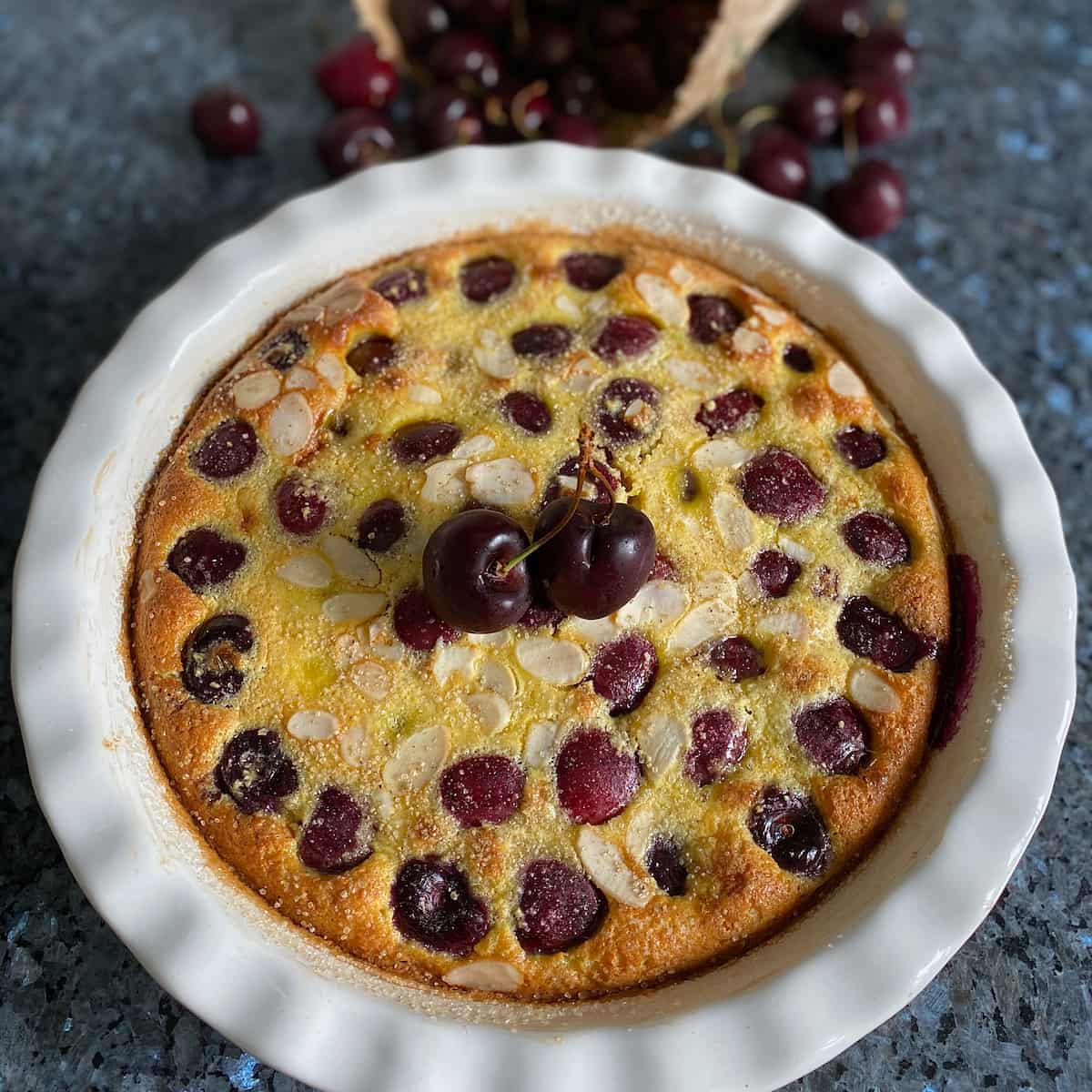 Like most French households, we make this every cherry season. In fact, you could say I could make it without the recipe! Except this time around I completely forgot to add the sugar in the batter.  In any case, there isn’t much sugar in the batter as the cherries add some of the sweetness as they roast in the oven while baking.

So I added 1-2 tablespoons of Cassonade (French light brown sugar or refined cane) on top of the baked Clafoutis once it had cooled.  As a result, I had the idea to scorch the top with a blowtorch (or toast under the grill for a couple of minutes). Et voilà : a Cherry Clafoutis in the style of Crème Brûlée is another version! 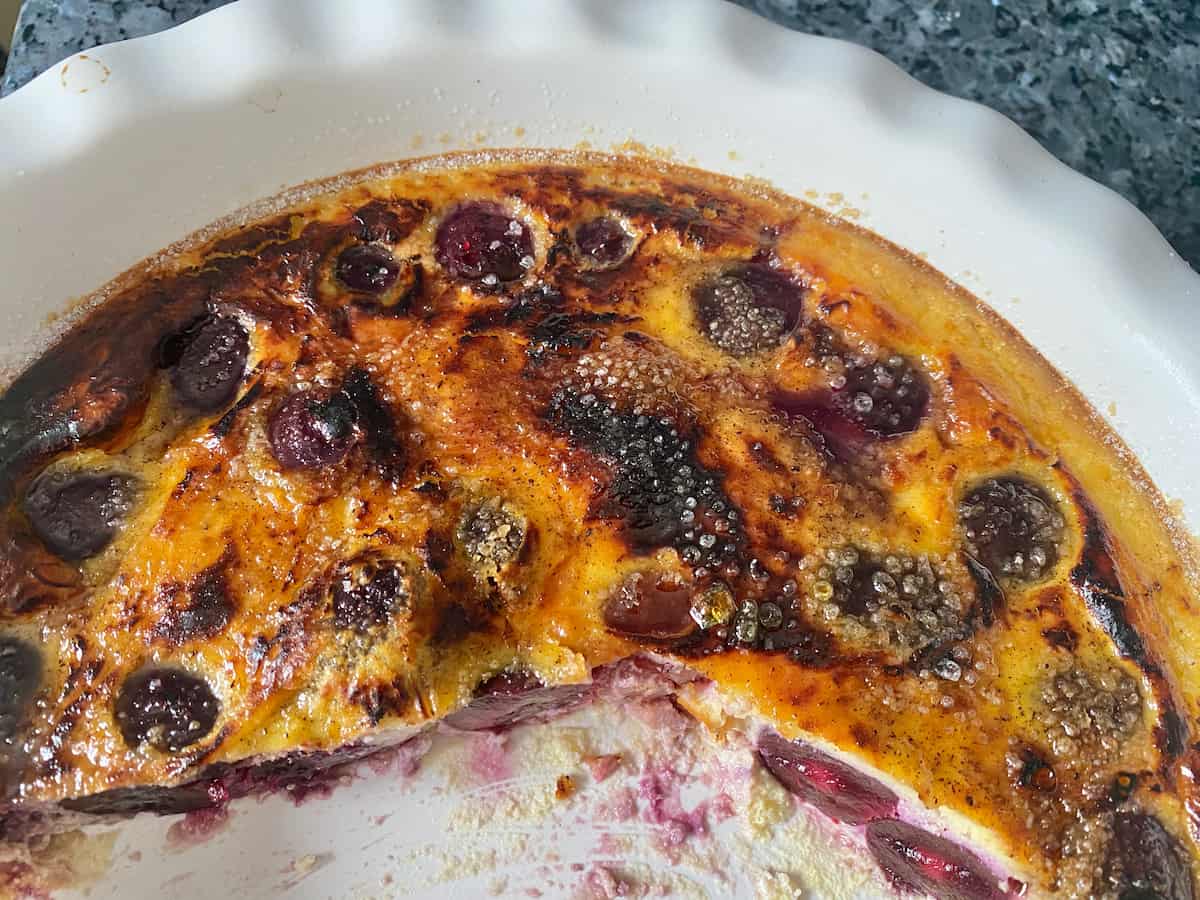 What shall we call it? A Cherry Clafoutis Brûlée? 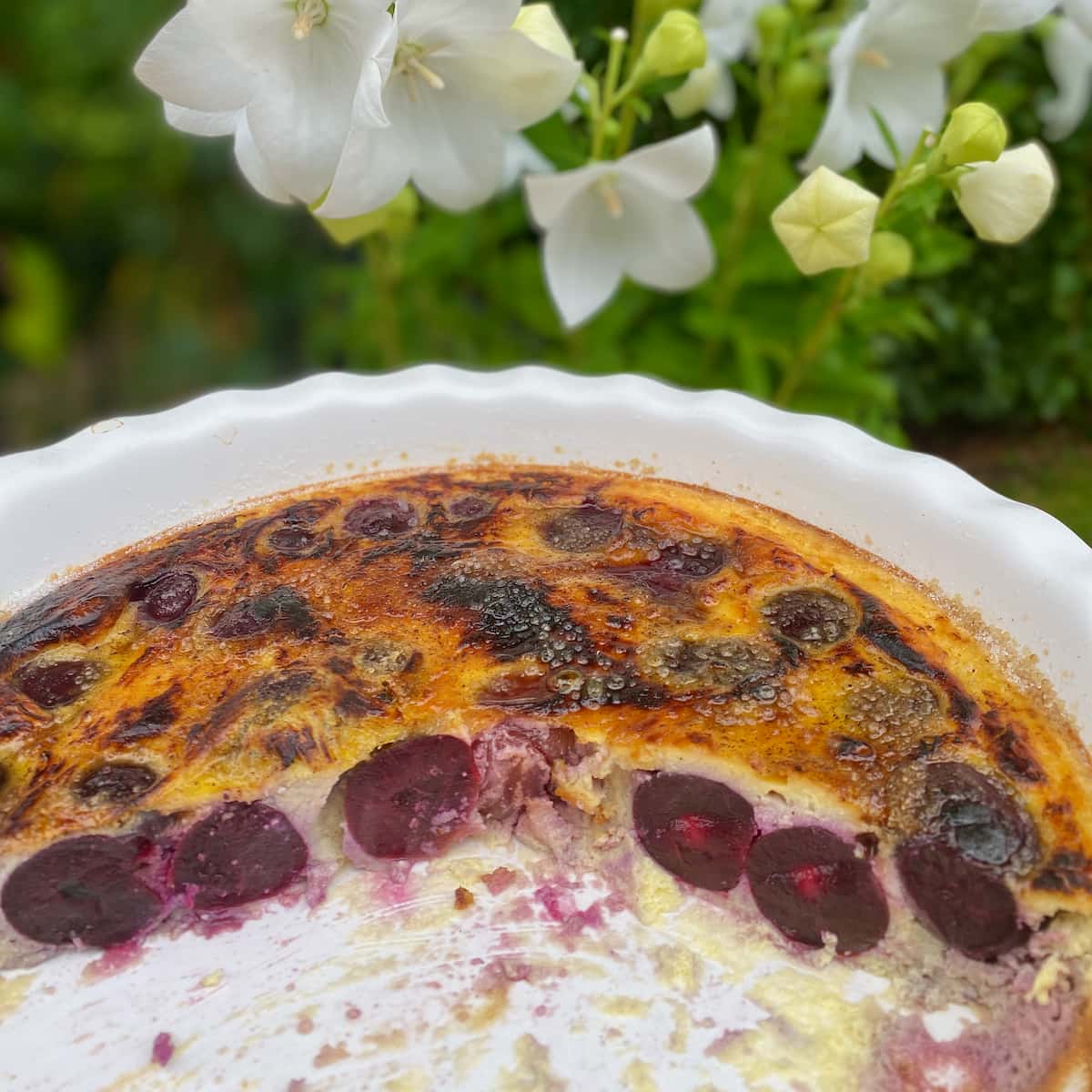 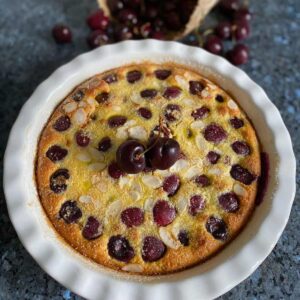 Easy recipe for the classic Cherry Clafoutis, a French speciality from the Limousin region. Serve this family dessert either warm, at room temperature or chilled for teatime, dessert or breakfast.

For the ovenproof dish:

How to Serve Clafoutis: Leave to cool and serve at room temperature directly from the dish or chilled with a light dusting of icing/confectioner's sugar. Clafoutis Recipes: This dish is also delicious made with small fresh mirabelle plums, or see my recipes for a strawberry almond clafoutis or blueberry clafoutis when cherries are no longer in season. Gluten Free Dessert: Replace the flour with half the amount of cornflour/cornstarch for a gluten free version. Cherry Clafoutis Brûlée: Sprinkle 1-2 tbsp Cassonade/light brown or cane sugar on top of the chilled (baked) dessert, then either scorch the sugar using a blowtorch or pop under a hot grill for 2 minutes.

This recipe post was first published 11 June 2015 but has now been completely updated with new images. 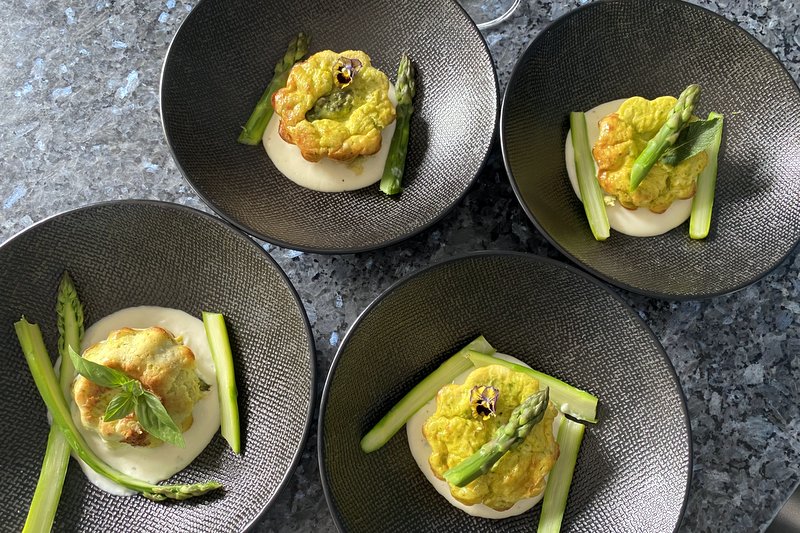 Have you tried this savoury asparagus clafoutis yet? It’s a delicious light and summery supper dish with parmesan sauce.

[…] The jeans situation could change, of course, if you indulge a bit too much in this delicious Cherry Clafoutis from Jill Colonna’s blog, Mad About Macarons. Make sure you share it with your significant other […]

Just made a 3rd cherry clafoutis. This time I told the husband that I was going to use the cherries unpitted. Now I have made 2 sans pits and 1 with the pits. I must say I LOVE the unpitted version, husband prefers his without pits. I found with the pits left in, the cherries themselves were so much more juicy and flavourful.
This recipe has now become a staple in our house. Looking forward to trying it with other seasonal fruit too.

That’s great, Tracy. Agreed on the cherries making it all juicier – and easier to prepare too without all the pitting. Here’s to everyone helping you “plant”! Don’t forget I now have updated clafoutis recipes using other fruits and a gluten-free version too:
– raspberry – lemon verbena clafoutis
– strawberry – pistachio clafoutis
– blueberry – lemon clafoutis

[…] dessert, we’re no strangers to the popular Clafoutis.  Normally made with cherries (click my Cherry Clafoutis Recipe here), it’s lovely to experiment with other seasonal fruits. As we can more or less find […]