This rustic, warming French leek and potato soup is an authentic classic. Known as Potage Parisien or Le Bonne Femme it’s served unblended and made without cream.
Not to be confused with Vichyssoise, a classic chilled potato leek soup or Potage Parmentier, which is essentially a blended cream of potato soup with only a little leek added. 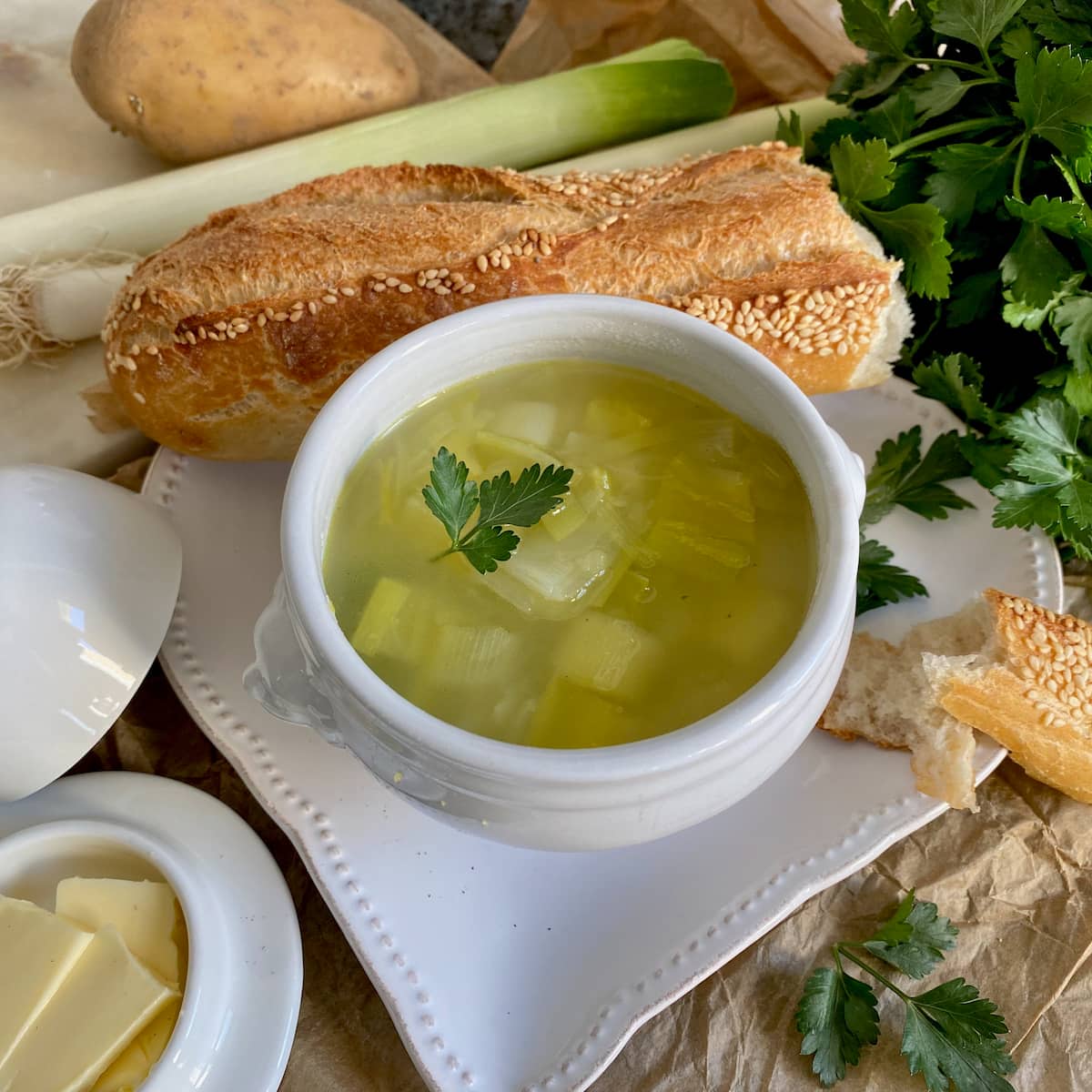 Leek and Potato Soup Without Cream

It’s funny how many recipes use cream for leek and potato soup. This authentic French recipe is thanks to no other than Auguste Escoffier from his legendary Guide Culinaire.

According to Larousse Gastronomique, this started out in history as Potage Parisien or le potage à la parisienne, a rustic, peasant-style soup base of equal quantities of leeks and potato. It uses NO cream (or crème fraîche), is made with either water or chicken stock, and isn’t blended.

In Auguste Escoffier’s Guide Culinaire, this soup was given an upgrade as of the 19th century, called Soupe à la Bonne-femme. The only difference is Escoffier adds more butter at the end of cooking and adds (as an option) that milk is used instead of water or stock.

This soup is not unlike the Potage Parmentier, referred to as a “crème de pommes de terre” (cream of potato) in Larousse Gastronomique. As the name implies, this came from pharmacist Antoine Parmentier who promoted the humble potato in France – it’s mainly a creamy potato soup with the addition of only a little leek.

For more on Parmentier, see the market page on potatoes. 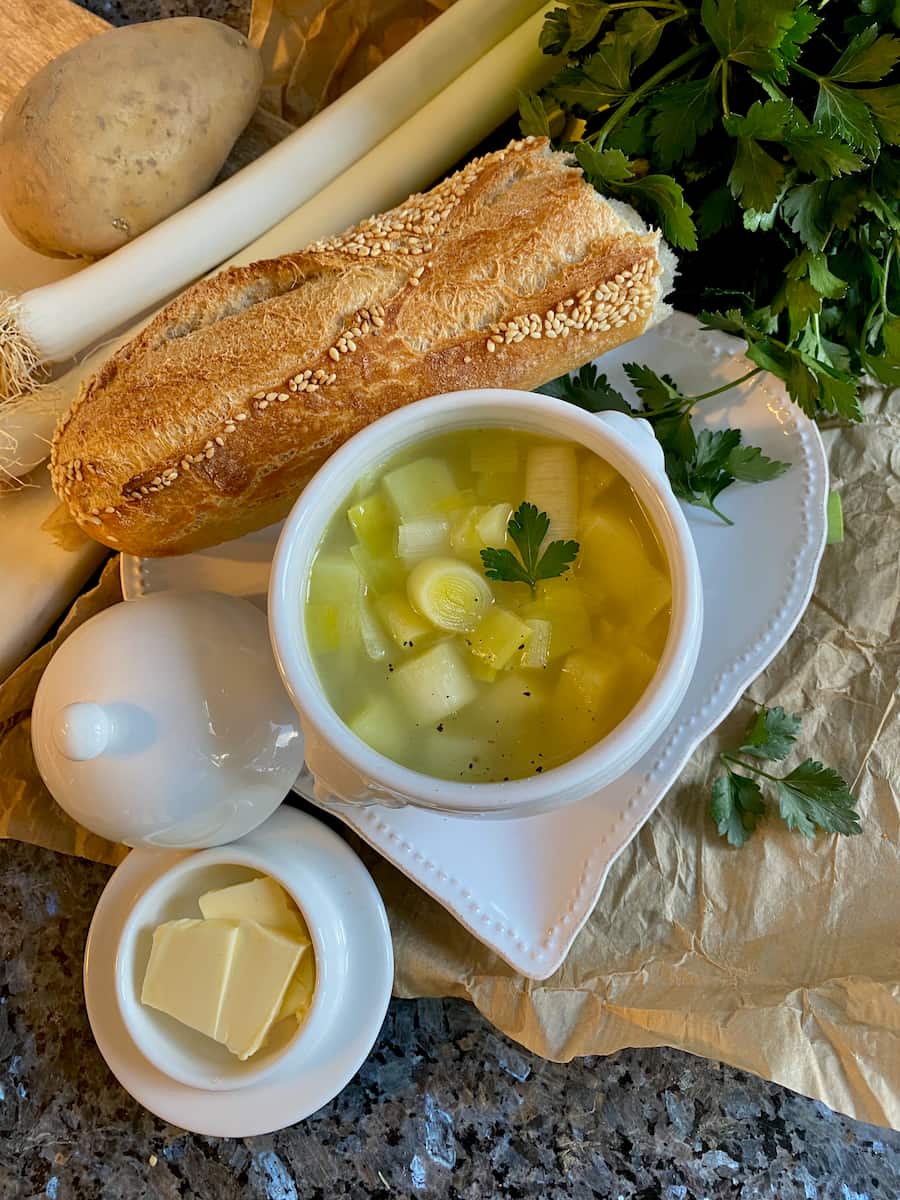 Following the airing of ‘Emily in Paris’, tourists have been walking about Paris in berets, bright coats and boots – but also some are still talking about Magic Leek Soup. Is this really a thing? What on earth is going on with all this about leeks?

This obsession about a slimming leek soup comes from French Women Don’t Get Fat. Author, Mireille Guiliano, calls leeks a miracle vegetable, as it’s basically a mild diuretic. She claimed that French women lose weight from a 2-day fad diet of purely leeks boiled in water to make a soup and, as if by magic, the calories drop. 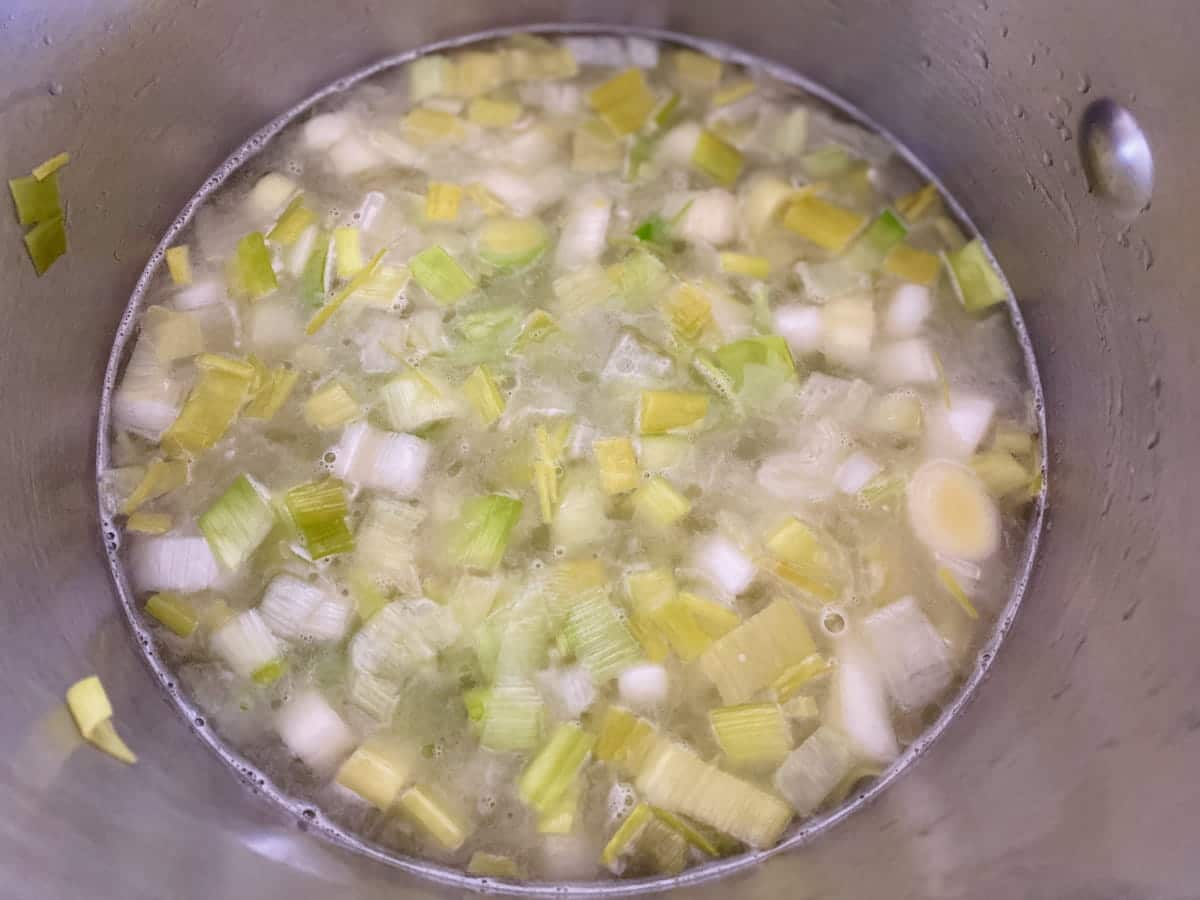 Frankly, I believe this makes eating not much pleasure and, after personally experiencing anorexia while back in Scotland, this kind of continued fad dieting could develop an unhealthy relationship with food. Instead, I have kept a steady ideal weight in the 30 years I have lived in France. How?
Simply by sticking to these first five realistic eating habits: see our 5 ways to eat like the French.

On the other hand, I first heard of leeks on French radio (RTL) many years ago while driving my (French) kids to school. The celebrity doctor explained how to boost our immune system on returning back to school for la rentrée.

To avoid colds, his simple recommendation was to eat more leeks (poireaux). Without getting into the details, leeks clean the body. 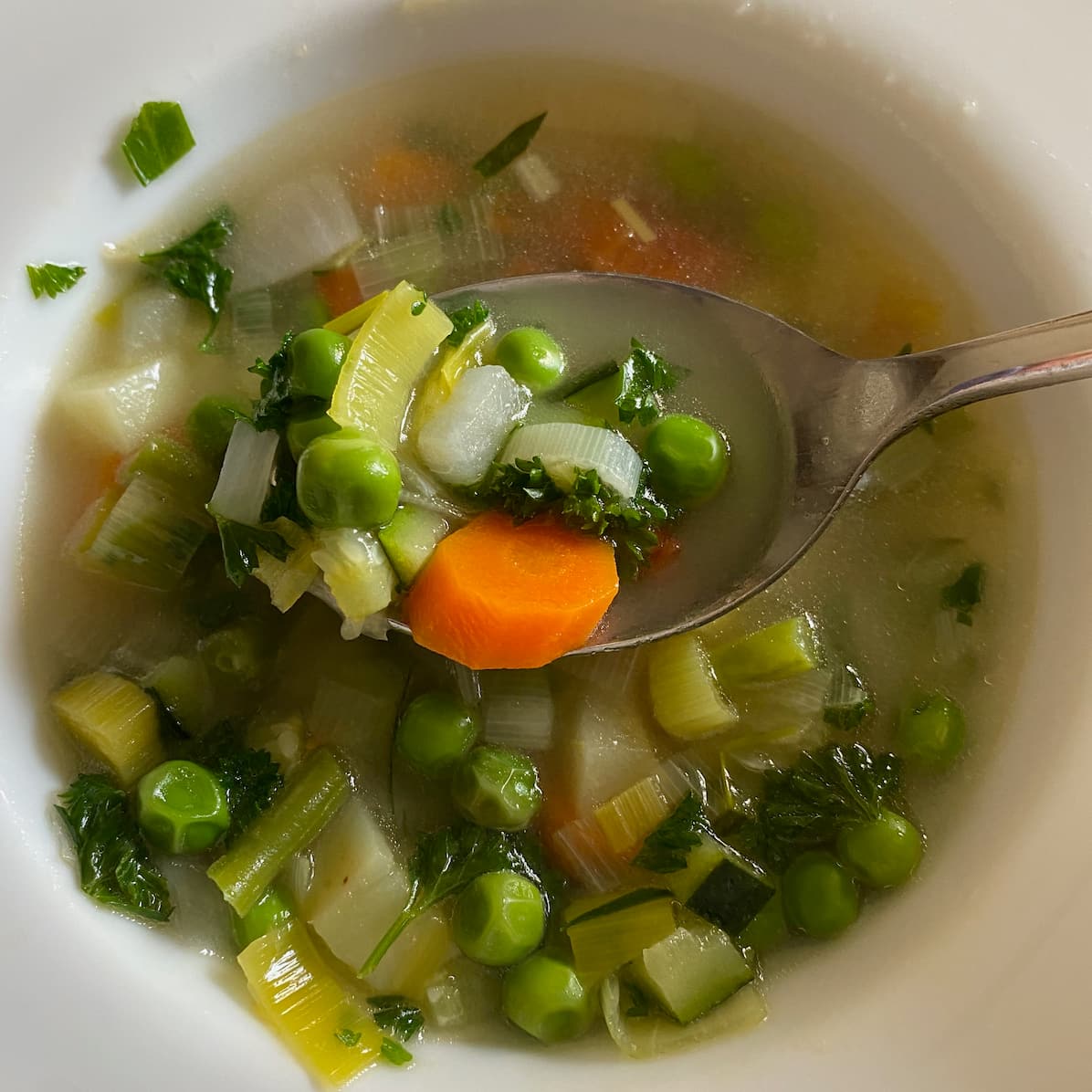 So, since then, to eat more leeks in our diet, I replaced onions with fresh leeks in many delicious soups including:

I also sautéed them in a little butter and olive oil to serve with scallops or fish. Plus added it to more French recipes, such as:

As a result of that one doctor’s brief many years ago that, over time, I use leeks a lot! 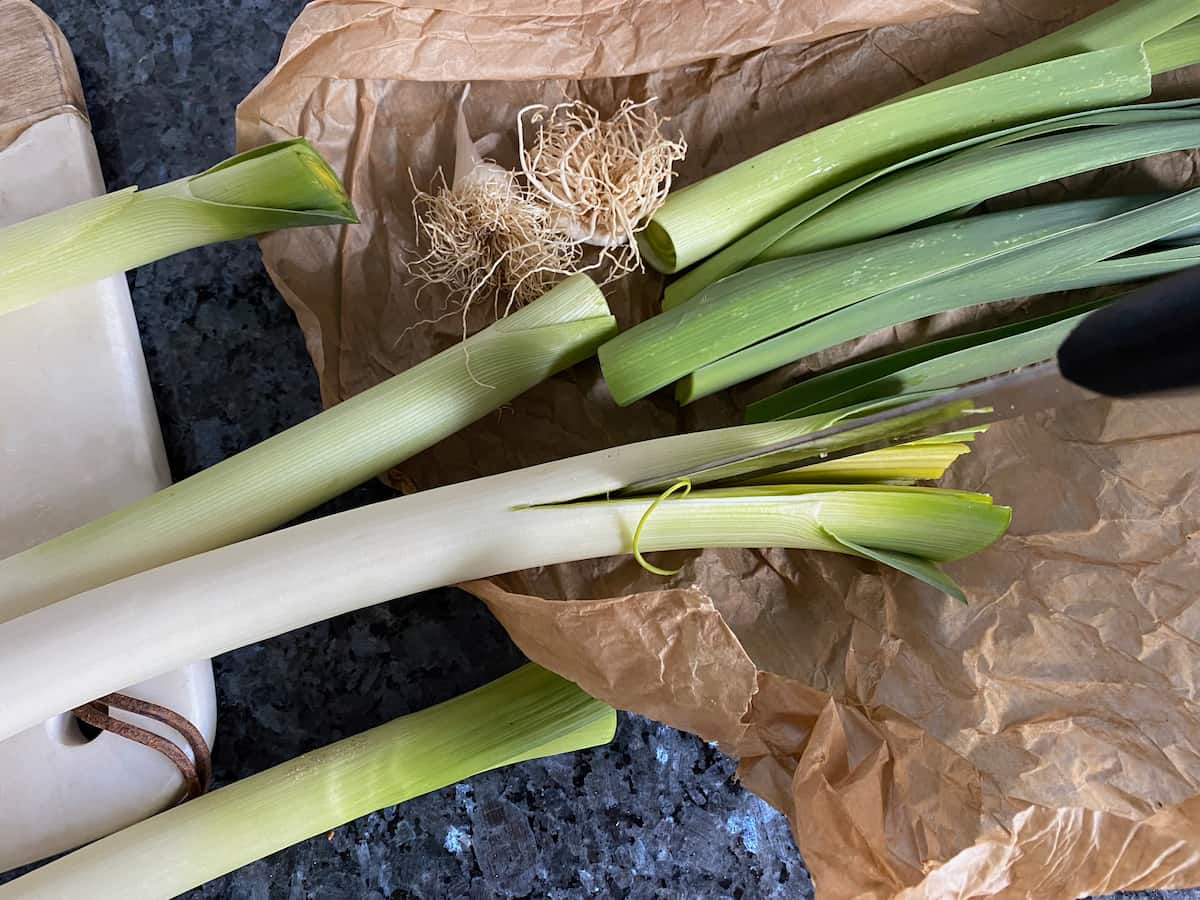 How to Make Leek and Potato Soup

Now that the different names have been studied in the French dictionaries and guides, let’s make our rustic French Leek and Potato Soup. French bowl of rustic leek and potato soup, known as soupe à la bonne femme – it’s without cream and not blended or mixed.

First wash and prepare the leeks – see how to on the market produce page on leeks (poireaux). Leave on about 5cm of the greens above the leeks’ whites and remove the root stalk. 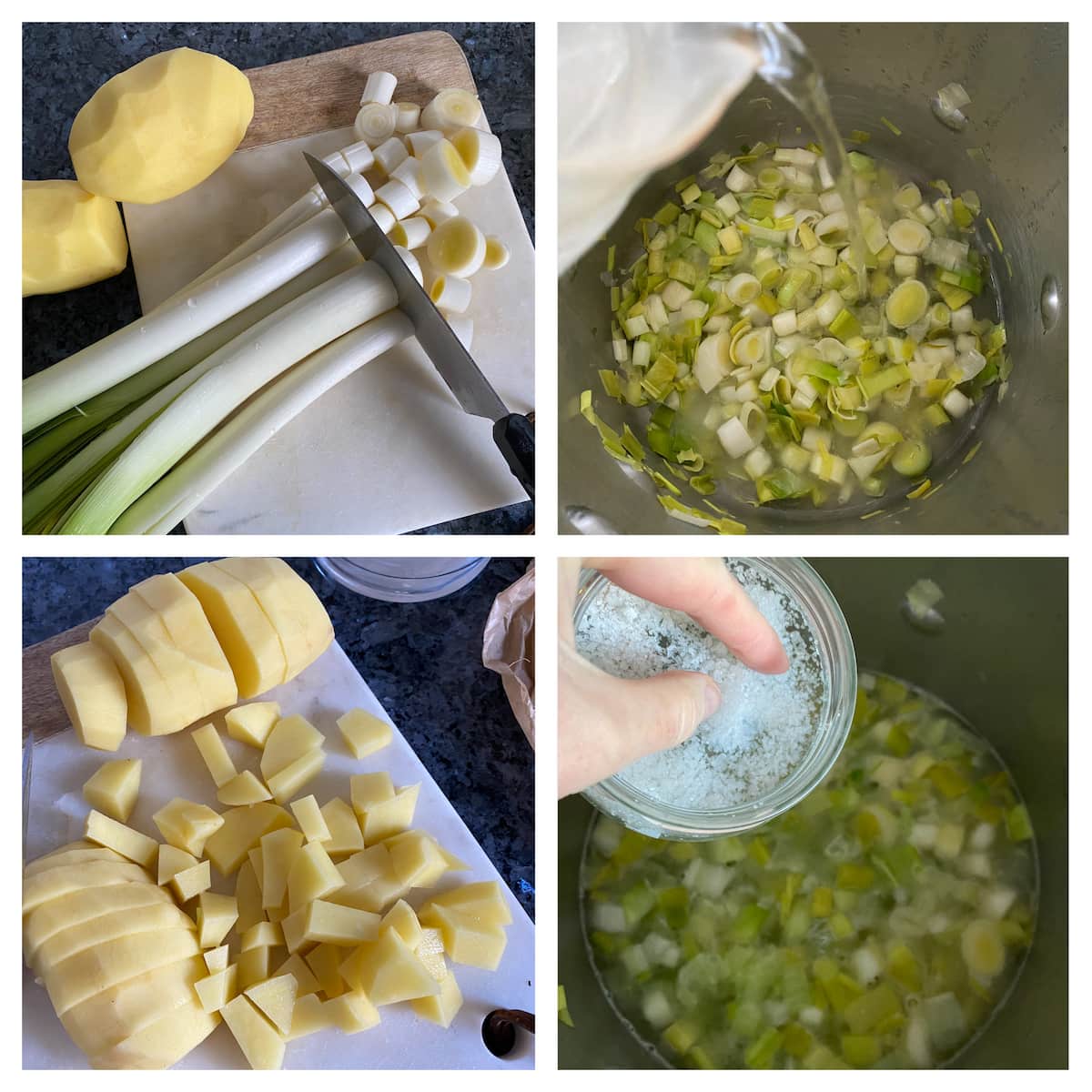 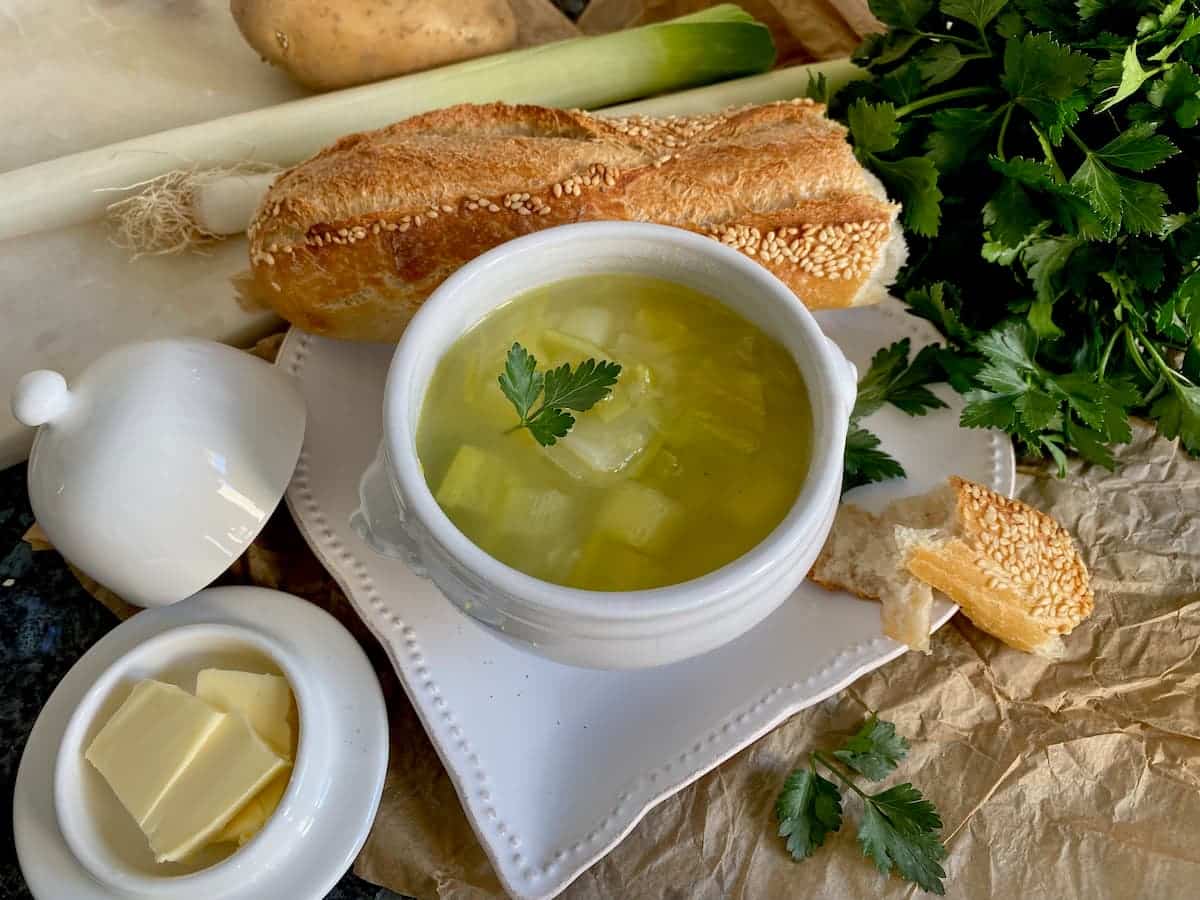 How to Serve Potage Bonne Femme

For an authentic Potage Bonne Femme, this French leek and potato soup is served piping hot with a little aromatic fresh herbs such as chervil (or parsley, as it’s easier to find). Serve with a good, crusty baguette – even better if slightly warmed with a little butter.

To add my Scottish touch, this soup would also be good with fluffy cheese scones.

It may not be magic leek soup, but the calories and taste with fresh ingredients are just as magic at only 115 calories a bowl. 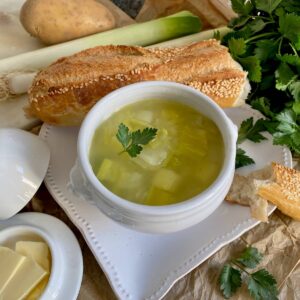 This rustic French leek and potato soup is a classic recipe from the Paris region. Known as Potage Bonne Femme, it's served hot and made without cream. No need to blend to a purée, it is traditionally just serve with all the bits.

Floury potatoes: Binje, Manon, l’Artemis, Marabel in France – otherwise Russet, Desiree, King Edward, Maris Piper, Estima.
For more, see the market produce page on potatoes (pommes de terre). Water, Stock, Milk: This authentic recipe is either made with water, chicken stock or with a little milk. This recipe is without milk or cream. To Serve: delicious piping hot with a good, crispy baguette and butter.
Share this recipe

Find the best suited dessert for your menu – from everyday recipes to more elegant for the dinner table. Try these poached pears in coffee – they are healthy too!