A walk around Paris around Easter time means seeing a huge choice of chocolate in bakeries, pâtisseries and chocolateries.

As one of the busiest seasons of the year, the artisanal chocolate shops work flat out for Easter. But what are the traditions in France for Easter and what brings chocolate on Easter in France? Let’s take a look at some of the windows and discover why we see mainly bells and fish, as well as traditional eggs on display. 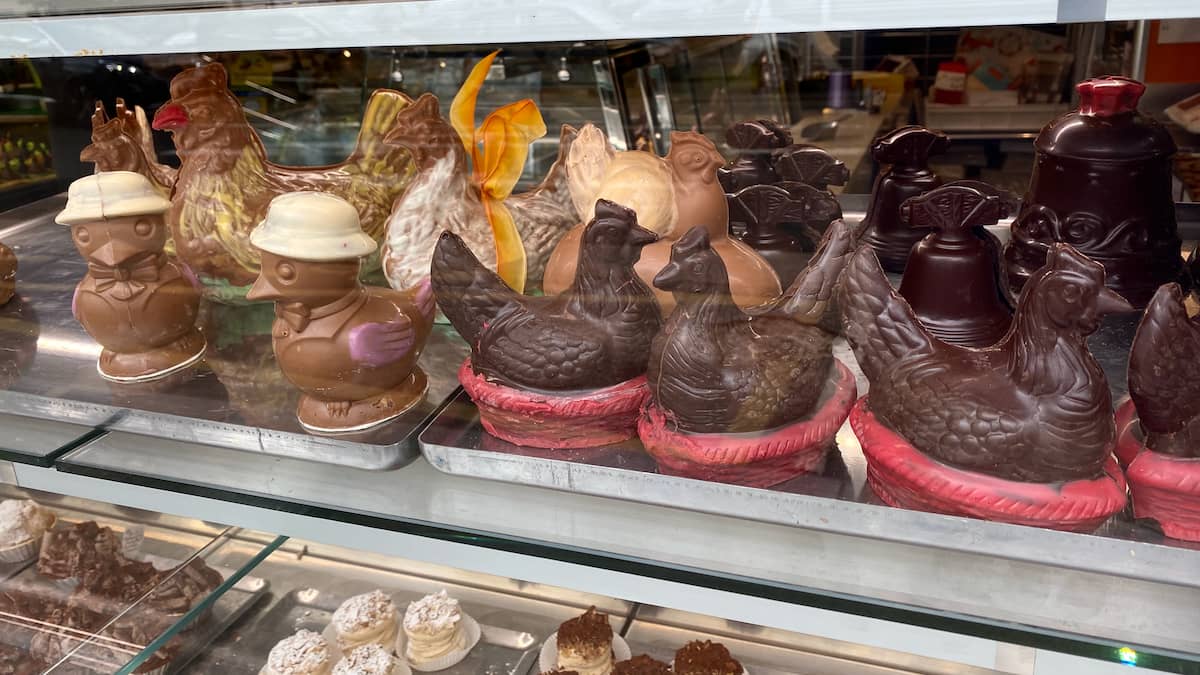 at our local French pâtisserie-chocolaterie, Avril

What are The Traditions in France for Easter?

Already the choice of eggs in itself is awe-inspiring. Most shops have us melting at the window at the array of chocolate hens, chicks, and particularly diverse with other animals this year (cats, dogs, lambs, sheep, pandas, pigs, bears, ducks, mice and bees).

There are, however, three main shapes in France: eggs, bells and fish. So before we get cracking with a sampling of Easter eggs (oeufs de Pâques), let’s start with the most typically French shapes in the Chocolateries: bells. 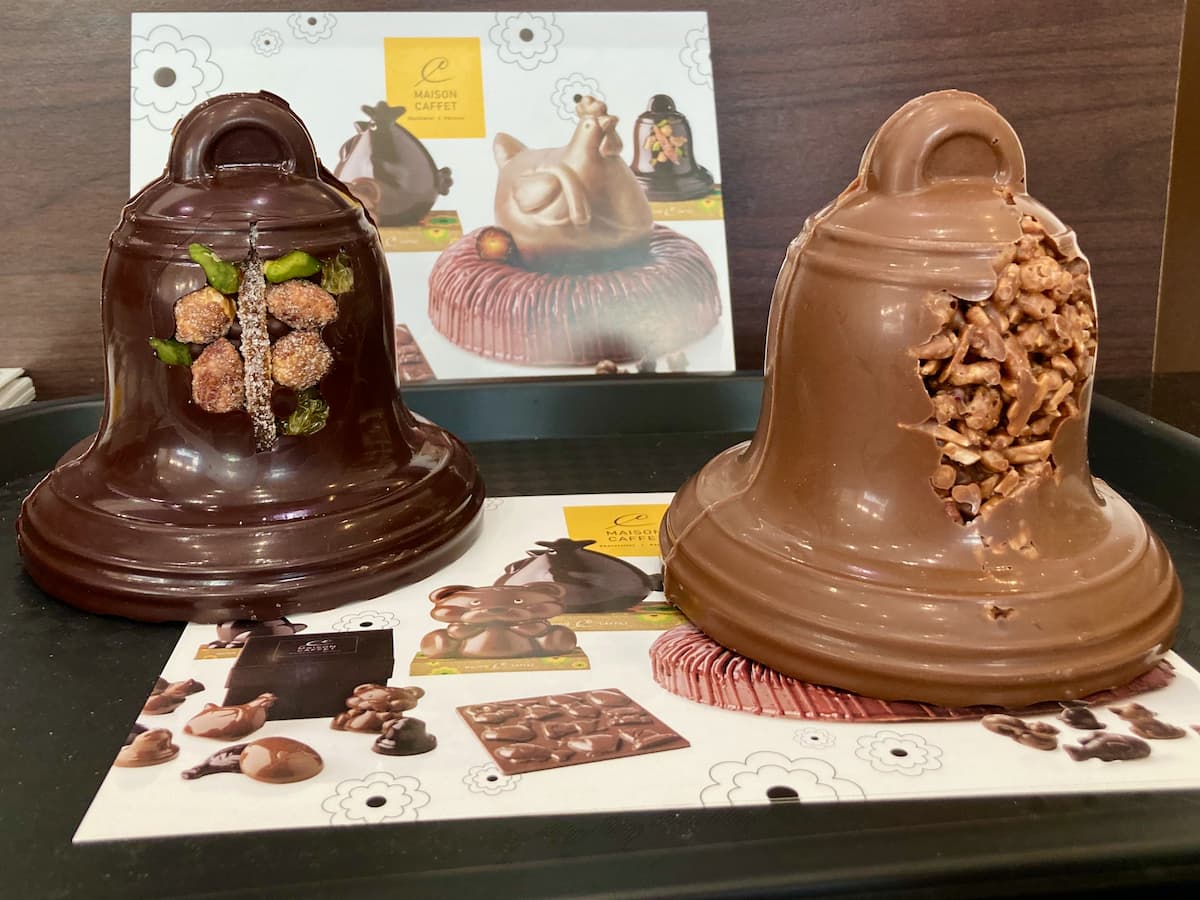 What Brings Chocolate on Easter in France?

French tradition has it that the bells bring chocolate on Easter (cloches de Pâques). Listen carefully for the Church bells over Easter weekend: in France les cloches stop ringing from Good Friday when Jesus died to Easter Sunday morning, as they have flown to the Vatican in Rome. After Church Mass, to celebrate Christ’s resurrection, the bells joyously peel around France as they fly back from Saint Peter’s in Rome, dropping chocolate eggs in gardens as the children are eager to hunt for them.

Even my French girls have found bells bringing chocolate a crazy tradition – perhaps as parents we simply poorly described it. So  imagine trying to explain to your kids that church bells had flown with wings all the way to the Vatican to be blessed by the Pope to help everyone in mourning, then returned (with no hands) to hide chocolate.

Does the Easter Bunny exist in France?

Well, no. It’s the bells that bring the chocolate and bunnies have nothing to do with eggs either (say my kids). Over the years, however, more bunnies (lapins) have gradually been hopping into the boutiques – such as these dark, milk or white chocolate cuties by Christophe & Julie Roussel in Montmartre. It’s also design bunnies at Pierre Marcolini.

While on the subject of bunnies, the equivalent of the tooth fairy in France is the mouse – so you may just see some mice around too, in the spirit of animal shapes. 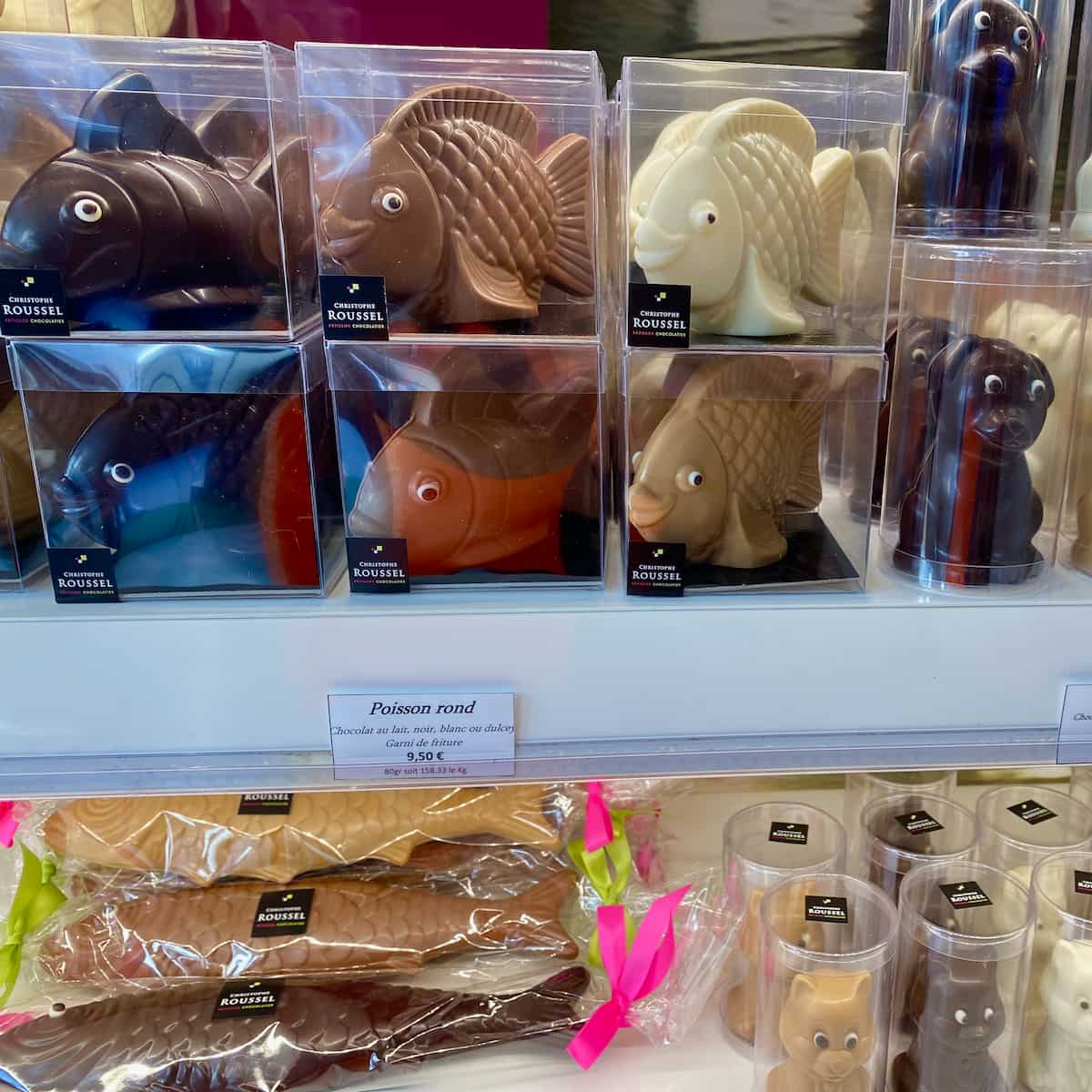 What is ‘Un Poisson d’Avril’?

I’ve always been intrigued by the schools of chocolate fish in the windows. They’re everywhere in the chocolateries.

Fish are popular around Easter, as it falls close to the 1st April.  April Fool’s Day is known as April fish in French; if you’re any decently duped April Fool in France, we don’t shout “April Fool!” but “Poisson d’avril!”

So, if caught out, you’ll probably be sporting a school of colourful paper fish taped to your back. There was one year I discovered that, after various not-so-discrete pressing into my back, I had been modelling a mobile primary school wall. 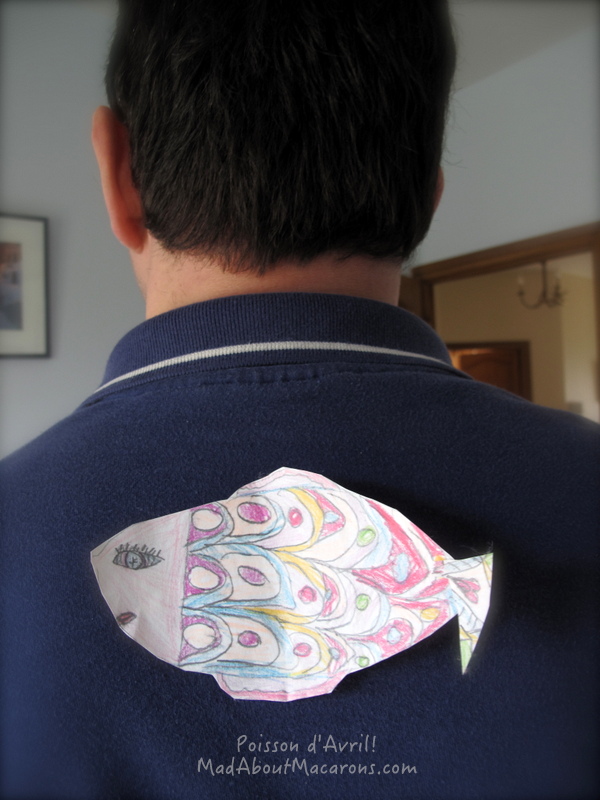 Why do the French Eat Chocolate Fish at Easter?

The fishy story remains rather unclear. Various sources cite the most popular: it goes back to the 16th Century under Charles IX reign, who changed the New Year to the 1st January.

Until then in France, the New Year started around 1st April and was celebrated by fresh fish to herald the arrival of Spring (following the zodiac sign of Pisces, perhaps). As not everyone was au courant or kept forgetting this new calendar, jokes gradually spread the custom of pinning fish on their backs. 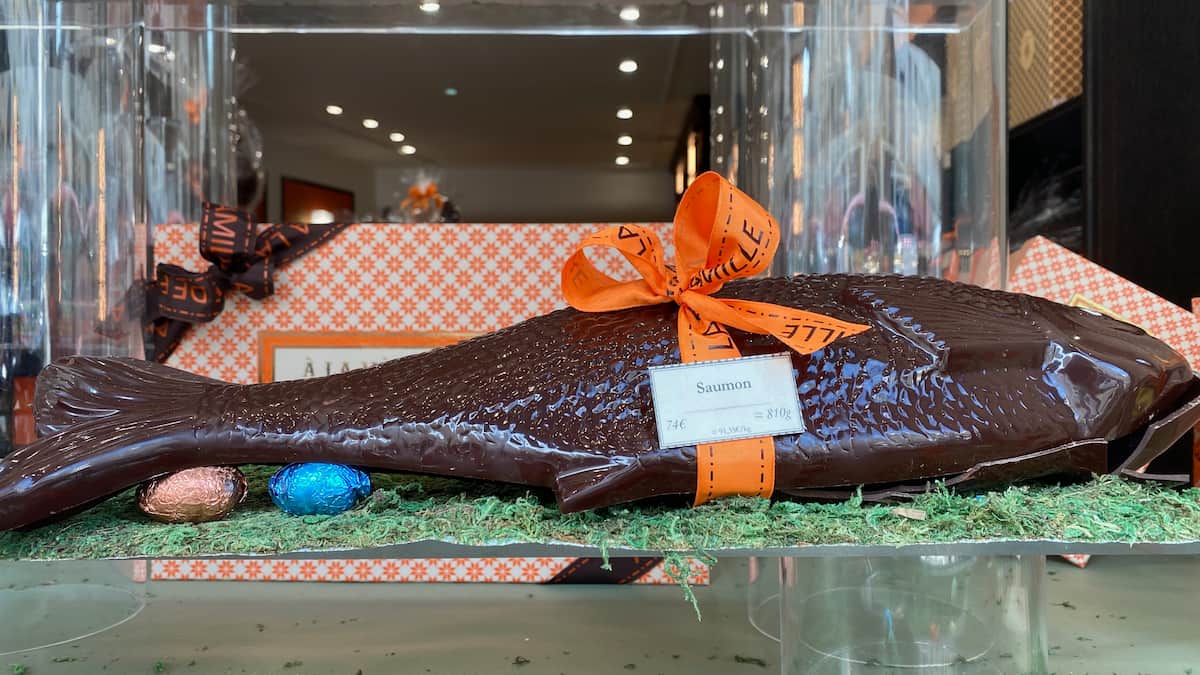 Most French chocolatiers have a huge choice of chocolate fish and scallop shells. Like eggs, many are garnished inside with mini eggs but it’s also more than likely that you’ll see miniature fish.

The smallest fish and other seafood shapes, called friture, often garnish the insides of the bigger Easter eggs or are sold simply in sachets to eat comme ça, just like that.

As with outside of France, eggs are still the most popular at Easter and over the years they’ve gradually transformed from brightly decorated hard-boiled to more chocolate.

Symbolising the Resurrection of Jesus on Easter Sunday with the rolling stone that covered Christ’s tomb, the rolling of eggs transformed death into life, bringing new life and fertility – much like a chick popping from its egg.

Swimmers from La Baule, by Christophe Roussel in Montmartre

Many high-end chocolate boutiques, confiseries (candy shops), pâtisseries, or top hotels have created their eggs from simply chic, amusing, to popular characters, or impressive giant sculptures as works of art. For example, on top of these angry looking poussins (photo above) at la Maison du Chocolat, Nicolas Cloiseau also features a feathery creation to order – and looks like they’ll fly off the shelves!

Jacques Genin normally goes wonderfully wild with a vivid, brilliant lacquered look for his masterpieces. Otherwise there are more fish and hens to choose from.

Meanwhile, many flowery eggs at Patrice Chapon. Have you tried his chocolate mousse made with 100% bitter chocolate? 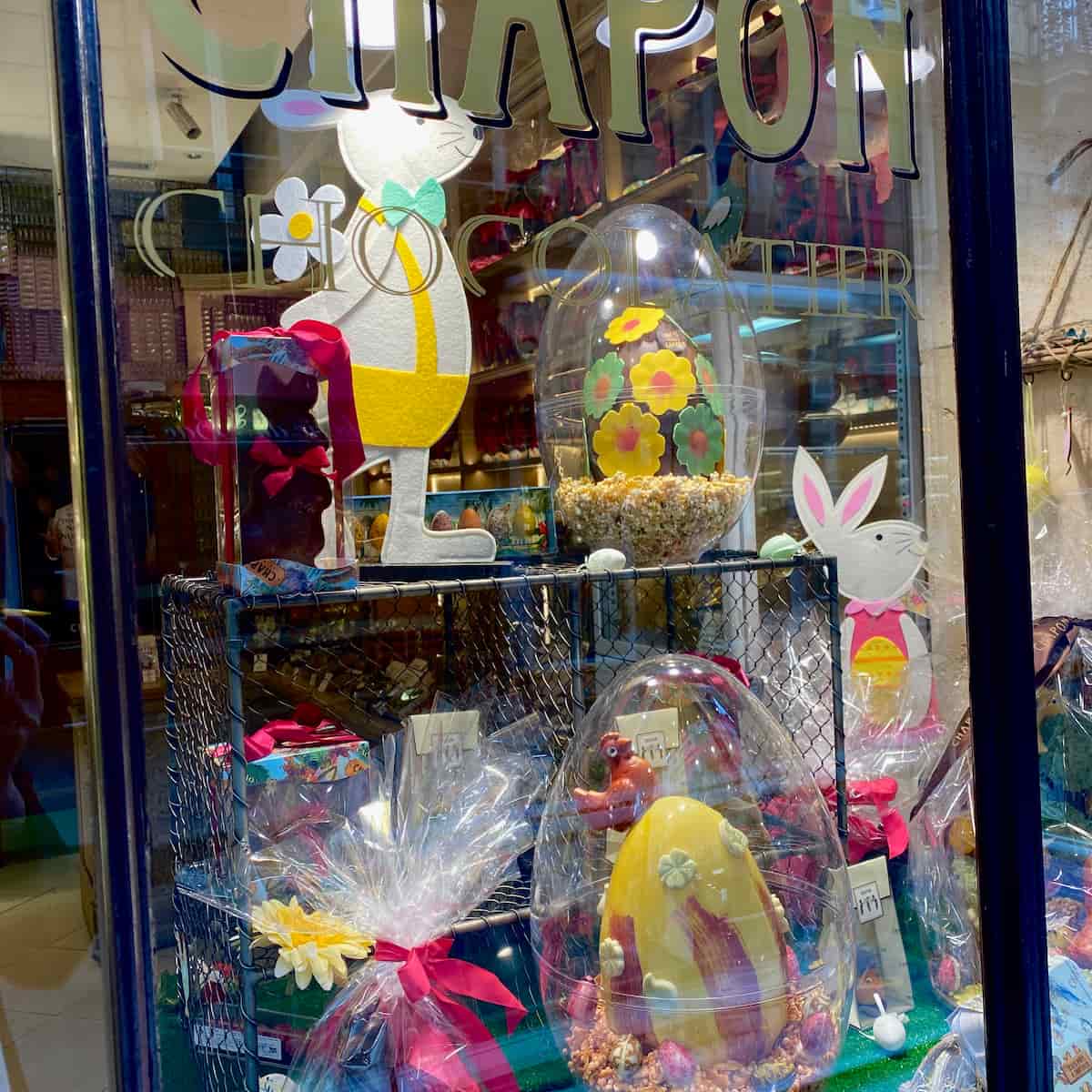 Why are there so many chicks – especially hens? During the 40-day Christian tradition of Lent, meat or eggs were not allowed to be eaten.

Meanwhile, hens continued to lay their eggs. So by the time Easter arrived signalling the end of Lent, there were so many eggs to be used. Chocolate versions simply symbolised them, plus the rolling of the eggs. Patrick Roger has lifelike chicks (poussins).

Many hens are garnished with miniature eggs and fritures – either plain or with praline. Hens are featured at À l’Etoile d’Or. Incidentally, I visited here in Pigalle this week and so an update to my article on Denise Acabo’s famous boutique is coming soon.

Love pralines? Head to Pascal Caffet, Meilleur Ouvrier de France, aka the King of praline, using hazelnuts from Piemonte. See much more in my article on his art.

Speaking of art, it’s always fun to see Patrick Roger’s annual interpretation.  This chocolatier definitely thinks outside the box and is legendary for his incredible sculptures. Here has a rather patriotic look this Easter – with a nod to the French Presidential elections taking place around the same time. I’ve added my spin of fun here with my shoes to make them all dance! 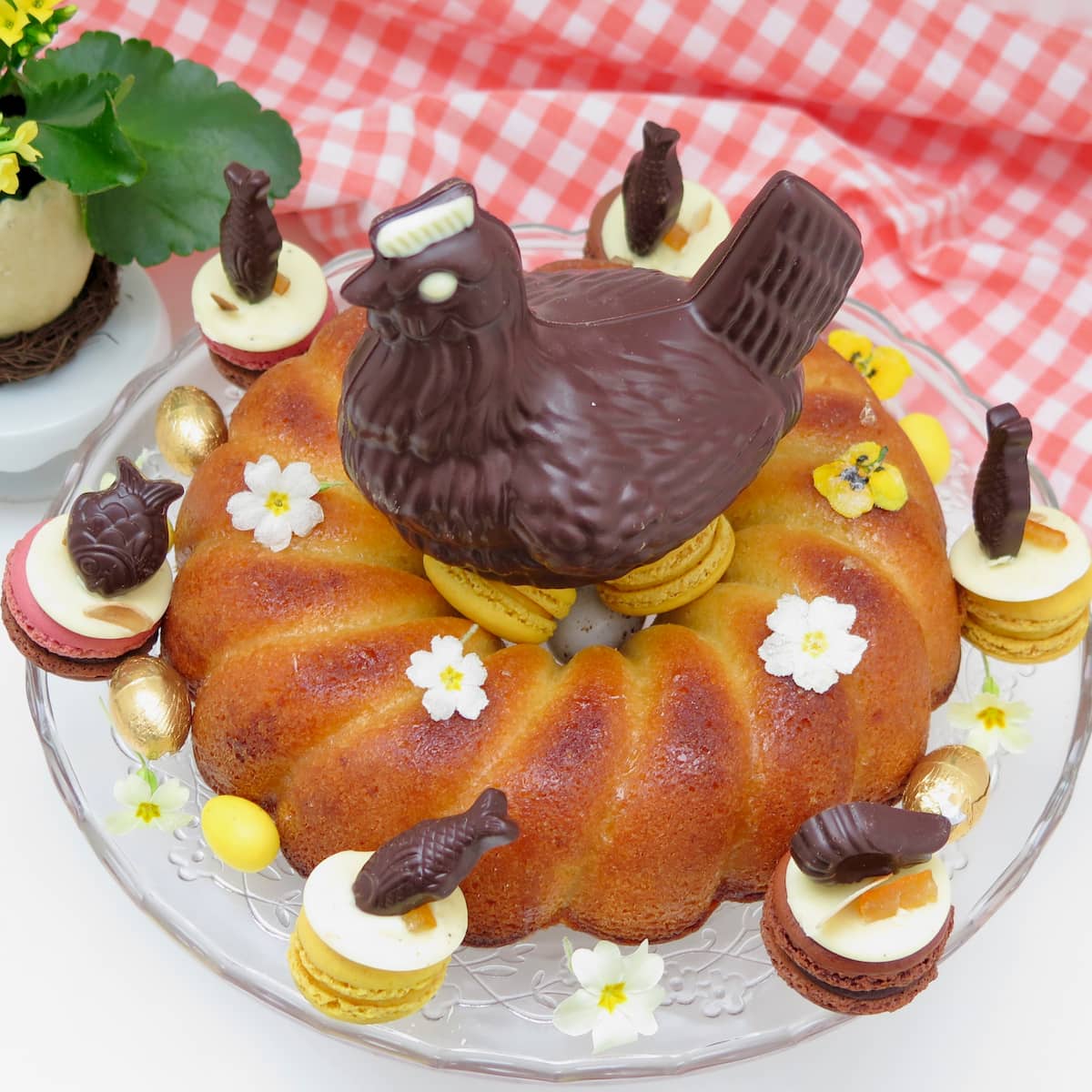 Meanwhile, here’s an idea for a chocolate hen. Make this lemon nest cake (gluten free with almonds) and have fun decorating it.

Each year, the pastry chefs from Paris’s Palace hotels release their limited edition chocolate sculptures for Spring (in February). Such creations include spectacular works of art, some animated – and are only available on order.

Other Chocolate Sculptures for Easter

Moreover, there are many more original and fun sculptures. The benchmark for giant sculptures in Paris is Patrick Roger. Individual sculptures are featuring so many animals. While visiting Denise Acabo’s boutique, she features pandas from Voisin in Lyon, for example.

As well as squirrels and frogs, spot this Marmotte in the window at Illené – for much more, see my self-guided tour in Montmartre. 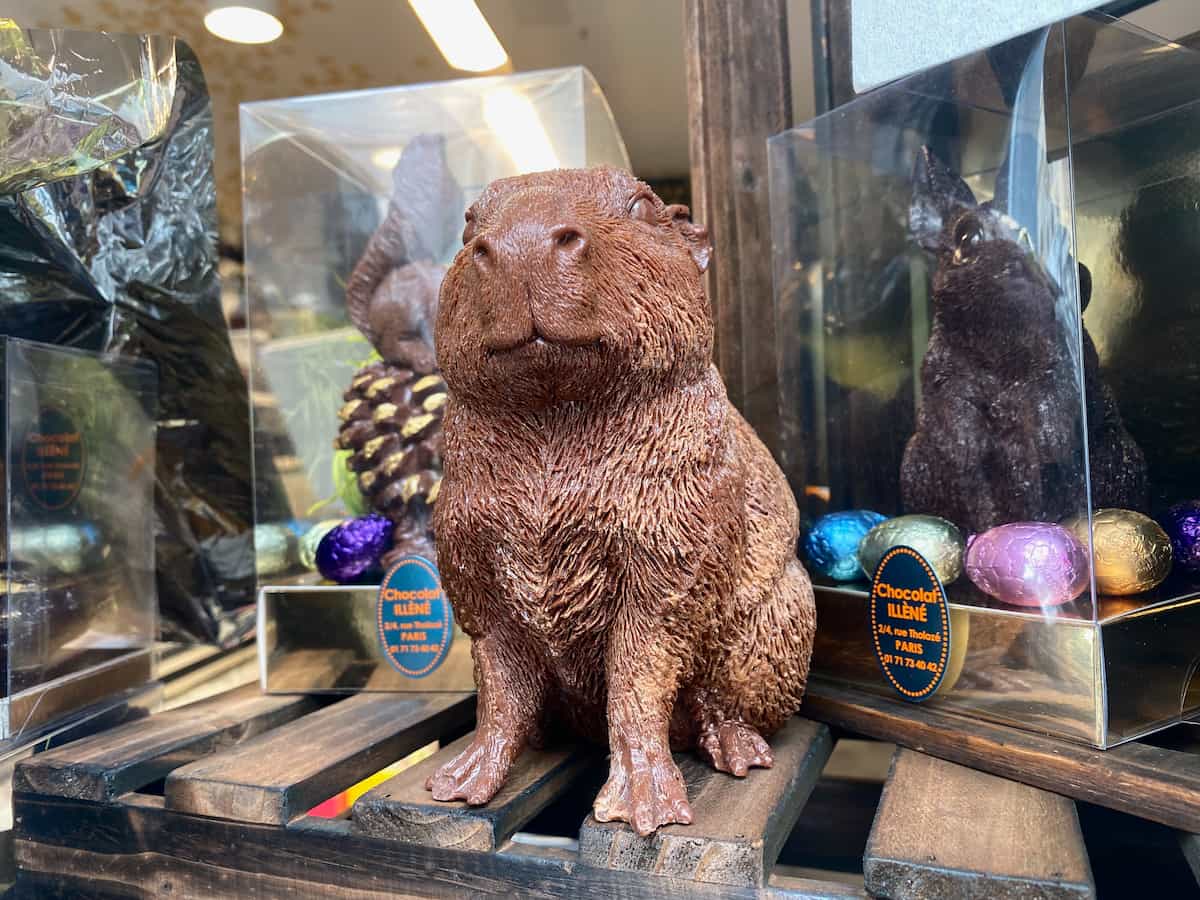 I’ll leave you with this chocolate beehive sculpture by Pascal le Gac (previously Maison du Chocolate) with a choice of mice.

To discover more of chocolate very near Paris, I recommend an afternoon to the royal town of Saint-Germain-en-Laye (near Versailles) – just 20 minutes by RER  train from the city.  See my self-guided chocolate tour for much more.

Happy Easter to you from Paris! I’ll post more on social media over the weekend and don’t forget to sign up to the monthly Newsletter, as the next issue is coming out this week-end de Paques.

This post was originally published 21 March 2016 but now completely updated, including new images.