Preparing a taster of Valentine chocolates in Paris has not been the easiest task – craving aside as I’ve been drooling in the windows – since most chocolate shops only set up their windows about a week in advance for Valentine’s weekend. Not all chocolatiers are necessarily attracted to a Valentine theme, so I’ll concentrate on them later as they gear up instead for Easter chocolates.

As you can imagine, we’re spoiled for choice in Paris, so I can’t possibly mention them all, but I’m sure you’ll find something here that tickles your fancy from 14 of the best Parisian chocolate boutiques.

If you’re into hearts, then you won’t be disappointed: the majority of chocolates are either heart-shaped or come in red-ribbon heart-shaped boxes. Some of the luxury chocolate boutiques have more emphasis on their windows, others on particularly beautiful packaging – while others are perhaps not quite as wow-factor on the presentation side, but their chocolates are definitely worth falling head over heels. Speaking of heels, Jean-Paul Hévin or Georges Larnicol will have you swooning over their chocolate stilettos, Eiffel Towers, mopeds or even pianos filled with macarons. There’s something for every budget – from the cutest of mini boxes to more decadent assorted arrangements to say I love you. 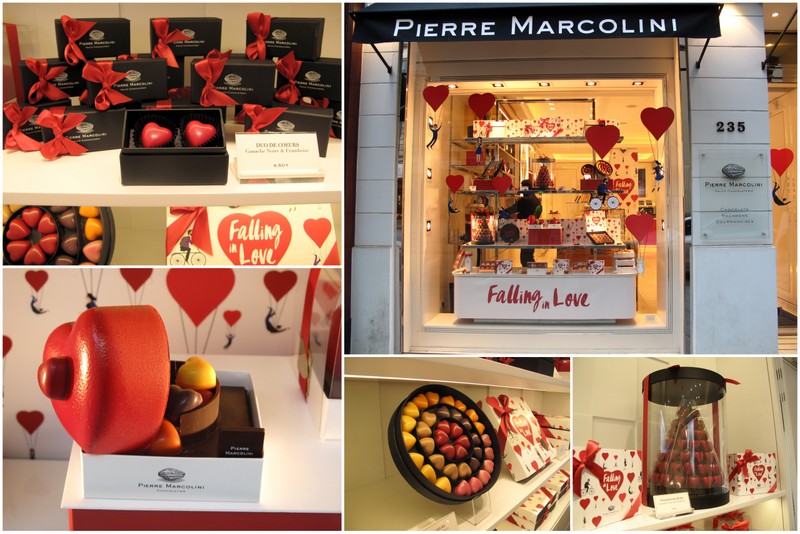 Pierre Marcolini – the double chocolatier who makes his own chocolate from cacao bean to bar – centres around his red heart raspberry chocolates available year-round but it’s all in the packaging, ranging from a mini duo box for under 5 euros to a giant cone for 99 euros. Other hearts have been designed to join in with names to create the mood: Seduction (raspberry pulp), Passion (milk chocolate-passion fruit), Frisson (white chocolate-lime), Tendresse (Montélimar nougat praline), Plaisir (Iranian pistachio praline), and Douceur (salted butter caramel).

Patrice Chapon is another chocolate maker who creates his tablets and stunning chocolates from bean to bar. His window in rue du Bac shows off his famous Smileys along with Valentine pink hearts and rather catchy-kissy red lips. Chocolate-moulded hearts and lips are also featured at Dalloyau, but admittedly my heart is beating to unlock their duo of pastries for two. Also well known for his chocolate kisses, Christophe Roussel continues his seductive selection of kisses and sweet hearts in Montmartre.

Foucher, also in rue du Bac, has been there since the shop opened in 1819. Their heart-shaped milk and dark praline-filled chocolates are perhaps for those with a sweeter tooth. Red fruit calissons (sweet marzipan confections from Aix-en-Provence) add a different red touch.

It’s still hearts galore at Le Chocolat Alain Ducasse with a large heart to be enjoyed à deux: either a dark chocolate coconut-passion, or a milk chocolate praline.

La Maison du Chocolat is celebrating Valentines not just with heart-shaped boxes but the emotion of love’s infatuation with that frisson feeling or quivering. Nicolas Cloiseau explores this through his chocolates and has created a “Pop” gift box containing four themed chocolates, each provoking a slight shudder with the play of chocolate and fruity acidity or salty surprise. 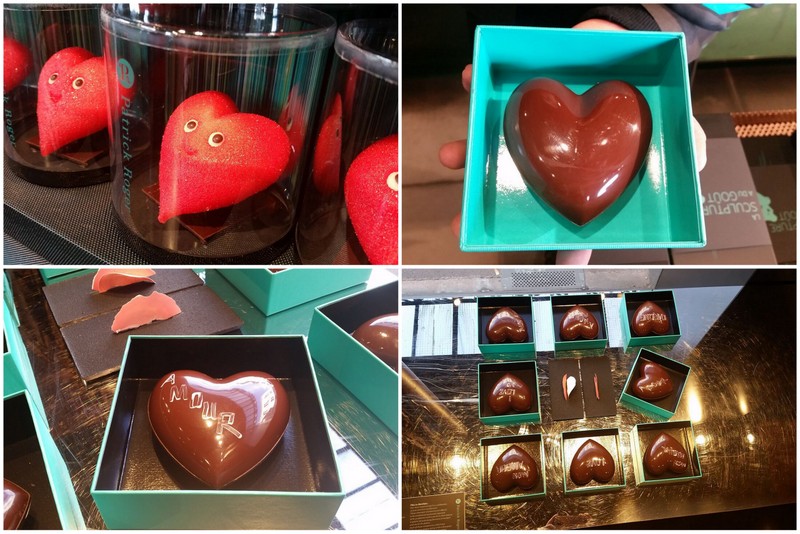 Patrick Roger, Meilleur Ouvrier de France (or MOF, the highest accolade given to French craftsmen in their field) is known best as the chocolate sculptor who thinks outside the box. You’ll find his latest masterpiece, Rodin’s “The Thinker”, sculpted in chocolate in all of his nine Paris boutiques – you can still see his work in the entrance of the newly renovated Rodin Museum in Paris until 21 February. While his love hearts are filled with an assortment of chocolates, I can’t help falling for his bright-eyed marzipan hearts. 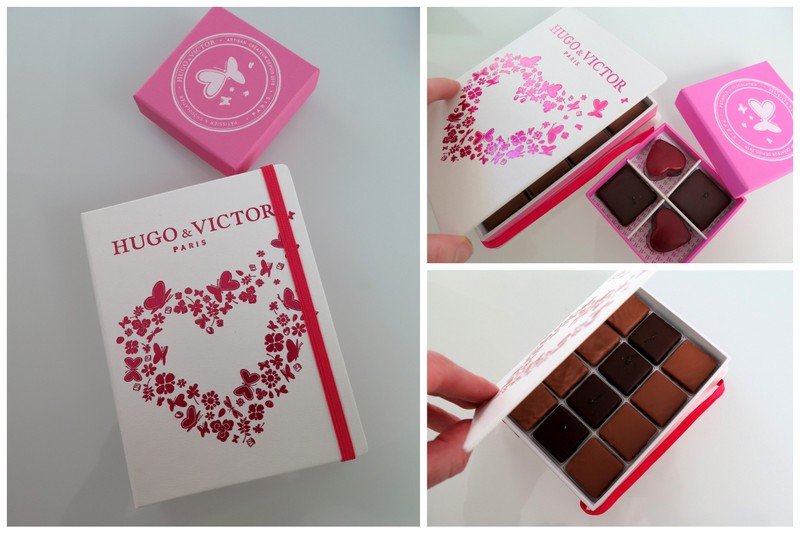 No need to “book” your Valentine Chocolates from Hugo & Victor, Paris

Have that fluttery feeling of butterflies in the stomach? Then head to Hugo & Victor with their heart and butterfly theme – and there’s no need to “book” your valentine chocolates here! 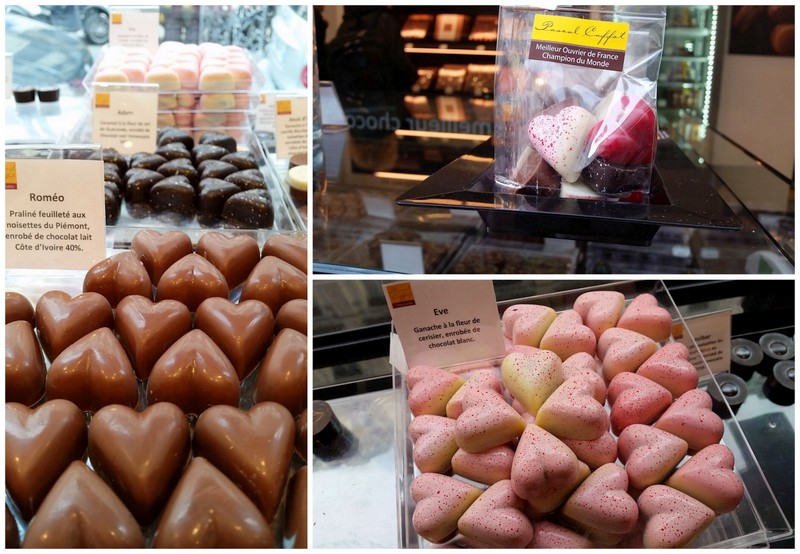 Another Meilleur Ouvrier de France, Pascal Caffet is King of pralines, using hazelnuts from Piemonte. But first I was introduced to Adam, a dark 70% Venezuelan chocolate with a heart of salted caramel ganache, and Eve, a subtle cherry blossom ganache dressed in white chocolate. On the other hand, Romeo, an Ivorian 40% milk chocolate with his crispy praline heart doesn’t yet have a Juliette – so I’ll just take at least a couple of Romeos, please. I’m hoping that next year Juliette turns up as a dark praline seducer like her other half but in the meantime, I found another “Dark Favourite” of 70% dark chocolate topped with a heart, containing a praline mix of Valencian almonds and Piemonte hazelnuts. 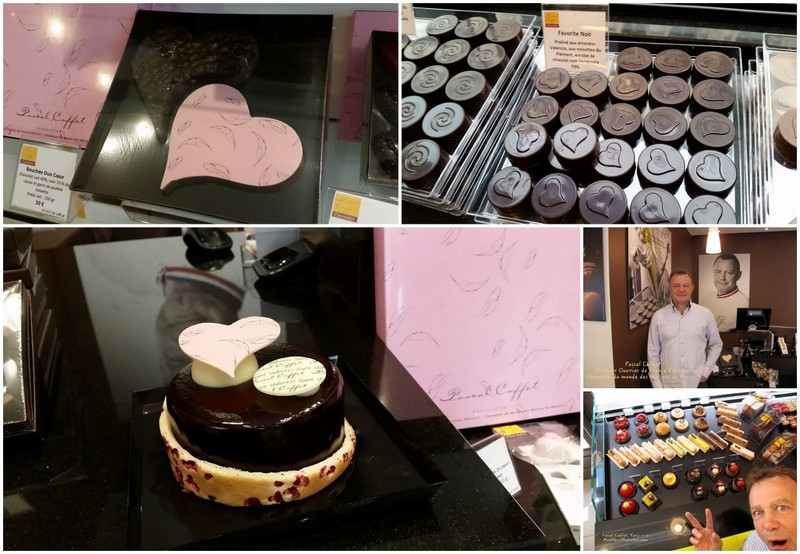 Pascal Caffet – for a MOF, he’s just as wonderfully nutty as his pralines

I know. This was meant to be just about chocolates but I couldn’t resist the look of Pascal Caffet’s frozen Valentine’s dessert for two, the Cocooning: 70% dark Venezuelan chocolate mousse and biscuit, red fruits and Bourbon vanilla crème brûlée. See? Don’t get me started but I’m swooning at the patisseries again. Philippe Conticini says “Say it with a Cake” and entices us into the Pâtisserie des Rêves with his glistening red Pommes d’Amour.

There are many more new stunning patisserie beauties arriving in the shops at the end of the week, just in time for your Valentine’s weekend. Pastry chefs are showing some tempting teasers of classic large macaron hearts filled with raspberries: Pierre Marcolini adds vanilla and yuzu, Angelina adds rose and redcurrants for a “Heart to Heart” and although Pierre Hermé couldn’t have a Valentine’s Day without his famous Ispahan macaron heart of rose, raspberry and litchi, his 2016 creation is a “Venus Heart” of quince, apple and rose. Dalloyau may still have a heart but also a second pastry for two shaped as a love padlock. The most incredible I’ve seen so far is the “Cache-Coeur” from Un Dimanche à Paris with a heart suggesting a rather heart-shaped bust below a plunging neckline. Oh-là-là!

In the meantime, for multi-taskers, celebrate the Chinese New Year and Saint Valentine’s together. The Pâtisserie des Rêves are saying it with fortune cookies containing love messages. And if you’re planning on Popping-the-Question, then even that hidden message can be easily organised too!

Happy Sweet Valentine’s Day from Paris! Go on – melt your other half…

This article is featured on the Bonjour Paris Publication.

Recipes for your Valentine

9 responses to “Valentine Chocolates in Paris”