How to make the most delicious passion fruit and vanilla cream filling for giant raspberry macarons. An egg yolk recipe for macaron lovers. 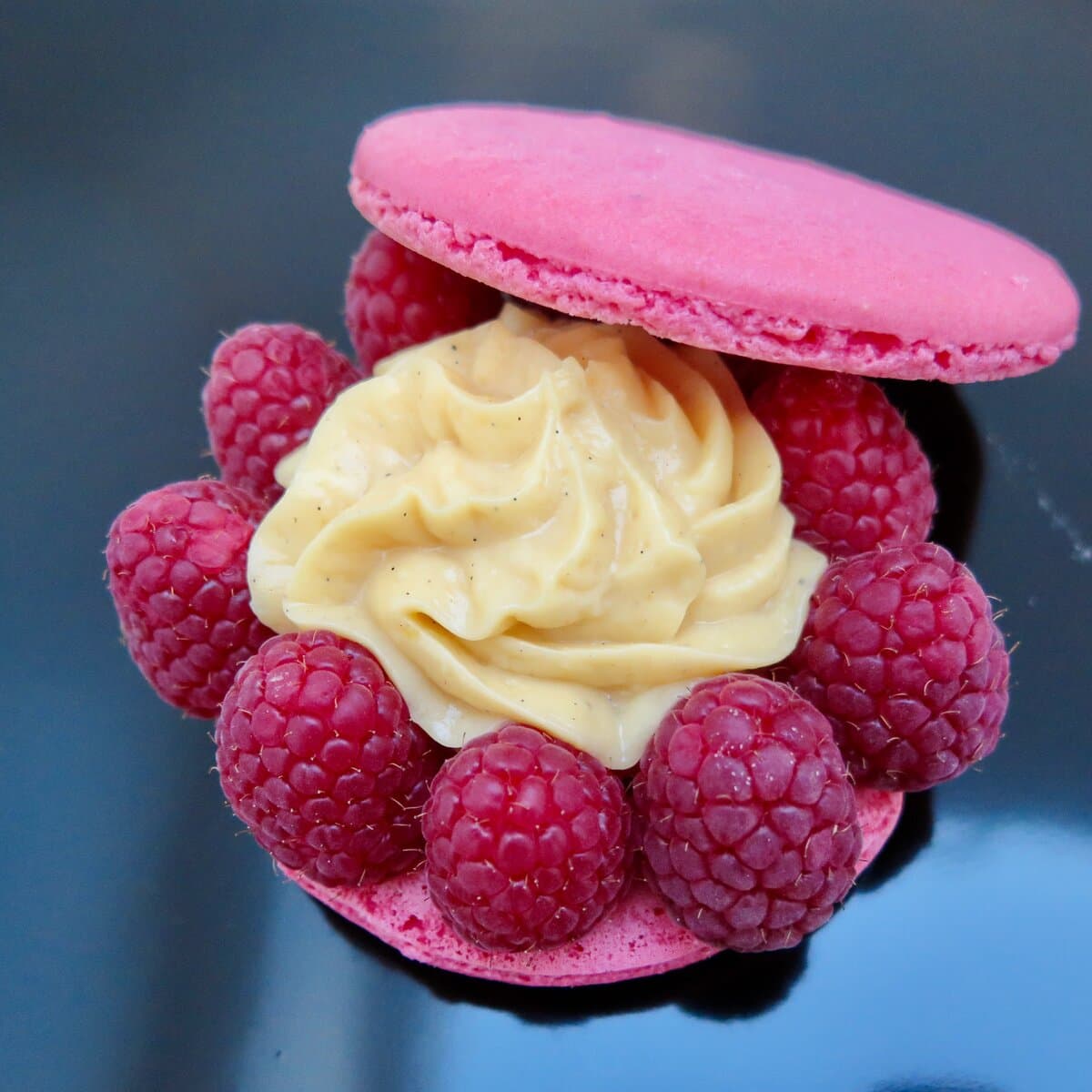 Standing in the buzzing queue of many of Paris’s best pâtisseries, I often realise that decision-making has never been one of my strong points. Well, how can you blame me? With such sumptuous choices to ponder over, there are a number of pastry classics that look up from the shiny museum-like glass counters, saying “Go on – don’t forget me! Pick me!” 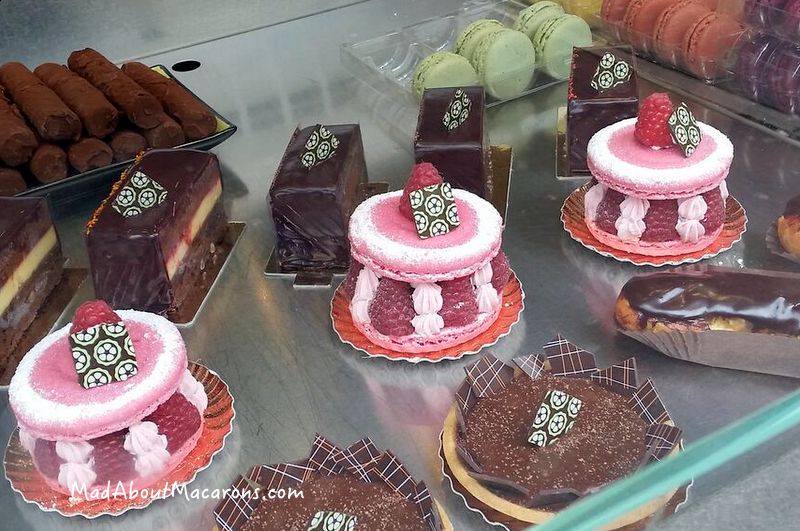 Admittedly, picking one or two out has become quicker, thanks to taking around eager testers on my previous chocolate and pastry tours around Saint-Germain in Paris. What a responsibility it can be to choose a wide enough variety of fabulous samples without them all floating off into a sugar coma.

One of the lighter popular classics is a giant pink macaron garnished with pastry cream and surrounded with fresh raspberries. What’s more, it’s gluten-free. However, it’s not that easy to cut up into sample pieces! 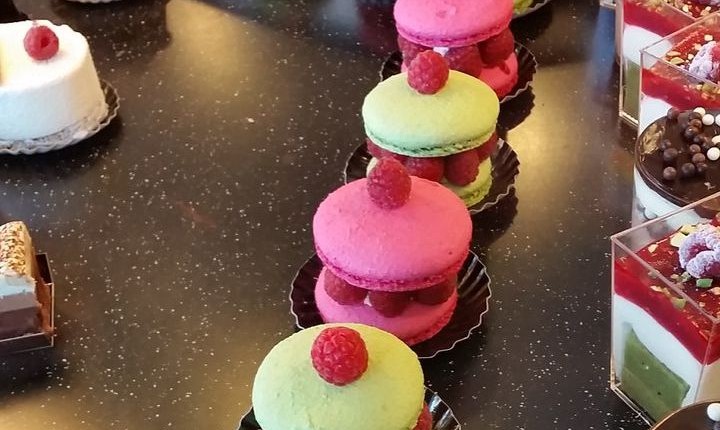 Pierre Hermé, dubbed by Vogue Magazine as the Picasso of Pastry, christened the most famous of giant raspberry macarons the Ispahan, named after a tender, fragrant Iranian rose. The giant pink macaron is filled with a rose and lychee cream and finished off with beautiful fresh raspberries. See more on the story of the Ispahan with raspberries and rose.

So many pastry shops in Paris have drawn on his inspiration with their own take on it. Even our local pâtisserie had their version (above) with the bottom macaron shell upside down… 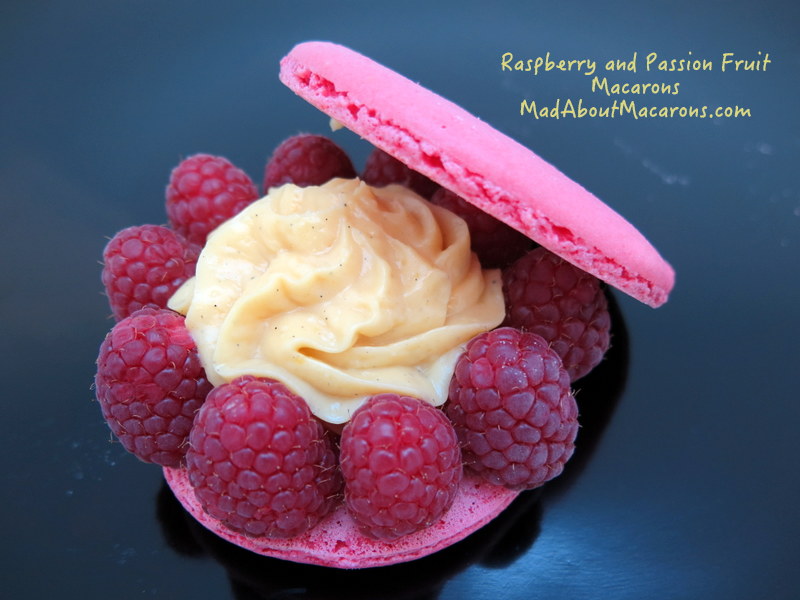 As you can imagine, such Parisian pâtisserie temptations are a constant source of exciting inspiration.  For this dessert classic I replaced the lychee and rose with a zingy passion fruit filling, adding that extra acidic touch to the raspberries.

Speaking of passion fruit, have you tried the passion fruit and lemon meringue tartlet recipe from Teatime in Paris yet? My lovely friend, Christina, of Christina’s Cucina has just made them and posted the sample recipe! 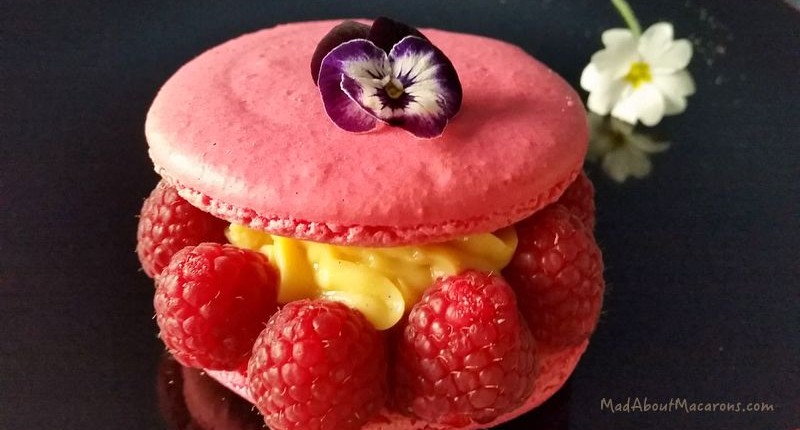 I used the basic macaron recipe in “Teatime in Paris” adding a pinch of deep raspberry pink powdered colouring (if using “Mad About Macarons”, use the measurements specified in the Annex of the book, under “Egg White Reference Chart” based on 100g egg whites).  This will make 12 large macarons.  The filling is based on a classic pastry cream (recipe also in “Teatime in Paris”) but I’ve adapted it here based on the liquid of the passion fruit.  Don’t forget that macaron shells can be frozen, so I often prepare them in advance and defrost them the day of a dinner party and the rest is easy to put together. 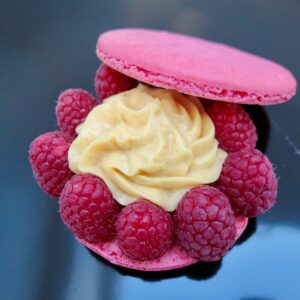 How to make the most delicious passion fruit cream filling for giant raspberry macarons. An egg yolk recipe for macaron lovers.

The step-by-step recipes for macaron shells are in both my books, Mad About Macarons and Teatime in Paris.
Share this recipe