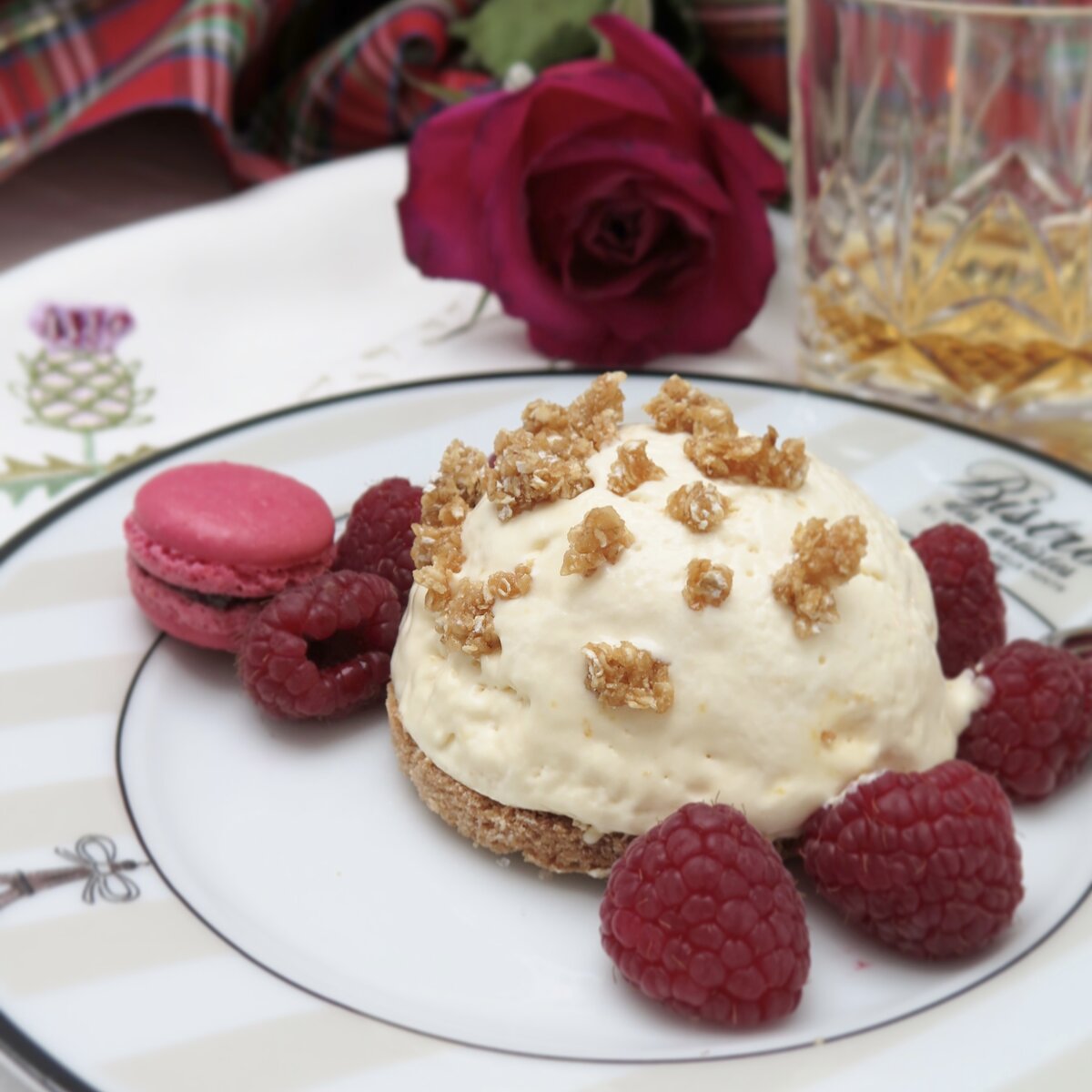 What is Scottish Cranachan?

The Scottish Cranachan is a dessert originally served to celebrate the summer harvest festival. For Scottish celebrations such as Saint Andrew’s Night and Burn’s Night, however, it’s more than likely you’ll see this on the dessert menu.

No matter how much people say their raspberries are better, there’s nothing to beat fresh Scottish berries! Even the best French ones don’t match up to them, in my humble opinion. 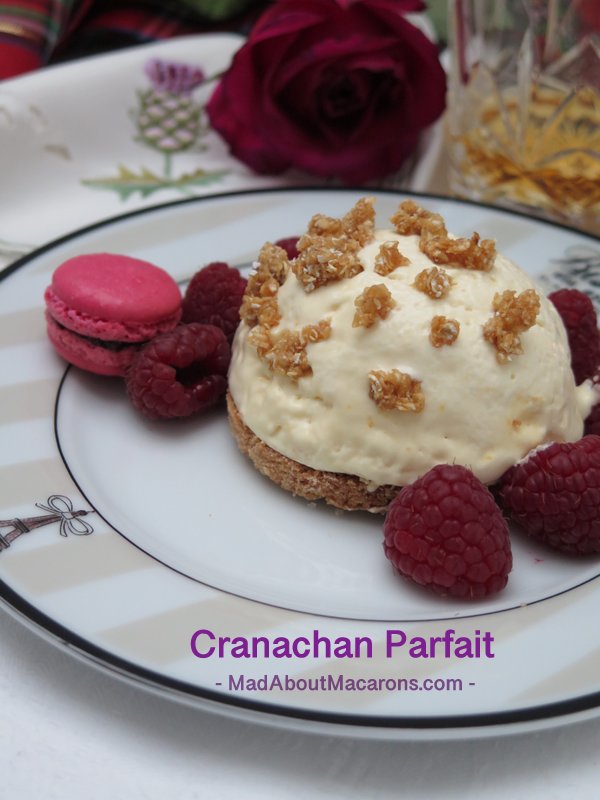 However, when it comes to the major Scottish celebration dinners such as Burn’s Night on 25th January and Saint Andrew’s Night on 30th November, we’re always short for fresh, seasonal raspberries.

Luckily at our local Farmers’ market yesterday, I found some delicious raspberries – from Morocco! Surprisingly, they were full of flavour but as I prefer to buy local and seasonal, the berries are just for show here. Without fresh berries, thinly spread some good quality raspberry jam on the shortbread rounds before placing the Cranachan parfaits on top.

For the parfaits, I took inspiration from Michelin starred chef, Anne-Sophie Pic, who makes a vanilla parfait by making a hot syrup and pouring it directly onto egg yolks and whisks until frothy. She then adds whipped cream and turns it into spherical moulds. Here, I replaced the syrup with runny floral honey (ideally in Scotland, use heather honey) and since I was adding Whisky to the cream, doubled the portion of egg yolks in order for it to solidify more in the freezer, even although they will still be beautifully soft.

If you prefer a stronger-in-alcohol Scottish dessert, then try this non-churn Drambuie ice cream, delicious with chocolate ginger fondant cake!

Although made the night before, the parfaits can keep in the freezer for up to 10 days, so it’s parfait to prepare this dessert in advance.

I’ll post a separate recipe for Shortbread later – as my Granny’s Black Book of recipes contains several! Here I’ve used one of my favourites which uses more butter and, once the Shortbread is still warm and soft out of the oven, just cut out disks the same size of moulds.

Can I make this Scottish Dessert without the moulds?

No moulds? No worries. This Cranachan Parfait recipe doesn’t have to be made using moulds.

Make it easier by placing the cream into a cake tin lined with parchment paper and freeze as a whole block, cutting off slices when ready to serve.

Add the Crunch with Oat Praline

Instead of oatmeal for the traditional dessert, soaked in Whisky overnight, I’ve made a simple praline with porridge oats to add some crunch for the texture. If you love crunchy praline on desserts, try this nutty nougatine recipe.

Want to go the Full Monty? Serve with Cranachan Macarons, the recipe of which is in my first book, Mad About Macarons.

If you would like to try the classic, more traditional recipes for Cranachan, see my Scottish friends’ recipes, from both Christina’s Cucina and Janice’s Farmhouse Kitchen version, based on a Whisky Mac. 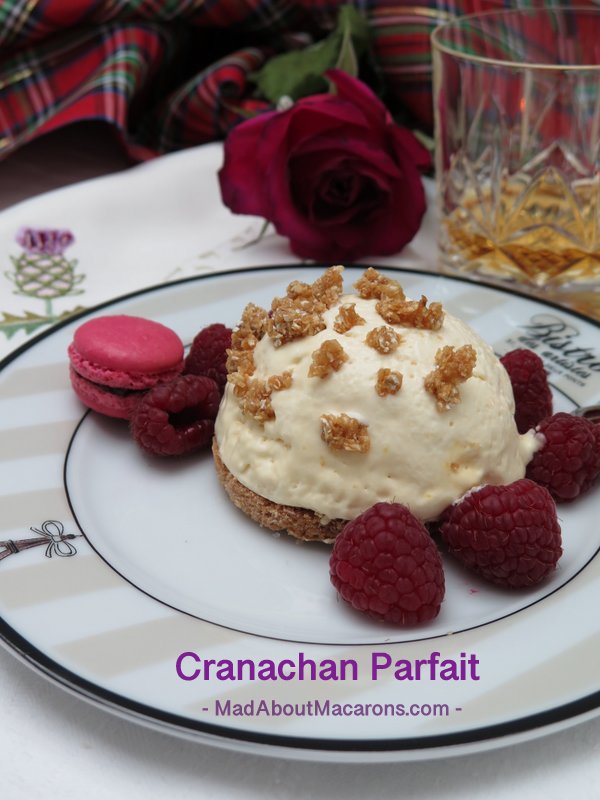 Cranachan Parfait, a French twist to the Classic Scottish dessert

If you prefer to make this a gluten-free dessert then replace the shortbread with a giant pink macaron. There’s a whole chapter about giant macaron desserts, also in my book, Mad About Macarons!

Enjoy this for any Scottish occasion, or at any time of the year and ideally serve with a good single Malt Whisky.
Just add blueberries if wanting to be patriotic for a red-white-blue dessert.
Incidentally, the Gaelic word for cheers translates as Health, just like the French. Cheers, Santé, Sláinte !

P.S. This is part of the egg yolk recipe database, as it uses 4 yolks.  Keep the egg whites for 3-4 days in a clean jam jar in the fridge (or freeze until ready to bake) to make macarons, financiers, tuiles or meringues from my books and le blog! 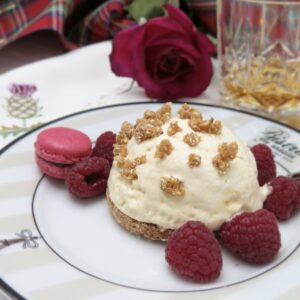 This recipe can be made even easier without the moulds or shortbread. Simply freeze the honey and Whisky cream in a lined cake tin overnight and slice before serving. Serve with the oat praline and fresh raspberries. Store the egg whites in the fridge for 3-4 days and make macarons or financiers with them (recipes in my books) or these French Tuiles. Otherwise freeze the whites until later!
Share this recipe

Anything with oats I find intriguing so I can’t wait to make this. Making them using the moulds is a treat too. I might make this today. It looks so delicious.

Thrilled you’ll be making this, Bea – and just in time for Burn’s Night!

Your talents impress me so much! Although I’ve actually made cranachan, but not like this! Beautiful presentation.

You are so kind. Thank you, Mimi. I just wanted to try something a little different… hope you try this. The beauty with the parfaits is that you can make them ahead of time – the shortbread too.

Love, love, love this twist on Cranachan, Jill! My mouth is salivating just thinking about all the different flavors and textures here! That oat crumble alone is calling my name! Will have to try this as I’m sure my whole family would love it, too! Great recipe and thanks for linking back to mine! 🙂

It’s a pleasure, Christina. Thanks so much – hope you make the recipe. Hugs to the family!

Some mac inspiration for pink October