Easy recipe for Black Sesame Ice Cream, a Japanese favourite treat. What is in it? It’s made with black sesame seeds (powdered or paste), milk, egg yolks, cream, sugar and salt. It tastes like peanut butter but it’s much healthier. Serve with sesame tuiles, yuzu or lemon macarons for a French touch. 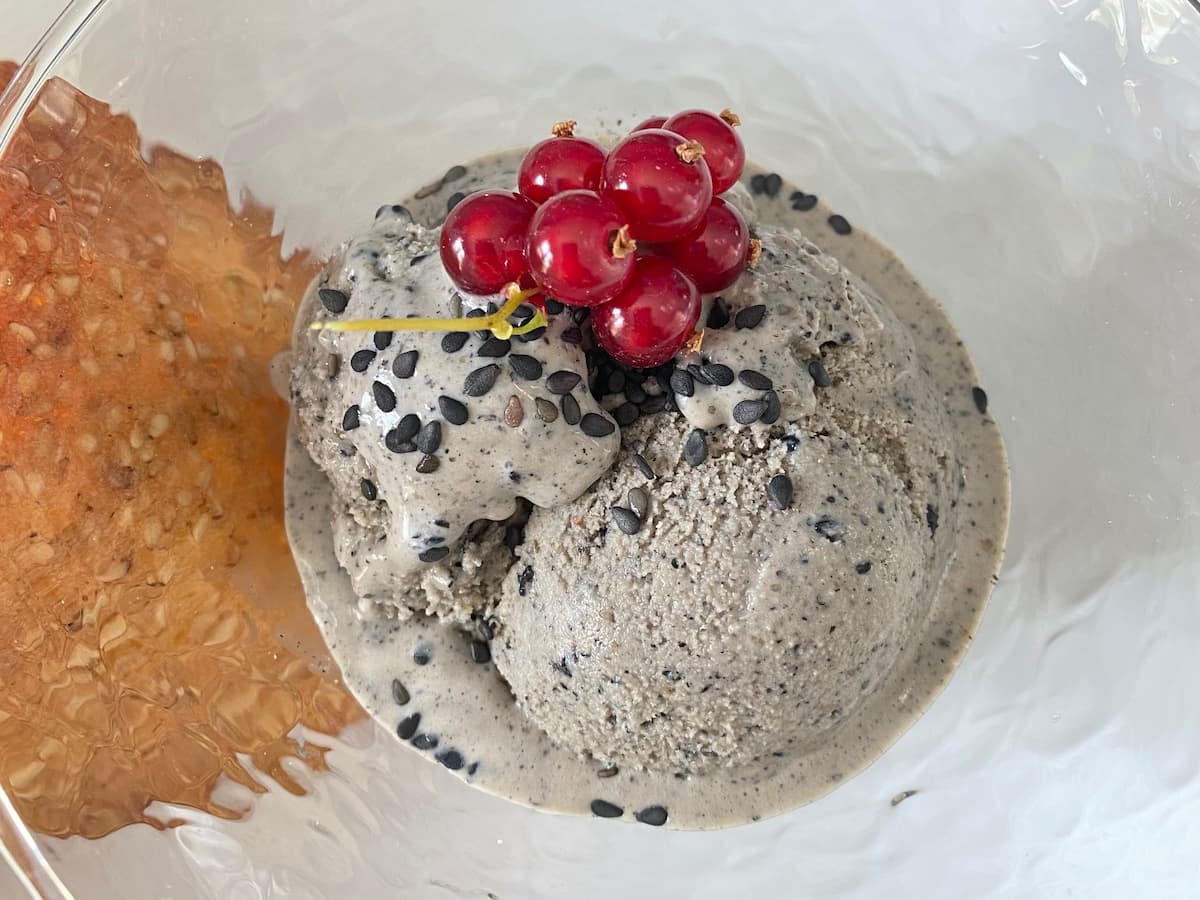 After tasting the most popular Japanese ice creams on our family trip to Japan, our favourite choice was Black Sesame Ice Cream.

One or two spoonfuls of this light yet creamy dark nectar has the same kind of addictive reaction that you’d get from eating a spoonful of slightly salted peanut butter. Yet it’s not peanuts, of course – but who would have thought that black sesame seeds made into ice cream could be this good – and healthier too!

How to Say Ice Cream in Japanese

We love the Japanese word for ice cream. It looks complicated at first glance but just say this out loud:
AISUKURÏMU. My daughter, Lucie, is still trying to work on me saying it right!

I’m the biggest ice cream fan when it’s homemade; even more so during a heatwave like it was this summer in Japan – and now, mid September, it’s back to ice cream weather in Paris this week with 29°C/84°F temperatures!

Such a dark grey colour of ice cream perhaps doesn’t look that aesthetic, does it? Neither does my black sesame version look particularly like ice cream as it melted pretty quickly in this heat. Although, personally, this is how I prefer it – do you?

What I didn’t realise when I took this photo, is that the black sesame ice cream hidden underneath would be our favourite. With all the hype on the Matcha flavours, I almost felt embarrassed to prefer the Black Sesame!

For more about our ice cream experiences and the sweeter side of Japan, read about it in my post, Teatime in Japan.

Straight after tasting the black sesame ice cream, we headed to the nearest store to find black sesame.  Antoine and the girls were so inspired and determined we had to make this at home!

So I got to it straight away on return to develop a recipe. Here I used a 70g (2.5oz) packet of pre-prepared powdered black sesame seeds (Surigoma Black by Hokuya) which we found in the Matsuya store in Tokyo’s Asakusu district, next to the Senso-ji temple and near the popular gelateria. It worked well, and was even lovelier when toasting the black sesame in a pan first (see recipe below).

Happily, on return to Paris I discovered the most divine, intense black sesame paste (which is pre-roasted) at Nishikidôri, which makes this recipe even easier, but if you can’t find it, the powder is just as good.

EVEN EASIER: toast whole sesame seeds lightly in a pan to release the flavours , then grind in a food processor or spice grinder.

I also experimented using a little honey, but it really overpowered the black sesame, no matter how little I used.  The family have now unanimously tasted and approved the recipe below: not too rich and lighter with milk rather than just made with cream.

To top it all, black sesame seeds are so healthy too!

Recipes to Use Up the Leftover Egg Whites?

Serve this black sesame ice cream on its own or rustle up some crispy sesame tuiles in just a few minutes using up the egg whites from this recipe!  Here’s the recipe (including a video demonstration) here: Crispy Sesame Tuiles. 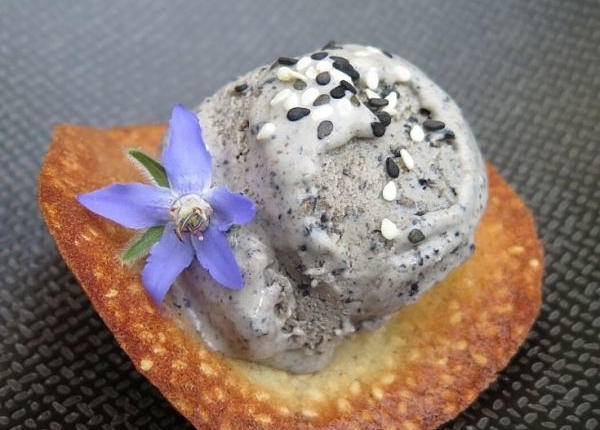 Yuzu’ll also love this with Yuzu Macarons! Sorry for the Scottish joke (can never resist). Needless to say, the ice cream is delicious served with lemon macarons (using the leftover egg whites) – better still, make yuzu macarons!  Just follow either of the lemon macaron recipes in either Mad About Macarons or Teatime in Paris, and replace the fresh lemon juice with yuzu juice, available from Japanese specialist stores. 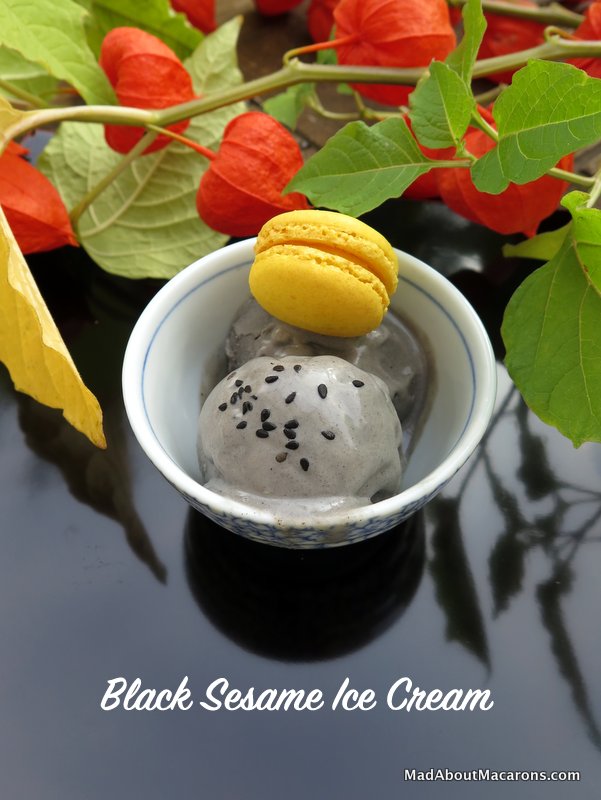 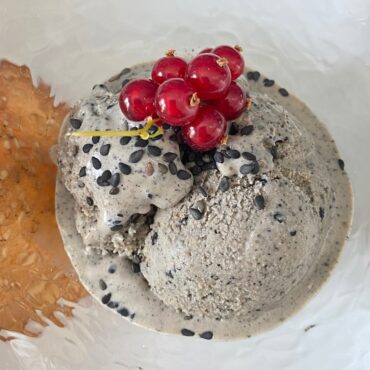 Easy recipe for Black Sesame Ice Cream, a Japanese favourite treat made with black sesame seeds (powdered or paste), milk, egg yolks, cream, sugar and salt. It tastes like peanut butter but it's much healthier.

I recommend using pre-prepared Japanese black sesame paste, as it's already roasted. However, if you can't find it from speciality Japanese stores, it's also great using whole seeds: toast in a pan then blitz in a grinder. N.B. At my local Japanese store in Paris, I learned that black tahini paste is much lighter than the Japanese black sesame paste and just as good. Serve the ice cream on its own or with crispy sesame tuiles (see recipe here - ideal as uses up the egg whites!). Accompanying video HERE on Jill's YouTube channel Jill Colonna MadAboutMacarons.com 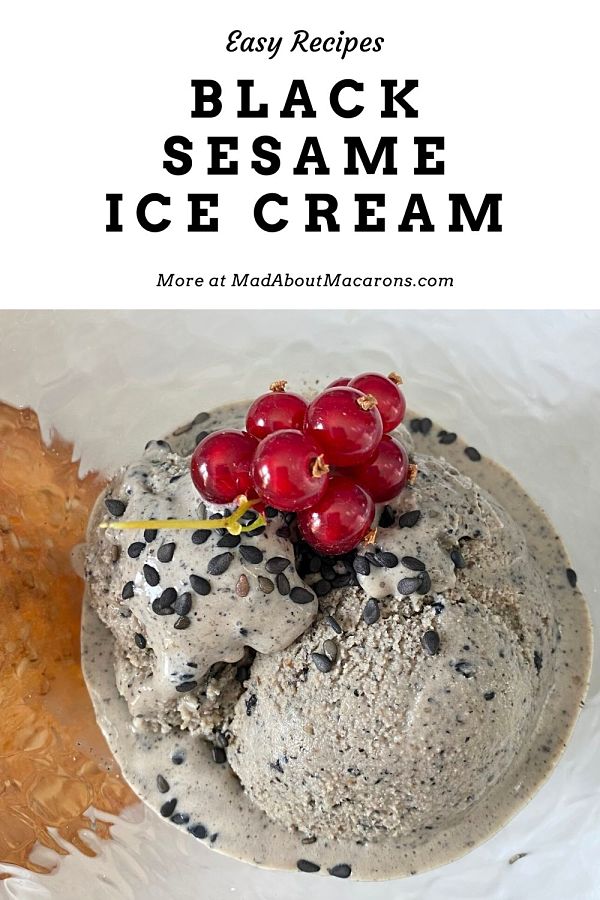 Hi Jill! Thank you for the recipe, it looks amazing!
I often make custard based ice creams but the ratio of milk to cream that I usually use is around 1:2. Is there a reason for using such a large quantity of milk, with only 100ml cream?

Hi Marie – glad you like it. The only reason was to cut down on cream to make it a bit lighter and it works so well – but if you want more cream, then please just use your own ratio.

It sounds so yum! Although it’s still cold outside but I will definitely try it. Thank you for the recipe!

It’s a real pleasure – we love it, even in winter!

I made this today. Superb! Goes well with green tea ice cream. A combo Ive only seen in NYC but doesnt mean it doesnt exist elsewhere!
Seriously, this recipe might get me to buy an ice cream machine (im borrowing a neighbors right now)

That’s wonderful to hear, Bethy. We also had this combo in Japan and can confirm it’s incredible! So happy you like the recipe – hope you’ll try other recipes from le blog.